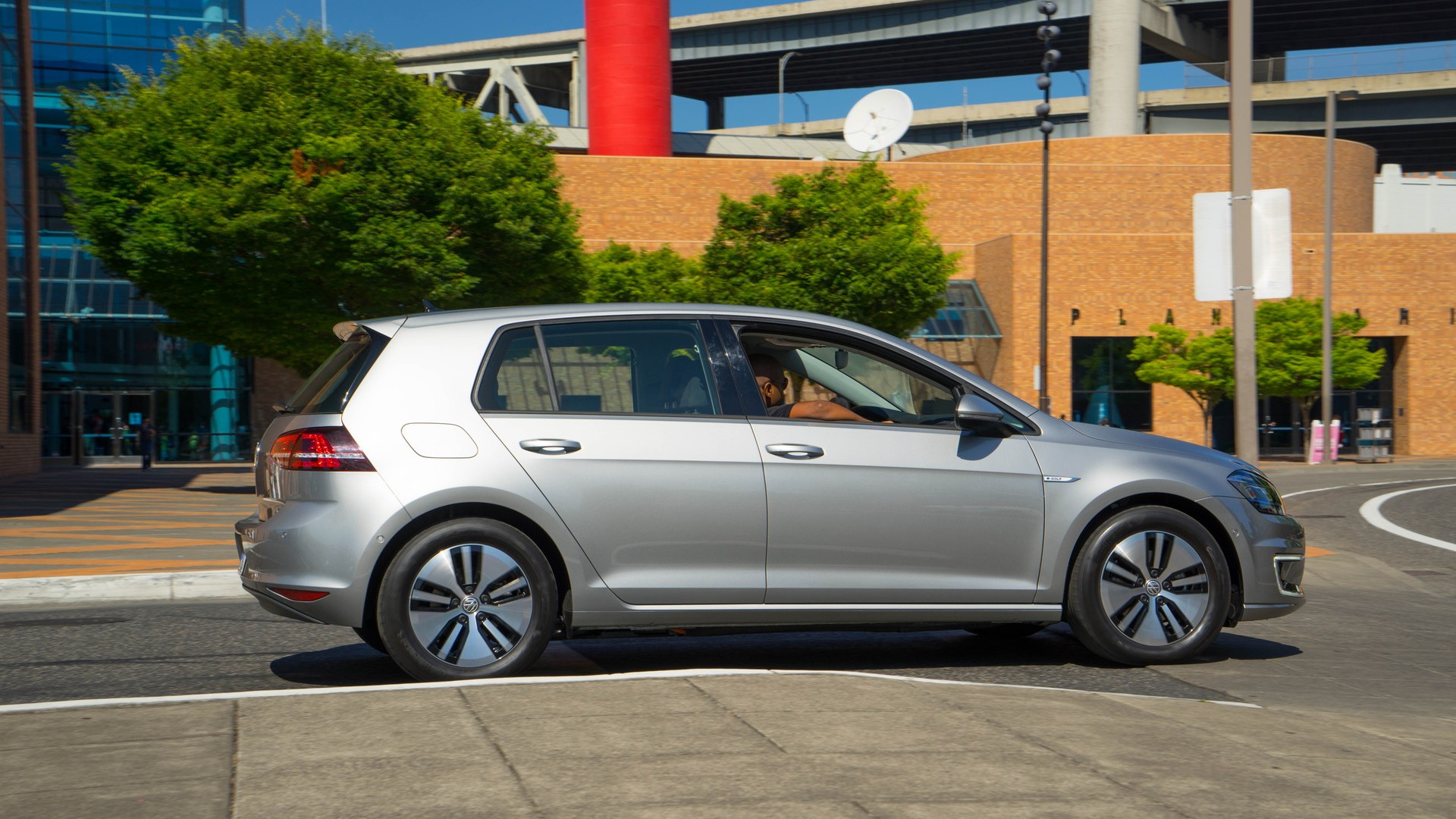 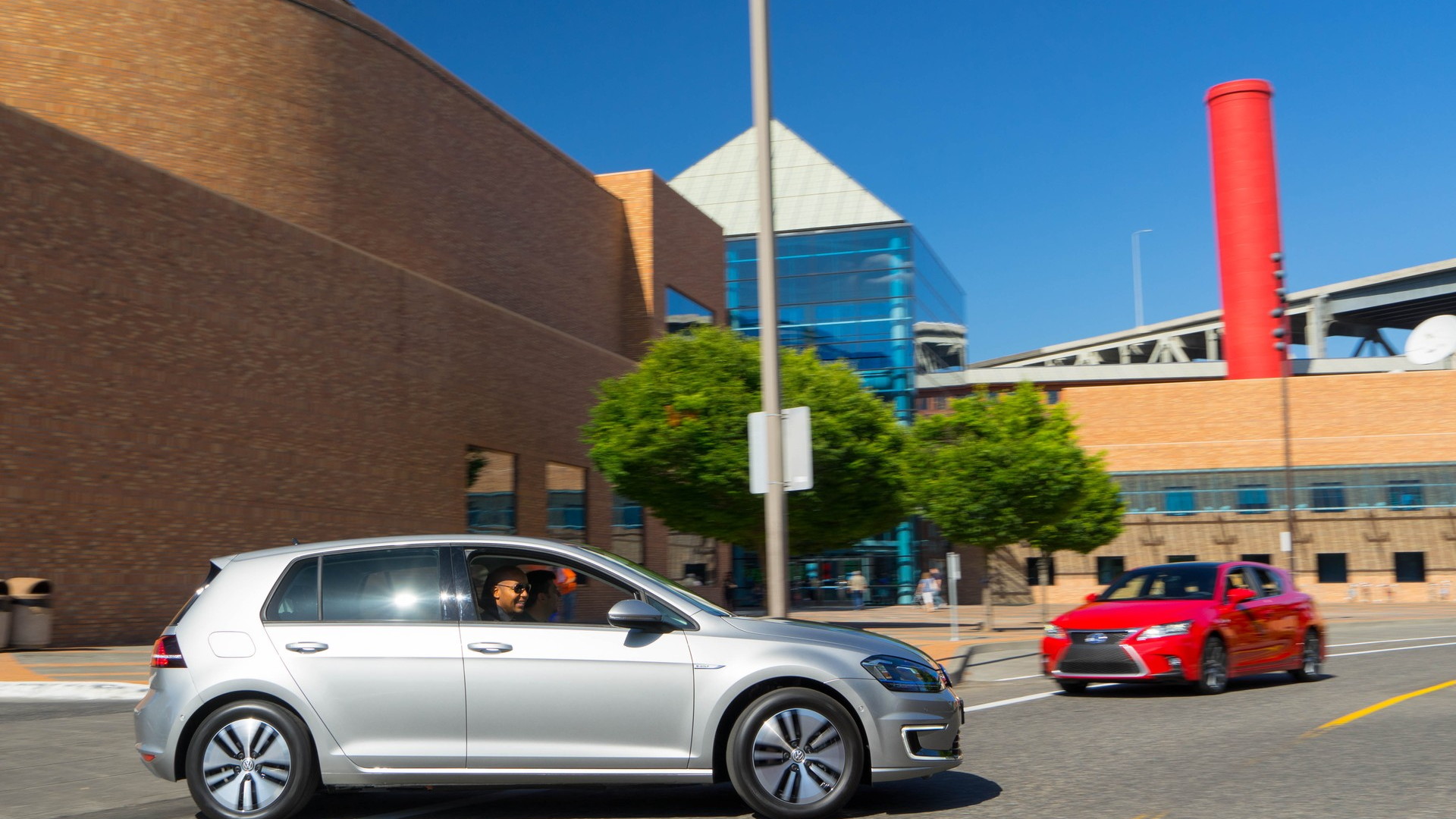 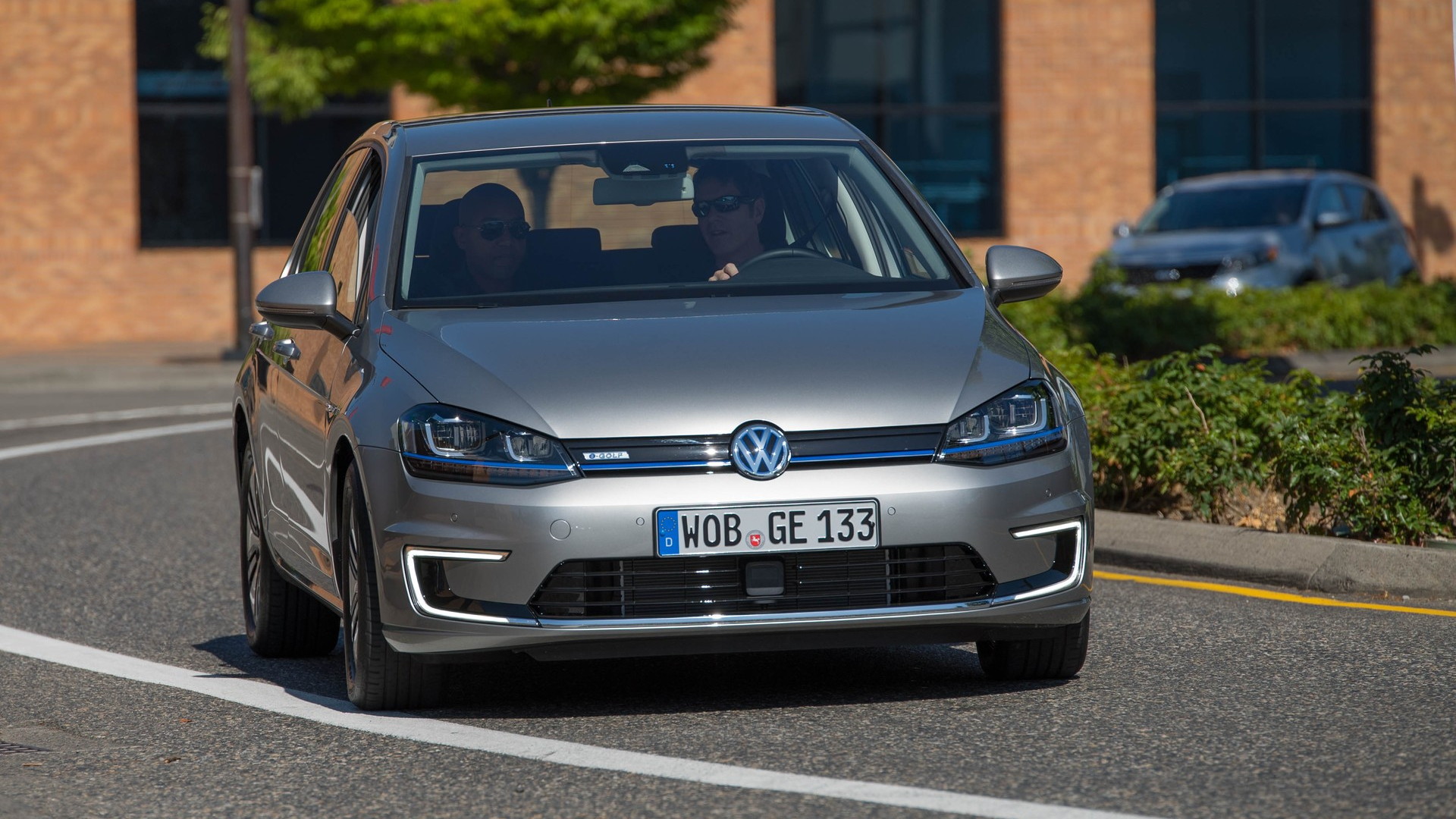 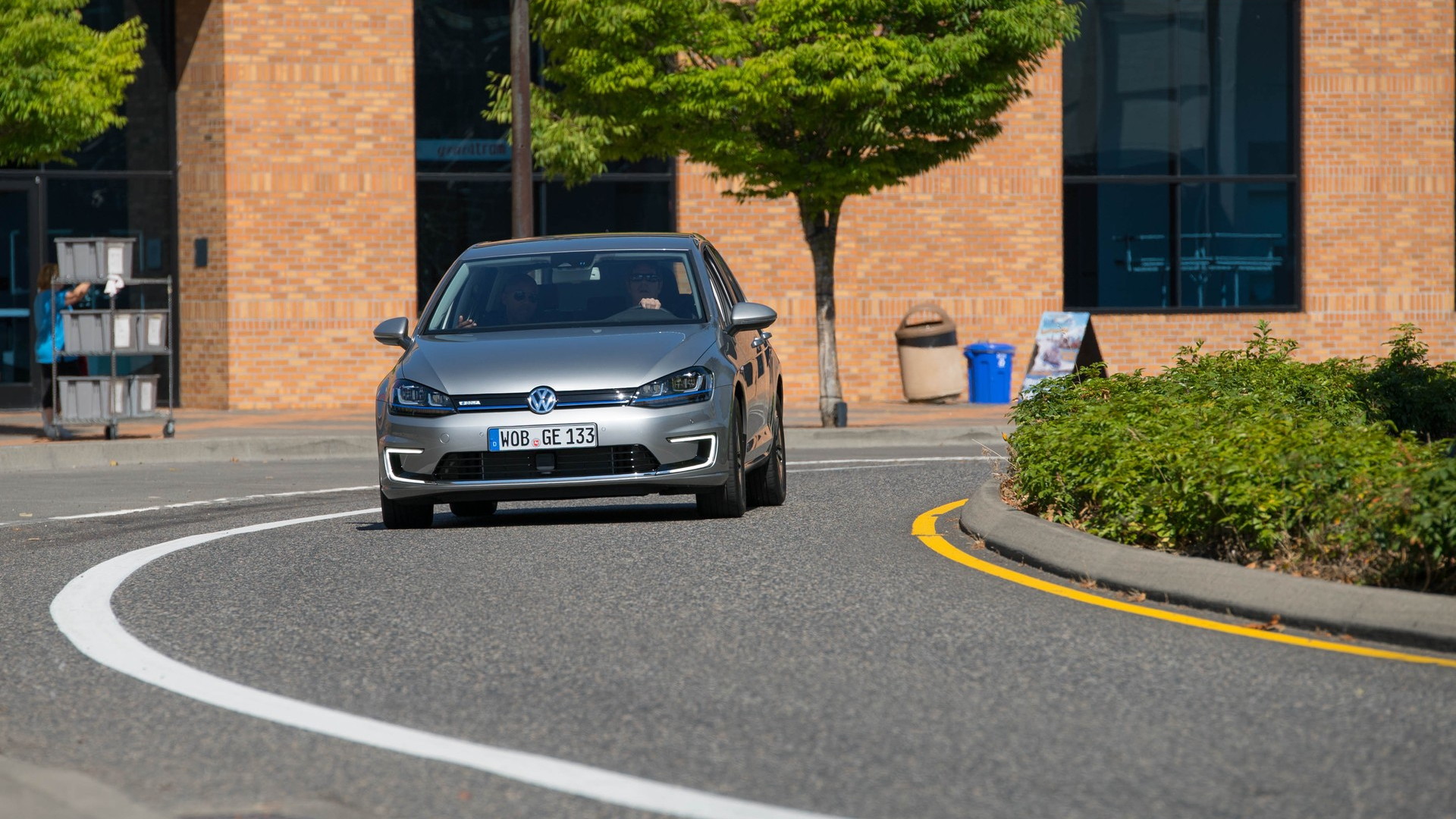 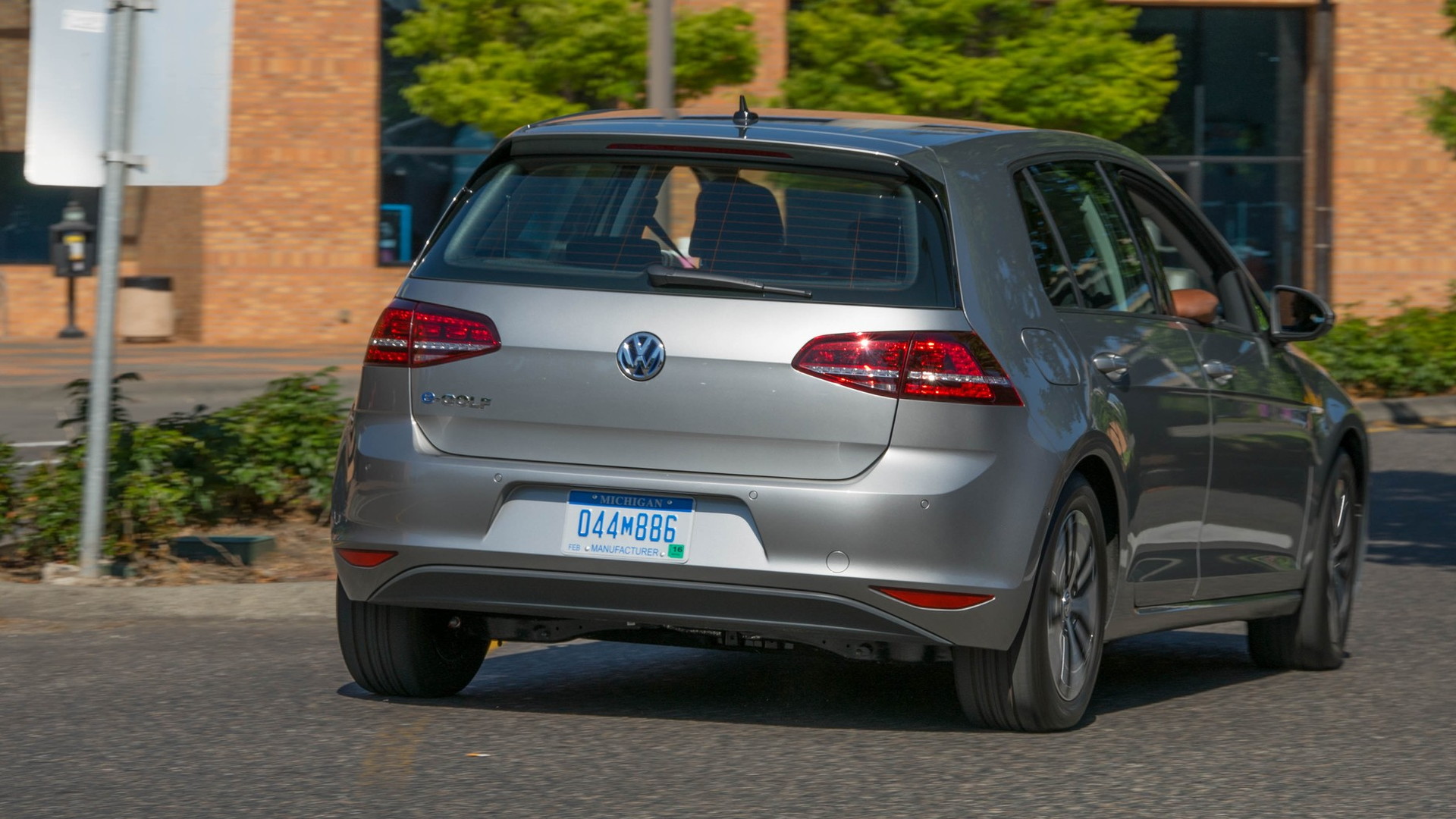 Volkswagen has bet very heavily on diesel, with its TDI models; yet it's preparing to bring its all-electric Golf, called the e-Golf, to the U.S. later this year. And we took another short drive in it this past week—this time on U.S. shores.

The e-Golf, as it will be sold beginning this November, in California, Oregon, and a few other 'select markets,' uses a 115-hp synchronous permanent-magnet AC motor that will deliver up to 199 pound-feet of torque, enabling acceleration to 25 mph in 4.2 seconds or to 60 mph in about ten seconds, and top speed is limited to 87 mph.

Its 24.2-kWh lithium-ion battery, using Panasonic automotive-grade prismatic cells, puts it on the same level as the Nissan Leaf—and real-world driving range should be comparable, if not a bit better. Charge times with the 7.2-kW onboard charger, using a 240-volt wallbox (installed through the official partner, Bosch), are just four hours, or about 20 hours on 120-volt AC. DC fast charging (CCS/SAE combo socket) is standard and can bring the state of charge to 80 percent in less than 30 minutes.

Total weight of the battery pack is just 701 pounds, and the e-Golf's base curb weight is just 3,090 pounds. The pack has been designed to operate at cooler temperatures than some other performance-oriented packs, even at peak load, and since the emphasis of the e-Golf is efficiency, not performance, Volkswagen found that they could dissipate heat (and save complexity and weight) through the floorpan and chassis. If temps are exceeded at the low end or high end, the output is adjusted so as to avoid battery damage.

With all the vitals out of the way, let's get to how the e-Golf drives. In short, it doesn't feel quite as perky as other EVs, or as other Golf models, but it has the same quick, nimble handling, a super-refined ride, and a very quiet interior—as well as the best front seats in any EV thus far, except perhaps the Mercedes-Benz B-Class Electric or Tesla Model S.

Because the e-Golf is built on VW's MQB platform, which was conceived from the start to have a place for battery mounting, there's absolutely no cabin intrusion from the battery. Interior space, seat folding, and cargo space is exactly the same as other Golf models—even the rear seating height and hip point.

Getting into the e-Golf, you notice some of the same interior-configuration improvements we noted in our drive of the 2015 Golf TDI some weeks ago—namely a dash that feels little lower, and seating position that feels higher, adding up to a more open, less confining feel in the front seats, with better visibility sideways and rearward than in the previous MK6 Golf. Inside and out, blue striping and trim remind you that you're not in an ordinary Golf.

You get three drive modes: Normal, Eco, and Eco+. Eco places limits on motor power and torque and limits top speed to 72 mph, and runs the air conditioning in a more efficient mode; but we couldn't feel much of a difference in normal, relaxed driving. Eco+ mode softens accelerator response and puts severe limits on power and torque (74 hp and 129 lb-ft), and it completely switches off the A/C, and gives you a soft 59-mph limit on velocity.

After driving the e-Golf in the other modes and enjoying the lively response, this mode felt like a penalty box; it's sluggish, and some might reserve it only for times when they absolutely have to maximize range. As a backup, in any of these modes, if you do floor the accelerator you do get full power and torque, and the 87-mph top speed; it's quite the contrast.

READ: Tesla's Important Not Only For Electric Cars But For Silicon Valley: Opinion

Paddle-shifters gone, but you can order up more regen

By pulling the shift knob back to 'B' you can tap into the highest level of regenerative braking, and the goods for one-pedal driving some of the time. Tipping the lever to the left or right taps into two other in-between levels of brake regen, to better suit particular hills, or your driving style.

In the prototype Mk6 e-Golf of several years ago, we much enjoyed the steering-wheel paddle-shifters, and we're surprised those didn't make the cut to this car.

EV shoppers are often likely to circle back to the question of driving range. VW cites real-world range for the e-Golf at between 70 and 90 miles, with a maximum range of about 115 miles in ideal conditions. We drove the e-Golf with outside temps nearing 90 degrees Fahrenheit (>32 degrees Celsius), and after 18 miles of driving at the point we got time with it—including some with the climate control on—the test car was still showing 80 miles remaining.

The e-Golf has a heat pump instead of a heater, which should help cut energy use in cold weather. Meanwhile, radiator grille shutters, extra underbody panels, and a rear spoiler are among the elements that helped VW cut the cD for this car to 0.28 and nudge efficiency up at higher speeds. It will also be the first U.S.-market Volkswagen to include energy-saving LED headlamps.

VW will keep to an eight-year, 100,000-mile warranty on the pack, and that guarantees at least 70 percent capacity over that time. Which makes it a longer battery warranty than any other compact EV on the market, according to VW spokesman Darryll Harrison.

The e-Golf goes on sale in the U.S. by November, and we hope to bring you a full road-test review of this model in U.S. guise by then. Our test drive this time was, in full admission, under 10 miles, and we only momentarily exceeded 60 mph.

Until we can further refine that impression, we see the e-Golf as a very interesting second or third car—especially for those who live in charging-friendly West Coast cities. With tuning that emphasizes efficiency and real-world range returns more than some other EVs, it won't be a hotbed for enthusiasm, but it should be a great building block for VW.