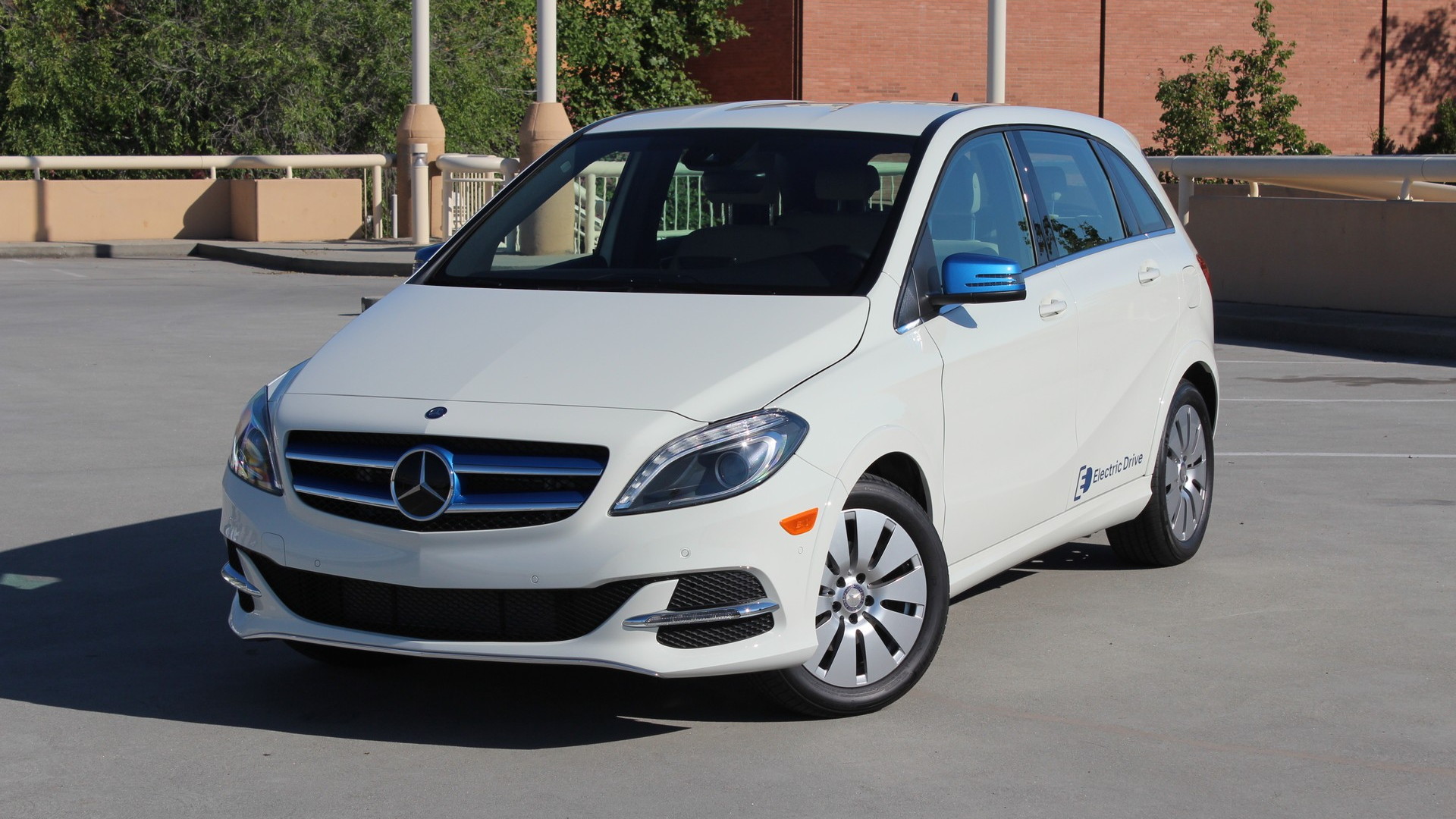 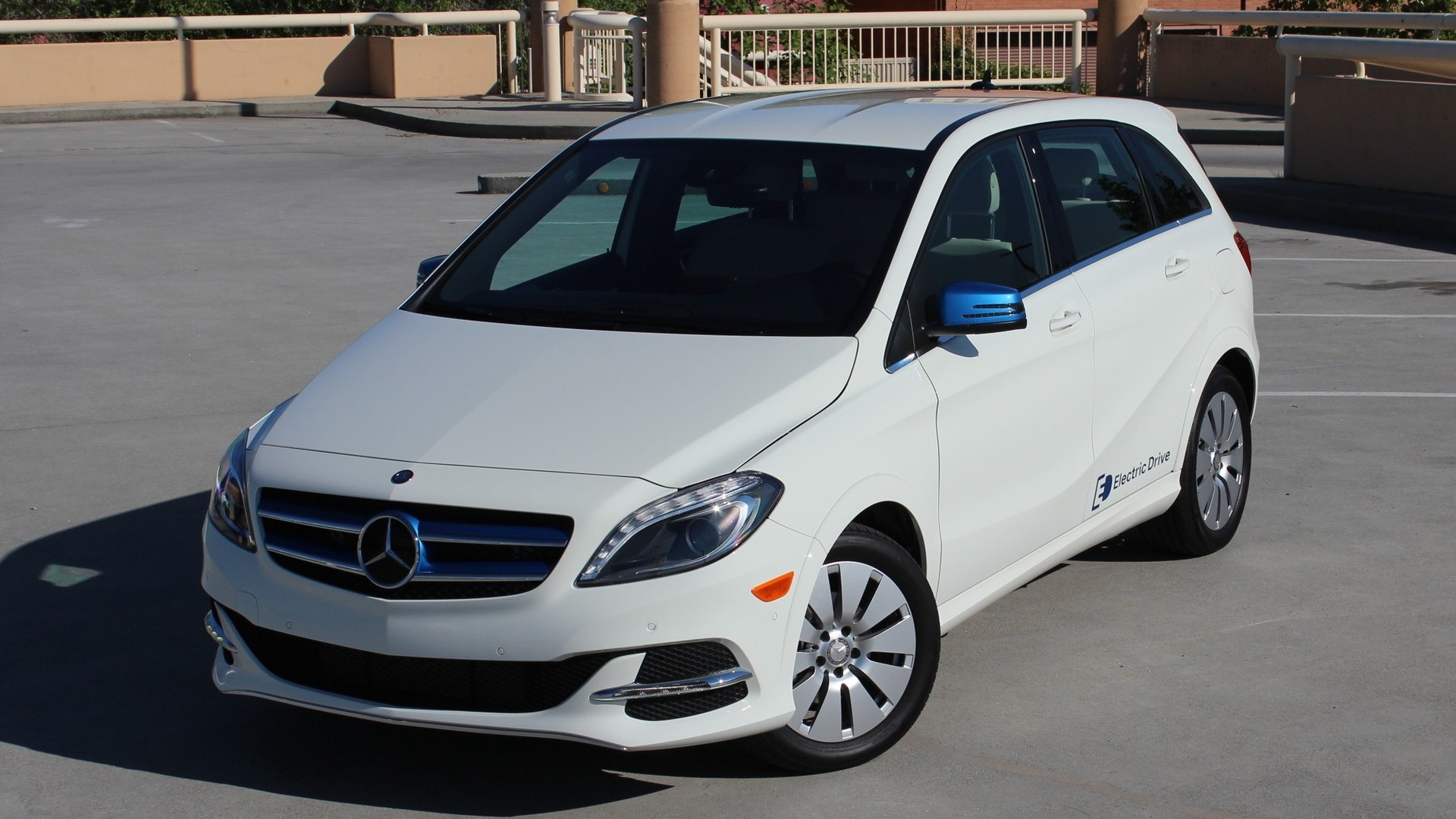 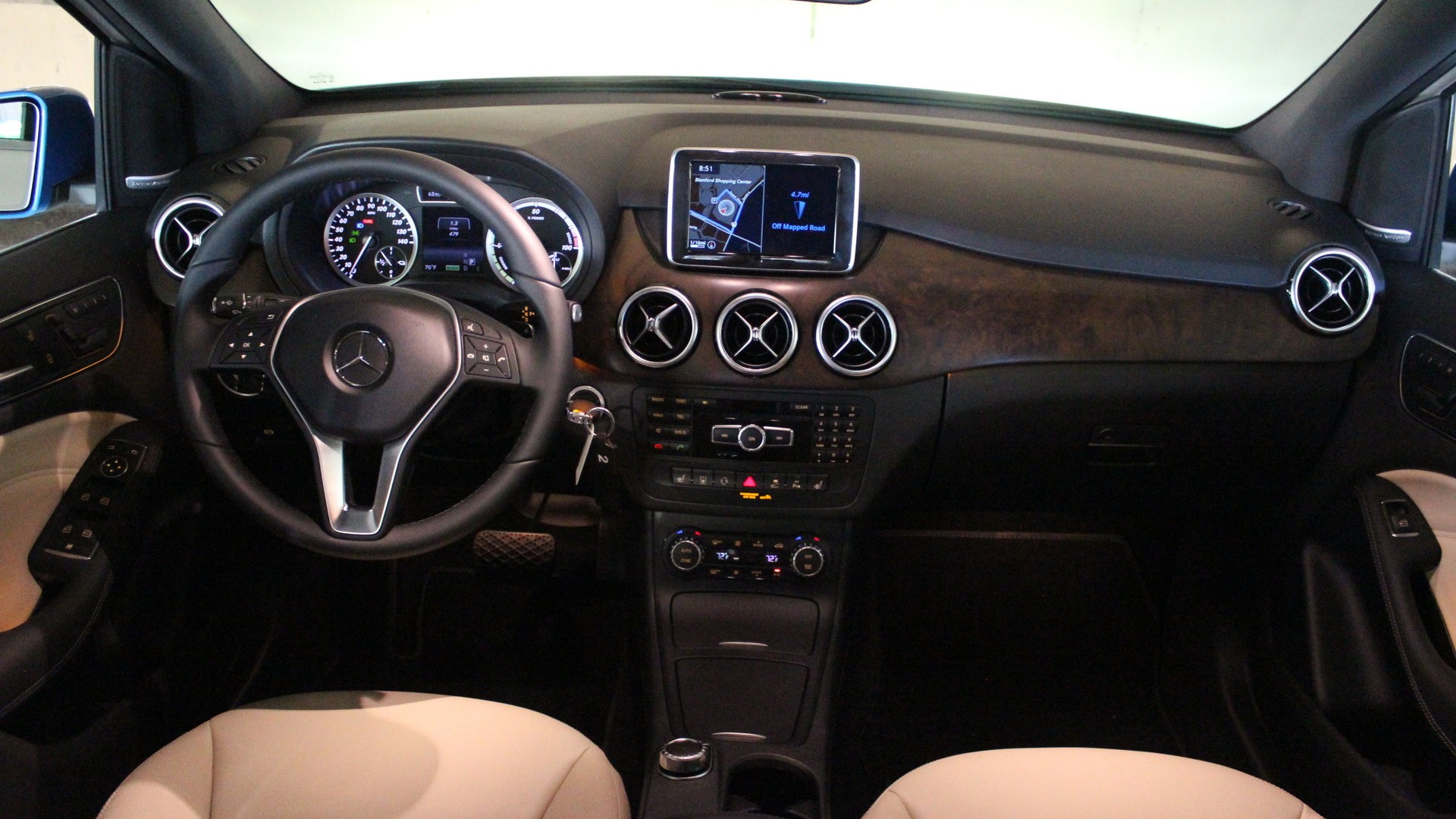 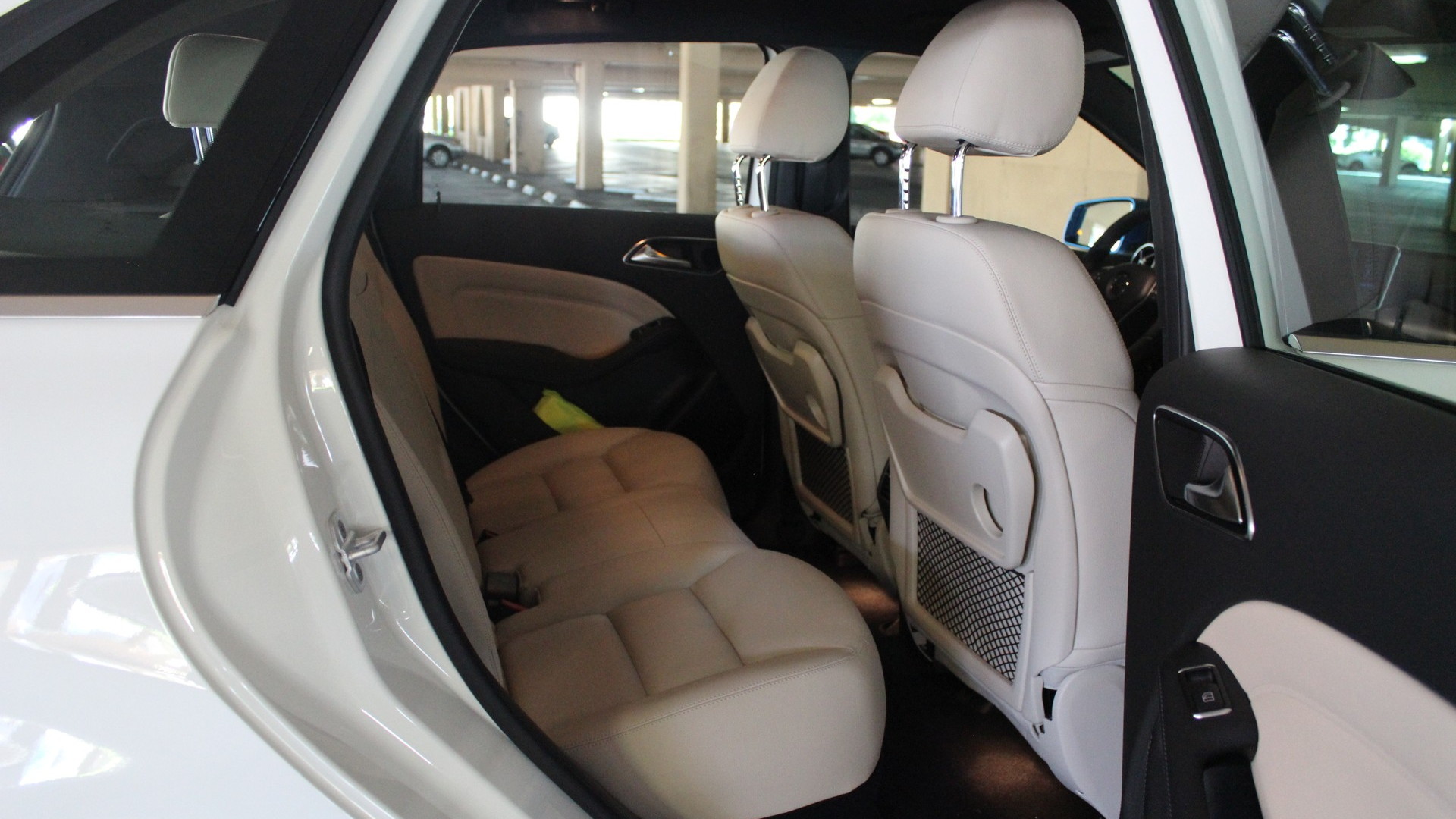 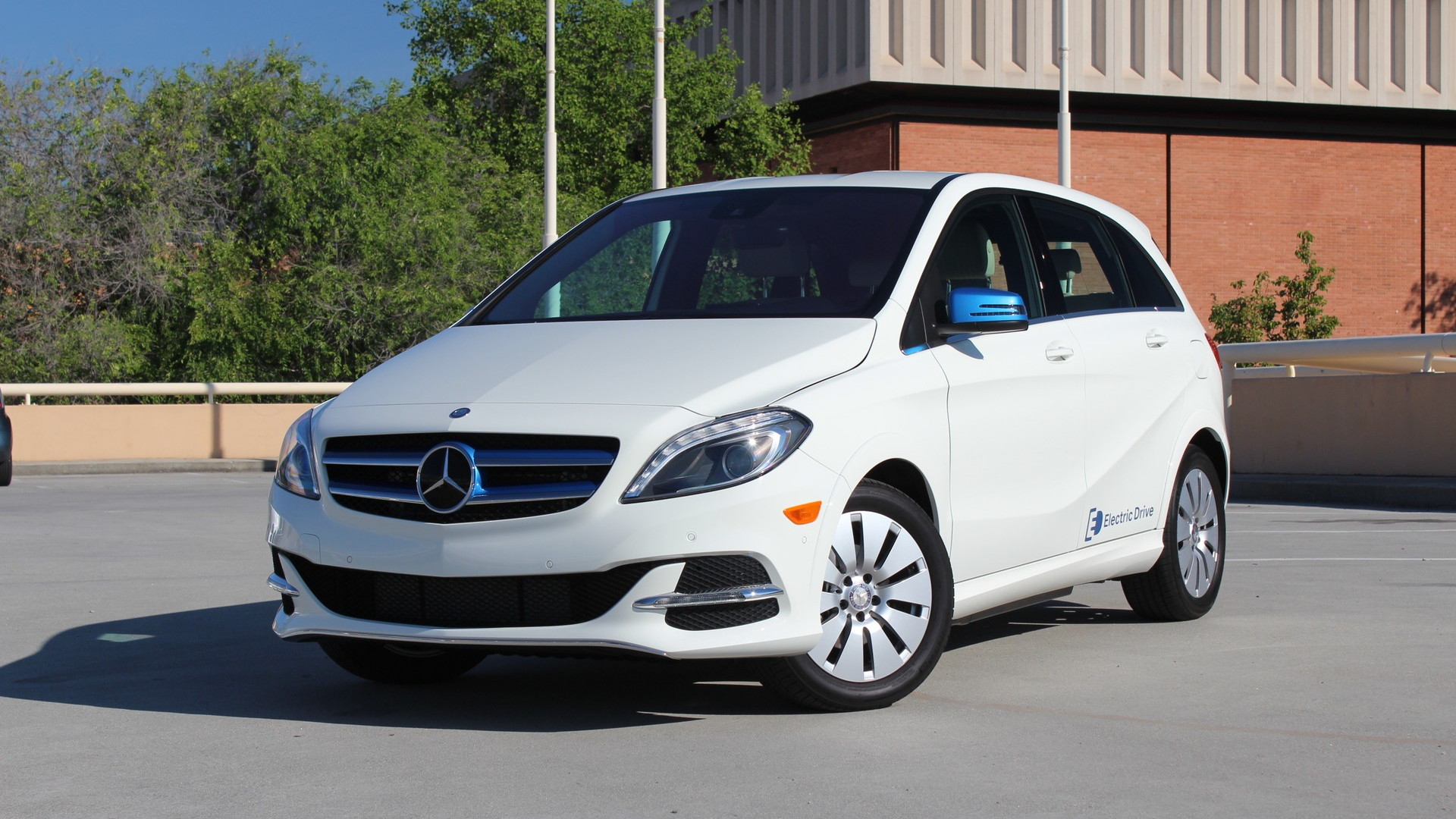 59
photos
Can electric cars be sexy? Look at the exclusive Mercedes-Benz SLS AMG Electric Drive gullwing sports car, and that question has been answered.

But put your sensible cap on for the moment, have a look at the 2014 Mercedes B-Class Electric Drive, and you'll find little of such flirtation.

That's partly because Mercedes has potentially a much tougher mission: to convince American families that an electric vehicle will work for them as a second or third car—and perhaps the one they will drive most frequently, for short errands and daily tasks.

As we experienced last week on our first drive of the electric B-Class, in the San Francisco Bay area, its unassuming, bland exterior is perhaps its least desirable attribute.

It's all better from there, however. With excellent interior space, a quiet and truly luxurious cabin, and a driving experience that feels carefully curated, the Electric Drive is clearly a properly developed electric car--not simply a conversion.

Citing survey data from the Union of Concerned Scientists, Mercedes-Benz notes that 54 percent of Americans drive less than 40 miles a day, and 69 percent drive less than 60 miles on weekdays. And for upper-middle-income families—some of them already having a Mercedes-Benz product in the garage—going electric for a second or third car is a no-brainer.

'Very logical,' yet as luxurious as any other Mercedes

In keeping with that, practicality and usability were top concerns, according to Jürgen Schenk, who oversees electric vehicle development for Mercedes-Benz and Smart. The goal was to achieve a vehicle that was “very logical” yet luxurious.

Just like the Ford C-Max, which is about the same size on the outside, the B-Class has a rather long (106.3-inch) wheelbase and the tall, softly arched roofline that altogether hints that this is a vehicle prioritizing passenger space and interior versatility. And it absolutely wows on the inside, with an airy cabin that allows lots of headroom, great ease of entry, and a back seat that works for adults. From the inside, it feels a class larger than it is, and if you're cross-shopping a lot of vehicles it might leave you staring at the BMW X1 in disgust of wasted space.

And inside, the B-Class doesn't look out of place one bit in the Mercedes-Benz lineup; it has the same familiar layout, with a low instrument panel, elegantly trimmed with rounded vents and a 'floating' infotainment screen with the COMAND interface.

The B-Class is built on essentially the same vehicle architecture as the CLA sedan and upcoming GLA utility vehicle. While the GLA is more low-slung and fashionable, the B-Class is more of a conventional people-mover—a non-outdoorsy crossover wagon, ideally laid-out for those who dwell mostly in the city and suburbs. Seating heights for the B-Class are a little higher, and the B-Class' 'semi-sandwich' floor layout allows a safe space for a large battery pack while only giving up a flat-folding cargo floor.

Almost enough Tesla to be called a Model B?

And here's where it gets even more interesting: That battery pack, officially 28 kWh, and the 132-kW electric motor system (controller included) are supplied by (and were co-developed by) Tesla Motors (they're built in a designated area of Tesla's Fremont, California, factory, of the same familiar Panasonic cells). Those components are shipped to Daimler's assembly plant in Rastatt, Germany, where B-Class models are assembled; and the Electric Drive models are assembled there alongside their gasoline and diesel counterparts for the European market (for the 'body in white,' only a few welds are different, with just five body-structure pieces slightly different). Calling it a Tesla Model B might be a bit much...nevertheless it's an interesting pedigree.

Under the hood, the motor assembly is compact, yet if you've seen the configuration in some other electric cars, it takes up a little more space than you might expect. The controller is located down low in the front, and a single liquid-cooling system moderates temperatures for the motor and battery pack. And the motor is placed in a way that actually uses the same engine mounts as the gasoline engine. To paraphrase the engineer: If it works, why not?

Curb weight for the B-Class Electric Drive is more than 3,900 pounds—definitely on the portly side for this kind of vehicle, and a whopping 1,300 pounds more than the BMW i3 or 600 pounds more than the Nissan Leaf (both conceived to be battery electrics, admittedly)—but that doesn't seem to get in the way of comfort or drivability in any way. As we noticed right away when we set out driving, that curb weight and long wheelbase contribute to this tall hatchback’s settled ride and sense of poise.

At first assessment, the B-Class feels tuned to fit right in with the conservative end of Mercedes-Benz's car lineup. So it was surprising that as we headed what we thought was too enthusiastically into a series of switchbacks, the B-Class didn’t complain—there's less lean than expected from a tall hatchback such as this, and excellent steering weighting.

But the calibration feels entirely Mercedes-Benz. As with Mercedes models for decades, the B-Class has 'E' and 'S' modes for the powertrain. While 'E,' for efficiency, provides a soft accelerator tip-in and a nice linear reaction to your right foot, you need to press farther to get the kind of snappy responsiveness that's tuned into some electric cars (no complaint there, as it's easier to drive efficiently).

Switch over to 'S' and you get the more aggressive response in that first half inch on the accelerator. Additionally, you need to go past the accelerator-pedal detent (like the 'kickdown' position in an automatic-transmission car) to get all 132 kW of output in 'E' (up at the detent you get 98 kW, then the full amount is delivered with a sudden surge), whereas with 'S' mode, you get not only a more aggressive calibration but the full 132 kW right at the detent—no need to 'kick down' past it.

And the Electric Drive is quick, whether you're going by family-car standards or small-car standards; 60 mph happens in just 7.9 seconds, and for those first 30 or 40 mph you could give some sportier cars a good run if you wanted. Top speed is limited to 100 mph—electronically limited.

With the available Radar-based Recuperation System, the B-Class offers four levels of regenerative braking: D (Drive), D+, D-, and D-Auto. D-Auto ramps up the regen depending on how close you are to a vehicle ahead, the slope of the road, and your driving behavior, while D+ provides less regen—a full ‘gliding’ experience, really—and D- gives more regen.

Even in D-, it’s still not anything close to the one-pedal driving that’s offered in some EVs like the Tesla Model S, though, which left us wishing for a ‘D--‘ setting. While you're driving, you can click through the three regen modes with the paddle-shifters, or hold them down to access D-Auto.

In the B-Class ED's 'E' mode, in its default setting with the D-Auto mode, the B-Class drives like a 'normal' car—a car that those who aren't driving enthusiasts will find easy to drive. The B-Class here isn't jumpy or gimmicky. It responds in a nice, predictable way.

Another goal of the Electric Drive was to bring a 200-kilometer (approximately 120-mile) range to this vehicle.

While that doesn't show in the Electric Drive's official 85-mile EPA rating, it might well be possible driving with some 'hypermiling' techniques, including very smart use of the climate control, gradual acceleration, and controlled speeds.

What we saw in the most ambitious portion of our first drive was promising. After driving very inefficiently, up to a ridge and through a series of winding roads, running the air conditioning the entire way, we still saw nearly half of our charge remaining after around 55 miles.

No fast-charging, but a trick or two

There's a little trick, however. If you check the box for the so-called Range Plus option, you open up an extra 3 kWh of battery capacity—temporarily raising it to 31 kWh, to allow an added range of approximately 15 percent (about 8 miles, although Mercedes-Benz says up to 18 miles under ideal conditions).

That added capacity is 'activated' by pressing a physical button on the dash before you charge the car.

The feature is meant for occasional use, Mercedes says, and it won't affect battery life or the car's efficiency; it also isn't included in the official range figures. As part of this package, the Electric Drive will also gain an electric windshield and increased thermal insulation in the doors.

Mercedes will offer a Battery Energy Plus warranty, which guarantees against defects and loss of capacity (no more than 30 percent lost here), and brings no-cost maintenance and roadside assistance—all for eight years or 100,000 miles.

Otherwise, you won't be taking any electric highways as you could with a fast-charging-equipped model like the Nissan Leaf or Tesla Model S. The B-Class can charge fully in about 3.5 hours, or to 60 miles of range in less than two hours, on 240V. And if you dare charge it on 120V household AC, it takes roughly 30 hours.

A full Connected Car App will allow you to check on the charge status of your car, operate the climate control remotely, check a map regarding where you can go on available range, and see notifications from the car.

The B-Class Electric Drive will be available for lease or purchase, and a home 240V charging unit will be required for those who buy or otherwise wrapped in as part of the lease price. Mercedes-Benz will announce a partnership with a particular charger company by the time the B-Class goes on sale.

Is it a compliance car?

And of course there's one other lingering question: Is the Mercedes-Benz B-Class Electric Drive a compliance car? Mercedes-Benz officials say that it isn't, and that the official company position on this vehicle is that it will make as many as the market demands.

The automaker has negotiated with Tesla to supply as many powertrains to go along with estimated sales (not disclosed) over the remainder of the current B-Class' life span (at least three more model years), while they have the option to negotiate for more if sales are higher than anticipated.

Although full pricing for option packages and standalone extras hasn’t yet been detailed beyond what's here, Mercedes-Benz has released that the 2014 B-Class Electric Drive starts at $42,375.

Mercedes-Benz plans to sell the B-Class Electric Drive only at dealerships in ten California-emissions states beginning this July; then next year it will expand sales to all 50 states. And it's already made sure that all M-B dealerships in the U.S. can support, maintain, and repair the Electric Drive.

Perhaps most importantly, Mercedes-Benz has finally jumped into the electric-car market in a way that we can see entirely meeting the needs of those who already own vehicles from the brand.

It fully lives up to the driving feel and the overall ambiance of what the brand has worked so hard to establish in the U.S.; it feels luxurious and comfortable—supremely so, compared to most of these other small electric cars.