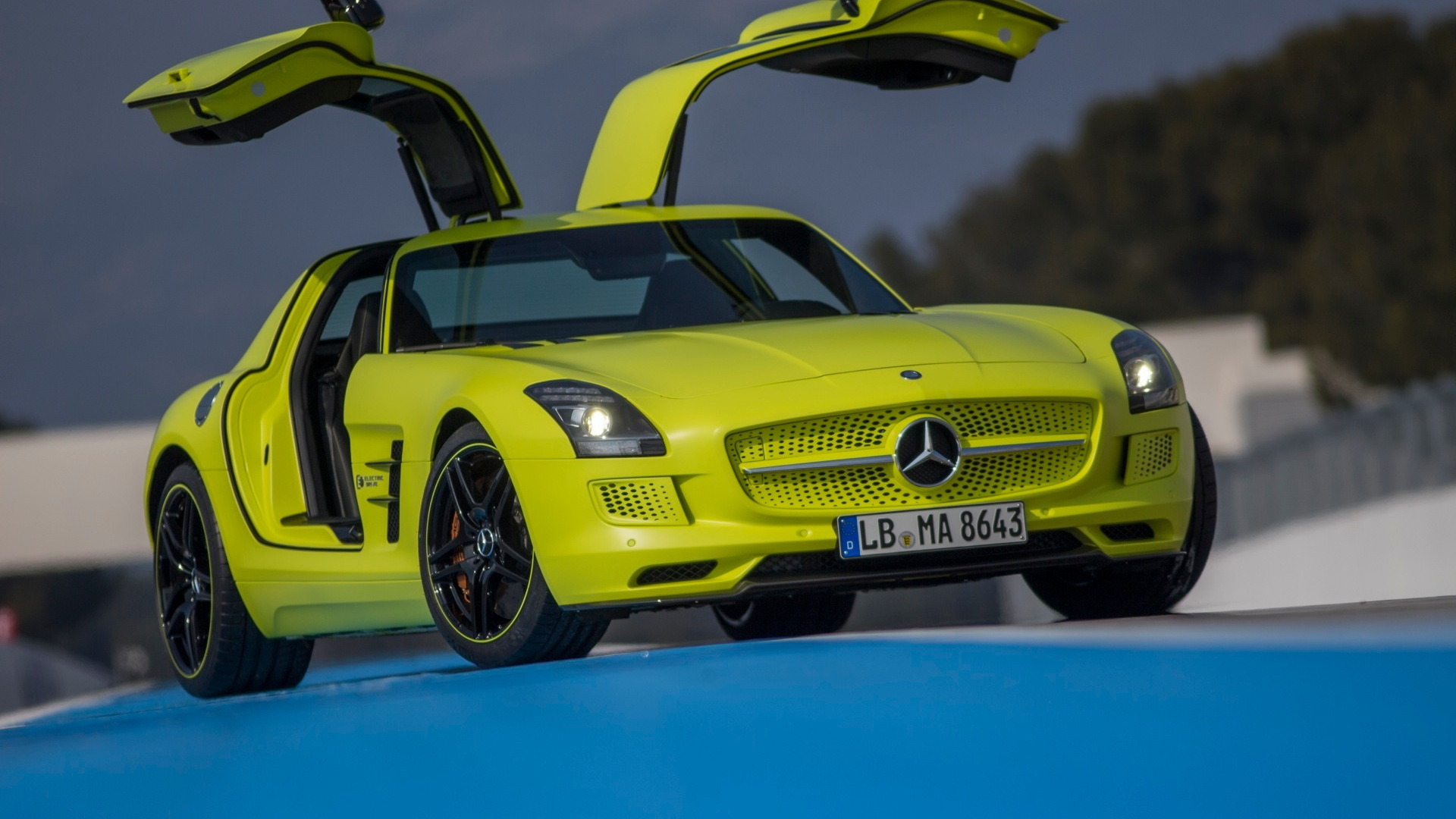 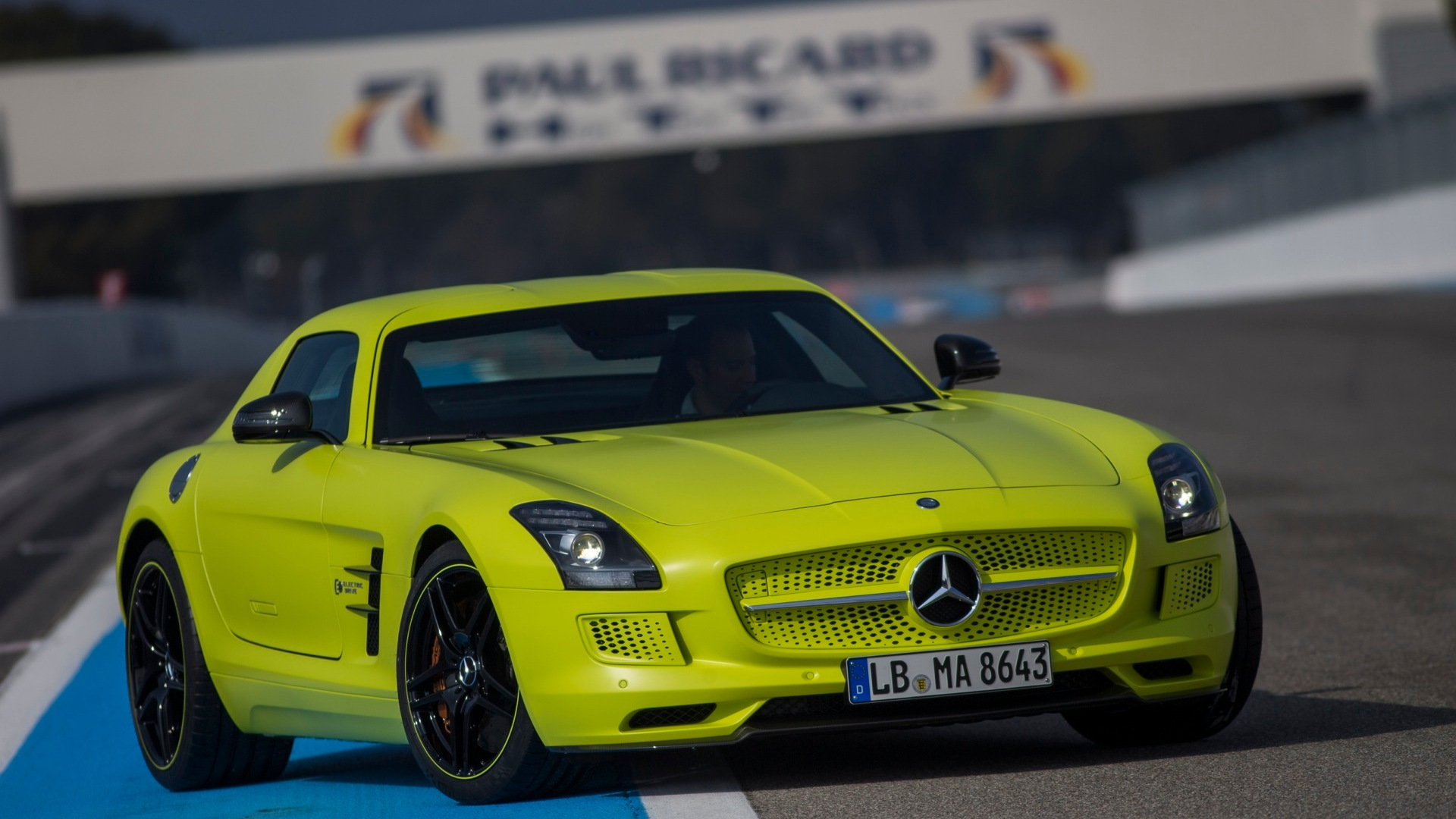 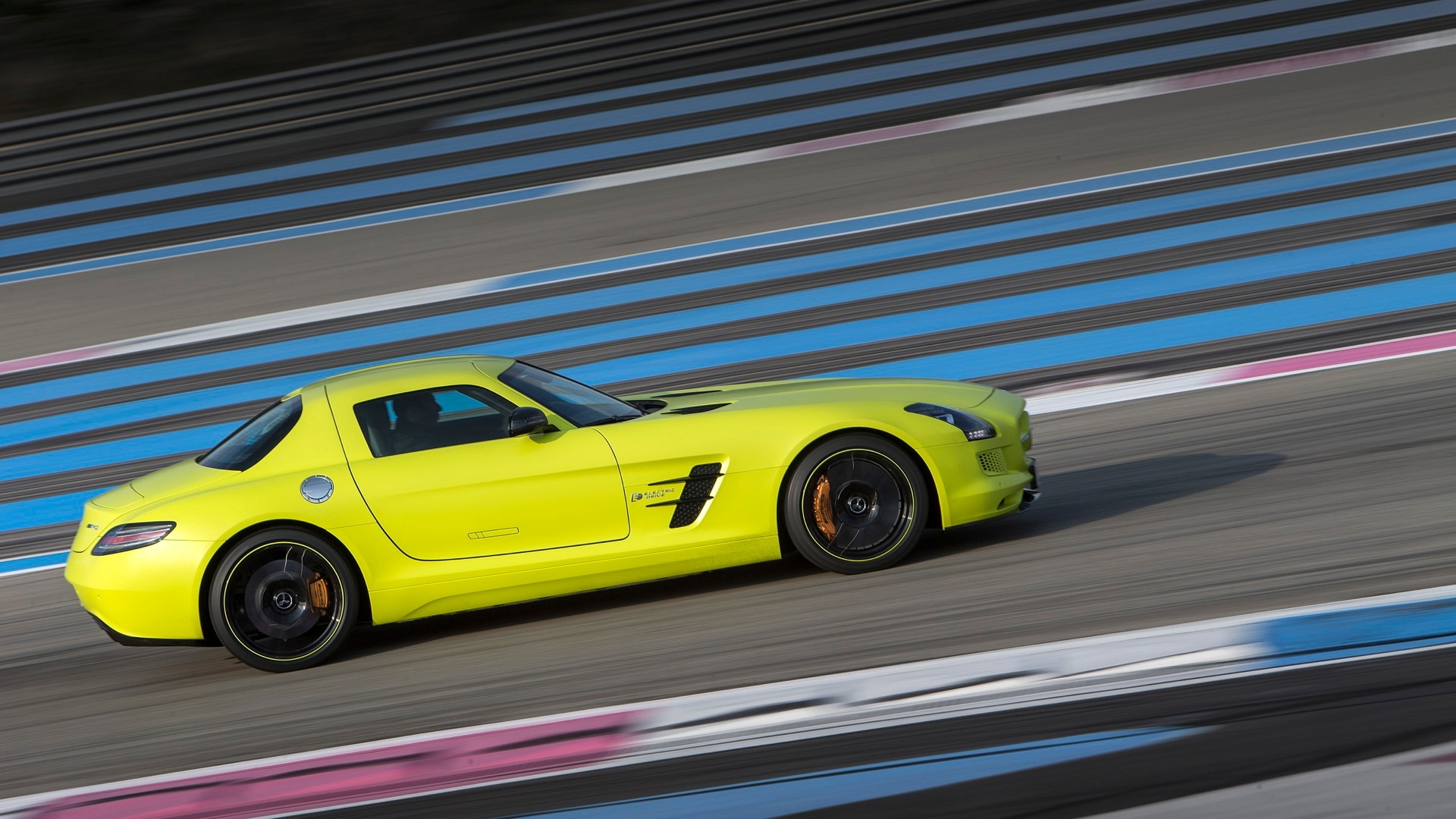 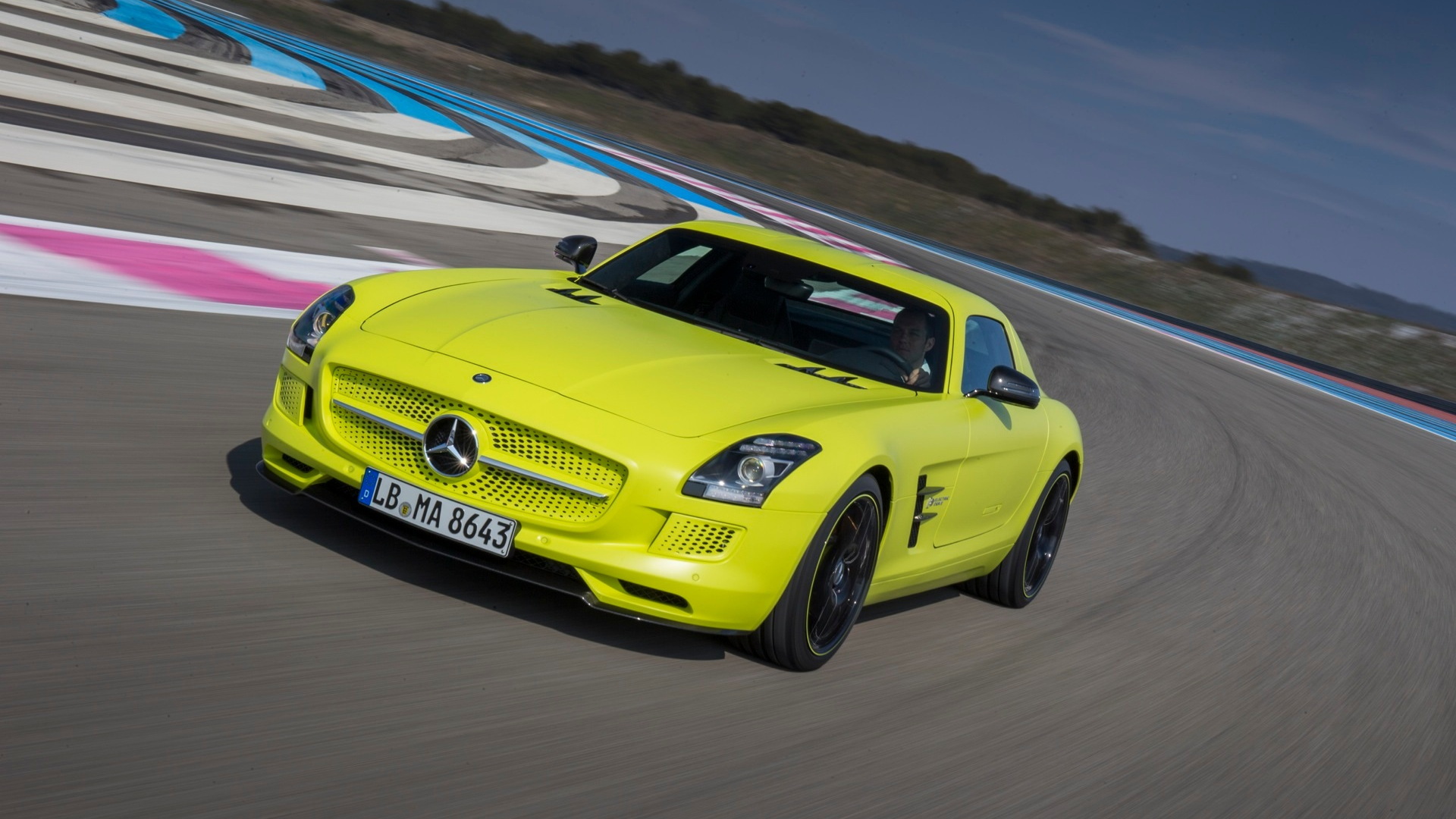 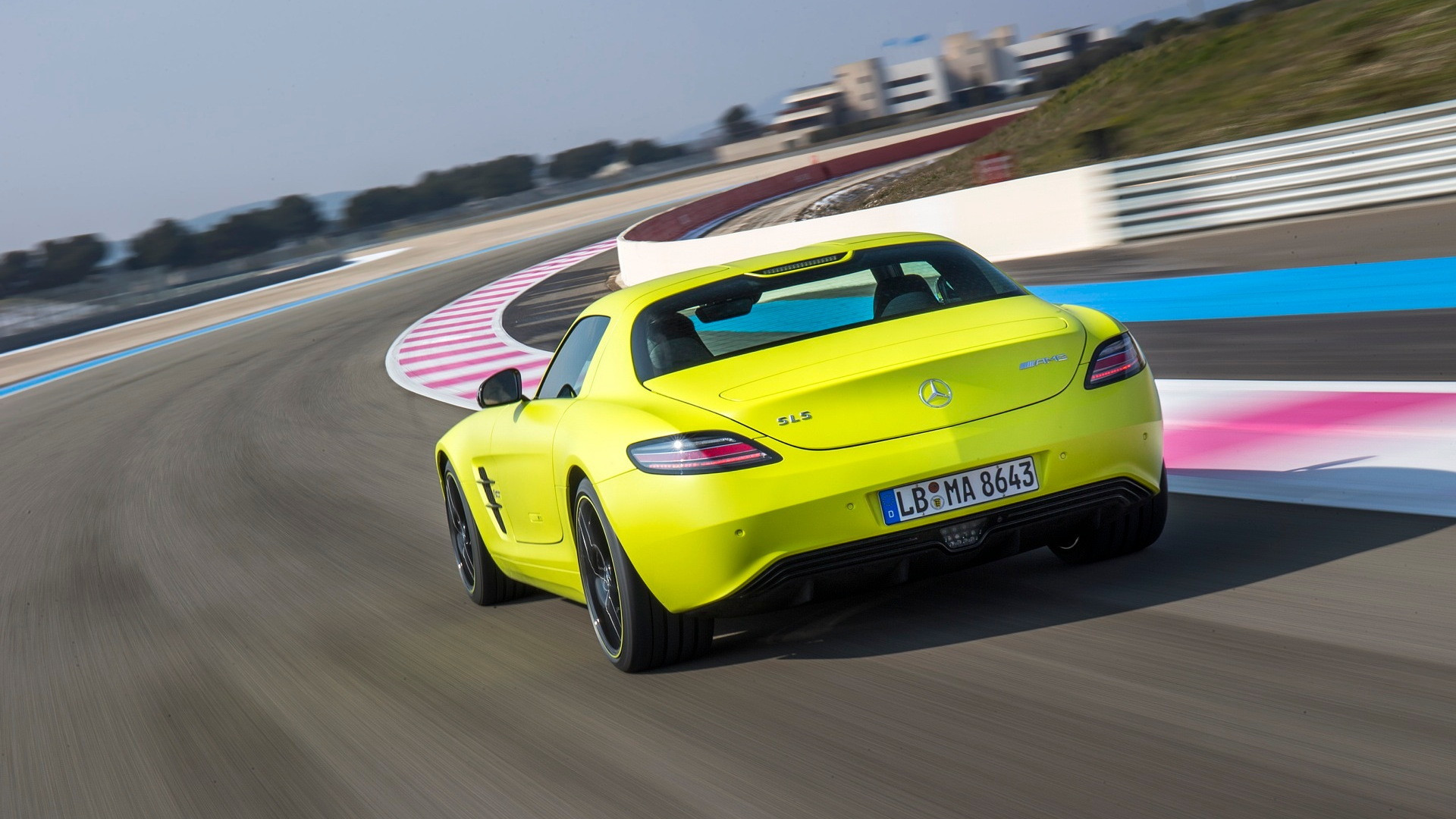 It was a Mercedes-Benz icon before it became a performance flagship. Now it's a messenger for the future: the gullwing's going electric. The SLS AMG Electric Drive electric car is closing in on series production, converting the octane-addicted supercar to fit a greener vision of the future.

We've told you before how we're green with envy over the Mercedes-Benz SLS AMG Electric Drive--the all-electric version of Benz' fabulous gullwing sportscar.

Now we've had a brief drive in the South of France, at Circuit Paul Ricard, to confirm that it's the real thing--though Mercedes is still coy about the Electric Drive's future in the U.S.

The Electric Drive first was announced in 2010, and had been vying with an electric version of the Audi R8, the e-tron, to be the first pure electric supercar into series production. Mercedes insists its car will be the first, but it remains unclear whether the R8 e-tron concept will get a second revival--or if it would even be considered a supercar in Swabia.

If it weren't for the electric-green paint on the Electric Drive prototype offered up to Green Car Reports, it would take a moment to distinguish it from the gasoline-burning SLS AMG GT Black Series supercars sliding around a few hundred yards away on a separate loop at the Paul Ricard track. The Electric Drive powertrain sits easily in the signature shape from the past.

Essentially, the SLS AMG is gutted and reformed entirely under the skin to accommodate a massive, 864-cell, 60 kilowatt-hour, 1208-pound lithium-ion battery pack running down the car's spine, along with a quartet of inboard electric motors checking in at about 100 pounds each. (Final curb weight: discreetly unpublished.)

The pack is liquid-cooled and shrouded in carbon fiber for what Mercedes says is "zero-intrusion" protection. The body structure's carbon-fiber too, with body panels hung from an aluminum space frame. It's a buffet of materials and a Ph.D. in materials engineering to integrate them.

Those electric motors handle more than the typical translation of electric power. There's one for each wheel, which enables what Mercedes dubs AMG Torque Dynamics. It's true torque vectoring--each motor can vary power to each wheel--and it's all-wheel drive of the highest order.

The complex of sensors for acceleration and yaw and braking give the marching orders, telling the motors to limit or increase energy, to moderate understeer and oversteer as the need arises and grip goes away.

Add electrohydraulic steering (not pure electric), a racing-style pushrod suspension (developed to accommodate the battery packaging), and carbon-ceramic friction brakes, as well as a layer of stability and traction control that backs up the torque-vectoring system, and the SLS AMG Electric Drive earns some supercar credentials of its own.

Power output is pegged at 740 horsepower, with 738 pound-feet of torque, and the official 0-60 mph estimate is 3.6 seconds, just a scant few tenths off the gas-powered car.

Our brief trip in the Electric Drive took us for a handful of truncated laps around the short end of the Circuit. It's a beautiful, safe, high-speed track near St. Tropez, as artfully striped as it is usefully wide in its runoffs.

On a longer loop, SLS AMG Black Series gullwings ripped around carousel corners while I climbed into the Electric Drive, trying to avoid for the seventh and eighth times clunking my head against those statement-making gullwing doors. The ringing in my ears subsided quickly, at least.

A brief blizzard of operating instructions revealed the few changes made to the SLS AMG's controls to adapt to battery power. The cockpit's the same, mostly, with the Electric Drive identity peeking through only on the LCD screen on the center stack. That's where a few new layers of information emerge: panels displaying charge state, estimated range, and the other vital statistics of the very heavy lithium-ion battery pack.

There's also an e-toggle to switch off the synthetic soundtrack created specifically for the Electric Drive. In the absence of the gas car's Levi Seacer V-8 pipes, engineers had to fashion something appropriate for an AMG, while filtering out humdrum noises no one wants to hear.

What's the right noise for a lithium-ion showpiece? Apparently, the same kind of Jetsons whir we've heard in other electric cars, maybe a few notches louder at speed, dynamically adjusting itself based on vehicle speed and cornering forces. One day we'll be able to choose an authentic AMG engine note, we hope. Sounds like a job for the mbrace2 squad. Maybe John Williams.

The other knobs on the console are more familiar to AMG drivers. The driving mode selector is the ticket to the Electric Drive's real threat to today's cars: its dynamic repertoire. These new electrified systems are in their infancy, but as they mature, they offer a much broader span of adjustable characteristics that their sometimes more primitive cousins just can't deliver.

You can radically alter the Electric Drive's driving feel, from Comfort to Sport to Sport Plus, amping up the steering response and dynamic precision for a track day, or slowing it down for a calming commute. You can do that on many cars today, but not with this intensity or efficiency.

The Electric Drive also lets drivers control the regenerative braking through shift paddles that change gears in the conventional SLS. Regeneration can be cut to zero by flipping the left paddle, or notched up, via the right paddle, to a level that resembles something like a second gear under engine braking.

The regen in the SLS AMG Electric Drive isn't nearly as strong as that in the Tesla Roadster Sport I drove at the end of its model run, or even in most extreme setting of the Tesla Model S. The handlers explain: The flexibility preserves the AMG feel--something that comes to light through corners and cones strung together to demonstrate the Electric Drive's legal-sized performance envelope.

I pull out on to the track, almost silently, while my co-pilot rotates the control knob into Comfort mode. The car remains calm while I walk it through the first lazy corner. Acceleration is brisk but not fast, and the steering feels like it's lost some weight from its stock-car days. It still needles a figure-eight through cones readily, but rotating it to Sport mode convinces me that the "C" setting is primarily a battery-conservation conversation starter.

Anyone who takes possession of one of these one day will live in Sport, or better yet, Sport+ mode, where the Electric Drive does several steps better than the standard SLS--putting its inboard electric motors to fantastically quick effect in turn-in and ride flatness, correcting oversteer by modulating torque at the proper wheel, not by simulation via anti-lock on an opposite wheel.

The software is beyond prescient, but it can't cure everything, and I figure out that it's possible to rotate the Electric Drive a degree or two out of true even with Torque Dynamics in control. If the need arises, there's still conventional stability control to intervene, but torque vectoring in principle slices that need to a fraction.

Yes, there are limits to physics. The Electric Drive has them, and more of them. Its stated performance numbers lag those of the SLS AMG GT, without even going to the new Black Series edition. Top speed is limited to 155 mph in recognition of the realities of battery power and life.

But the performance limitations are minor against the backdrop of zero local emissions and that remarkably adaptable personality.

Oh, and then there's the harsher reality. Price is a sore point--nearly $550,000 without the quick-charge facility installed at your point of convenience. The quick-charge time is estimated at three hours--without it, you're looking at something like 20 hours.

The primary restraint is the most vexing one: Availability. The Electric Drive will be available for some global citizens this calendar year, but the official line for possible U.S. sales of the SLS AMG Electric Drive is still "not confirmed."

While we wait for that weaksauce to reduce, we'll make no predictions. But a best guess? Prepare to be electrified all over again.