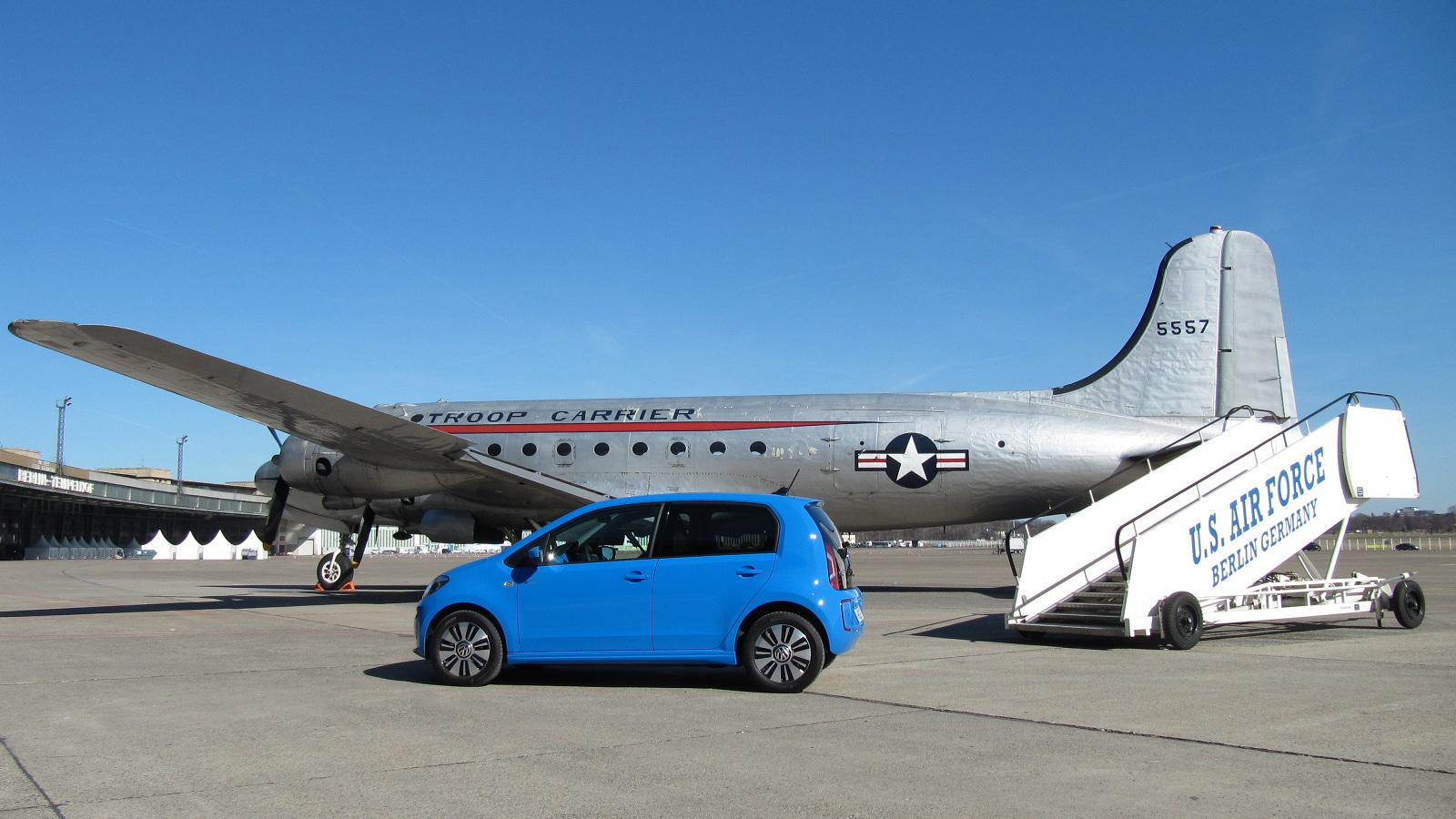 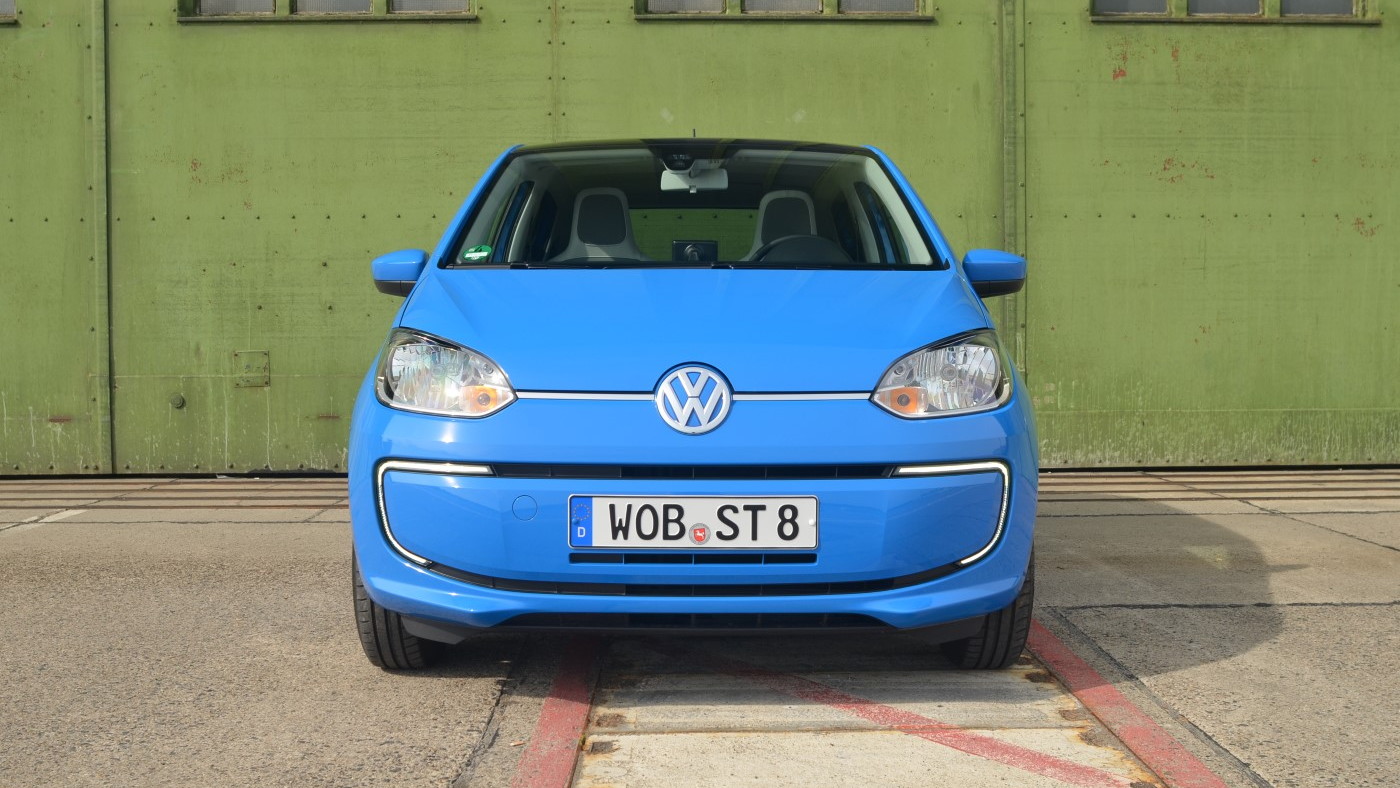 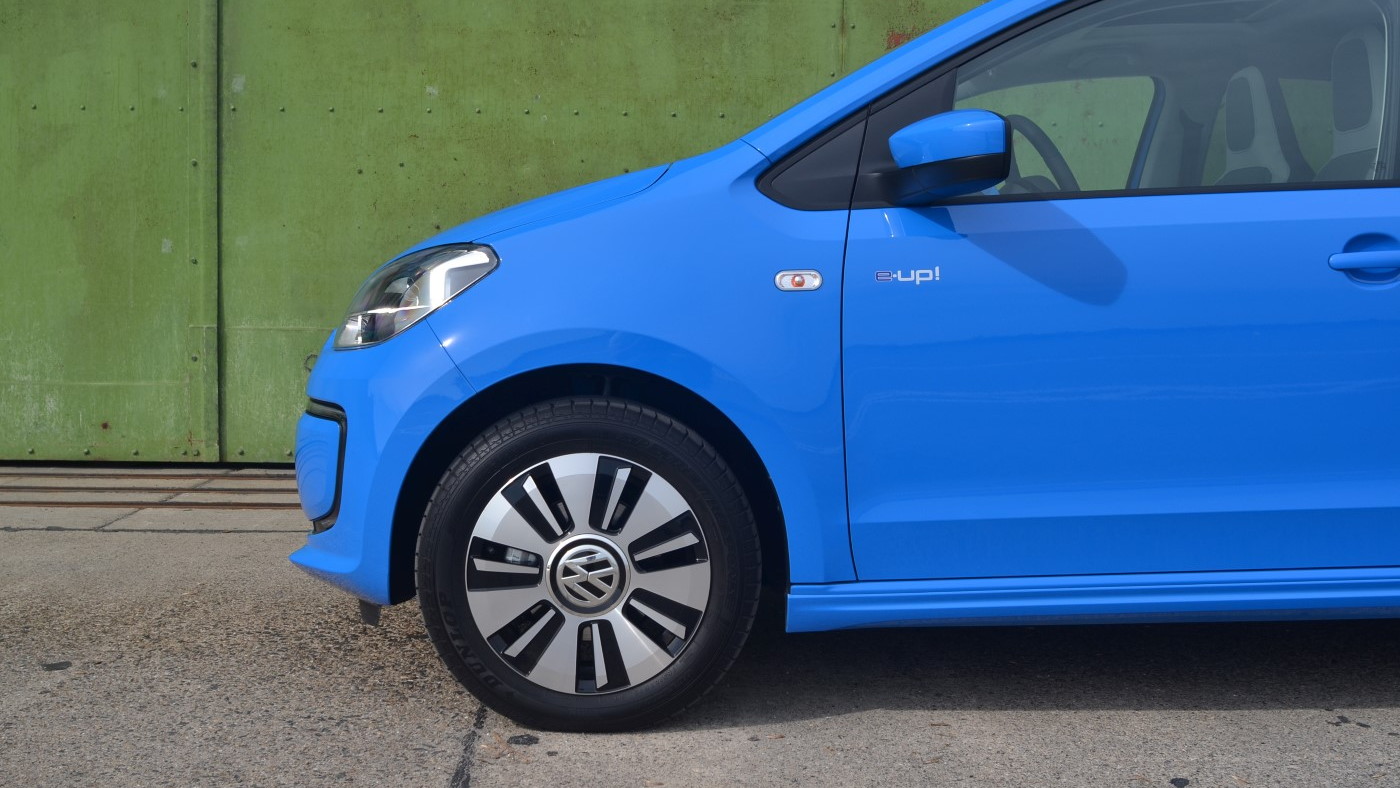 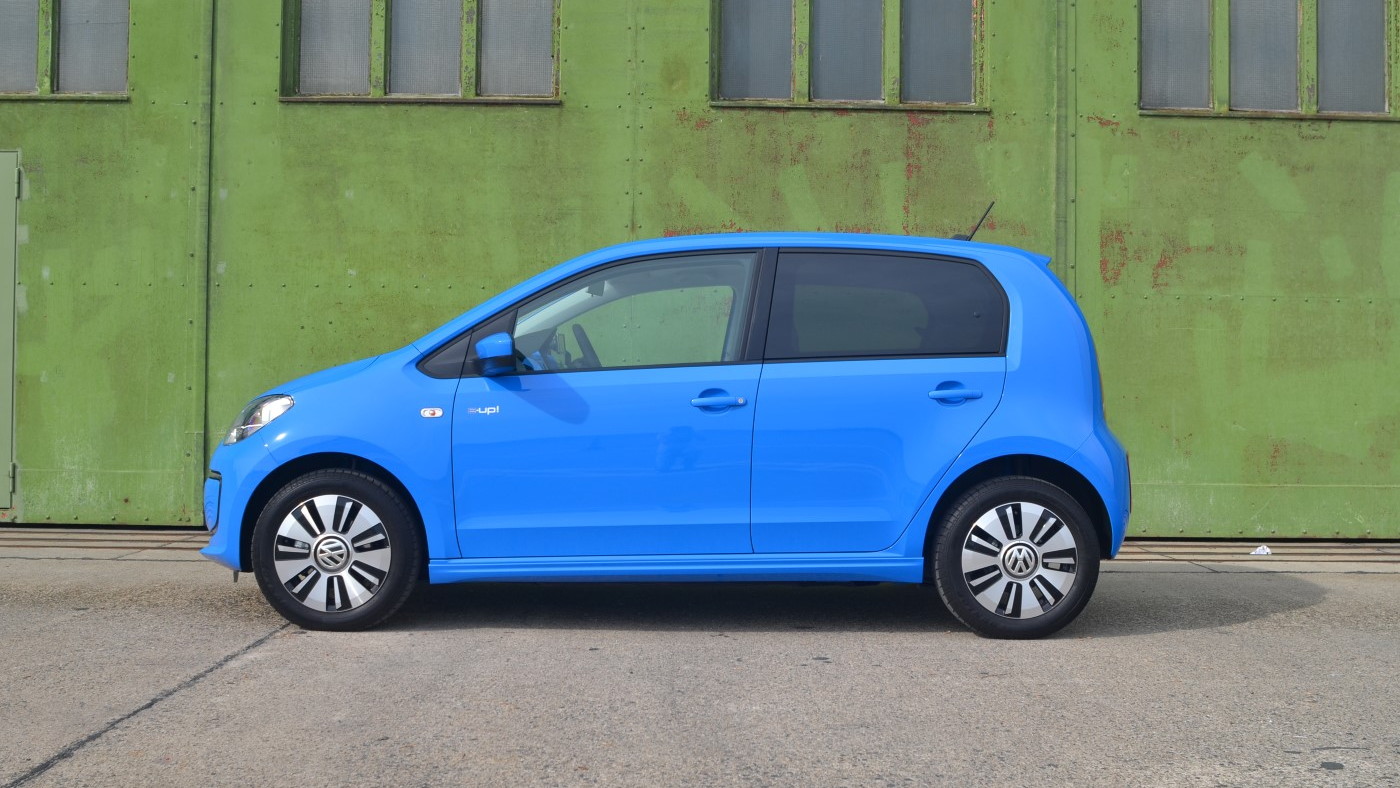 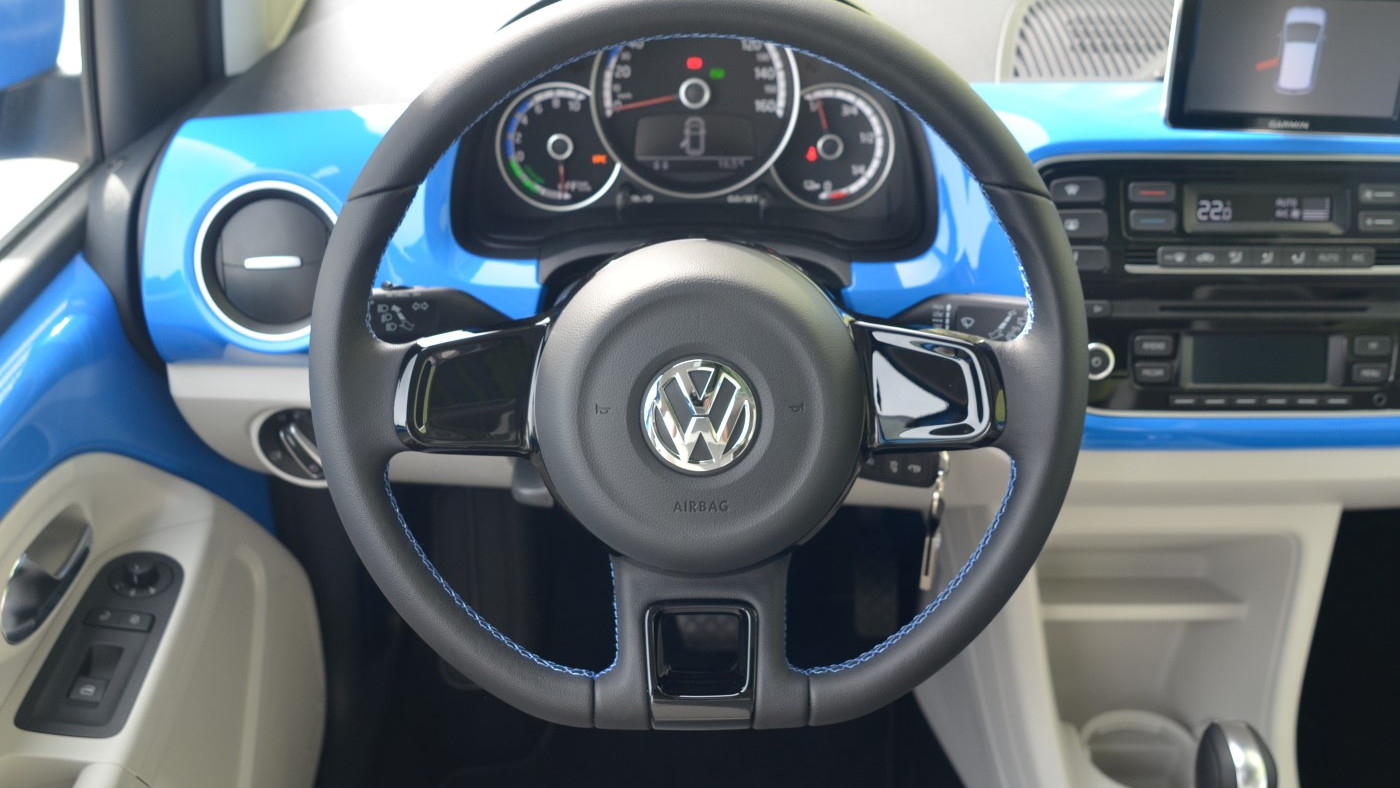 Of the three plug-in VW cars we drove in Berlin this month, the one we liked best is the one we won't get in North America.

The Volkswagen e-Up battery-electric minicar is a blast.

It's small, rollerskate-agile, and performs well enough that it would be our preferred vehicle in any crowded city.

And it's a huge upgrade on the gasoline version, Volkswagen's least expensive car in Germany, which we loved on its own merits when we drove a European version two years ago.

MORE: Volkswagen Up: The Coolest High-MPG Small Car We Can't Have

But VW didn't design the Up minicar to Federalize, meaning to do well on U.S. crash-safety tests. Nor is it fitted with various safety features required under U.S. vehicle codes.

The four-door even has flip-out rear windows; when's the last time you saw that?

VW doesn't sell its Polo subcompact here, let alone a minicar, and any plans to bring either car to the New World are far down the road.

Our half-hour in a happy little bright-blue electric Up offered a fascinating contrast to its larger, more adult sibling, the Volkswagen e-Golf--which will be sold in some regions of North America, as a 2015 model.

Where the e-Golf is solid, quiet, and dignified, the e-Up is smooth, but perky and nimble.

Where the e-Golf's interior is made of high-quality soft-touch plastics and feels "German," the e-Up uses body-color painted sheet metal and plastic, with a small removable Garmin navigation display that plugs into the top of the dashboard.

Contrasting blue stitching on the beige and grey cloth seats added an upscale touch to the cabin, as well as distinguishing the electric Up from its lesser gasoline siblings.

And while the e-Up has a smaller battery pack and less powerful electric motor--18.7 kilowatt-hours and 60 kilowatts (80 horsepower), respectively, against the e-Golf's 24.2 kWh and 85 kW (114 hp)--it's a smaller car and doesn't feel compromised in any way by its specs.

In Normal mode, the e-Up had what felt like more aggressive regenerative braking than the e-Golf, meaning it was closer to true "one-pedal driving" without using the shift lever to raise the degree of regen (from standard D1 through increasing D2 and D3 levels).

As in the e-Golf, the e-Up's blending of regenerative and friction braking was excellent. And the e-Up accelerated smoothly up to 62 mph (100 km/h) with very little tire or wind noise apparent.

In our discussions with Volkswagen executives and other journalists, someone pointed out that VW is the sole automaker with two entirely separate battery-electric passenger cars right now.

(Nissan has its Leaf and also the e-NV200 electric delivery van, but that's not a passenger car--and VW showed an "e-Load Up" delivery model with a cargo screen behind the front seats.)

Along with the Volkswagen Golf GTE plug-in hybrid, that makes three separate plug-in models--an impressive opening salvo from one of the three largest carmakers in the world.

And they're all good in their own way, although we look forward to driving a production Golf GTE, since the development prototype we drove was far from smooth in blending its various sources of power.

But the e-Golf and e-Up are both very good for first production electric cars. If Volkswagen is committed to marketing them aggressively at reasonable prices--and that's a big "if"--we think they should do well in their various markets.

We just liked one of them much more than the other, and of course it turns out to be the one we can't have in North America.

If there were ever a car to persuade U.S. drivers that minicars can be fun, fast, comfortable, and a blast to drive, the electric VW Up would be it.

It rather reminded us of the Chevrolet Spark EV, which shares many of the same qualities--but sells only in compliance-car numbers.