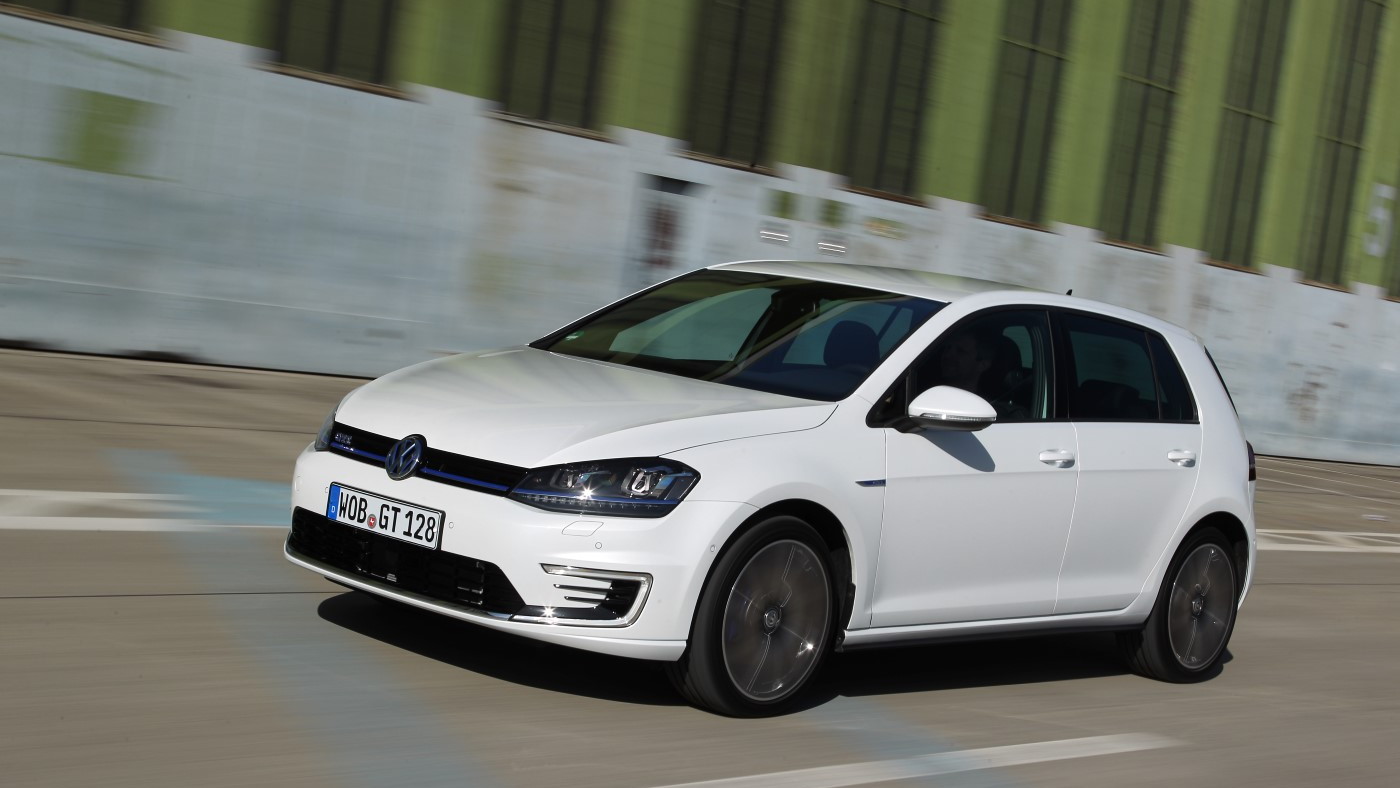 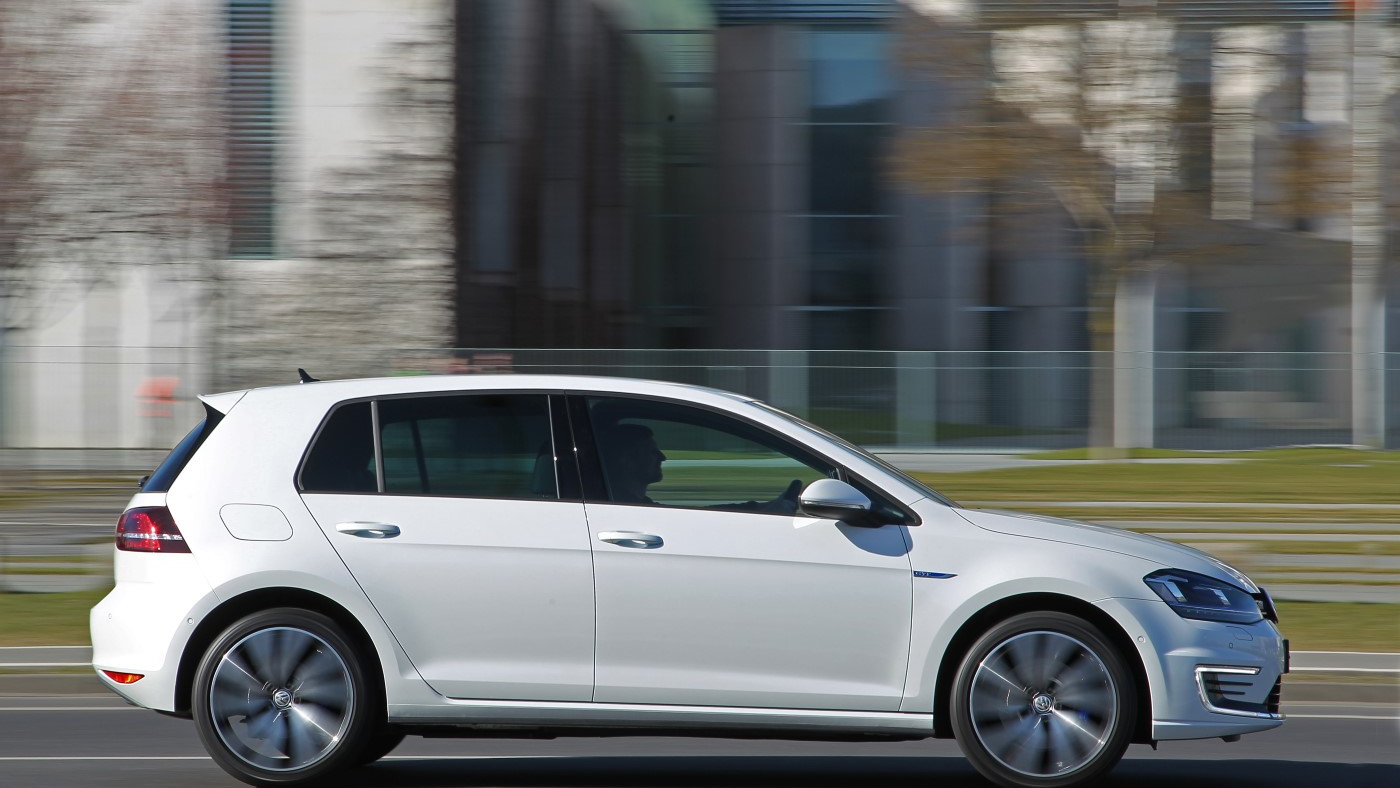 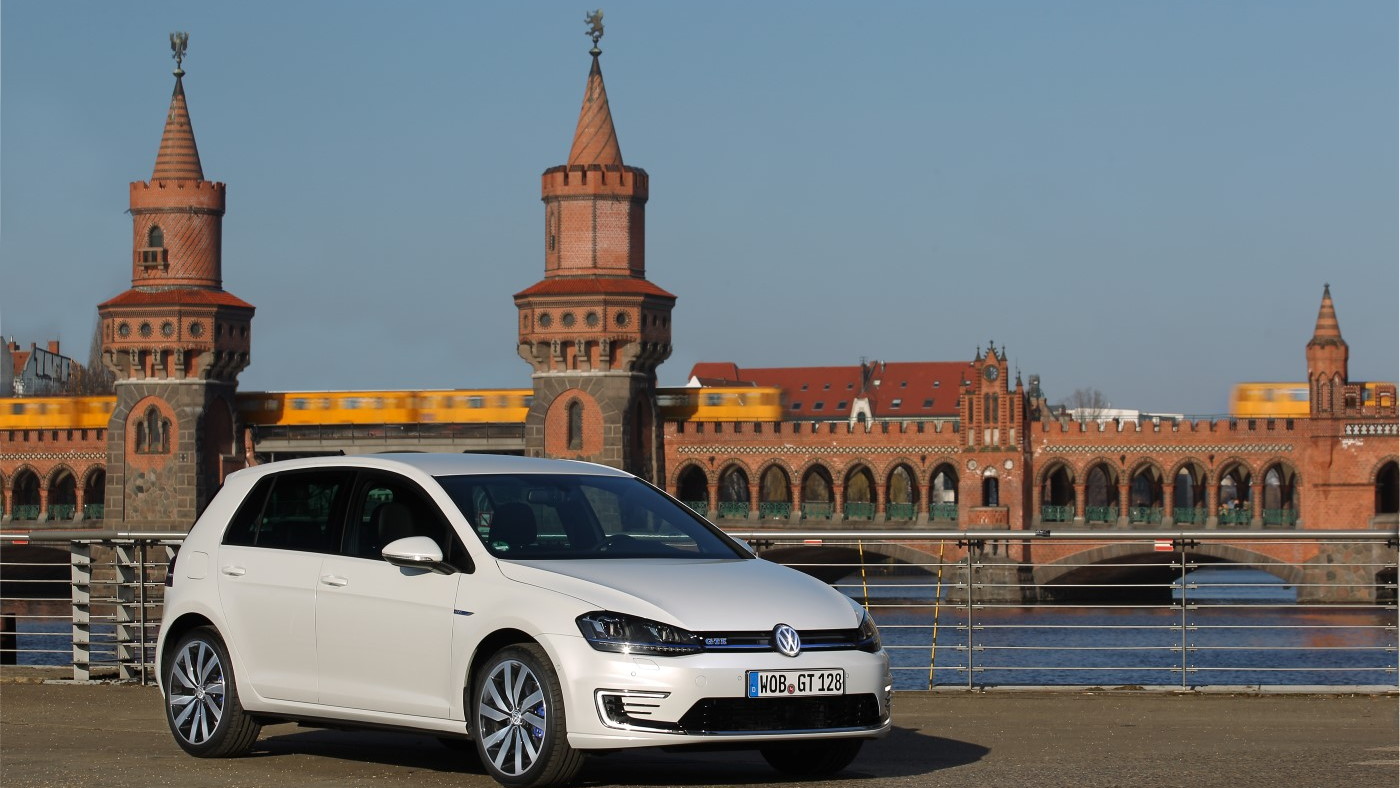 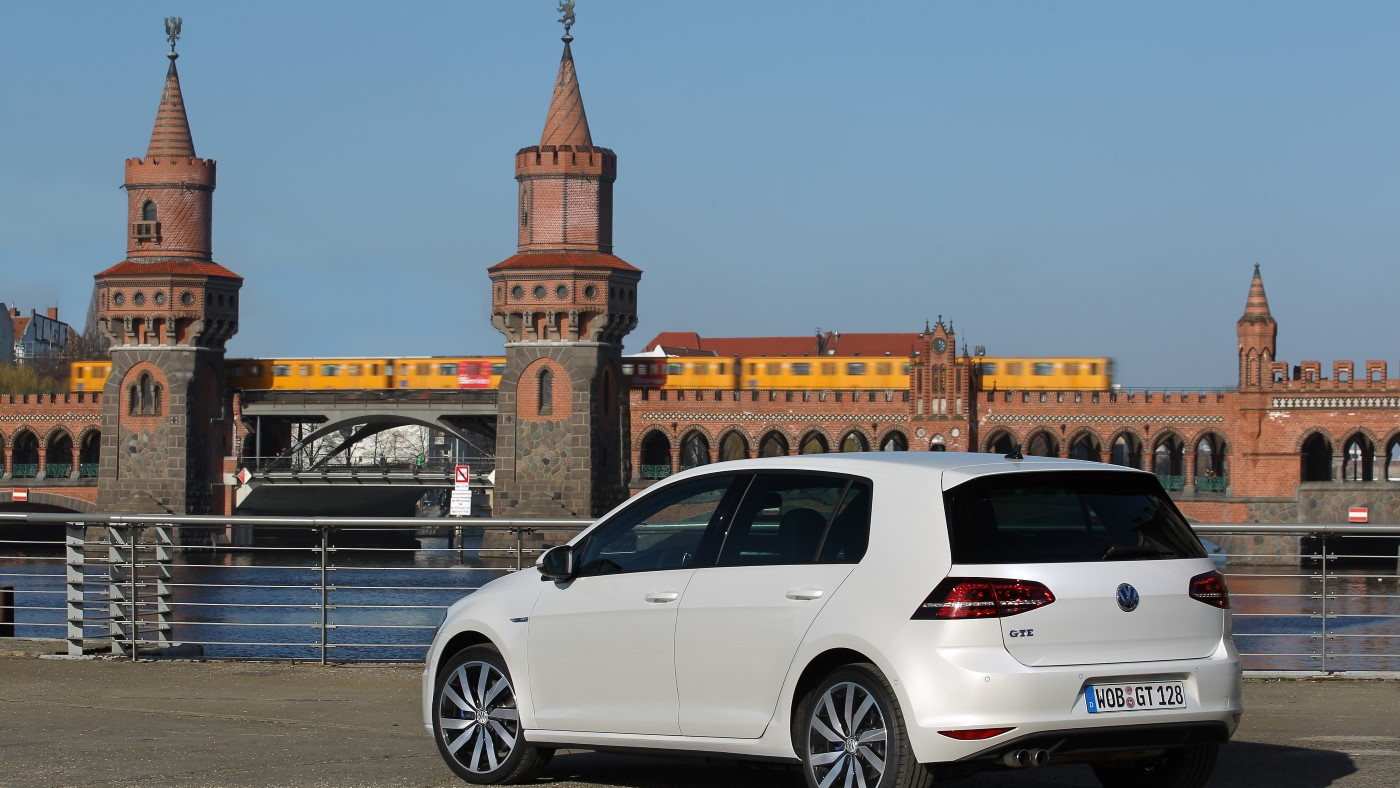 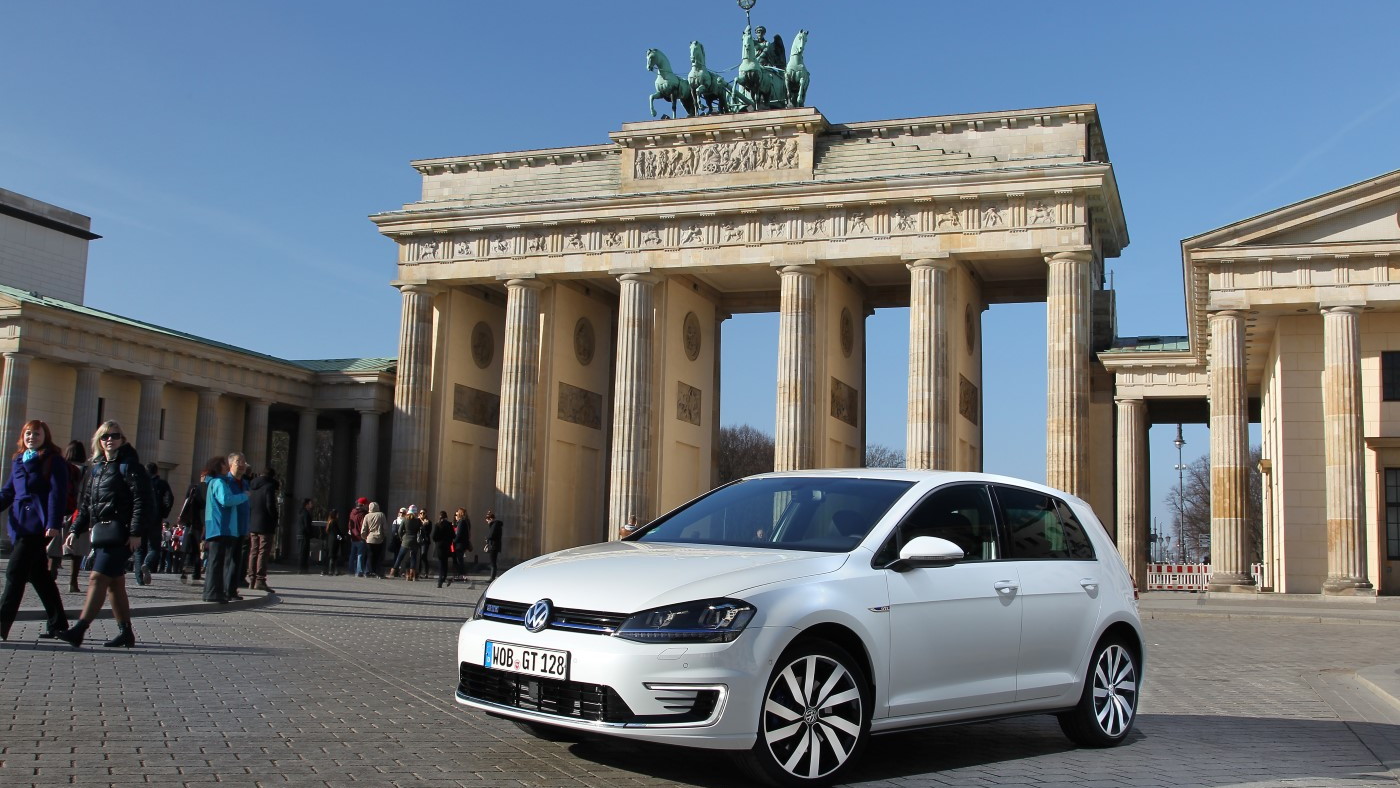 16
photos
Volkswagen is on an electric-vehicle model offensive right now.

Not only is the e-Up electric minicar on sale in Europe, dominating Germany's electric sales charts, but the automaker has now launched the e-Golf, an electric version of its popular compact--a car that will make its way to U.S. shores.

There's a third player in its strategy, too--the sporty Golf GTE plug-in hybrid--and last week, we drove and rode in a pre-production prototype GTE for 20 minutes around the former Tempelhof Airport in Berlin.

The GTE is aimed at slightly different customers from those who may buy the all-electric e-Golf.

While buyers may be intrigued by the concept of electric vehicles, longer commutes or unpredictable long-distance journeys may mean battery-electric power just doesn't offer adequate range--at least until Europe is blanketed with a network of DC fast-charging stations.

Others may be feeling the squeeze of Europe's CO2-based vehicle taxation, making even VW's relatively efficient Golf GTI and its fuel-sipping Golf GTD too expensive to run. And neither of those is designed to cope with expected zero-emission European city centers.

With a quoted 28 miles of electric range (on the European test cycle) from its 8.8 kWh lithium-ion pack--likely closer to 20 miles in reality--the Golf GTE does just that.

It's also cheap to run over those electric miles, for regular daily commutes--but as with all plug-in hybrids, it has extra gasoline range for longer trips. VW says it will travel up to 584 miles, again under European testing.

The engine is a 1.4-liter turbocharged, direct-injected gasoline four; combined with the electric motor, total power output is a healthy 204 horsepower.

Power from both the engine and motor is sent to the front wheels through a seven-speed dual-clutch automatic transmission. Paddles behind the steering wheel let the driver control the gearbox when the gasoline engine is up and running.

VW has decided to position the GTE alongside its existing GTI hot-hatch and GTD performance diesel models, as a more sporting take on electric power.

Visually, that means GTI-like styling, inside and out, from Eighties-style slats in the front bumper to the blue line running under the grille and into the headlights. On the GTI and GTD, that line is red and chrome, respectively.

Inside too the GTE is modeled on the GTI, with VW's famous tartan-patterned sports seats, a three-spoke, flat-bottomed steering wheel, and metal-finished pedals.

There are only a few clues to its part-electric drivetrain.

One is the charge and electric power gauge in the instrument cluster, which replaces the usual tachometer. On the gauge face, escalating numbers refer to the motor speed, rather than the engine--though a tiny tach, the size of a fuel gauge, does sit within it.

The other is the small 'E-mode' switch down by the gear selector. And on the central touchscreen display, various drive mode information screens also provide details on the car's electric workings.

The pre-production plug-in hybrid Golf we drove and rode in was still a little rough around the edges, but its sporting appeal was easy enough to see.

It moves away briskly from a standing start, whether in e-Mode, normal, or the sporting GTE mode that draws on the full power of both the engine and electric motor.

Initial response isn't quite as sharp as that of the e-Golf, since the electric motor itself is less powerful than the one propelling the e-Golf. But with both powerplants working together, the GTE is fairly rapid--accompanied by a sporting rasp and lightning-fast gear changes from its dual-clutch gearbox.

One of the rough edges we found in our pre-production model was an audible perception, that we could also feel through the vehicle, of the gearbox changing in the background during acceleration in e-Mode.

Volkswagen development engineers said that in the production versions of the Golf GTE, the DSG's covert changes will be masked entirely.

Naturally, e-Mode isn't quite as quick as the GTE's usual 7.6-second 0-to-62-mph sprint--you'll reach that speed electrically in about 11 seconds, slightly slower than the e-Golf.

The electric mode gives the GTE an entirely different character from the engine/motor/transmission combo, though. It'll still hit 81 mph flat out, meaning highway trips on all-electric power are possible.

As in the Volkswagen e-Golf, there are a few options for coasting or regenerative braking, via the D and B modes on the automatic shifter. In the standard D, lifting off the gas pedal allows coasting; nudging the lever back to B brings in regeneration, nearly enough for one-pedal driving at lower speeds.

In the pre-production car, this too wasn't quite as smooth as it is in the e-Golf. And under hard acceleration, the engine kicked in rather suddenly. We'd expect both aspects to be more polished in the production vehicle.

The car's pre-production status was confirmed when Volkswagen's ride-along minder put his hand over the in-dash display to prevent us seeing a few screens as he cycled through options.

He also denied our requests to take a look at the battery under the luggage-area carpet.

It seems there are still a few secrets in the Golf GTE--or perhaps unconfirmed features--even this close to production.

Tested back-to-back with the Volkswagen e-Golf, it was hard to give the GTE the overall nod. But it would be unfair to judge it too harshly, since we were comparing a pre-production prototype to finished models of a car now in the showrooms in Germany.

We can absolutely understand the appeal of a plug-in hybrid Golf, though.

From the GTI-style interior to the performance you can draw on, the GTE would seriously tempt us to stump up the extra cash over a GTI or GTD.

Over short distances, it would be cheaper than either one. VW said that in Europe, it's only expected to cost $4,000 to $5,000 more than the range-topping diesel model.

Will it come to the U.S.? Volkswagen has mixed messages when responding to that question.

The official line today is that it won't. Instead, we'll get its engine and drivetrain in a different car: the 2015 Audi A3 Sportback e-tron, which will join the all-new 2015 Audi A3 lineup after it launches this spring.

But to meet increasingly stiffer fuel-economy standards, one U.S. Volkswagen executive said, "it's hard to imagine we wouldn't" bring the Golf GTE to the U.S. sooner or later.

Which means Volkswagen could have a remarkably wide array of green technologies in its lineup a few years hence: its well-known diesels, the Jetta Hybrid, and now the e-Golf battery-electric vehicle, and the Golft GTE plug-in hybrid.

Which would you choose? Leave us your thoughts in the Comments below.

[NOTE: This review incorporates impressions from two different Green Car Reports writers, Antony Ingram and John Voelcker, both of whom drove and rode in the Volkswagen Golf GTE during VW's recent media events for the Volkswagen e-Golf.]