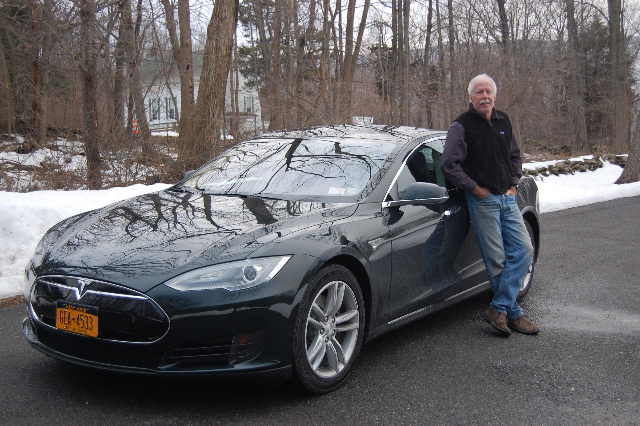 I won't dwell on the ear-flattening acceleration, nor the magic-carpet ride and handling, nor the mesmerizing 17-inch touch screen controls.

Those features have been exhaustively  analyzed and reported by far more expert authorities than I.

But there have also been a few things I didn't expect.

Here are some of the little surprises--good and bad--that I've noticed in the Model S so far.

One of the joys of electric driving is regenerative braking.  Lift your foot off the "gas" pedal, and the car slows aggressively as the drive motor turns into a generator and sends current back into the battery.

Strong regen is not only energy-efficient, but also gives the car a sporty, responsive feel, like engine braking in a  gas car in a low gear.  Electric-car drivers call it "one-pedal driving." With strong regen, you'll hardly ever touch the brake.

Different electric cars have different levels of regen.  The gentle Nissan Leaf is designed to feel like a standard car [but has two different settings for Regen, D and ECO].

The Chevy Volt has two regen settings, one that mimics conventional gasoline cars, and a second stronger one that allows for one-pedal driving. (I drive my Volt in this "L" mode virtually 100 percent of the time.)

The Model S, like the Volt, has two settings: Low, which mimics conventional cars, and Standard, which follows in the one-pedal tradition of the Roadster.

I was eagerly anticipating  the same sporty, responsive regen feel that had hooked me in the Volt.

Not so much, it turns out.

To my surprise,  regenerative braking in the Model S virtually disappears when the battery is cold. Starting out on a winter's day, it feels disappointingly like any old ICE car--even with the regen on the highest setting.

As the battery warms, the regen gradually increases. But it can take a maddeningly long time to get back to the max level.

On a sunny 40-degree day last week, it took almost 25 miles of driving for full regen to come back. On my typical shorter trips around town, I never get it back. I'd guess that overall, perhaps only a third of my driving so far has had full regen available.

Blame the Model S battery management system, which is programmed to limit the charge rate when the battery is cold.

Under normal circumstances, abruptly backing off the gas pedal at high speed can send a jolt of up to 60 kW into the Model S battery. Tesla engineers believe such bursts of charge are not healthy for cold batteries, and therefore limit regen accordingly.

The Model S has a dashboard dial that shows exactly how much regen current is flowing back into the battery at any given moment.  Its maximum reading is 60 kW.

When regen is limited, a dotted line appears on the dial, and the  meter won't go beyond it. On a cold day, the dotted line starts out at around the 15-kW mark and gradually moves up to the 60-kW level before disappearing altogether when the battery reaches its normal operating temperature.

By contrast, the Chevy Volt's regen is unaffected by temperature. It's the same sporty feel, winter or summer. Apparently Chevy engineers don't see a problem with high charge rates for cold batteries.

Do they know something Tesla engineers don't? Or vice versa? 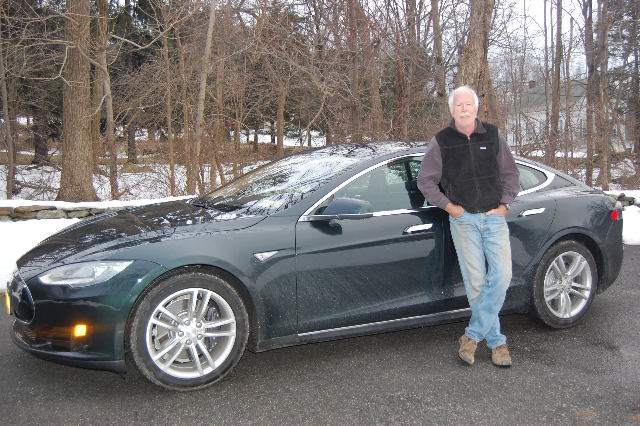 Whoever's right, and long-term battery health notwithstanding, one thing is indisputable: From the driver's point of view, the regen system of the Model S is a lot less consistent and fun than the Volt's in cold weather.

One more reason to look forward to summer.

The key fob that won't shut up

For the last 35 years, I've  left my keys in the car as it sits overnight in my driveway. (I live in a low-crime area, deep in the woods, at the end of a long driveway.)

It's a great system. I never, ever forget my keys on the kitchen counter or in the wrong jacket pocket. They're always waiting in the car.

Until I got the Tesla Model S.

When I casually described my car-key system to the Tesla delivery guy, he frowned and said, "If you do that with this car, you'll be replacing the key fob battery every month or so."

He went on to explain that when the key fob is in the car, it stays in constant communication with the Model S computer, which remains on all the time. Even though there's nothing really to talk about, the key fob  keeps talking to the computer 24/7. That takes juice. And that kills batteries. Moral: Don't leave the key in the car.

I'm trying to reform. It's not going well.

About half the time, by sheer force of 35-year habit, I walk out the door not thinking about my car keys.  I walk up the 200-foot path from the house to the driveway, go through the awkward getting-in contortion the Model S requires of tall, creaky drivers like me, and put the shift lever into Drive--only to be greeted with a "Key Not Inside" alert.

Help me out here, Elon. Could you please make a key fob that shuts up after a while?

I'm ready to wager that no production car in the world coasts better than a Model S.

There's a long, ruler-straight, very slightly downhill stretch of highway near my home. Visually, you'd be hard-pressed to notice the grade.

But drive the Model S along this stretch and slip the gear lever into neutral, and the car seemingly glides on like magic, maintaining 60 mph with zero energy input. It's surreal.

Credit the car's aerodynamic drag coefficient of 0.24, the lowest of any production car. Likewise the low-rolling resistance tires, inflated to 45 psi. As far as I can tell, that's the highest tire pressure on any production car.

The result is a hypermiler's wet dream.

Which raises the question: if you've got regen braking, why bother to coast?  By shifting to N, aren't you losing the chance to put free energy back into the battery?

But regen braking slows the car. And to accelerate back up to coasting speed takes all the energy you've just put back into the battery, and more.

Assuming a typical motor/generator/inverter effciency of around 80 percent, the regen process wastes about a third of the energy it processes.  100 watt-hours of kinetic energy from the car turns into 80 Wh of electricity back into the battery, which turns into 64 Wh of energy delivered back to the wheels.

Coasting, on the other hand, wastes nothing.

More efficient than the Volt....in winter

That's just slightly above the Tesla's official EPA rating of 35 kWh per 100 miles. Considering that all my driving was done at  temperatures of 25 to 40 degrees, that's a splendid number indeed.

By comparison, on a typical winter's day, the Volt uses around 40 kWh per 100 miles.

Thus the Model S--although much larger, around 800 pounds heavier, and with much better performance--is actually more efficient than the Volt in typical winter temperatures. Amazing.

The Volt's electric efficiency, however,  will shoot up dramatically once summer arrives. In 80-degree temperatures, the Volt's appetite for electrons drops to about 25 kWh per 100 miles.

Will the Tesla's numbers improve that much in warmer weather? 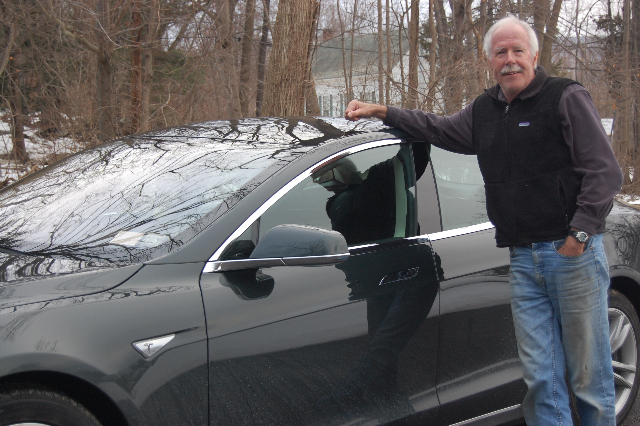 Tesla has stubbornly stonewalled my questions about cold-weather range loss for almost a year now.

But based on my winter numbers so far, the Model S appears to lose no more than 10 to 20 percent--dramatically better than the Volt, which in my experience loses up to 50 percent of its range in winter.  (As does the Nissan Leaf, according to owner reports.)

I find this to be one of the most intriguing technical mysteries of the electric car world:  How does Tesla manage to kick every other company's butt when it comes to cold-weather efficiency?

I keep a close eye on my home electric meter. For some reason, it  seemed to be running a little faster than normal after I got the Model S.

That was odd, because the Tesla was simply substituting for the electric miles I had already been driving in my Chevy Volt. The two cars are comparable in efficiency on winter days; it shouldn't have taken more power to run the Model S than the Volt.

And then one night I happened to leave the Tesla unplugged.

When I left the car at 9 p.m., the Rated Range display said I had 169 miles remaining. But next morning, I was surprised to find that the range had dropped to 153 miles.

As an experiment, I left the car unplugged again the next night. (Temperature was in the 20s, a bit colder than the previous night.) Indicated range dropped from 89 miles to 66, a loss of 23 miles.

That's the equivalent of about 8 kWh of electricity--which is one-third of my daily electric use, not including electric-car miles.

What's going on here?  Does it really cost as much in electricity to let the Model S sit static as it does to drive it?

I'm currently researching the topic further, and plan to use a watt-hour meter to determine precisely what goes on when a Model S sits unused, plugged in or not,.

Till then, I wouldn't advise leaving your Model S unplugged at an airport for a couple of weeks--despite the owner's manual's assurances to the contrary.