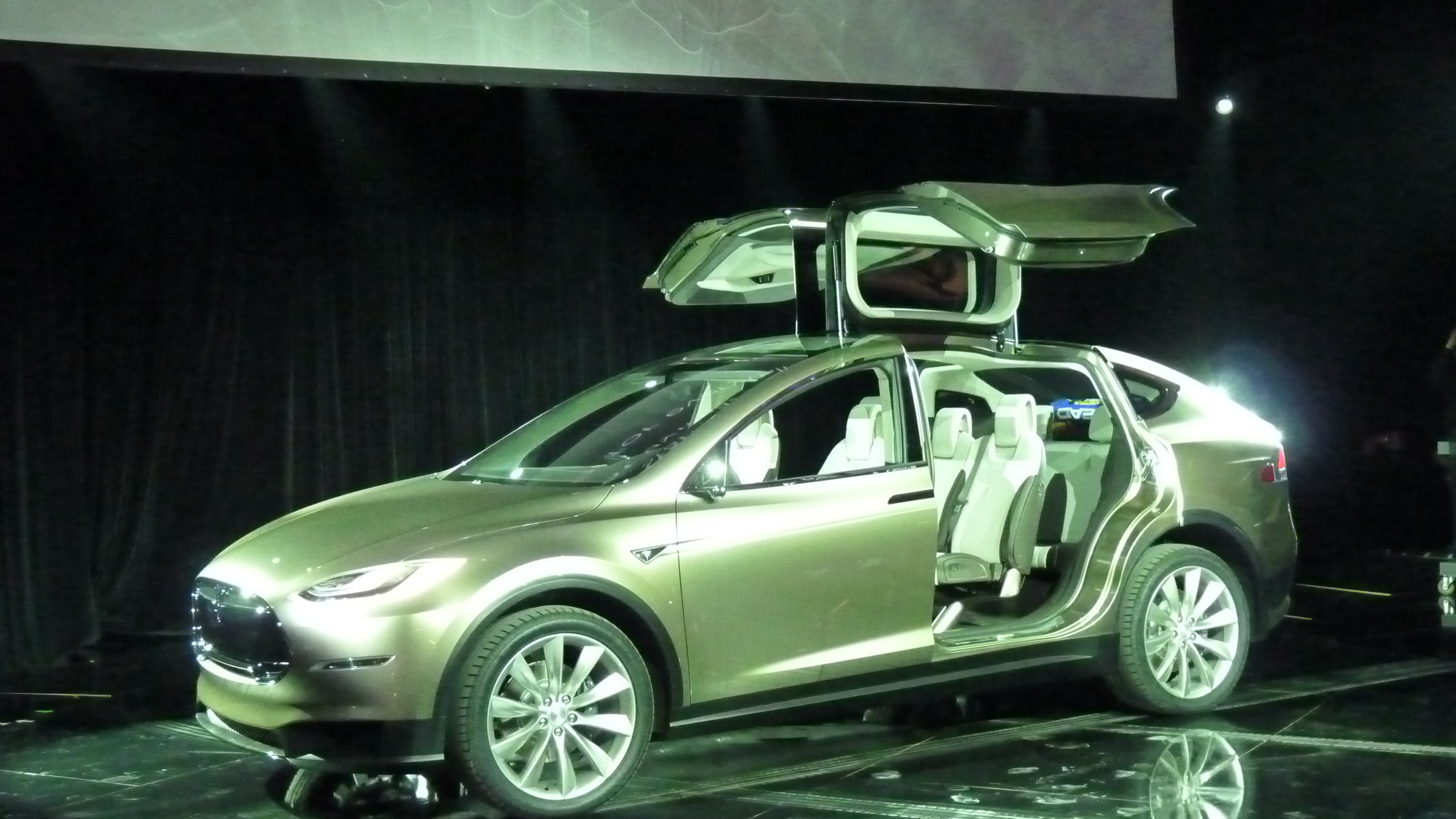 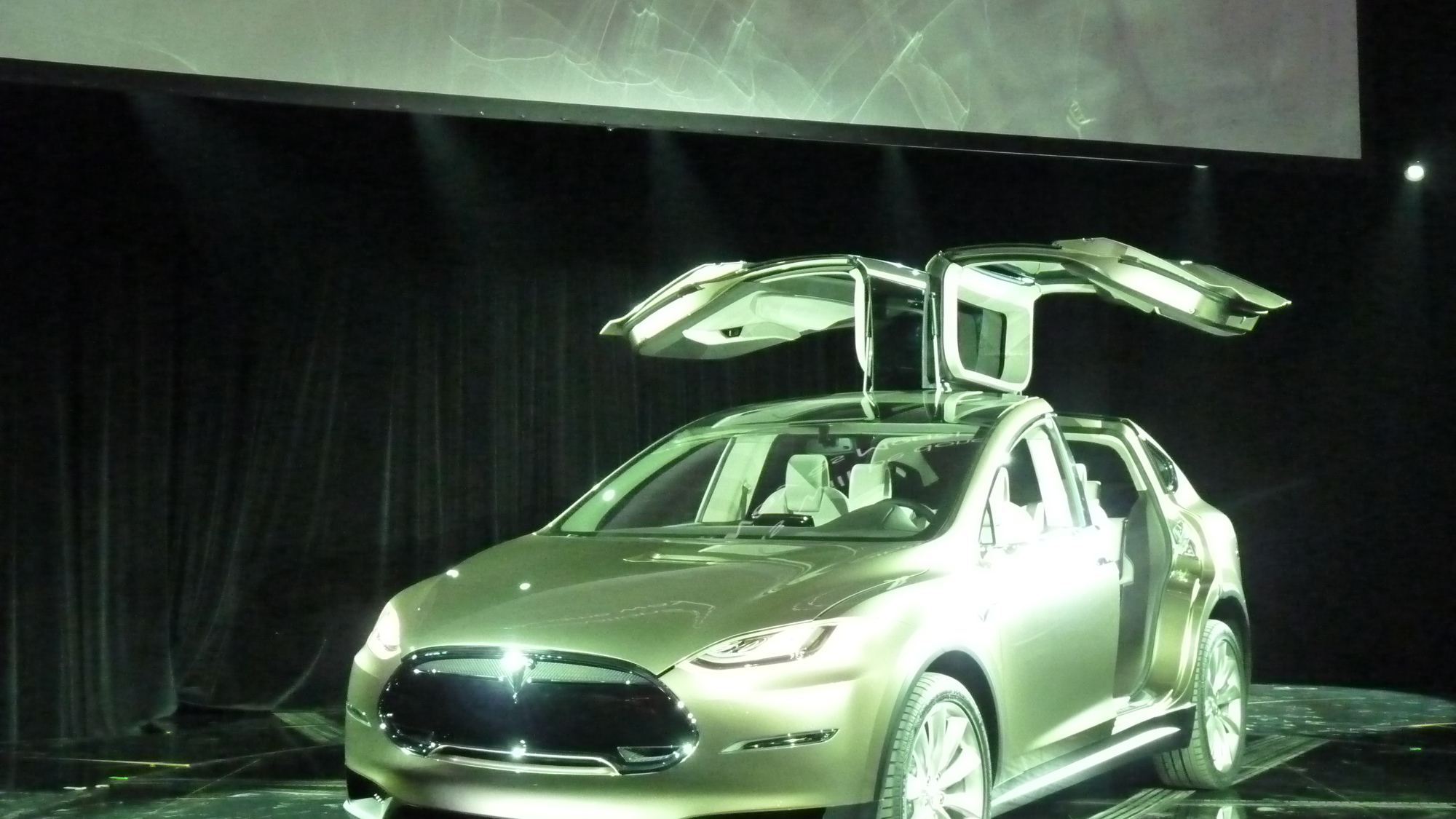 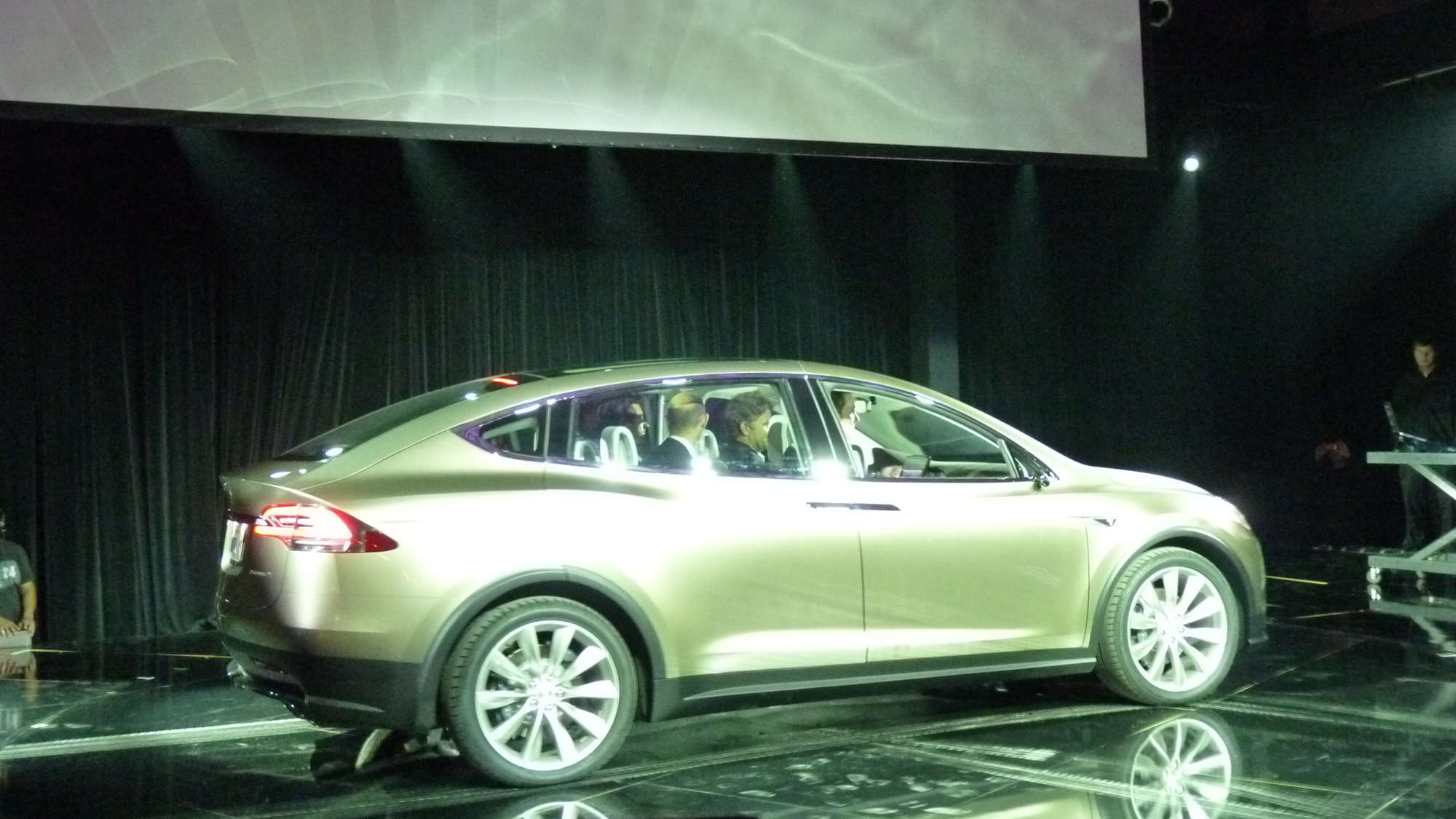 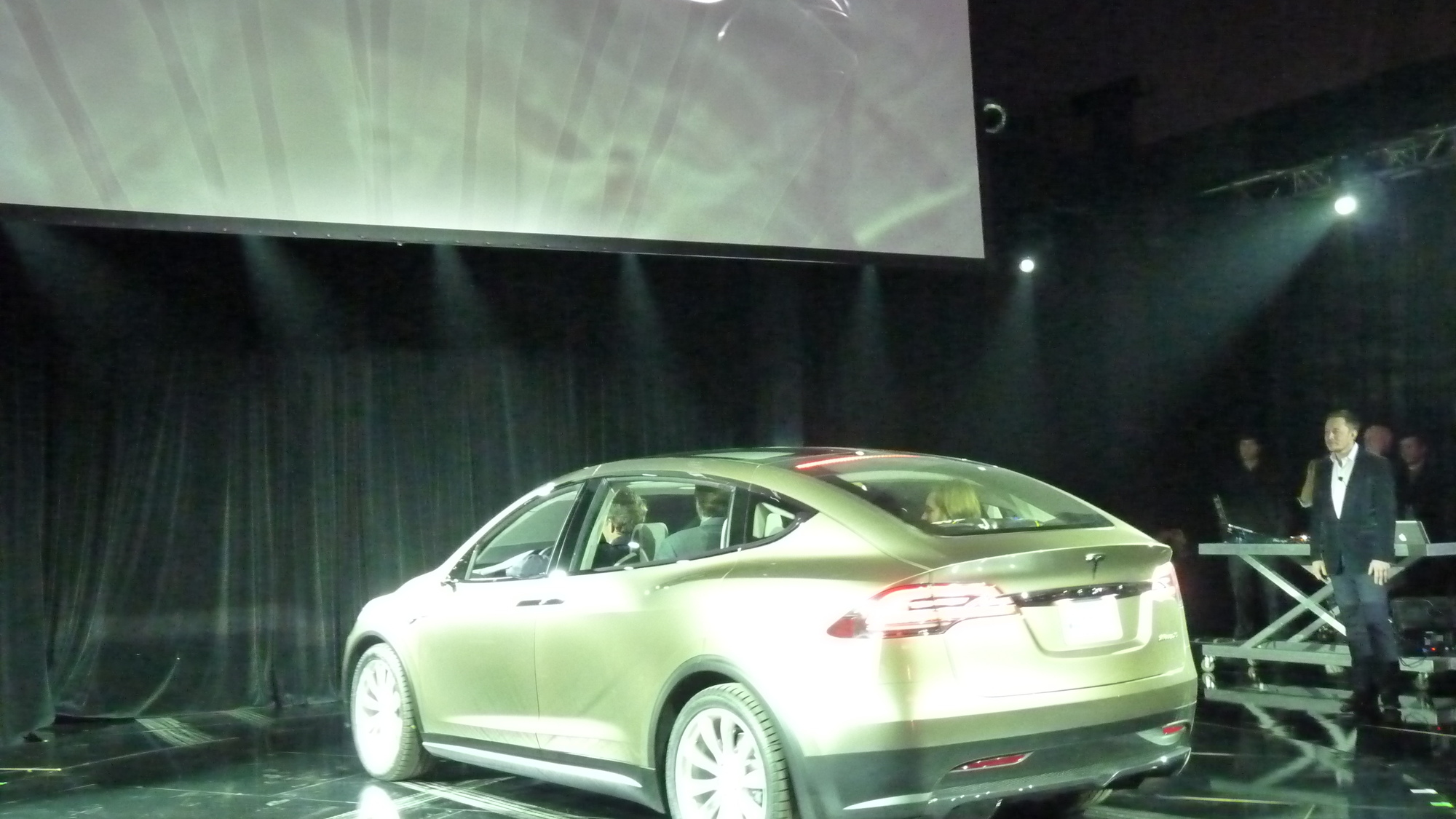 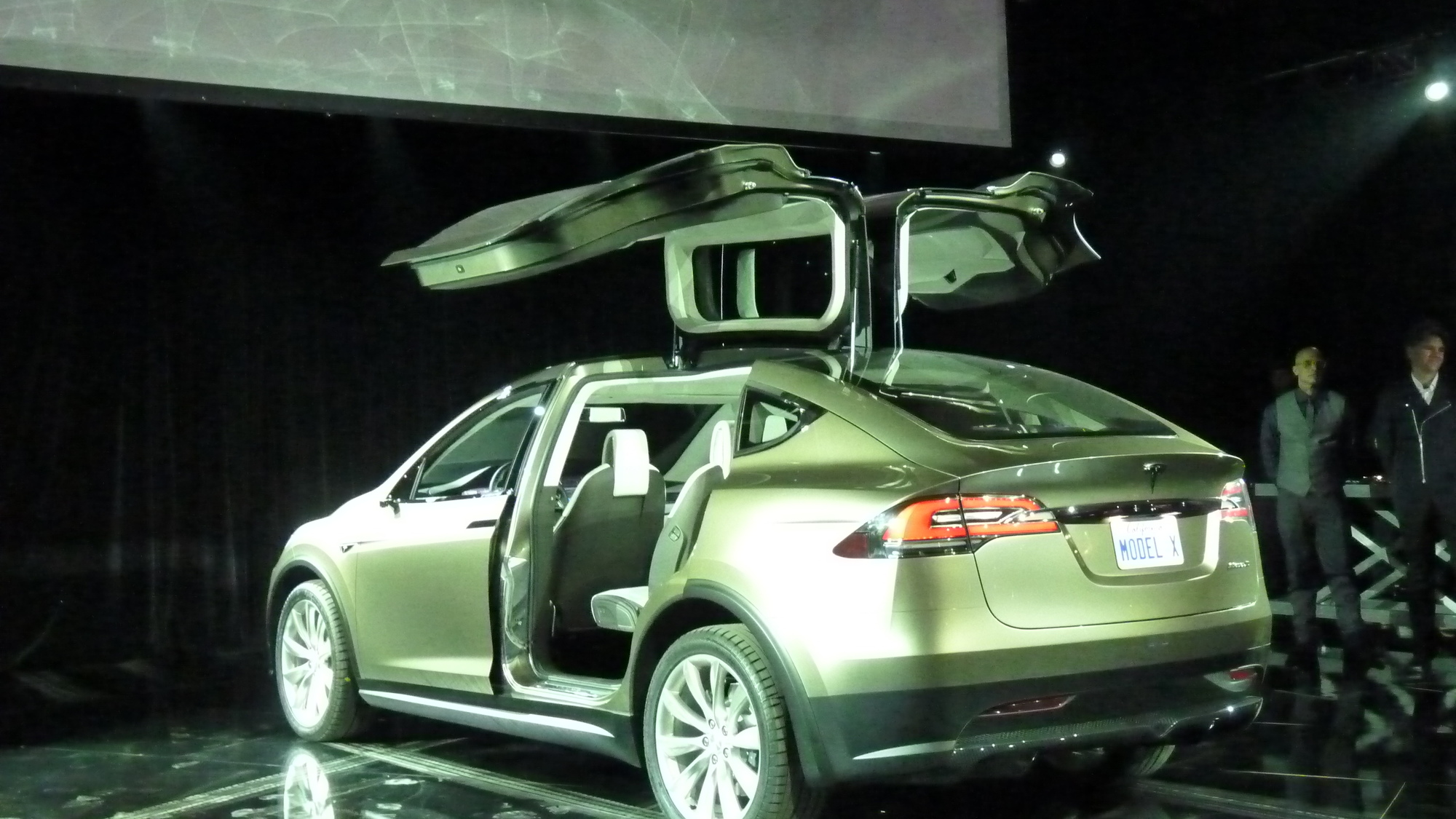 “We’ve got a rocketship next door, and you know as Governor Moonbeam that I like rocketships,” quipped California Governor Jerry Brown, at the introduction of the upcoming 2014 Tesla Model S, gesturing toward the big SpaceX facility next door to Tesla’s Southern California Design Center. “But I also like electric cars.”

Just as Brown has (especially in earlier days) been a political idealist and outlier, Tesla is boldly forging itself a following (and a market), and plenty of interest from the affluent green set, whether or not the mainstream is ready to jump aboard yet.

Falcon wings, faster than a 911

The new, all-electric Tesla Model X crossover, which was introduced on stage by Tesla CEO Elon Musk (also the man behind SpaceX), isn’t exactly a step toward the mass market. But it does take on premium utility vehicles with three rows of seating for up to seven, better maneuverability than a Mini Cooper, and a 0-60 mph time of just 4.4 seconds—that’s faster than a Porsche 911, Musk jeered.

A secondary motion in the falcon doors’ action allows them to open in a way that keeps them very close to the side of the vehicle—requiring no additional garage or parking width. And as soon as you step onto the low floor and attempt to get into the third-row seat—as we captured Musk doing on stage with the following three frames, we see the point: 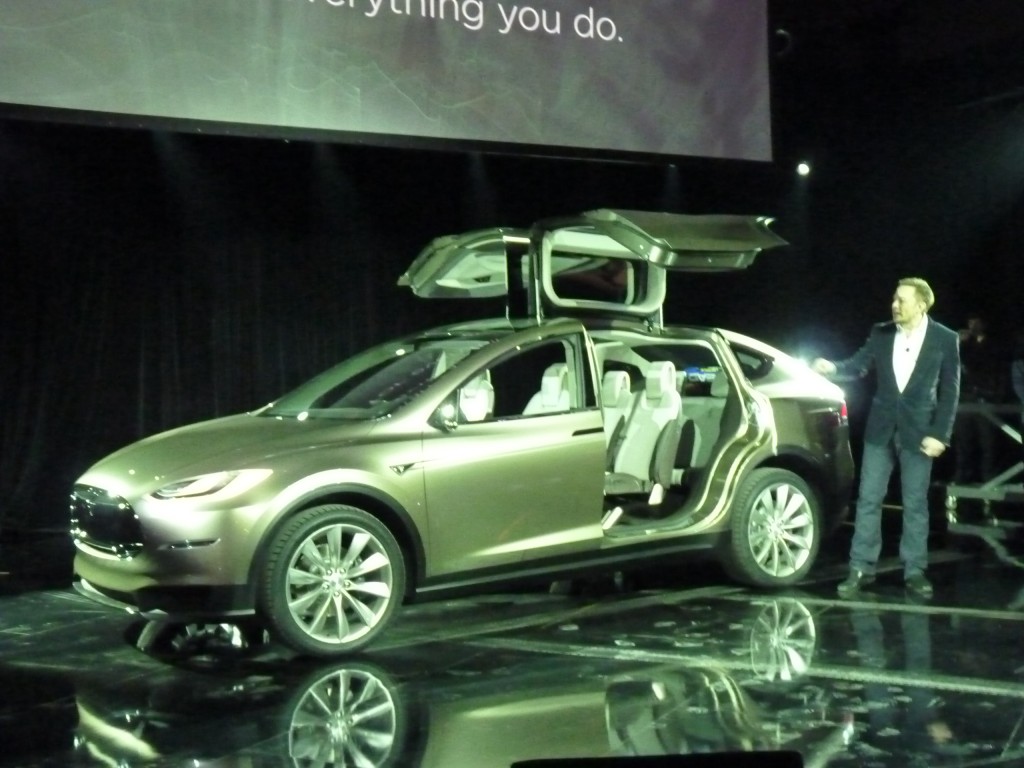 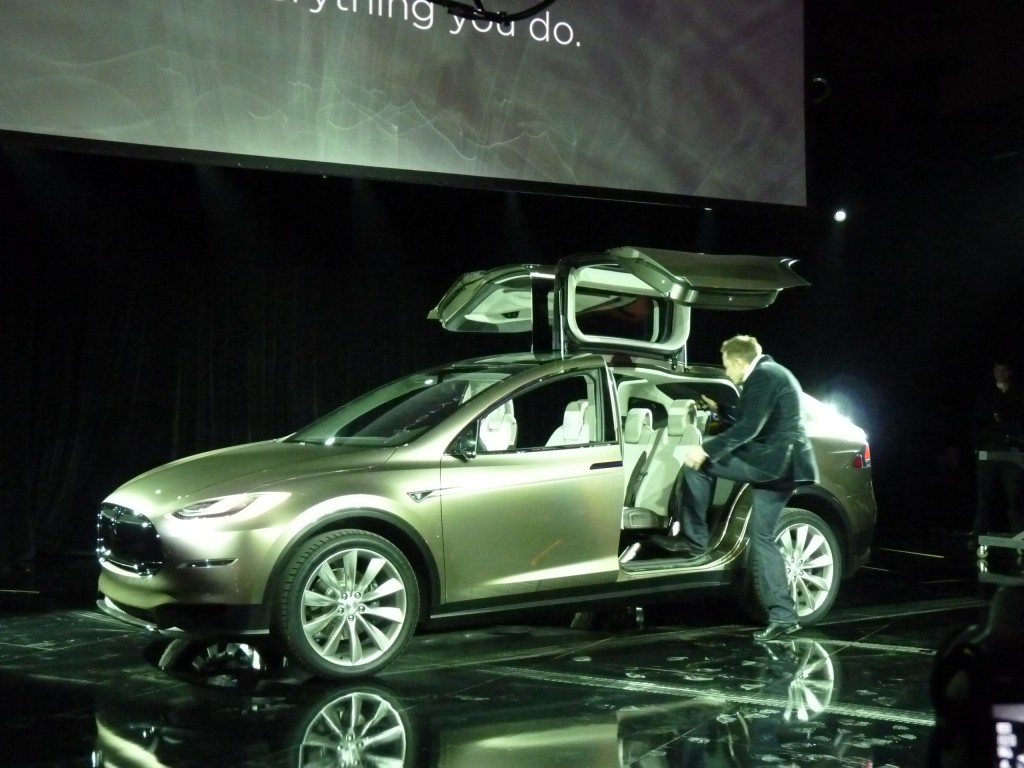 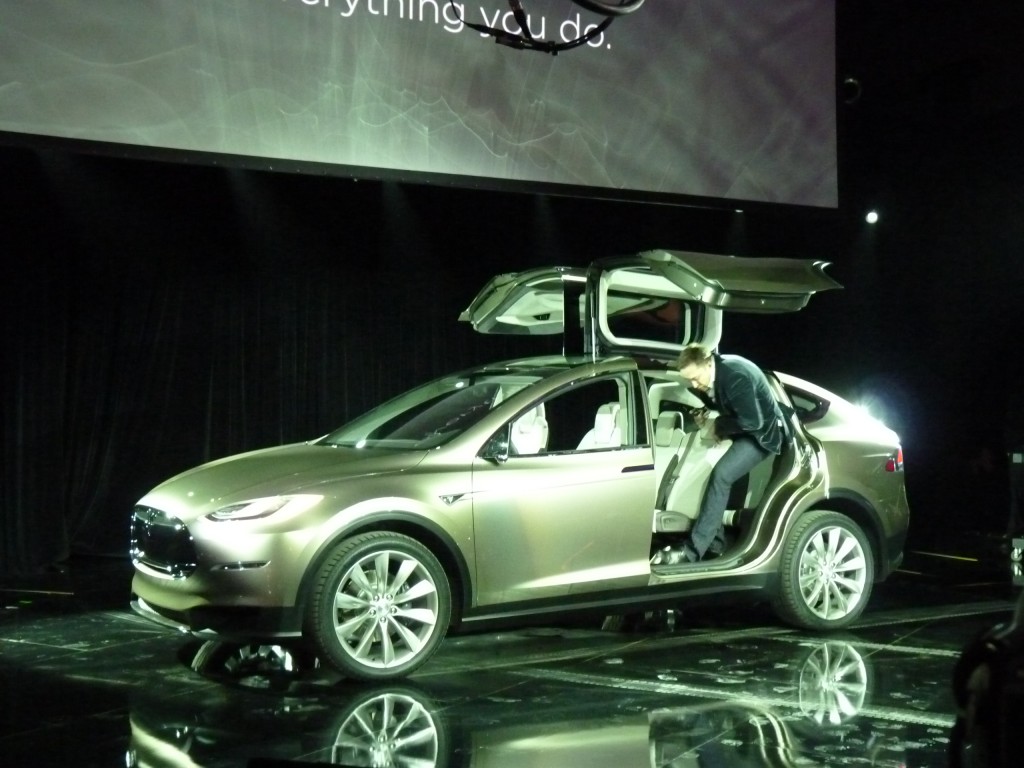 In addition to the third row, Tesla points out that there’s plenty of luggage space even with people in all three rows—both behind the third row, and in a deep front trunk.

Inside, there’s the same beautiful, 17-inch touch-screen system that’s in the Model S. While we still haven’t put that system through the paces, it’s far and wide the best-looking, with the best display quality of any vehicle.

The Model X shares its platform with the Model S, with the battery stored flat just under the floor, but it differs in that there’s a dual motor system—enabling all-wheel drive, without the fuss of mechanical linkages connecting the front and rear axles. Tesla says that its so-called Dual Electric Motor All Wheel Drive will help improve all-weather traction without any sacrifice in efficiency or acceleration.

There’s no word yet on efficiency or driving range, but buyers will have a choice between 60 or 85 kWh batteries in the Model X. No word on pricing, either, but Musk has said that this new model will, as an all-electric luxury crossover, take on gasoline models like the Audi A7 in their own price class—so likely, in the vicinity of the Model S, or a bit more expensive.

Production of the Model X is set to begin in late 2013, with the first deliveries in early 2014.