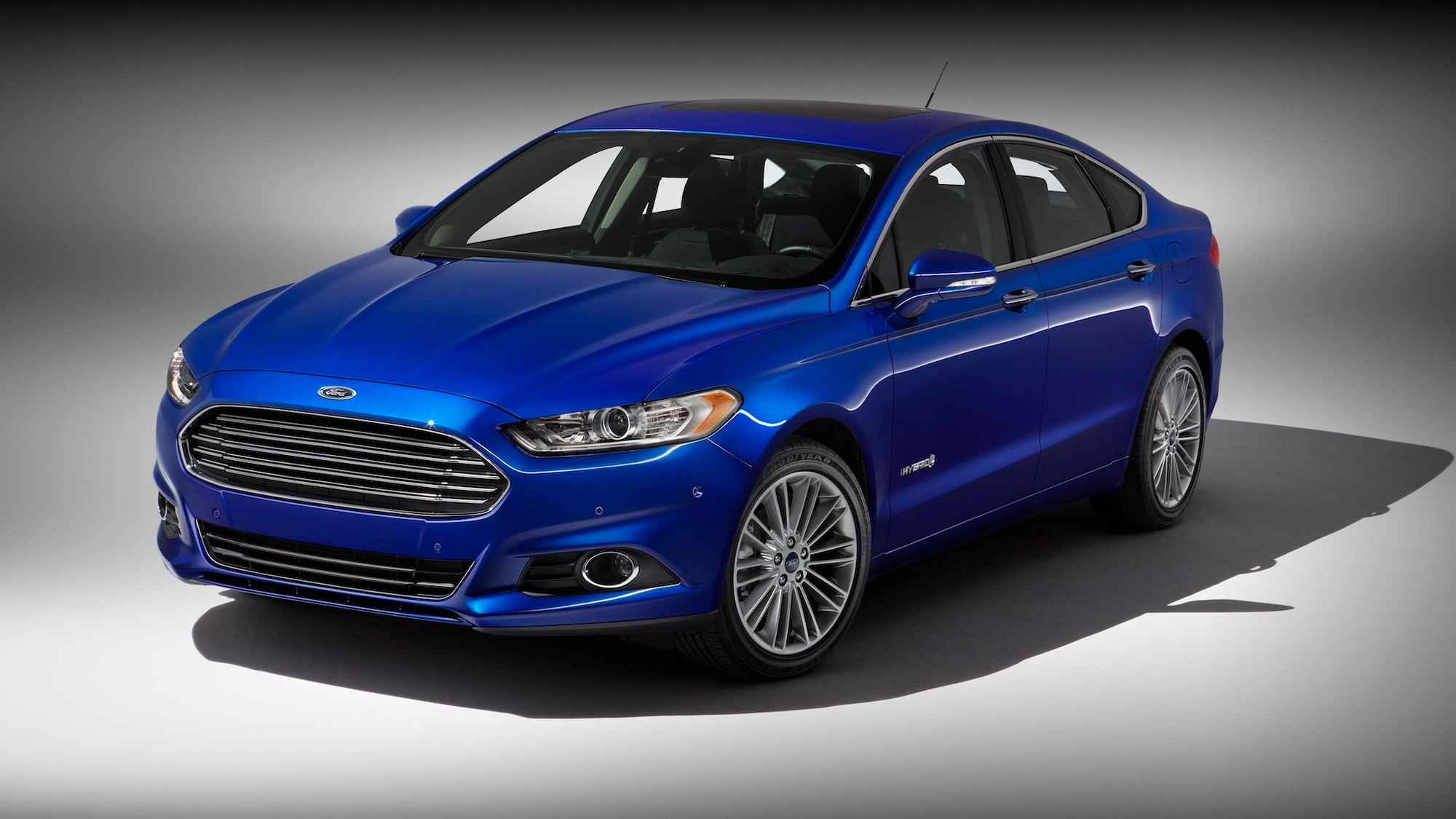 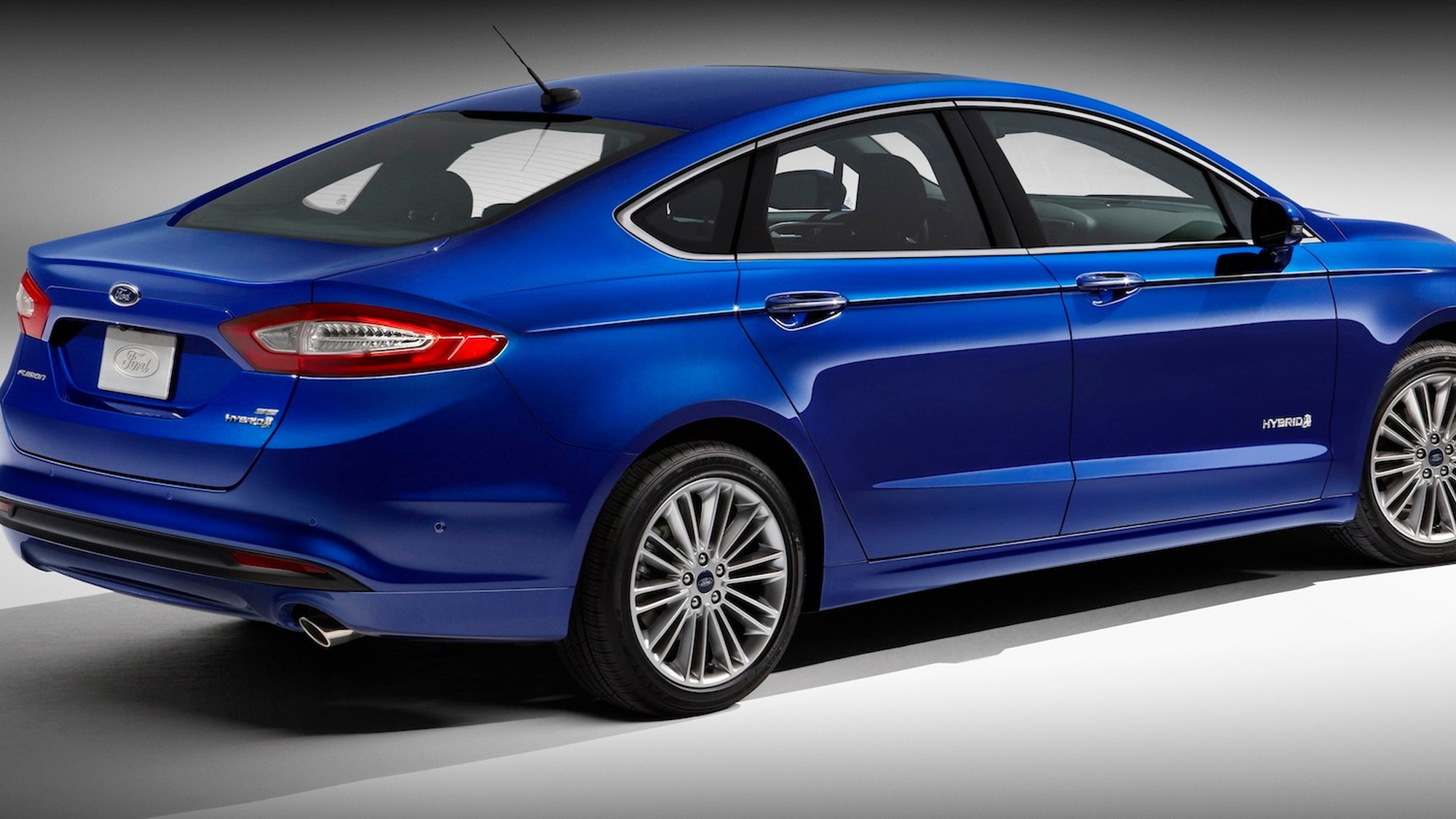 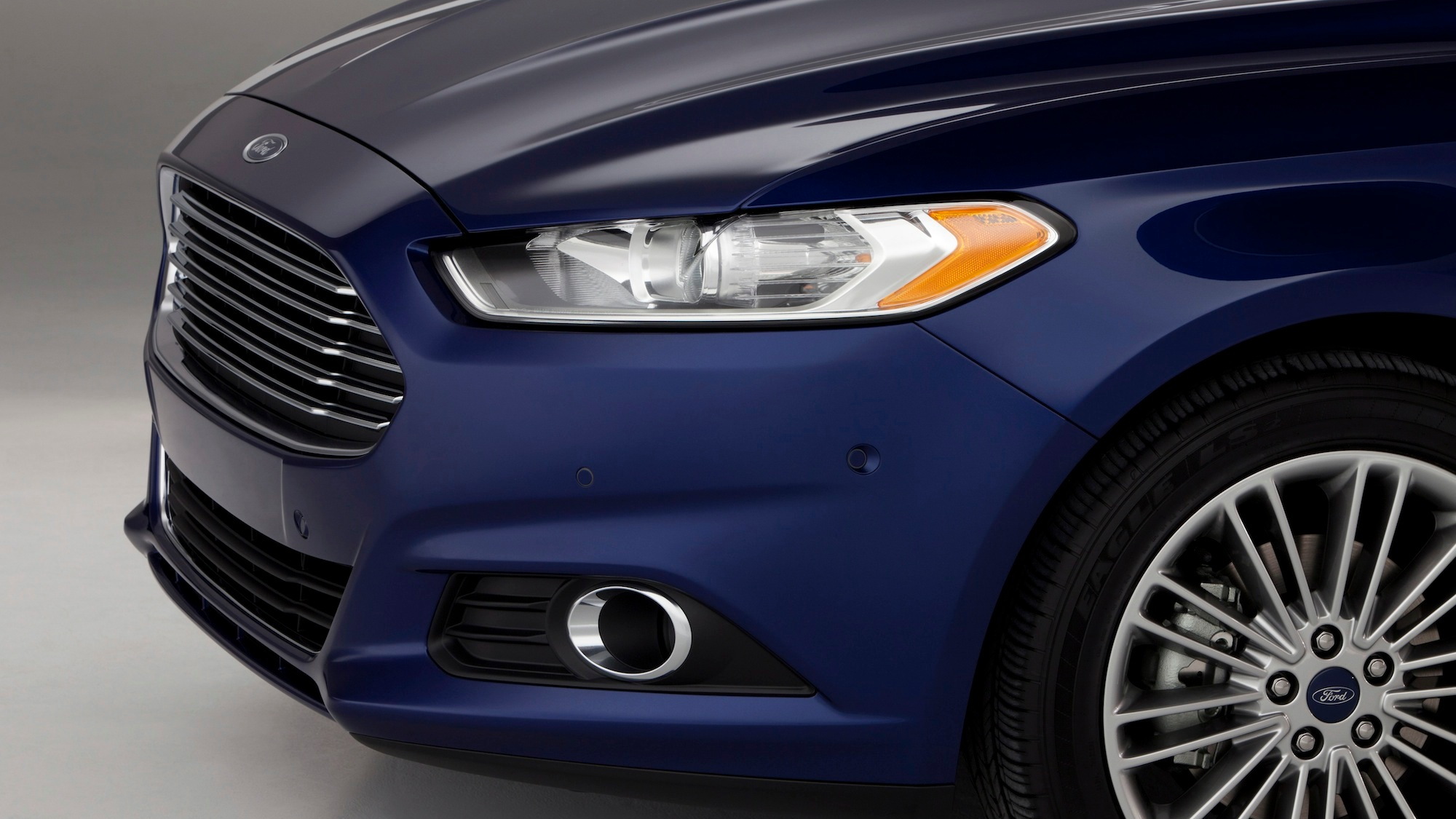 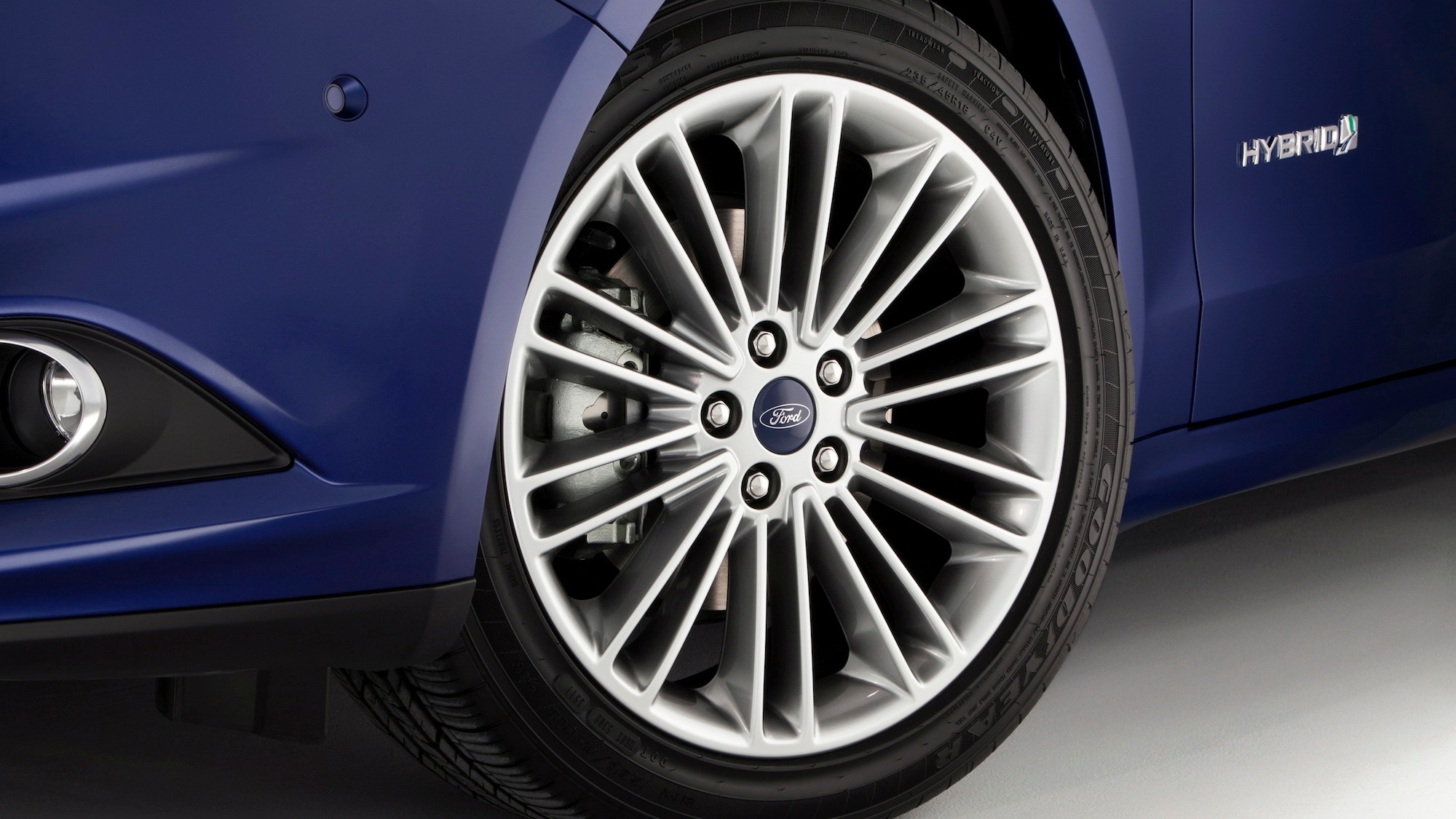 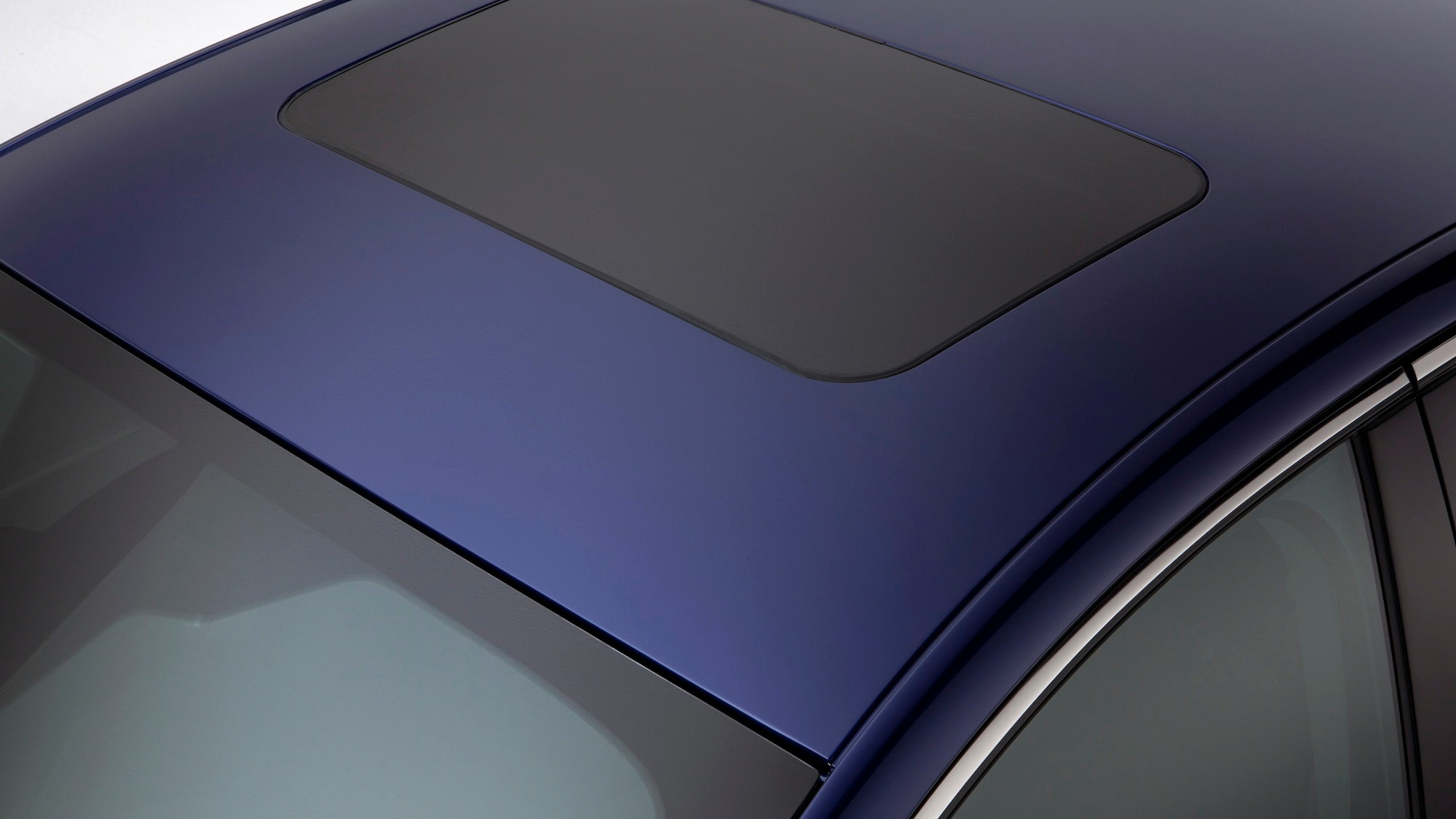 42
photos
Unlike most cars, the current Ford Fusion is selling better now than it has at any time during its eight-year model run.

That's a great lead-in for Ford, which is launching the all-new 2013 Ford Fusion at the Detroit Auto Show.

With a sleeker design, a choice of three four-cylinder engines, plus not only a hybrid but a plug-in hybrid model--the 2013 Fusion is Ford's first mid-size sedan design sold around the world since the 1995-2000 Contour.

The styling of the new Fusion sedan was previewed by the Ford Evos Concept at the Frankfurt Auto Show in September.

The fastback roofline of the 2013 Fusion has echoes of the handsome and well-received Audi A7, along with a strong accent line through the door handles and along the sides of the car that effectively disguises the height of this sedan.

Inside, the cabin is straightforward but stylish, with a European look that concentrates on easy-to-read instruments and a large display screen in the center stack. Thankfully, it is considerably less ornate and highly designed than the overly complex dashboard of the Fiesta subcompact.

The company considers the 2013 Fusion the "next generation of emotive Ford design," and says its front appearance will be the "new global face of Ford" products. And, designers say, the goal was to change the way people think about mid-size sedans.

It's a category that has a number of bland, serviceable, appliance-like products in it--several of the Japanese entries fall into this category--and Ford wanted its Fusion to be daring, distinctive, and appealing.

Based on the applause at a preview event from a generally cool automotive press, we'd say they may have gotten it right.

Ford will offer only four-cylinder engines in the 2013 Fusion, dispensing entirely with the 3.5-liter V-6 option offered in the current car.

This follows the pattern laid down by the 2011 Hyundai Sonata, and since adopted by the Chevrolet Malibu and other cars. Eliminating V-6 engines allows for a smaller engine compartment and less beefy front suspension components, making the car smaller in front of the firewall and lighter overall.

The Fusion's three gasoline engines are a base 170-horsepower, 2.5-liter four plus a pair of EcoBoost fours--a 179-hp 1.6-ilter and a 237-hp 2.0-liter. Note that the largest engine is the least powerful, reflecting the power increase provided by the EcoBoost combination of gasoline direct injection and turbocharging. (All power outputs are estimated.)

As for projected gas mileage, at a preview event, Ford projected 26 mpg city, 37 mpg highway for the 1.6-liter engine with six-speed automatic, which likely translates to a combined rating of about 30 mpg. That compares to the best current combined rating of 26 mpg for the current (non-hybrid) model.

Fusions fitted with the 1.6-liter engine and six-speed automatic, by the way, will be the first Ford non-hybrid vehicles to come with a start-stop system--at a price of $295. This switches off the engine when the car is stopped, then turns it on again as the driver begins to lift off the brake.

Ford says that the real-world mileage increase from such a system is roughly 3.5 percent, and in heavily urban driving, it can go as high as 10 percent.

For the 2.0-liter model, Ford projects 23 mpg city, 33 mpg highway, for a combined rating around 26 or 27 mpg. That's about 25 percent better than the V-6 with equivalent power in the outgoing model, Ford noted.

Gas mileage for the base engine, expected to represent only about 10 percent of sales, wasn't discussed.

For the 2013 Fusion Hybrid model, Ford is using a 2.0-liter four tuned to run on the Atkinson cycle, which is very efficient but produces little low-end torque. Instead, that torque is provided by the electric motor.

The engine is the first one from Ford that is entirely "beltless," with no power takeoffs of any kind and all accessories--not only the air-conditioning compressor, but even the water pump--run on electric power.

On the road, Ford says the new hybrid Fusion can run in electric-only mode up to 62 mph under some circumstances (against 47 mph for the current model).

Best of all, the company projects the fuel economy of the 2013 Ford Fusion Hybrid at 47 mpg city, 44 mpg highway, for a likely combined rating of 46 mpg.

Not only does that outdo the current model's combined rating of 39 mpg, it also beats other mid-size hybrid sedans, including the 2012 Toyota Camry Hybrid (41 mpg) and the Hyundai Sonata Hybrid (37 mpg).

Ford is being oddly cagey about the technical specs of the new hybrid Fusion, saying only that "system power" of the engine and electric motor together is approximately 185 hp. It has not released the output of the hybrid system's electric drive motor, nor the energy content of the lithium-ion battery pack.

And then there's the 2013 Ford Fusion "Energi," the name Ford applies to its plug-in hybrid models.

Its other plug-in hybrid, at the moment, is the Ford C-Max Energi, a five-door small minivan or hatchback. Both the C-Max and Fusion Energi models are likely to be compared to the plug-in Prius, although the 2013 Fusion is a four-door sedan rather than a five-door hatchback.

The Energi is essentially a Fusion Hybrid fitted with a larger lithium-ion battery pack, a 3.3-kilowatt charger, and an external door for the charging port. Again, Ford refuses to say how much energy the battery pack holds, and the company didn't give an electric-only range for the plug-in hybrid Fusion.

So the company's suggestion that the Fusion Energi will be "the most fuel-efficient mid-size car in the world" could be viewed as audacious.

That would make it not only 13 or more MPGe better than the plug-in Prius, but 8 or more MPGe more efficient than the 2012 Chevrolet Volt extended-range electric car.

No doubt Ford will publicize the actual EPA ratings for all five 2013 Fusion powertrain options when they're certified by the EPA. But the new Fusion Hybrid appears to offer the best fuel economy for any mid-size vehicle without an electric plug.

Ford's quite happy about that. Buyers may well be too.

We haven't gotten behind the wheel yet, but Ford claims that the 2013 Fusion will have the handling, roadholding, and driving character of its latest smaller cars, the Focus compact and Fiesta subcompact.

It has carefully tuned its electric power steering to provide life-like feedback, the company says.

As the only mid-size car that now offers all-wheel drive, Ford has tuned that system to be as neutral as possible, without power-on understeer on acceleration.

The company says it's proud of the quietness and refinement achieved inside the new Fusion. It uses active noise canceling in the Hybrid and Energi models, to mask noises that are more apparent in all-electric mode when the engine noise that usually masks them is gone.

Both the front and the rear seats are spacious and accommodate four adults, but front-seat passengers must move their seats forward a few notches to accommodate those rear-seat adults.

Headroom in the rear is compromised by the fastback roofline; a six-foot adult sitting in the rear finds his head within an inch of the scooped-out headliner. But if the car is fitted with a sunroof, he will likely graze his forehead on the headliner surrounding the tray for the retracted roof when he leans forward.

Trunk volume was listed as 15.4 cubic feet for gasoline, Hybrid, and Energi models (slightly less than the current model's 16.5 cubic feet). But the larger battery pack of the plug-in Fusion Energi was clearly visible at the rear of the trunk floor just behind the rear seat-back--so we're not sure about that number for all models.

Shooting for "Best in Class" safety

That means the highest crash safety ratings from both the National Highway Traffic Safety Administration (NHTSA) and the Insurance Institute for Highway Safety (IIHS).

Until those ratings emerge, Ford notes that the 2013 Fusion has eight airbags standard--front, side, and knee bags for front-seat passengers, and side curtains that cover the entire window opening front and rear--for all four outboard passengers.

As befits an all-new 2013 model, the new Fusion will offer a raft of electronic systems--both standard and optional--to deliver better safety, infotainment, and fuel efficiency.

The well-received Sync system is standard, with an updated version of MyFordTouch optional. The revisions are meant to address widespread criticisms that MyFordTouch was slower to respond to voice inputs than the original Sync, and its screens were too cluttered.

Adaptive cruise control is available, as is a new driver-alertness monitoring system that will startle the driver and flash a cup-of-coffee icon if it senses the driver's attention and altertness waning. Ford's blind-spot information system makes a return.

A pair of new features on the Fusion are the company's easy-to-use Active Park Assist (which parallel parks the car into a space it senses, operating the steering while the driver accelerates and brakes) and a combination of Lane Departure Warning and Lane Keeping Assist.

The first alerts the driver if the car drifts across a lane marker without turn signals being used or the driver turning the wheel, while Lane Keeping actually steers the car back into the lane. Ford stresses that the strength and intensity of the system's warnings and reaction times can be set by the driver.

Finally, Ford has fitted the 2013 Fusion with a new feature: a Hill Start Assist that engages the brakes to hold the car in place on a sloping road until the driver accelerates away. It's active for both manual and automatic transmissions, and modulates the brakes enough to prevent rollback when pointing uphill.

Ford says the 2013 Fusion and Fusion Hybrid will arrive at dealerships this fall, with the Fusion Energi model to follow "a bit later".