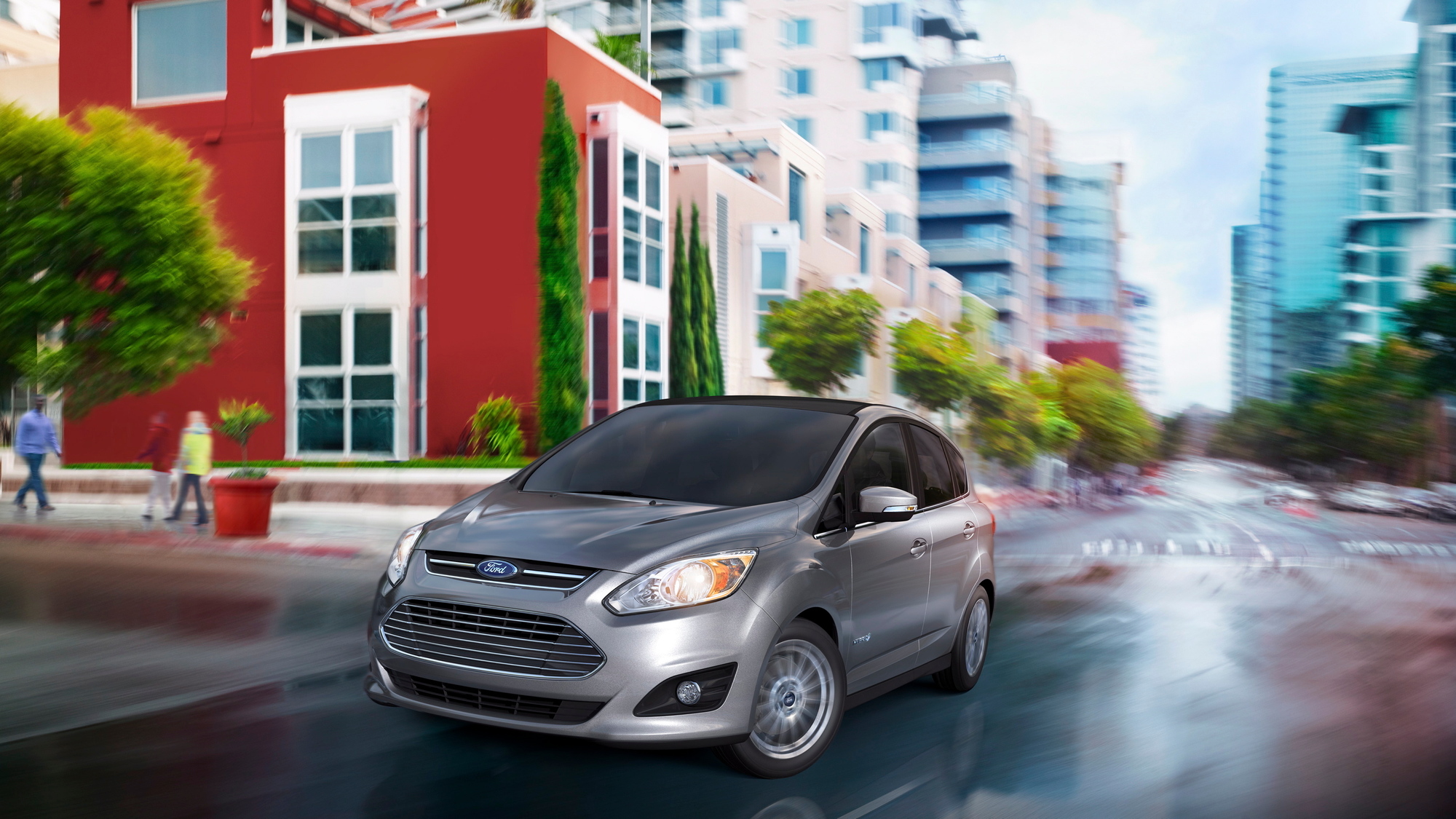 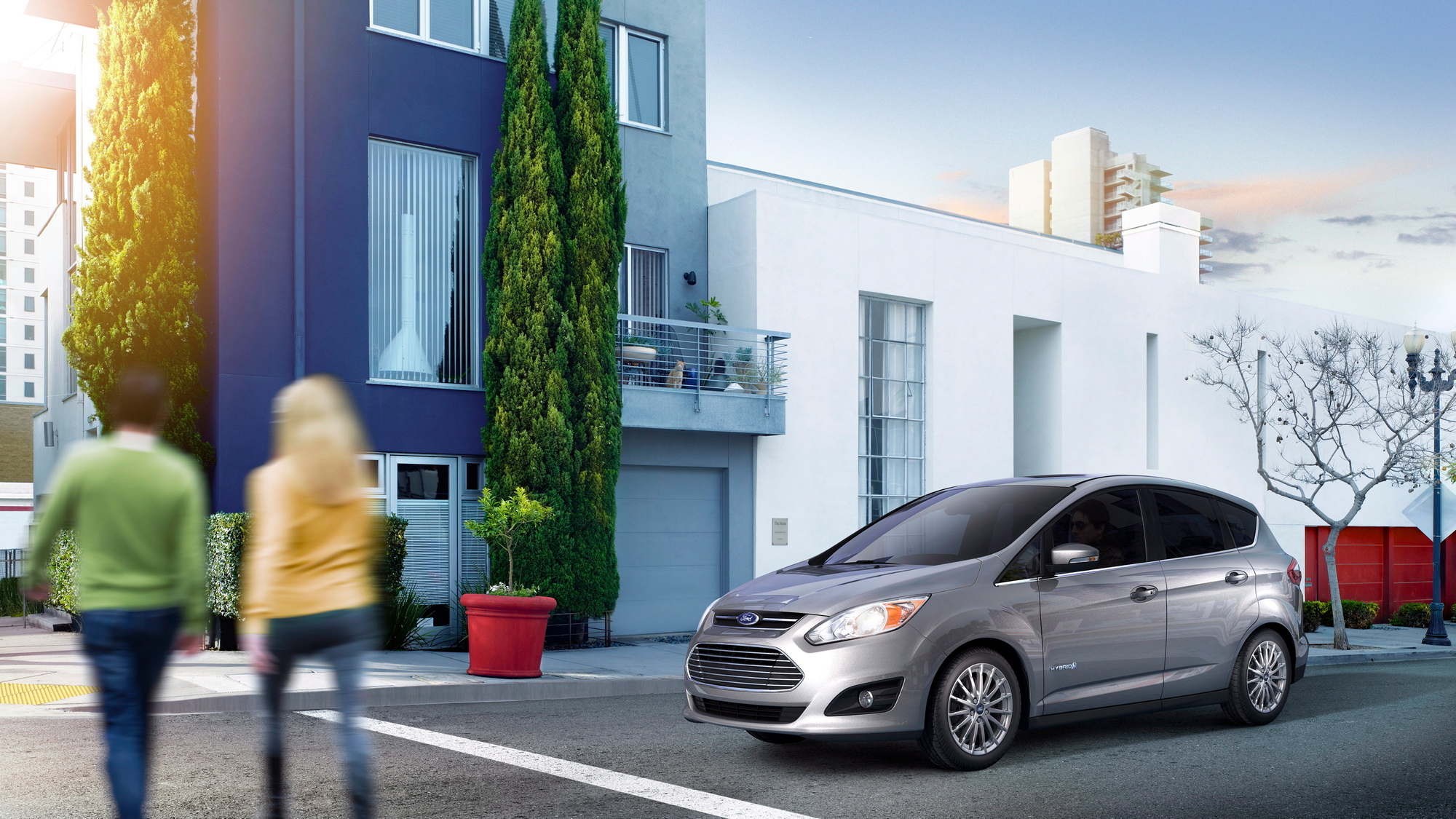 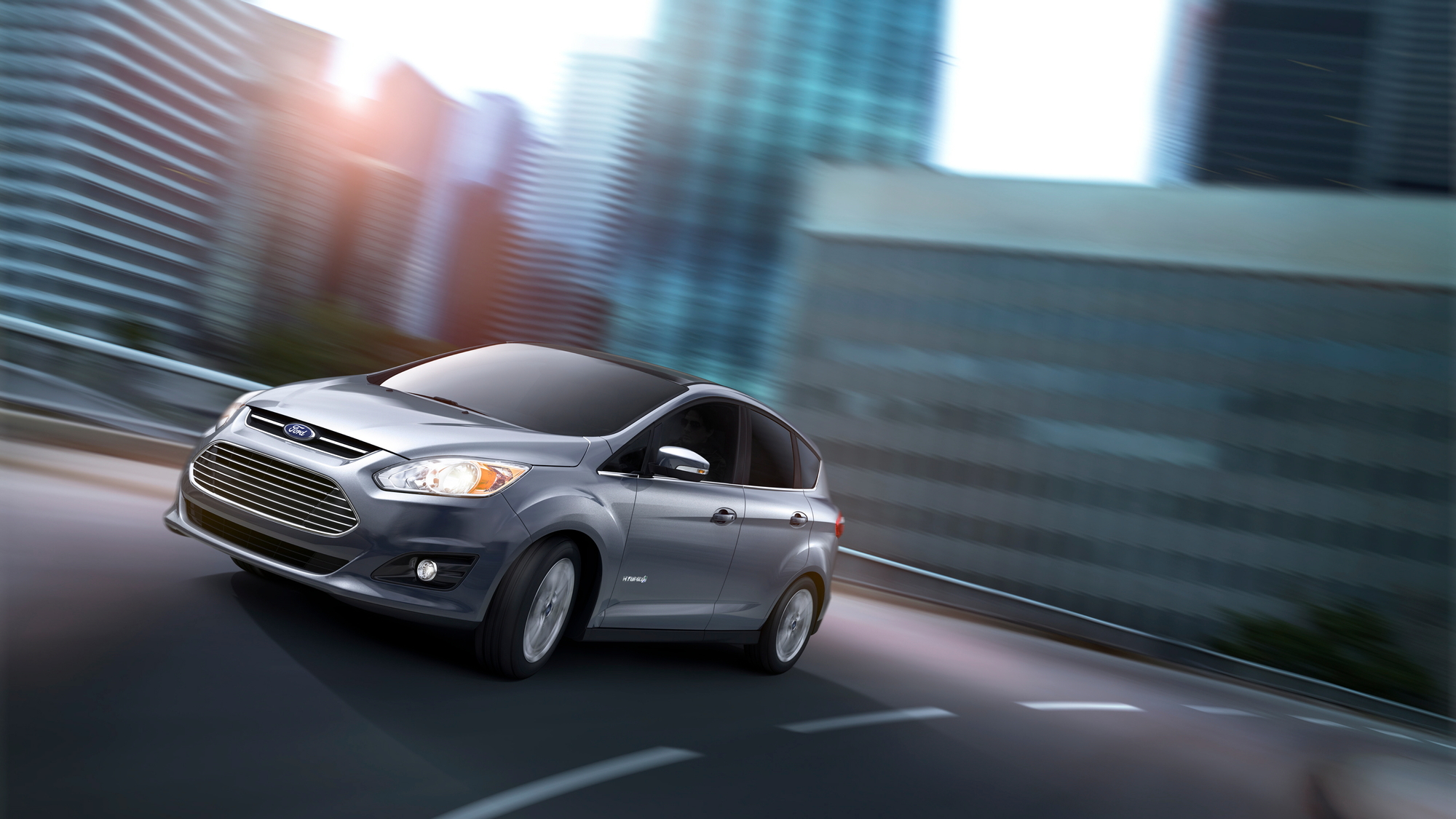 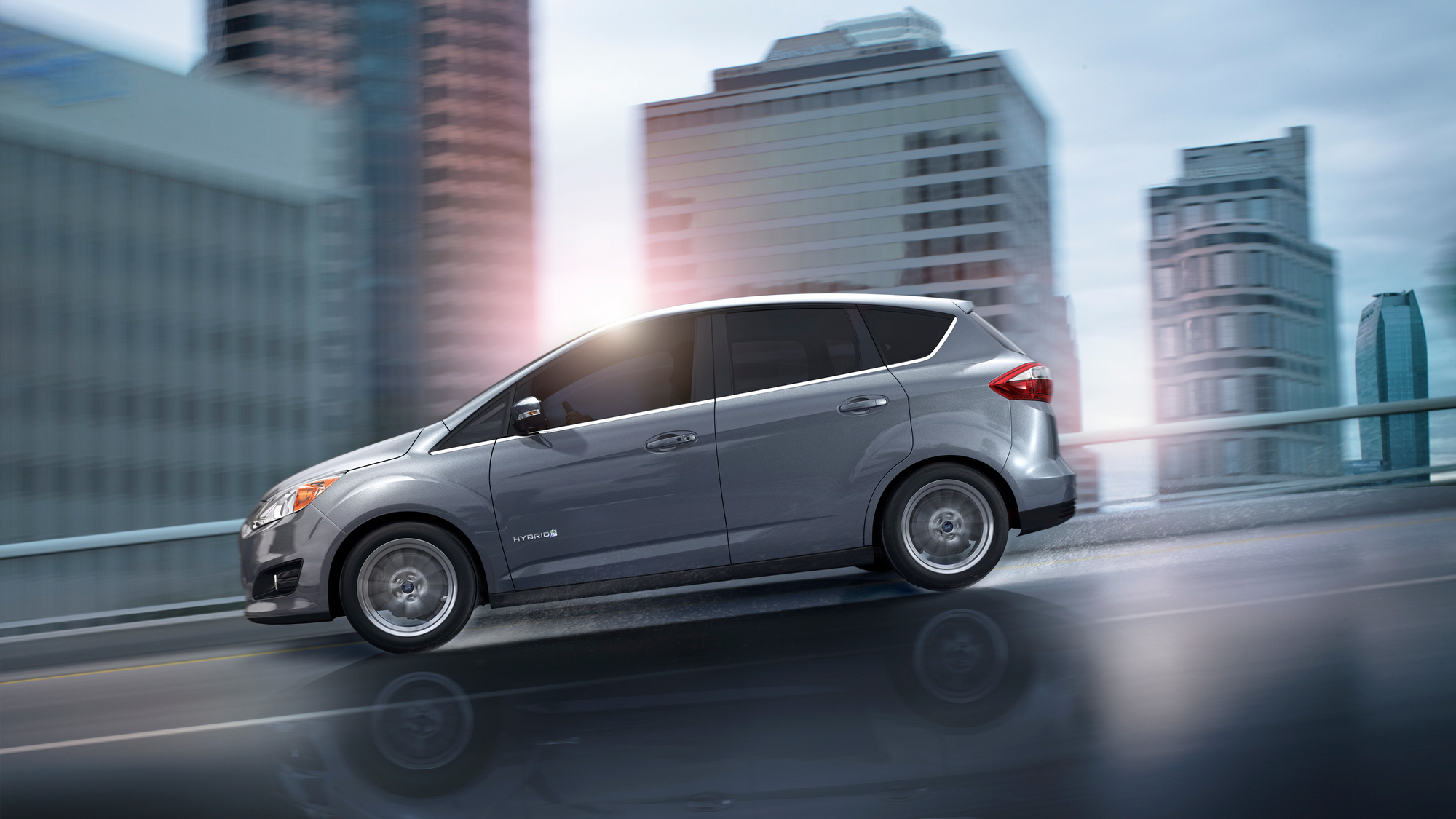 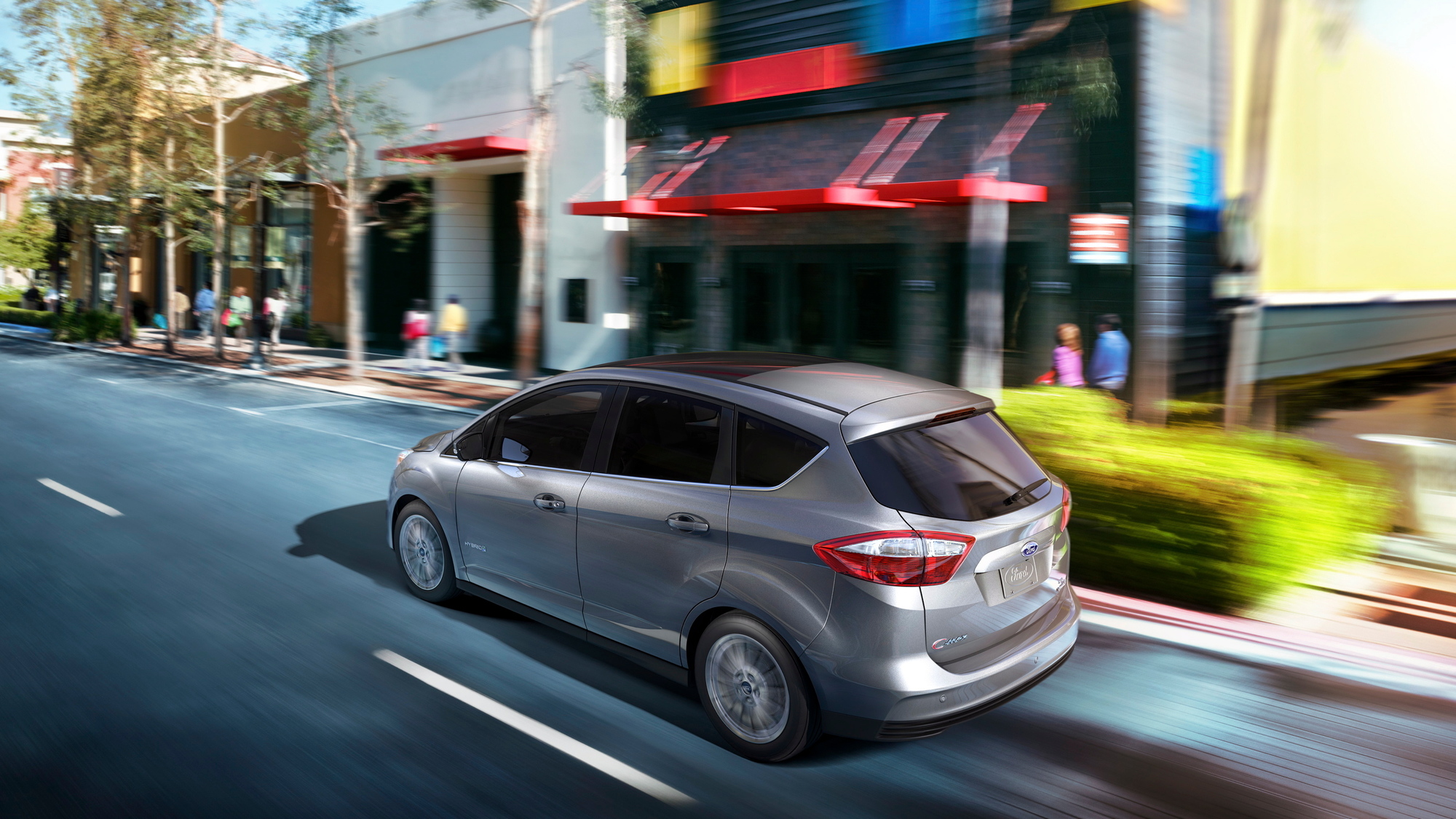 The new Escape crossover arrives at dealers in mere months, minus the hybrid model of its predecessor.

That means it's now time to talk about the new 2013 Ford C-Max Hybrid, which will serve as the company's hybrid entry in the compact segment.

The 2013 C-Max is a five-passenger small minivan or "multi-activity vehicle" (Europeans call it a "people carrier") that will be offered only as a pair of hybrid models, giving Ford a dedicated hybrid five-door like Toyota's iconic Prius--a vehicle without a gasoline-only model.

Like the Prius, the new compact vehicle will also offer a plug-in hybrid variant, called the Ford C-Max Energi. It will be Ford's first plug-in hybrid, though likely not the sole such vehicle within its global lineup.

Both 2013 C-Max versions will use the next generation of Ford's hybrid-electric drive system. But unlike the current 2012 Escape Hybrid and Fusion Hybrid models, which use a 2.5-liter engine, the 2013 C-Max hybrids will use a smaller, 2.0-liter four-cylinder engine.

Like most engines in full hybrids, it has been adapted to run on the Atkinson Cycle--meaning it burns gasoline very efficiently but has little low-end torque, which is provided instead by the hybrid system's electric motor-generators.

Like Toyota and General Motors, Ford's hybrid system uses a pair of motor-generators within an electronically continuously variable transmission, allowing the engine to run at its most efficient speed.

This new-generation hybrid system in the C-Max, however, is the first to use a lithium-ion battery pack, which is smaller and lighter for the same energy capacity than the older nickel-metal-hydride packs used in all Ford hybrids to date.

More specifically, Ford projects that the C-Max Hybrid will earn higher ratings than the 2012 Toyota Prius V wagon. The EPA rates the Prius V at 44 mpg city, 40 mpg highway, for a combined rating of 42 mpg.

If that happens, besting the gas mileage of Toyota's newest Prius model in a similar package--a five-door wagon-like hybrid vehicle with five seats--could be considered something of a coup for Ford.

It also claims a driving range of more than 500 miles for the Ford C-Max Energi plug-in, between the range provided by the larger battery pack and that from the engine and electric drive operating as a standard hybrid system once the plug-in range has been depleted.

The Energi's charging port door is on the left front fender; like all such plug-in hybrids, it can recharge either on standard 120-Volt household current or through a dedicated 240-Volt charging station, which Ford will make available through its dealers.

The company's engineers have worked on improving the efficiency of every part of the hybrid system. Ford claims that more than 95 percent of the energy that would be wasted through braking in a conventional car is recaptured to charge the battery pack in the C-Max hybrids.

The C-Max twins represent a type of vehicle that's common in Europe, though not much seen so far in the States. The closest models from other makers are probably the Mazda Mazda5 small minivan and the now-discontinued Kia Rondo.

At 64 inches tall, the C-Max driver sits higher than in a compact car like the Focus, offering the "command position" so appealing in crossovers. The C-Max Hybrid has 25 cubic feet behind the rear seat, 54 cubic feet with the second row folded flat.

The larger battery pack in the C-Max Energi plug-in hybrid, however, cuts those volumes to 19 cubic feet behind the second row and 43 cubic feet with the rear seat folded down.

Coaching drivers on how to brake

Ford's well-regarded hybrid instrument cluster and informational graphics, first seen in the 2010 Fusion, have been updated for both models of the 2013 C-Max. They're also integrated with the optional MyFordTouch voice-activated infotainment and vehicle control system, powered by Sync.

New to the system is the active Brake Coach, which guides drivers in how to maximize use of the regenerative braking to recapture the maximum amount of energy while slowing the car. The graphics show when energy is being wasted by braking hard enough to require the friction brakes to engage as well as the regeneration.

As before, those who drive most efficiently will see green leaves slowly growing on a vine in the right half of the instrument cluster. Other drivers, who may find that idea supremely annoying, can suppress the display.

Like the new Escape, the C-Max hybrids offer a hands-free liftgate that lets the driver (with the key fob in a pocket) wave his or her foot below the bumper to open the rear hatch automatically.

The C-Max hybrids come with seven airbags, and a variety of electronic safety technologies. Those include torque vectoring to guide the vehicle better through corners, and curve control to slow it if the driver enters a corner too fast.

It includes Ford's MyKey technology, which limits vehicle functions for teen drivers using a designated key. And its Sync 911 Assist automatically contacts an emergency dispatcher if the car's airbags deploy, assuming the driver is carrying a switched-on mobile phone that's been linked to the Sync system.

By 2013, Ford says it will have tripled its capacity to build electrified vehicles (hybrids, plug-in hybrids, and battery electric vehicles).

The company has built about 40,000 hybrids a year since the launch of the 2010 Ford Fusion Hybrid, so it will likely build 100,000 or more of its five hybrid and electric models.

The pair of C-Max hybrids will arrive at Ford dealers during the second half of 2012. They'll be manufactured in the same Wayne, Michigan, assembly plant that builds Ford Focus compact sedans and hatchbacks.