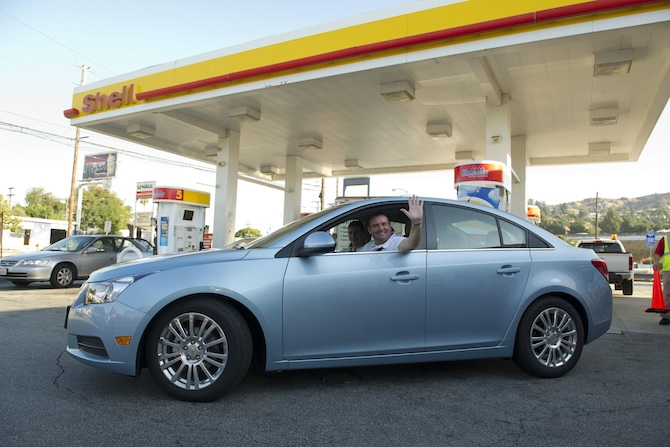 John and Helen Taylor aren’t like most ordinary tourists. The Australian couple is driving across the United States for the third time in less than five years, but they’re not here to visit the Grand Canyon or Mt. Rushmore.

Instead, the Taylors are here to break their own contiguous 48-U.S.-state hypermiling record, set in 2009 behind the wheel of a 2009 Volkswagen Jetta TDI. Back then, the couple averaged 67.0 mpg on a trek that took them over 9,505 miles.

This time around, they’re hoping to beat their record behind the wheel of a 2011 Chevy Cruze Eco. The route is nearly 9,600 miles long, and their goal is to squeeze the best fuel economy possible from each tank of gas.

The actual route mileage and fuel economy won’t be revealed until after the trip is over, but the Taylors estimate they’re getting better than a 46 mpg combined average so far. That’s not enough to beat the fuel economy of their Volkswagen Jetta TDI, but the trip has only just crossed the halfway point. If you want to monitor the couple’s progress, Shell has set up a website to show their progress.

Hypermiling is a potentially dangerous way of driving, especially in the speed-obsessed United States. Hypermilers accelerate gradually, up-shifting at the first possible opportunity and coasting to a stop at red lights to preserve as much momentum as possible. On the highway, they maintain a steady 55 to 60 miles per hour, regardless of posted speed limit. Some even draft tractor-trailers to boost fuel economy, a practice that is at best, illegal, and at worst, downright dangerous.

The Taylor’s are focused on safety and sponsored by Shell Oil and Chevrolet, so we’re confident that they don’t engage in any potentially dangerous driving habits. We wish them luck on their journey, and can’t wait to hear what kind of fuel economy they can squeeze from the Chevy Cruze Eco.