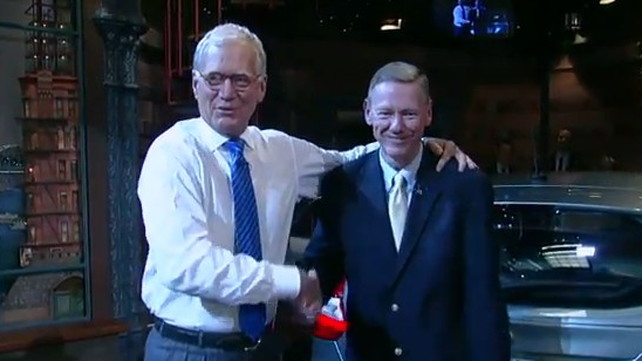 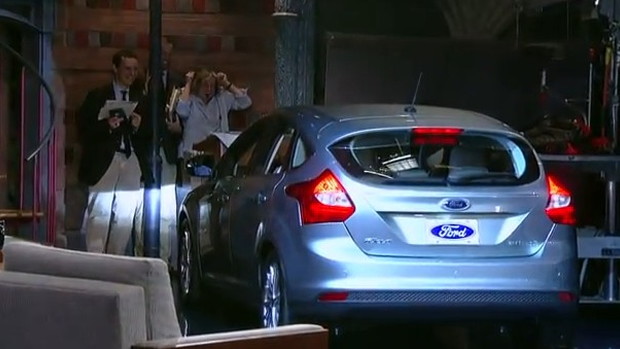 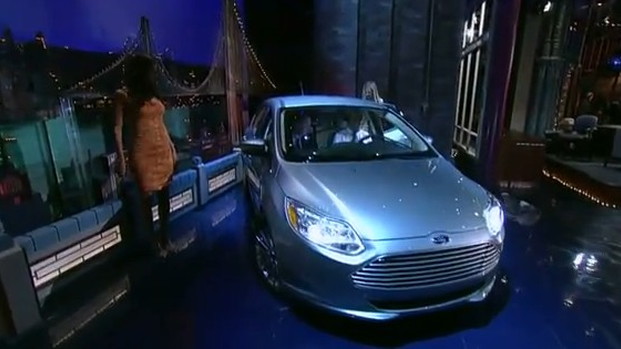 You’re the CEO of a global automaker who has just been invited to appear as a guest on the internationally renowned Late Show With David Letterman to talk about your new electric car.

But rather than just talk about it, why not bring the car along too?

And then let the show’s host drive it across his set.

Unveiled earlier this year at the 2011 Consumer Electronics Show in Las Vegas, Nevada, we’re still waiting for a final sticker price, but Mulally hinted that the 80-mile five-seater would be ‘highly competitive’ in its pricing.

Of course, this isn’t the first time the Late Show has covered electric cars. Back in 2006, Letterman talked to actor and electric car advocate Tom Hanks about his all-electric RAV4 EV, and in 2009 Letterman joked around with Tesla CEO Elon Musk when he was given a chance to get up-close and personal with an early prototype of the 2012 Model S.

Yesterday’s interview with Mulally was more refrained however, without any jokes about being electrocuted or worries that his ‘gentleman parts’ would be magnetized.

“I brought two electric cars. Neither one are manufactured int he United States of America,” Letterman told a relaxed Mulally. “Neither one are American brands. What’s the problem?”

“It also has a family of a hybrid, plug-in hybrid and electric, so you can get what you want that works for your lifestyle,” Mulally  enthused as he let Letterman drive drive across the stage to the sound of Eddy Grant’s 1982 hit Electric Avenue.

The Late Show isn’t the first time we’ve seen an electric Ford Focus on screen either. In 2009 its rival The Jay Leno Show included a segment called Jay Leno’s Green Car Challenge, in which celebrities drove a custom-made Ford Focus around a small track to see who could be the greenest driver.

Unlike the recent BBC Top Gear episode featuring the 2011 Nissan Leaf and 2011 Peugeot iOn/Mitsubishi i, we’re convinced the Late Show’s latest coverage of electric cars can’t be anything but positive.

What do you think? Let us know in the Comments below.