The Tesla Roadster is known among gearheads and electric car advocates as being the sports car  that smashes all preconceptions about electric vehicles. So when Tesla announced its aptly-named revision to the iconic all-electric car we just had to see if the Californian-based automaker could beat the iconic first and second generation models.

And we’ve just had our first chance. Courtesy of Tesla UK, we were loaned a 2011 Tesla Roadster Sport 2.5, in Lightning Green, a new color for the 2.5 models.

In a resplendent Lightning Green, the 2011 Tesla Roadster Sport 2.5 creates an air of luxury from the outset. With a revised grille, redesigned wheel  arches and sporty new black alloy wheels, the 2.5 revision of the Roadster Sport looks more aggressive. Set off by a contrasting black carbon-fiber hood it begs to be driven hard and fast. 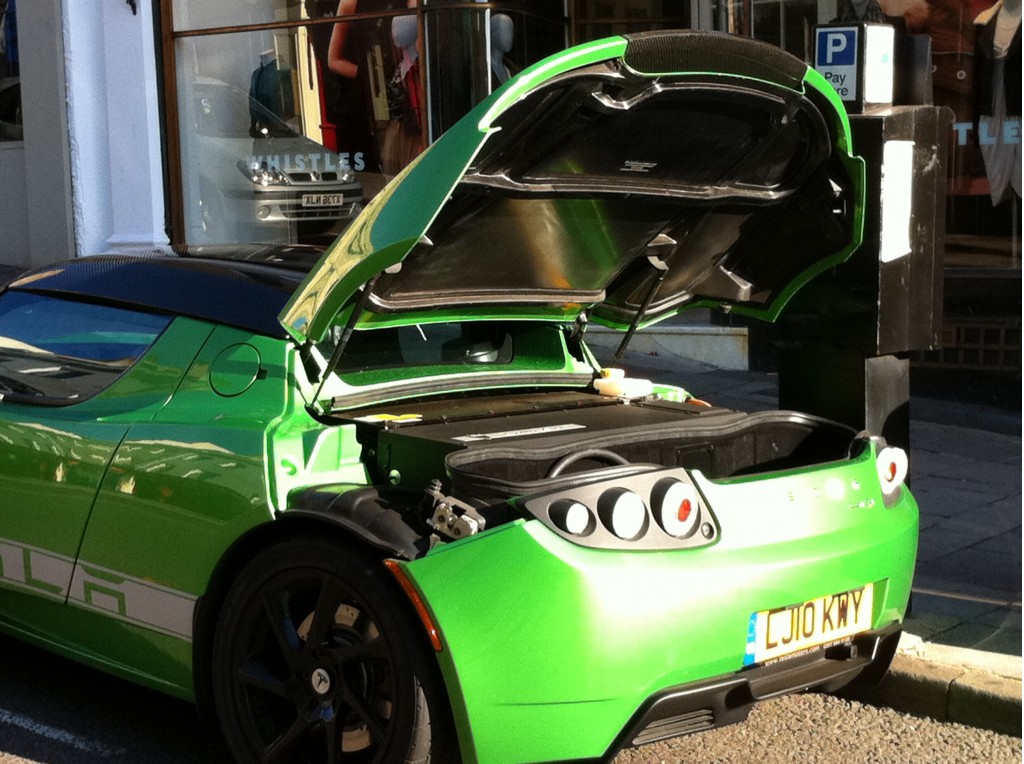 Pop open the trunk with the remote release on the oval-shaped three-button remote fob, and a larger trunk space presents itself compared to previous versions. This is thanks to Tesla’s revised power electronics which are now housed in a slightly smaller package and have been since the 2.0 revision.

The difference? Only a few inches of extra space, but it confidently swallowed up camera equipment, laptop bag and motorcycle gear from earlier on in the day.

As one of the Tesla London employees reversed the loan car into the street, its front spoiler ground a little on the gentle slope out onto the sidewalk. If that isn’t enough to remind you that this car sits a scant few inches above the ground then getting in will. Just like so many sports cars, gaining access to the passenger seat is entertaining. Sliding in behind the wheel should be an olympic sport for the uninitiated.

But with a little practice entering and exiting the Roadster becomes easy. Right foot in under the wheel, followed by a shuffle and swing into the driver’s seat. The entrance is then finished by grabbing the remaining foot and tucking it under the dash.

Don’t think this is a small person’s car, however. While the art of getting in and out takes some practice to be accomplished gracefully once inside the Roadster has plenty of room, even for our six-foot-four cameraman.

Easing out of the London showroom into a congested Friday afternoon rush-hour isn’t the most ideal of environments to get aquainted with the $128,500 two-seater, but thanks to the 2011 Tesla Roadster Sport 2.5’s new satellite navigation system the car was  soon out of the congested streets of the exclusive west-end and on the freeway heading west.

Unlike many high-performance cars, the 2011 Tesla Roadster Sport 2.5 is mild-mannered around town. Thanks to a single-gear, the car drives like an automatic, complete with creep function, making stop-start driving easy. At higher speeds, the Tesla’s regenerative braking mimics engine braking, makes it possible to drive around the city using just the accelerator to control the car. Our John Voelcker affectionately calls this single-pedal driving.

At low speed, the Roadster is beautifully quiet. While there’s an ample sound system fitted as standard, the noise of the 185 215 kilowatt motor somewhere behind the driver is  a sound most will not tire of and driving without the stereo on will become common among even the most avid of music-fans.

With the classic sports car looks, the 2011 Tesla Roadster Sport 2.5 has a rather large posterior, and consequentially not great rearward visibility for reverse parking.  Although the semi-blind reverse parking is something Tesla owners can get used to, the 2011 Tesla Roadster Sport 2.5 lends a helping hand with a rear-facing camera located just below the licence plate. This gives the driver an uninterrupted view behind the car on the navigation screen and helps avoid any nasty dents to the Roadster’s carbon-fiber body. 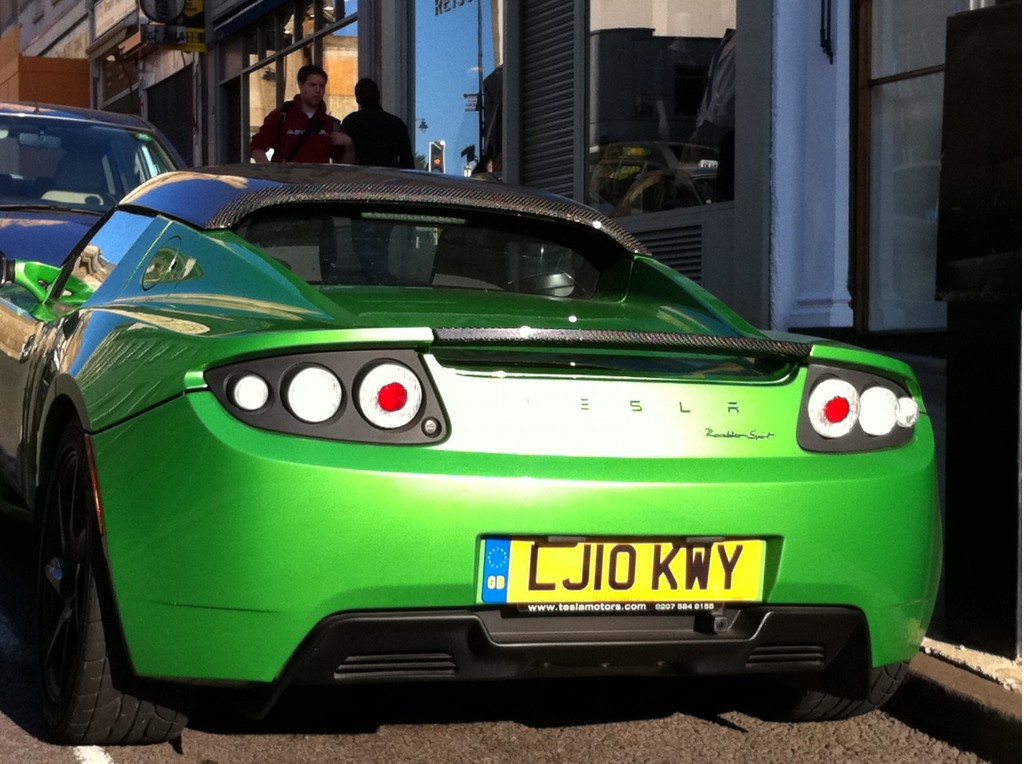 Also apparent at low speed is the lack of power assisted steering. As with many sports cars, the 2011 Tesla Roadster Sport 2.5 has a direct, non-assisted steering which gives a precise feel at higher speeds, but requires some extra effort for low speed driving.

Leaving the city limits and heading out of town on the freeway, the 2011 Tesla Roadster Sport 2.5 starts to show a split personality.

With cruise control set, satellite navigation engaged, re-designed heated seats set to full and the stereo playing, you’d be forgiven for thinking it was just another commuter car. The 2011 Tesla Roadster Sport 2.5 even features a cup-holder, something Tesla executives added for the 1.5 revision upwards after hearing from many owners that the Roadster had become the car of choice for the daily commute.

Something as benal and every-day as a cup-holder may not seem like a feature worth writing about until you realise that just about every sports car on the market today views heated seats and cup-holders as frivolous excesses that can be excused in a car built for speed.

Don’t let the comfort fool you. Push the accelerator to the floor and Tesla’s legendary drivetrain responds instantly with a hearty punch you in the back, pushing car and occupants forward with unrelenting speed.

Driven hard, the 2011 Tesla Roadster Sport 2.5 is the antithesis of its mild-mannered self, unleashing an inner devil capable of causing all but the most hardened of race-drivers to scream in shock as nearly 0.8g of acceleration pins them in their seats. Unlike a gasoline car, the acceleration is fairly linear to well beyond the legal speed limit.

While the devilish underside of the Roadster Sport will encourage spirited driving, the cruise control will remember the previously set speed, allowing for lightning-quick overtaking. Release the accelerator, and the set cruise-control re-engages.

At freeway speed, road and wind noise is noticeable, but less so than previous versions of the Tesla Roadster, and certainly less than similar gasoline-powered sports car.

Out of the town and off the freeway the 2011 Tesla Roadster Sport al2.5 is at its most exciting. Everything from rural roads to winding highways provide a chance to experience the marriage of sporting chassis and all-electric drivetrain.

The model we drove had ten point adjustable suspension, allowing the Tesla Sport to be set up for anything from race-days to daily driving.  Push the car too far, and only a little understeer politely lets you know before anything gets out of hand.

Keeping the 2011 Tesla Roadster Sport 2.5 from getting tail-happy is Tesla’s traction control system. Turned on and off via a button just beneath the parking brake, the system prevents wheel-spin and measures out the 295 ft-lbs of torque the motor develops without putting car and driver in a ditch.

While Tesla still uses its own proprietary charging connector on the car, the 2011 Tesla Roadster Sport 2.5 can charge at anything from 10A, 110V through to 70A at 240V.  Charging time at 110V isn’t going to be quick, but a 32A, 240V connection can charge the Roadster Sport from empty to full overnight.

For a fast charge time of 4 hours, the 70A, 240V charger offers a quicker way to refuel, but  we think very few owners will need more than the 245 mile range the car’s 56 kilowatt-hour  thermally-managed battery pack offers when full.

To encourage long-life, the 2011 Tesla Roadster Sport 2.5 offers four modes of battery charging; storage, standard, performance and range. The storage option is designed to keep the battery pack healthy while the car is not used, whilst the standard charge mode helps to preserve battery life by not utilizing the full 56 kilowatt-hours of storage

Performance mode helps to squeeze a little more power into the battery pack, whilst the range mode fills the battery pack to its theoretical maximum. Selecting range or performance modes warns you of its detrimental effect on battery life and also increases the charge time on the vehicle.

Similarly, the 2011 Tesla Roadster Sport 2.5 also offers a standard, range and performance mode for driving. As the names suggest, these adjust the amount of battery capacity used, thus changing the indicated ideal range of the car.  Switching between them can be accomplished via the centrally mounted touch-screen or by toggling the ignition key.

Choosing range mode allows the car to make use of its entire battery capacity and allows for the magic 245 mile range in ideal situations. However, it also limits the power to the wheels, increasing the 0-60 time from 3.7 seconds to nearer 6, but since this figure is more than adequate it doesn’t distract from the overall driving experience unless you are driving on a track.

As with any car, there are a few things we’d like to see redesigned. During the weekend, the traction control was accidentally disengaged while reaching for the parking brake, resulting in some unexpected but amusing wheel-spin.

The steering column does not adjust for rake or height. When combined with a drivers seat which only adjusts for length the steering wheel can obscure the dashboard for drivers over a certain height. 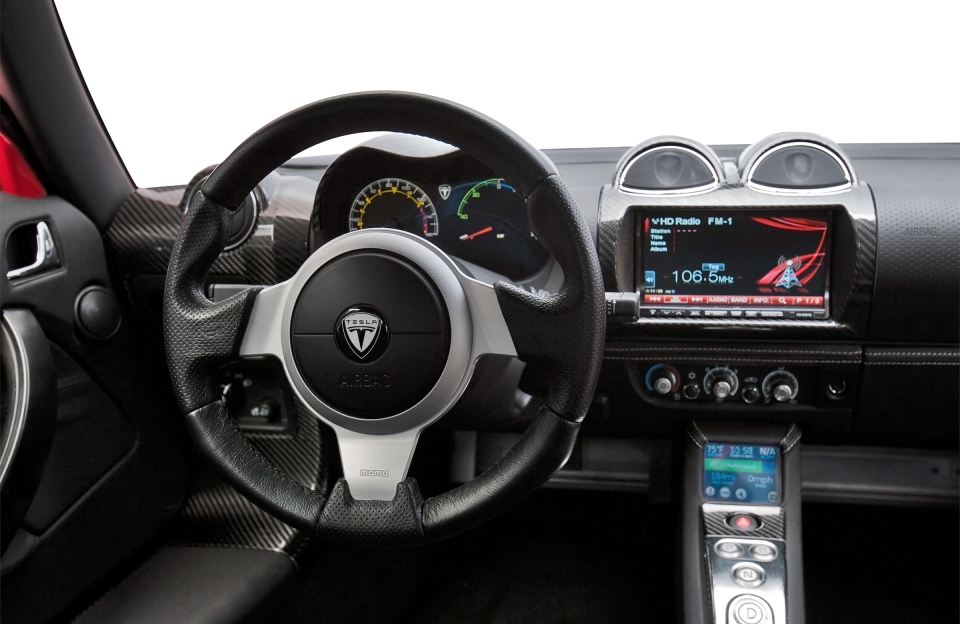 We also found the cruise control switches can be accidentally triggered, turning cruise off when using the indicator.

However, these are small issues which do not distract from the Tesla experience.

With revised looks, tweaked software and a much quieter interior the 2011 Tesla Roadster Sport 2.5 is certainly worthy of the Tesla badge. We loved the adjustable suspension, improved seats and increased battery management, ensuring both driver and car are at peak operating performance at all times.

Is it expensive? Yes. Is it a rich-person’s plaything? Perhaps. But the 2011 Tesla Roadster Sport 2.5 offers enough refinement that it can perform as well as a daily driver as it can a track-day car, and we can’t think of many cars in its class which are as easy to drive in congested city streets.

If you can afford the price-tag, the 2011 Tesla Roadster Sport 2.5 offers inexhaustible fun and relentless acceleration normally reserved for jet aircraft.

Do we want one?