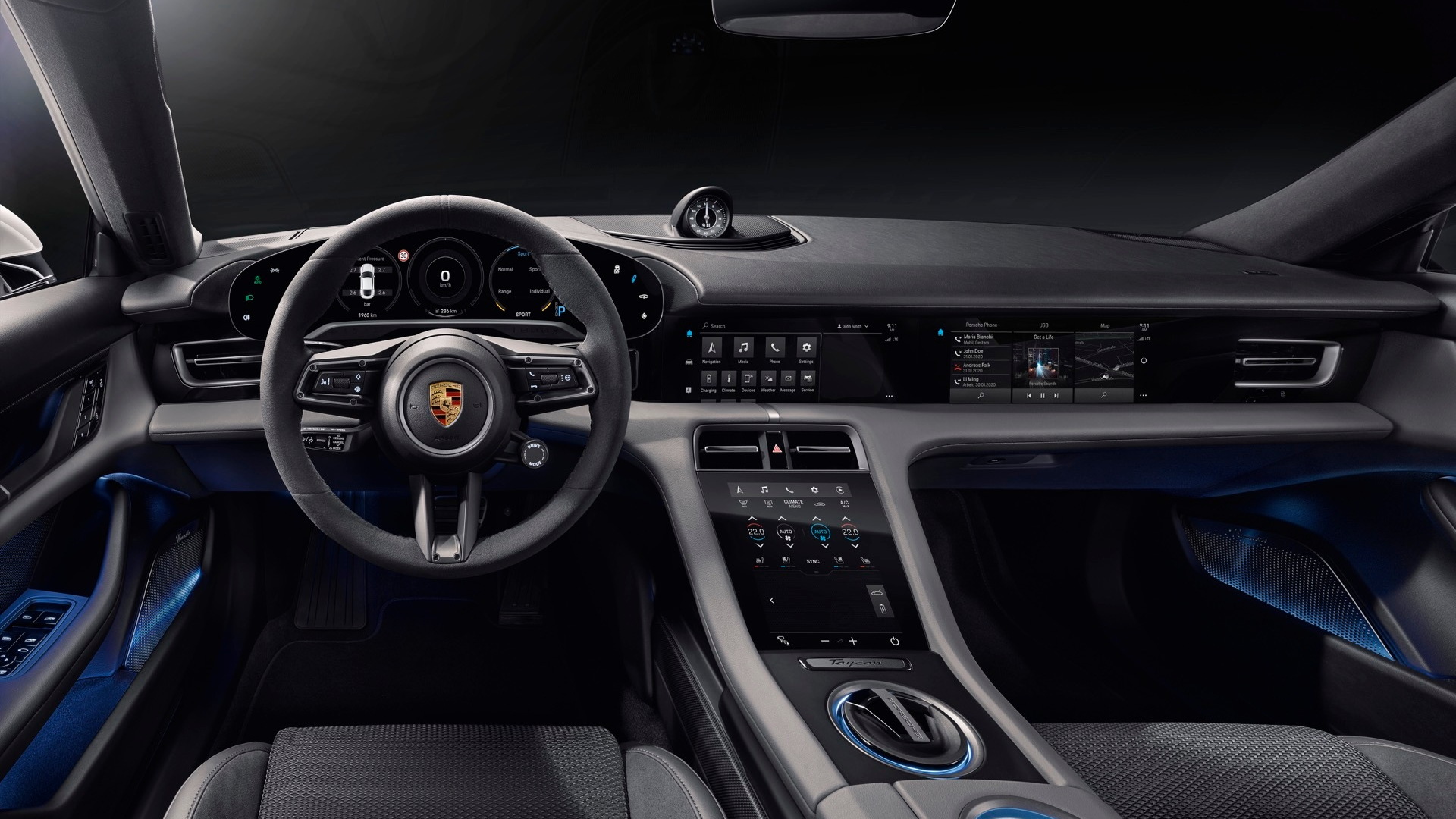 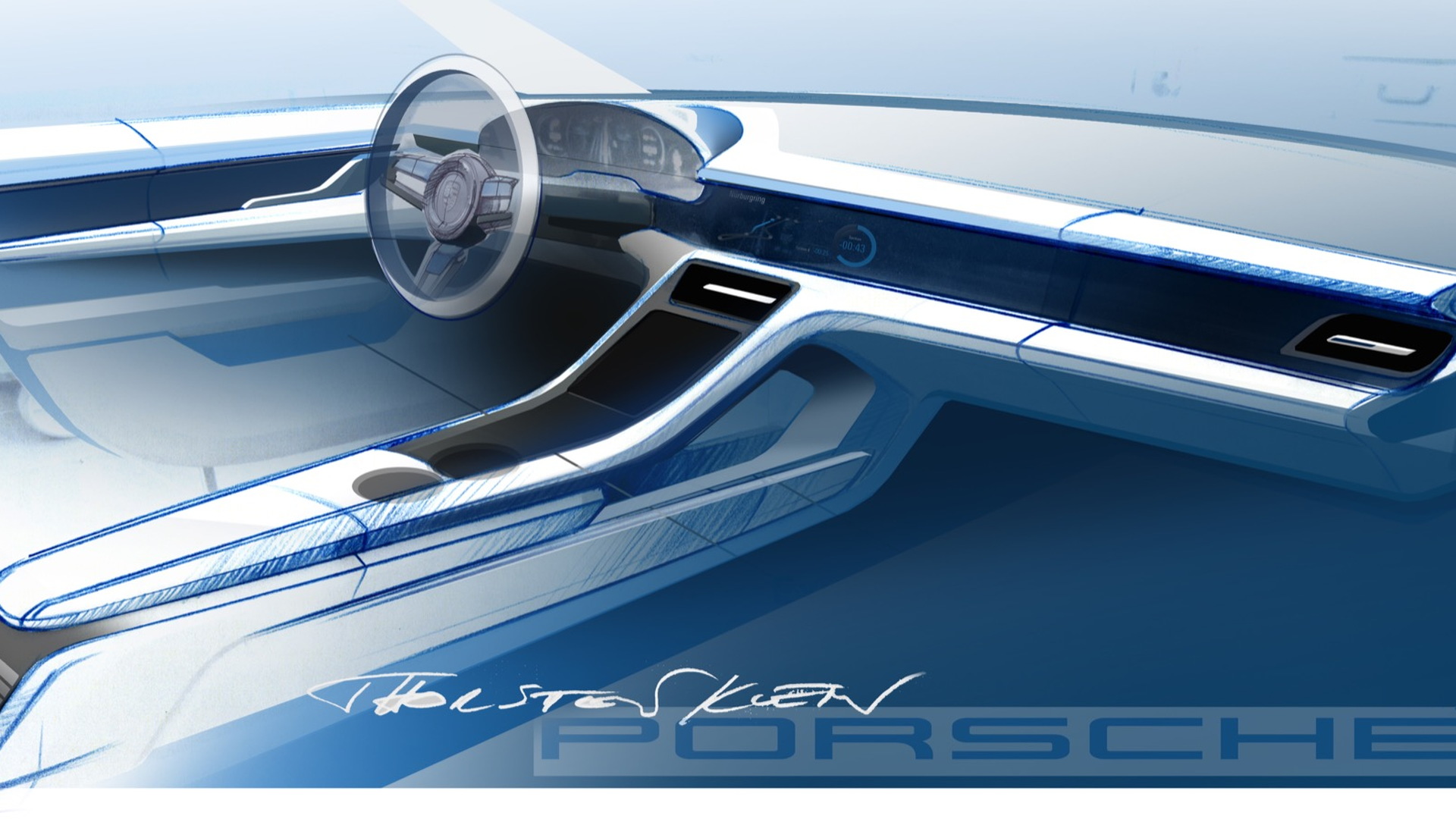 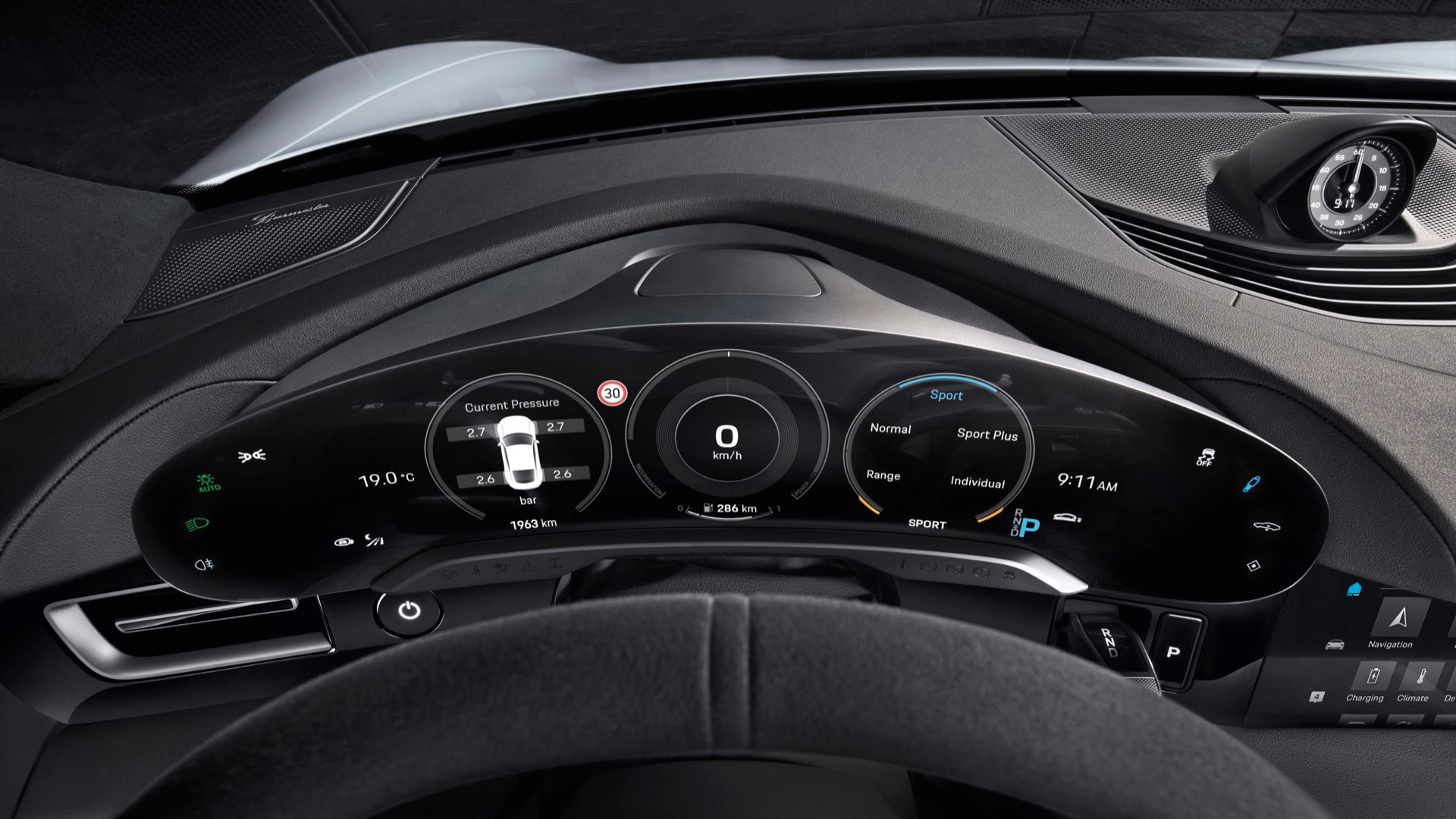 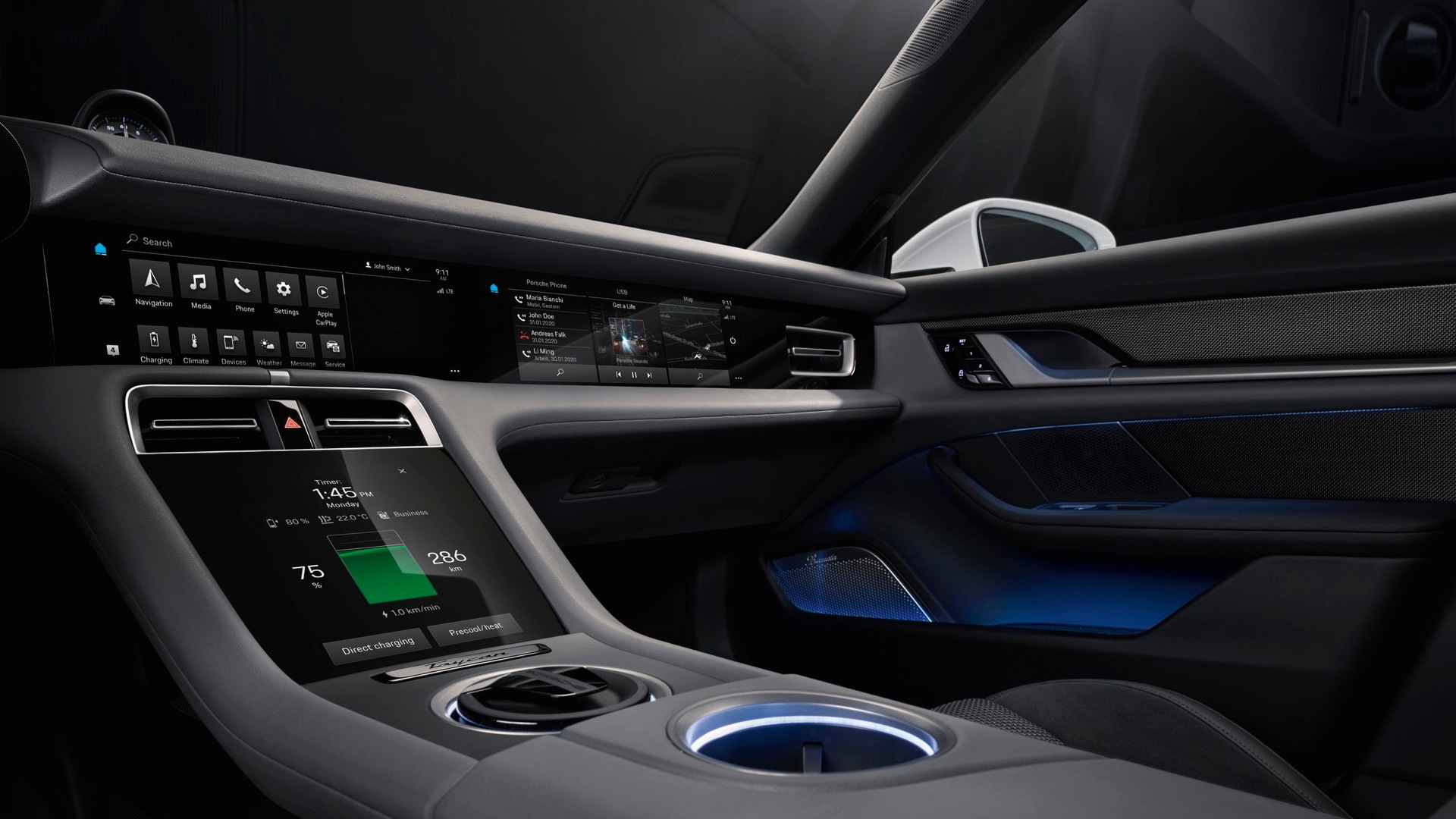 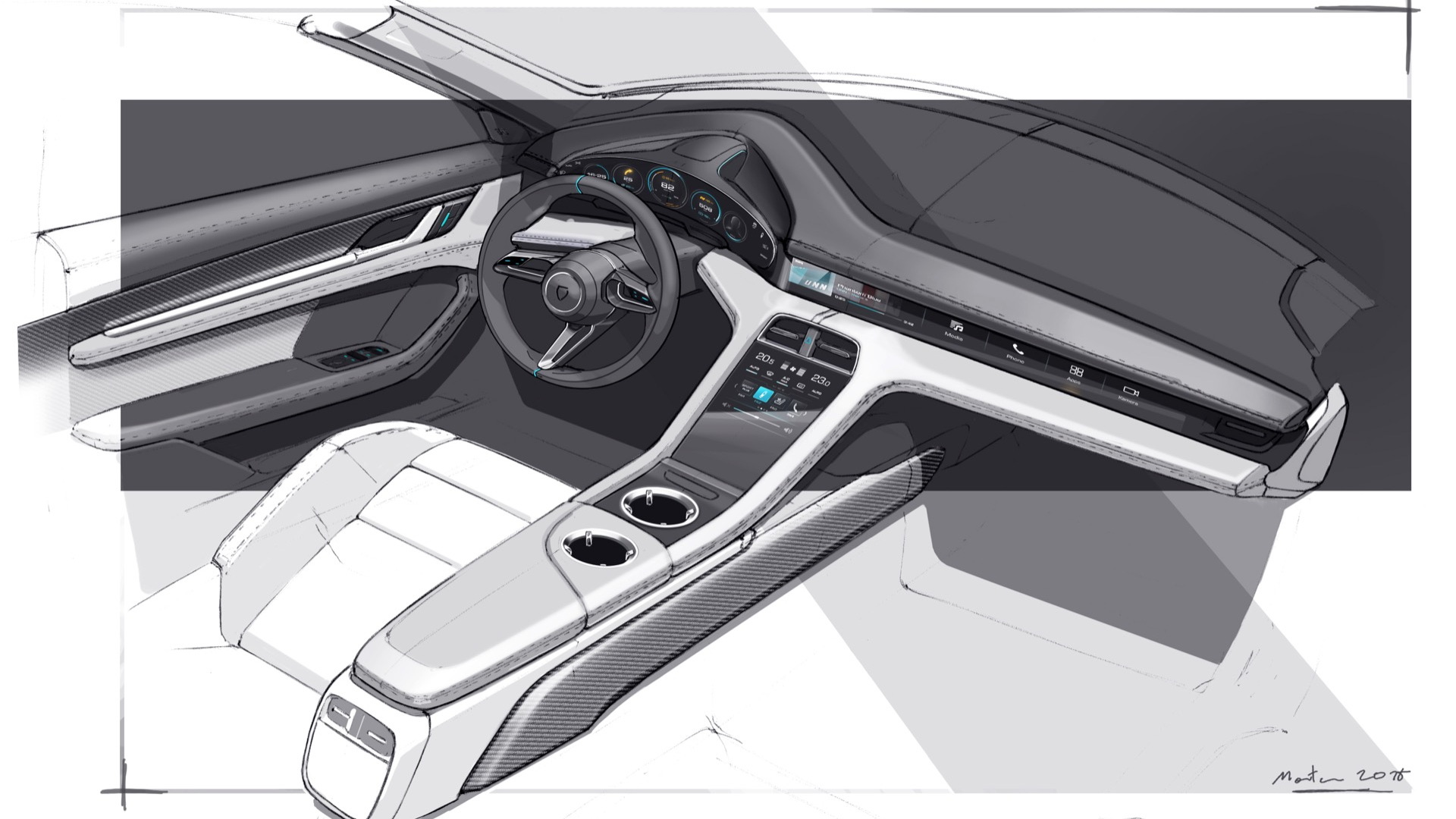 Porsche on Thursday revealed a set of images for us to see what’s inside the upcoming Taycan electric car. And while the Taycan’s interface and instrument panel look poised to make the 800-volt future leap we’re expecting, it’s also easy to see that this is also soundly grounded in the storied sports-car brand’s heritage.

From a design standpoint, the dashboard of the 2020 Porsche Taycan was sketched out with the original 1963 Porsche 911 sports car’s dash as inspiration—meaning "simple" and "horizontal" were governing concepts behind the dash itself.

It’s driver-focused at a glance, with a clean, minimalist look and the assurance that the curved instrument cluster is the highest point of the otherwise low-set dash. From overhead, the padded dash itself wraps forward at the driver’s controls, and the driving position itself is low and relaxed, with aggressively bolstered sport seats to handle the high G-forces of a performance car.

The simplicity is a good choice, because a lot of the remaining real estate is dedicated to a swarm of touchscreens. Between its modest frames there are up to five of them, and a lot of technology packed within.

A new 16.8-inch curved screen is rounded and directly in front of the driver, with a real glass lens and anti-glare polarizing filter, and the option of multiple gauge layouts for the driver. An insert on top of the gauge cluster hints at the future possibility of a head-up display.

One of the released photos clearly shows the Taycan’s five drive modes: Range, Normal, Sport, Sport Plus, and Individual, which together mostly echo what’s in Porsche’s other vehicles (with the same rotary steering-wheel toggle), with the addition of a Range mode.

The center-console touchscreen in one of the teaser photos shows a range readout, with 286 km (178 miles) remaining at 75 percent state of charge—which might indicate a full range of 237 miles, anecdotally.

Like the Tesla Model 3, the Taycan has climate-control vents that can be controlled digitally via touchscreen. Here it's called "Virtual Airflow Control," and you can also choose between Focused and Diffused modes for airflow.

The far right screen can be turned off when it’s not in use, and Porsche says that there’s enough shared processing power for the entire system for it to be able to display lag-free dynamic maps on all three screens at once.

The base interior look for the Taycan will be purposeful and more or less monochromatic, favoring darker tones, but Porsche will offer Black-Lime Beige, Blackberry, Atacama Beige, and Meranti Brown, plus colored inserts that will brighten it up, including matte black, dark silver or neodyme (champagne). Wood, matte-carbon, embossed aluminum, or fabric trim options will also spice up the look.

Two steering-wheel designs give you a choice of a basic Taycan design or a sport steering wheel that winks over to the Porsche 918 plug-in hybrid supercar. The shift-position selector switch, to the right of the steering wheel, is also inherited from the 918; it looks at first glance like it might be keyfob dangling out of the dash. There’s also an analog gauge at the center top of the dash—likely a nod that the Taycan will offer the Sport Chrono package that’s a mainstay in other Porsche models.

With this peek, Porsche is clearly straddling a middle ground between past and future, and what plays as a driver-focused sports car versus what works well as a luxury sport sedan. Will it be the right middle ground to conquer Tesla owners and Porsche’s coveted performance crowd? We can’t wait to see more.