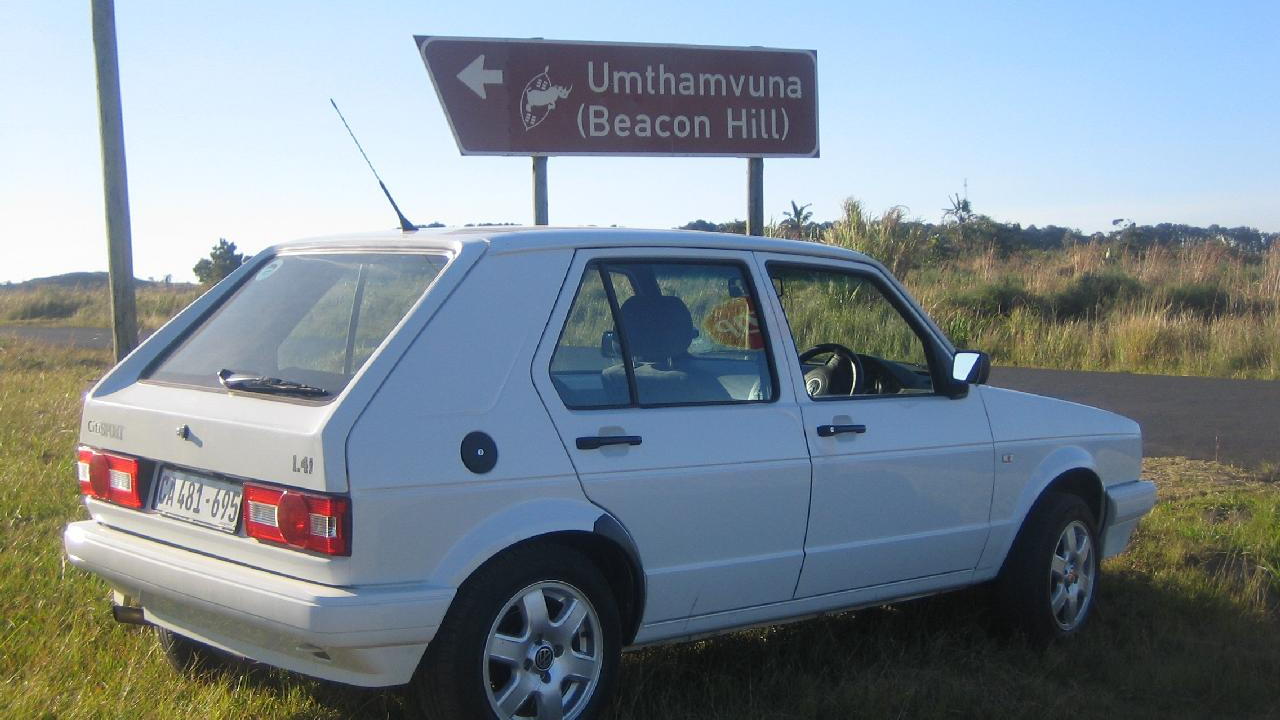 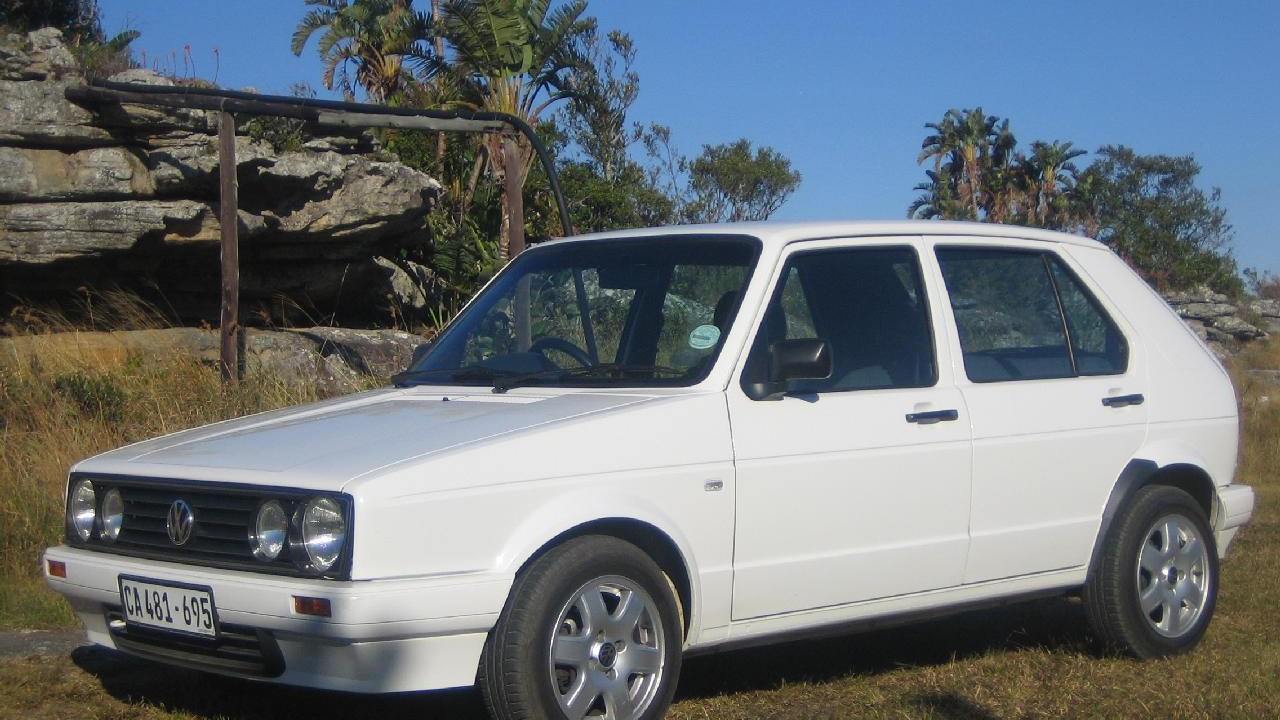 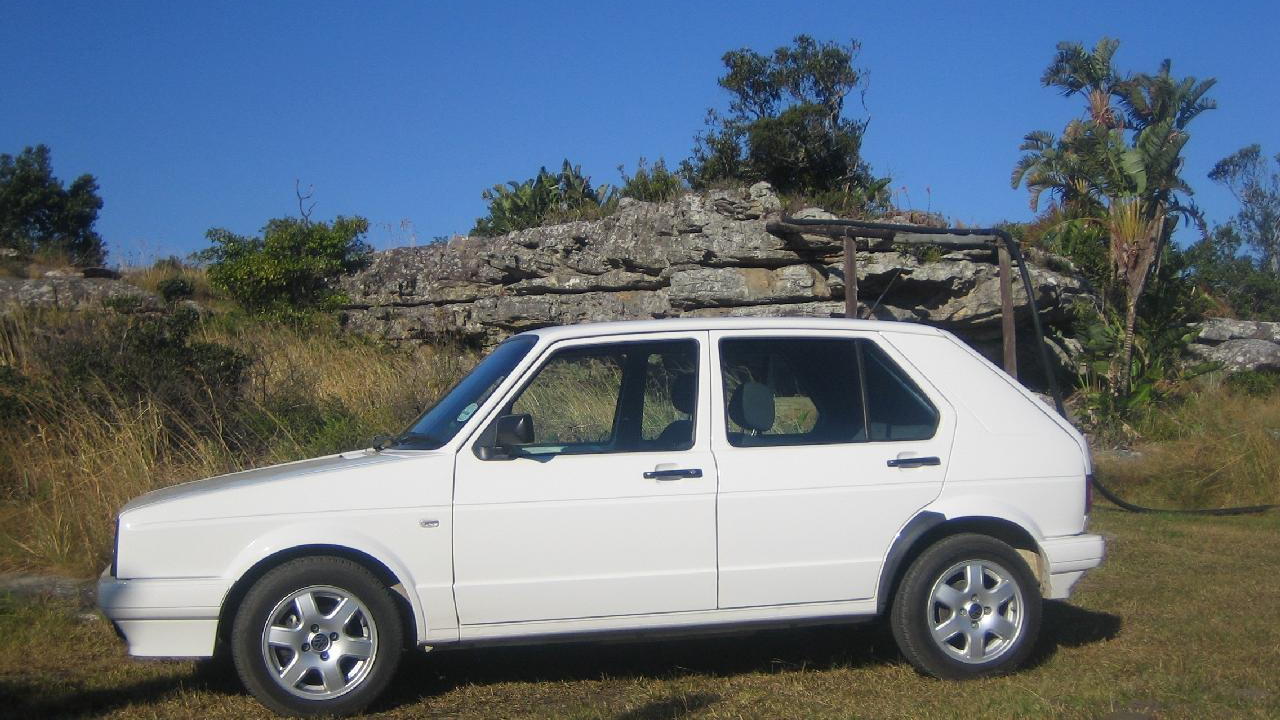 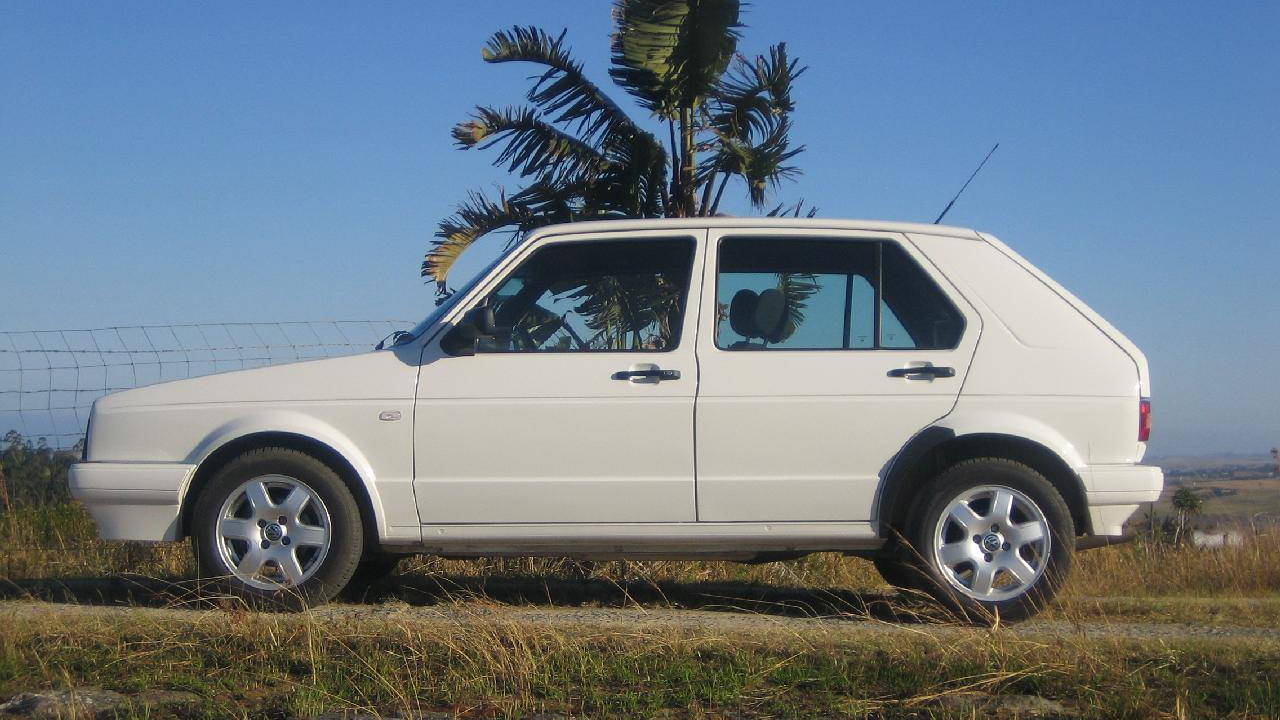 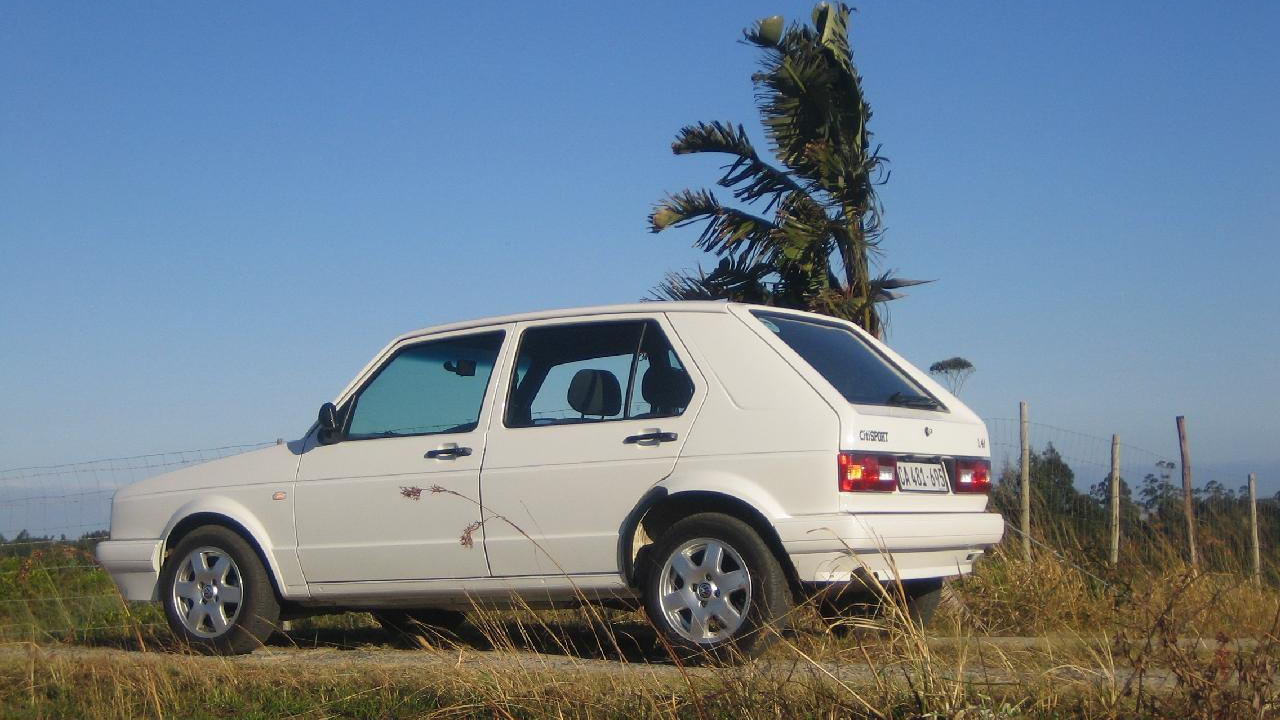 Most car sites run test drives of new cars. That is, cars that you can actually buy.

And now for something completely different: A test drive of an almost-brand-new, 35-year-old, 1975 Volkswagen Rabbit.

It's not called that; it's called the 2009 Volkswagen CitiGolf. Same car, though--just check the photos.

Here's how it happened: In 1984, Volkswagen stopped making the Rabbit in its ill-fated U.S. plant (closed in 1988), replacing it with the Mexican-built 1985 Golf.

It shipped the old tooling from Westmoreland, Pennsylvania, over to Volkswagen of South Africa--including the stamping machinery for the U.S.-only Rabbit pickup (the local word is ‘bakkie'), battered examples of which still haul goods all over the country.

The first-generation Golf/Rabbit lived on for another quarter of a century in South Africa, settling into old age as VW's least expensive South African model. It went out of production less than a year ago.

Back in the day, we owned two separate 1980 Volkswagen Rabbit hatchbacks. So we jumped at the chance to rent a 2009 Volkswagen CitiGolf for a day on our South Africa sojourn, especially after the deadly dullness of the two 2010 Toyota Corollas we also rented.

The very first VW Golf is a classic design, penned by Giorgetto Giugiaro's Italdesign studio as a five-door hatchback in the linear style of the day.

To our eyes, the Mark I Golf's clean, purposeful lines have aged particularly well. We think the car still looks modern 35 years after it hit the road.

Compare the VW CitiGolf to, say, any 1975 model from a U.S. or Japanese manufacturer-and decide which looks older and more old-fashioned today.

What the looks disguise, though, is how small that first Golf is by today's standards. The CitiGolf would now be considered a subcompact-it's the size of the current Volkswagen Polo, the model below the sixth-generation 2010 Volkswagen Golf.

The CitiGolf shows its age more from the driver's seat than the outside. Getting in, the doors are remarkably thin and upright. Behind the wheel, the windshield seems almost vertical, with the base remarkably close to the wheel.

The original Rabbit's large rectangular box of an instrument panel was replaced in 2004 by a 1990s design from the Skoda Fabia with a hood that arches over two large instruments (tachometer, speedometer) flanked by two small ones (temperature, gasoline level). It is plain, but functional and modern.

The interior surfaces are either body-color painted metal or black (for the carpets, lower upholstery, and headliner). But we were enormously charmed by the fabric inserts, which have a neat pattern of interlocking CitiGolf outlines-cheerful and clever, like the car itself.

The CitiGolf we drove was fitted with a fuel-injected 1.4-liter engine that develops 73 horsepower (54 kilowatts), running on unleaded gasoline.

One feature we remembered from our own Rabbits carried over unchanged: the notchy, rubbery, imprecise shift linkage controlling the five-speed manual gearbox.

As before, we found ourselves struggling away from stoplights in third gear, rather than the first we'd intended. But long-dormant skills from 25 years ago eventually surfaced, and by the end of our day, we were confidently feathering the clutch to move smartly away in first.

Flogging the CitiGolf down limited-access highways at 75 mph (120 km/h) was comfortable, with conversation possible in loud voices. A brief downhill spurt above 90 mph (150 km/h) produced enough vibrations from the front wheels that we backed down.

As for fuel efficiency, we covered 56 miles--after which the attendant (all gas in South Africa is pumped by gas-station staff) was able to put in only 0.58 gallons (2.2 liters) of fuel. That would be 96 miles per gallon, so we conclude he didn't try very hard. Our old manual Rabbit used to get about 30 mpg, which seems a likely rough guess.

The little retro-Rabbit handled well, though, maintaining the chuckability we remembered using to the fullest in the mid-1980s. Like the original, the CitiGolf understeers when cornered hard, and there's a fair degree of body roll.

We didn't push it to the limit, though. The first of our own two Rabbits remains the only car we've ever totaled. We didn't want to repeat that experience in a rental, driving on the wrong side, on rough roads in a foreign country.

The lack of power steering was probably the car's biggest anachronism. Moving the wide tires at rest took real muscle. Made us realize how spoiled we are these days--and how physical driving a car used to be.

Lastly, the CitiGolf forced us to recall a Volkswagen peculiarity dating back to its air-cooled models of the 1950s and 1960s: the bottom-hinged accelerator pedal. It proved just a little harder to accommodate than we expected.

Did our Rabbits have that? We can't recall, but we don't think so.

Inside, the CitiGolf feels bigger than it is, perhaps because of the upright windows. The seats are thin, and it will carry four six-foot adults capably, if not lavishly.

The front seats are comfortable, with a European-style rotary recliner knob. The rear seatback folds down, and the folded rear seat can then be flopped forward to provide the large load bay we remembered.

The assembly quality seemed adequate, though not up to par with our other rental cars, both 2010 Toyota Corolla sedans.

Compared to modern 2010 cars, the CitiGolf's biggest drawback by far is its lack of refinement. Given its 30-year-old tooling, we weren't too surprised at its ever-present buzzes, rattles, and creaks.

But the sport wheels and wide 175-65 R 14 Continental tires on our 1.4i Sport model gave it a particularly noisy and rough ride on serrated South African secondary roads--which means just about any road besides main streets and freeways.

It wasn't a deal-breaker, but it was definitely far louder than a modern car. We noted that various CitiGolf models are fitted with 13-inch, 14-inch, and 15-inch wheels. The 14s looked right to us, but we'd go for something a little narrower.

The good part, though, was the direct feedback in the steering and handling that today's well-insulated cars (with extensive noise, vibration, and harshness suppression) just don't provide. We could hear and feel the mechanical parts working, and that was fun.

We were also surprised at the enormous output of the standard ventilation system. With the vents open, so much air rushed through that we imagined open pipes from below the windshield. We suspect it's due to high air pressure at the base of the steep windshield.

Modern cars are almost immeasurably safer than those of 35 years ago, so it was a relief to see that our CitiGolf did have one airbag--the smaller European style-in the steering-wheel hub. The door pillars looked far too small to hold side airbags even if they were fitted.

It also had three-point seat belts for all four occupants. And that's about as far as the safety gear went: no electronic traction control, probably no side beams inside the thin doors, and no apparent anti-lock braking system.

Though all three rear-view mirrors are smaller than those on today's cars, visibility is superb. The windscreen pillars in particular are thinner than any new car's, and the upright glass and visible front corners made placing the car a breeze.

Like its Beetle ancestors, VW Rabbits of 1975 were simple cars with relatively few frills--and that value has carried over to the CitiGolf.

Aside from netting pockets on the front doors, the sole storage space outside the glove compartment is a floor tray. Sited ahead of the shift lever, if offers two open bins and a pair of small cup holders. It looks distinctly like an afterthought, or a $14.95 aftermarket item.

The CitiGolf had no air conditioning, no seat-belt buzzer (just a small light on the gauge cluster), no ignition key buzzer, and no ignition interlock requiring the clutch or brake to be pressed to start the engine.

The door mirrors did have inside adjusters--the non-electric manual kind--and the CitiGolf was fitted with a rear wiper-washer which, if memory serves, our models of 30 years ago did not.

The row of four plastic blanking plates around the lone switch on the central dashboard--for the rear-window defroster--demonstrated the car's bare-bones nature. The manual window winders were slow, requiring seven full circles to raise or lower the driver's window.

Inspecting the key fob, though, we were surprised to note that our CitiGolf was fitted with power door locks:. The slowest, noisiest, most asthmatic power locks we've ever experienced.

Unlocking the driver's door produced grinding and groans from the other three doors as--eventually--their locks slowly and painfully levered themselves open. Like every South African model, it also had an anti-theft system, which we managed to set off by accident.

Beyond that, our CitiGolf's most modern feature was the VW-branded radio/CD player, which proudly noted on its face that it could play MP3 CDs.

We loved our time with the 2009 Volkswagen CitiGolf. It's the perfect size, it has direct steering and handling, and like all fun small cars, it performs best when driven reasonably hard.

Would we buy one today? Well ... probably not in the U.S. We've gotten to like things like noise insulation, the odd amenity, and more than a single airbag.

But if we lived in South Africa, we might well look for a very lightly used model, and drive it with great pleasure. Traffic there is slower, and outside the cities, there's a lot less of it.

If only Volkswagen could keep the bodyshell and just update it to modern standards .... [sigh]