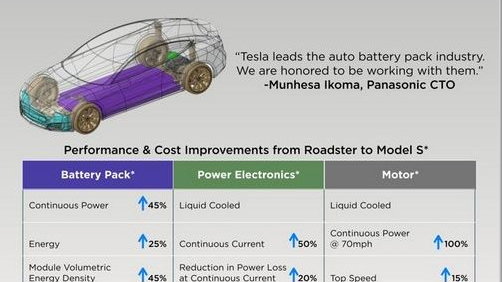 Tesla has previously hinted that its electric powertrain technology could be applied to a number of vehicle platforms and that the company would eventually expand its lineup beyond the current Roadster and upcoming Model S sedan.

In fact, at Tesla’s announcement of interest in acquiring a $465 million DOE loan last year, company execs revealed that the Model S platform could be used to spawn other vehicles including a minivan, a crossover and a utility van.

Now, as revealed in official slides presented to the Road Show, a platform to promote one’s company to Wall Street investors, we have details, including several sketches, of some of Tesla’s future models. Slide number 19 in particular shows what appear to be a cabriolet, a commercial van and a crossover based on the Model S.

All vehicles will be based on a common flat vehicle structure with the battery pack mounted in the floor. As Tesla's technology and product volume grows, the company is projecting a reduction in the cost to produce the batteries that power its cars, with the newer Roadster Sport already demonstrating a 31 percent savings over the original Roadster, and the Model S planned to save 56 percent in terms of dollars per kilowatt-hour.

Other tidbits revealed today include plans for new liquid-cooled powertrain technology, which if all goes to plans could be licensed to the major automaker for their respective future electric vehicles. Already signed up is Daimler and Toyota, both of which have a stake in Tesla, confirming industry confidence in the Californian start-up.

Follow the jump for to see the full presentation.