Rumors are flying that Nissan is preparing a subcompact electric vehicle to compete directly with cars like the Mitsubishi i-MiEV, and it may even be made in China.

The rumors are unconfirmed: word of mouth from inside a partner company of Nissan. But given the number of pre-launch reservations for the 2011 Nissan Leaf EV--combined with Nissan's long history of EV development--a new, smaller EV could be just what Nissan needs to become the market leader.

Nissan have been making electric cars for many years. Their first EV was produced between 1947 and 1950 and called the Tama; it was developed as a direct reaction to post-World War II oil shortages.  Since then, Nissan have regularly churned out many prototypes and occasionally, as with the 1998-2002 Nissan Altra EV, a short-run production model. During the 2008 auto show season, Nissan proudly displayed the Nissan Denki electric concept, based on the 2008 Nissan Cube.

During 2009 we saw an engineering test mule named EV-02 and based on the 2009 Nissan Cube getting out and about all over the world. With its lithium-ion battery pack and electric motor, it served as an early test-mule for the 2011 Nissan Leaf.

But did the early test mules impress Nissan's engineers so much that we might see a 2011 Nissan Cube EV?

Despite it's angular looks and wacky asymmetrical design, the 2010 Cube is essentially a five-door hatchback of similar size to the 2011 Leaf. It's unlikely Nissan will use the Cube as its next EV. However, there are two other distinct possibilities. 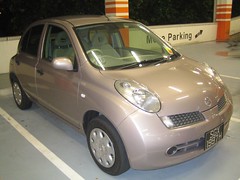 First is the recently face lifted 2010 Nissan Micra, or Nissan March as it is known in Japan. It is a smaller supermini five-seat hatchback.

While it's not for sale in the U.S., the Micra is sold in Europe and Japan, where it has a cult following. The U.K. domestic models of the Micra are also made at the Sunderland Nissan factory, which was recently chosen as European manufacturing plant for the 2011 Nissan Leaf.

But the most likely candidate for the new production Nissan EV has to be Nissan Mixim EV, displayed as a concept at the 2010 Detroit Auto Show.

The Mixim shares the wheelbase of the 2010 Nissan Cube, but is over 11 inches shorter. The Mixim sports three seats with a fourth available in the cargo area. Other features, such as forward hinged gull-wing doors are of course, unlikely to go beyond the concept. But an all-wheel drive dual-motor setup could lead to nippy acceleration and superior handling in town.

A small size EV is more than likely to be Nissan's next step, claiming a market currently dominated by over-expensive or under-performing superminis or microcars. Watch this space.