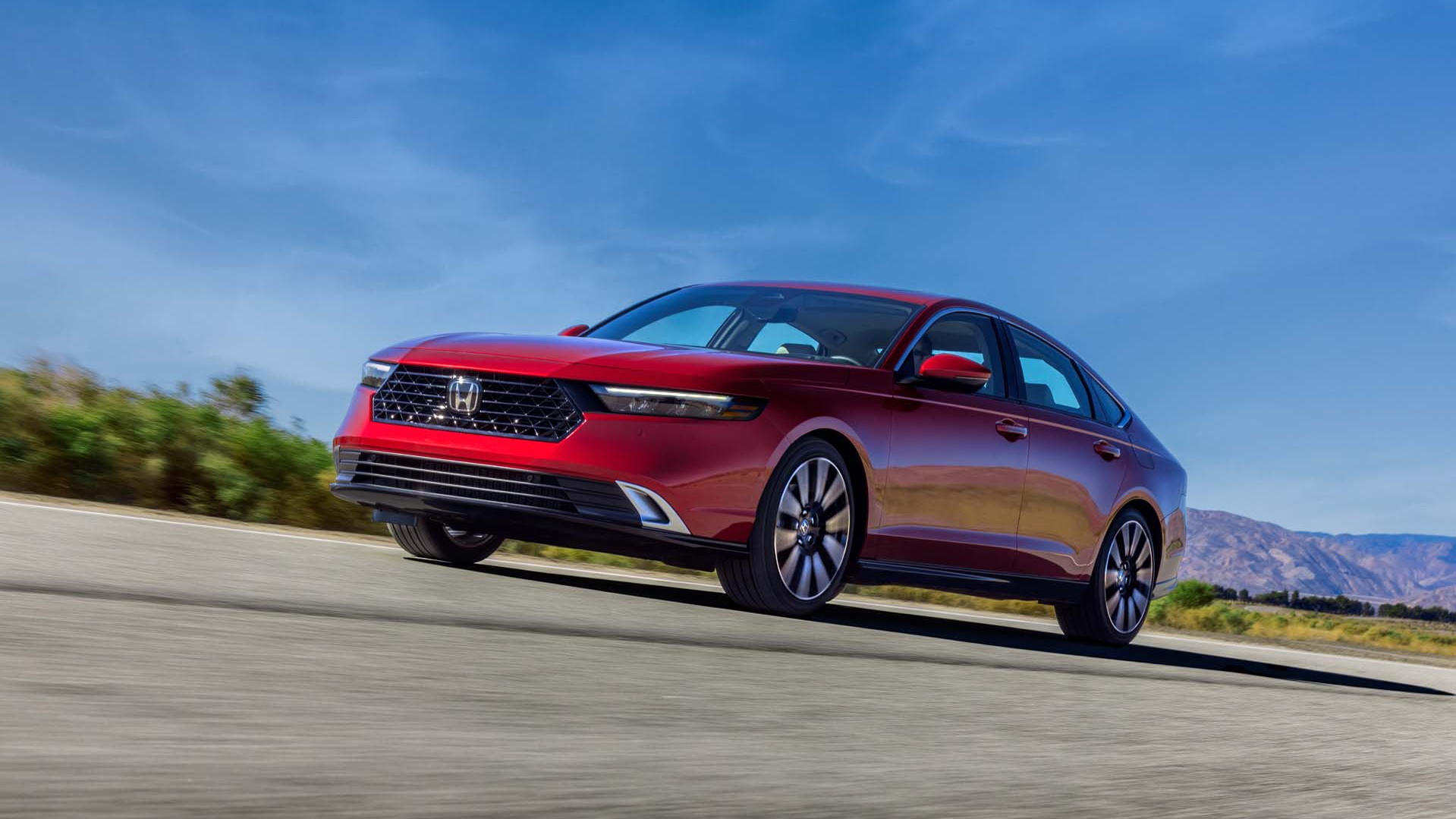 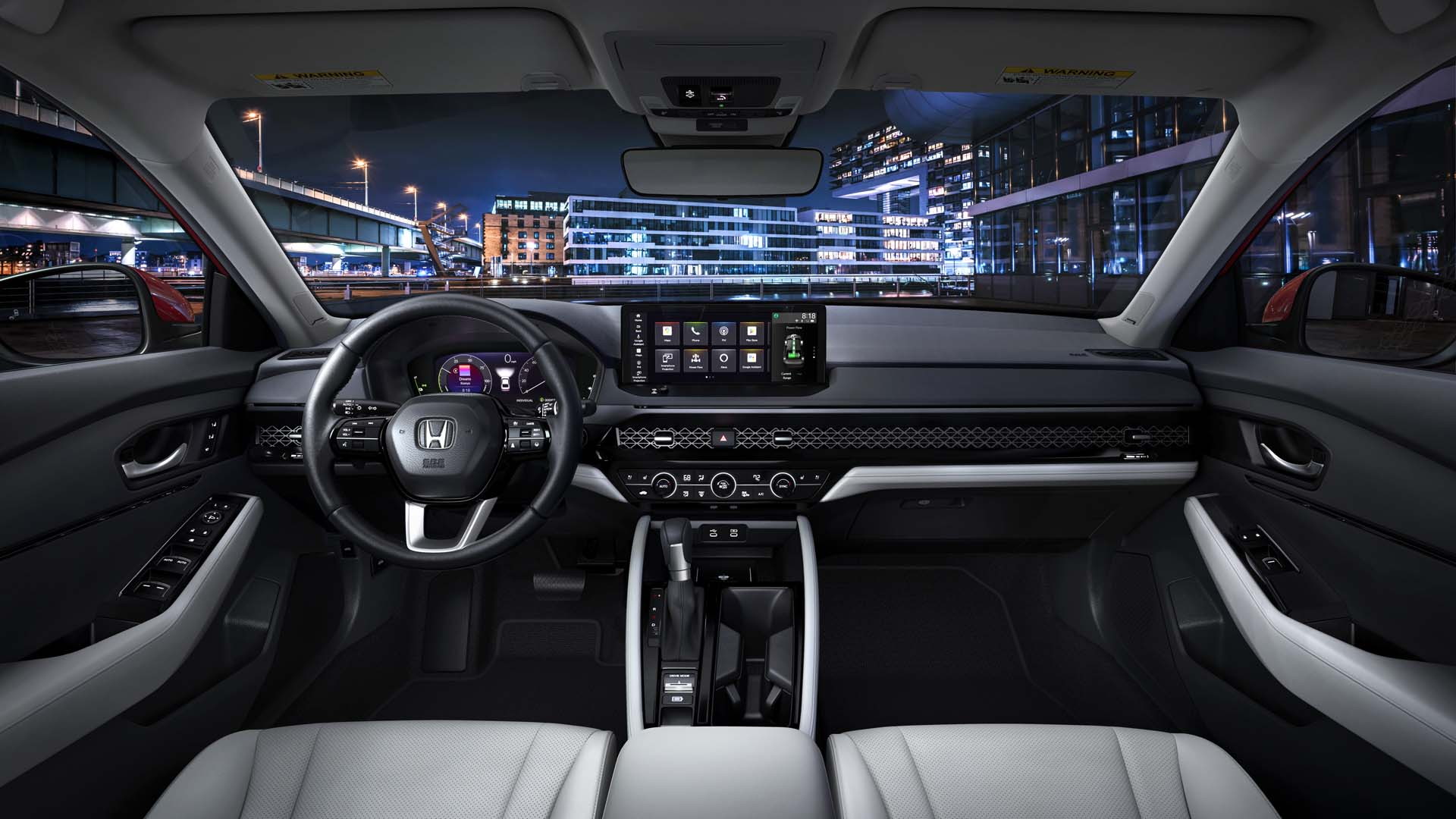 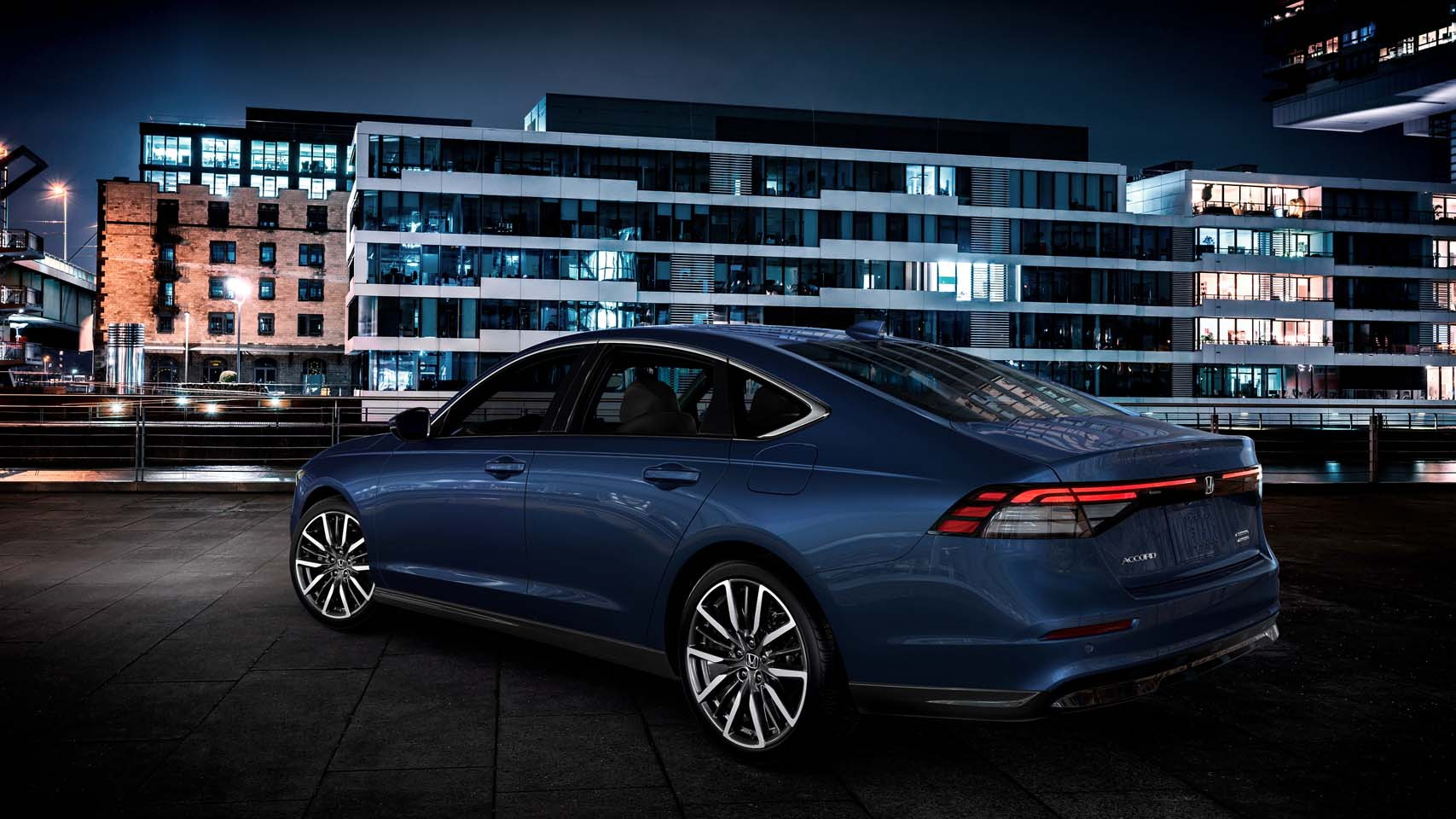 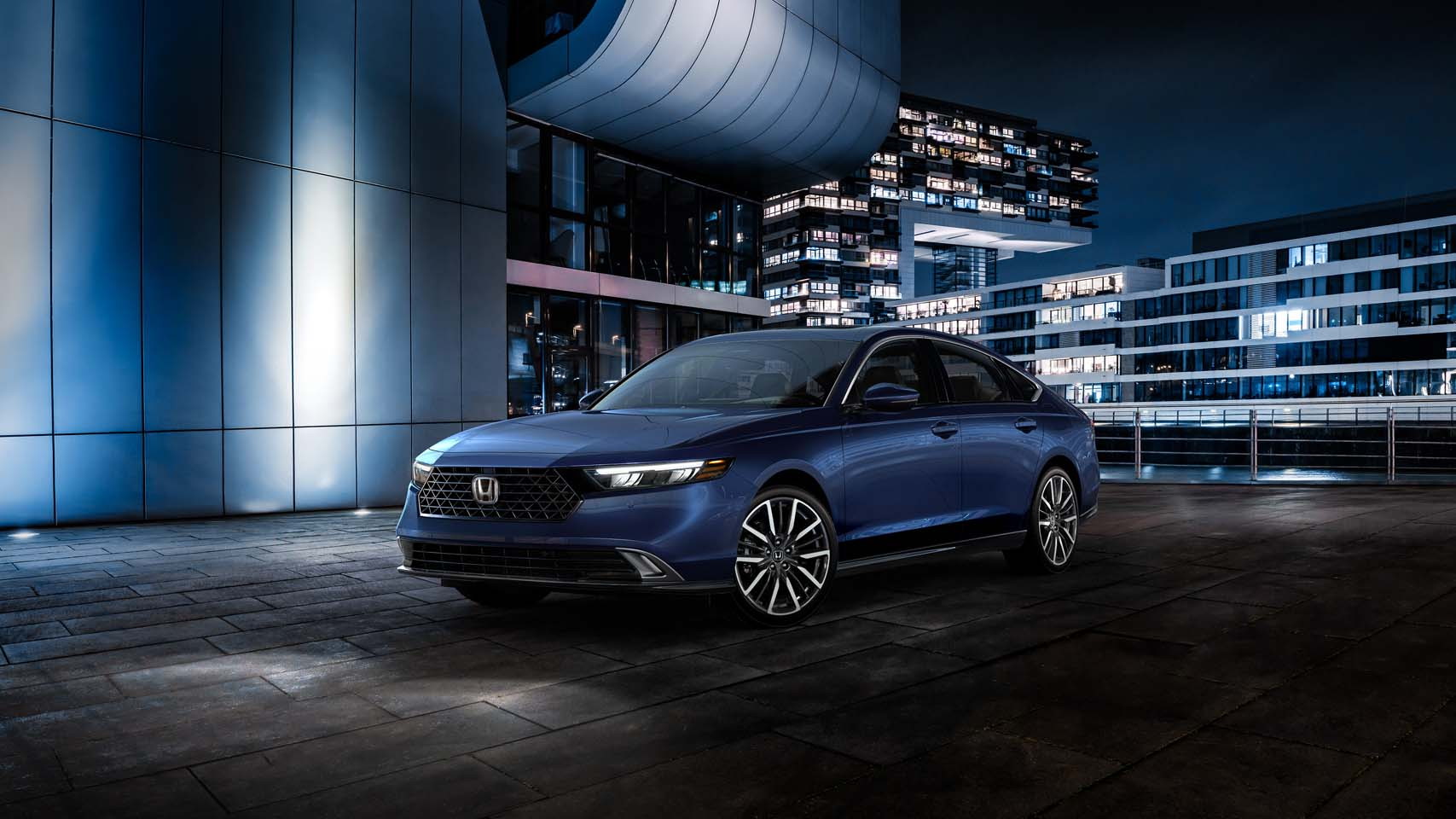 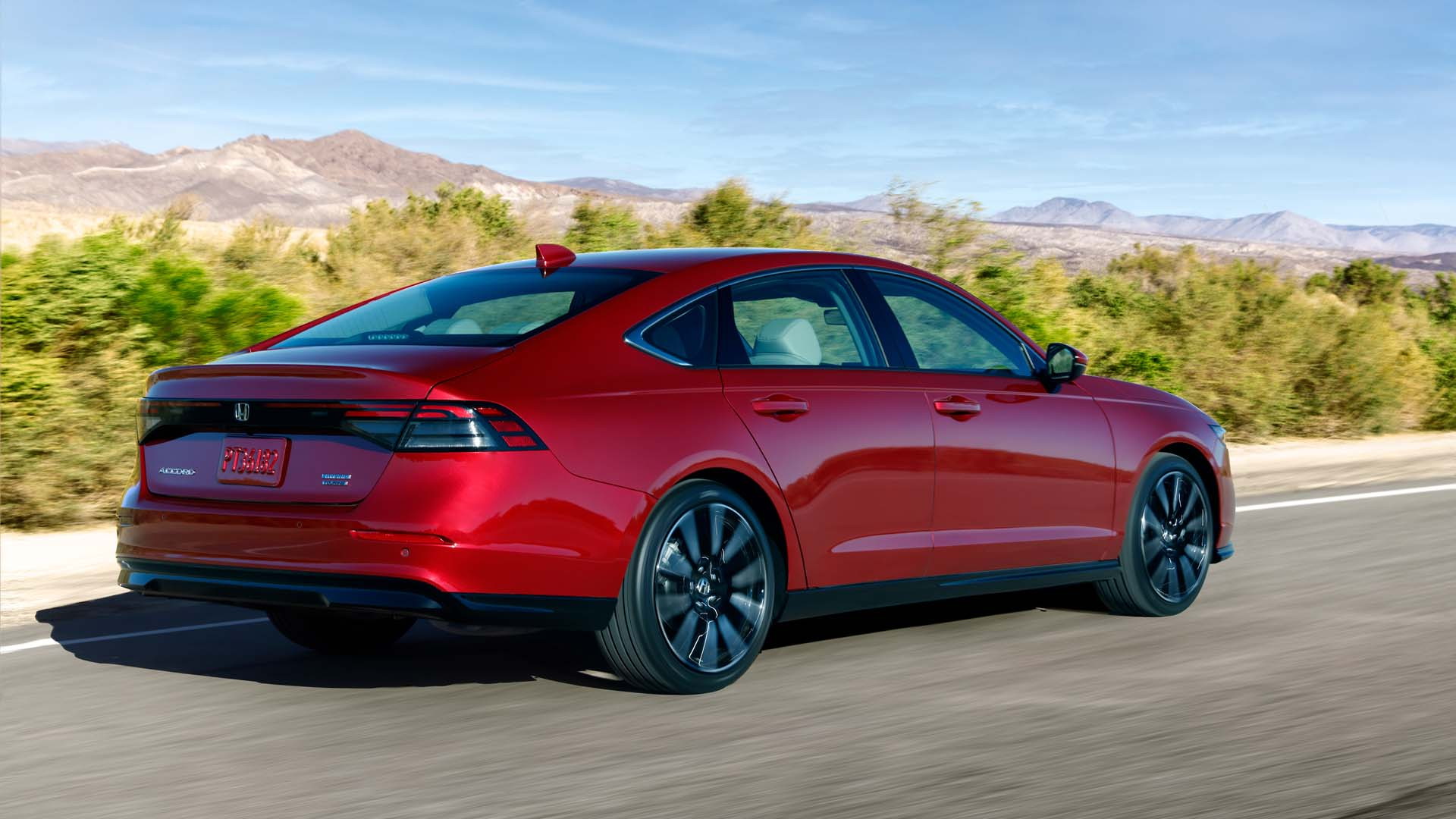 With the upcoming 11th-generation version of the Honda Accord first shown this morning, Honda suggests that the sportier-driving version of the Accord and the high-mpg hybrid version of this bestselling sedan are now one and the same.

Honda appears to be dropping the top-performance 2.0-liter turbo-4 offered in the outgoing Accord, and it’s putting what it calls a more responsive hybrid system into its Accord for “a sporty, exhilarating driving experience.” Further, it’s looking for Accord Hybrid versions to make up about half of U.S. sales of the nameplate.

To get there, Honda has broadened the availability of the hybrid. It will be offered in four of the Accord’s six trim levels: Sport, EX-L, Sport-L, and Touring, with only the LX and EX for the Accord’s base 1.5-liter turbo-4.

The Accord, like the latest CR-V Hybrid, gets a more powerful fourth-generation version of Honda’s two-mode hybrid system, here with a 2.0-liter direct-injection inline-4, a larger propulsion motor, and a boost to 204 hp and 247 lb-ft. That’s part of a reengineered hybrid-system layout, with the two motors no longer on the same axis.

If it’s anything like the system in the CR-V, drivability will be improved, with the instantaneous electric-motor torque available over a wider speed range than before and the gasoline engine much smoother when it does rev up. The new CR-V Hybrid also added a stepped behavior when the gasoline engine plays generator, plus speaker engine-sound supplementation, although neither are mentioned in Honda’s announcement for the Accord.

The 2023 Accord is 195.7 inches long—more than three inches longer than its predecessor—but it rides on the exact same 111.4-inch wheelbase and has the same 57.1-inch overall height. The appearance on the outside is clean and sleek, without a lot of creasing or cladding.

Look at the latest Civic, or the brand-new 2023 Honda CR-V, and you’ll get a good preview of where the Accord’s interior is headed—a cleaner look dressed a horizontal-mesh beltline across the dash plus more upscale materials throughout. Honda says that, at 16.7 cubic feet, the new Accord has the most cargo space in its class; rear seatbacks also fold to expand the space.

Expect the Accord to improve yet again in refinement and handling. All Accord models get a retuned four-wheel independent suspension plus front damper mount bearings and ball joints to help with steering smoothness.

The Accord Hybrid now also includes a 12.3-inch touchscreen infotainment system with wireless Apple CarPlay and Android Auto compatibility, plus a physical volume knob. A 10.2-inch driver information display is also included. The top Accord Hybrid Touring version has Honda’s first integration of Google built-in, bringing a voice assistant and support for Google Maps and Google Play. And it’s the first Accord to offer over-the-air software updates.

The safety feature set for the Accord includes several more active-safety items, including a low-speed braking control feature and Traffic Jam Assist. Knee bags and rear passenger side-impact airbags are included, and the front airbags are a new design aiming to reduce brain and neck injuries.

The company says that the Accord gets new front body-stabilizing seats throughout the lineup, while thinner front pillars will help with outward visibility. Touring versions come with a head-up display, 12-speaker Bose audio, and 15-watt smartphone charging.

Honda hasn’t yet said what the Accord Hybrid will earn in efficiency. But in the transition to the reconfigured hybrid system, the CR-V Hybrid manages about the same as the outgoing version—at 40 mpg with front-wheel drive or 37 mpg combined with all-wheel drive. The outgoing Accord Hybrid, with its lighter weight and more aerodynamic form, achieves 47 mpg combined and a particularly impressive 602-mile range.

Honda made pricing of the CR-V Hybrid one of the keys to making hybrid mainstream in the refreshed version of that model. We’ll soon see how well the 2023 Accord can keep up—and whether it wins even more than half the customers.