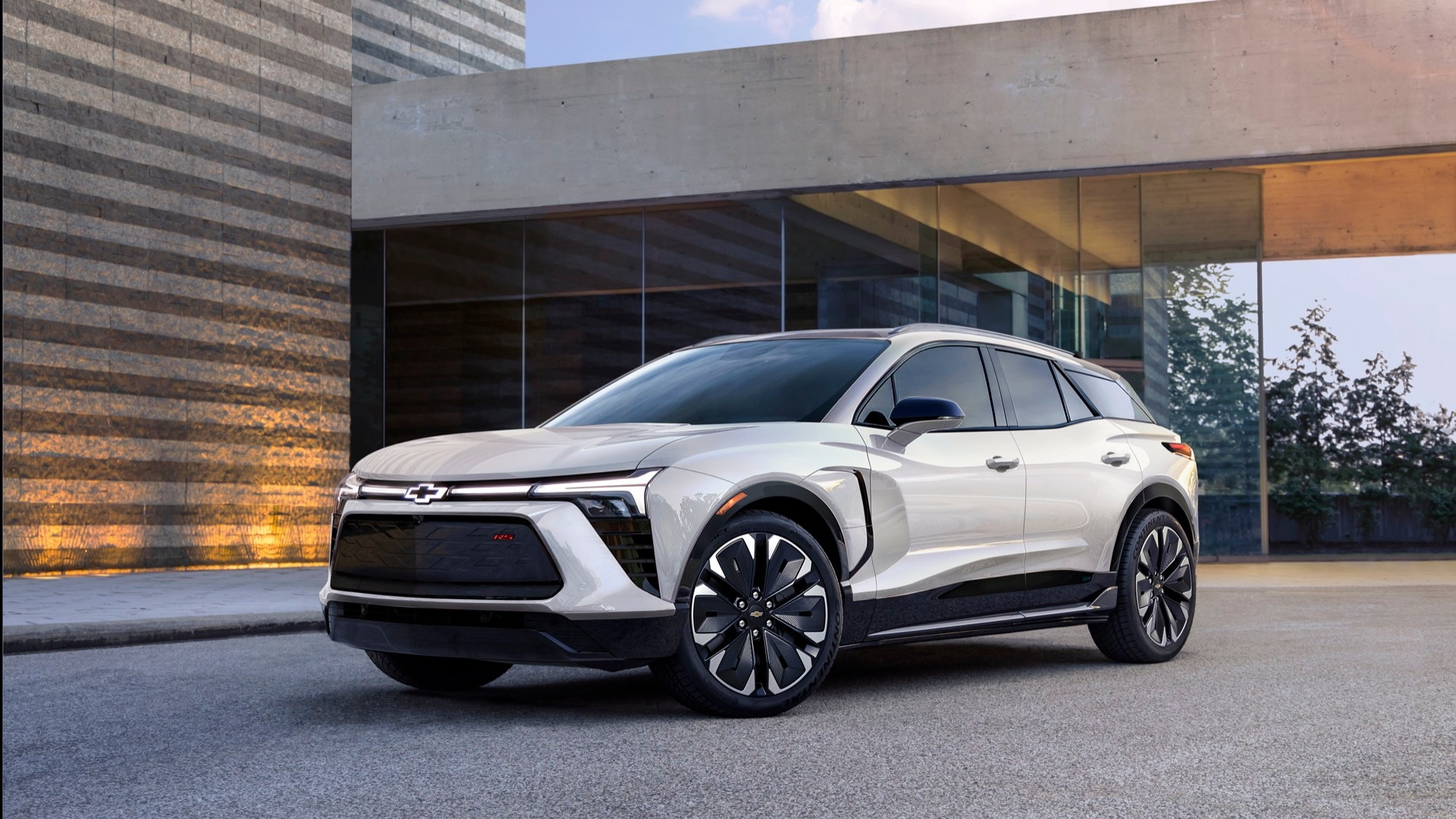 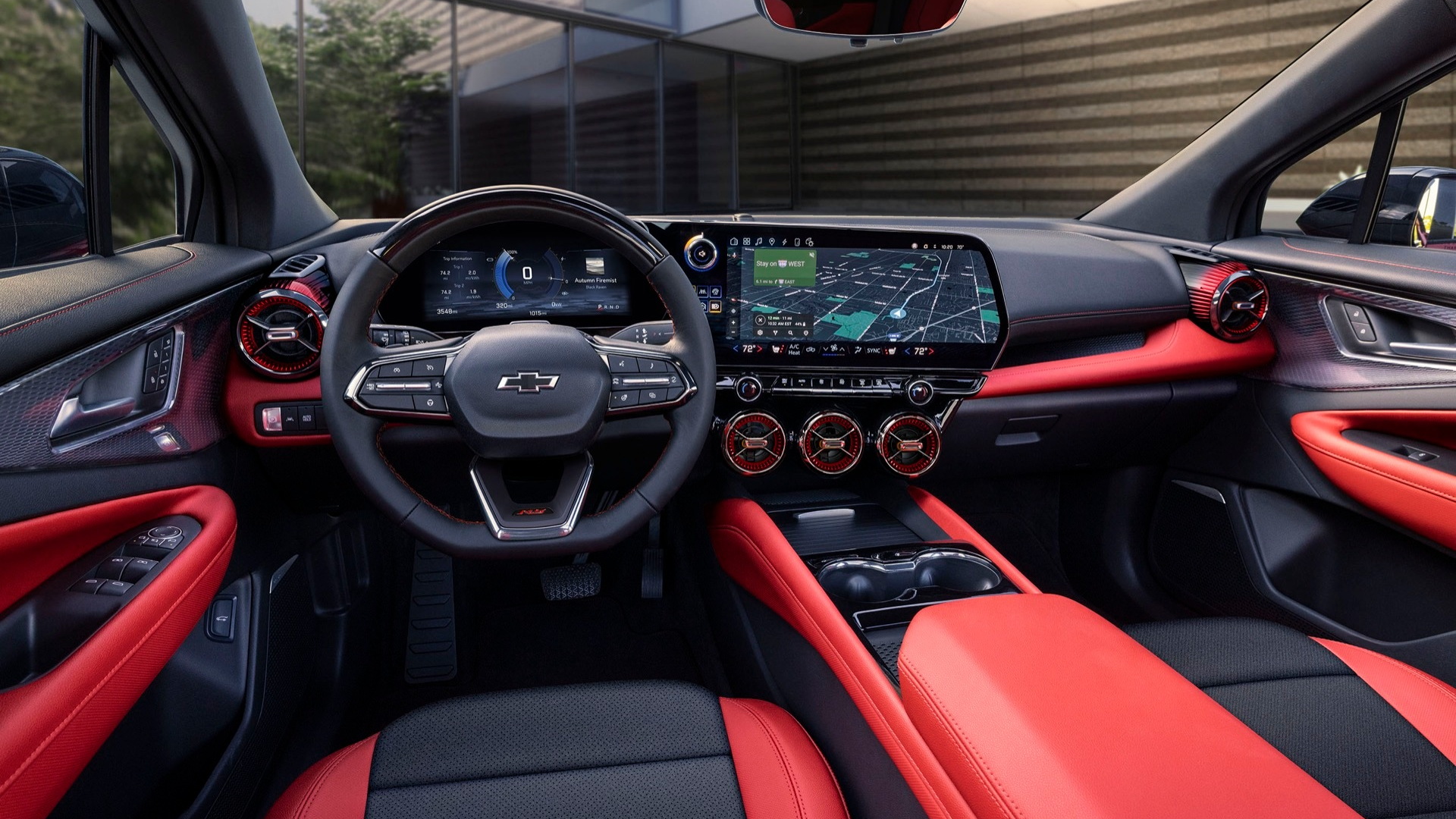 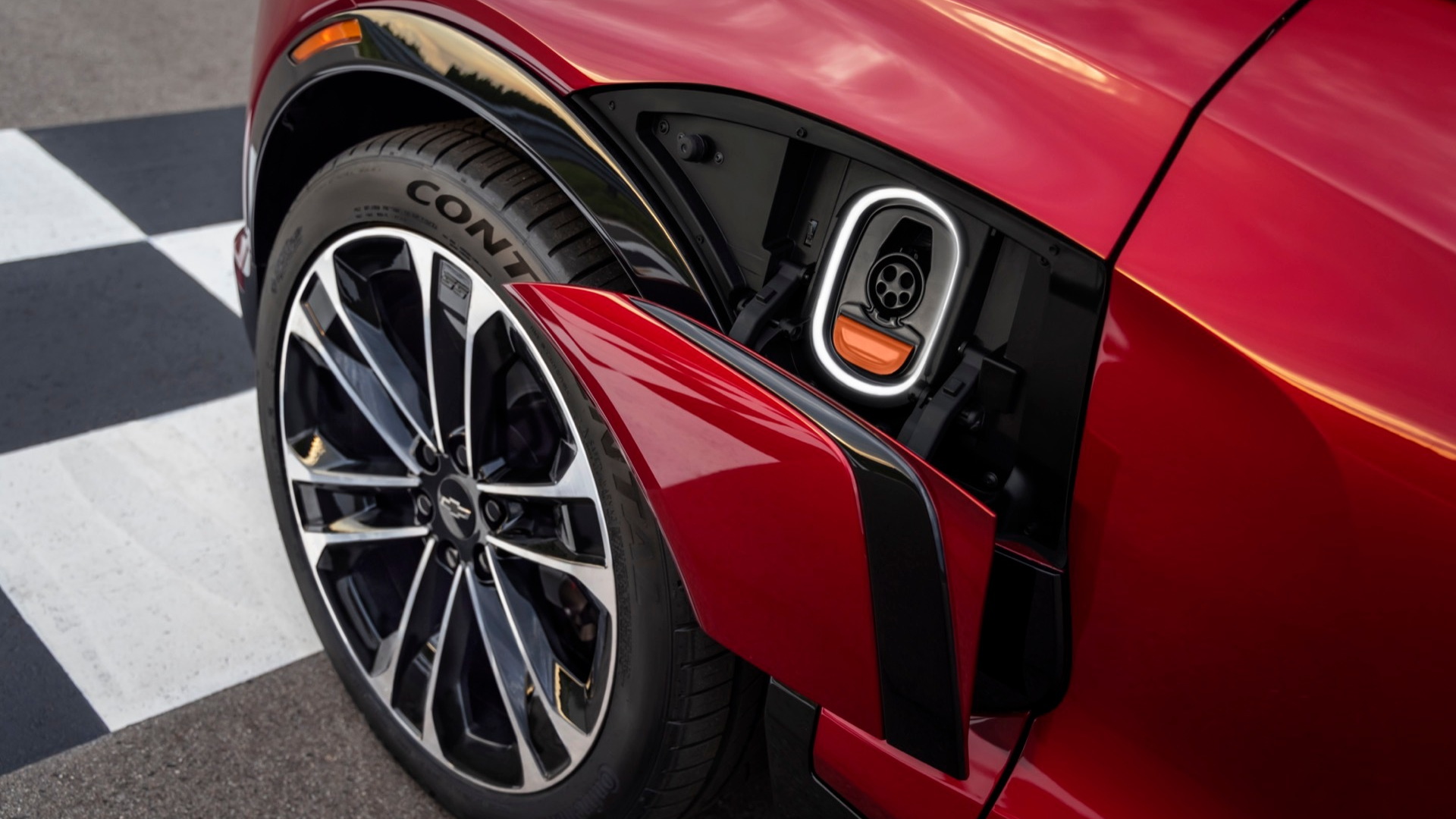 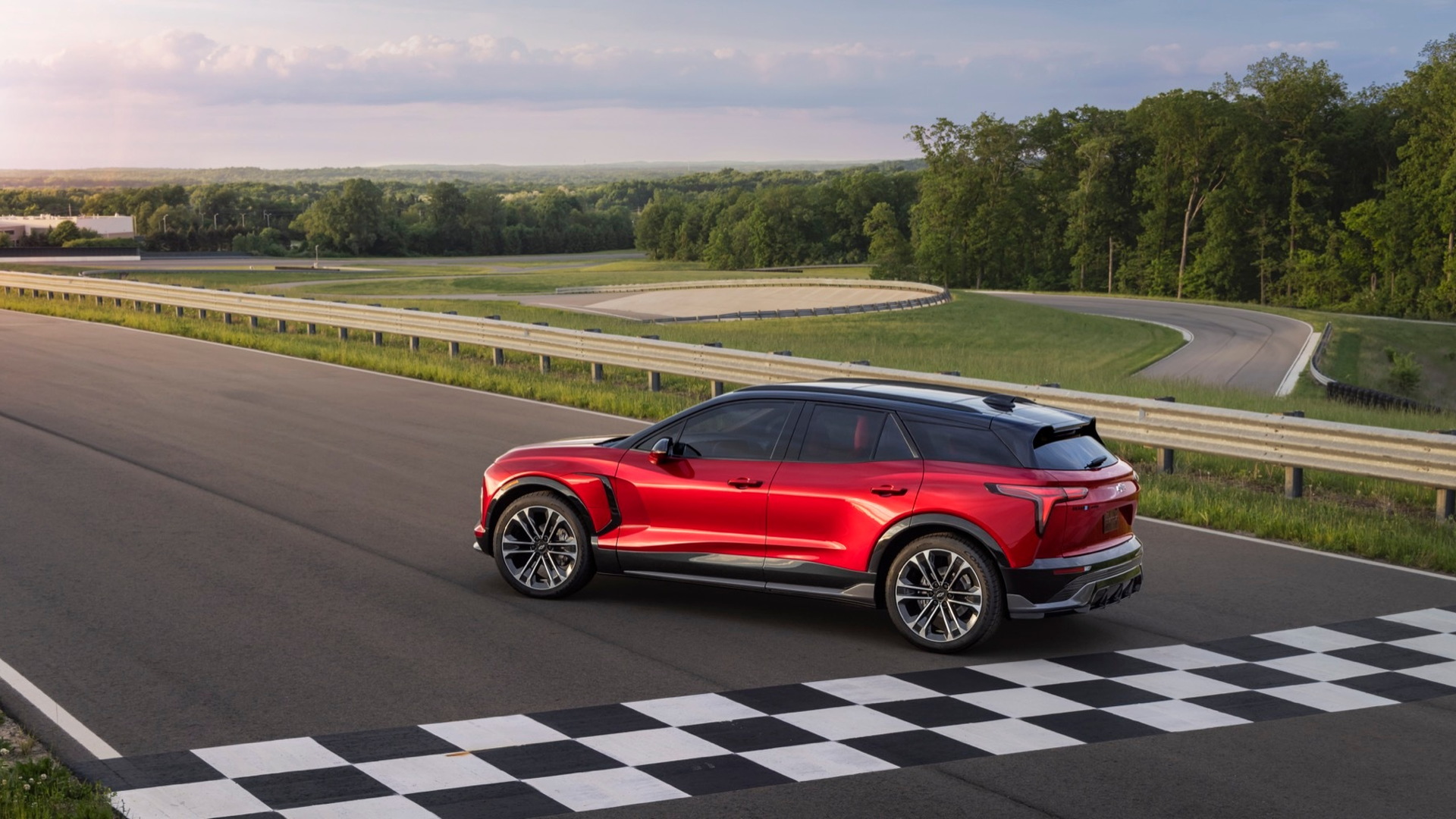 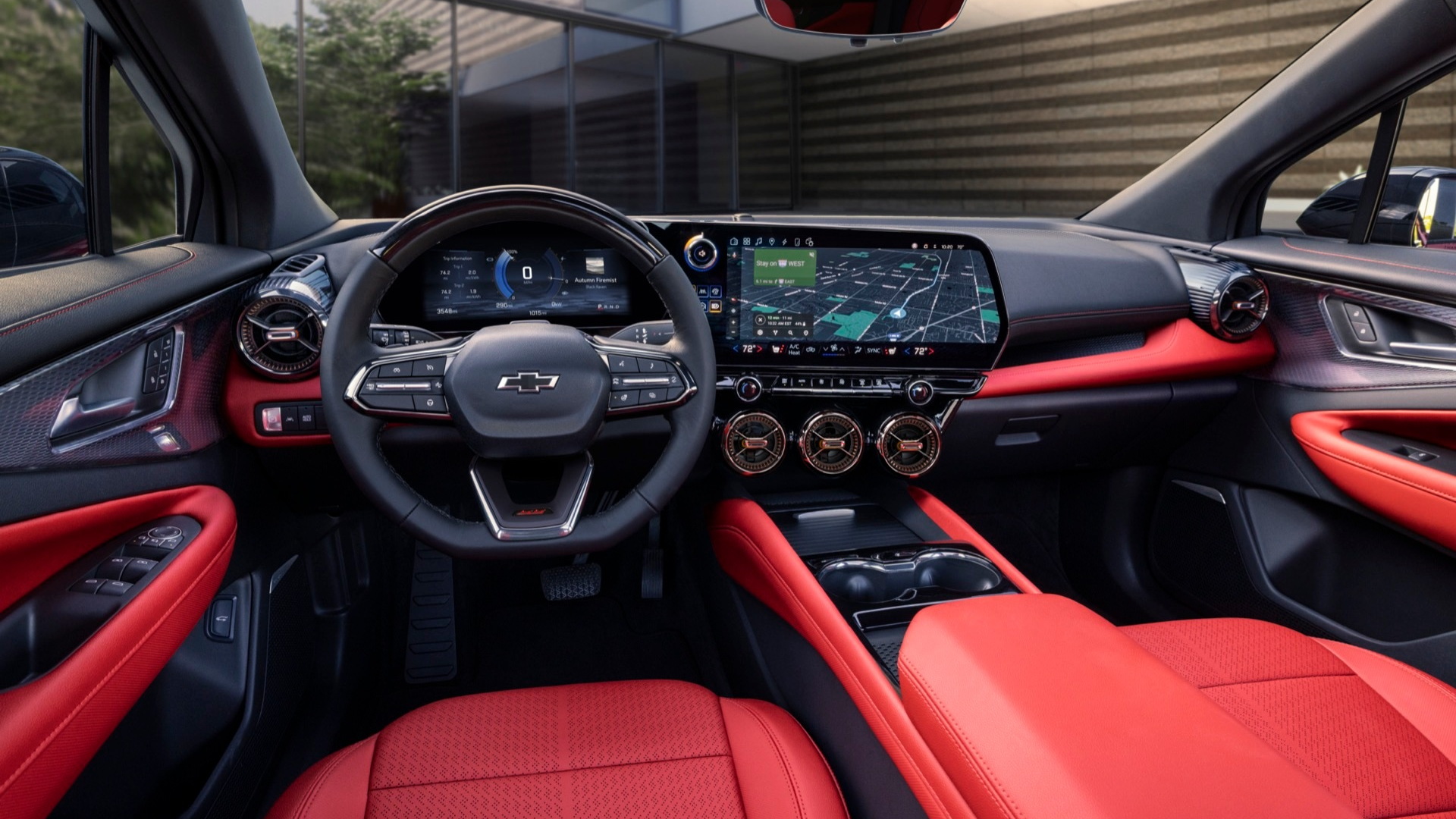 Chevrolet unveiled the 2024 Blazer EV on Monday, and the battery electric crossover shares nothing except a name with the internal combustion Blazer that relaunched in 2018.

“It’s Blazer in name, much like our ICE, but the similarities stop there," Steve Majoros, VP of Chevy marketing, told journalists in a briefing last week in Detroit. "There isn’t a single shared component in this vehicle at all between these two products.”

Offered in four trim levels, multiple drive configurations, three battery packs, and an estimated range of up to 320 miles, Chevy casts a wide net in luring shoppers from rival EVs such as the Ford Mustang Mach-E and Kia EV6, as well as from the gas Blazer and other crossover SUVs.

The Blazer EV blends design elements of the gas Blazer as well as the Camaro muscle car, with a coke-bottle design that sweeps down the belt line between pronounced wheel haunches. With short overhangs and a roofline that pinches the rear end into an odd rear quarter window, the Blazer EV strikes a sort of muscle-car profile within its electric crossover proportions.

Chevrolet reps boasted that the Blazer EV has the longest wheelbase in the battery electric crossover segment, but we couldn't corroborate that because specs were not finalized at press time. Front seats felt spacious even with a thick center console, and the available fixed glass roof gave it any airy feeling common to EVs. It cuts into head room in the back, however, but 6-foot passengers have enough leg room to sit a little lower if their hair brushes against the glassy sky. The sightlines out front are much better than in the Camaro, necessarily.

The display model was a top of the line SS riding on buff 22-inch wheels. Up front, SS models feature a black insert and fake air intakes styled like the Camaro SS. RS and SS grades get a standard light bar that illuminates inward over the bowtie badge as the driver approaches or leaves. While charging, the light bar sequences in blue, and the lightbar fills up more as the battery gains more charge.

Chevy did not disclose the three available battery pack sizes, nor did it reveal the motor output across the lineup. What is known is that Chevy is offering the Blazer EV in three different drivetrain configurations. The base 1LT comes standard with front-wheel drive and a GM-estimated 247-mile range. It will be the last Blazer EV model to go on sale, expected in the first quarter of 2024 along with the Police Pursuit Vehicle. The base Blazer EV has a targeted price of $44,995, including destination.

The $47,595 2LT comes with FWD and a range estimate of 293 miles, or it can be optioned with dual-motor AWD. Things get interesting on the RS grade, which can be had with FWD and a medium-sized pack for $51,995. Or it can be had with the larger battery pack and rear-wheel drive for a more performance-oriented driving experience, we expect. Dual-motor AWD is also an option on the RS. Range for the RS peaks at 320 miles.

The 2LT and RS arrive first, expected for summer 2023. Chevy said that a limited number of reservations will be available at launch, but that the price and model of orders will be guaranteed in the first model year.

The top SS follows, and comes standard with AWD and a 290-mile range. It will cost $65,995. Even without motor and battery specs, Chevrolet said the SS is rated at 564 hp and 684 lb-ft of torque, and in its WOW (Wide Open Watts) mode, it can go from 0-60 mph in less than four seconds. Each Blazer will have an independent front and rear suspension, with a double wishbone up front and multi-link setup in back. An optional suspension package will be offered on the SS, presumably with adaptive damping.

The latest vehicle to employ GM's Ultium battery propulsion system, the Blazer EV follows the launch of the Chevrolet Silverado EV pickup truck earlier this year, and will be followed by the smaller Equinox EV as part of GM's plan to introduce 20 new electric vehicles for the North American market by 2023.

The flexible platform enabled Chevy to offer the unusual number of drivetrain options.

“It was enabled by the Ultium," said Bret Dick, the lead development engineer on the Blazer EV. "We’re able to do it, so whatever fits the customer, depending on where you live in the U.S., and where you want to drive. As a development engineer it drives me crazy because I have to develop them all but when it comes to supporting the customer, it’s great because you can pick what best fits your lifestyle.”

The Blazer EV has an 11.5 kw onboard charger for AC charging at home, and it has DC fast-charging capability of up to 190 kw. As long as that Level 3 charger can pump out that much juice, the Blazer EV can add 78 miles of range in about 10 minutes, Chevy estimates. It has at least three regen brake settings, including a paddle on the steering wheel for one-pedal driving, similar to the Chevrolet Bolt EV and EUV.

The Blazer EV comes equipped with a wealth of standard features, including a 17.7-inch touchscreen that cants toward the driver under the same pane of glass housing an 11.0-inch digital gauge cluster. Chevy reps insisted it is not shared with the Cadillac Lyriq. Driver-assist features such as automatic emergency braking with pedestrian detection front and rear, active lane control, and automatic high beams come standard, and the SS gets Chevy's Super Cruise limited hands-free driving system.

With electric iterations of the Silverado, Blazer, and Equinox all on the way, GM emphasized that it's transitioning to electric as the market demands.

"When will the market convert to all EVs? We don’t know but at some point, right?" Majoros asked rhetorically. "In X number of years, we won’t call it the Blazer EV, it’ll just be Blazer, it’ll just happen to have an EV battery propulsion system."