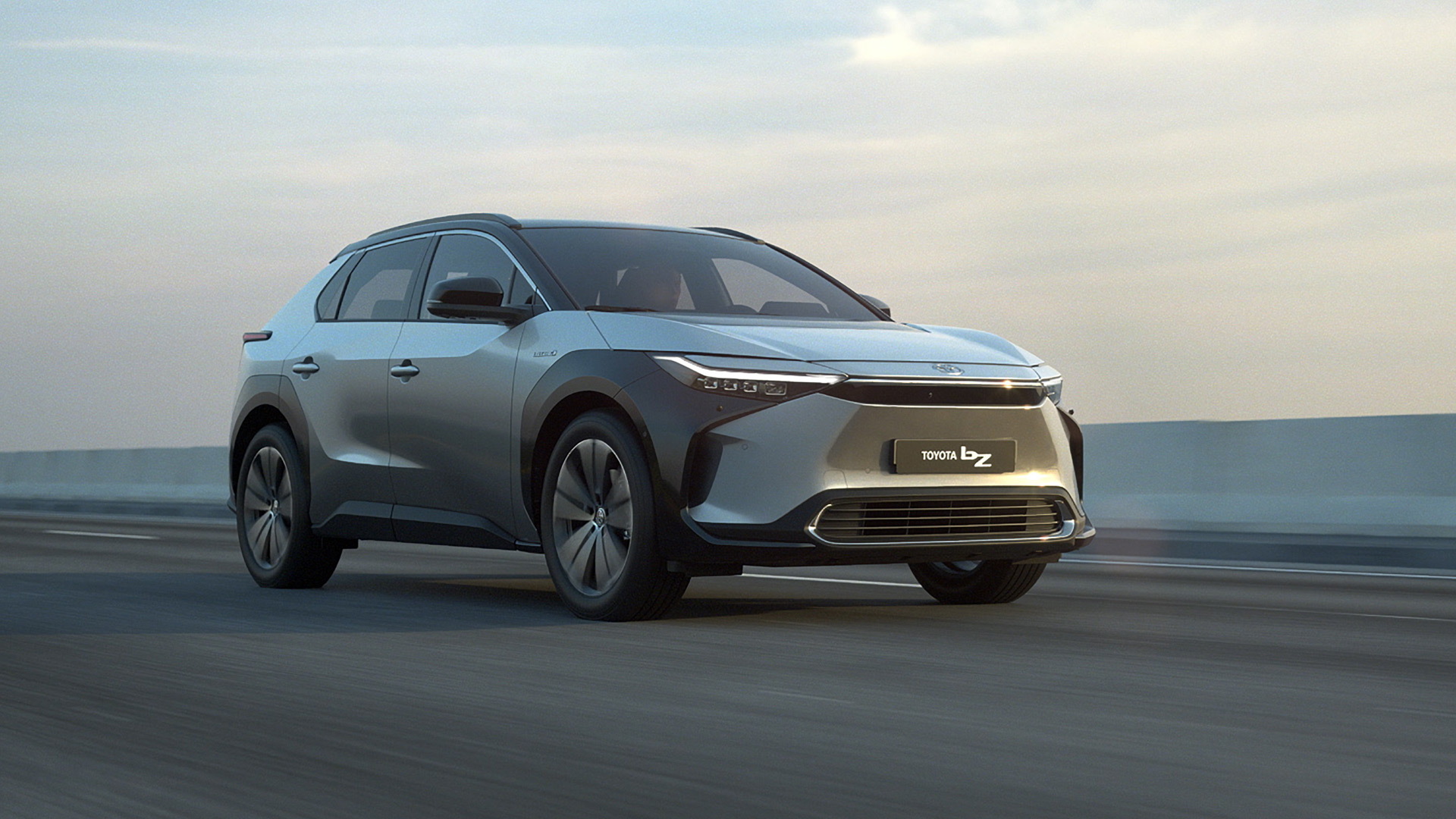 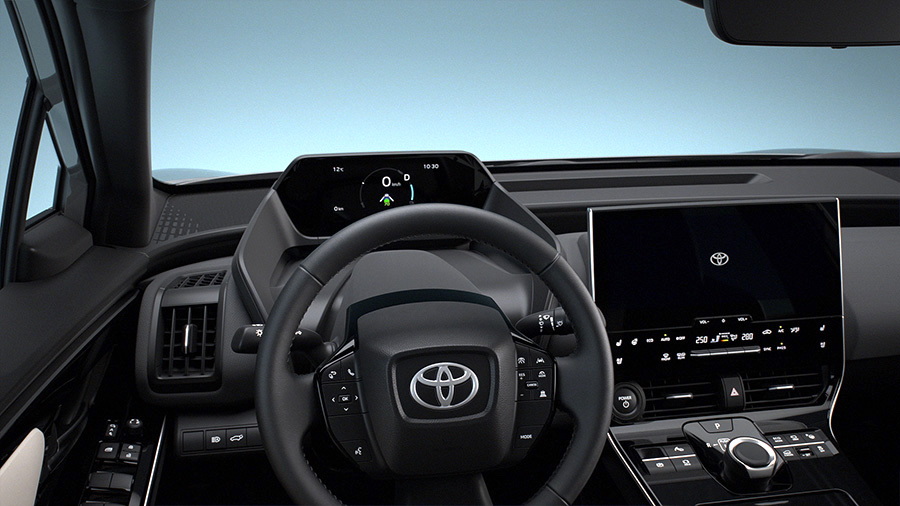 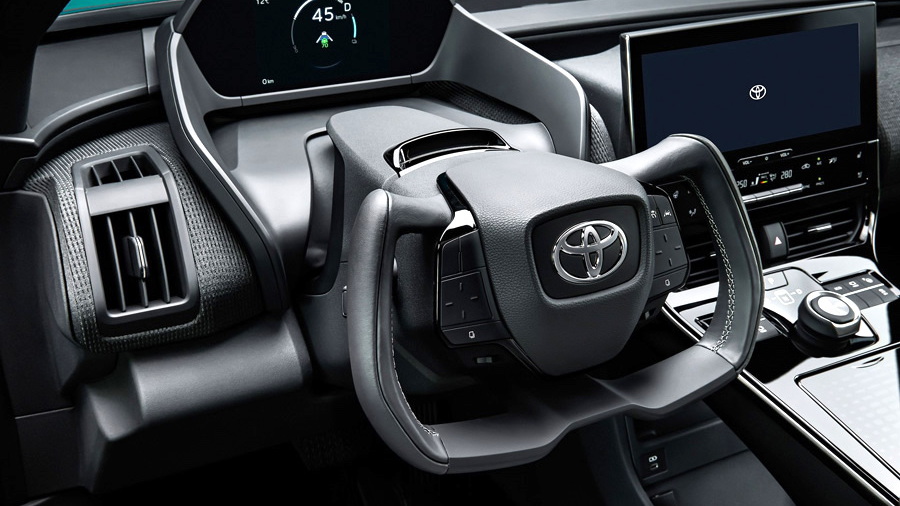 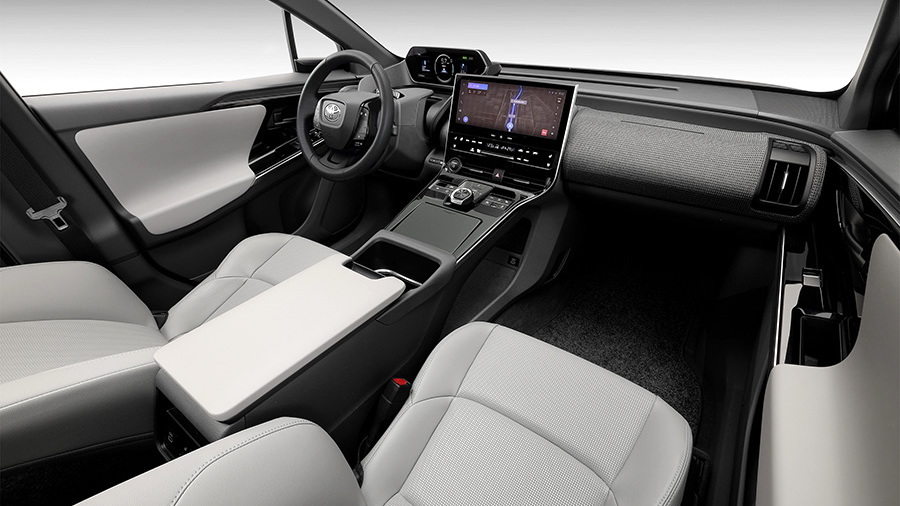 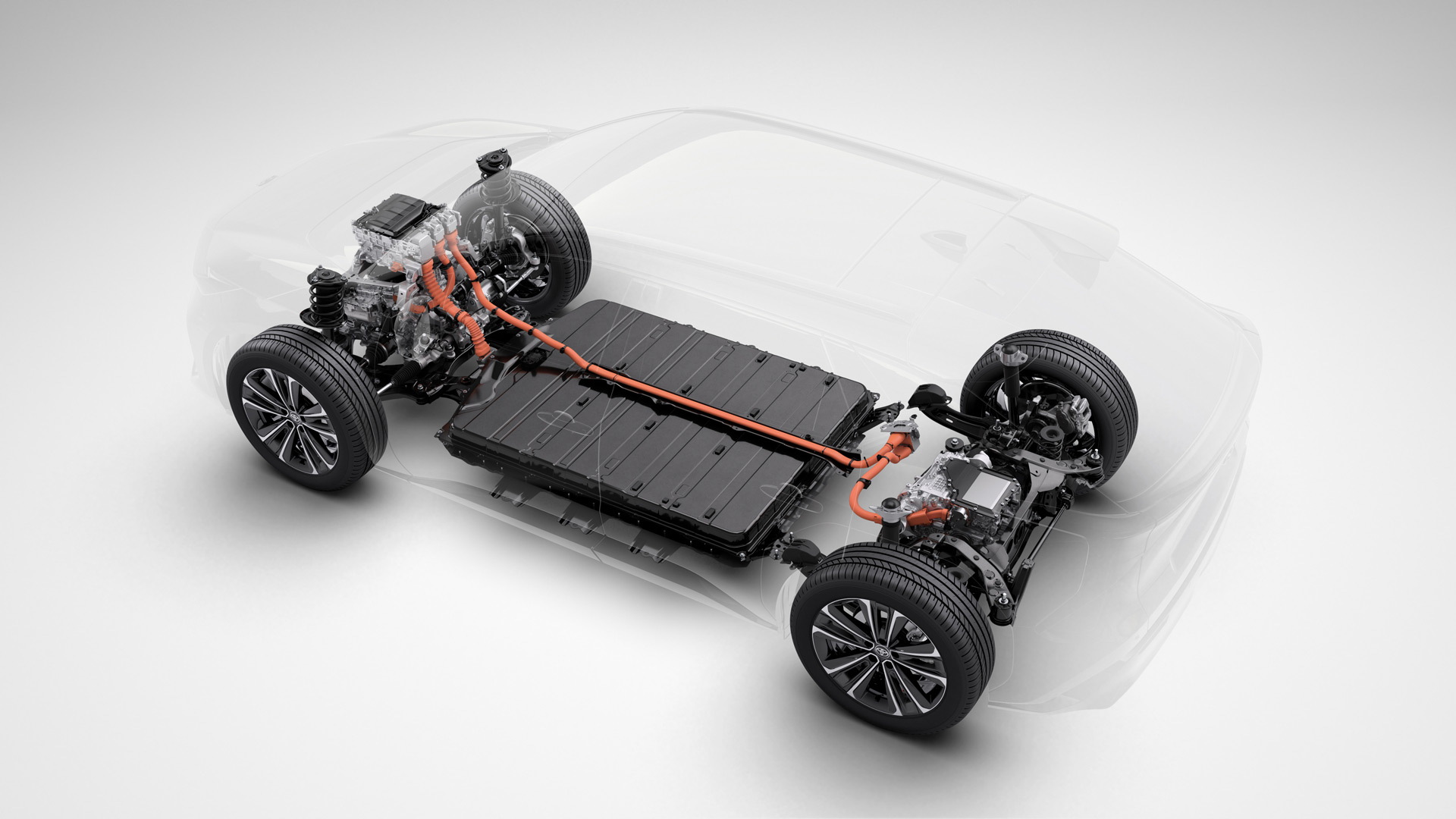 Toyota on Friday revealed some new pieces of information about its upcoming fully electric SUV, the 2022 bZ4X, which leads a lineup of “bZ” EVs and is described as “overturning the common idea that electrified vehicles are tedious.”

From a yoke not entirely unlike the one Tesla introduced earlier this year on the Model S Plaid to a solar roof, radiant heating, and bi-directional charging, there’s a whole lot to discuss with the introduction of bZ4X.

The bZ4X is one of the two fully electric models Toyota plans to introduce in the U.S. soon, and it could help Toyota carve out a niche in the growing market for this first mass-market EV entry. It will have a battery that Toyota is vouching for in a way manufacturers haven’t yet: Toyota claims its battery pack will still hold 90% of its original capacity after 10 years.

In addition to the Toyota models, there’s already another model to consider, coming from the same platform, around the time: Subaru in August provided a first look at its Solterra EV, which was developed together with the bZ4X and is closely related. It hasn’t yet revealed specs or dimensions, but in all likelihood it will be within an inch or two of the Toyota in all critical dimensions.

Toyota doesn't think EVs will catch up as rapidly over the next decade as many other automakers now do; but even amid a hybrid-focused lineup they'll be increasingly important, and the bZ4X speaks to a whole generation of Toyota EVs to come.

With that in mind—and that Toyota has revealed the bZ4X in a global sense, with U.S. details not yet confirmed—here’s a list of talking points on what’s surprising, what’s new, and with some context, what might or might not distinguish Toyota’s upcoming EV in the market. Does it measure up to the tech leadership of Prius and Mirai?

No game-changer in range or charging. Toyota is using a 71.4-kwh battery pack, and it anticipates a range of about 310 miles to the WLTC standard, for the front-wheel-drive version—likely amounting to something in the vicinity of 250 miles EPA based on other automakers’ efforts. In kwh per mile, that means the Toyota might be better than the Volkswagen ID.4 and Ford Mustang Mach-E but not up to Tesla Model Y standards. Likewise, with just a 6.6-kw onboard charger, it gets the minimum hardware needed for a long overnight charge. But it has what it needs for road-trip charging, with up to 150 kw and the capability to get to 80% capacity in 30 minutes. 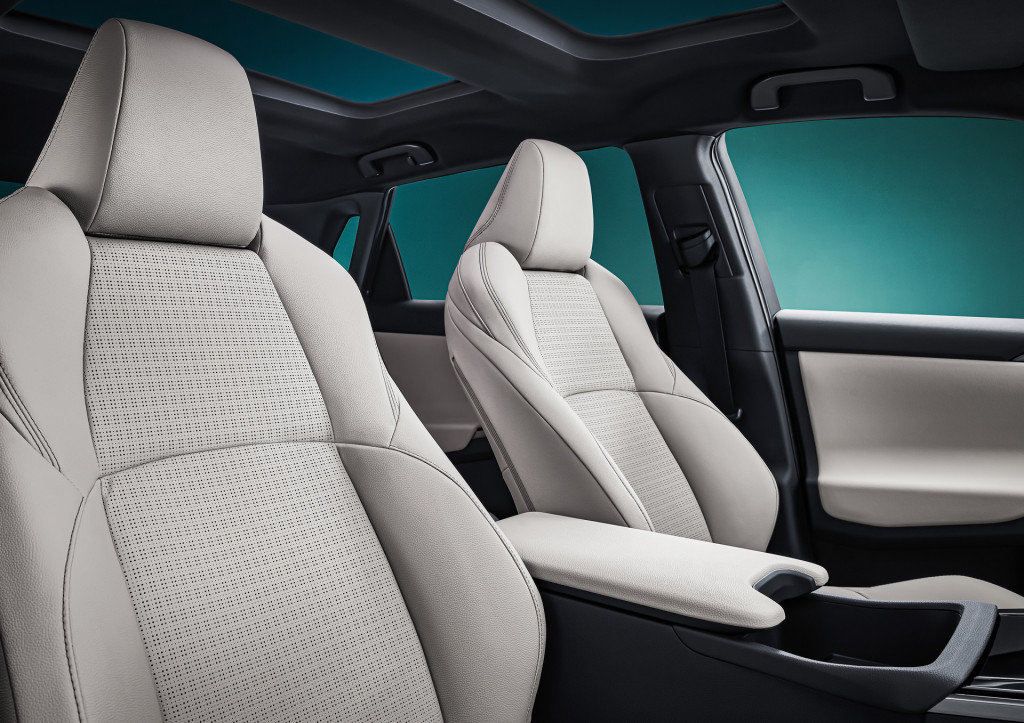 Bigger inside. The bZ4X was built on a so-called e-TNGA platform for dedicated electric vehicles—not a shared platform with internal-combustion models—so the vehicle reaps the advantages of not designing for engines, fuel tanks, and tailpipes. And it shares that “space surprise” with other models like the Volkswagen ID.4 that are built on a dedicated EV platform. While the bZ4X is about RAV4-sized on the outside, Toyota claims front and rear legroom on par with the “medium segment SUV” set.

Sensible, not Ludicrous. This is no performance model, but Toyota clearly isn’t ready to outshine its hybrids with fully electric performance. Toyota released a 0-62 mph figure of 8.4 seconds for the 201-horsepower front-wheel-drive version, or 7.7 seconds for the 215-hp all-wheel-drive version. To compare, Toyota’s own acceleration figure for the RAV4 Prime is 5.7 seconds to 60 mph, and the front-wheel-drive RAV4 Hybrid does it in about 7.5 seconds. 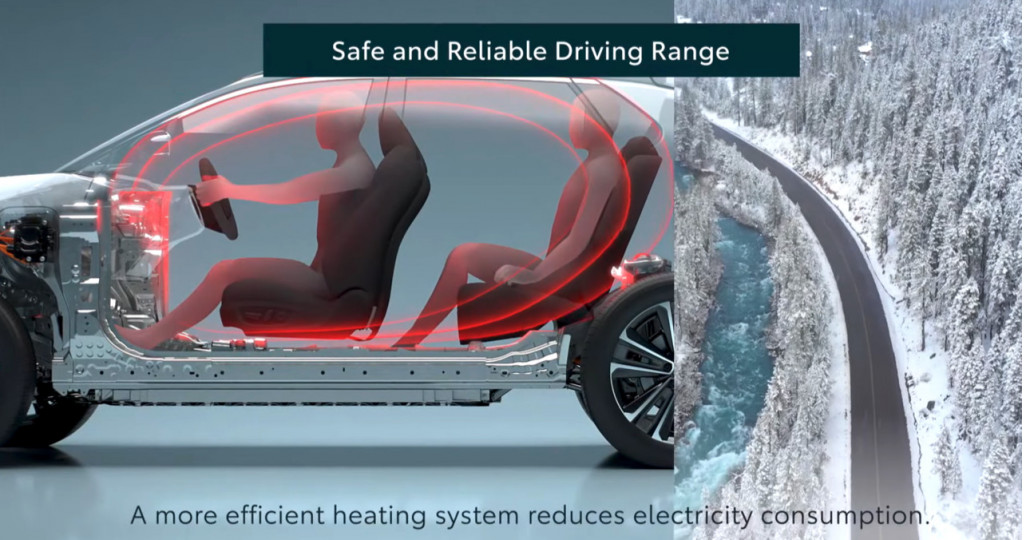 Radiant heating. While there’s a heat-pump to help with chilly weather—something Toyota has offered in some of its vehicles for years—the automaker reaches deeper into the toolkit here. It says that the bZ4X’s radiant floor heat is a first in its vehicles, and we’re not aware of any other model that offers it for the U.S. market. It’s an idea that’s been in the works for years. One such project, headed by IAV and Louisenthal, said that a system using foils integrated around the cabin could help save the energy required to heat the car by up to 20%—but just installing it in the floor could go a long way to that. Toyota will offer seat and steering wheel heaters, too, of course. 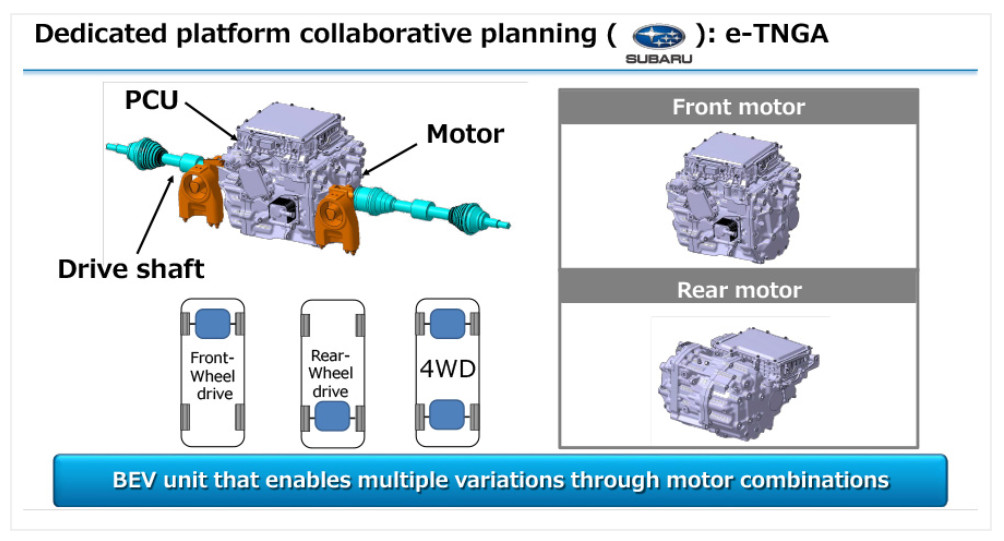 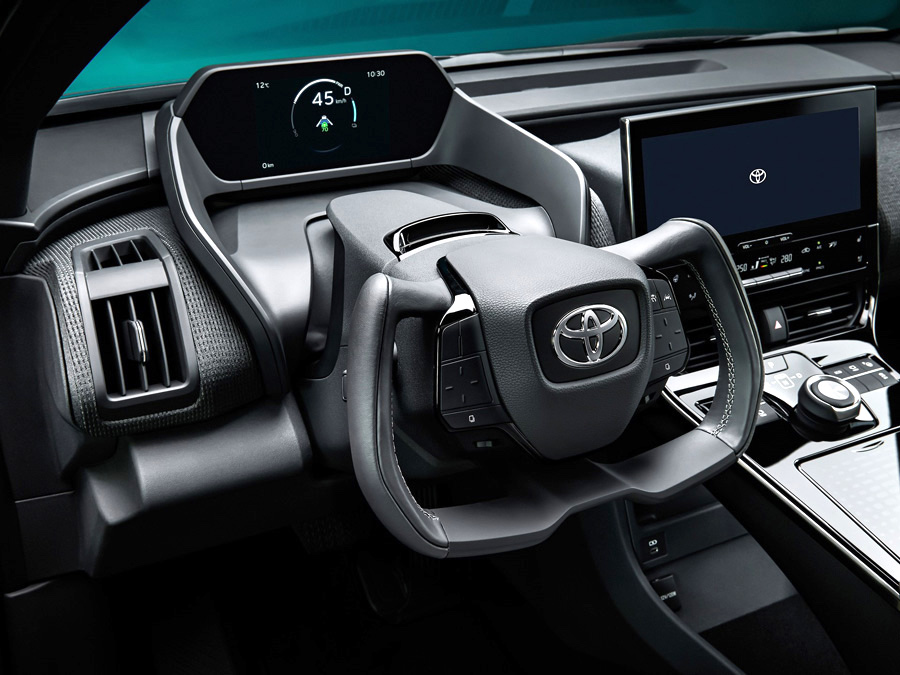 There’s a yoke. Yes, like Tesla; and it’s steer-by-wire. While the yoke is initially just for the Chinese markets, it’s due to be fitted on other vehicles launched from 2022 onwards—although to speculate, we wouldn’t peg it as likely for the U.S. for a few years yet. Toyota calls it a “uniquely shaped steering wheel," and it goes 150 degrees lock-to-lock, with no need to change grips mid-maneuver. It describes the system as “greatly reducing the burden on the driver for U-turn, garage parking and on winding roads”—something that would indeed make it very different than some have observed of the Tesla system. Toyota independently controls the steering torque versus the steering angle and what the driver feels, with drive modes changing the behavior. But wait, there’s more: Toyota claims the yoke brings more leg room, and whether you get the yoke or the steering wheel, the instruments are up high and pushed back so as to help reduce eye strain. 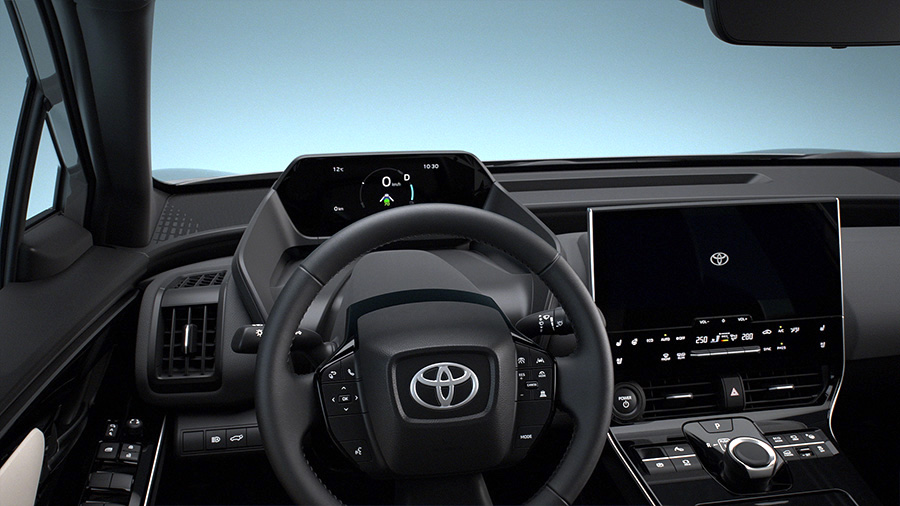 Next-level interface. We have a lot of questions about the interface, which appears not to follow the layout of recent Toyota or Subaru systems. Toyota says it adopts over-the-air updates, plus cloud-based navigation that will include traffic info, parking space availability, and charging stations. With expanded voice recognition, you’ll be able to operate the wipers and climate control via voice. The old Prius shifter is gone in favor of a shift dial. And there’s a phone-based digital key system available that allows sharing of your “key” with friends and family when needed.

Rooftop solar panel. Toyota says that the solar cells charge the traction battery, restoring charge when the vehicle is parked out in the sun or during natural disasters, and it can generate an “electricity equivalent” of about 1,120 miles per year. But as we tallied last year in a Hyundai Sonata Hybrid with rooftop solar, don’t expect anything close to the maximum claims of such systems if you don’t live in Southern California or Arizona. 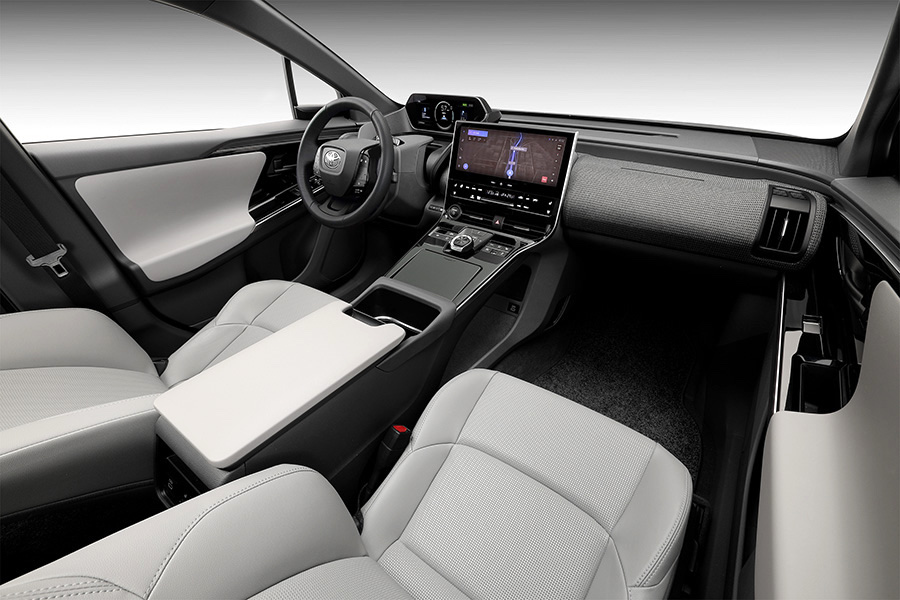 Upholstered instrument panel. This is one of the design curiosities Toyota pointed to, and we suspect it might serve a purpose in helping soak up high-frequency cabin noise. It followed that with a note of the “high soundproofing glass and wind-noise reduction” aiming at clear conversation when driving.

Remote parking. The bZ4X will include an “Advanced Park” feature that’s likely similar to what’s offered in the Lexus LS 500h hybrid luxury sedan, but with remote control permitted. There’s no comprehensive driver-assistance feature mentioned here yet, but the bZ4X adopts an “evolved” version of what the automaker calls Toyota Safety Sense. That means new functions yet to be detailed, plus an expanded detection range for the radar and camera sensors. 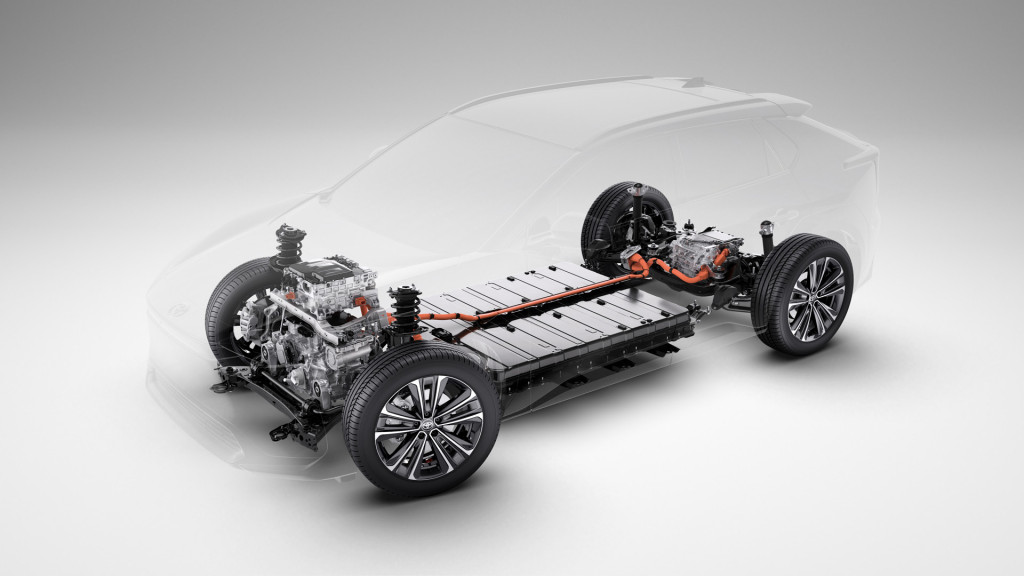 Bi-directional charging, only in Japan? Toyota says that the bZ4X can be used as a mobile power station, supplying electricity to homes and appliances during natural disasters or power outages, or with home solar, it can be charged with surplus energy from the daytime, to be released by the vehicle to supplement nighttime use. No other automakers—not even Tesla—offer such functionality now as an actual feature set on the vehicle, although Ford plans a comprehensive approach with the F-150 Lightning, Lucid and Rivian have teased a similar ability set. So far based on what Toyota has said, that aspect might only be for the Japanese market.