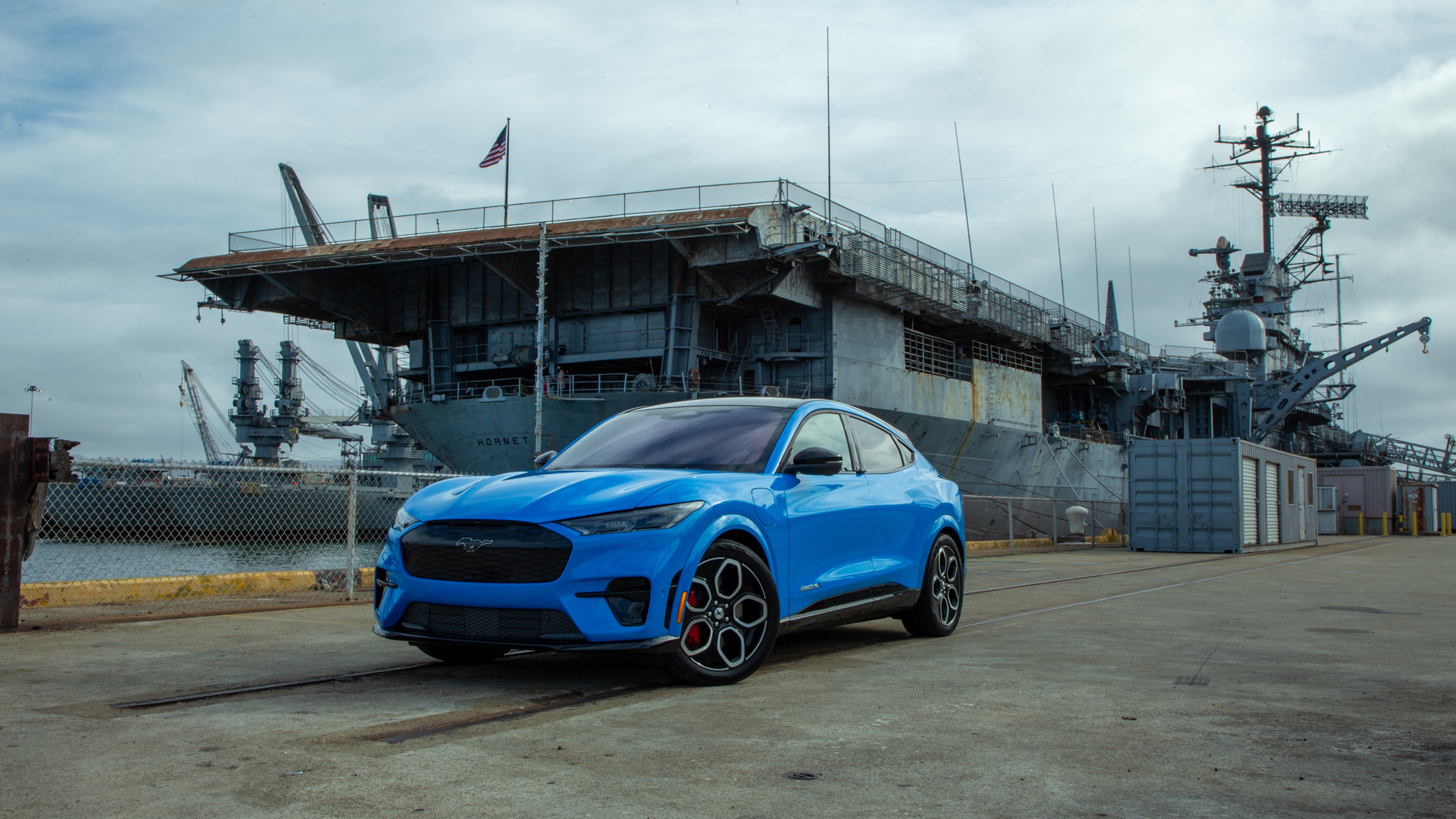 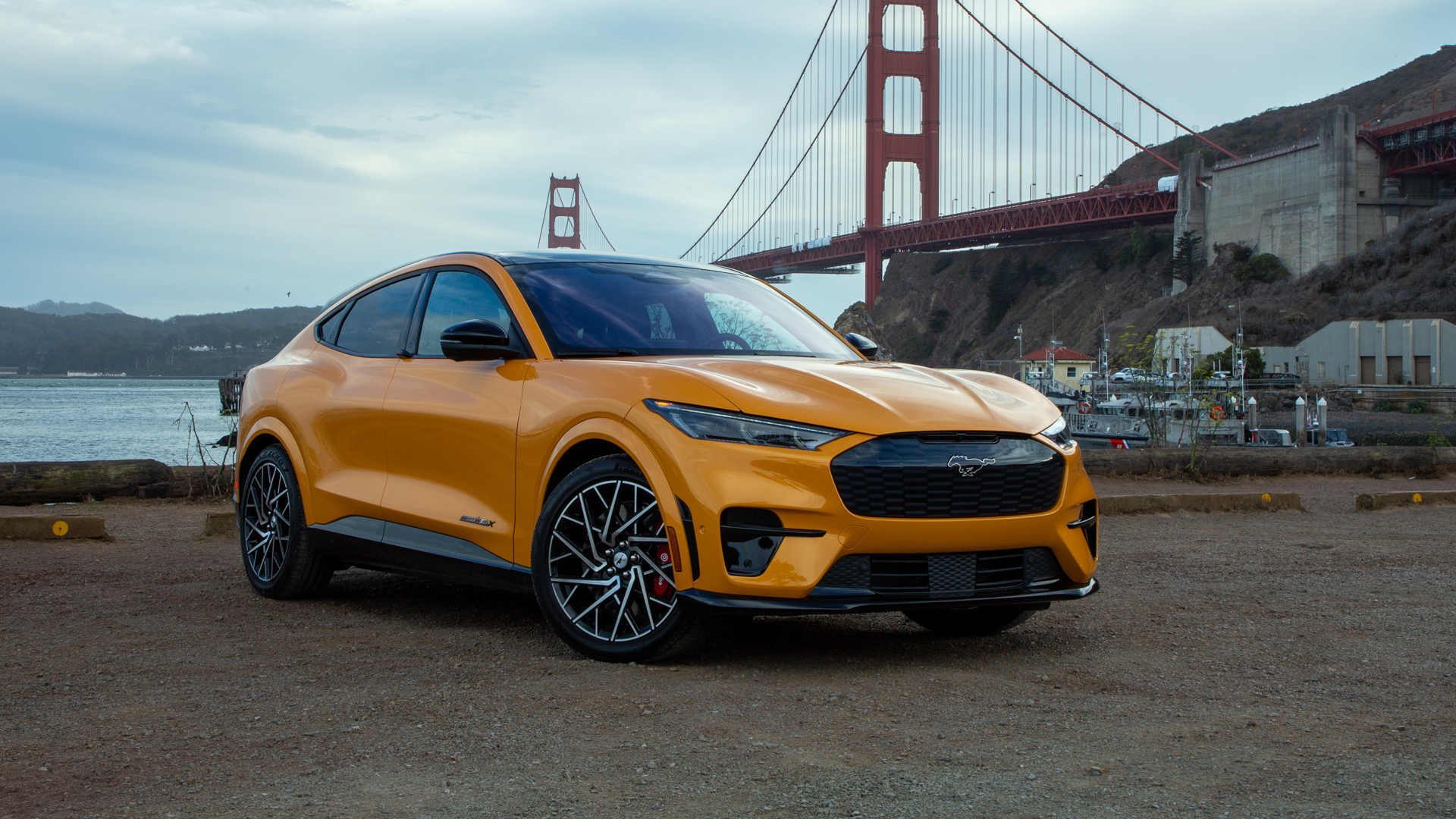 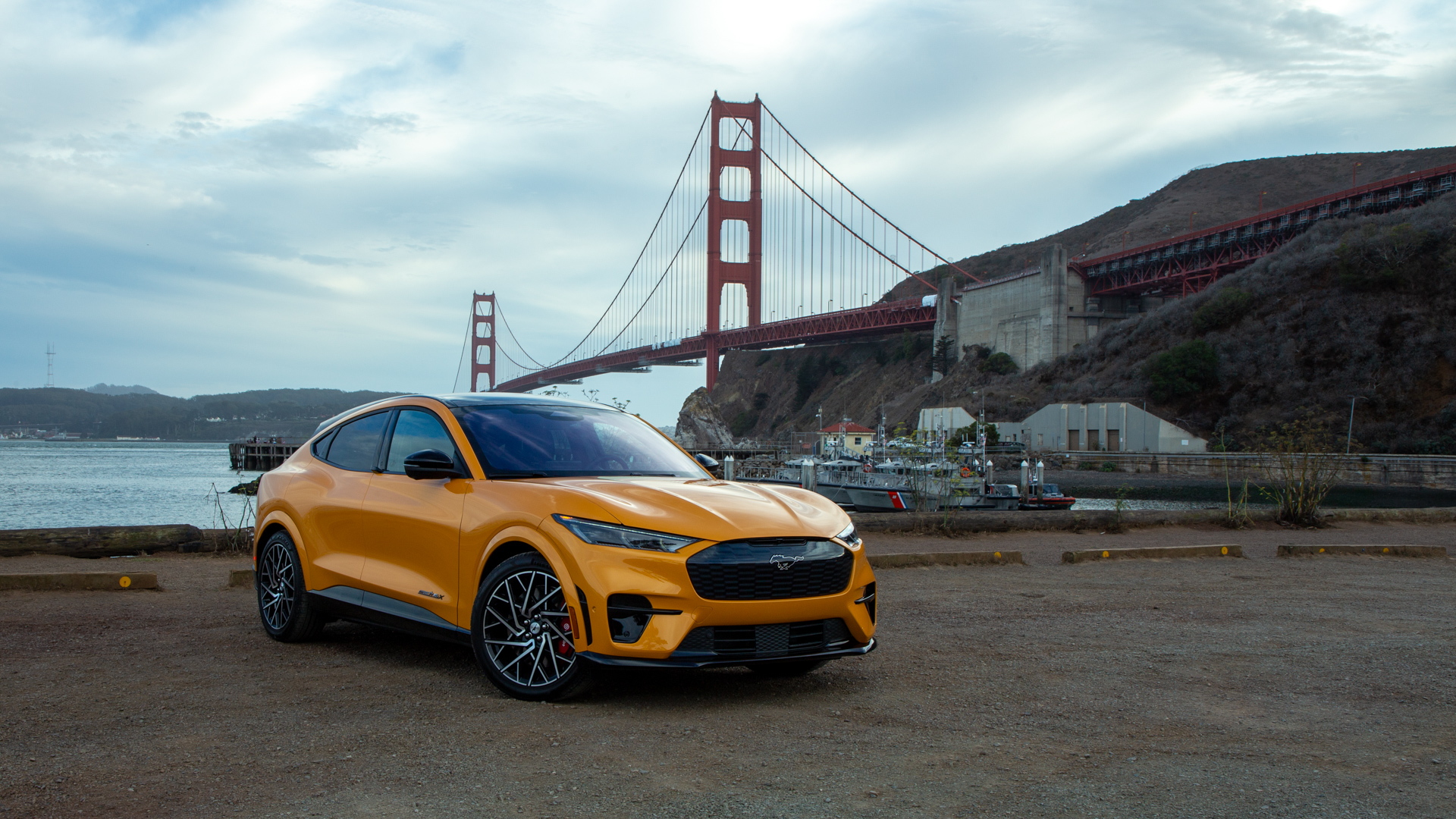 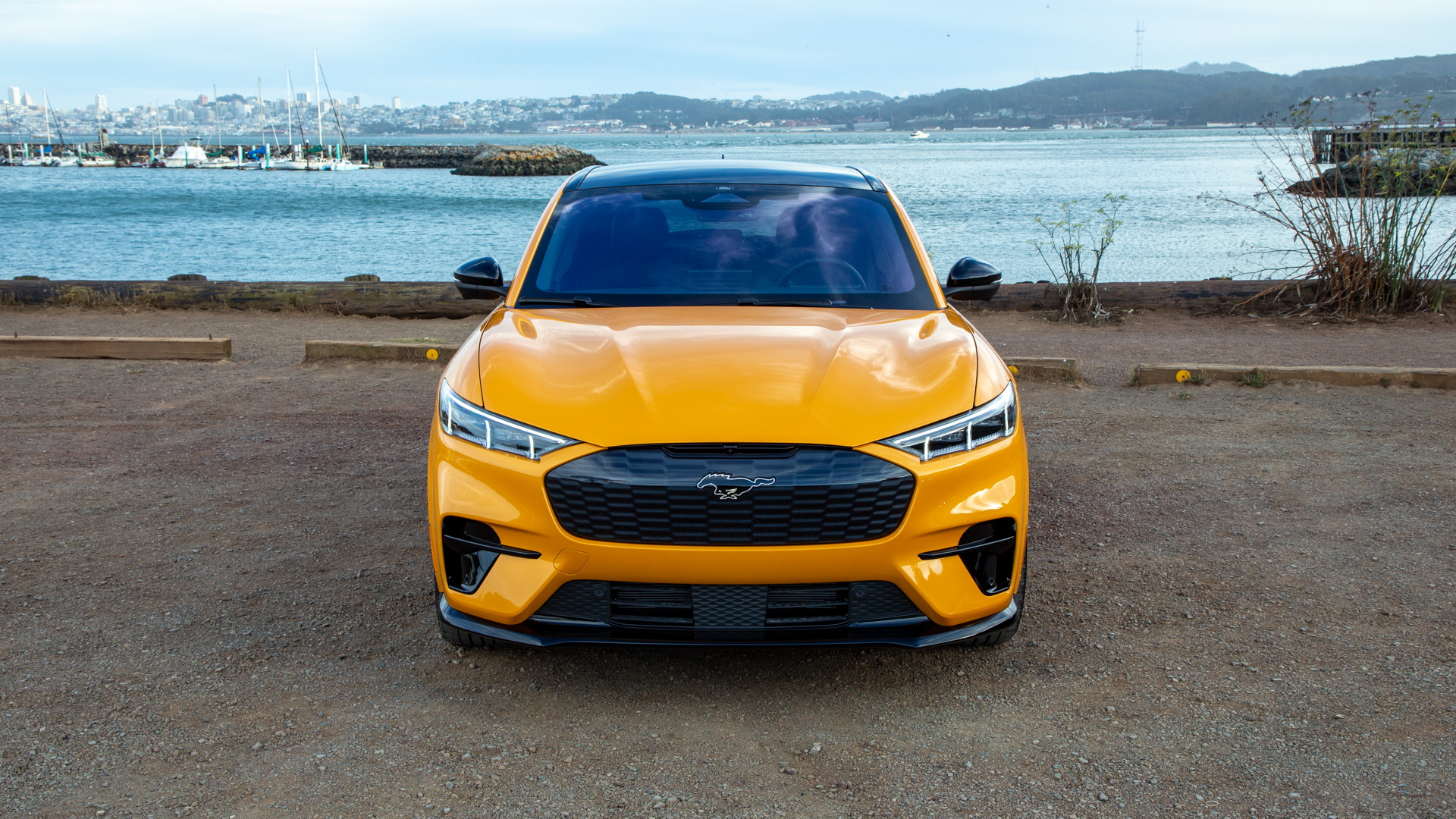 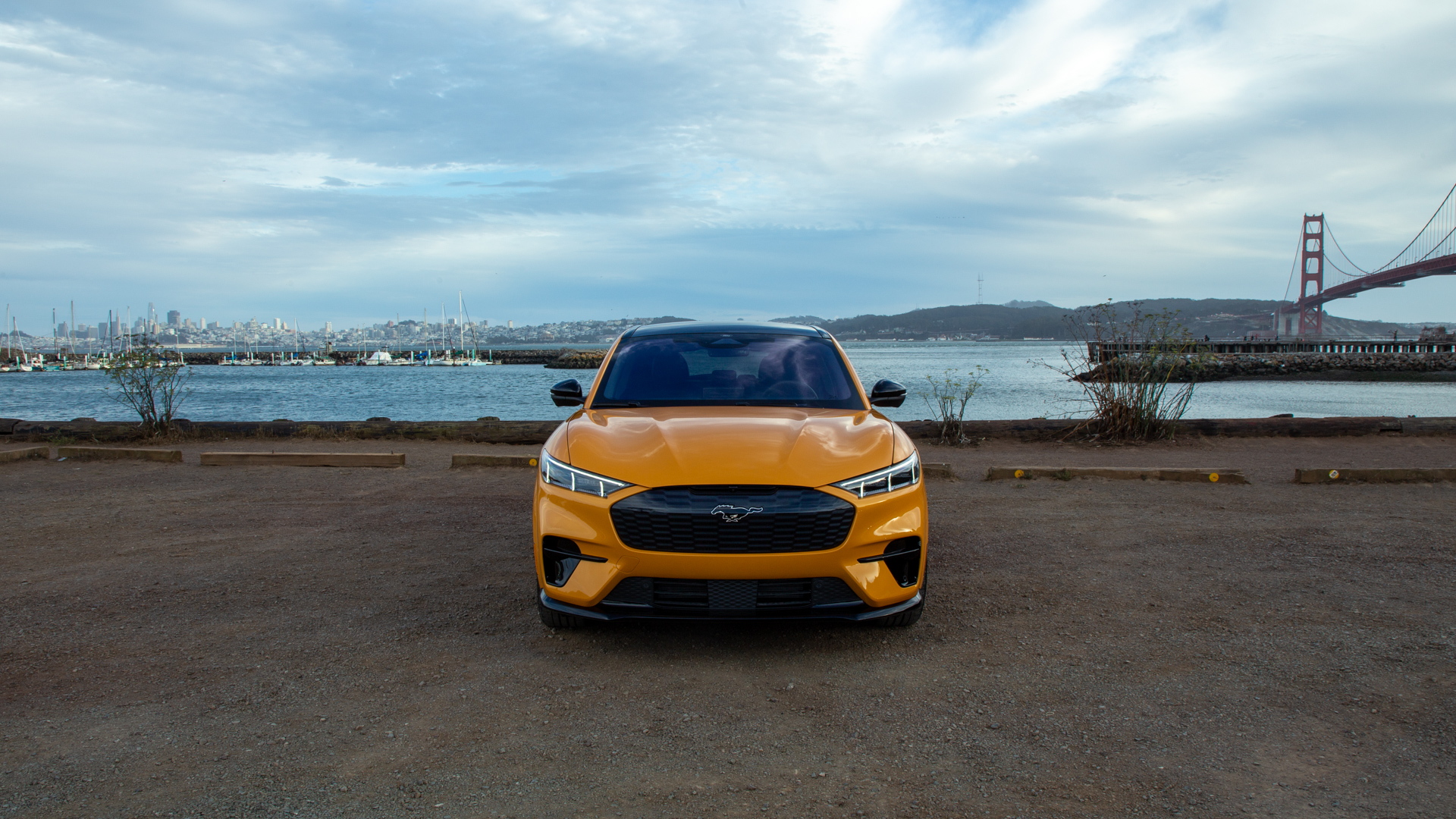 As if carrying just one legacy name wasn’t enough, the 2021 Ford Mustang Mach-E GT adds a second set of historical baggage by tacking on a pair of initials that mean something extra to Ford. The “GT” distinction has only been worn by a few vehicles throughout the Blue Oval’s history: Mustangs, the Le Mans-winning Ford GT40, and the pair of modern Ford GT supercars from the 2000s.

That gives the Mach-E GT a lot to live up to, as it attempts to redefine what performance will mean for Ford as it electrifies its lineup. This is a vehicle full of GT firsts: first to be all-wheel drive, to be battery powered, and to be an SUV. To see if it can live up to its top-name billing, I traveled to San Francisco to put it through its paces on winding coastal roads north of the city and on an autocross course on the decommissioned Naval base in Alameda, Calif. 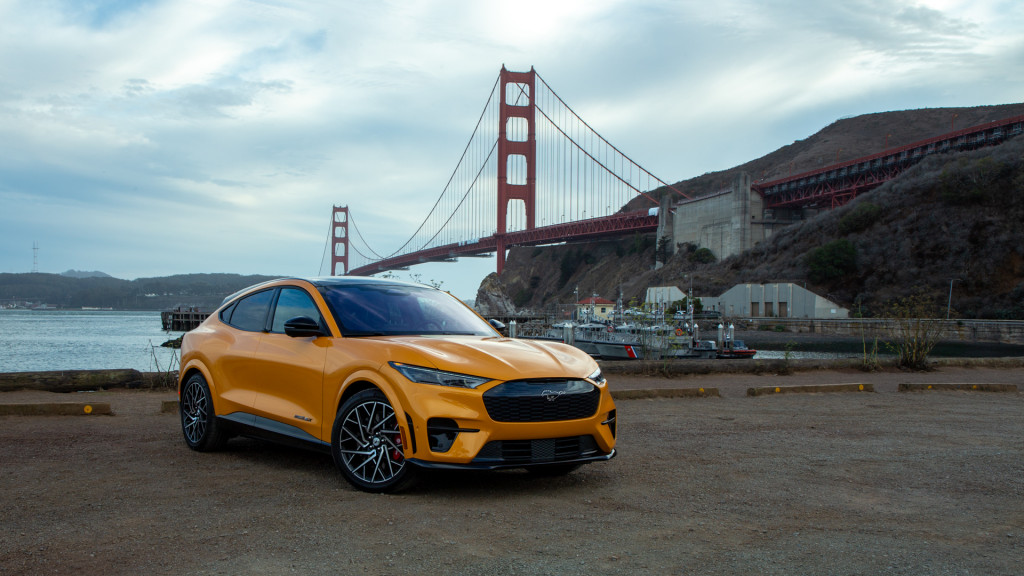 What makes a GT?

GT models start at $61,000 (including destination charges) and are most easily picked out via the carbonized gray grille that replaces the body colored one on the SUVs nose. It rides 0.4-inch lower than the standard Mach-E to lower the center of gravity even more, gets sportier front and rear fascias, and features a large GT badge on the liftgate as well. The Mustang GT gets a “5.0” badge on its front fenders, but the Mach-E GT only makes do with a small logo that indicates it has an electric AWD system. There are also sport seats with more bolstering, upgraded brakes with larger 19-inch rotors front and rear, and wider tires than the standard Mach-E (9 vs. 8 inches).

Building on that is the GT Performance Edition, which costs an extra $5,000. For early customers, this price seems to be worth it, a Ford spokesperson told us that the company was surprised by the number of Performance Edition orders it was receiving. The Performance Edition adds upgraded Brembo front brakes, Pirelli P Zero summer tires, more bolstering on the front seats, and most importantly, a Magneride adaptive suspension that replaces the fixed suspension on the standard GT. 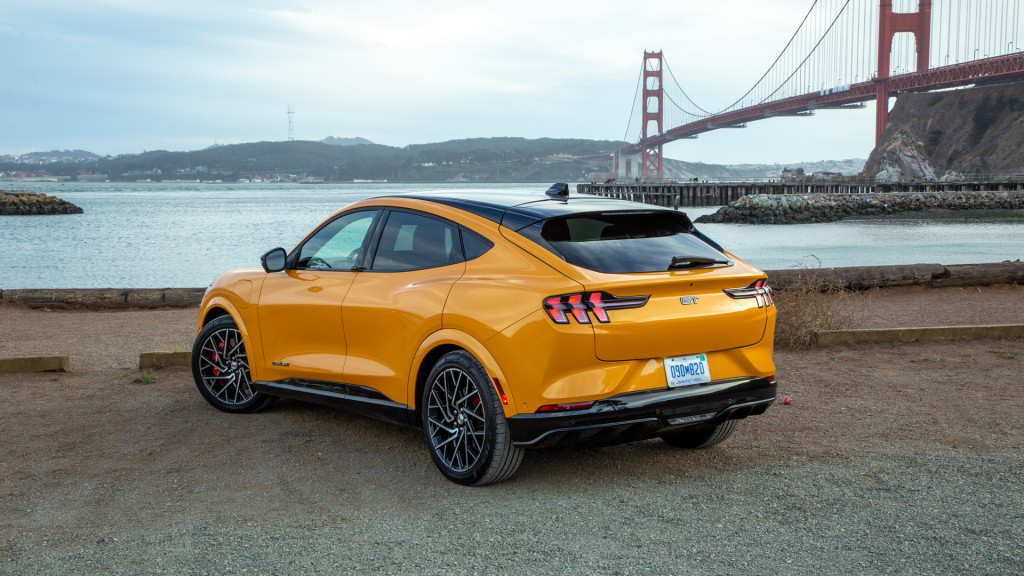 The GT gets a significant power boost over the other Mach-E variants, with peak outputs of 480 hp and 600 lb-ft of torque. That is a huge step up from the Premium/First Edition models that also offer AWD along with the larger 88-kwh battery pack, those top out at just 346 hp and 428 lb-ft. In the Performance Edition, horsepower is unchanged but peak torque climbs to 634 lb-ft. Ford says this is because the stickier tire allows the motors to send out more power while maintaining grip, and thus the Performance Edition gets a higher peak power output from the battery than the regular GT.

This jump in power drops the 0-60 mph time a full second, to 3.8 seconds for the GT. The Performance Edition is even faster at 3.5 seconds, which speaks to the difference that tires can make. Strangely, the GT doesn’t feel that much quicker off-the-line than the other Mach-E variants I tested—all of them feel pretty snappy. The difference comes from about 40 mph and beyond, where the standard Mach-E starts to lose steam and acceleration slows down quickly once you pass highway speeds. But the GT pulls and just keeps on pulling into extra-legal territory with quiet ease.

When Ford announced the GT’s specs and pricing, we were surprised to find that the despite the additional power it would get the same EPA estimated 270 miles of range as the other models with that drivetrain/battery combination. The GT Performance Edition gets slightly less, with an estimated 260 miles. The numbers I observed during my time behind the wheel weren’t a good representation of the expected efficiency you can get in the GT; I spent much of the time pushing the SUV rather hard. 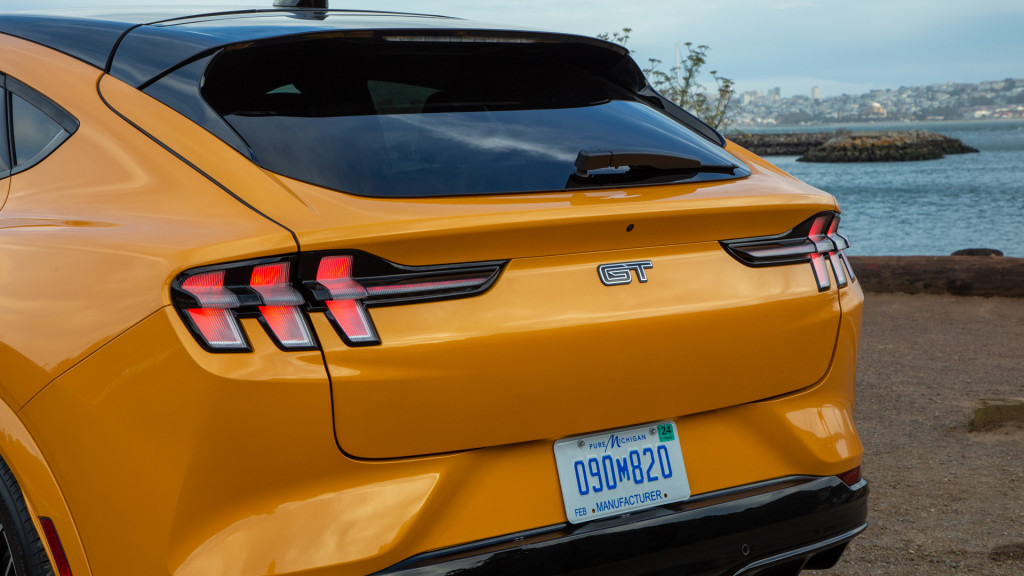 Performance Edition is the way to go

The added torque is nice, but it’s not the reason you should get a Performance Edition. It’s all of the other upgrades besides the power boost, most prominently the Magneride adaptive suspension. It’s a critical addition and a significant improvement over the GT's fixed suspension.

The setup under the GT is fine under most conditions, but when the vehicle is pushed it has some trouble with the Mach-E’s nearly 4,600 pounds of weight. It's softly sprung so there's a fair amount of body roll in the corners, and since the suspension doesn’t control rebound well it sometimes hasn't regained composure in time for another corner. Combine that with numb steering and a tendency towards understeer, and it saps a driver’s confidence in quick, tight maneuvers. All of the straight line speed in the world can’t solve that.

In the Performance Edition with the adaptive suspension however, needed stiffness is added when the vehicle is in its Unbridled or the new Unbridled Extend drive modes. This suspension does a better job of keeping the Mach-E’s weight in check and makes it feel more balanced and agile. Combine that with the added grip from the tires and the more powerful brakes, and you simply feel much more in control from behind the wheel. On both the windy drive route and on the autocross course, this was much appreciated.

Ford does tie the suspension directly to drive modes. It would be nice to be able to change up the suspension settings independently (say if you're in an area with bad roads) and Ford did hint that such capability might arrive via an over-the-air update. 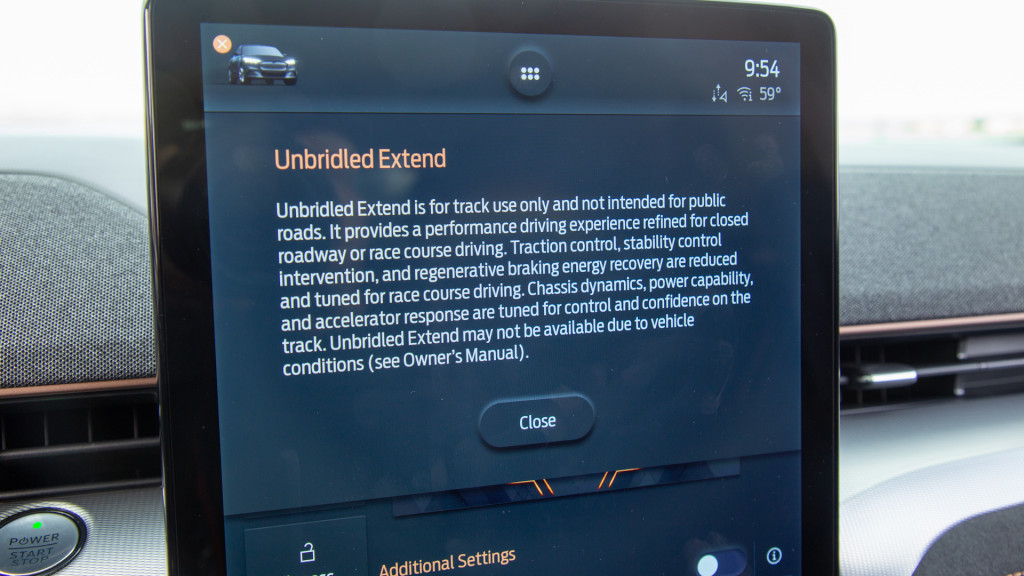 Unbridled Extend puts the reins back on

The GT also adds a new drive mode, Unbridled Extend, that Ford says is meant for track or autocross use. It’s meant to provide sustained power output for consistency in those environments, proactively cooling the battery and shutting the regenerative braking mostly off to control the amount of current flowing in and out. The pedal mapping for both the accelerator and the brakes is more linear, the AWD system adds more rear bias (to a 40/60 front/rear split), and turns down the stability and traction control to allow more slippage.

That makes it sound like this would be the most fun of the drive modes, but it turns out to be a huge letdown. It turns out that protecting the battery pack to offer sustained output means pulling out much of the acceleration. Ford indicated that this drive mode cuts peak horsepower and torque significantly, and though exact numbers were not provided, trust me, it's a significant loss. It makes the Mach-E accelerate more like the Volkswagen ID.4, which isn’t a compliment for a performance vehicle.

I ran the autocross course in both Unbridled and Unbridled Extend, and there was no contest. Unbridled will offer much better lap times and more fun. Unbridled Extend may protect the battery and make for even output over a longer period of time, but I’d rather go out in an Unbridled blaze of glory than go slower for longer. A more appropriate name for this mode would just be “Bridled.” 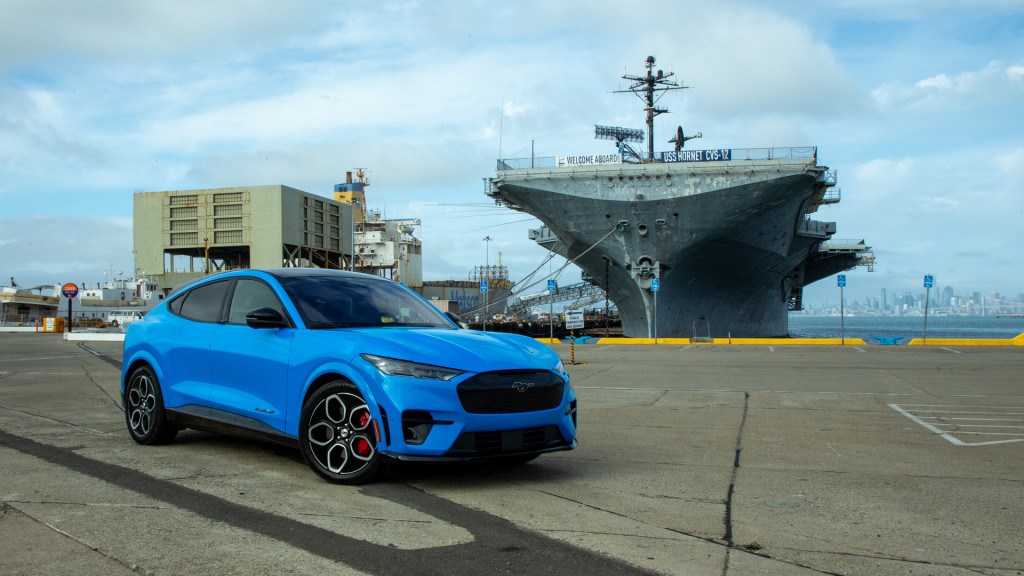 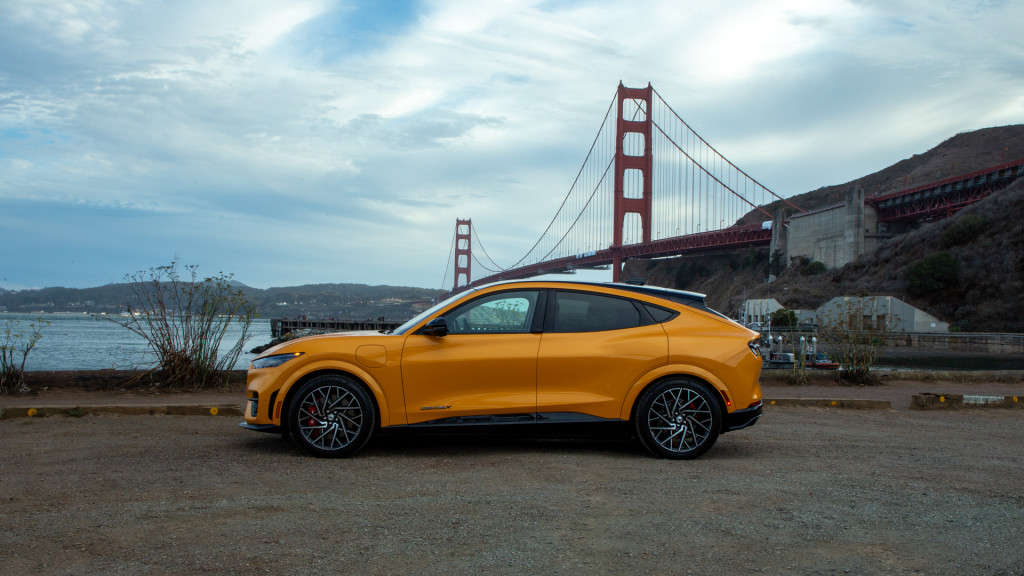 Credits where credit is due

The good news for those interested in the Mach-E GT, or any Mach-E for that matter, is that Ford estimates that it has enough full federal tax credits left to make it through 2022, even with the F-150 Lightning arriving as well next spring. That puts the effective price of a 2021 Mustang Mach-E GT Performance Edition at around $56,000 in most states.

It’s hard to say that the Mach-E GT lives up to the GT name, given that it’s so different from its predecessors. None of those vehicles offer this level of acceleration while at the same time being comfortable for more than two passengers with a practically sized cargo area. For Ford’s first stab at electric performance, this is satisfying, but there’s still room for growth and a stiffer suspension and more steering feedback would do wonders. Hopefully those additions are part of the rumored Shelby and Cobra versions Mach-E variants that are en route.