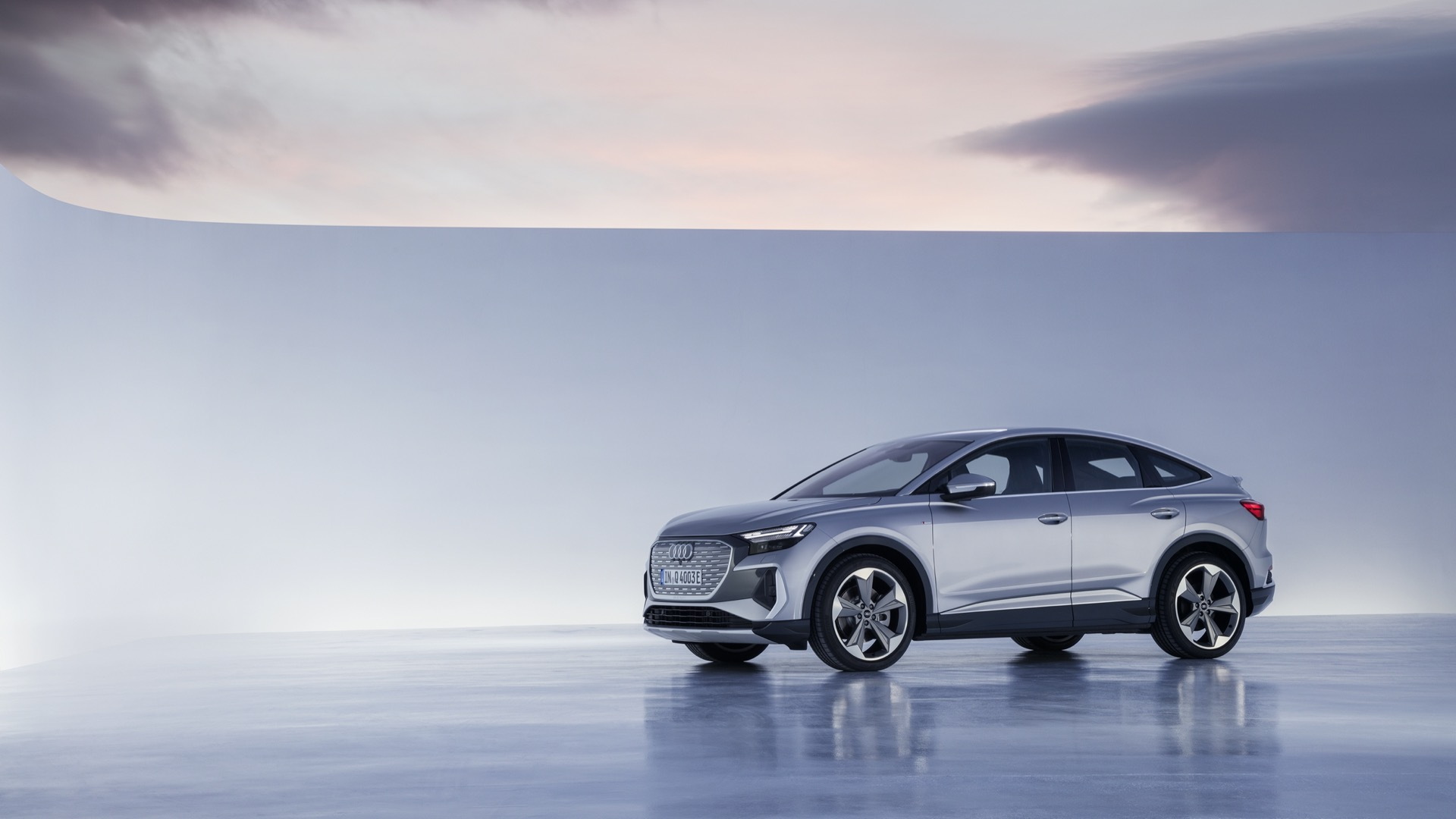 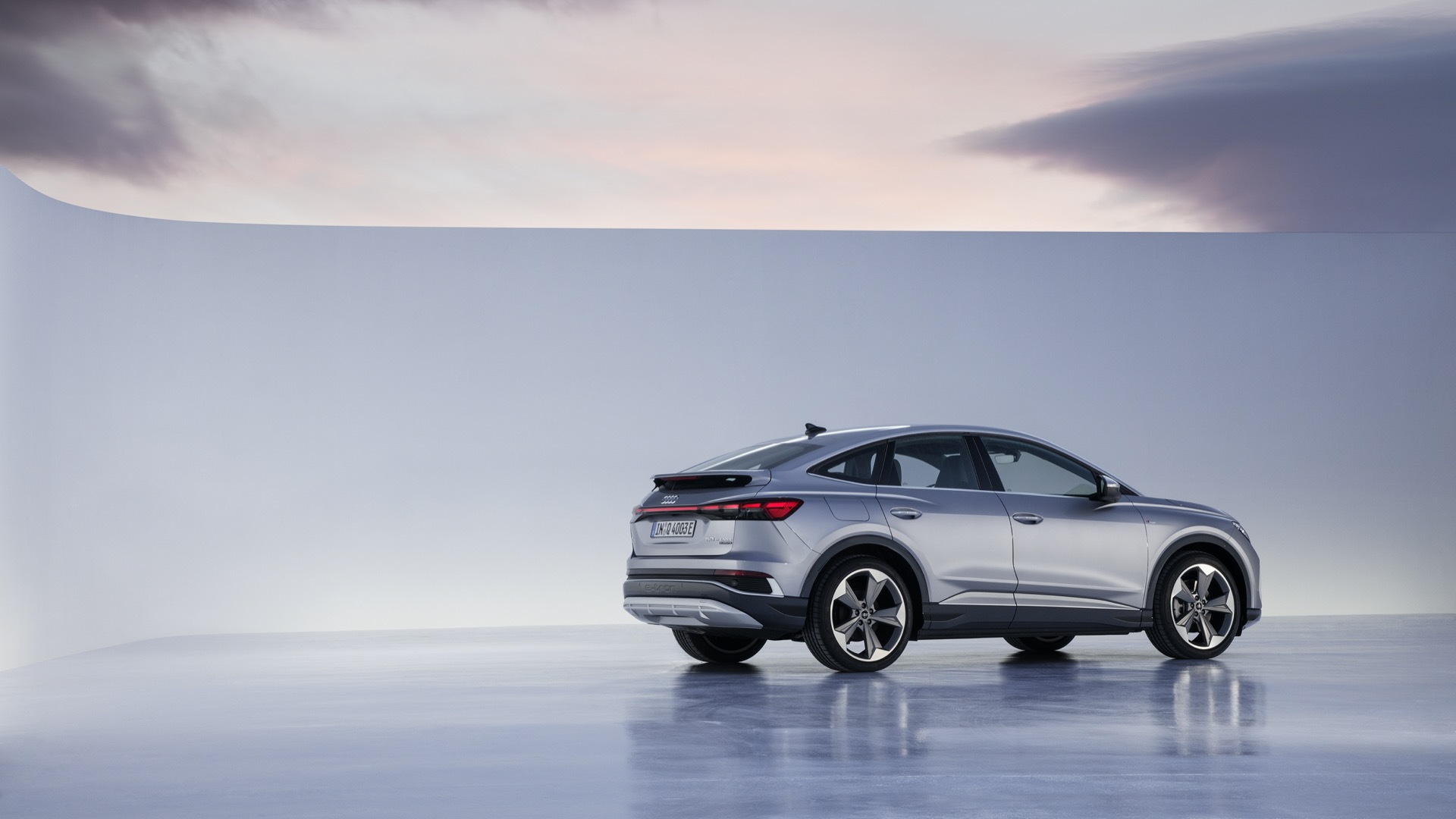 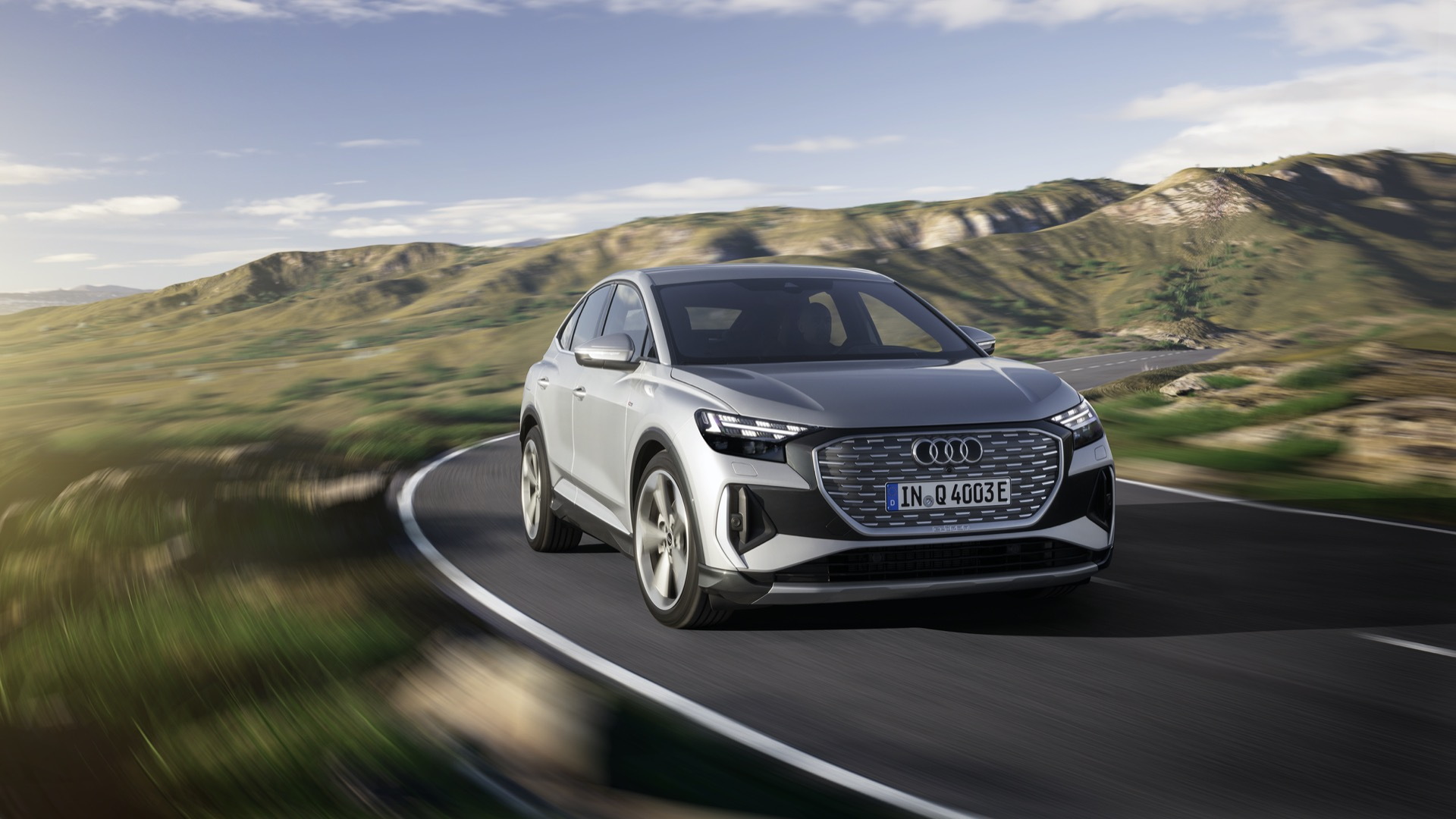 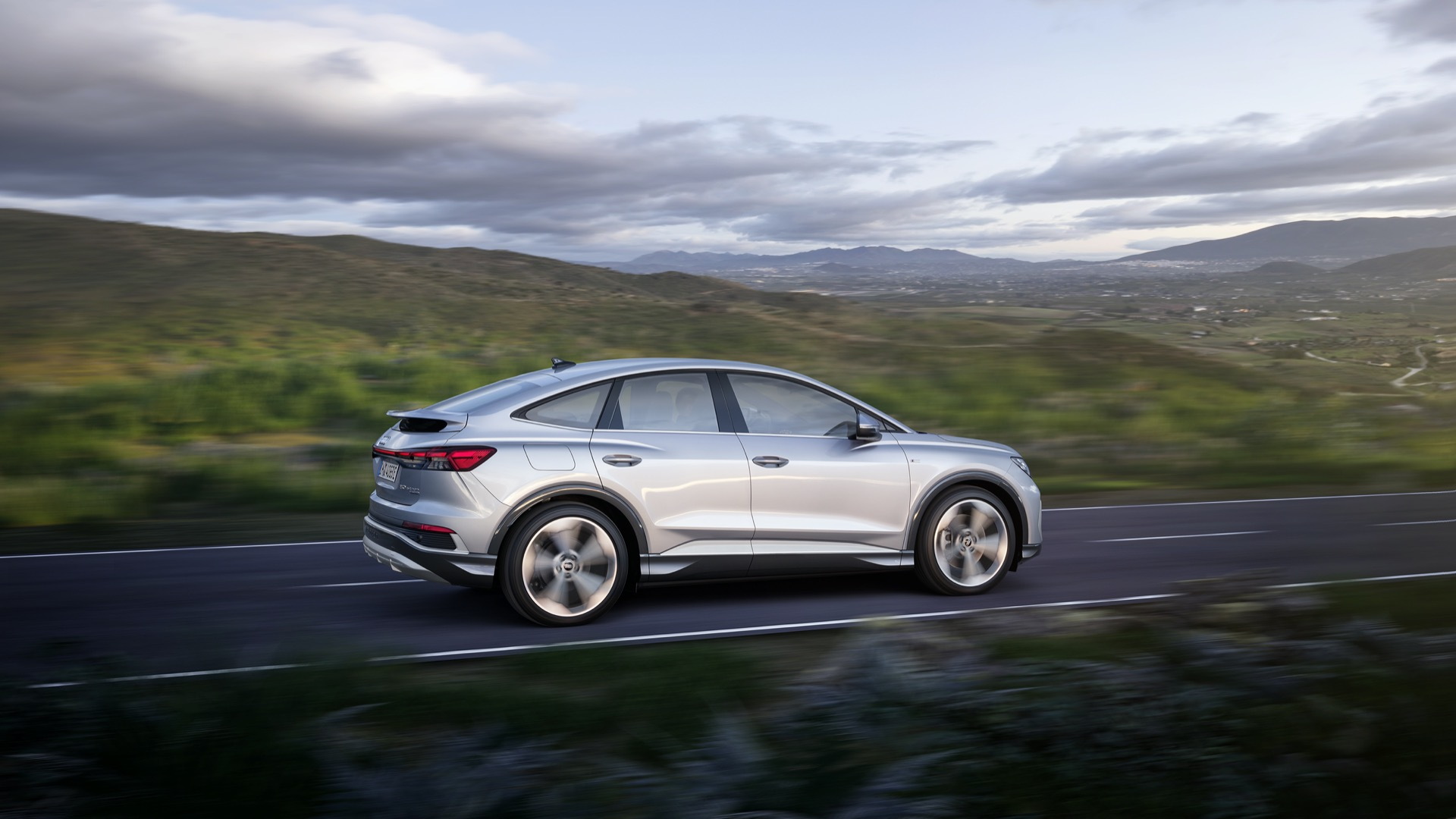 Audi has revealed pricing, equipment, and range information for U.S. versions of its all-electric overture for the masses, the Q4 E-Tron lineup due late this year.

The compact Audi EV will start at just $44,995, including the mandatory $1,095 destination charge. That's for the single-motor rear-wheel-drive version, badged the Q4 40 E-Tron. The Q4 50 E-Tron will get dual-motor all-wheel drive and start at $50,995, while the Q4 Sportback 50 E-Tron will get that same propulsion system with a racier Sportback profile.

It's neither Audi's quickest-accelerating nor fastest-charging, but the moves it makes on affordable electric luxury shape it up to be the German brand's most important EV yet. And it will offer Audi's longest range yet in an EV. Dual-motor Q4 50 E-Tron versions already have a range number from Audi—an estimated 241 miles on the EPA cycle, with city/high/combined ratings of 100/89/81 MPGe. It's still likely the Q4 40 E-Tron will land closer to 250 miles.

Audi has also confirmed output and performance figures for the three versions. The Q40 E-Tron will be rated at 201 horsepower and 229 lb-ft, while the Q4 50 models will be rated at 295 hp and 339 lb-ft—resulting in 0-60 mph acceleration times of 7.9 seconds and 5.8 seconds, respectively.

Due both in Q4 E-Tron and Q4 E-Tron Sportback versions—with more upright or rakish rear rooflines, respectively—the Q4 family is expected to arrive in the U.S. late this calendar year. Slightly smaller than the bestselling Q5 family—and expected to slot right in price-wise with Audi’s similar gasoline vehicles once you consider the $7,500 federal EV tax credit and other incentives—it’s likely the Q4 will be the brand’s top-selling EV once production ramps up.

The 2022 Q4 E-Tron models are Audi’s first vehicles built on Volkswagen’s MEB platform for affordable EVs—cousins to the Volkswagen ID.4. Specs for the U.S. version of the Q4 E-Tron aren’t yet confirmed, but in Europe it will be offered in three versions, ranging up to 295 hp for the dual-motor quattro model, featuring a 150-kw permanent-magnet motor in back and an 80-kw asynchronous motor in front.

At a maximum 125 kw, on 150-kw CCS DC fast-charging hardware, it can gain about 81 miles of range—again by WLTP standards—in 10 minutes. The battery pack, motors, and power electronics are cooled with two circuits, and the company says it’s designed for repeated DC fast charging. Models with the larger battery will charge a rapid rate for home AC charging as well—at up to 11 kw.

As revealed, the Q4 looks much like it did on the outside when shown as a concept—which it first teased in SUV form in March 2019 and in Sportback form in July 2020. The eight-corner Singleframe grille has inverted colors from Audi’s gasoline models to identify it as an EV, and steep front pillars transition smoothly up into the roofline. Audi notes that overall they have a “slightly softer and more flowing” design than in its gasoline models, and our eyes keep going to the chiseled body sculpting just over the front and rear wheels.

In production form, the Q4 E-Tron gets a drag coefficient of 0.28, while the more flowing Sportback is also aerodynamically sleeker at 0.26. Audi has achieved these numbers with adjustable cooling air inlets that use the lower grille for cooling only when necessary, plus a smooth-paneled underbody and wheel spoilers.

Bigger inside than outside

Expect the Q4 E-Tron to feel one size larger than indicated by its measurements, which are a city-friendly 180.7 inches long, 73.4 inches wide, and 63.5 inches high. A long 108.7-inch wheelbase, combined with the low, flat floor afforded by the dedicated EV platform, helps afford a longer cabin—six feet long, Audi says—than you’ll find in gasoline vehicles of the same overall length (the Ford Escape is within an inch).

Although you won’t find a frunk in the Q4 E-Tron, moving the climate control system entirely under the hood also helps clear away space in front, resulting in an especially spacious front-seat feel, based on the concept we’ve sat in. Rear seats are positioned 2.8 inches higher than in front, to help give everyone a sense of space, and Audi says that there are 0.9 cubic feet of storage compartments in the cabin. Audi also confirms that the Q4 offers cargo space that's comparable to that of the larger gasoline Q5, with 26.1 cubic feet for the Sportback and 24.8 for the SUV.

The Q4 lineup has a ground clearance of about 7.1 inches, which should make it well-suited for fresh winter snows, or for taking on a rutted road to the trailhead. On the flip side, an available sport suspension will lower the suspension by 0.6 inches, and an adjustable damper system is available. With an option package, buyers will be able to get the sport suspension plus progressive steering for a quicker ratio as the flat-bottom steering wheel is turned more. Audi Drive Select will provide different driving profiles that can fine-tune that, steering feel, and other attributes. Its turning circle is 33.5 feet.

Drivers can choose a ‘B’ mode for more regenerative braking, but there are also available shift paddles permitting up to 0.15g of regen when you lift off the accelerator. In the ‘Dynamic’ mode, the default regen is upped somewhat.

Taking center stage for the interface is something you won’t find on the ID.4: a head-up augmented reality display that will point out navigation directions or safety concerns by superimposing them with what the driver sees through the windshield. It puts static gauge displays in front of the driver at a closer field of focus (10 feet, versus 33 feet for dynamic assists).

The interface, thankfully, isn’t the same one that made its debut on the related Volkswagen ID.4 but one that was nurtured within Audi—even though it’s fundamentally similar in layout. The Q4 E-Tron will offer a version of its Virtual Cockpit instrument display ahead of the driver, plus 10.3-inch or 11.6-inch touchscreens at the middle of the dash, with a row of “buttons” just below, augmented by haptic feedback. There are haptic-feedback buttons on the steering wheel, as well as the opportunity for natural-language commands with the press of a button or just “Hey Audi.”

Audi has already teased the possibility of Nappa leather plus two different eco-fabrics—a faux suede or a fabric-plus-faux leather combo—and expect the materials and trims throughout the Q4 cabin to have the same kind of warm yet tech-forward look and feel that’s a hallmark of the larger E-Tron models.

The Q4 will offer a center airbag that unfolds from the right side of the driver’s seat. Audi plans to offer a whole suite of assist systems, including a predictive efficiency assist system that will help smooth out how much regen you use and when, as well as surround view cameras and an adaptive cruise system with steering assist.

The Q4 family will be made at Zwickau, Germany.

Audi has teased that a smaller electric sedan—perhaps a closely related A4 E-Tron—might round out the lineup of affordable Audi electric vehicles. As the automaker fills in its lineup with fully electric alternatives, expect more EV news from the brand again soon.