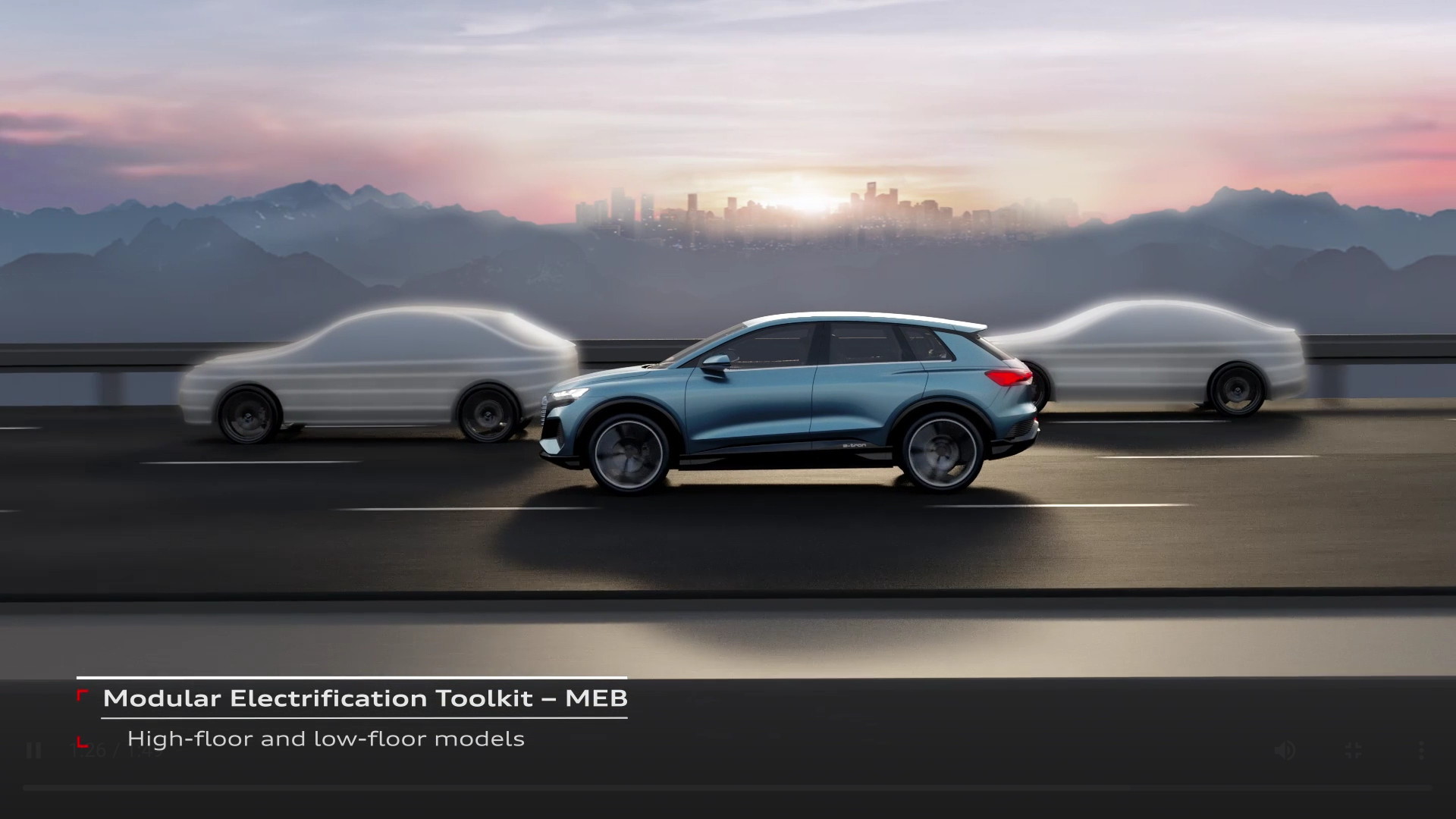 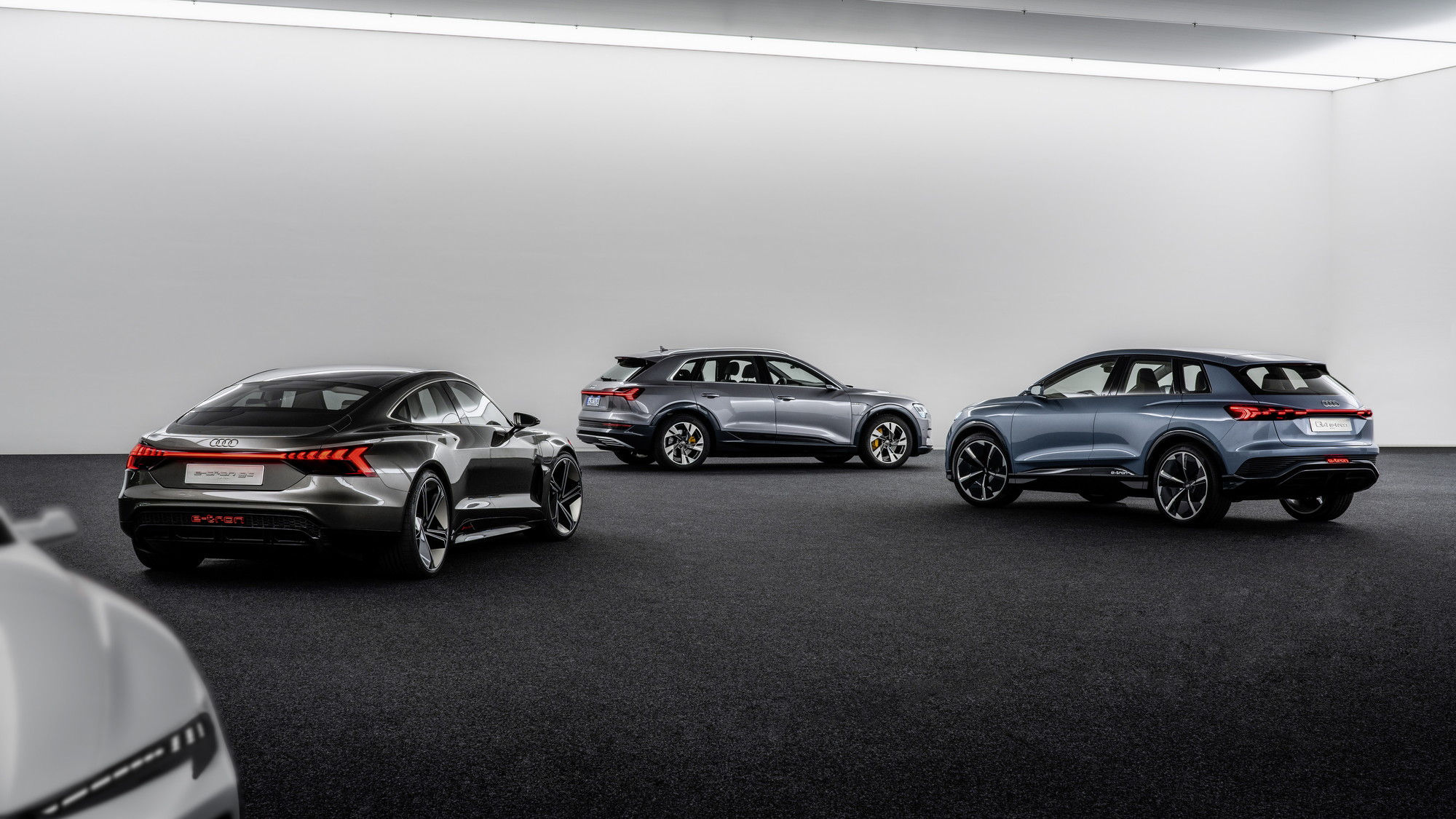 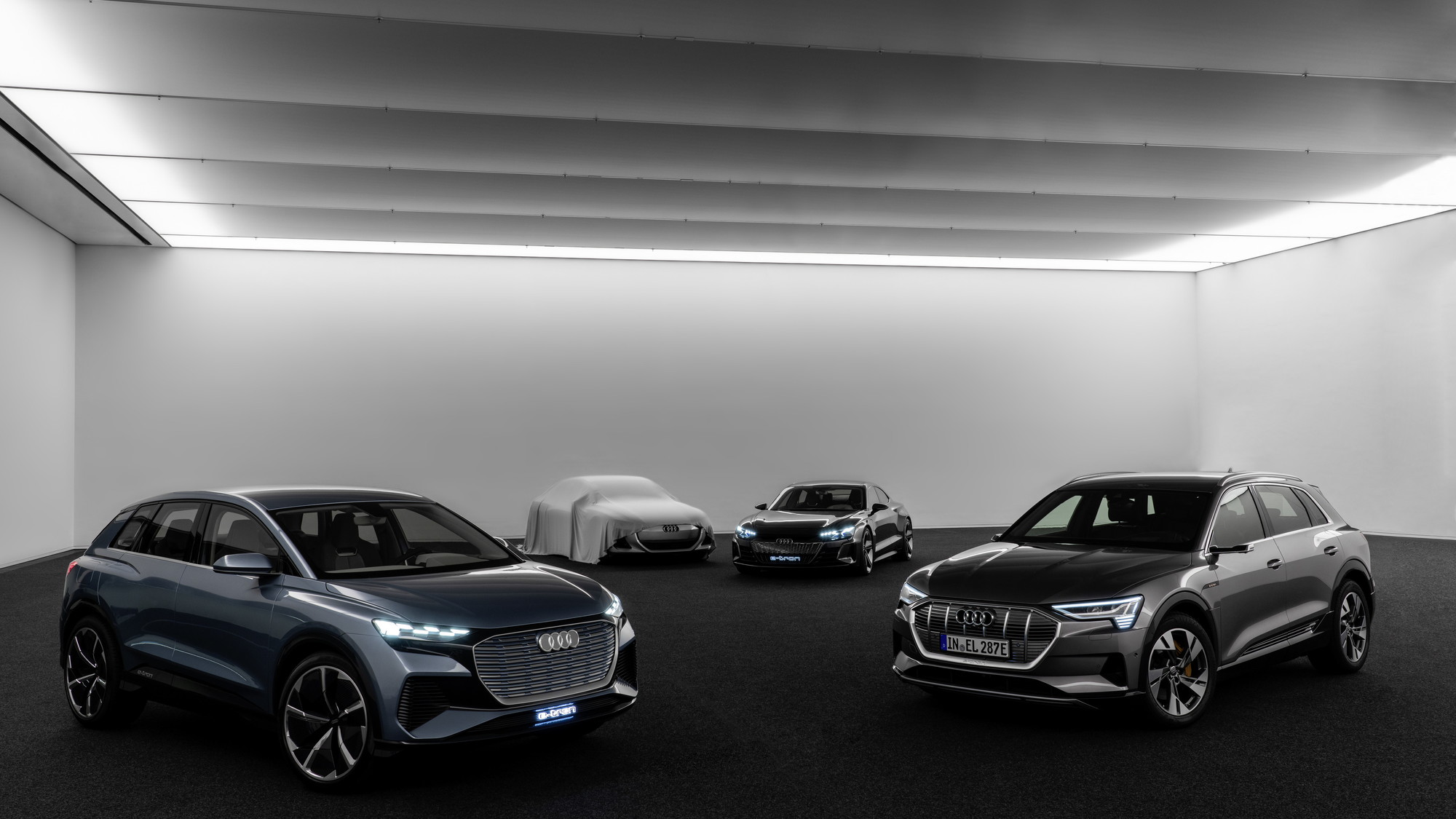 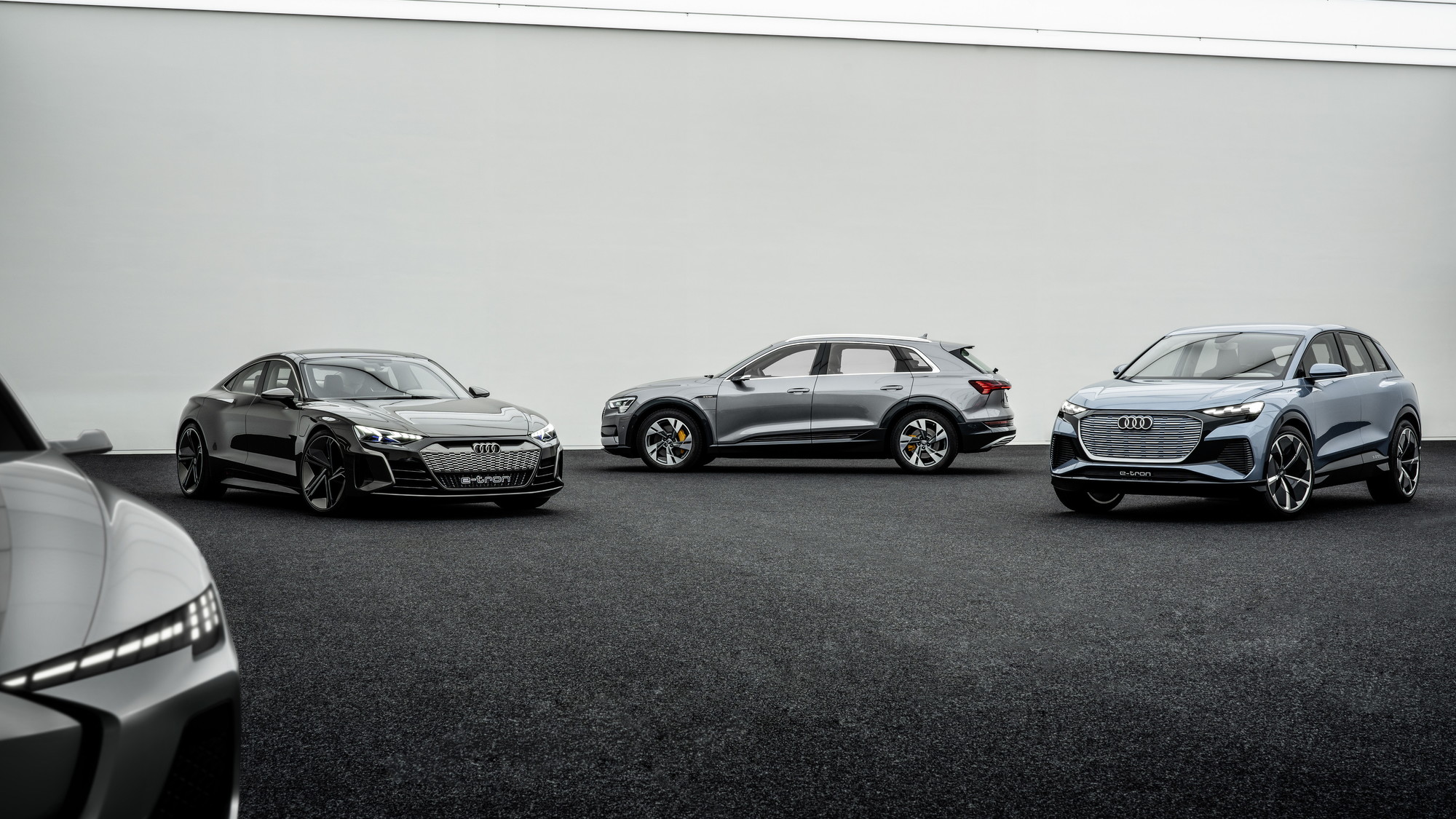 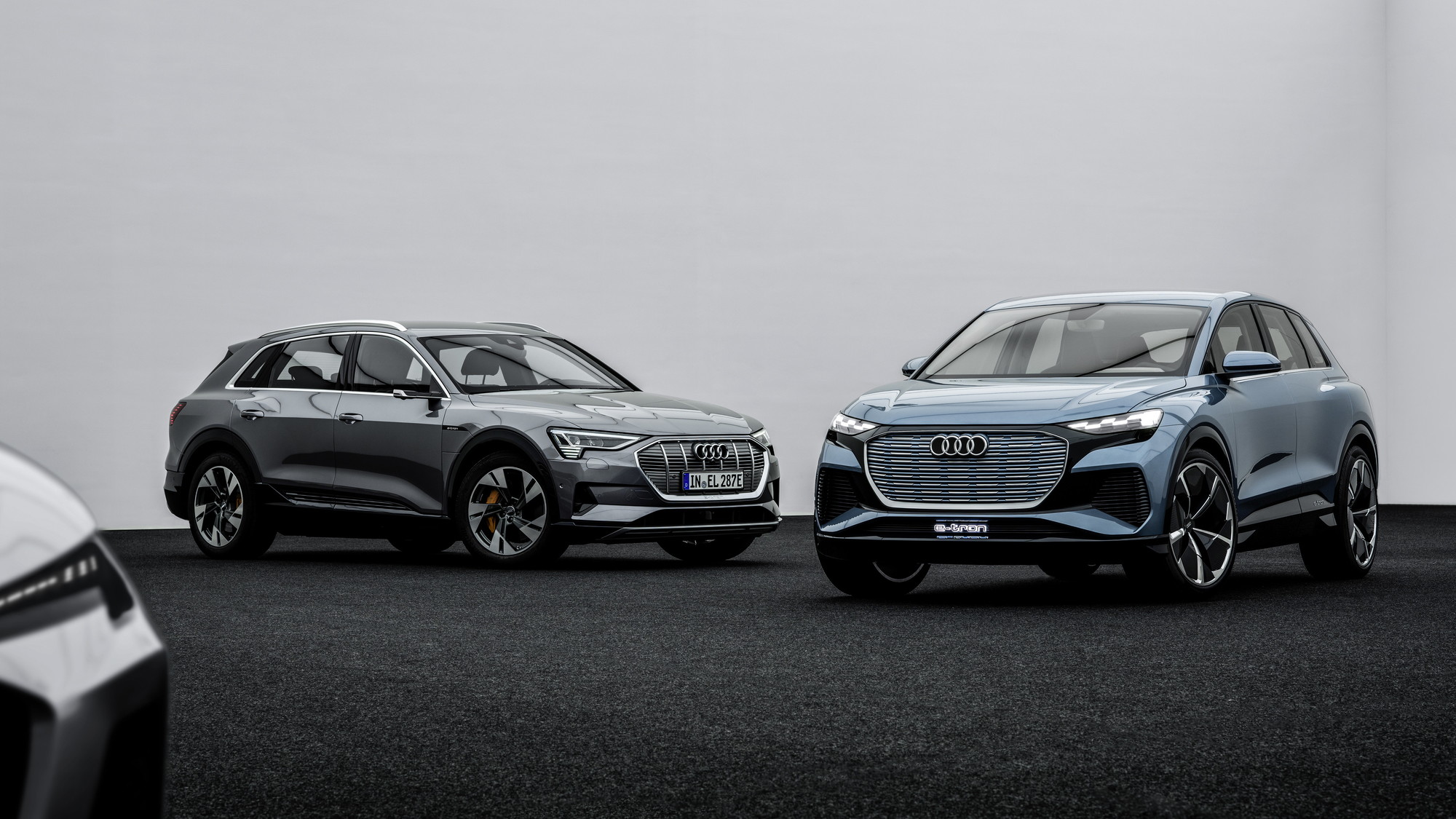 Audi this week has officially confirmed that its Q4 E-tron electric crossover will be built on Volkswagen’s modular mass-market electric vehicle platform, termed MEB, reaching the market in early 2021.

While that had been all but confirmed before, Audi wrapped into it a better picture of how Volkswagen's compact- to mid-size MEB platform will fit the brand. In addition to the Q4 E-tron, it already has two other MEB-based models in the works: a high-performance crossover variant, and a lower sedan, with the sedan taking advantage of the lower of the two battery heights that are available.

All three models are likely to be close—if not slightly smaller—in overall dimensions to the upcoming Tesla Model Y crossover and to the related Model 3 sedan, which is currently the sales leader in the battery-electric arena.

Audi made these new points as part of a series of presentations to the press, regarding the company’s strategy for electromobility and sustainability. Officials said that the Q4 E-tron, like the concept of the same name, will use the MEB toolkit carried almost identically from VW vehicles.

The brand confirmed that means that there will be a choice between rear-wheel drive and all-wheel drive, with a permanent-magnet motor at the rear-wheels in all versions, supplemented by an AC synchronous motor in front (providing all-wheel drive) in some versions. Audi wouldn’t confirm battery specs, but we expect the Q4 E-tron to feature the same 58-kwh and 77-kwh packs (usable capacity); and the brand did confirm the same maximum 125-kw DC fast-charging power.

On Volkswagen’s models a heat-pump system (potentially helping with range and efficiency during longer trips in chilly weather) is available, but with Audi offering such a system in all of its new plug-in hybrid models it’s likely to be standard in the Q4 E-tron.

Audi sees a future revolving primarily around two volume platforms for internal-combustion vehicles (including plug-in hybrids) and two platforms for electric vehicles. Just as the MQB and MLB platforms are used in Audi models, MEB and PPE—the upcoming premium platform—will be the basis for 20 different Audi all-electric models globally by 2025.

It presented the Q4 E-tron, which will be closely related to the Volkswagen ID 4 that the U.S. will first see from VW, as Q3-sized on the outside but Q5-sized inside. After sitting in the Q4 as well as both of the gasoline models within a day of each other, we can stand behind that impression.

Audi also confirmed that the Q4 E-tron will be built only in Zwickau, Germany—at a plant that’s undergoing a transformation to become “Europe’s most efficient e-car factory,” aiming within a few years to produce 330,000 vehicles annually there alone, including six electric-vehicle models from three brands.

The Q4 E-tron will be Audi's third fully electric model. Led by the E-tron SUV, which went on earlier this year, the lineup will be fortified with the introduction of the E-tron GT super-sport sedan—closely related to the Porsche Taycan—in 2020.

To facilitate this report, Green Car Reports accepted special access, transportation, and lodging from the manufacturer.