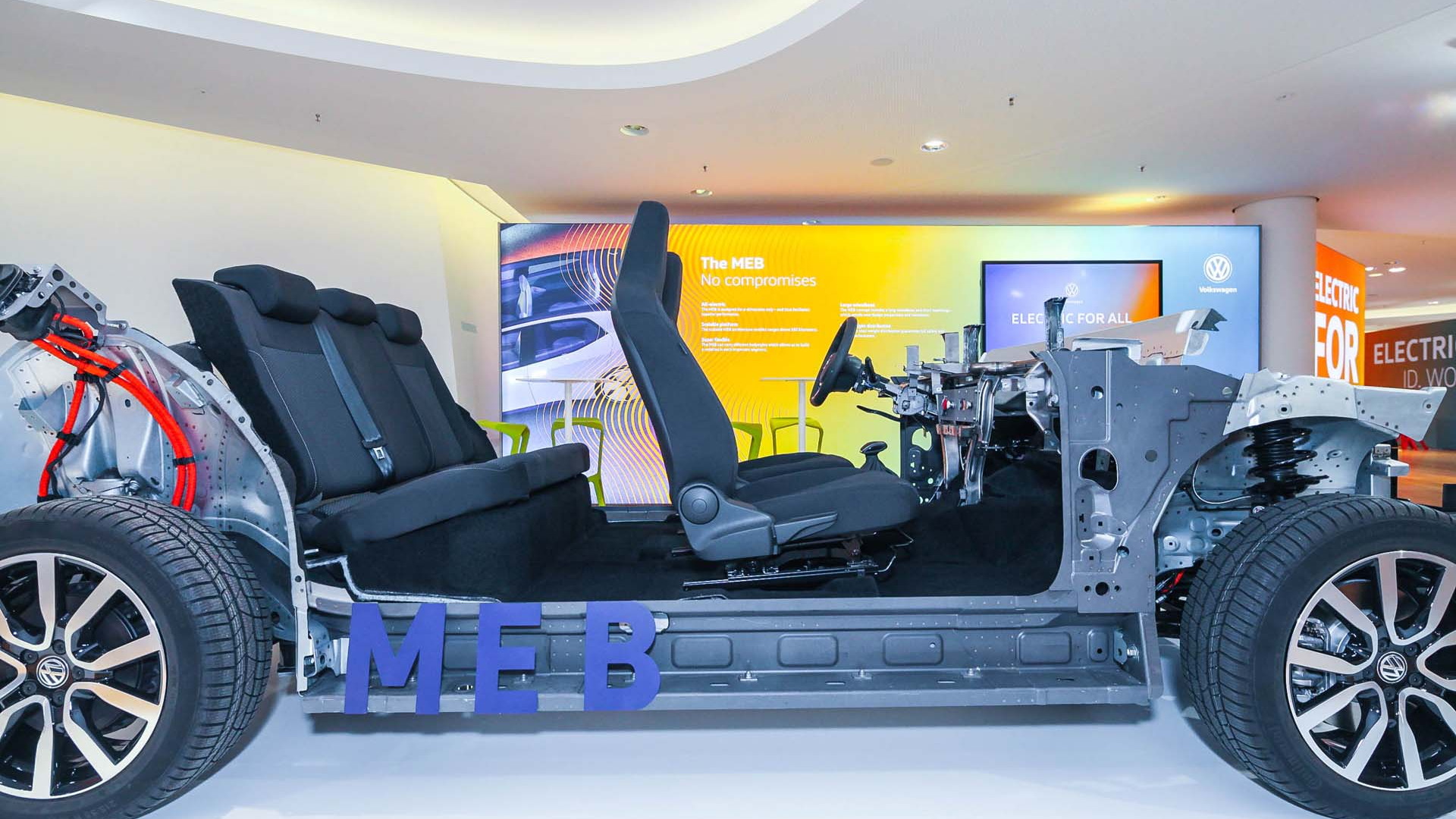 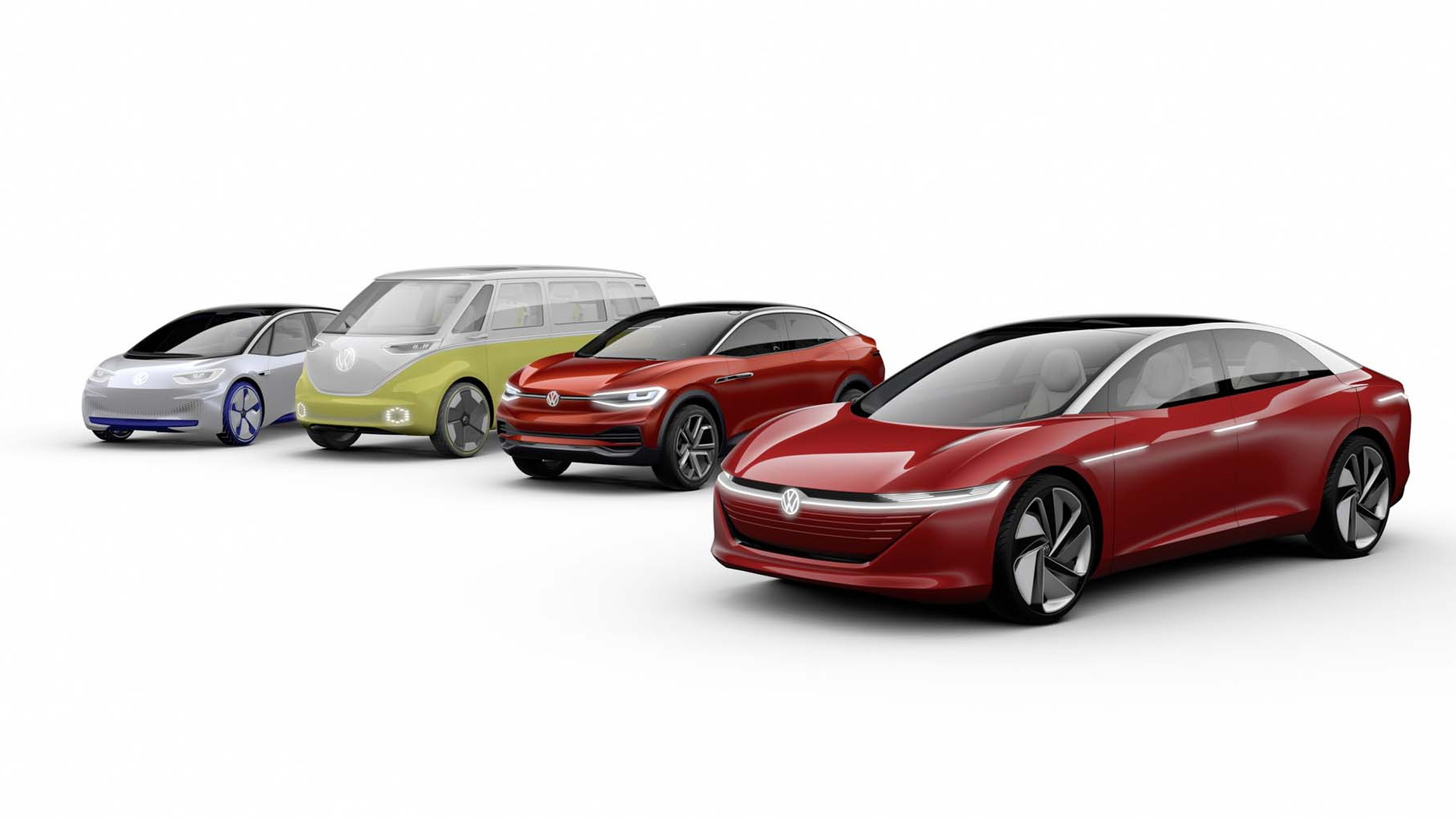 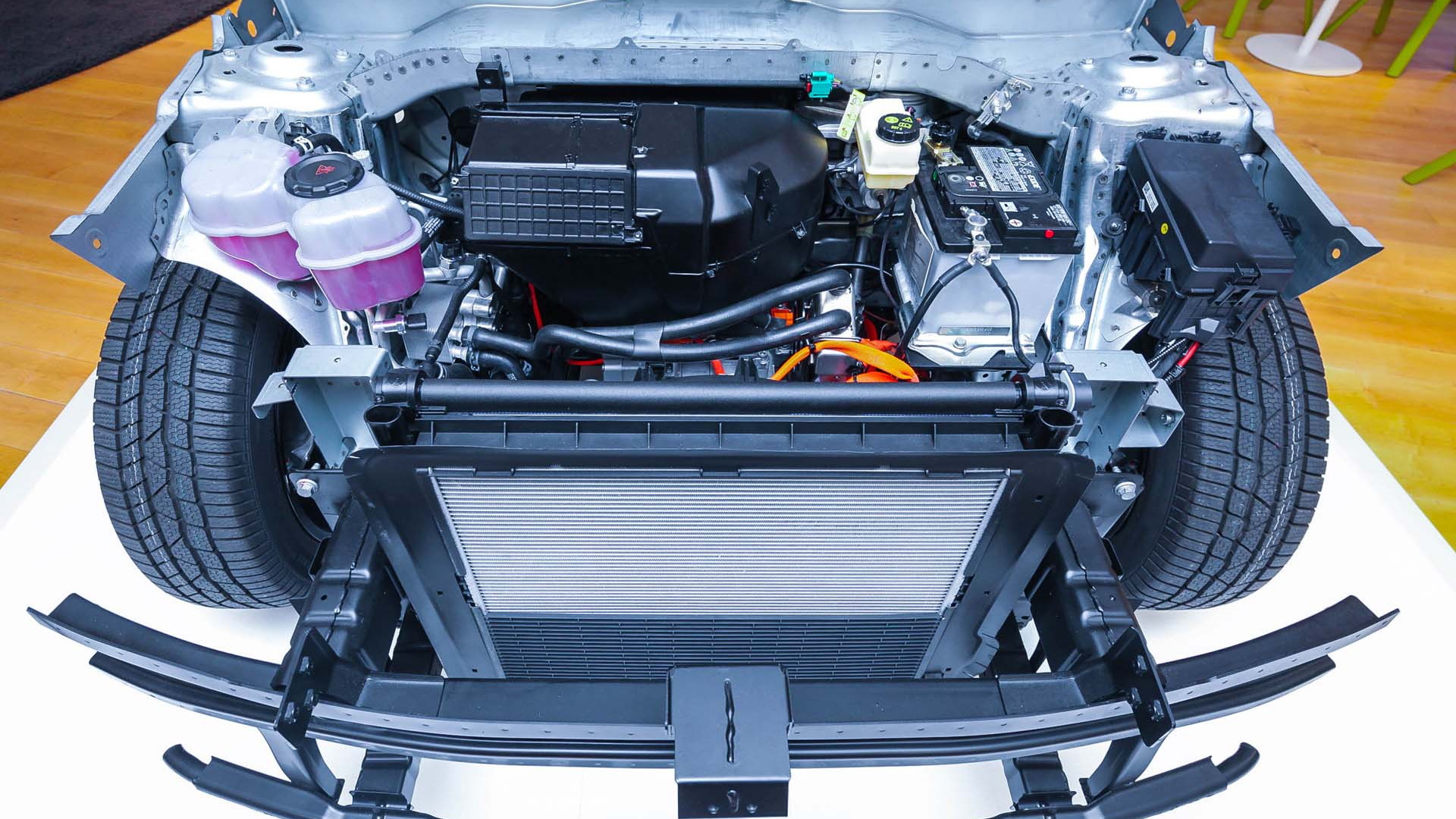 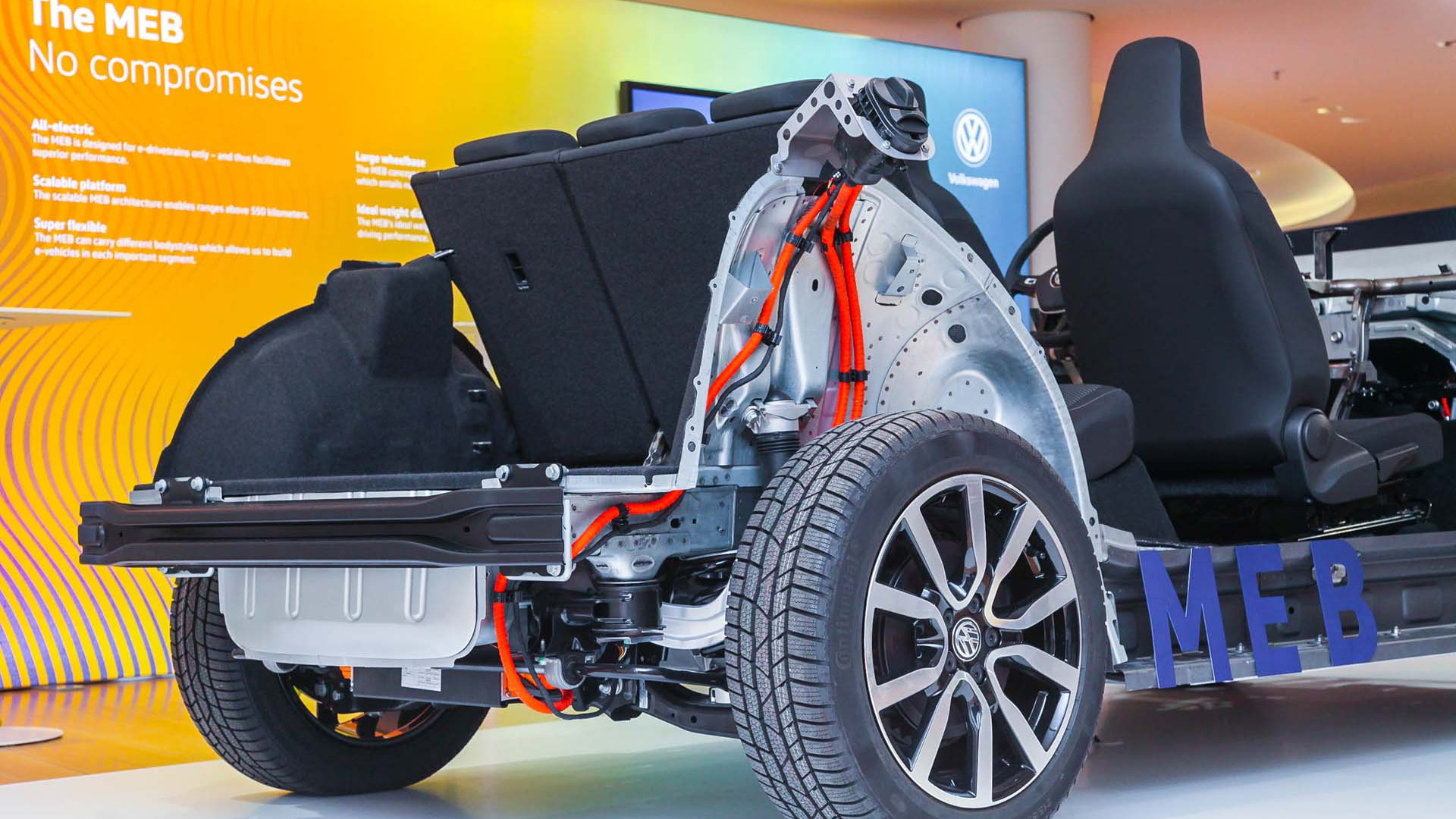 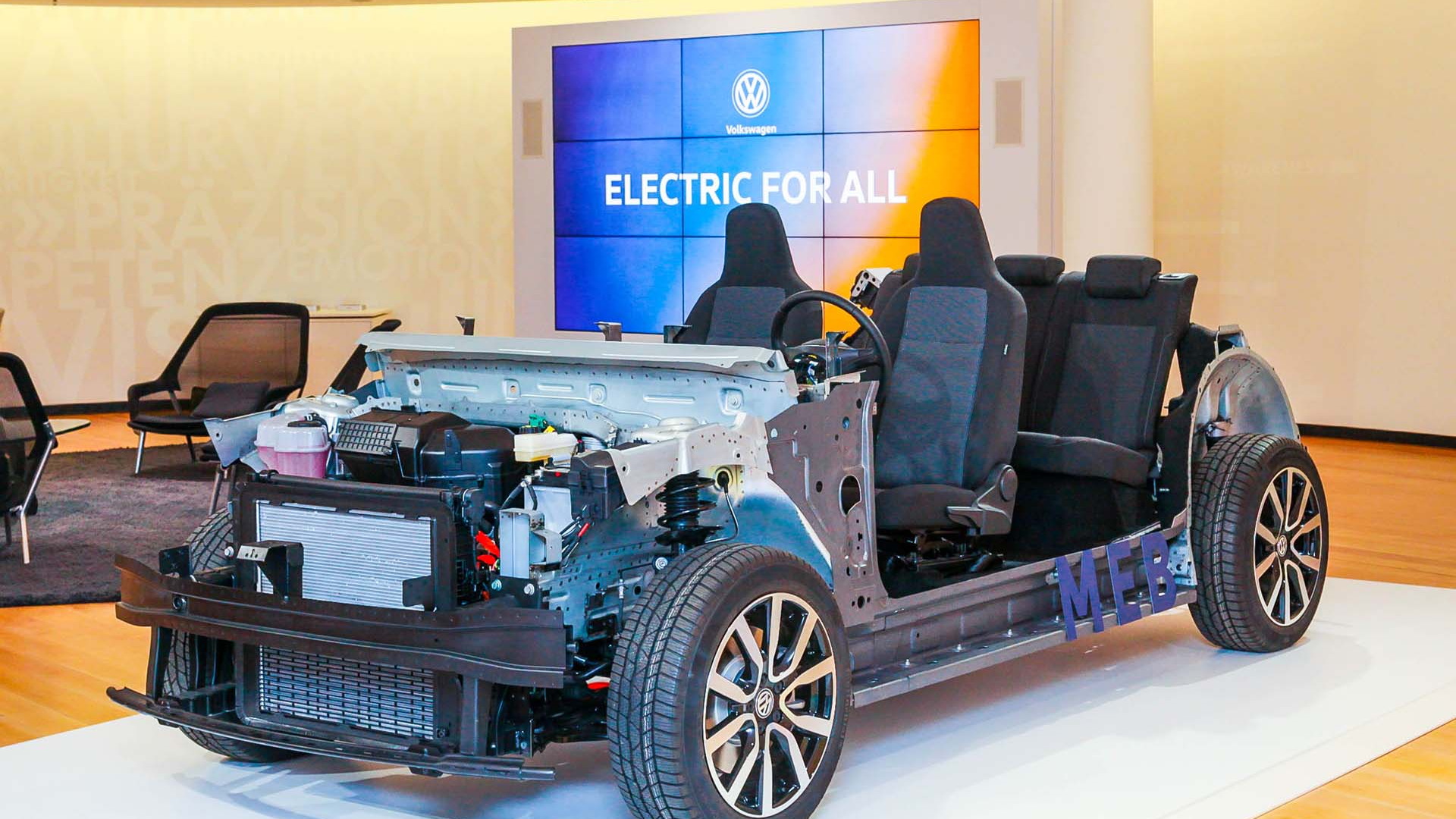 Volkswagen last week laid out the basics for its set of electric-car components that plans to use to underpin a million new all-electric vehicles each year by 2025.

With those components on the Modular Electric Toolkit (MEB), VW claims that it has the first pure-EV platform designed for high-volume production.

It’s a claim that may be contested. The Nissan Leaf probably comes the closest; it was certainly designed for high volume, but its platform was adapted from other Nissan compact cars. And at this point, many in the industry might argue with Tesla’s earlier assertions that the Model 3 was designed for easy high-volume production.

READ NEXT: Will Volkswagen's electric Microbus be made in the USA?

That said, in everything from the supply chain to manufacturing processes, VW’s plans are the most comprehensive of any automaker yet and represent a mammoth commitment to revamping how vehicles are built and how the company conceives vehicles. In Dresden, Germany, last week, Thomas Ulbrich, the member of the Volkswagen Group board of management for e-mobility, likened the change to the period when VW transitioned from the original air-cooled, rear-wheel-drive Beetle to the water-cooled, front-wheel-drive Golf.

Volkswagen walked us through the basics and teased a few tech details. Here are some of the fundamentals that will distinguish these models, from the ID hatchback to the ID Crozz crossover, the ID Buzz microbus throwback, and many more:

No more battery than you need. Volkswagen is aiming for affordability, so it doesn’t want to pack every model with the maximum range. The automaker referred to base battery packs of, tentatively, 48 kwh and 62 kwh and said that we should expect a range of 175 to 300 miles in the Worldwide Harmonized Light Vehicle Test Procedure (WLTP). Although there’s no lock-step conversion to EPA range—they’re different driving cycles—that likely means a range comparable to the current Nissan Leaf’s 151 miles, up to (or perhaps better than) the 258 miles of rated range for the 2019 Hyundai Kona Electric. It’s likely that doesn’t include the extended 82-kwh pack that could arrive a bit later or be limited to a few flagship models.

Two different kinds of motors. Every MEB vehicle will have a DC permanent-magnet synchronous motor, mounted within a modular rear axle assembly, and chosen for its combination of performance and cost-effectiveness. But dual-motor models with all-wheel drive will have what officials confirmed is the same motor design as what goes into the Audi e-tron—a current-excited asynchronous motor that VW’s sibling luxury brand chose because of its strong recuperation (brake regen) potential and lack of rare-earth elements.

Two gear ratios. It’s almost certain there will be multiple power levels offered across these different electric models. But to accommodate performance versions there will be two different reduction ratios used for the rear motor.

Liquid cooling. Component cooling and heating will be split into two circuits: a high-temperature one for the motors, and a lower-temp one for the battery and power electronics. All models will have resistive heating for the cabin, while a heat-pump system will be available and could help heat or cool components.

Fast charging at up to 125 kw. Models will launch with at least 100 kw DC fast charging. The MEB vehicles will include an onboard charger capable of charging at 11 kw; VW is also planning to employ what it called “reserve inductive charging.” And they’re being developed with a bi-directional system that could allow them to be supplemental power sources—in a natural disaster, for example.

Performance TBA. VW is extremely vague about the performance of the MEB vehicles. For instance, in a release it points out that the ID prototype can get to 62 mph in less than eight seconds, with a top speed of 99 mph. But then it says: “Electric drive motors offering either more or less power may be considered for the 2020 series version.” One thing we will see, officials confirmed, is an approach that offers multiple performance levels.

Over-the-air updates. The MEB models ride on a completely new end-to-end architecture, called E3, and may be the first in the VW Group to get over-the-air updates that can tweak performance traits. Upgrades via the cloud will affect both “performance and technical desirability” through the vehicle’s life cycle, according to VW. Three new core processors are also part of the platform. Called ICAS1, ICAS2, and ICAS3, these are dedicated to vehicle sensors, HMI, and safety systems, respectively.

Familiar exterior sizes, more interior space. Compared to existing platforms that accommodate internal combustion engines, VW says that MEB offers more passenger space and a somewhat higher seating position, with less front and rear overhang, no drive tunnels, and more space for passengers and cargo. The MQB platform, which underpins everything from the Golf to the Tiguan, was used as a starting point, and many of the critical dimensions aren’t far off—yet Volkswagen has carried over next to nothing.

Lots of flexibility. Within the platform the wheelbase can be varied as desired, and there can be two cowl lengths (dash to front axle) plus two track widths. The wheelbase won’t be necessarily tied to battery capacity, which would leave open the possibility to less expensive versions of the larger vehicles, like ID Buzz; or loaded, long-distance-capable versions of the I.D. hatchback, for instance.

Vestiges of the past, hints to the future. There is one carryover item from the 20th century that MEB models will have: a lead-acid 12-volt battery, mounted in front, under the hood. And we see a very conventional dash taking form—although there is an allowance, in a generous cowl area, for a future that includes the gear for VR interfaces and autonomous driving modes.

Neither the Leaf nor the Model 3 has been entirely successful in its mass-market mission; the Leaf in sheer sales and demand, the Model 3 in meeting its production-and-delivery targets. If Volkswagen can pull off both creating electric vehicles the masses want and being able to produce them smoothly—in volume—then this company’s path to redemption could pay off.