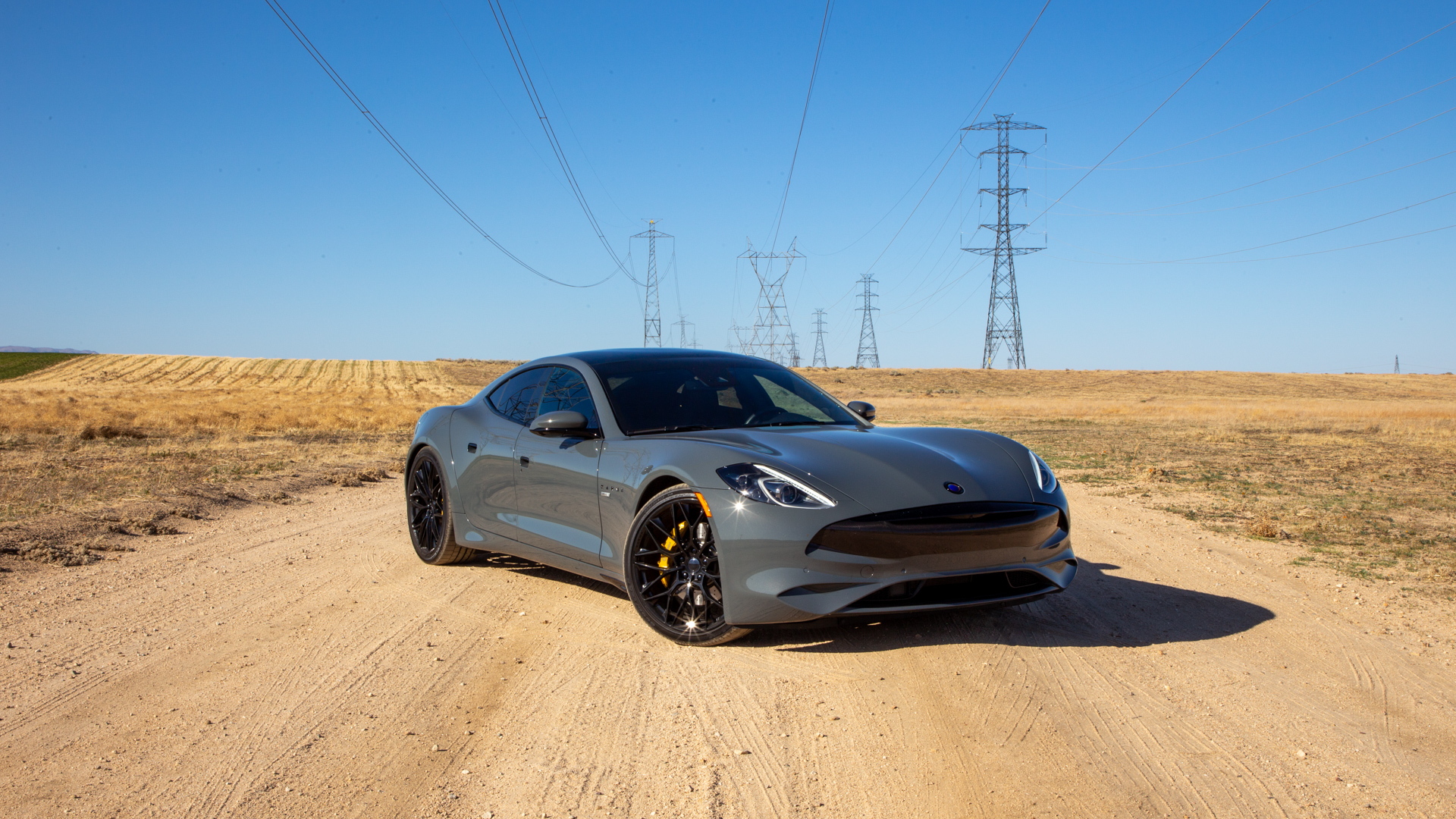 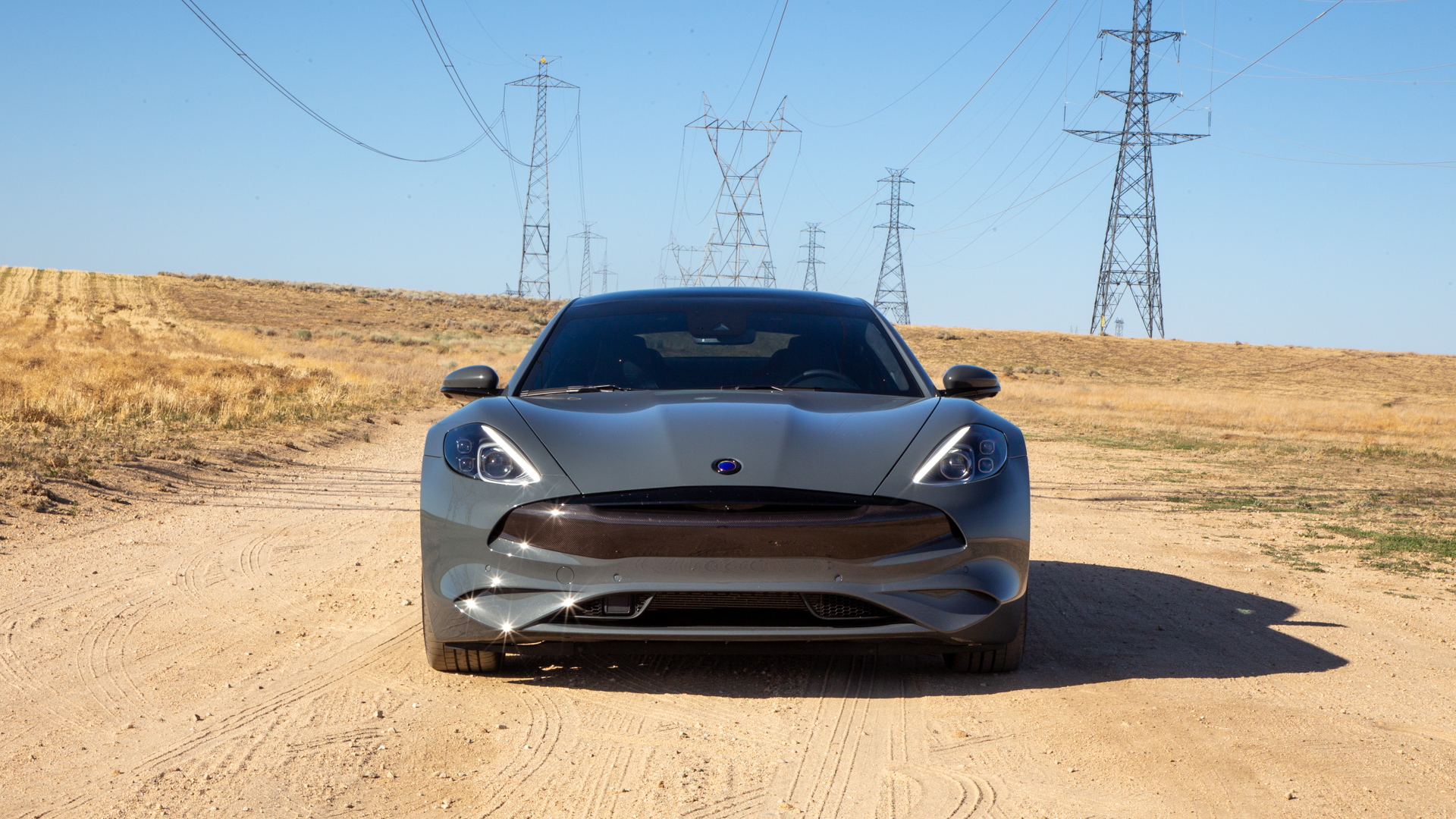 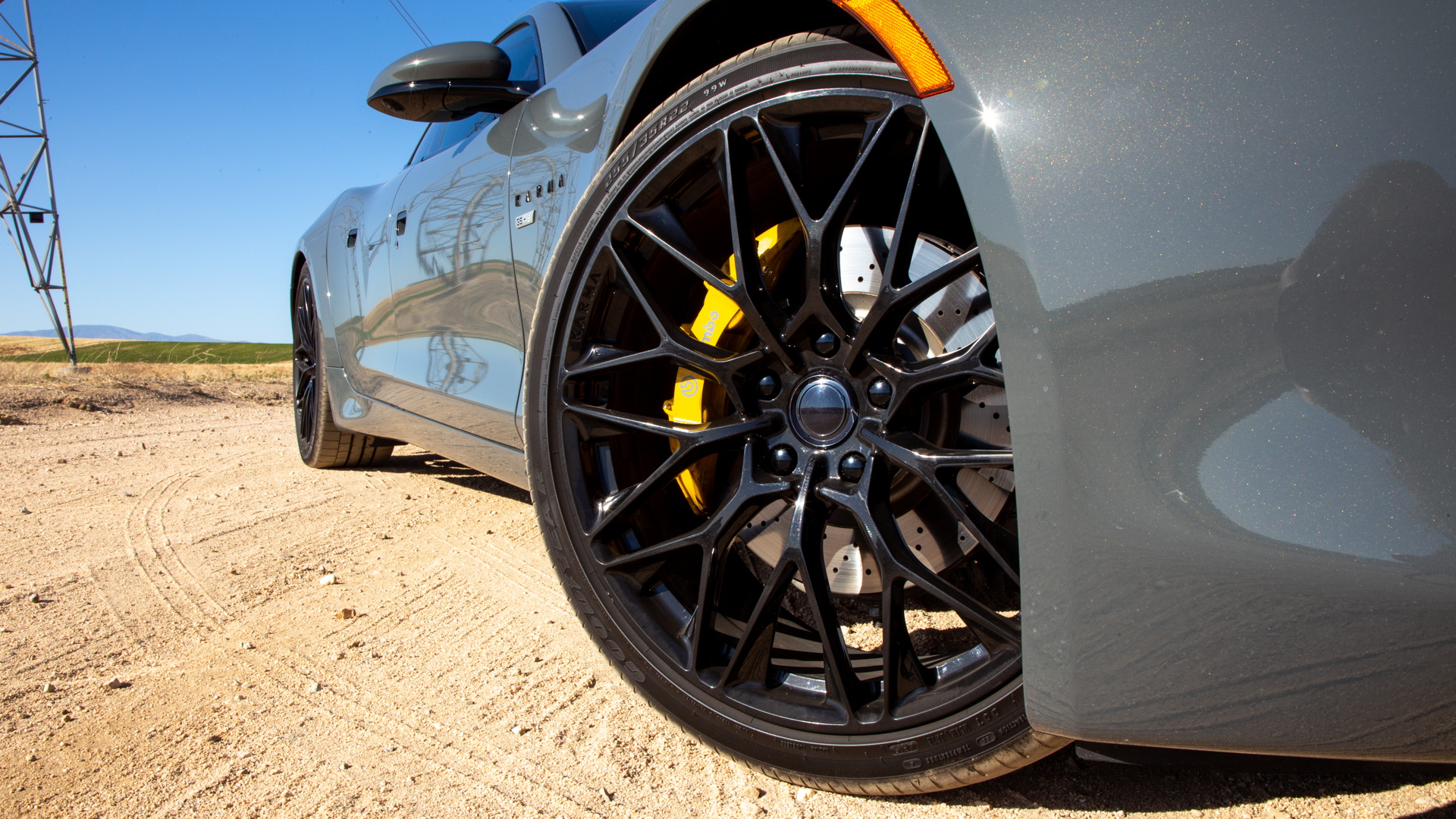 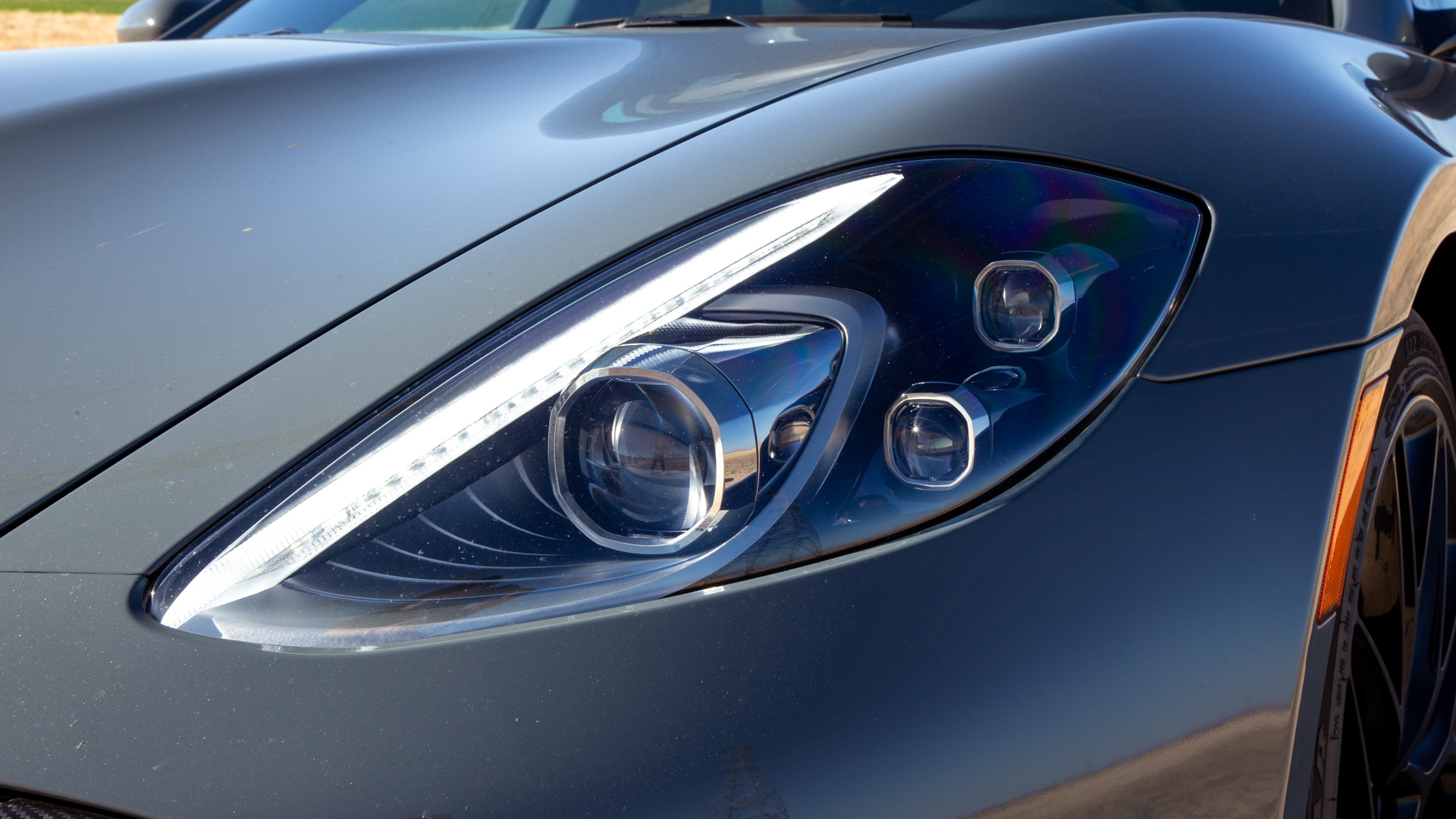 It’s been a long and winding road for Karma Automotive, which was born of the remains of Fisker more than five years ago and still hasn't managed to make as many cars as the original. But with the debut of the 2021 Karma GS-6, following in the footsteps of the Revero GT it introduced last year, Karma sets the stage for that to change rapidly.

The GS-6 is less of a new vehicle functionally than a replacement for the Revero GT, with that nameplate being pushed upwards onto a more expensive forthcoming model. If the GS-6 looks familiar, that’s because it uses the exact same body panels as the Revero GT and you’ll have to rely on a pair of small badges to tell them apart.

It now serves as the entry point into Karma’s growing lineup, at least until the all-electric GSe-6 debuts later this year.

Walking up to the 2021 Karma GS-6, I feel as though I’m being tricked. It’s not just the Revero GT that the car shares a resemblance with, it still clearly has oodles of Fisker Karma DNA flowing through its veins. A decade-old car design should not feel so new, but it still feels fresh somehow, even though the series-hybrid technology that drives the car is no longer novel.

Powertrain details have changed slightly from the Fisker days, the range extender is sourced from BMW now and the 1.5-liter turbocharged inline-3 makes 228 hp and functions solely as a 170-kw generator for the 28-kwh battery pack. One Fisker trait remains, however: you can still feel the engine rumble through the seat at idle when the car is at a stop, like one of those vibrating massage chairs at a low setting.

One of few PHEVs with fast-charging

Charging speeds to fill the battery from 5% to 95% are estimated at 4 hours on a Level 2 charger, or 34 minutes on a DC fast charger.

Driving the rear wheels is a 400-kw, two-motor propulsion system that outputs 536 hp and 550 lb-ft of torque. This is enough power to hustle the GS-6 from 0-60 mph in 4.5 seconds for most models, or 3.9 seconds with the performance package. These are pretty good times for a car that pushes the scales at around 5,000 pounds, but puts it far behind the quickest electric vehicles on the market today.

Paddle shifters behind the wheel are used to toggle through the GS-6’s three drive modes (Stealth, Sustain, and Sport) on the left, while the right paddle toggles through three regenerative braking settings. There is no one-pedal driving system to be found here, even in its most aggressive setting the GS-6 seems to stop slowing down at around 10 mph leaving the last bit of braking to the driver. It’s an easy system to adapt to and drive smoothly; it only took me about 15 minutes to get the hang of it.

The GS-6’s calling is as a touring car, it’s comfortable and quiet, happily chomping its way through highway miles without a care in the world. But that doesn’t make it a slouch on windy roads, toss the GS-6 into Sport mode (which keeps the generator running to provide maximum power) and it offers up an impressive amount of throttle responsiveness and handling acumen.

For a long and heavy car, the GS-6 feels remarkably agile. Turns out that pushing the wheels way out towards the ends of the car and concentrating the weight towards the car’s middle where the battery pack is placed is a good combination. Toss in a sticky set of offset Goodyear Eagle F1 tires wrapped around massive 22-inch wheels, and the GS-6 is a rather capable canyon car with good steering feedback and surprisingly sharp turn-in. Another surprise: those large wheels with thin tires didn’t seem to negatively affect ride quality, which was a highlight of the GS-6.

That wheel/tire combination however does come with a big caveat: less range. There is a large difference in estimated efficiency for the GS-6 depending on the size of the wheels. The standard 21-inch wheels have an estimated 61-miles of electric range and an EPA estimated 26 mpg combined. Opt for the available 22-inch wheels (as my test vehicle had) and those figures get whittled down to 54 miles of electric range and 22 mpg combined. The reason for this is not just due to the wheel size, says Karma, but those softer, grippier tires.

I put those EPA estimated figures to the test in a few ways, testing out both its electric range and how efficient it runs in “Sustain” mode, which uses the generator to keep the battery level constant which means ostensibly that the generator is providing the electricity to move the vehicle.

We will include the GS-6’s trip computer’s range estimates in our data but take them with a grain of salt. The computer is a big-time optimist, unlike other trip computers, which take into account driving style, climate usage, and sometimes even the route ahead to spit out a range calculation to the driver. But the GS-6 just tells you how much range you would get under ideal conditions, which can be misleading. The vast majority of the miles in these tests took place on the highway, at speeds of roughly 65-70 mph, and with the GS-6 at the most aggressive of its regenerative braking settings.

At the beginning of the Sustain test, the computer estimated 210 miles of range remaining for the engine side, and after a trip of 102.5 miles on the highway, that estimate had whittled all the way down to 74.3 miles (a 135.7 mile decrease). Over that period, the GS-6 consumed 4.9 gallons of gas, which comes out to 20.9 mpg, which trails the EPA estimated figure of 22 combined mpg slightly. To be fair to the GS-6, series hybrids are notoriously inefficient on the highway so this result was to be expected somewhat, but be prepared for that estimated gasoline mileage figure to disappear rapidly.

My second test was run in “Stealth” mode, the drive mode which runs the car solely on battery power. At the start of this test, the computer’s estimated battery range was 49.9 miles at 66% charge. After running the battery all the way down to empty, I had covered 42.2 miles and consumed 18.0 kWh of energy, giving the GS-6 a 2.3 mi/kWh ratio.

This falls far behind most other EVs that we’ve covered. A Nissan Leaf Plus I also tested recently posted a 3.7 mi/kWh ratio over 100 similar highway miles.

I was happy to find that the interior is very well put together, and the exterior panels had no egregious gaps or overlap. Materials are quite good on the inside, though for such a long car, the GS-6’s backseat accommodations are surprisingly cramped. With the driver’s seat positioned how I like to drive (I’m 5’11), I had some trouble squeezing into the backseat and barely had room for my knees behind the front seat. Headroom, as the curvaceous profile would suggest, was also tight.

Karma developed the entire multimedia system in-house and it can be updated over the air. There is no native navigation, Android Auto and Apple CarPlay are intended to take care of that. Google Maps or Apple Maps are superior to all but a few of these native systems anyway. The system works quickly, though it has some strange quirks. For example, the button to go back from different screens and menus isn’t always in the same place.

The system does offer you a good amount of information that shows how much battery vs. gasoline driving was done, a plethora of performance gauges (40 to 50 in all), and places what you need to know regularly in the all-digital instrument panel for easy access from behind the wheel.

The only part that felt clumsy to me were the touch sensitive buttons on the steering wheel, they aren’t entirely accurate. Whenever I tried to turn the volume down I’d end up muting the entire system and then trying to hit a millimeter or two in a different spot to get the volume at the appropriate level.

Karma is also offering a unique program to its buyers: the chance to opt-in to receive text messages if something is found to be amiss with the car. The same technology that allows over-the-air updates means that the GS-6 can also communicate with Karma’s vehicle center in Orange County, Calif. and it has a “command center” setup which can relay messages to owners if the vehicle diagnoses itself with a problem.

Even with the price decrease, the Karma is still quite expensive. My GS-6L tester started at $95,700 (including a $1,800 destination charge), and after adding on some cosmetic touches, upgraded brake rotors, and those 22-inch wheels, which were $9,900 by themselves, the price tag totaled $114,700.

After nearly a decade that original Fisker Karma shape remains eye-catching and futuristic, even if the car itself no longer is. Series hybrid technology is no longer the anomaly it once was, and the lack of space inside is harder than ever to forgive. But Karma shows that the idea isn’t obsolete, and the GS-6 has a lot of charm.