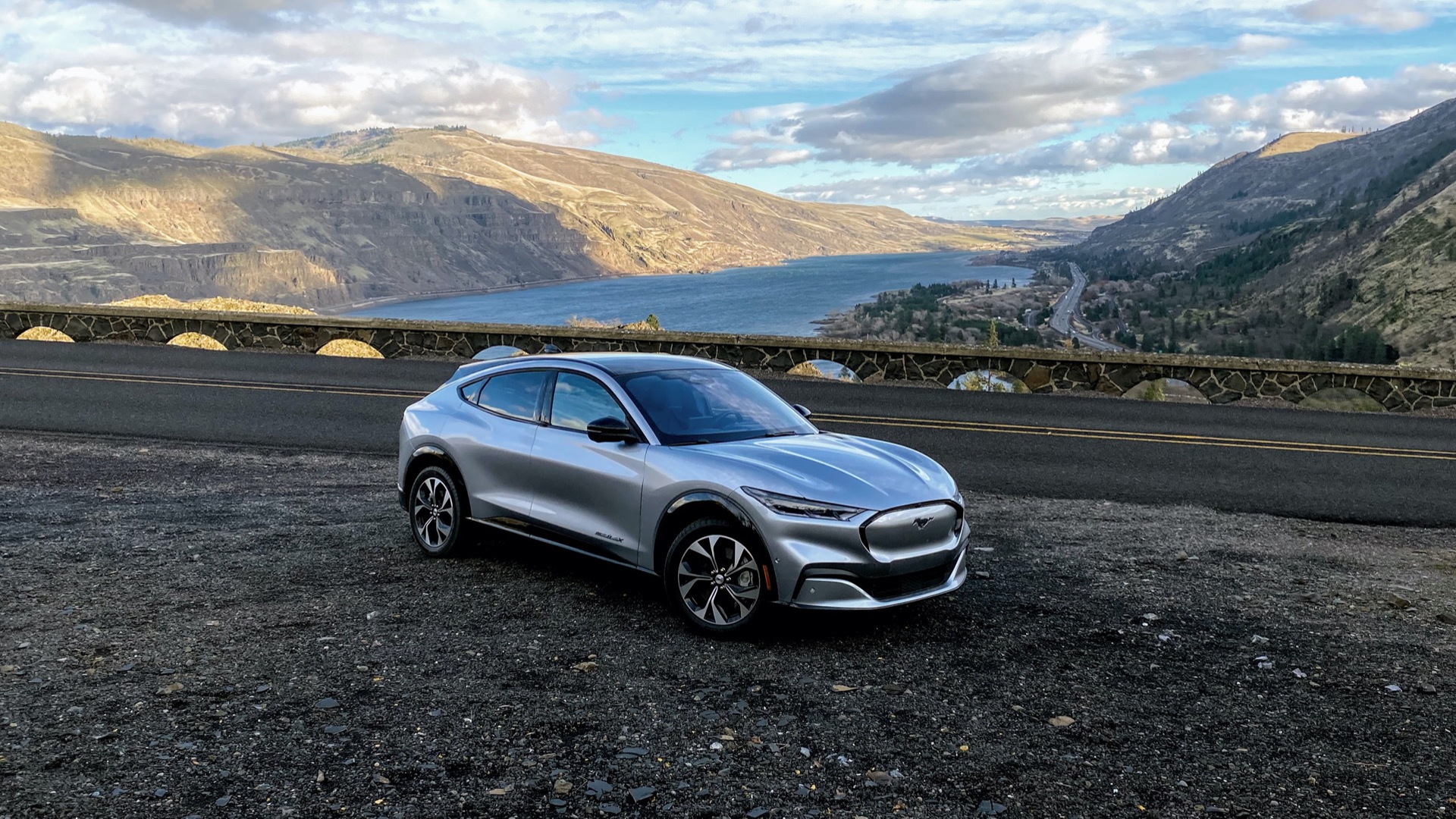 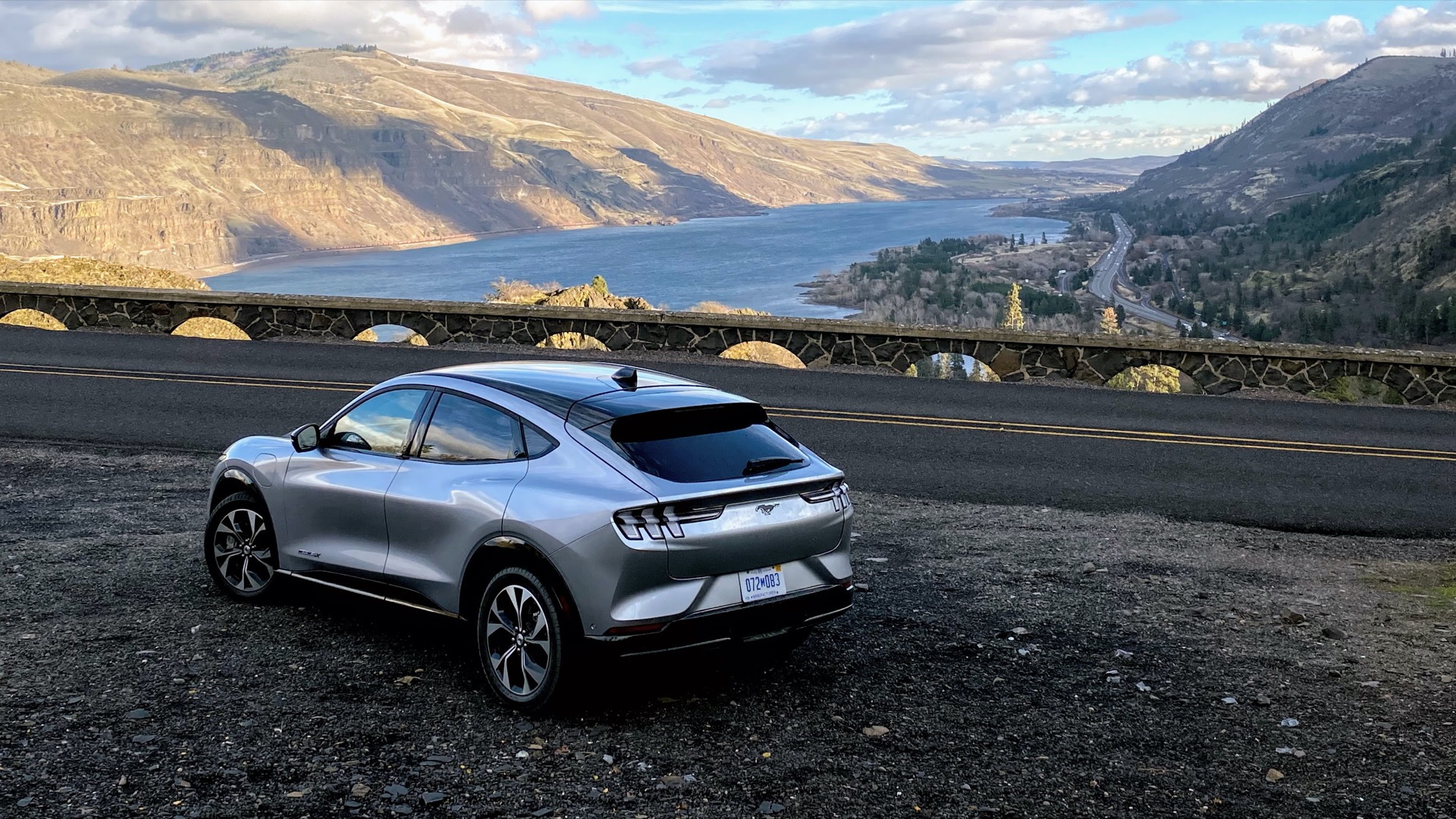 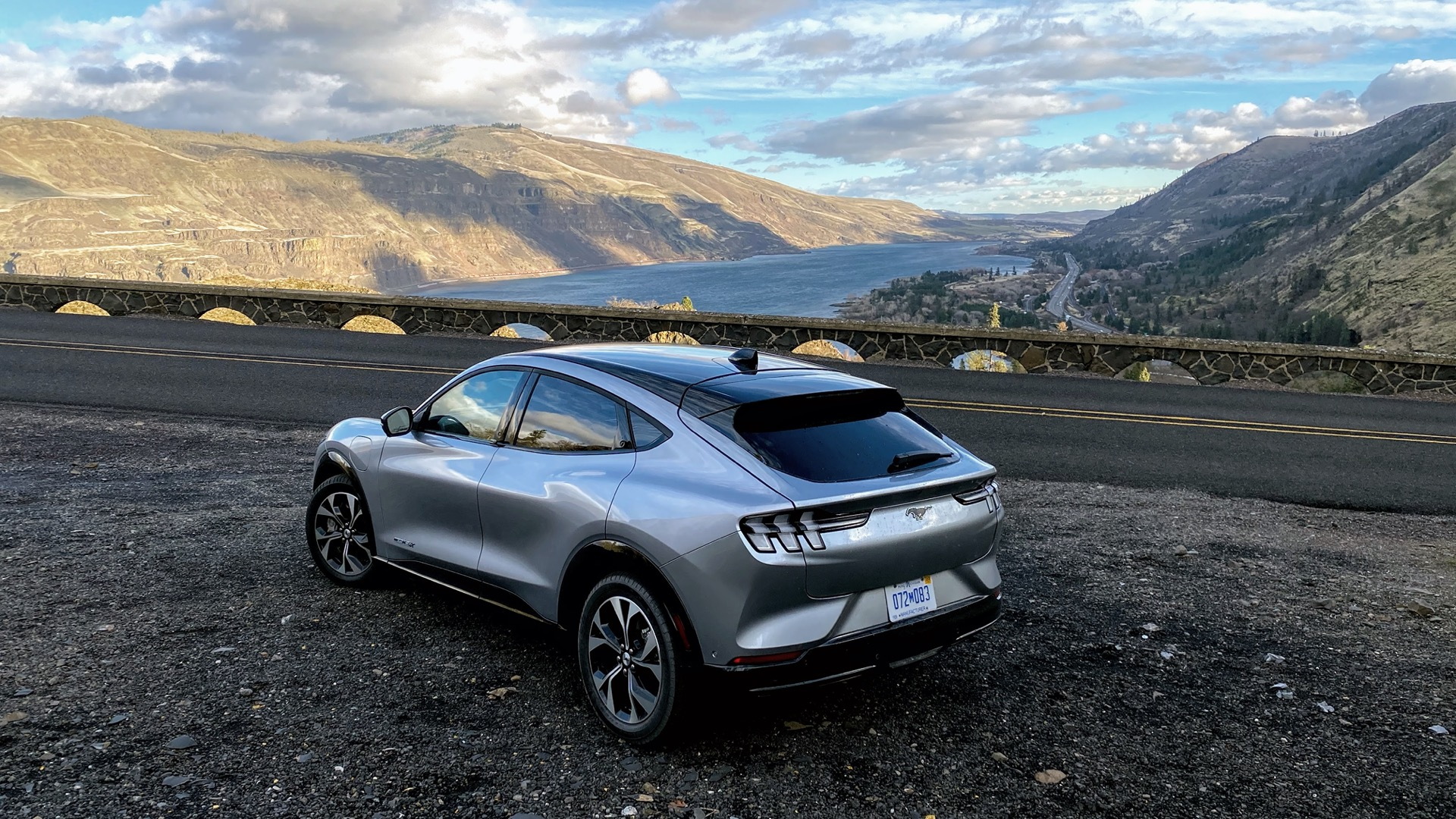 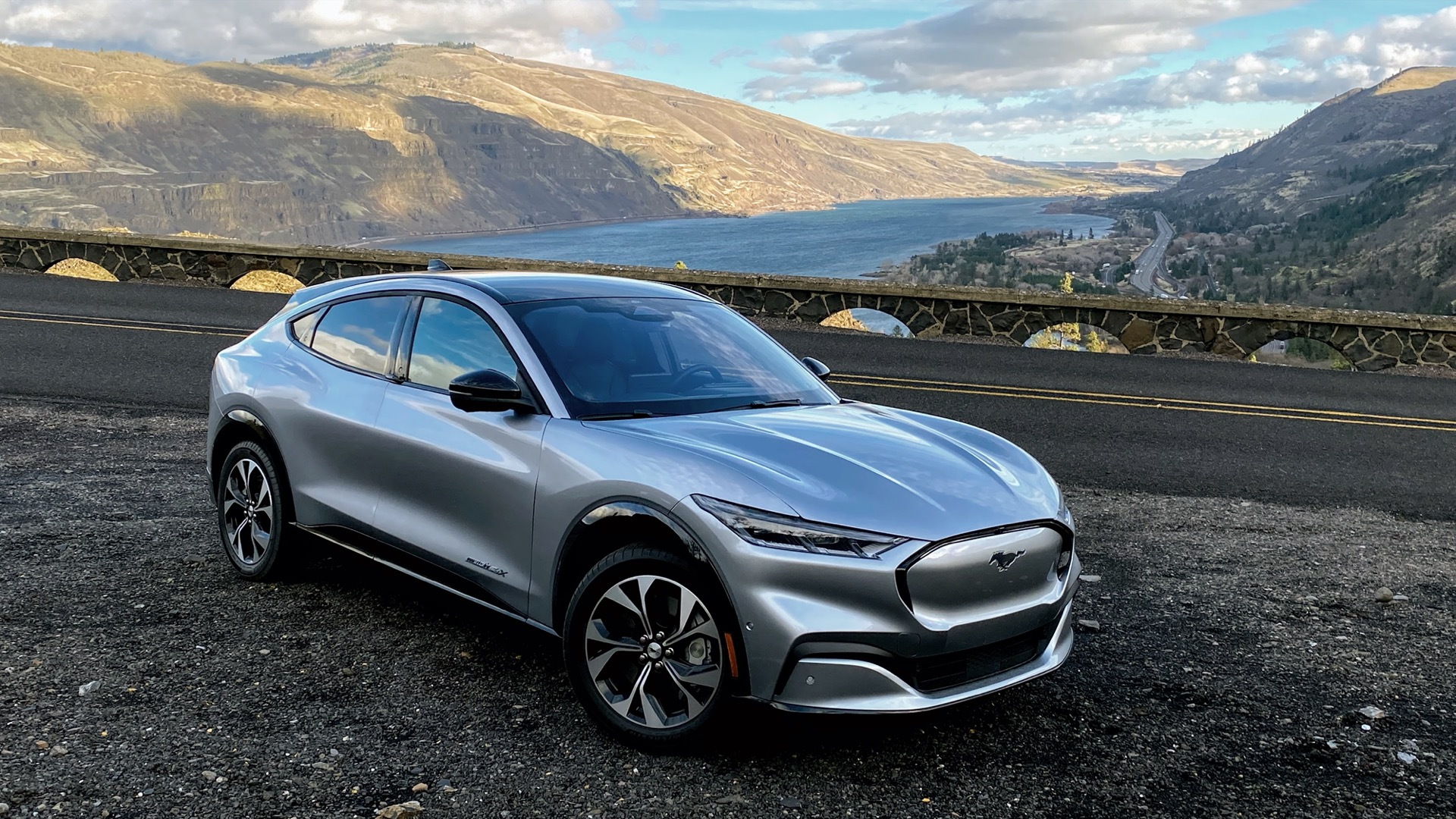 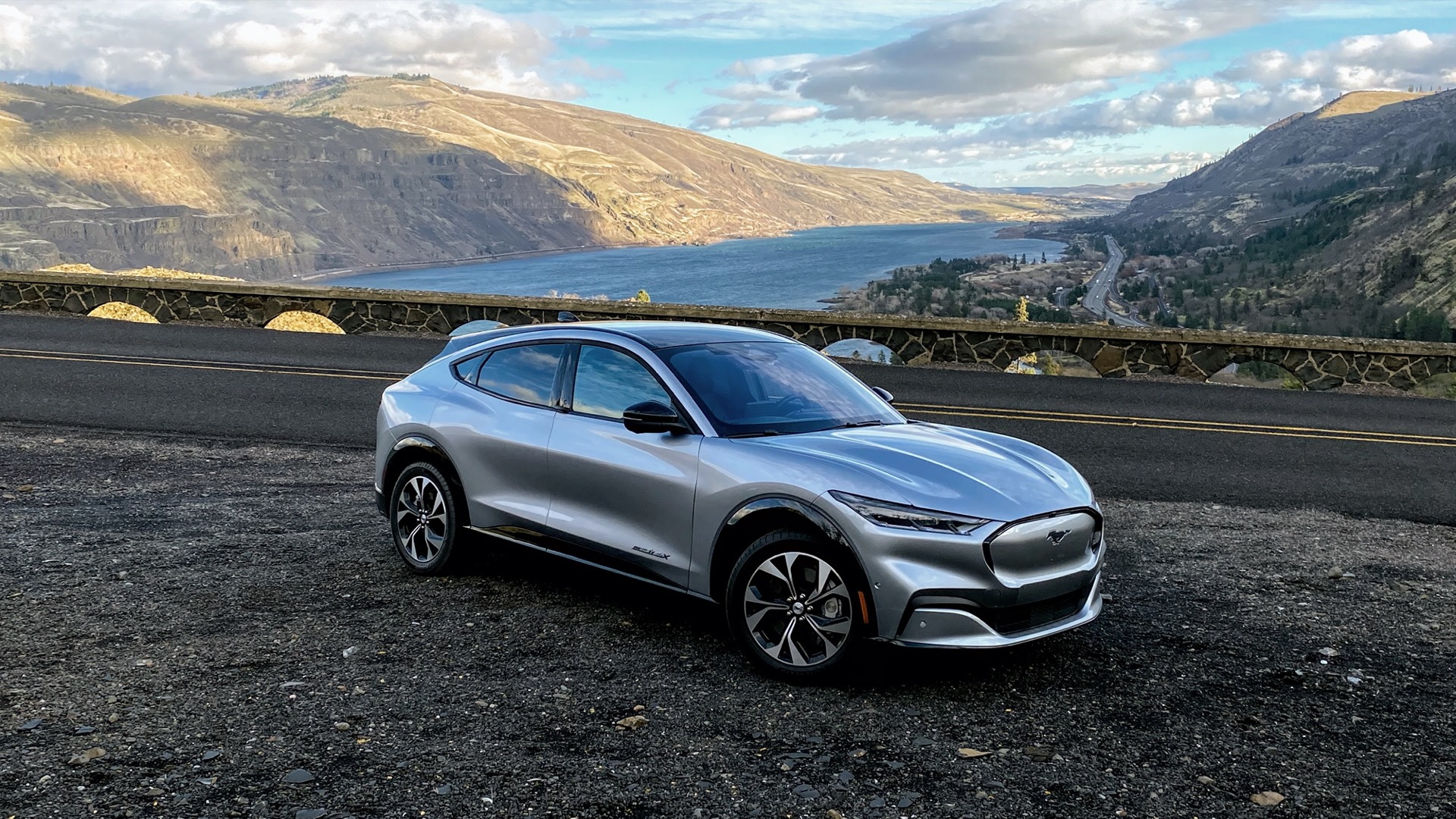 How far can the Ford Mustang Mach-E go on a highway trip at 70 mph? Just as far as the EPA ratings suggest at face value, I recently found out in a real-world range test.

The Mach-E is the first electric SUV not from Tesla to reach an EPA-rated range of up to 300 miles, and in the Mach-E Premium 4X form we recently tested, the official range is 270 miles.

Those are *not* the definitive ratings for highway range, though. When it comes to the American long-distance freeway trip, an EPA rated range of 300 miles doesn’t correspond to anything like constant cruising through most of a full charge at 70 or 75 mph. EPA range numbers are created by repeating a series of prescribed drive cycles—not all at highway speed, and not really representative of anything except a rather timid commute in mild weather.

For a better hint of what an EV’s highway range really might be, we recommend looking at its EPA city and highway efficiency numbers, which aren’t shown easily by the EPA’s fuel economy site. Fiddling with the interface for the Mach-E Premium 4X that we recently drove, you can see its actual ratings of 96 MPGe city and 84 MPGe highway.

The Mach-E’s 84 MPGe, using 33.705 kilowatt-hours per gallon, converts to 2.49 miles per kwh. Ford lists the usable range of the Extended Range version we had as 88 kwh. So its American highway range (yes, intentionally bypassing some adjustment factors) might be about 219 miles.

Yes, we're intentionally bypassing some adjustment factors, but mostly the same ones apply to any EV's rating, so bear with us.

Meeting expectations on the highway run?

That 219 miles is about exactly what I saw in a 70-mph range test I did after publishing our first drive of the Mach-E last month, but let me detail how I reached that result. After a full overnight charge, the trip computer beamed that I had 259 miles of estimated range. As soon as I headed out on the highway, however, it started revising the range downward—as it should for that type of driving. Most range meters look at the last few hundred miles and your previous driving style, but I have no idea of the driving style of the driver who preceded me with this vehicle.

I aimed for an out-and-back highway run—keeping the speedometer at around 70 mph, which would mostly go with the flow of traffic on this particular stretch of Interstate. It was a typical Pacific Northwest winter day—about 50 degrees, a little sun, near calm winds, some intermittent rain, constantly moist and requiring the climate control to be moving air to keep the windshield clear. So I set the climate control to 70 degrees F, relying on the excellent heated seats (which cover up the back to the base of the shoulders) and the toasty heated steering wheel to make sure I was comfortable if I needed anything more than that. In mild weather, of course, the range return would have been a bit better.

Without speculating too much about how the range meter was recalibrating and guessing my range—I’ll just say I trust would get better if I’d had this vehicle longer—the telling thing was that my efficiency average in these fast highway conditions soon settled into 2.6 miles/kwh. Curiously, that’s 0.1 mi/kwh lower than my average for the more aggressive trip on the colder day.

For this highway loop—with only a brief detour for the scenic backdrop above—I went 195 miles, with 13% remaining—suggesting a total range of about 224 miles before plugging in.

What to expect when the needle’s on E

Just as important as electric vehicle range is the predictability of the range meter at the lower ranges, so you can use all of what’s available. So I set out to also get to know what happens when you run the Mach-E *almost* out of charge.

As I found, the Mach-E has just a few warnings, and it doesn’t hobble you with reduced speeds or power (from what I could tell). The first low-battery warning comes on at 50 miles remaining (23% and 24% states of charge, for the two charges I got that low). One of the times it suggested that I reduce my climate-control use for more range.

For one of the charges, I pushed very low—intentionally. With just 3% remaining, it showed 8 miles of range and warned me that the nearest EV station was near the edge of my remaining range. That’s a useful warning to include, but in my case I was heading back home, ready to incorporate an extra loop or two if need be.

Delaying my arrival as much as I comfortably could, I pulled in for a charge with 1% and 3 miles remaining, and a total trip distance of 219 miles. This was the charge that included some much more aggressive driving, lower temps, and more liberal use of the climate control—though probably lower average speeds.

Absolutely no surprises here. What I saw with the Mach-E corresponds with what we’ve seen across most EV models: What matters more for EV range is speed more than any abruptness of driving style.

It’s worth noting that the era of the 300-mile electric SUV or crossover isn’t yet here. Not even the Tesla Model Y cracks 300 miles by the EPA highway cycle.

To look elsewhere in the Mach-E lineup, the Standard Range 4X and its 100 MPGe highway rating (instead with its 68-kwh of usable capacity) corresponds to 202 miles on the highway, while the Extended Range rear-wheel-drive model’s 104 MPGe corresponds to 272 miles.

Although Ford is soon likely to boost the range of the Mach-E in the same ways Tesla has done, through over-the-air updates that improve energy management, that’s a little bit beside the subject. Over a much longer term, getting EV shoppers to be realistic about range—and charging—is going to be a challenge.