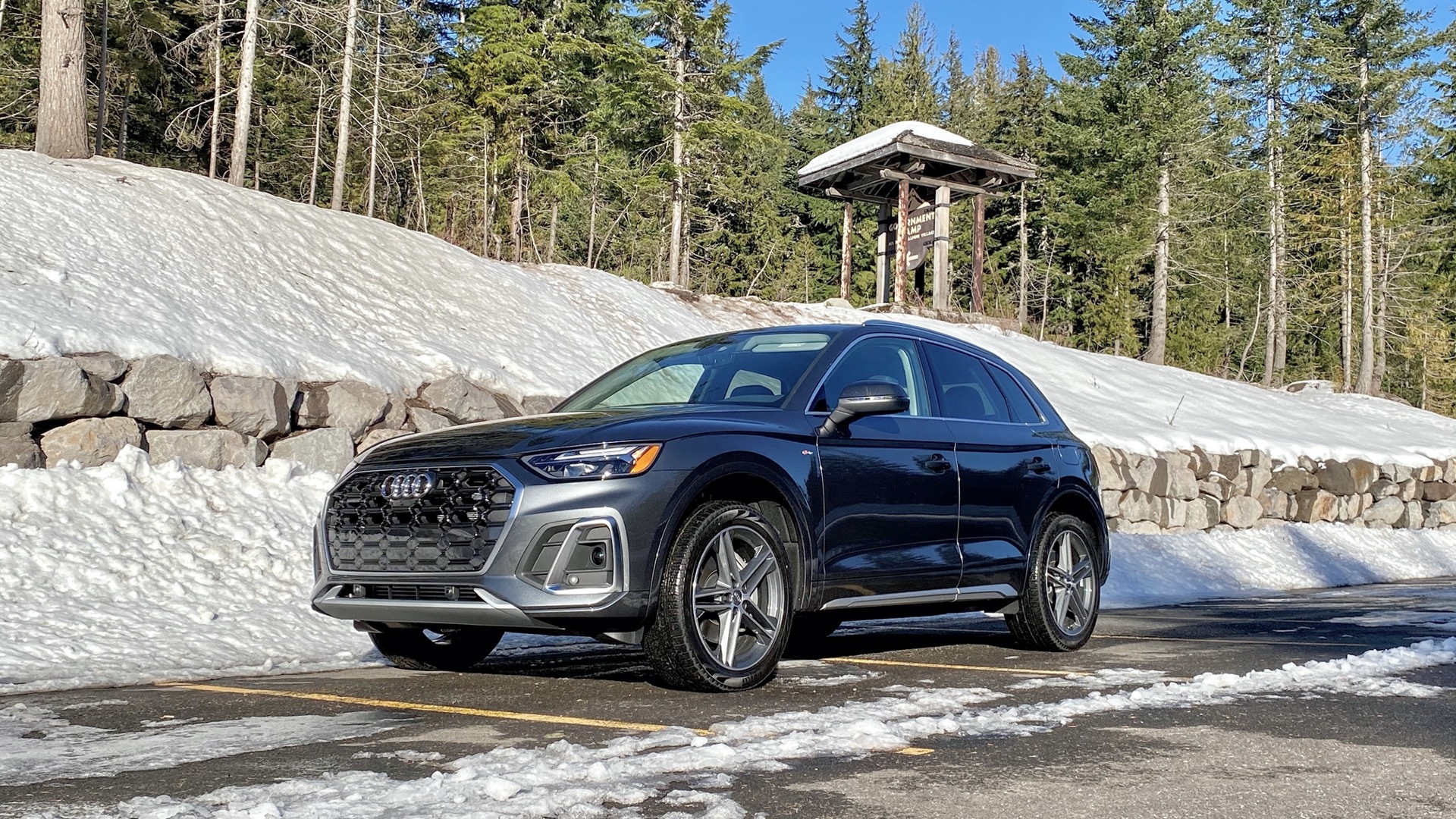 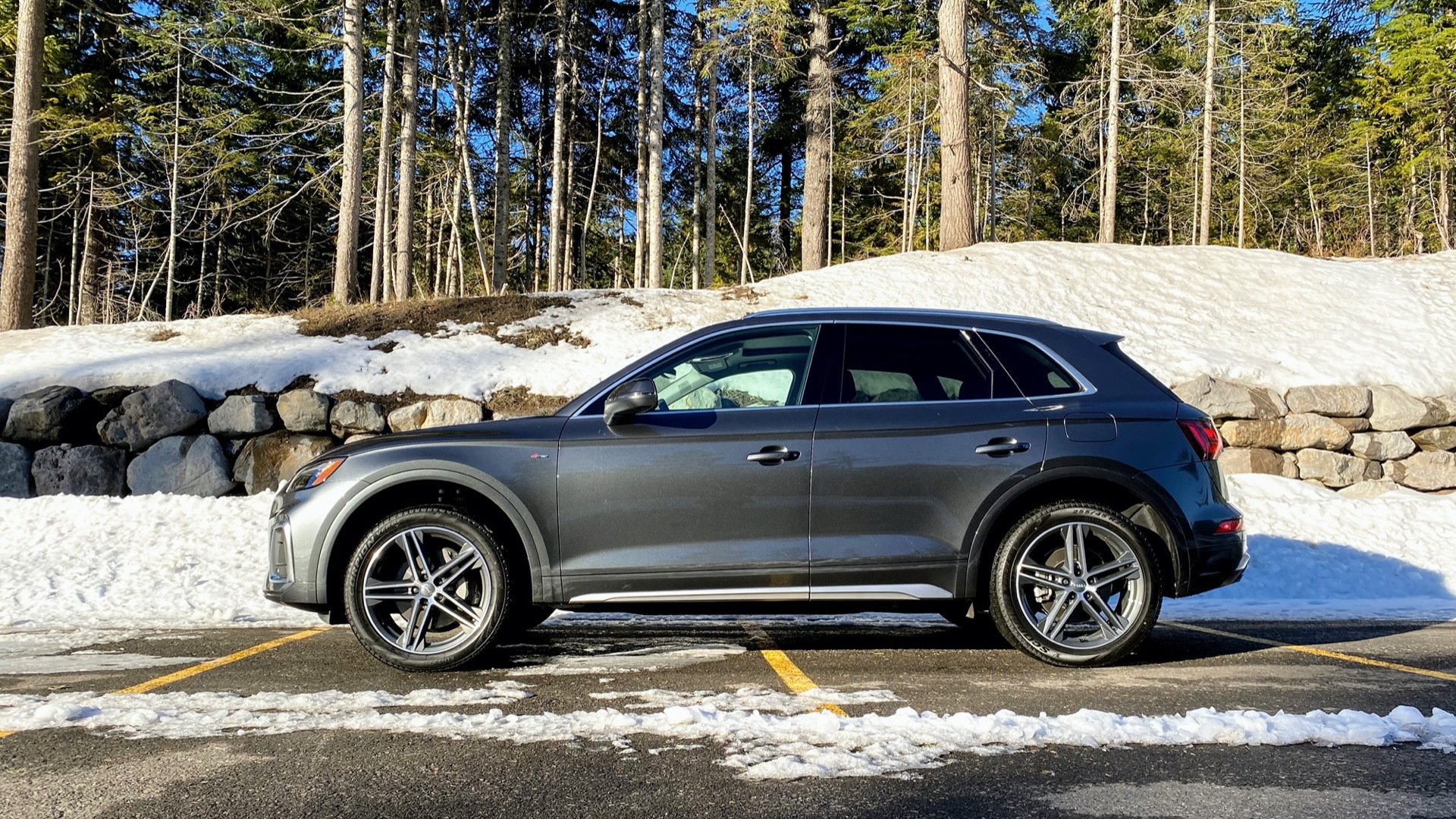 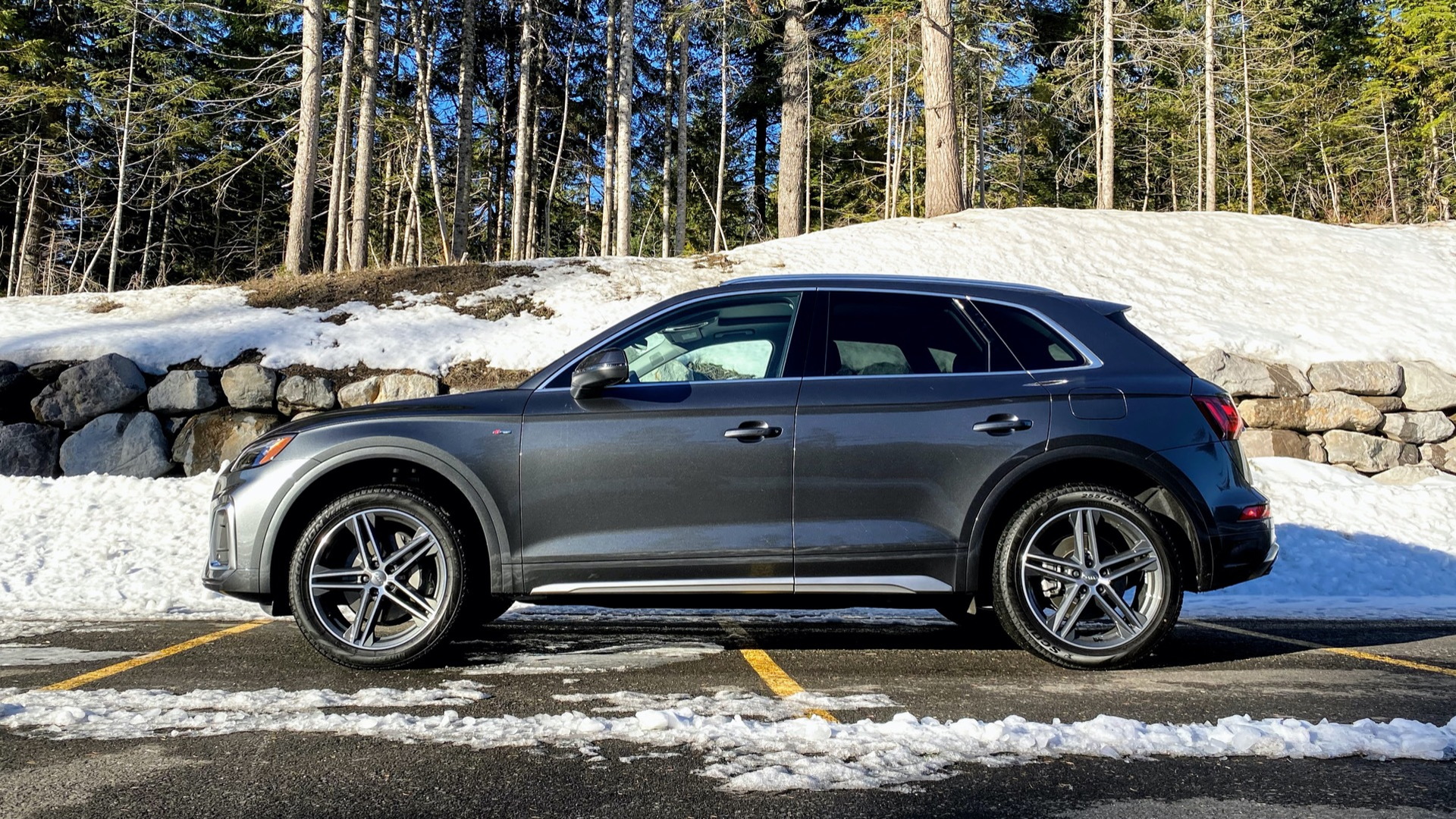 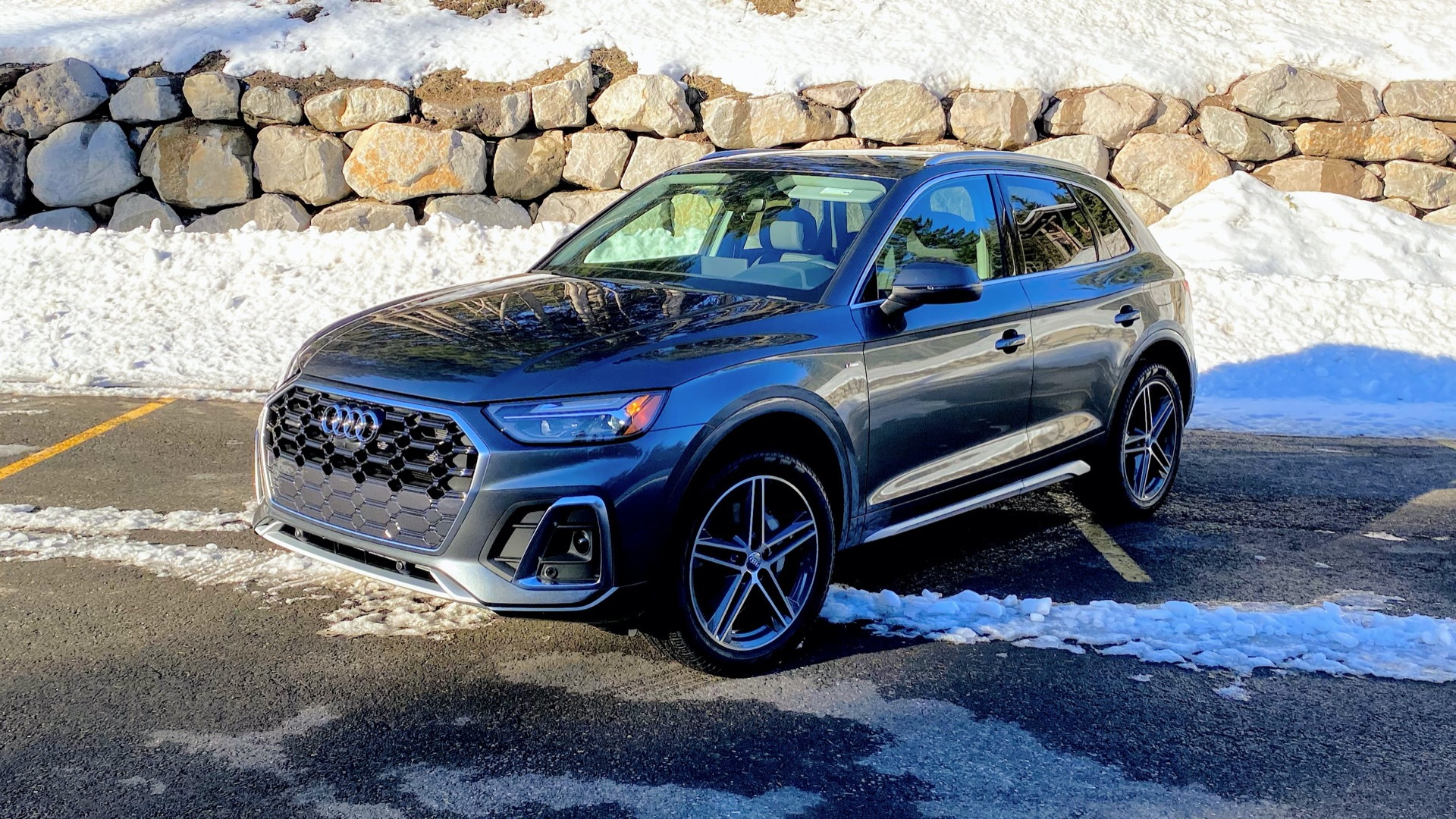 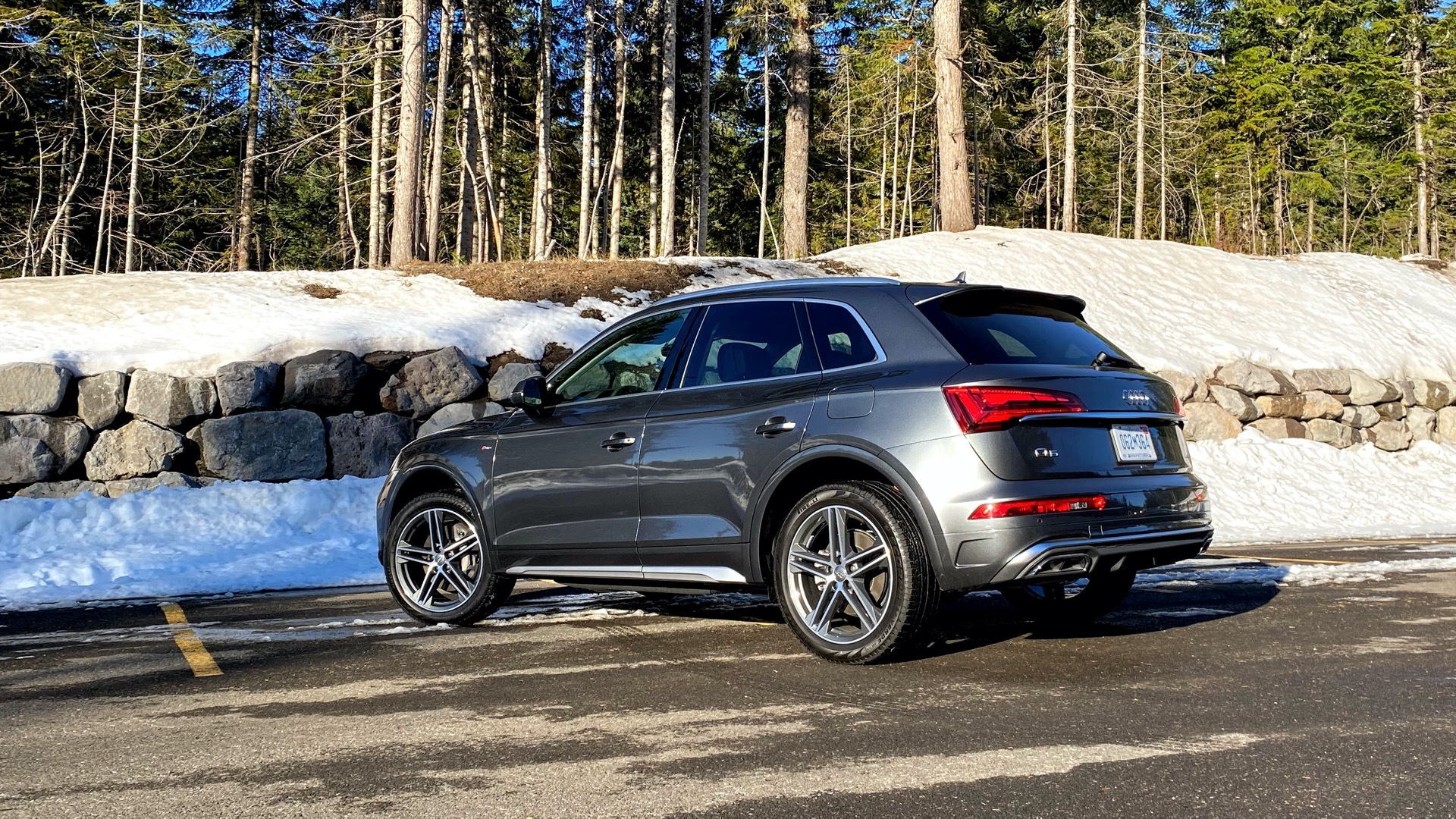 Sun Valley, Aspen, Butte, or Bozeman: The places in the West that might sound familiar as ski destinations or summer mountain getaways are increasingly the “Zoom towns” that weekend-warrior tech types—younger professionals who live for quick dashes up to the slopes, cliffs, or trails—are calling home.

While bigger West Coast tech hubs like San Francisco and Portland have carved out the surrounding charging infrastructure for fully electric vehicles, the 2021 Audi Q5 plug-in hybrid—known in the U.S. as the Q5 e 55, or the Q5 55 TFSI e—is exactly the kind of vehicle that fits sustainable-tech sensibilities and works for the Zoom town lifestyle.

Plug-in hybrids are at their best when it feels like multiple propulsion technologies are enabling a better vehicle, rather than just hampering each other with complexity; and with some time driving the Q5 plug-in hybrid earlier this month, I can say that’s for the most part what this version of the bestselling Q5 delivers. At present, Audi is the only one of the German automakers—outside of its VW Group cousin, Porsche—that’s making a genuine effort to establish a clear connection in the interface between its plug-in hybrids and its fully electric models.

Give the Q5 a full charge overnight, and when you enter the vehicle and turn it on, an EV mode button on the center stack illuminates. That’s the default mode with a charge and you don’t have to go hunting through modes to keep the gasoline engine the most at bay. With the EV button, you can also select a hybrid mode, or opt for battery hold mode, so as to save the charge you have for a quiet city-center drive.

Although you can’t lock the gas engine out completely—something you can do in, for insurance, the Toyota RAV4 Prime—the arc of a sweeping power gauge marks off the 0-60% zone, with resistance from the accelerator making it easy to stay electric. Switch over to the Dynamic mode, and it still stays electric, but the transition lowers to 40%.

The Efficiency mode that was selectable in the European-spec model we drove more than a year ago was nowhere to be found in this U.S.-spec model—replaced by Offroad, and with the same other four modes: Comfort, Auto, Dynamic, and Individual.

Generally speaking, whether in EV mode or with the gasoline engine running, the Q5 plug-in hybrid likes to coast. Select the Sport mode with the shift lever and suddenly there’s more regen, along with a more aggressive shift pattern once the engine starts.

I had the Q5 plug-in hybrid for about a day and a half and covered a bit more than 160 miles. Partly, I aim to understand the usefulness of its all-electric driving, which I got only a small sample of on a preview drive on German roads last year. So I drove through two electric charges locally—much like a commuter might do—and then took the Q5 PHEV on a 115-mile loop out of town and up to the mountain—literally up the side of Mt. Hood to the site of ski slopes—and back down. Now if only I’d had the time for some Nordic skiing.

True to its 19-mile rating

After giving the 14.1-kwh battery pack of this multitasker an initial full 240V charge of just over two hours (Audi says 2.4 hours, but my car took less than that), I set out with an anticipated 21 miles, with an outside temp of 42 degrees, leaving the climate control on (42 degrees out) and driving entirely in its default modes. The first commute-style route took me about 8 miles on the freeway at roughly 65 mph, then on a 50-mph road with occasional stoplights for about another 8 miles. I continued driving on a 30-mph road with more frequent stoplights until the Q5 PHEV kicked over to hybrid mode.

The prediction was startlingly accurate, at 20.8 miles all-electric. A second loop involved more stop-and-go, on a street that moves at 35-40 mph, followed by rolling country roads at 45 to 55 mph. There, I covered 19.9 miles before it started up the engine. Both results essentially confirm the EPA-rated 19 miles of range.

The Q5 plug-in hybrid is quick enough but not downright perky when you’re staying in electric mode. So after that restraint, I took off to have a little more fun.

Startlingly vivid for a utility vehicle

I switched the mode over to Dynamic and the shifter to Sport, and the 141-hp electric motor and 2.0-liter turbo-4 work in concert, together producing 362 horsepower and 369 pound-feet of torque, smoothing out shifts of the 7-speed dual-clutch transmission and enabling acceleration that continues even during shifts. The steering is startlingly vivid for a utility vehicle, and you sit low enough in the Q5 to feel close to the center of mass. It builds confidence, and I found the system answering to that, with a graceful-feeling slide of its 4,600 pounds around a hairpin corner, aided by the feel of just enough power sent to the rear wheels.

The Q5 PHEV has the “Ultra” version of quattro—meaning that it disconnects the rear wheels during many types of steady-state driving, for efficiency, but can reconnect the rear wheels and send more torque to them in just a fraction of a second.

In an empty but snow-packed parking lot up on the mountain—another 2020 anomaly—I verified, in Dynamic and Offroad modes, that the system does indeed have a lot of available traction and that it’s well-controlled fun.

The only gripe, as I headed back into Portland traffic—other than handing back the keys so soon—was that if you’re back in one of the Q5’s coast-happy modes but with the engine running, as a hybrid, the brake pedal tends to dial in an inconsistent amount of recuperation. As you slow down to a stop you feel (and slightly hear) the transmission downshift just as the brake boost changes.

All the space-efficient basics, with excellent seats

Traffic trudgery was also a cause to look around the vehicle a bit. This is a spacious, uber-efficient package, luxuriously laid-out, with space for adults in back and excellent, supportive front seats. Fold down the back seat and there’s no shortage of room for holiday big-box purchases—curbside pickup, of course.

The traffic light timer built into the dash plays a great role in efficiency—and most but not all lights along my path back were in the system.

The trip total for 92 miles in hybrid mode—including some very brisk mountain-road driving—ended up being about 27 mpg. That number was also right in line with the EPA rating.

Audi’s MMI Touch in the Q5 now has a 10.1-inch center screen, sitting high in the line of sight, with wireless support for Apple CarPlay and Android Auto. An extensive list of active safety items includes an adaptive cruise control system that will, with navigation data, modify its behavior based on the terrain and map data.

The Prestige model, which is what I had in Daytona Gray pearl paint, adds $9,800 to the base price and adds a Bang & Olufsen sound, quieter dual-pane glass for the front side windows, a heated/cooled cupholder, driver’s seat memory settings, extended satellite-radio channels, a heated steering wheel and heated rear seats, a power-adjustable steering column, additional interior lighting, and a navigation system—for a grand total of $63,390.

A sweet spot for efficiency and performance in a luxury model?

Simply put, the plug-in hybrid is the Q5 to get if you value a sweet spot between efficiency and performance. Its 0-60 mph time of 5.0 seconds makes it nearly as quick as the high-performance SQ5; it has a big efficiency and environmental advantage if you plan to plug in daily for the commute; and you may be eligible for a federal EV tax credit of $6,712 plus other incentives. With a base price of $53,895 for the PHEV, that would lower its effective price to about $47,000.

The other thing to note is that the Q5 plug-in hybrid isn’t going to fly over some of the country. I counted multiple PHEVs listed as bound for dealer inventory in a number of Middle America locations.

I’ve conveniently tip-toed around a couple of things. One of them is that the Q5 plug-in hybrid does save its more exciting personality for when the gasoline engine is on. The other is that there *are* fast chargers up on Mt. Hood, and my whole driving loop—as with most you’ll likely read on this model—could have been done in the E-Tron SUV or Sportback, or the upcoming Q4 E-Tron.

Audi has already targeted about 50 miles of electric range for its next-generation plug-in hybrids. And within a few years charging infrastructure and longer driving range will allow EVs access to more slopes beyond more EV-savvy states like Oregon and Colorado to Utah and Montana—to most if not all recreation destinations.

Just as plug-in hybrids are a transition to something else, they might be Zoom towns, but not for long.