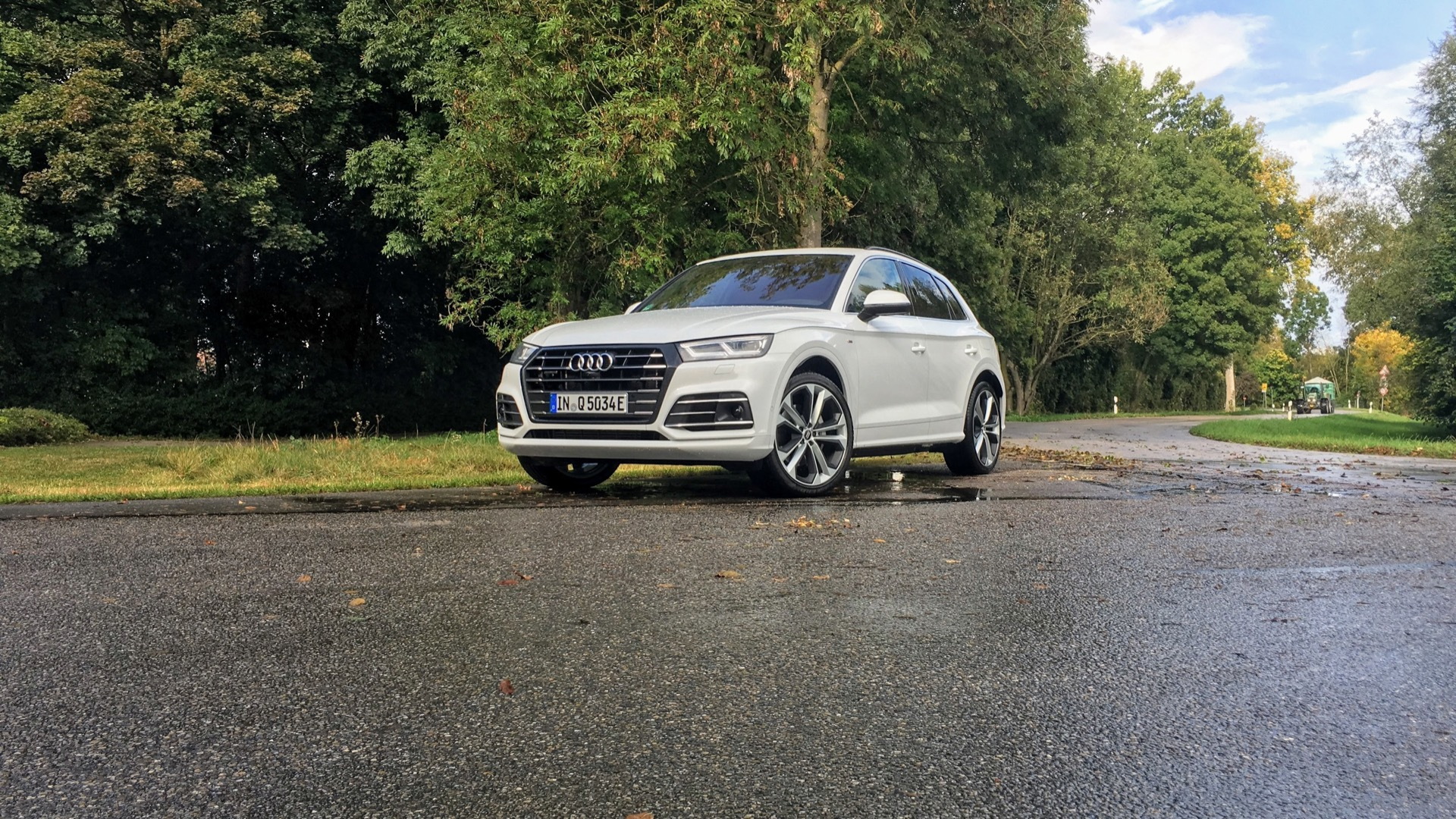 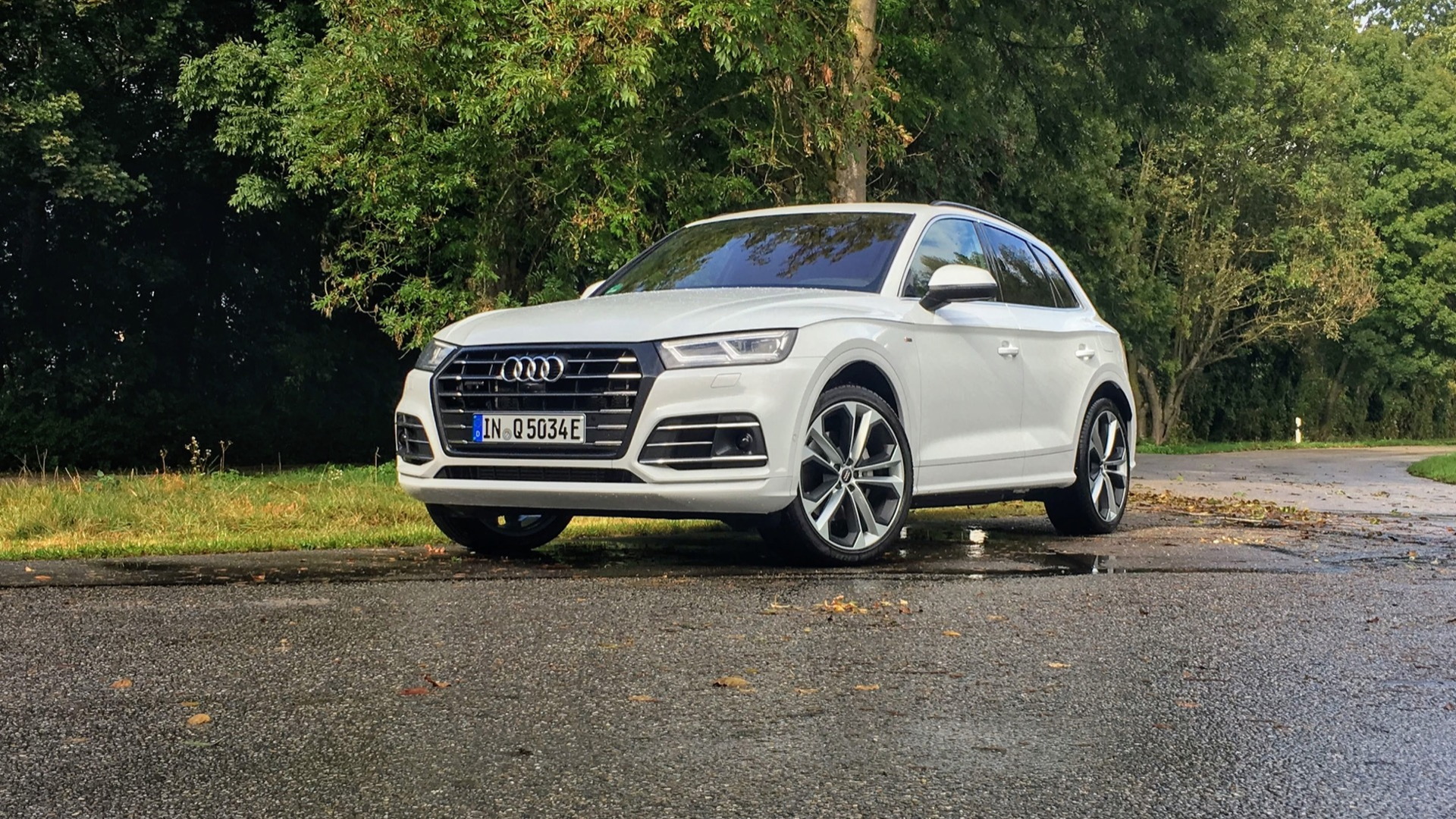 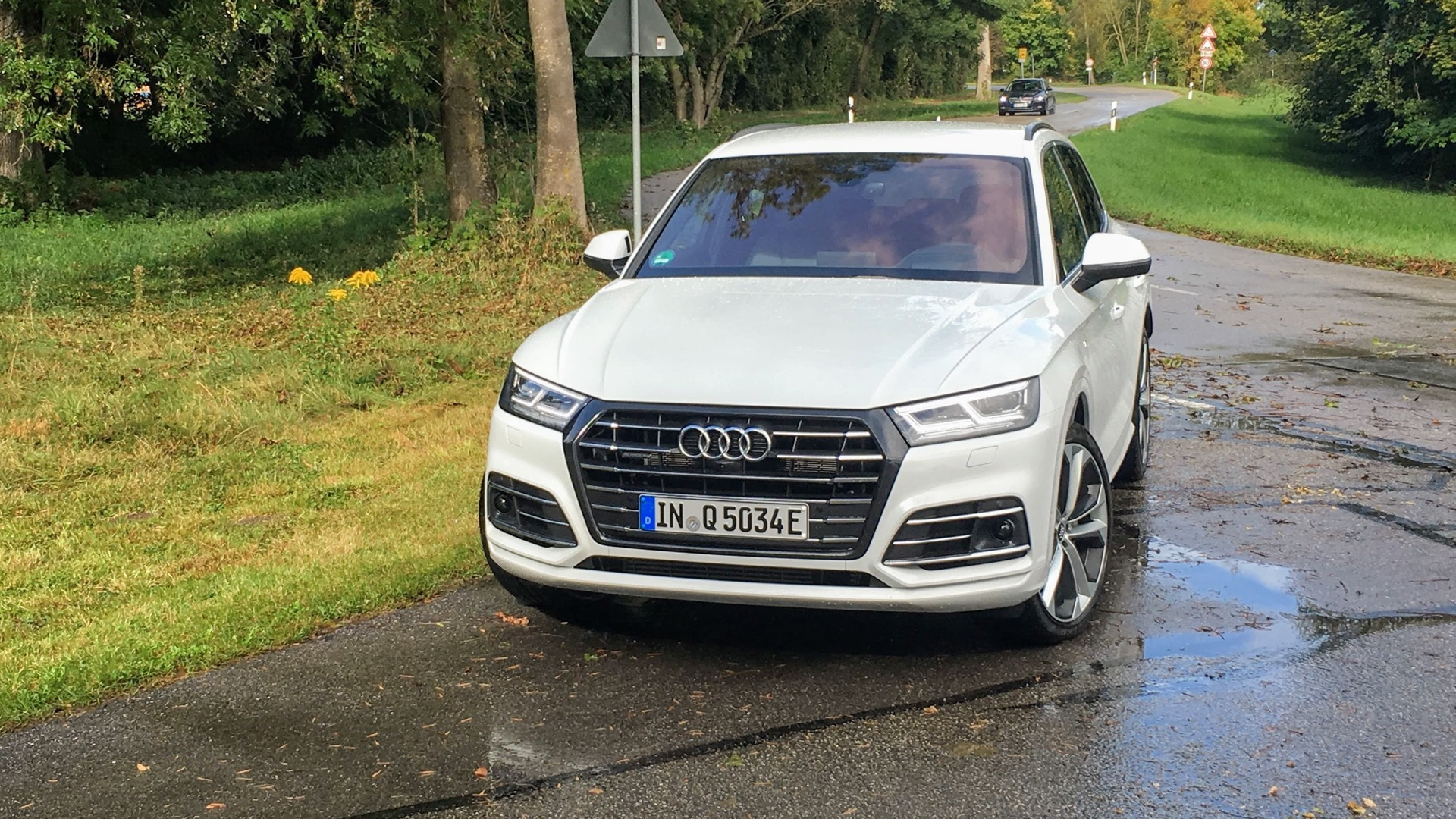 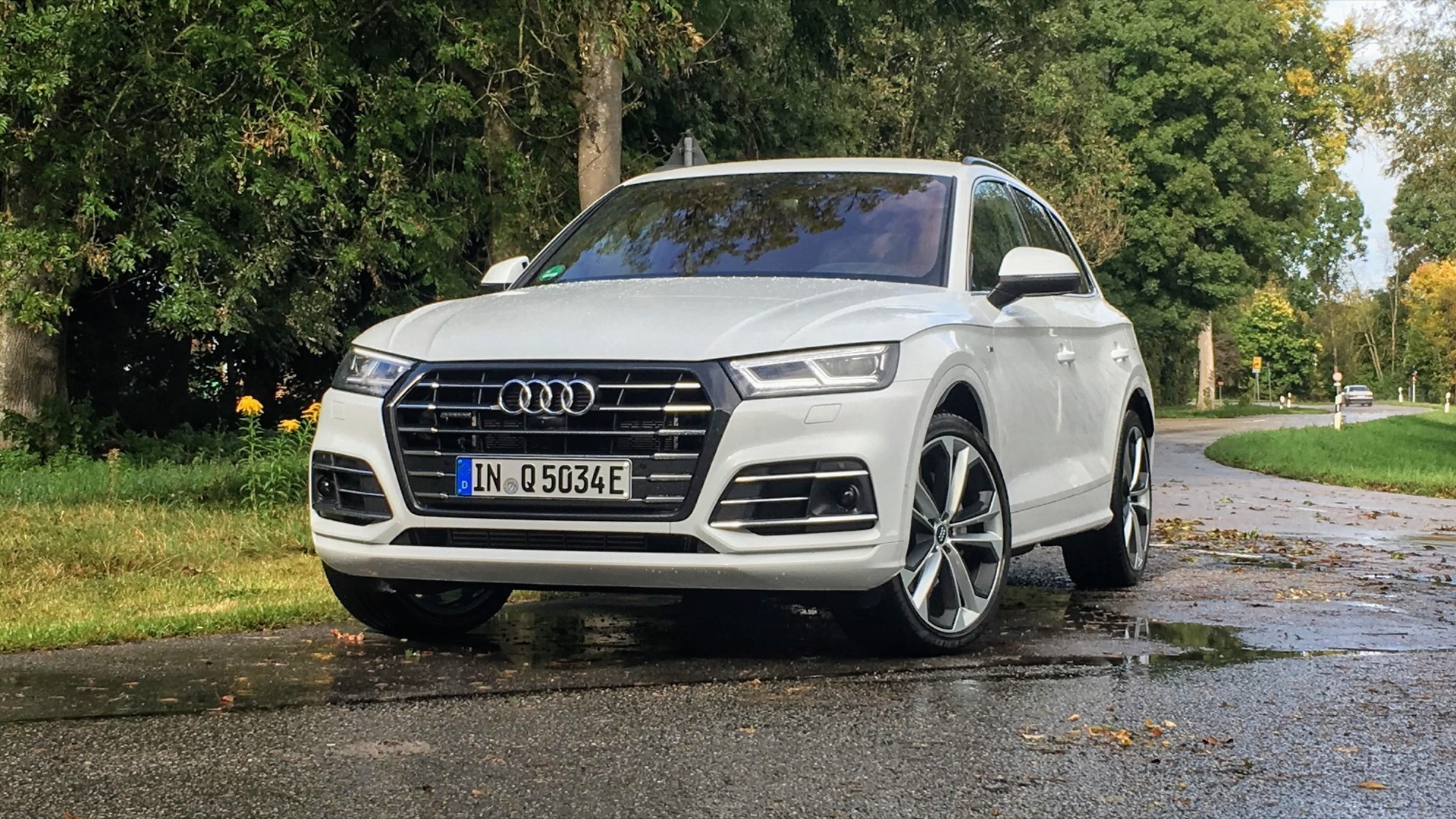 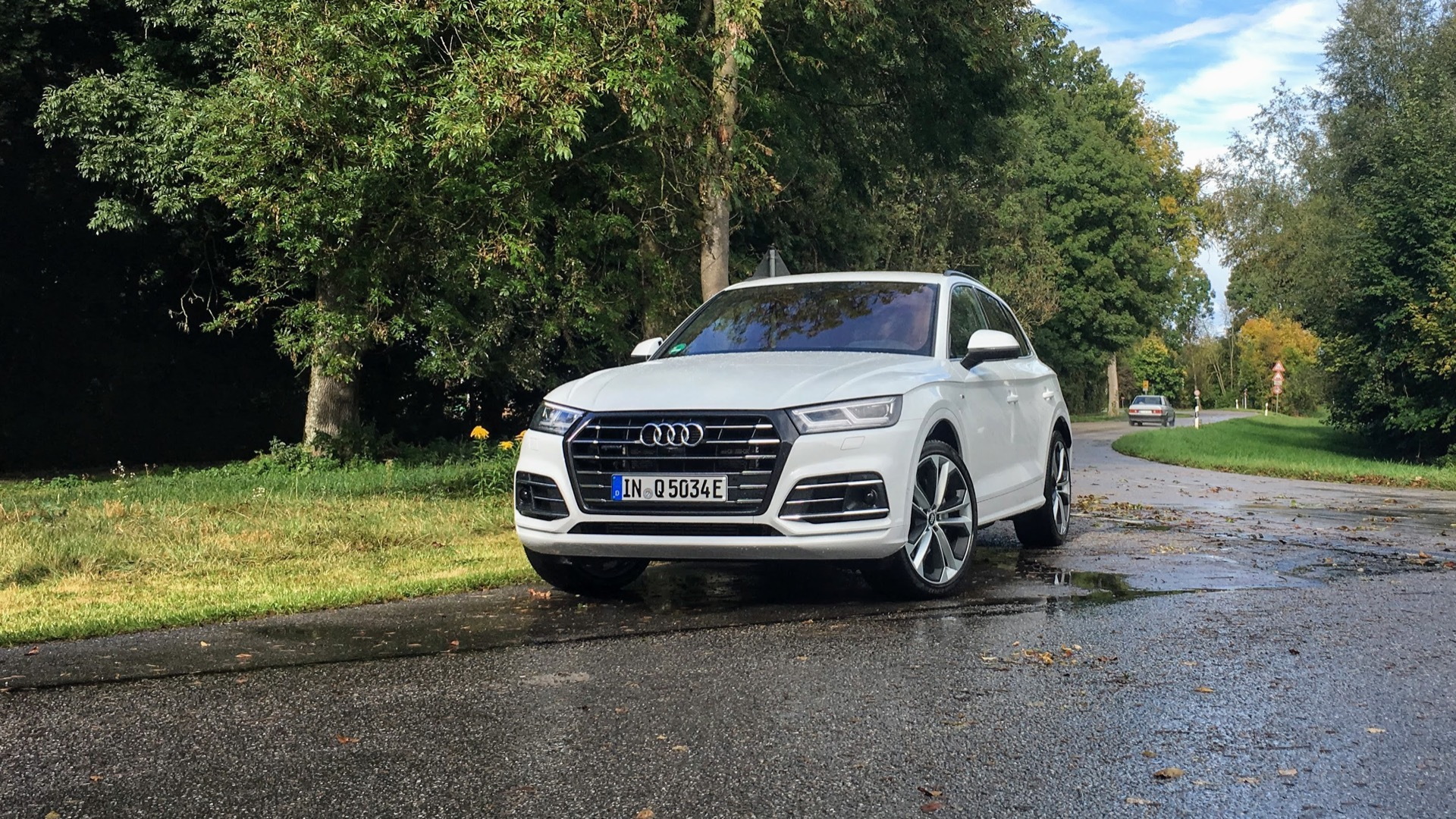 Audi sells more Q5 crossovers in the U.S. than any of its other models. And so it follows that Audi expects the upcoming Q5 2.0 TFSI 55 e quattro, as it’s badged for Europe—or just the Q5 plug-in hybrid to the rest of us, will be its best-selling vehicle that has a charge port and a fuel filler.

And there are soon going to be many, many vehicles in Audi’s lineup with charge ports. As Audi’s electrification strategy falls into place, the German luxury automaker makes one thing abundantly clear: The brand is diversifying in the short term.

You won’t find Audi putting all its cards in radical electric-only remakes of its already-popular lineup of sedans, crossovers, and liftbacks. Instead, it’s going to wedge slightly different (and different-sized) fully electric vehicles—and maybe some niche vehicles—into every nook and cranny in between.

We’ve seen that already with the E-tron electric SUV, which fits neatly into a space between the Q5 and Q7 but with some design-and-interface twists. Likewise, the upcoming E-tron GT super-performance electric sedan fits somewhere between the existing A6 and A8 sedans, and the future Q4 E-tron is a smaller electric crossover that will fit between the Q3 and Q5.

In the meantime, plug-in versions of Audi’s existing models like the Q5 PHEV play supporting roles for this transition. They will provide a solid footing in tradition but give charging-curious customers lots of chances to dabble in all-electric motoring as much as they feel comfortable with.

Globally, Audi plans to launch 30 electrified models by 2025, including 20 fully electric models. That means 10 plug-in hybrids are on the way, starting this year. Audi revealed four of the 10 already—versions of the A6 sedan, the A7 fastback, the Q5 crossover, and the flagship A8 sedan—, and the U.S. will be getting three out of those four (all but the A6 PHEV).

In short, what distinguishes this new round of plug-in hybrids is a strong 141-horsepower electric motor, and a liquid-cooled 14.1-kwh battery pack, small- to medium-suitcase sized and tucked under the cargo area in a way that doesn’t interfere with cargo or seat-folding. Audi says the reasonably large battery pack will provide about 25 all-electric miles of driving range (on the somewhat optimistic European WLTP cycle) before the internal combustion engine needs to start.

Off we go—and wait, who is this intended for?

Armed with that understanding, we took possession of a Q5 plug-in hybrid for about 90 minutes. It was enough to size up this plug-in’s mission, compare it to the somewhat different configuration of the A8 plug-in hybrid we also drove, and ask, well, who exactly wants a plug-in Q5?

In the Q5 plug-in hybrid, Audi’s familiar 2.0-liter turbo-4 is mated to a 7-speed dual-clutch automatic, with a permanent-magnet electric motor sandwiched between. The 141-hp motor contributes to the system’s total of 362 hp and 369 pound-feet, and it can accelerate to 60 mph in 5.0 seconds, according to Audi.

Charging the Q5 plug-in hybrid takes less than 2.5 hours on Level 2 charge point you might find at a shopping center or have installed in your garage thanks to the included 7.7-kwh onboard charger.

We think some of the target buyers for the Q5 plug-in hybrid—and this entire cohort of PHEVs—are people who will want to drive with the traffic flow to and from work on a charge (maybe plugging in when they’re at work) but set their sights on locations that don’t have a fully baked fast-charging infrastructure on the weekends.

To that end, I initially drove the Q5 PHEV like a commuter, aiming to keep the powertrain in all-electric mode but with the traffic flow, to see what kind of range I could get out of it. With one accidental start of the engine, we managed about 27 miles (44 km) on a full charge.

To do that, you’ll need to make sense of a daunting array of modes. There’s an EV mode button, a Sport powertrain mode, and a set of Audi Drive Select settings that affect steering and suspension behavior.

If you’ve just pulled the Q5 off the charger, it defaults to the Auto setting of Audi Drive Select. You’ll need to study a sweeping power gauge on the left side of the Virtual Cockpit display that shows you, from green to orange, when you’re headed from electric driving to “Boost”—which means the internal combustion engine.

In normal fresh-off-a-charge driving, in Auto mode, that transition is at 65 percent. In Dynamic mode that moves to 40 percent and toggles on the powertrain’s own Sport mode. (You can toggle that off at the shift lever or by clicking the EV mode button to re-prioritize electric driving.)

In all, there are Efficiency, Comfort, Auto, Dynamic, and Individual modes that dictate steering and suspension behavior as well as powertrain. Dynamic mode will automatically activate the Sport powertrain mode and engine-on hybrid operation. On the other extreme, Efficiency mode (combined with EV mode) will keep the engine off all the way until you floor the accelerator and push past the detent; it also runs the climate control in its own Eco mode.

We found the best luck in keeping the gasoline engine off in Efficiency mode, where the Q5 still felt plenty perky in electric mode, with a wider range of accelerator travel afforded before you activate the gas engine.

Realistically, in any of these modes you don’t need to follow the gauge, either. There’s a point of resistance in the accelerator travel that follows mode selection and although it’s subtle at first, you learn to understand where it is. Push past it and the engine fires up.

In the Q5, unlike the super-hushed A8 plug-in hybrid we also drove, you both feel and hear the 2.0-liter turbo-4 start and run. When woken up suddenly it’s rather coarse, but after a few minutes it was more Audi-like. When the electric motor and gasoline engine work together through the dual-clutch transmission the results are superb, with the electric motor filling in and damping out any interruptions or shift shocks.

If you lift your foot off the accelerator at speed the Q5 mostly keeps gliding along. If you have the Sport powertrain mode selected, it gives you more regen on lift.Across drive modes, stepping on the brake gives you up to 80 kw, or about 0.3 g of braking—enough to recoup a meaningful amount of range back with measured stops.

Two features in the Q5 plug-in hybrid help stretch that electric operation even more. Predictive Operating Strategy looks at map data when you’ve programmed in a destination and will automatically expand the amount of electric driving (by keeping the engine off more) to meet the trip length. There’s also a Predictive Energy Assist system that studies map data in a different way, cranking up recuperation all the way to about 0.1g, or 25 kw (without touching the friction brakes), for traffic ahead or even for a route’s topography.

The Q5 plug-in hybrid comes with resistive heating and an electric air conditioning compressor, as well as a heat-pump system that scavenges waste heat from power electronics to recover up to 3 kw of heat from 1 kw inputted. It will also include climate preconditioning to bring the cabin to a comfortable temperature while still in the garage, plugged in to the charge point.

Pricing for the 2020 Audi Q5 TFSI e quattro hasn’t yet been announced. It will likely cost close to where 3.0 TFSI models are today, near $53,395, including destination. The Q5 plug-in will be eligible for $6,712 under the federal EV tax credit, and in California they’re eligible for a $1,500 rebate. Practically,, pricing starts in the mid-$40,000 range—or not much higher than base Q5 versions.

The most telling thing will be where (and how widely) Audi offers these plug-in hybrids. If it’s only in California-emissions states, we question the motivations. But if they’re truly stocked and offered across the U.S., the Q5 plug-in hybrid could play a great supporting role in taking the four-ring brand electric.

Audi provided travel and lodging to Internet Brands Automotive to bring you this firsthand report.