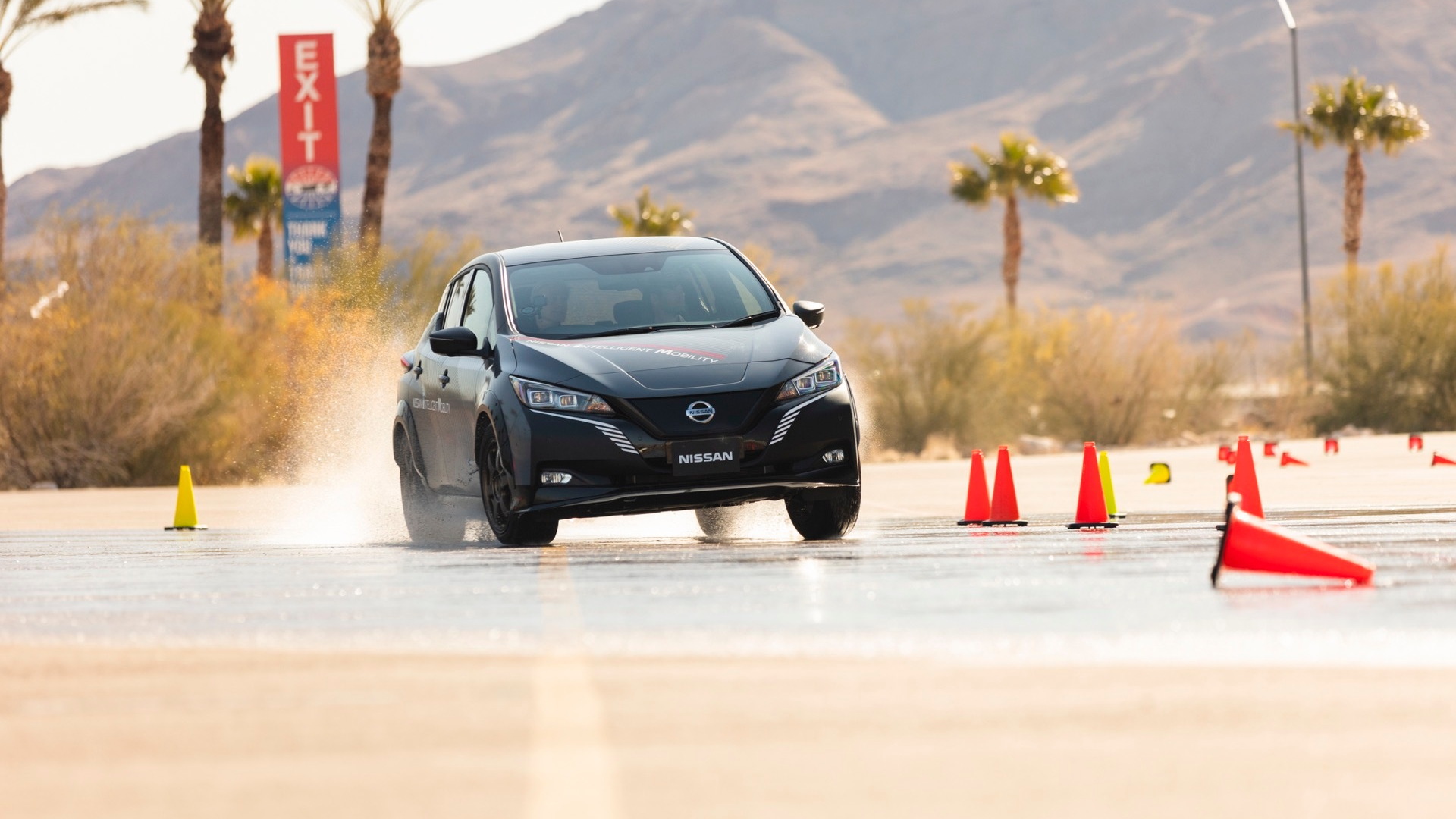 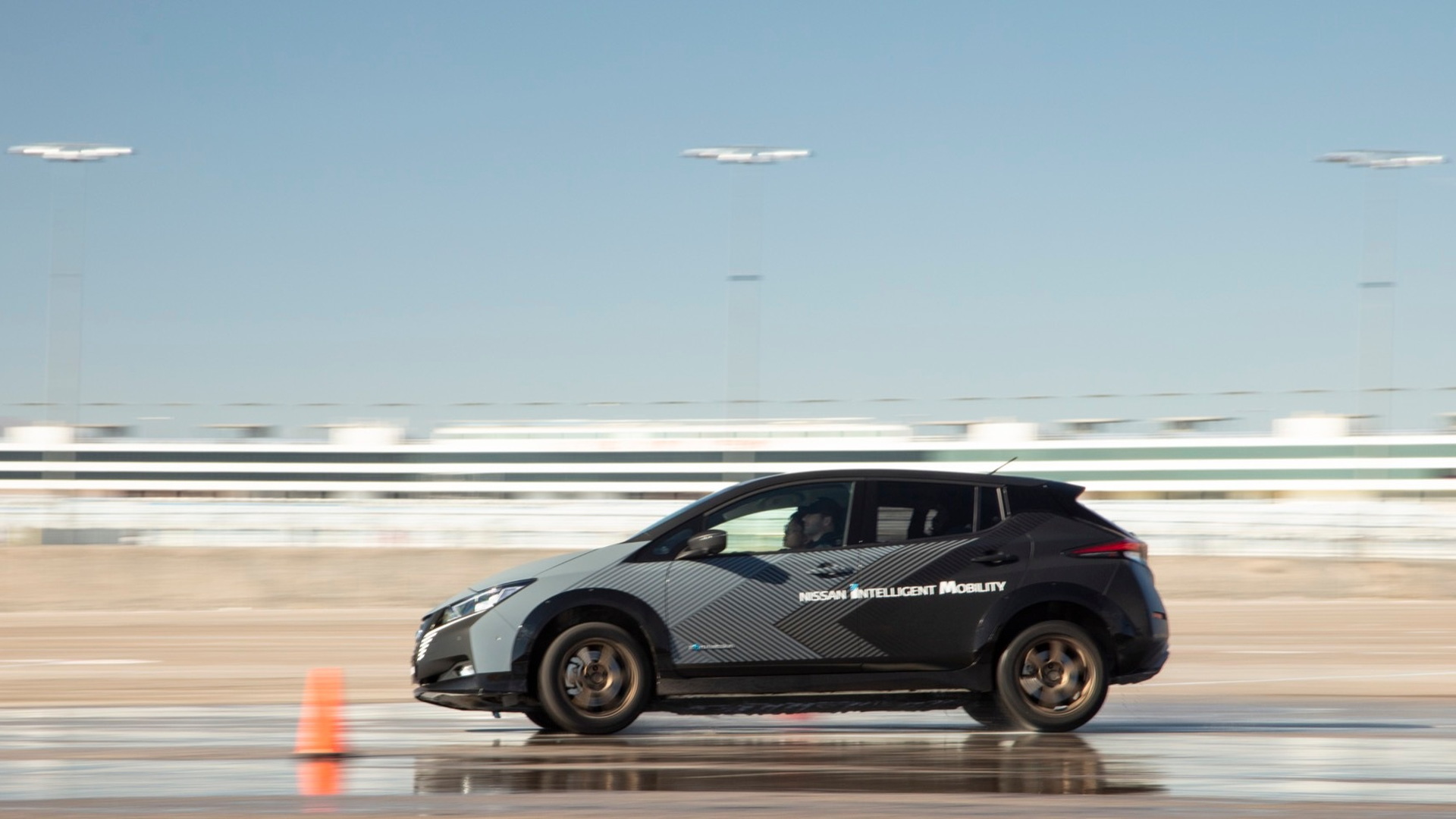 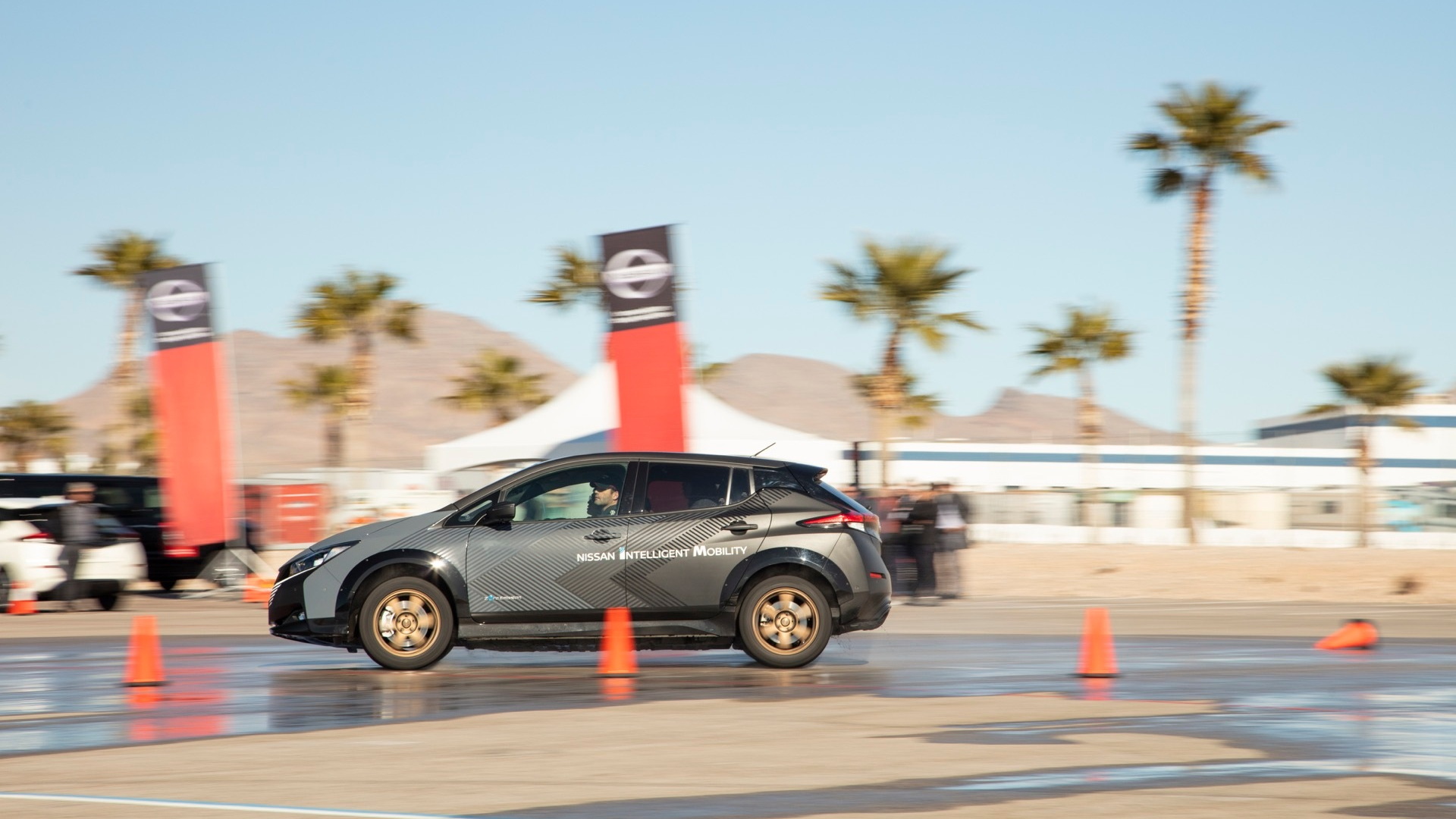 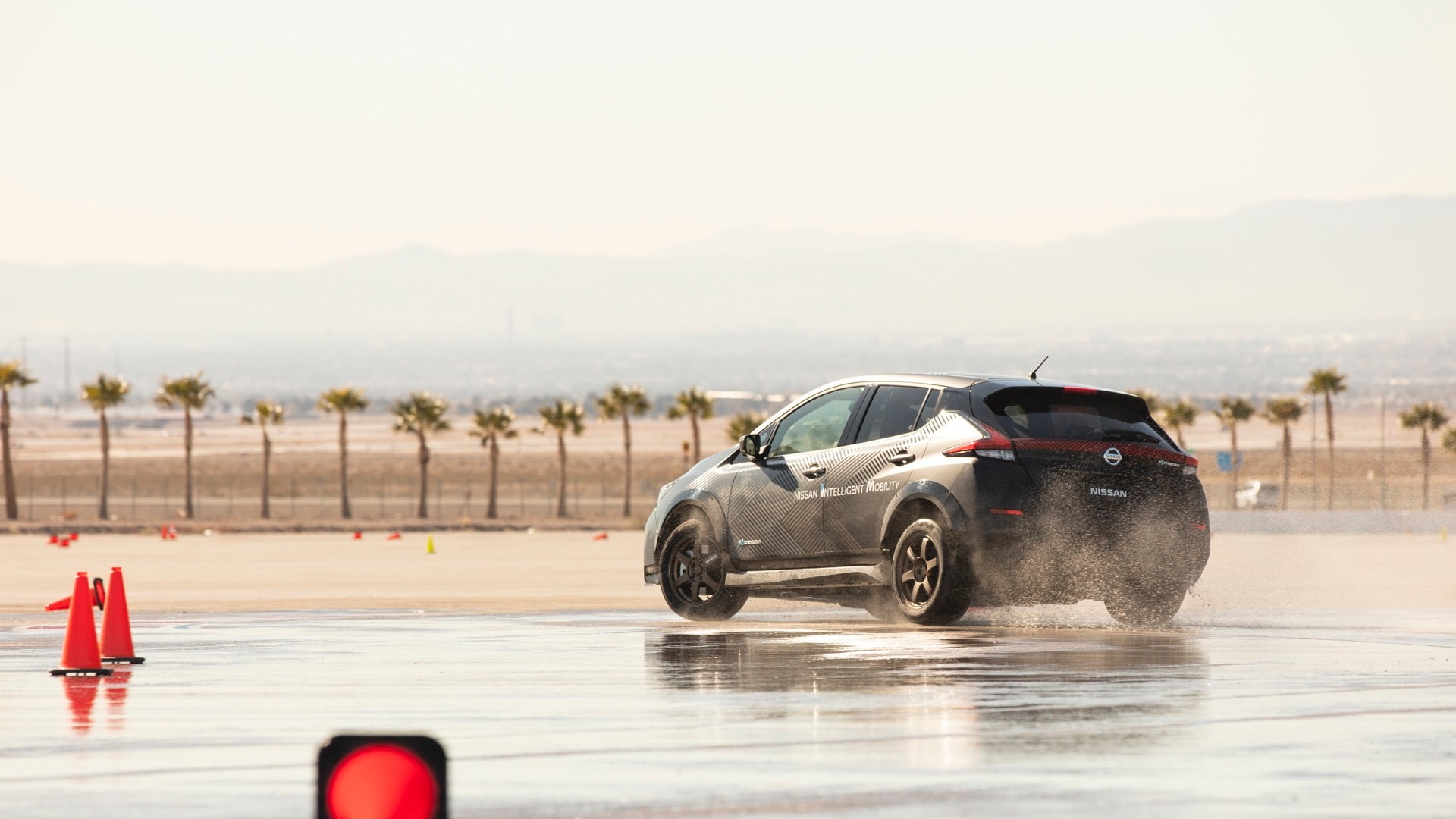 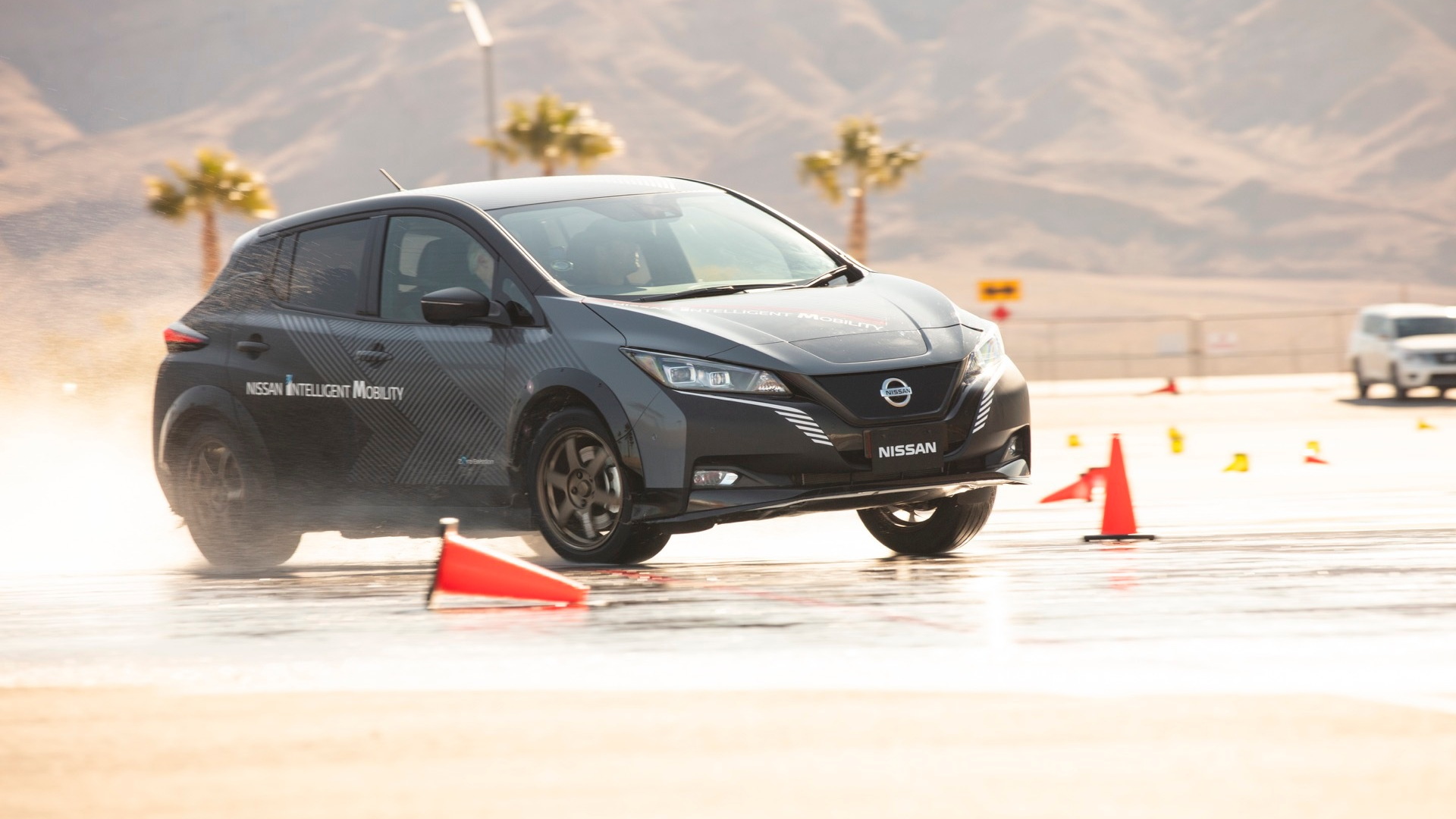 All-wheel drive is known for a few straightforward advantages in internal-combustion vehicles: It improves straight-line traction and can boost cornering stability.

In the electric-car realm, all-wheel drive can do even more. As Nissan demonstrated to Green Car Reports this past week with a series of dynamic demos at Las Vegas Motor Speedway, by combining twin motors with its chassis-control, and stability-control technologies into a single suite, called e-4orce (think e-Force), it claims to have also smoothed performance, reduced body motion, and made the vehicle easier to control.

Simply put, it claims e-4orce can make a car stay flatter on acceleration, braking, and cornering without stiffening the ride the rest of the time.

Nissan was thin on powertrain details regarding the production vehicle due in late 2021, closely based on its Ariya electric crossover concept revealed at Tokyo and shown for the first time this past week at CES in Las Vegas; but just days after Tokyo it teased this Leaf Plus twin-motor prototype. In it, Nissan packed a second EM57 motor, from the current Leaf, under the cargo floor, along with a second identical inverter. The two together make 304 horsepower and 502 pound-feet of torque—up from 215 hp and 251 lb-ft in the Leaf Plus.

Nissan stresses that this makes no suggestion that the Ariya will use Leaf motors or other components. Quite the contrary, it will use components from a completely new toolkit and platform to be shared by a wide range of electric vehicles worldwide. What Nissan does freely suggest is that e-4orce will be built into the Ariya and perhaps other future EVs—so in a way, this served as our first-drive impression of what’s at last coming next year from Nissan (and, perhaps, Infiniti).

On to the test

Outside of some special graphics calling out its purpose, and some snazzy aftermarket wheels, the all-wheel-drive car looks virtually indistinguishable from the current Leaf Plus from the outside. Nissan had to adapt the suspension in back to make this work, which necessitated those wheels. Doubling the weight of the Leaf’s motor, inverter, and a few other components, the e-4orce is likely at least 200 pounds heavier.

On the inside of this right-hand-drive car, special software controls installed on the dash show a live view of which motors are providing forward or reverse torque and which brakes are being applied.

Out on one of the Speedway’s closed courses, Nissan had worked out a series of exercises to show a group of journalists those differences—initially with a stock Leaf Plus, then with the e-4orce Leaf with individual wheel controls off, then with them on. First, we flat-out accelerated to 60 mph; second, we did an acceleration/deceleration “head-bobbing” test varying between 12 to 25 mph, with the Leaf’s more aggressive e-Pedal deceleration on. Then it has us run a tight slalom course at 37 to 43 mph to note general body motions and stability. And finally, we accelerated around a wet, constant-radius turn to see how long and fast we could maintain that.

While the difference from the Leaf Plus to the e-4orce car was, not surprisingly, mostly the feeling of stronger acceleration (it’s possibly a second or more quicker to 60 than the Leaf Plus, so in the 5-second range), the difference in going from the e-4orce car with its systems turned on versus off was like night and day. Pushing hard around the cones of the slalom course, the Leaf felt flatter in an almost uncanny way for the tall, somewhat softly sprung hatchback.

In the constant-radius turn Nissan said that e-4orce requires less steering adjustment to maintain a given trajectory in corners, and we agree. It forgot to mention that we could also go a lot faster.

That said, performance enthusiasts might feel a little left out with this efficiently quick tune, as Nissan hasn’t yet dialed in any oversteer—or a sense that a lot of power is going to the rear wheels in cornering. The potential’s certainly there though for future performance cars that might use the technology (if you believe the on-again, off-again rumors that Nissan is considering or developing an electric GT-R or equivalent).

Although the e-Force system uses essentially the same stability smarts as the Leaf, you wouldn’t know it. One of the keys, according to engineers, is that the Leaf e-Force can modulate its dual electric motors, and wheel brakes at all four wheels, all once per processing cycle of the whole chassis system—as opposed to just once for each piece of hardware in the current Leaf.

It adds up to a response time that can be roughly an order of magnitude quicker—and it allows the e-4orce car to blip any of the brakes to fine-tune the car's pitch, yaw, and trajectory while maintaining forward momentum with the other wheels.

In a tease of what’s to come, engineers admitted that this Leaf requires a special interface to make sure all the inputs and outputs happen quickly enough. The future cars would certainly use a faster communication-bus system.

On the course, the most significant profound dynamic difference of all could be felt when we intentionally dialed in too much steering input. With the new systems on, the Leaf felt magical in the way it pulled my line back tighter around the corner—rather than buzzing the brakes and cutting power while the line continued to go wide when the new systems were off.

When another driver took the wheel and I hopped into the backseat, the differences were easier to feel in terms of what the e-4orce system was doing outside of all-out racetrack maneuvers. In that speed-down, slow-down test, the car was doing less bucking and bobbing, with far less detectable queasiness in back when the driver suddenly lifted the accelerator. And in the slalom, the backseat was much less motion-sickness-inducing, with secondary motions reduced and the ride more level.

The e-4orce test car doesn’t allow any more regenerative braking—both motors together—than the front-wheel-drive Leaf Plus, but it does shift a lot more of the regen to the rear wheels to quell body motions for passengers and keep the body level and stable.

According to Jonathon Ratliffe, Nissan’s senior manager of Zero Emission Vehicle Engineering at Nissan Motor Corporation, Nissan gets a lot of requests to make its e-Pedal brake-regeneration system stronger, but such a system wouldn’t be so tolerable to passengers in the front-wheel-drive Leaf. In a future application with e-4orce, that might be possible, he hinted.

The test car uses the same 62-kwh air-cooled battery as the Leaf Plus. Ratliffe admitted that any battery to be produced with such a dual-motor system would need liquid cooling, but this application was good for testing at the track at those outputs.

What it means in Ariya and beyond

Nissan’s new platform for electric vehicles could prove the right reboot for Nissan. With the reveal of the Ariya concept—looking quite production-bound—and this e-4orce car together, more than 10 years after Leaf we’ll finally see Nissan’s next big electric move.

It’s been a long time coming—and much of the success of its upcoming EVs depends on the next battery technology and the support that it’s given to Leaf by then—but this drive was reassuring that it will likely be something very satisfying to drive and to ride in.