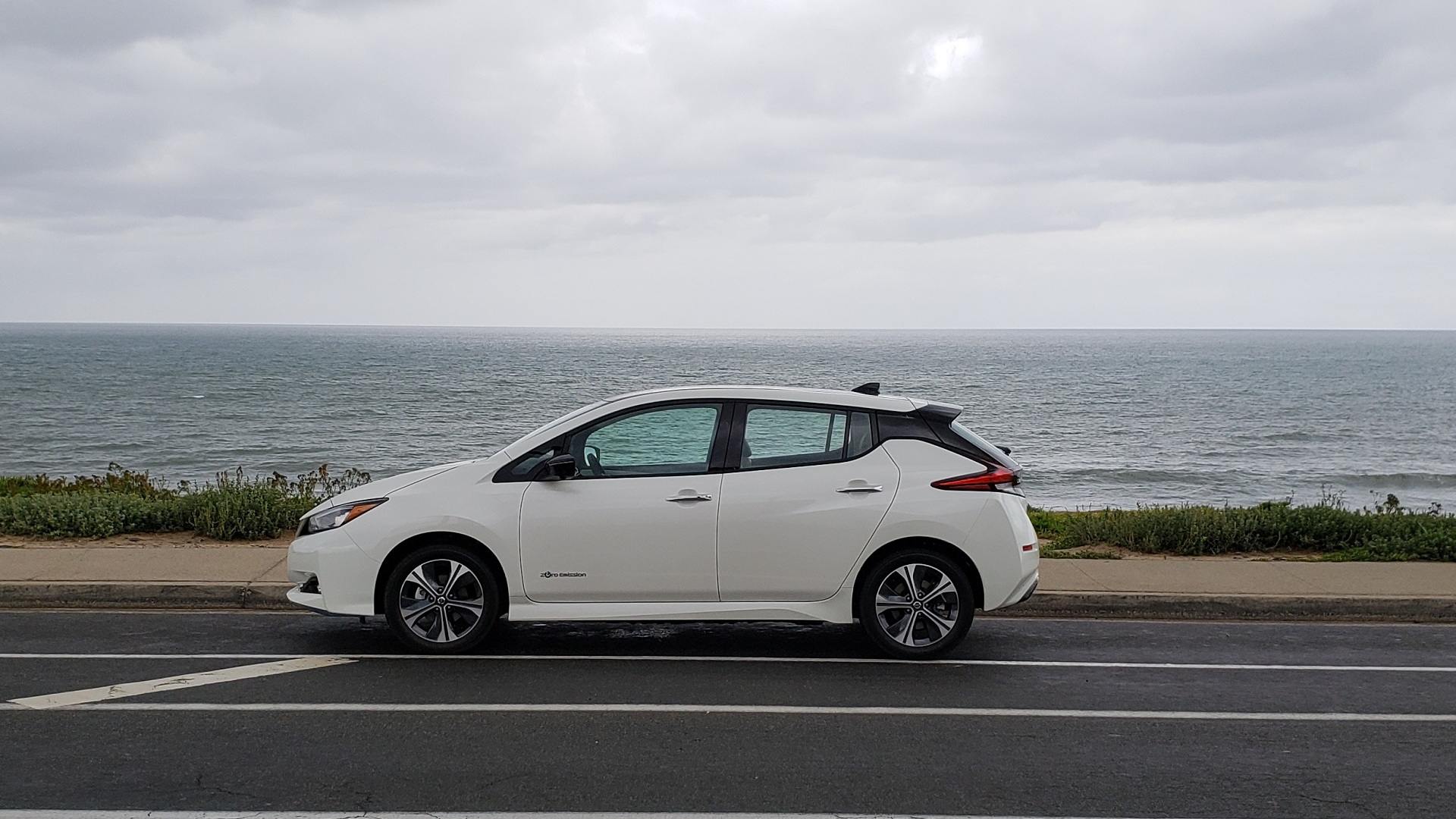 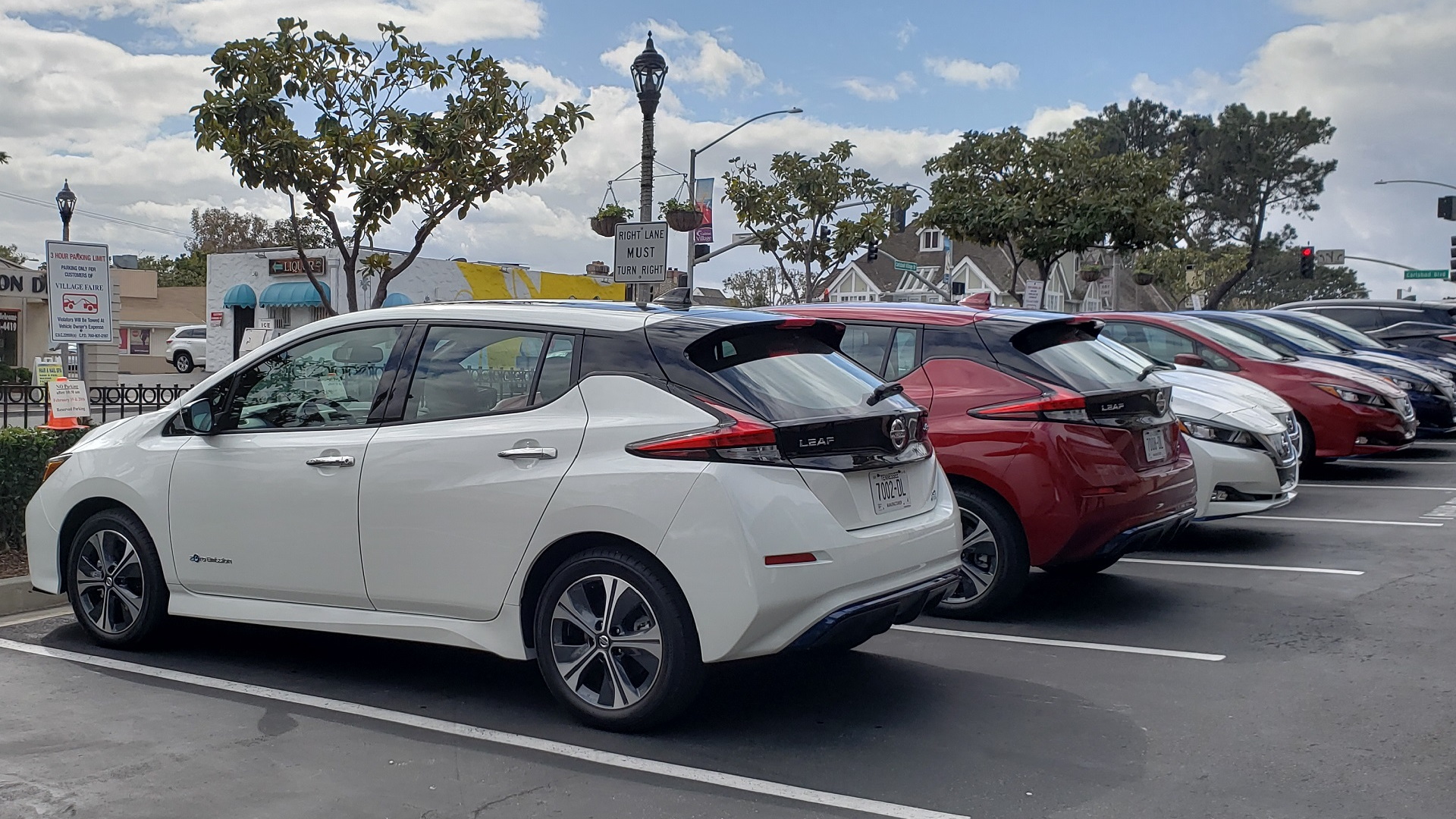 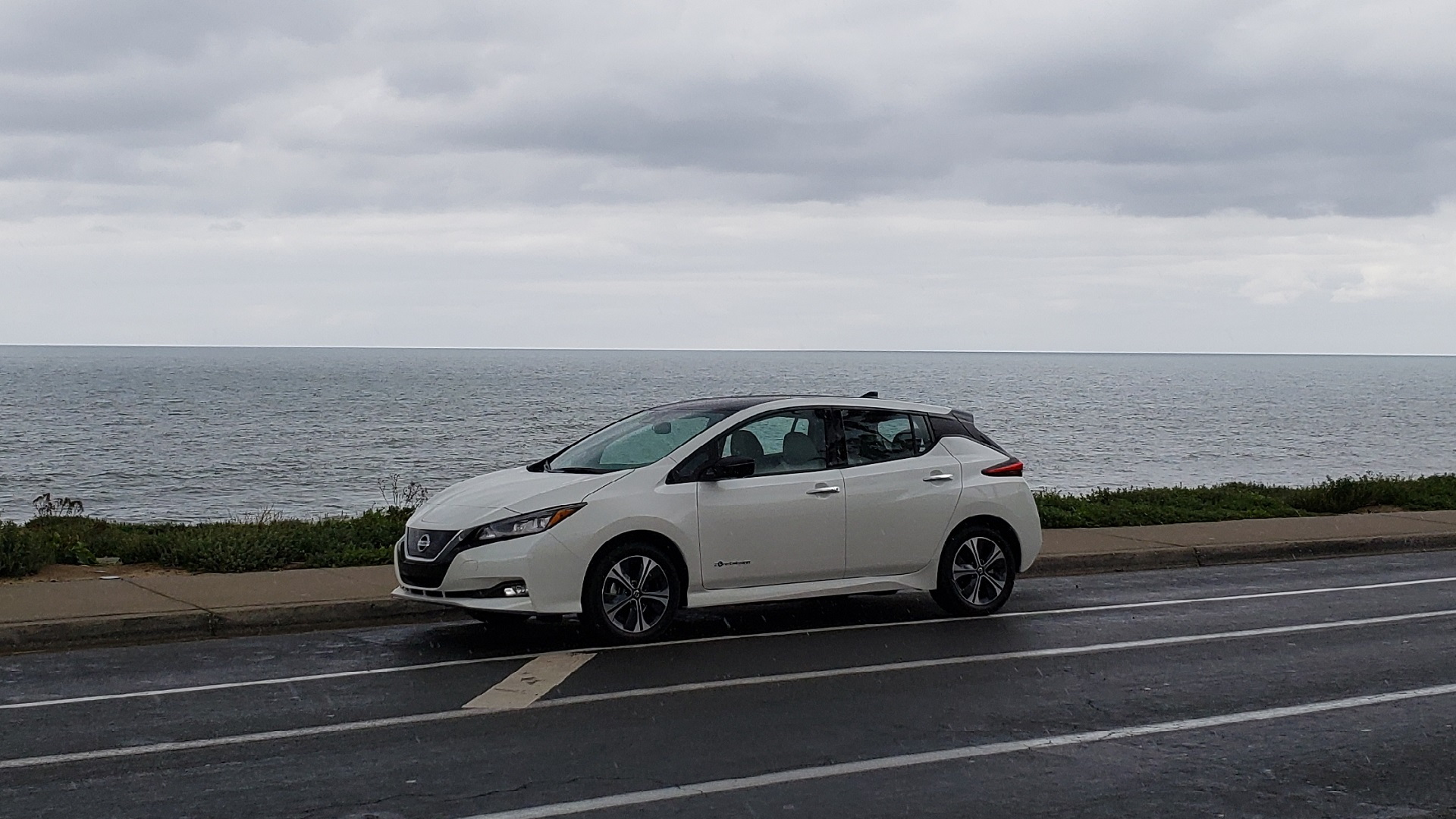 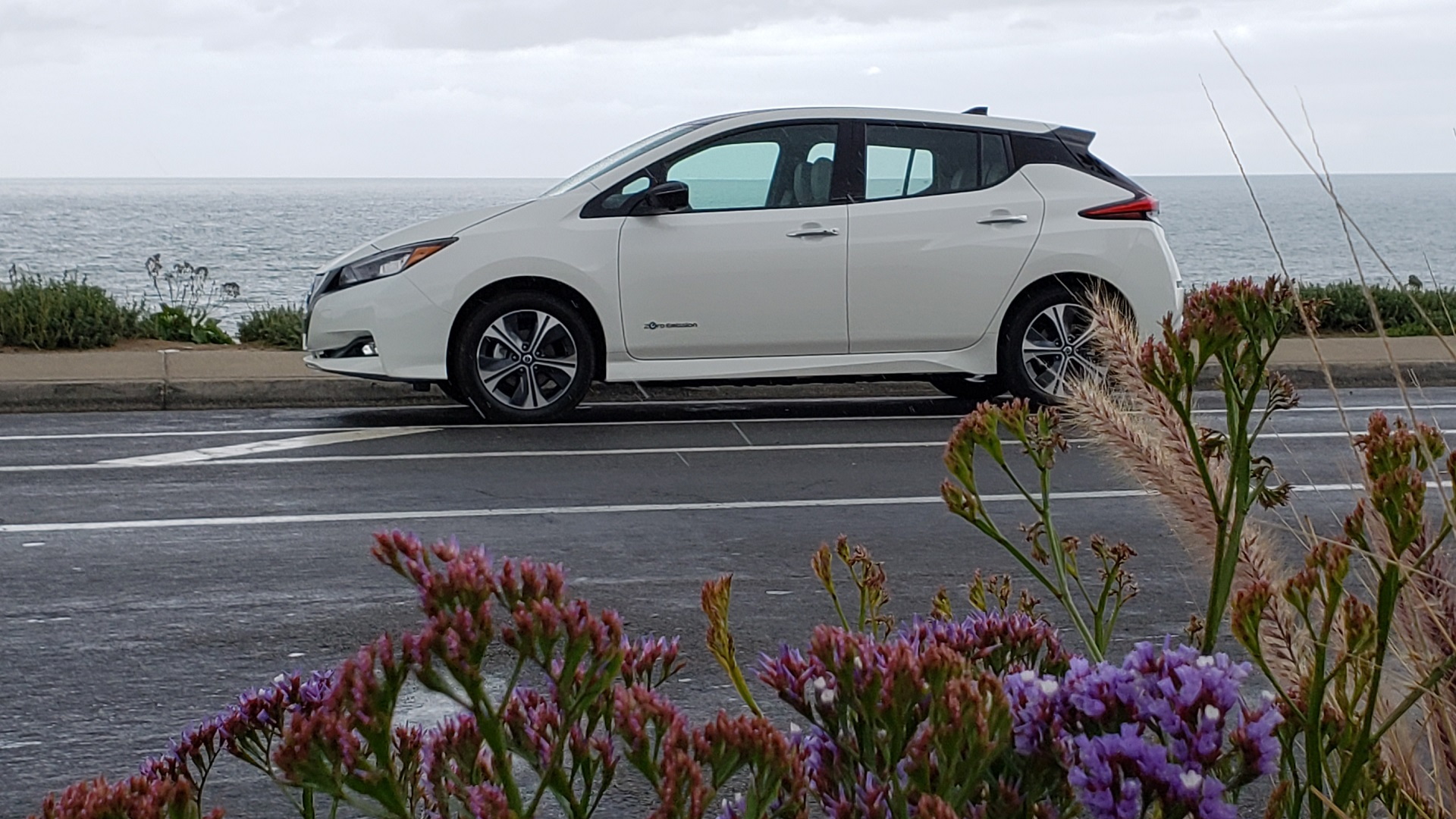 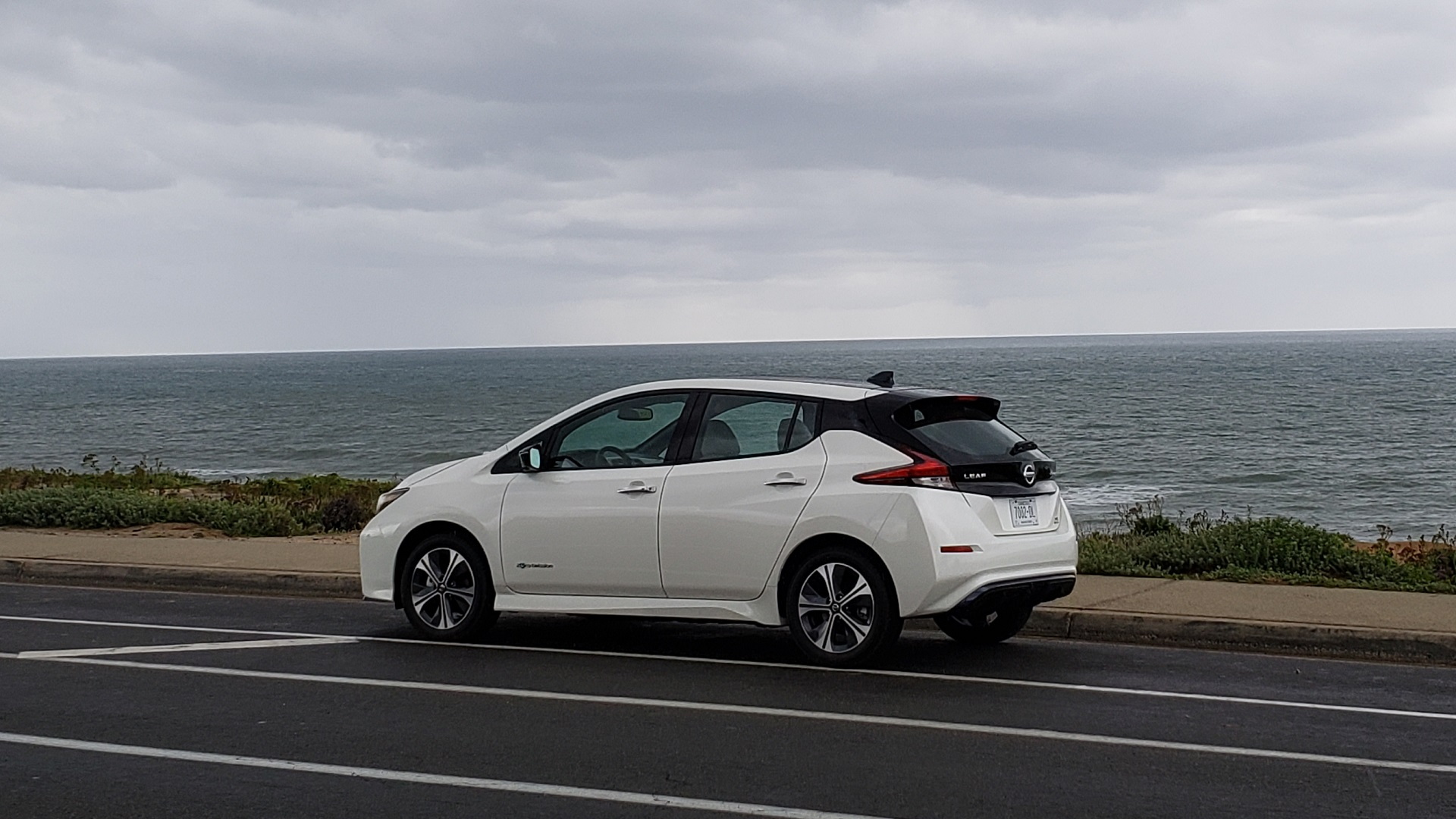 Nissan is entirely aware that honor may not last long. It all depends on sales of the pricier but undeniably more advanced Tesla Model 3. Nevertheless, the company will highlight that statistic as long as possible to underscore its decade of commitment to selling mass-priced electric cars.

Last week, in San Diego, the 2019 Nissan Leaf Plus was rolled out to the media. It’s the version that finally gives the Leaf up to 226 miles of EPA-rated range, something it’s needed since January 2015.

That was the month the Chevrolet Bolt concept was unveiled with a range of “more than 200 miles,” which turned out to be an EPA range of 238 miles in the Bolt EV that went on sale in December 2016.

Nissan has had nothing to equal that range—until now—so it is likely relieved that retail sales of the Leaf Plus will begin next month. Pricing should be released within days.

The Plus will sit side by side with the regular 150-mile Leaf. The longer-range Plus has a few extra features besides greater range, but you’ll have to look hard to tell the two apart.

Aside from a very small chrome “Plus” label below the trim grade badge on the tailgate and a blue lower front-bumper trim, the changes can’t be seen from outside the car. (In Europe and Japan, the highest-range Leaf is dubbed the “e-Plus,” but not in North America.) Inside, there’s an 8.0-inch central touchscreen rather than the standard car’s 7.0-inch unit.

Oh, and if you open the charge-port door, you’ll see an “e” on the cap—indicating an onboard CHAdeMO fast charger capable of charging at up to 100 kilowatts, rather than the standard car’s 50 kw.

The major change, of course, is a redesigned battery pack in a different housing. It uses slightly higher-density cells to provide 62 kilowatt-hours of energy capacity against the 40-kwh Leaf.

Along with the bigger battery comes a more powerful motor. It’s actually the same unit used in every Leaf since 2013, but the battery can deliver more power, so the software limits on maximum motor output have been raised.

The cells used in this latest Leaf battery are only about 3 percent more energy-dense than those in the standard car, the company said. That surprised us, so Nissan tasked battery engineer Nate Herbrandson with explaining just how Nissan managed to get 50 percent more capacity from a battery case just a bit larger than the one used for the 24-, 30-, and 40-kwh iterations of the Leaf.

Evolution of battery for 2019 Nissan Leaf Plus electric car

“Getting to 62 kwh was not a driving force” in the design of the battery pack, he said, until the need for 200-plus miles of range became apparent. Instead, we surmise, the layout was driven by lower cost, standardized production, and high volume.

To pack in more energy capacity, Herbrandson said, connections between cells are now made by laser-welding their tabs, removing the space required to accommodate a separate connector. The biggest contributor, though, was eliminating “dead space”—effectively empty air inside the shell.

The Leaf Plus pack uses modules with three cells wired in parallel rather than the previous design’s two cells, raising the total from 192 to 288 cells. The larger number of cells in parallel minimizes resistance in the interconnects, reducing battery heat under load.

All Leaf packs so far used a single module design for production simplicity. But in the higher-capacity pack, custom module shapes use every cubic centimeter of volume within the case to stuff in more cells.

Rumors that the high-capacity pack would have some form of active thermal conditioning proved to be wrong. It still sheds heat passively, and Herbrandson underscored more than once that the new module designs lower resistance, while the higher capacity allows less draw on each cell for a given power demand from the vehicle.

Because the redesigned pack is taller, the Leaf Plus rides 0.2 to 0.4 inches higher than the standard Leaf. Its suspension has been retuned for the heavier pack, and the door sills are slightly deeper. Again, though, only the most experienced owners of 2018 Leafs will notice the difference.

On the road, the 2019 Nissan Leaf Plus is pretty much what we expected: a more powerful Leaf with a longer range.

The ride is comfortable, the steering is adequate if a touch numb, and for the first time, it has ample passing power at any legal speed, including the high end of highway speeds. Off-the-line acceleration was good, but didn’t feel as punchy as that of the Bolt EV—though we’d have to test the pair side-by-side to confirm that impression.

One area in which some buyers will prefer the Leaf Plus to the Bolt EV is the seats. While seat comfort is highly individual, the narrow and thinly padded Bolt EV seats have been criticized. They were fine for us, but enough shoppers, testers, and owners have spoken up that it’s clear they’re not for everyone. The Leaf, on the other hand, has perfectly conventional seats that felt fine over several hours of driving.

As before, one area in which the Leaf shows its age—with underpinnings now in their ninth year—is the lack of telescoping adjustment for the steering wheel. It’s a little thing, and we were able to get our preferred driving position, but in a car with a price that will start somewhere north of $30,000, it’s a surprise.

As before, we liked Nissan’s e-Pedal strong regenerative braking option, and drove virtually all our miles using it. Introduced last year with the redesigned Leaf, it finally gives drivers the option of one-pedal driving, a calmer and more relaxing way to drive even in the most congested traffic.

In our eagerness to get on the road, we forgot to note down the rated range of the fully charged battery when we set out. Still, test routes on car launches tend not to be representative of day-to-day use—so our sole note on efficiency is that the 62-kwh 2019 Leaf Plus gets the same EPA efficiency rating as the 40-kwh 2019 Leaf: 112 MPGe. (Miles Per Gallon Equivalent, or MPGe, is a measure of how far an electric car can travel on the amount of energy contained in 1 gallon of gasoline.)

Leaf Plus vs Leaf vs the rest

Nissan points out that with the addition of the Leaf Plus, it now has a pair of electric-car variants that it says will compete with every EV out there below the Tesla Model S and Model X.

CONSIDER: 2018 Nissan Leaf: does it pioneer the 'mid-range' electric car?

Nissan suggests the regular Leaf will find buyers among those with shorter commutes, who will recharge the car on average twice a week. Leaf Plus buyers will be those with longer commutes, more highway miles, and those who make more trips a day. They’re likely to recharge every week or even 10 days, based on the company’s data.

For buyers who’ve made the decision to go electric, the Leaf remains a safe choice. Nissan’s certified electric-car dealers have more experience than almost any other brand’s outlets—Chevrolet is the exception—and the company is in the electric-car business for the long haul. For the moment, most new fast-charging sites include at least one CHAdeMO connector along with one or more CCS cables.

But while we enjoyed our time with the long-range Leaf Plus, we struggled to find a single superlative that applied to the new model. Other models have more glamour (Tesla), more range (Hyundai), or a more common fast-charging standard (Chevy). It’s a good electric car, but it’s no longer a ground-breaking one.