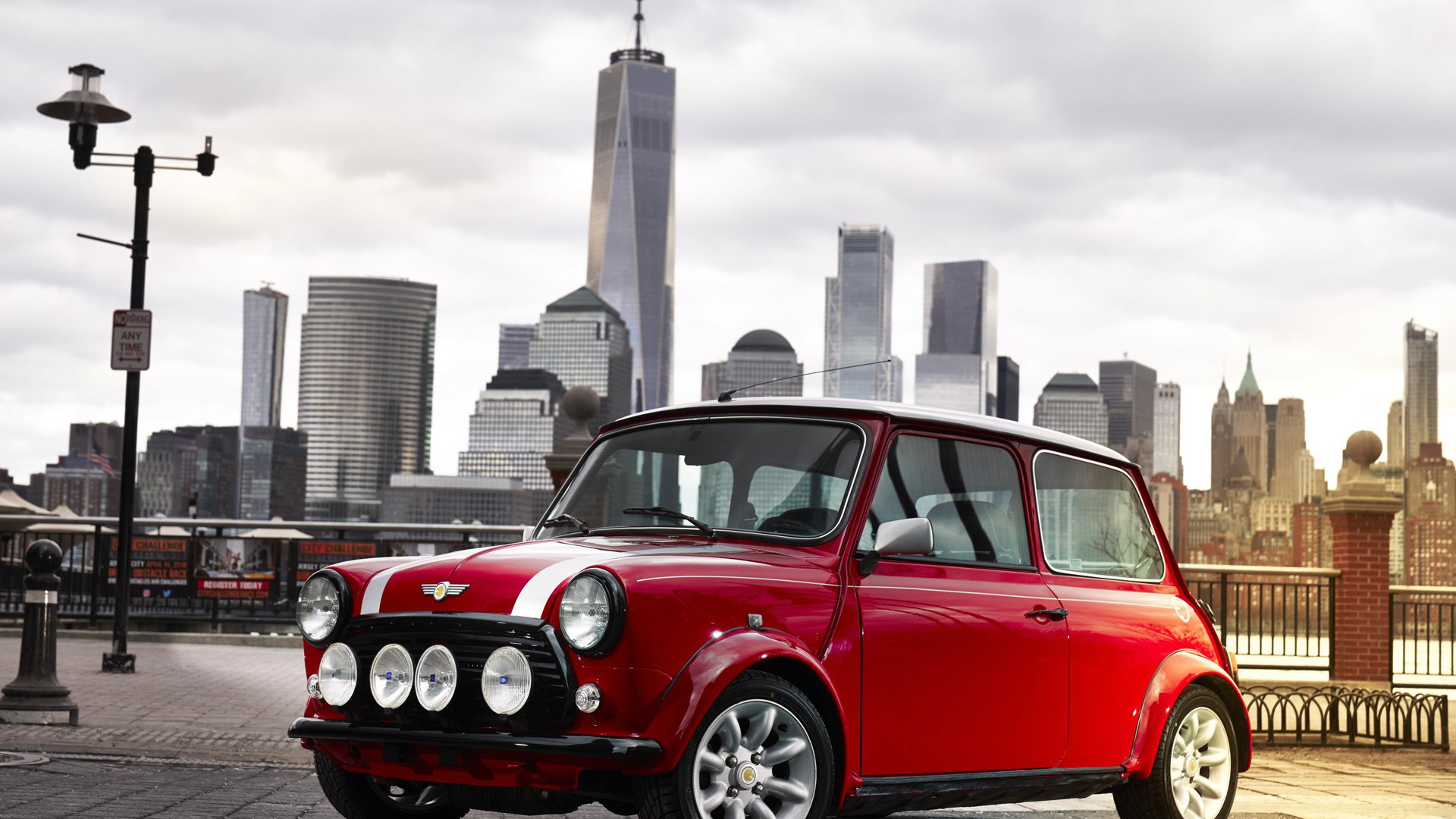 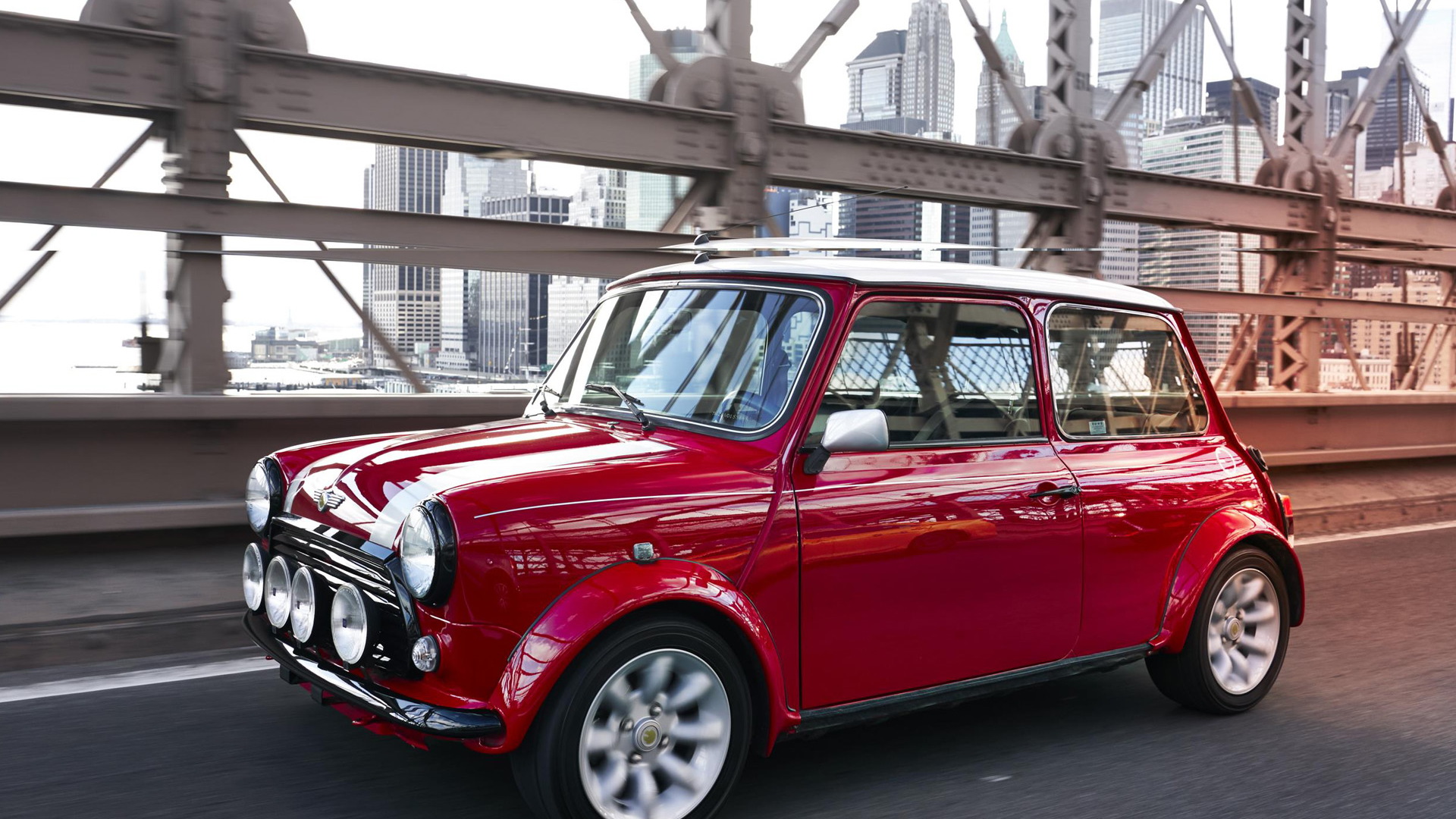 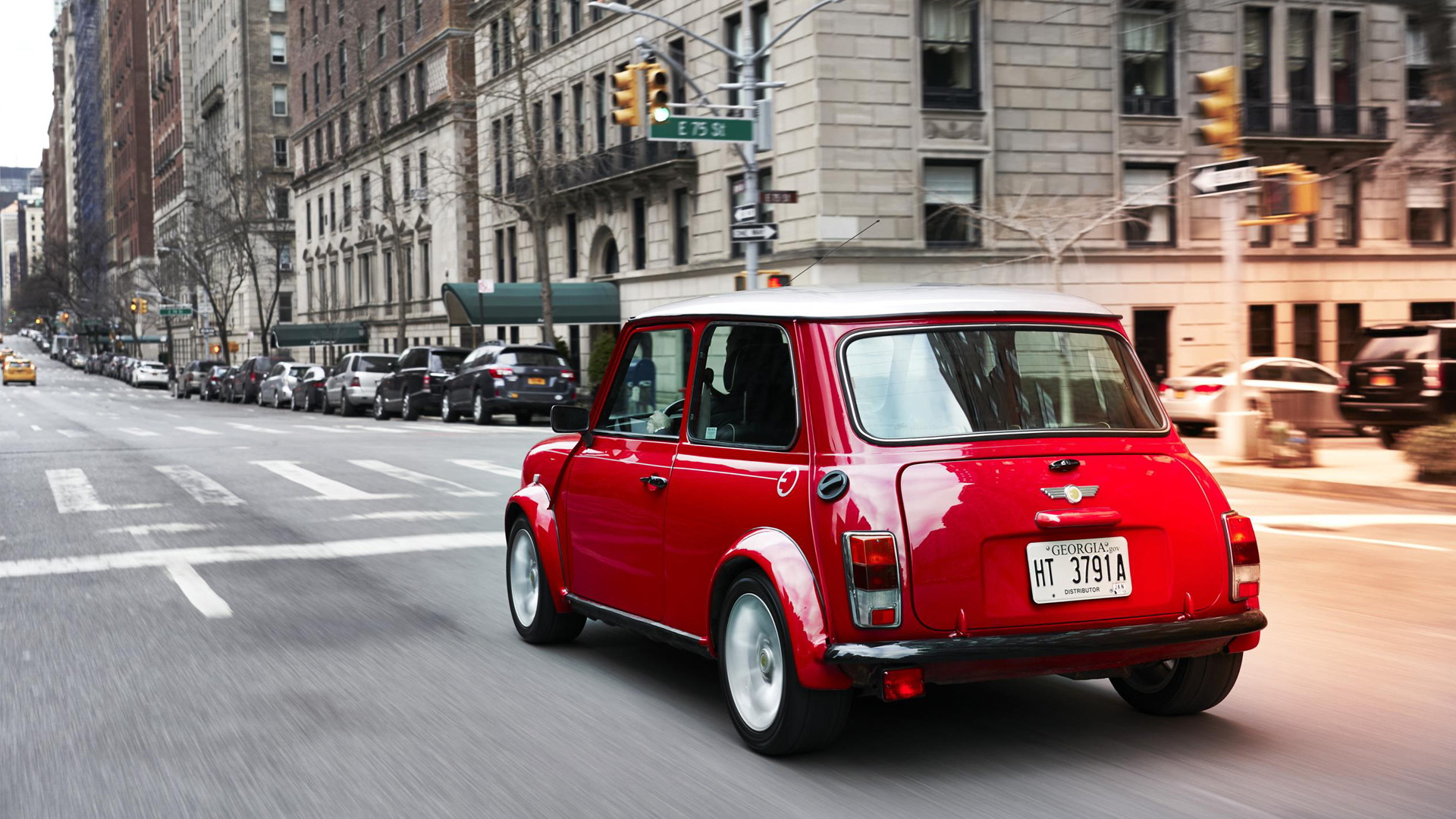 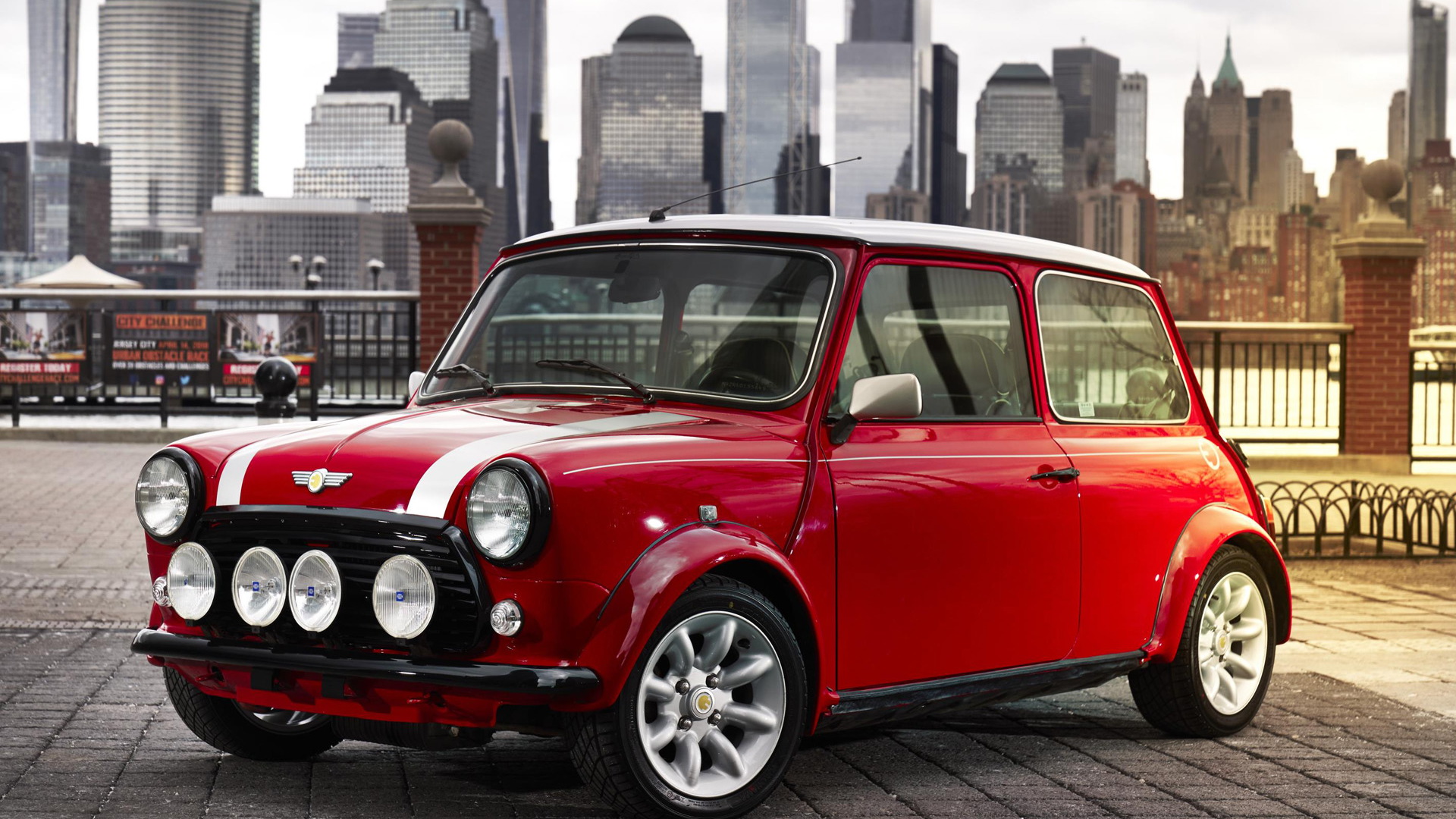 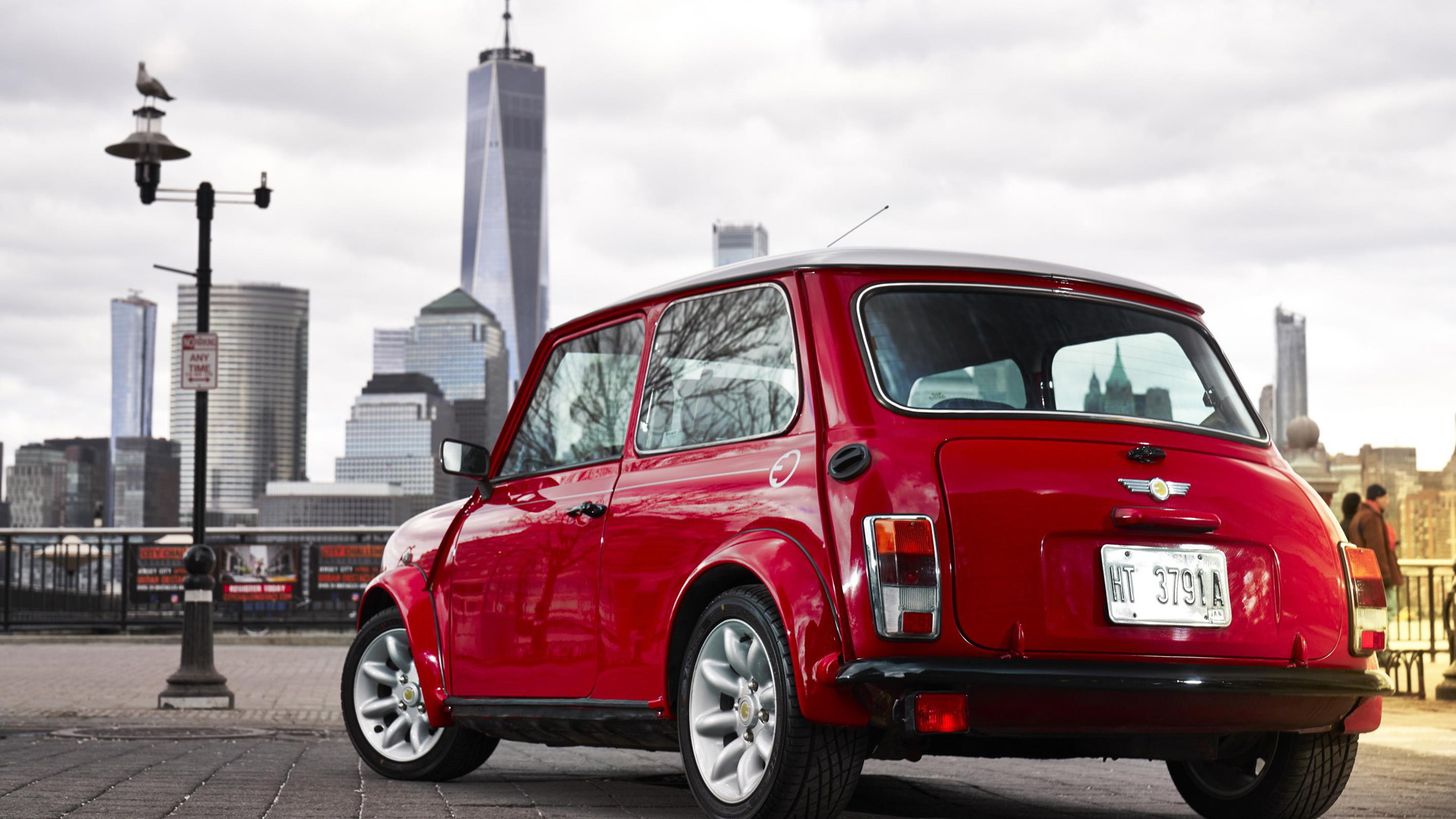 With a new, all-electric Mini E set to arrive in dealerships in a year or less, BMW wants to highlight the idea of a Mini Cooper powered by batteries.

That's what led it to display an "old Mini" converted to electric power at a reception before last week's New York auto show.

Sadly, the car wasn't on display at the show itself because—as booth staff explained—it was privately owned, not a company project.

In its press materials, the company didn't detail the electric powertrain, though we doubt it shares any components with the upcoming Mini E that's likely to launch as a 2019 model.

The red-and-white classic 1998 Mini Cooper—just 10 feet from stem to stern—sported the yellow plug logo seen on the original fleet of Mini E test cars in 2009, which will likely reappear on next year's production car.

A brief drive report from the British magazine Autocar, however, provided considerably more detail about the electrified classic Mini.

A 28-kilowatt (38-horsepower) electric motor connects to the original 4-speed gearbox via pulleys, and the range is said to be about 65 miles from 30 lithium-ion cells using iron-phosphate chemistry, of unspecified capacity.

They're mounted behind the front seats, and the car's rear bench seat was removed, turning it into a two-seater like the cars of the 2009 Mini E test fleet that gave BMW its first real-world data on how drivers use and charge battery-electric vehicles.

According to Moritz Burmester, who modified the car, the team tossed out the car's 1.3-liter "A" Series 4-cylinder engine, exhaust system, and gas tank as well as the rear seat.

Top speed is said to be 75 mph, and Burmester said the car takes 4 hours to charge using the British equivalent of a 240-volt Level 2 charging station.

Autocar raved about the Classic Mini Electric's acceleration: "As soon as you hit the throttle pedal, the Mini’s electric motor powers it ahead as if there were no tomorrow, while the engine buzzes in a manner that reminds of Luke Skywalker’s X-Wing Fighter."

The car also retains the go-kart handling and cornering the original was known for, the same combination that led it to beat cars of twice its weight and power in classic Monte Carlo Rallys and track events throughout the 1960s, to the shock of competitors and the delight of the crowds.

But this isn't the first classic Mini powered by batteries, though it may be the first powered by the lithium-ion cells that have four times the energy density of the lead-acid batteries used for more than 100 years as the main storage technology for cars.

In 1966, The London Electricity Board filled the back of an Austin Mini Countryman with lead-acid batteries and tested the car extensively (see video below). That prototype still survives today.

The Mini Electric Concept, a lightly disguised version of the battery-powered Mini that will go on sale for the 2019 model year, debuted at the Frankfurt auto show in September and made its U.S. debut in Los Angeles two months later.

With 200 miles of range or more, the electric Mini will follow the low-volume but much-loved Mini E development fleet, launched in 2009.

Now largely withdrawn from service, the Mini E was something of a kludge, with a large battery pack occupying the space previously used for a back seat.

The Mini Electric Concept shows a rough approximation of the car that will be built in the main Mini assembly plant in Oxford, England, starting this year.

It is the first new battery-electric model to be launched by BMW since the 2014 BMW i3, and it will be followed in a year or so by the 2020 BMW iX3, an all-electric version of the company's popular X3 compact crossover utility vehicle.