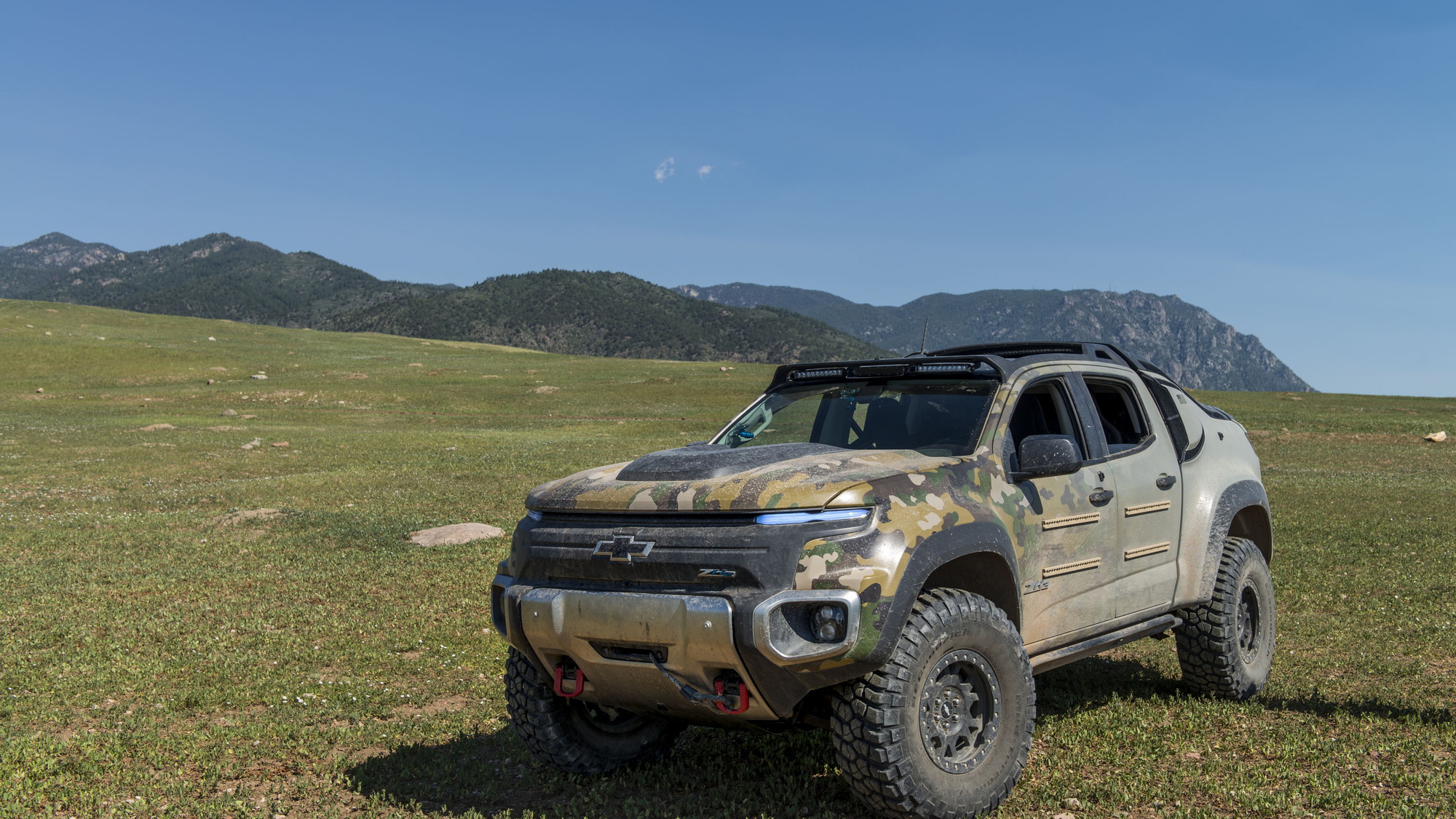 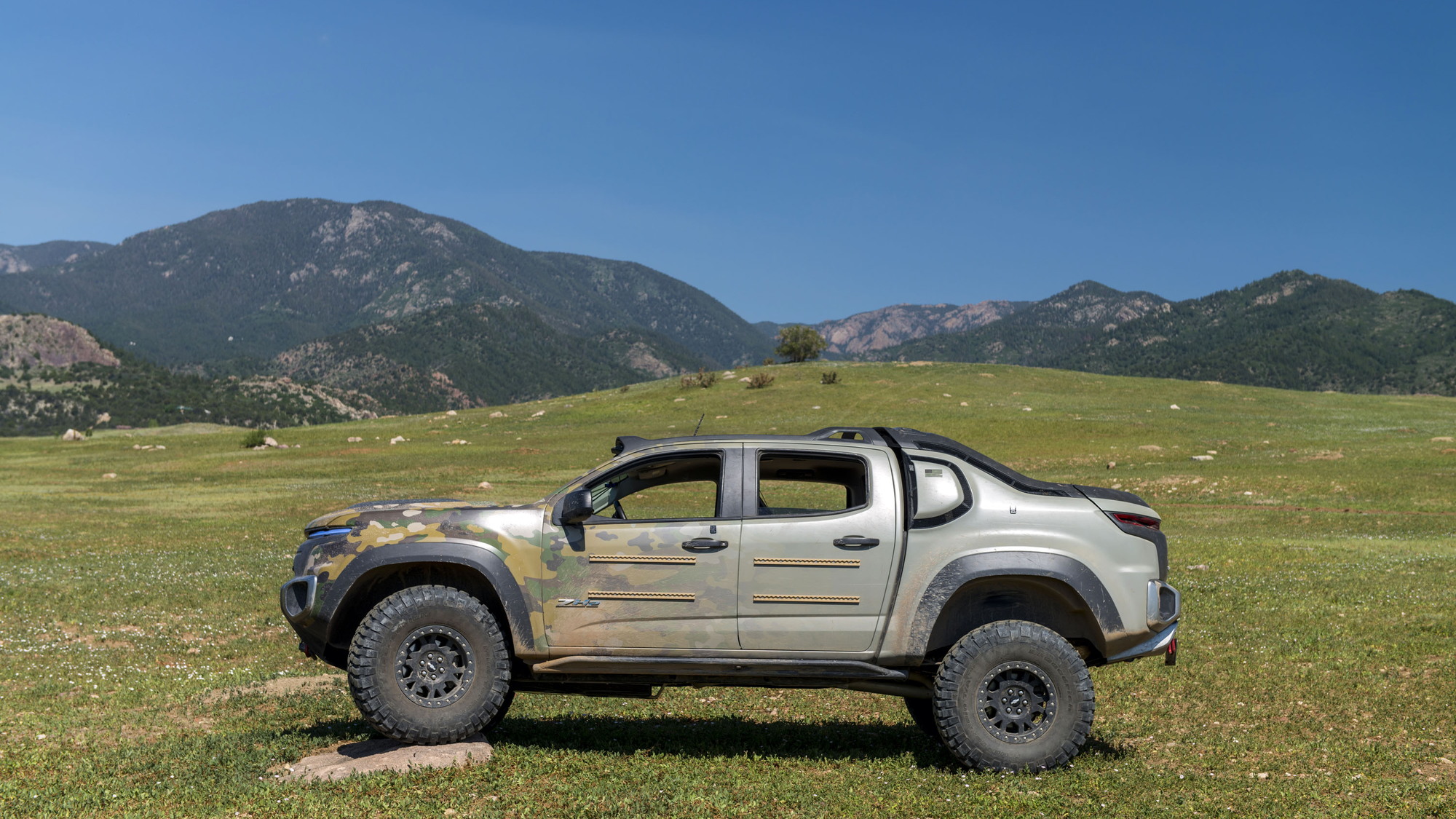 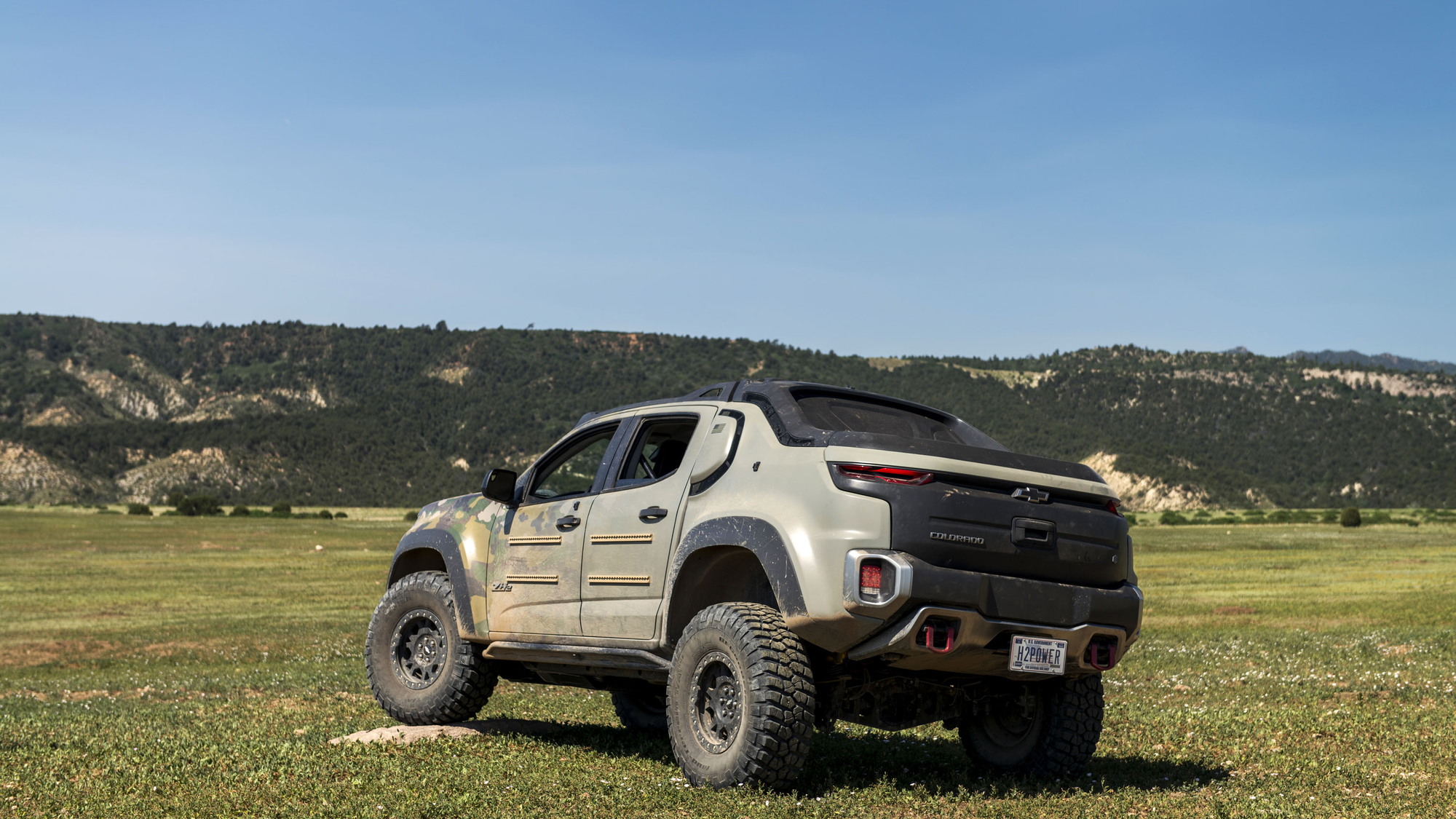 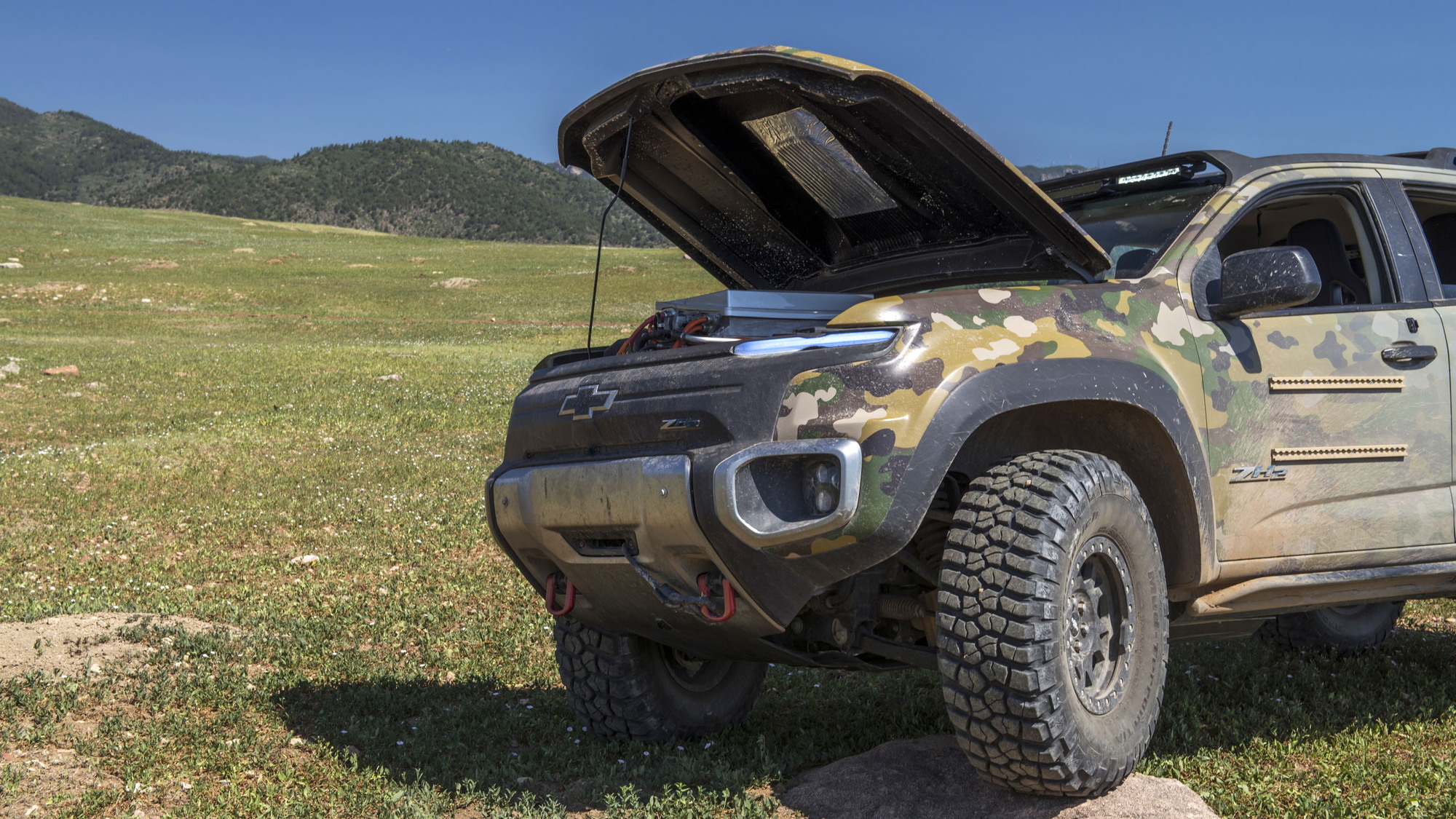 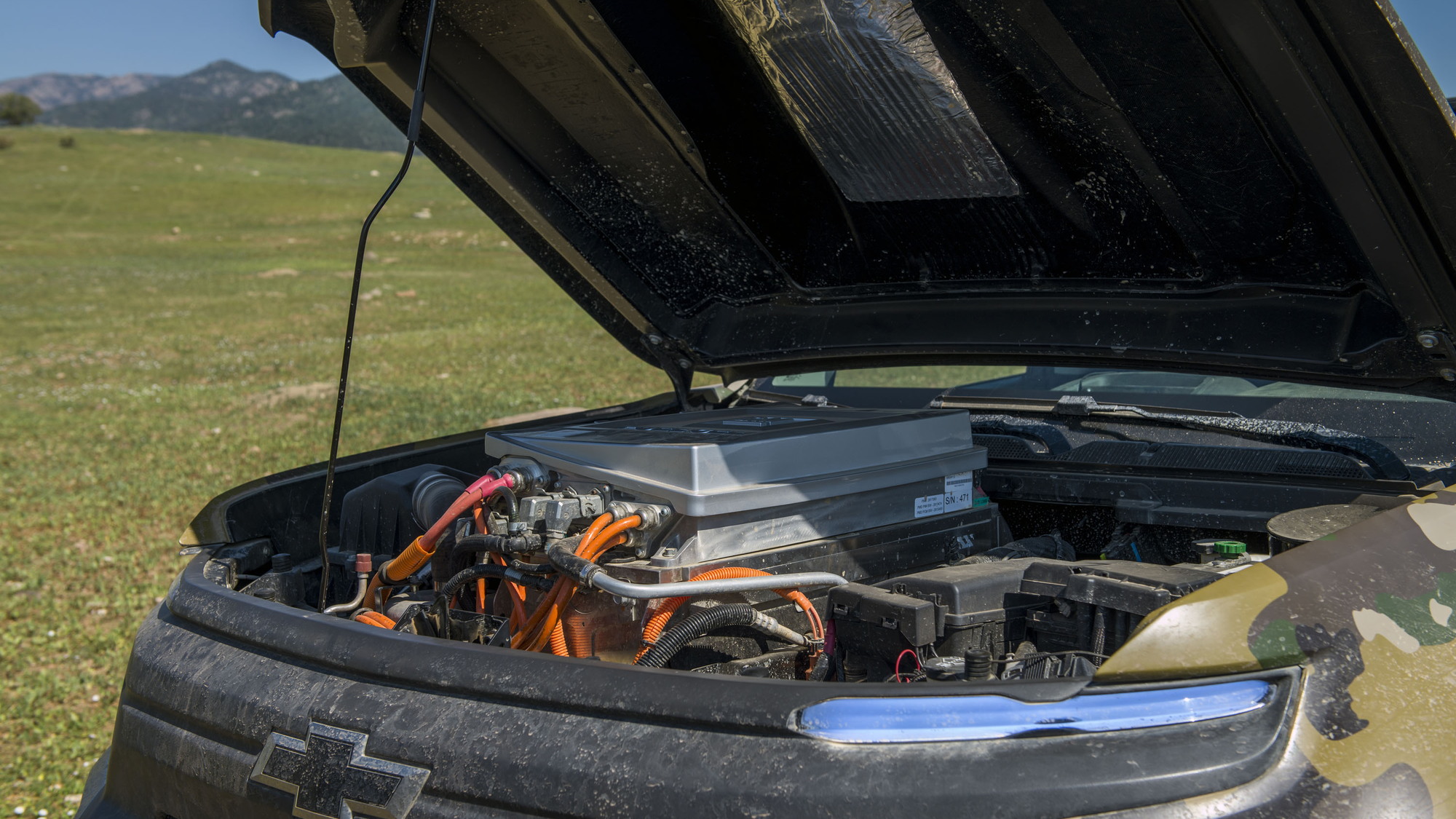 Olive drab isn't the only green thing in the U.S. Army.

Currently undergoing testing at Fort Carson in Colorado, the Chevrolet Colorado ZH2 hydrogen fuel-cell vehicle illustrates the unlikely intersection between eco-friendly powertrains and the demanding needs of a vehicle that may be deployed to a war zone.

The Colorado ZH2 is a collaboration between General Motors and the U.S. Army Tank Automotive Research, Development and Engineering Center (TARDEC), but its roots are a little more humble.

Underneath its show-truck body, the ZH2 is a shortened Colorado ZR2 off-road truck with a version of the experimental Chevrolet Equinox hydrogen fuel-cell test-vehicle's 177-horsepower electric motor and proton-exchange membrane fuel-cell stack.

It's beefed up for military use with a suspension lift and 37-inch BFGoodrich Mud-Terrain tires (perhaps the only time you'll read those words together on Green Car Reports).

GM and TARDEC are quick to point out the benefits of fuel-cell propulsion in a military vehicle: silent and quiet running to sneak up on or away from a nasty situation, a quiet and efficient electric generator, water vapor emissions that can be converted to re-ionized potable water, and the ability to extract hydrogen from military-grade JP8 fuel.

We rode along on a short, rugged route normally used for military training at Fort Carson. In the shadow of Pike's Peak, the foothills of the Rocky Mountains provide a rough facsimile for what soldiers might encounter in rather more desolate places the ZH2's satellite radio doesn't reach.

Naturally, the big tires and flexible suspension made short work of boulders and streams, but what really impressed us was the ZH2's nearly silent operation.

At elevation, the compressor has to work a little harder to force air into the hydrogen propulsion system, but even it makes little noise. Compared to the rattling diesel-fueled Humvees the army currently uses, the ZH2 is a breath of fresh, quiet air.

Those Hummers are often used to lug diesel generators that make just as much racket. Tucked away behind a hinged lid in the ZH2's bed is an electric generator that TARDEC says can easily power its latest communications equipment.

Of course, there are some drawbacks to the ZH2—and those are just what TARDEC's year-long test spread across several military bases are hoping to both uncover and improve upon.

For one, hydrogen is highly combustible when ignited by, say, sniper fire. In the ZH2, GM told us that the heavily protected tank has been designed to vent hydrogen up and away from the vehicle if its tank's integrity is compromised.

There's also the limited driving range of the ZH2, which TARDEC's representatives told us has proven to be highly variable.

Florida's dunes had the electric motor working especially hard, which dropped the ZH2's range to around 90 miles. But in Colorado, the army has seen about double that.

Additionally, there's no existing infrastructure for hydrogen on most military bases.

At Fort Carson, the Army currently sources hydrogen to power the ZH2 from the National Renewable Energy Laboratory’s (NREL) Wind Test Site near Golden. That's more than an hour from the base.

However, the Army can extract hydrogen from its standard-issue JP8 fuel—though that requires energy to run what are effectively refineries. That could make hydrogen a feasible fuel source for not only vehicles but generators that could provide enough electricity to support an entire remote base.

Given GM's intention to have a hydrogen fuel-cell assembly plant up and running by 2025, a lucrative defense department contract seems inevitable.