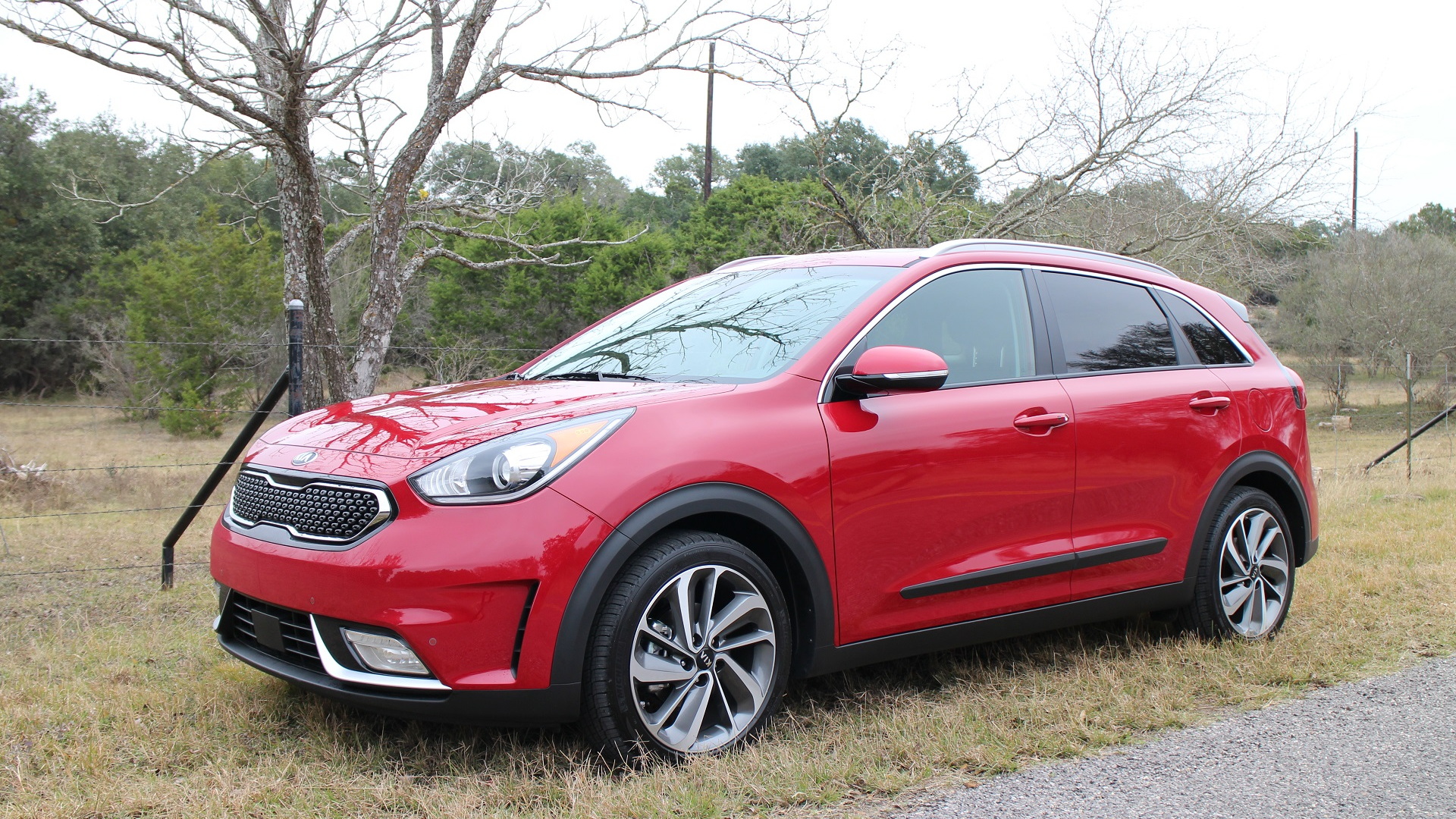 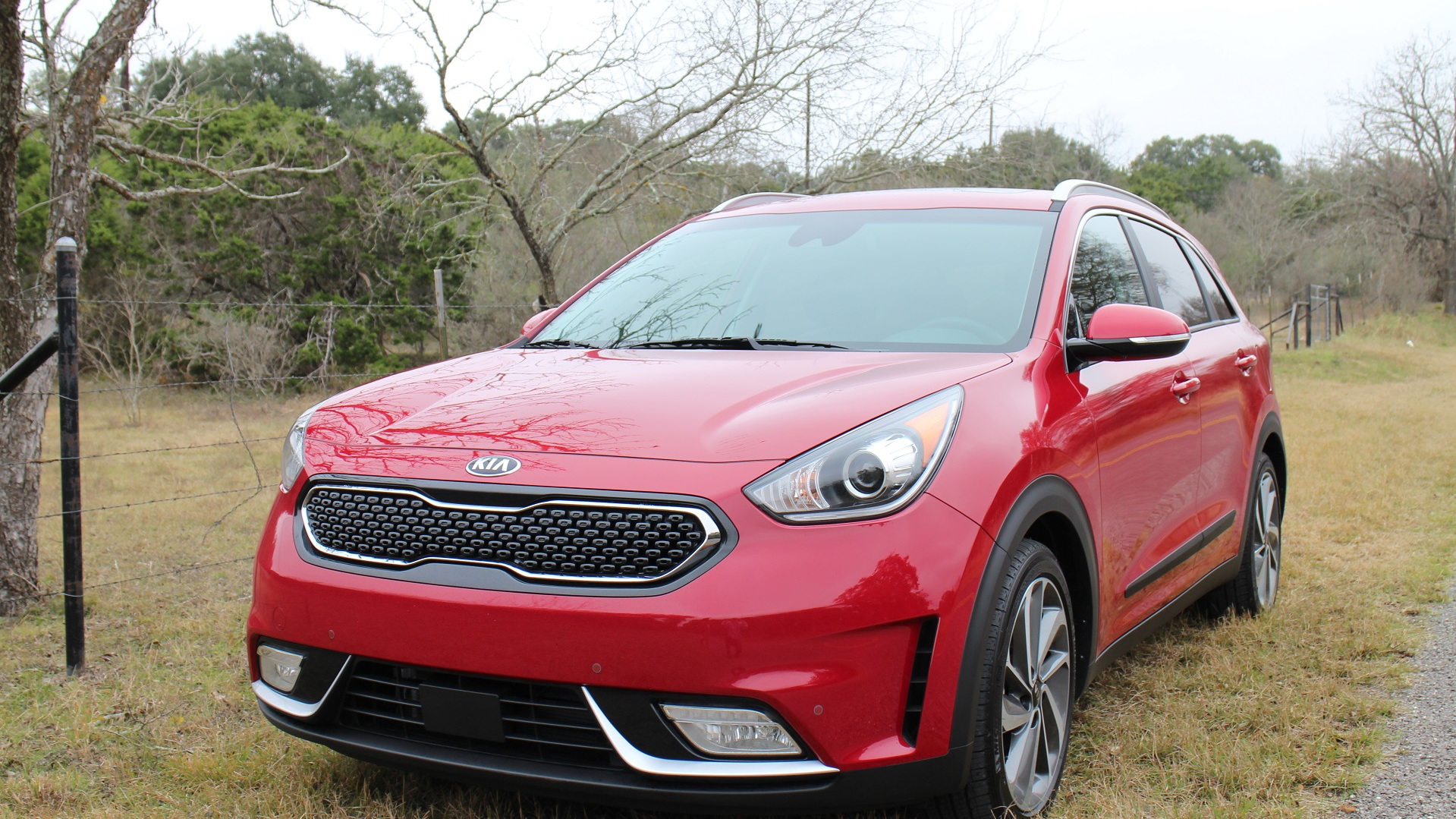 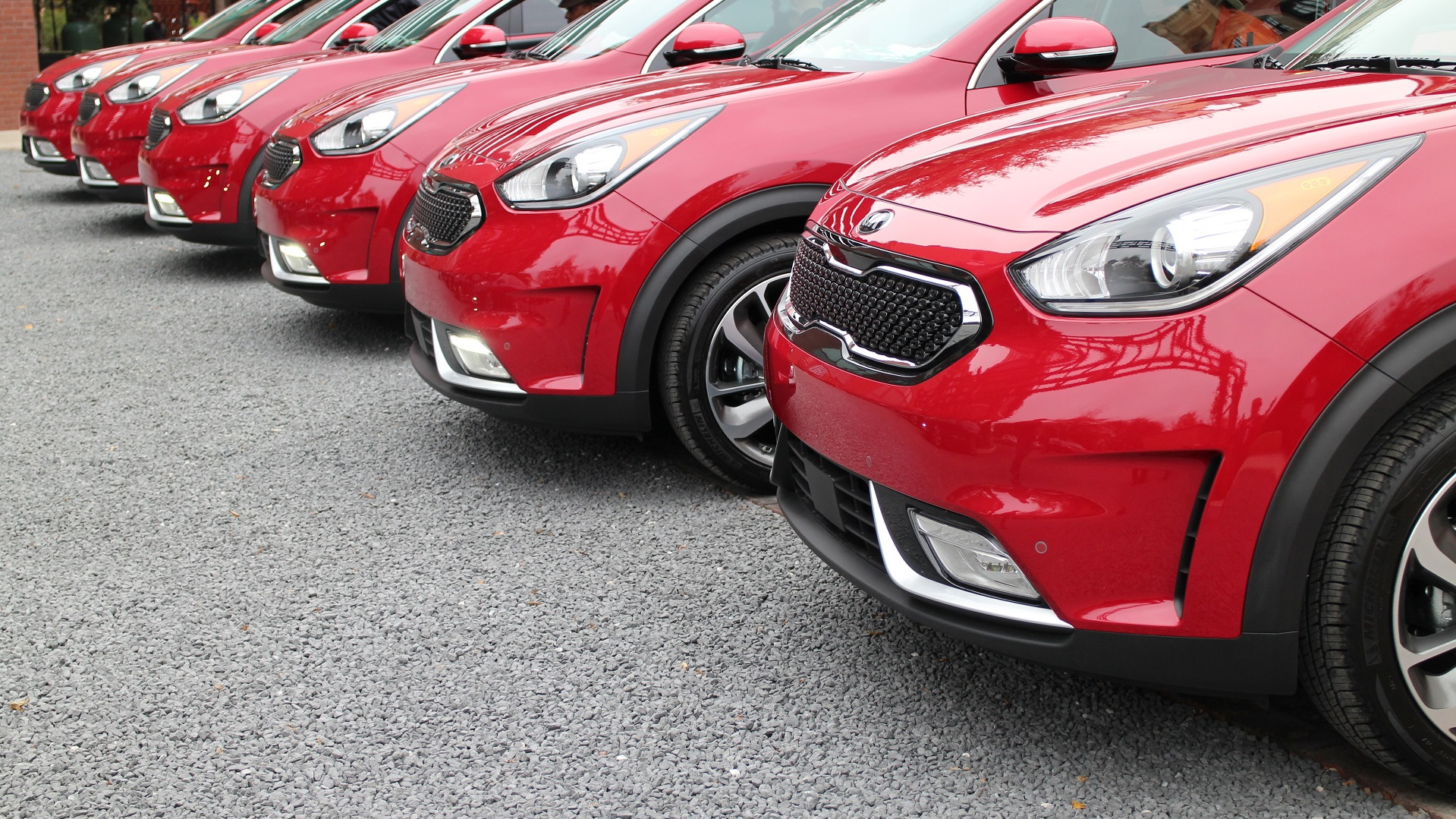 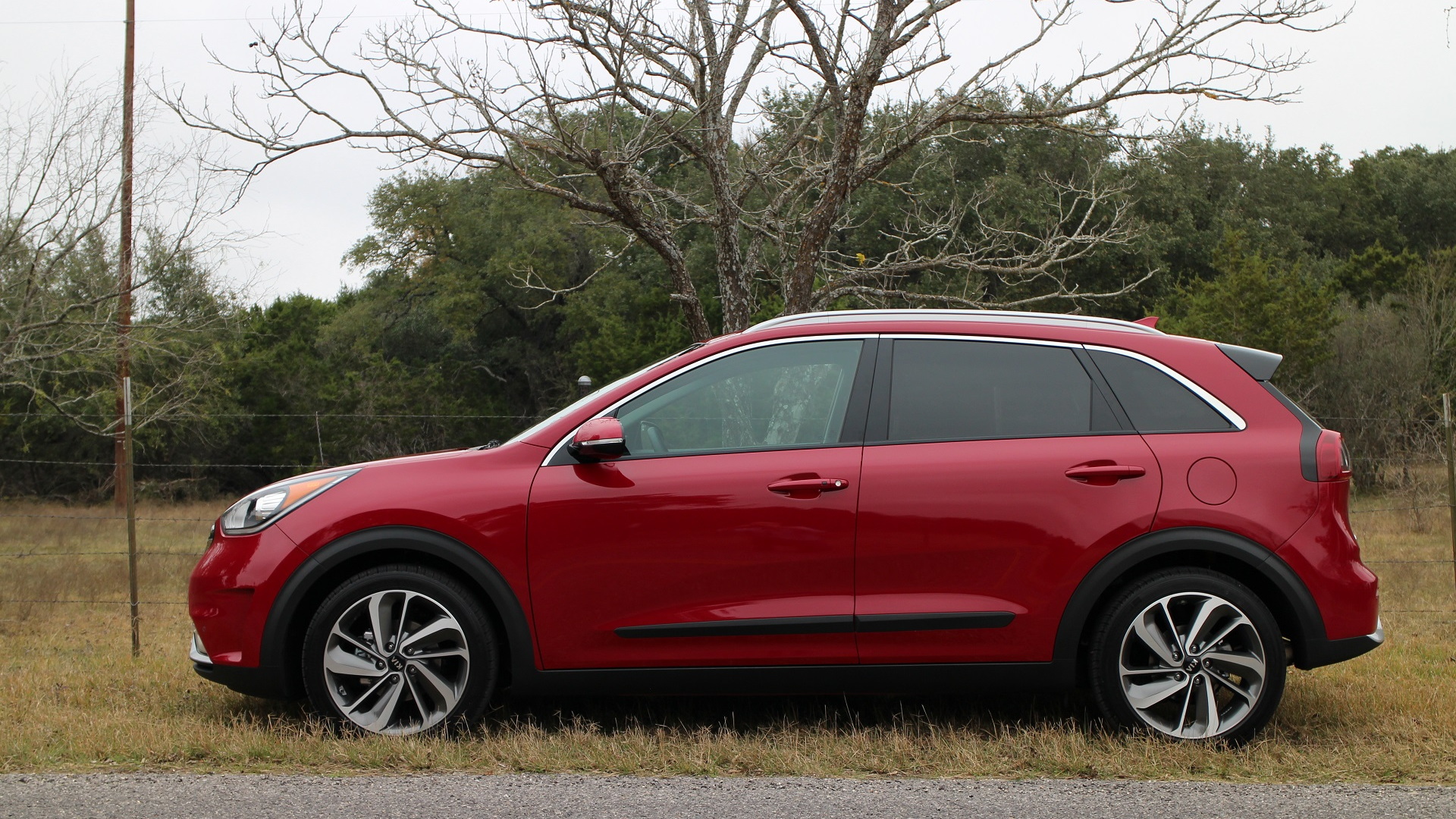 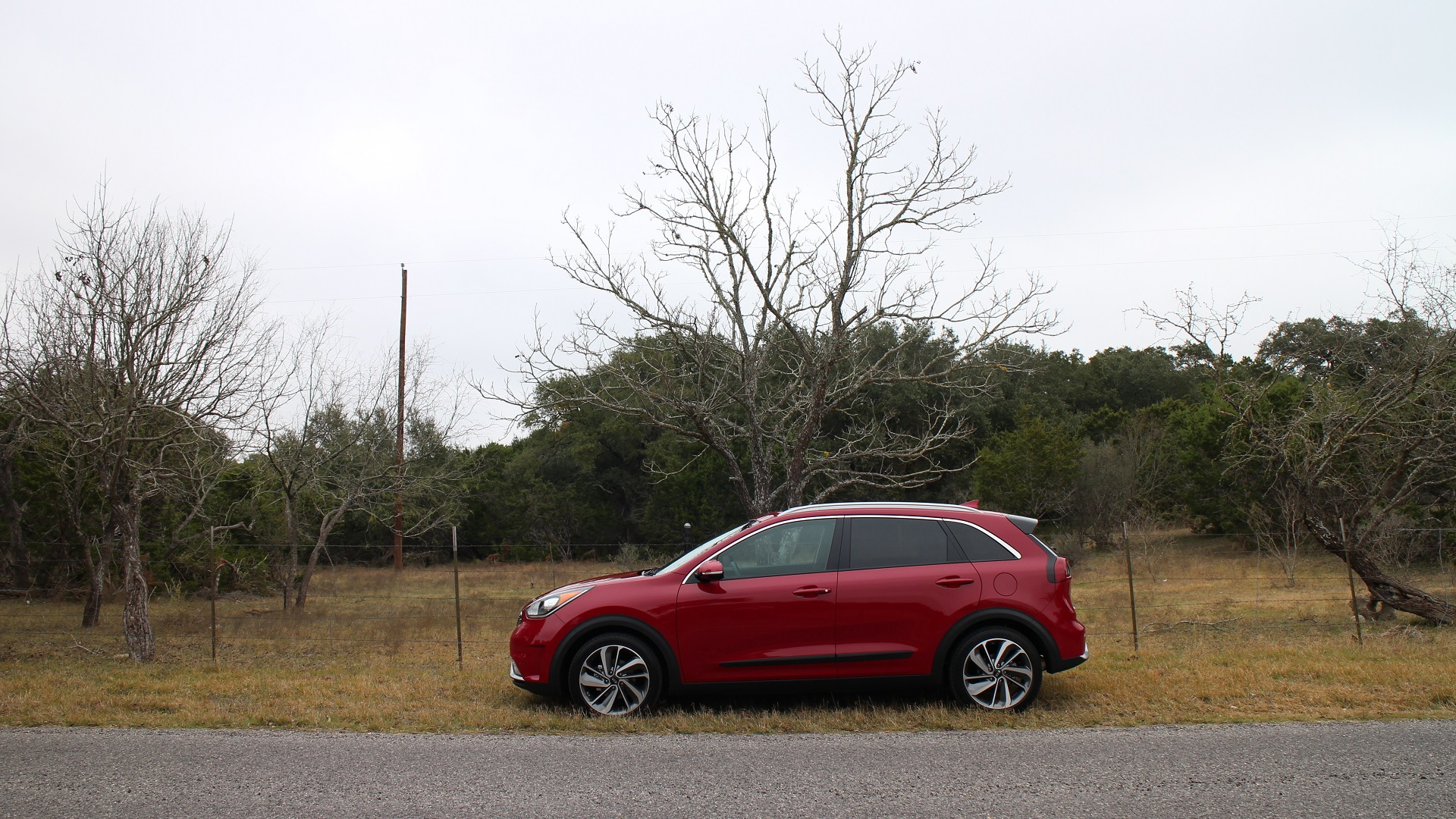 According to its maker, the 2017 Kia Niro is the first "crossover hybrid vehicle" sold in the U.S.—but what does that really mean?

We drove150 miles in two different versions of the top-of-the-line Niro Touring model two weeks ago, and concluded that the Niro represents an interesting package with some pluses and minuses.

Our drive at the launch event was broken into three segments of 50 to 60 miles apiece, each with a different mix of hills, country roads, and highway travel.

At the end of the day, we decided that the Niro is really an old-style wagon, not a crossover utility vehicle, because it offers neither all-wheel drive nor SUV-like ground clearance.

We also concluded that while it could be very fuel-efficient, the Niro is far more enjoyable to drive in the peppier Sport mode rather than the default Eco setting.

Using Sport mode is likely to cut real-world gas mileage to some degree—and perhaps a lot.

Numbers first: there are actually three different sets of EPA fuel-economy ratings for the Niro, depending on which trim level you choose.

The stripped-down Niro FE model is rated at 52 mpg city, 49 highway, and 50 combined. It's basically a Niro LX minus its roof rails, keyless ignition, rear-seat center armrest, and LED taillights—dropping just enough weight to squeak it over that crucial 50-mpg combined rating.

The LX and EX models, which are likely to be the volume sellers, come in just below that, at 51 city, 46 highway, and 49 mpg combined. But fuel efficiency takes a drop for the high-end Touring models that we tested, at 46 city, 40 highway, and 43 mpg combined.

On our three test-drive legs around a surprisingly chilly San Antonio—all using a mix of Eco and Sport modes—we recorded fuel-economy figures of 34.7 mpg, 41.7 mpg, and 45.7 mpg in models with a 43-mpg combined rating.

The first of those is considerably lower than the 10 or 12 percent variance from the combined rating that most hybrid owners will accept. To be fair, though, it included climbing into the mountains around the city.

The third number was descending back down those same mountains, and corresponding higher than the combined rating.

Visually, the Niro blends crossover design cues—black wheel-well and sill accents, a skid plate on the rear bumper—with a shape that would be a perfectly conventional wagon, if there were a Niro sedan to spawn it (there isn't).

Inside, the cabin is wide for a car based on underpinnings from a subcompact, and four adults will fit with ease, though rear-seat riders may find the seat-back reclined at more of an angle than those in taller, more upright crossovers.

On the road, the Niro combines a driver's seat about 2 inches higher than a passenger car with the lower ground clearance of a regular wagon, so it holds the road like a car, not a taller utility vehicle.

Kia says the front-seat frames used in the Niro are based on those from the pricier Optima mid-size sedan. We found them comfortable and sufficiently adjustable to handle drivers up to 6-foot-6.

Load space, at 19.4 cubic feet with the rear seat up and 54.5 cubic feet folded down, is slightly less than in the tall, boxy Kia Soul or the larger Kia Sportage crossover.

But the rear seat folds almost flat, and putting heavy objects on it pushes it down to horizontal, making for a long load floor.

And the long passenger compartment means the rear doors are long too, making it easier to get into the rear seats than in some crossover rivals.

The Niro's powertrain has a distinct Jekyll-and-Hyde personality: it's just slow and sluggish in the default Eco setting—which is the one you'll probably need to use to meet or beat those EPA ratings.

Eco mode keeps the engine in high gears at low revs as long as possible, for minimal fuel consumption. Flooring the accelerator does increase the car's speed, but not very fast.

Pull the console-mounted shift lever to the left, however, and the car flips into its Sport mode, which remaps the throttle response, transmission shift points, and even the steering.

Choosing Sport mode often causes the gearbox to downshift immediately to a lower gear, and its engine response is much peppier, though we felt little if any difference in the steering between modes.

Sport mode turns the Niro from a slowish compact car into one that's at least competitive in fast-moving traffic, when the rest of its virtues emerge.

In the end, we concluded the Niro is a good example of a kind of car that's all but vanished from the U.S. market: the front-wheel-drive wagon.

The hybrid powertrain likely gives it real-world fuel economy of 40 mpg or more, depending on which mode you choose and how you drive.

It's almost a more fuel-efficient competitor to the one compact wagon left on the market, the Volkswagen Golf SportWagen—and it likely delivers much better fuel economy too.

Except that, this year, the Golf wagon can be ordered with all-wheel drive as an option.

And that's our other grumble about the Niro: the lack of all-wheel drive means an increasing number of buyers won't consider it in climes with actual winter weather.

It's not a crossover, in our view, if it doesn't offer AWD and higher ground clearance.

(Though if GM markets the 2017 Chevy Bolt EV hatchback as a crossover, have we gone post-factual in car categories?)

We liked the Niro, and we look forward to testing it for a longer period to get a better sense of its real-world fuel economy.

For far more detailed information on all aspects of the 2017 Kia Niro, see the full review on The Car Connection.

Kia says a plug-in hybrid version of the Niro will join the current conventional-hybrid model at the end of 2017.

It will have a larger 8.9-kwh lithium-ion battery pack, its electric motor will be more powerful, and it's expected to get an EPA rating of 25 or 26 miles of all-electric range.