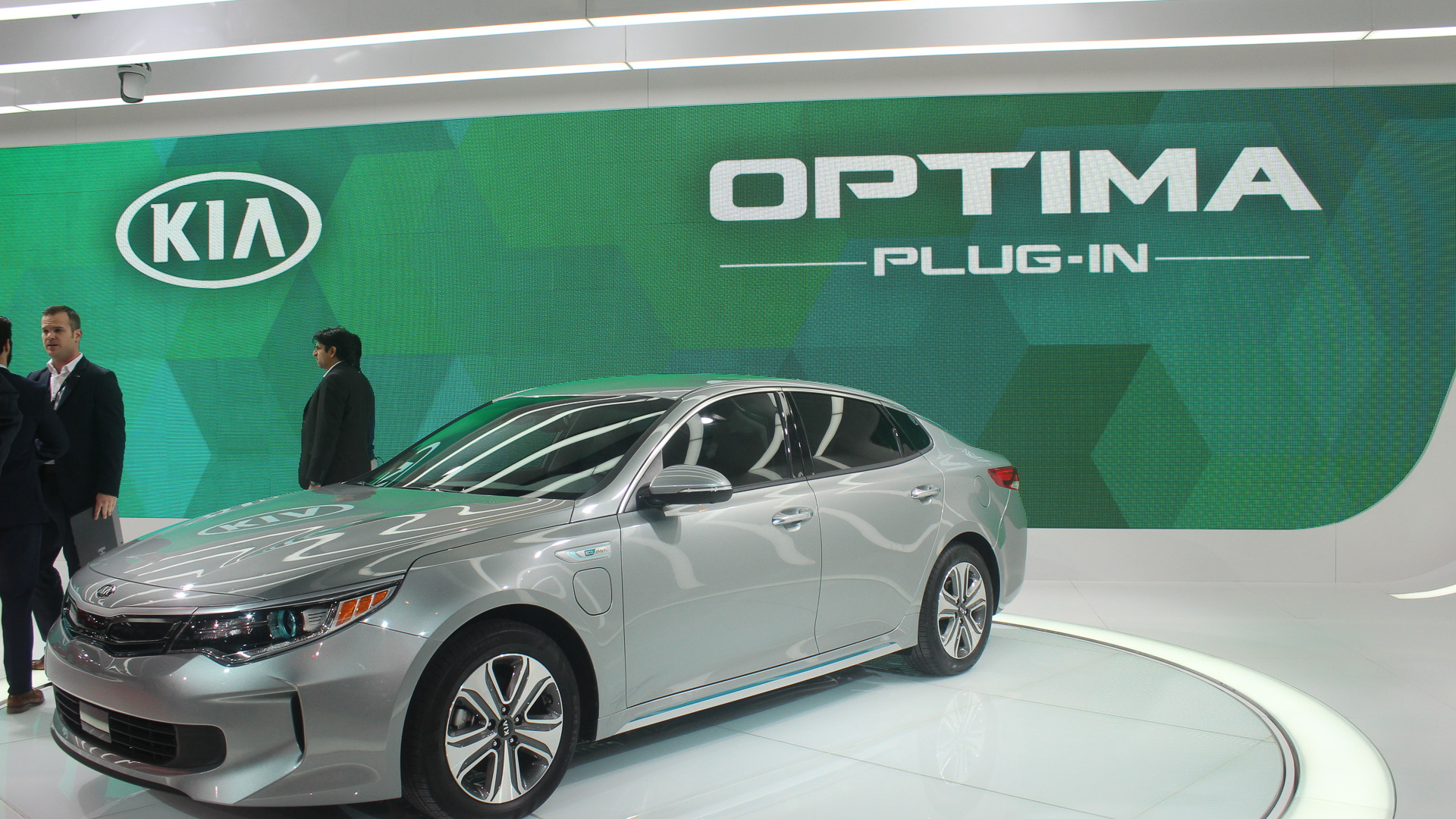 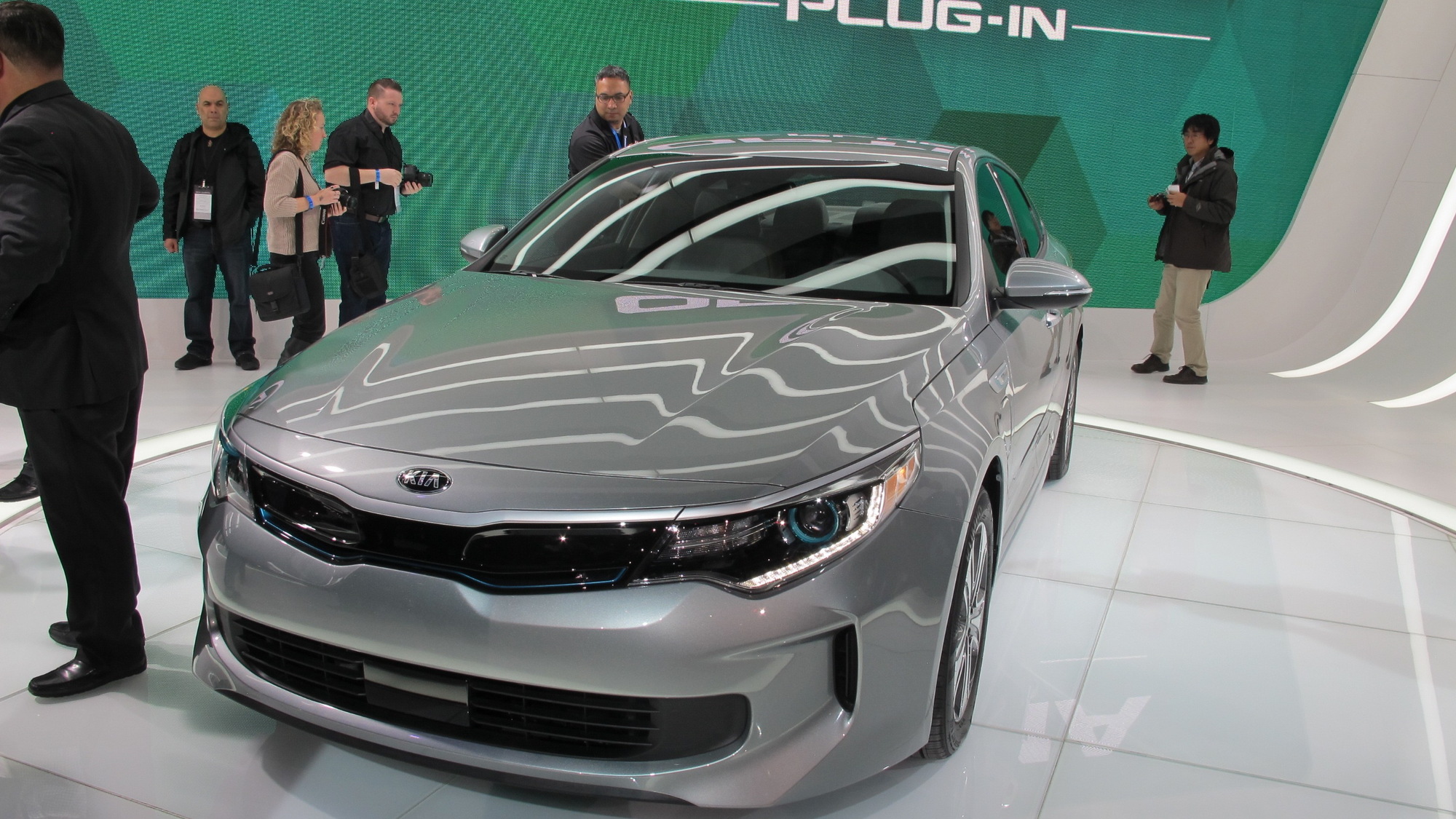 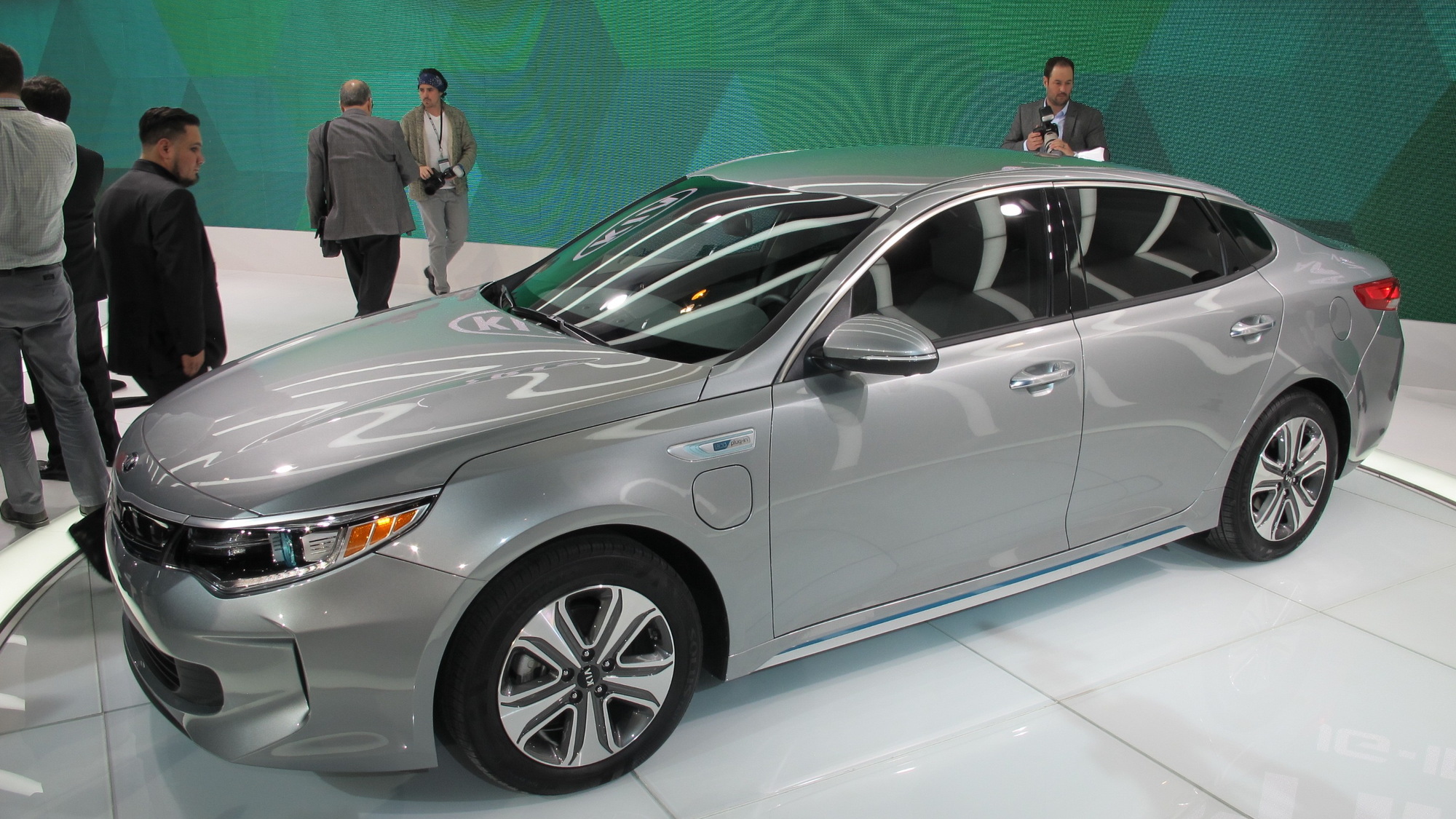 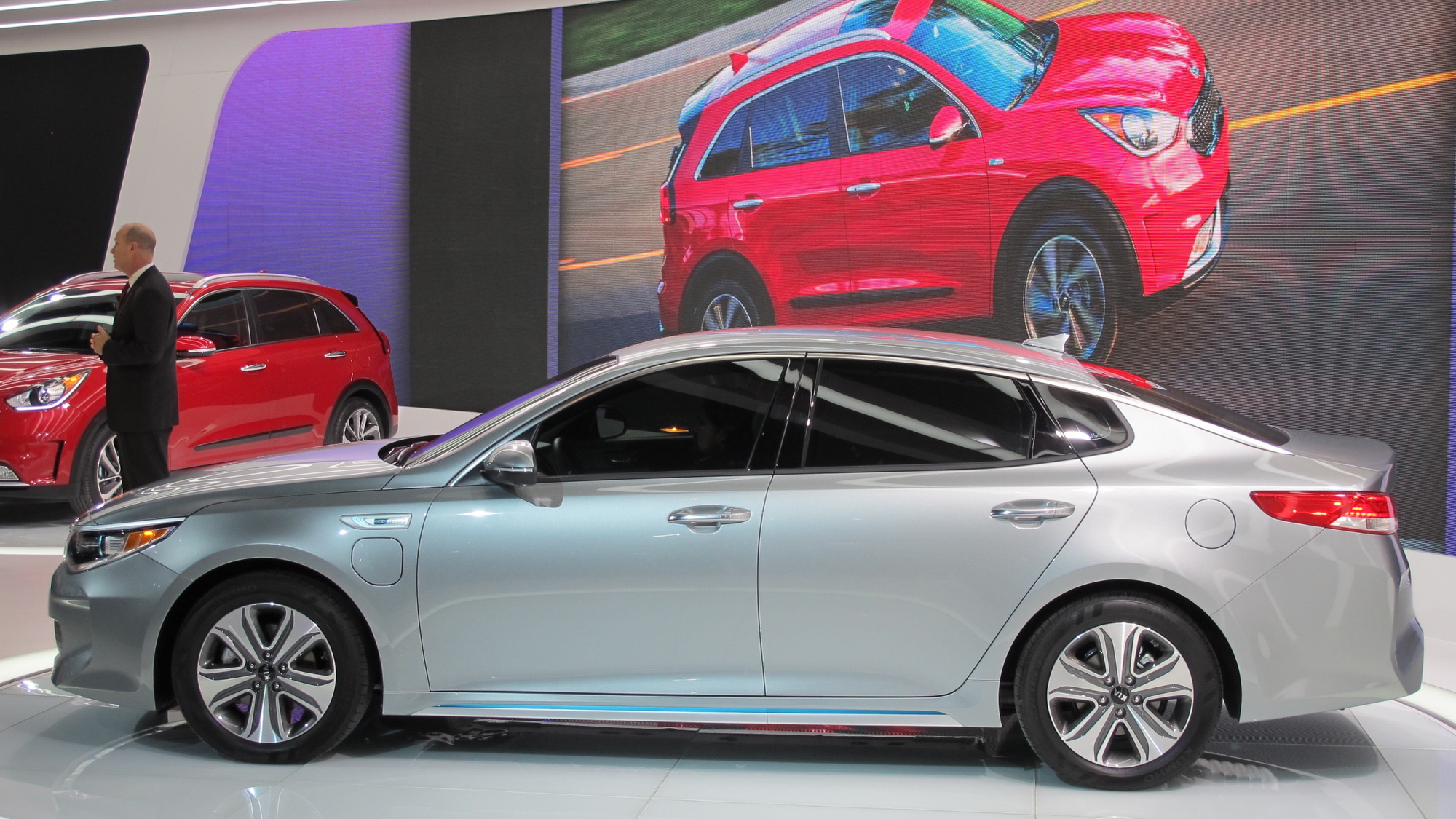 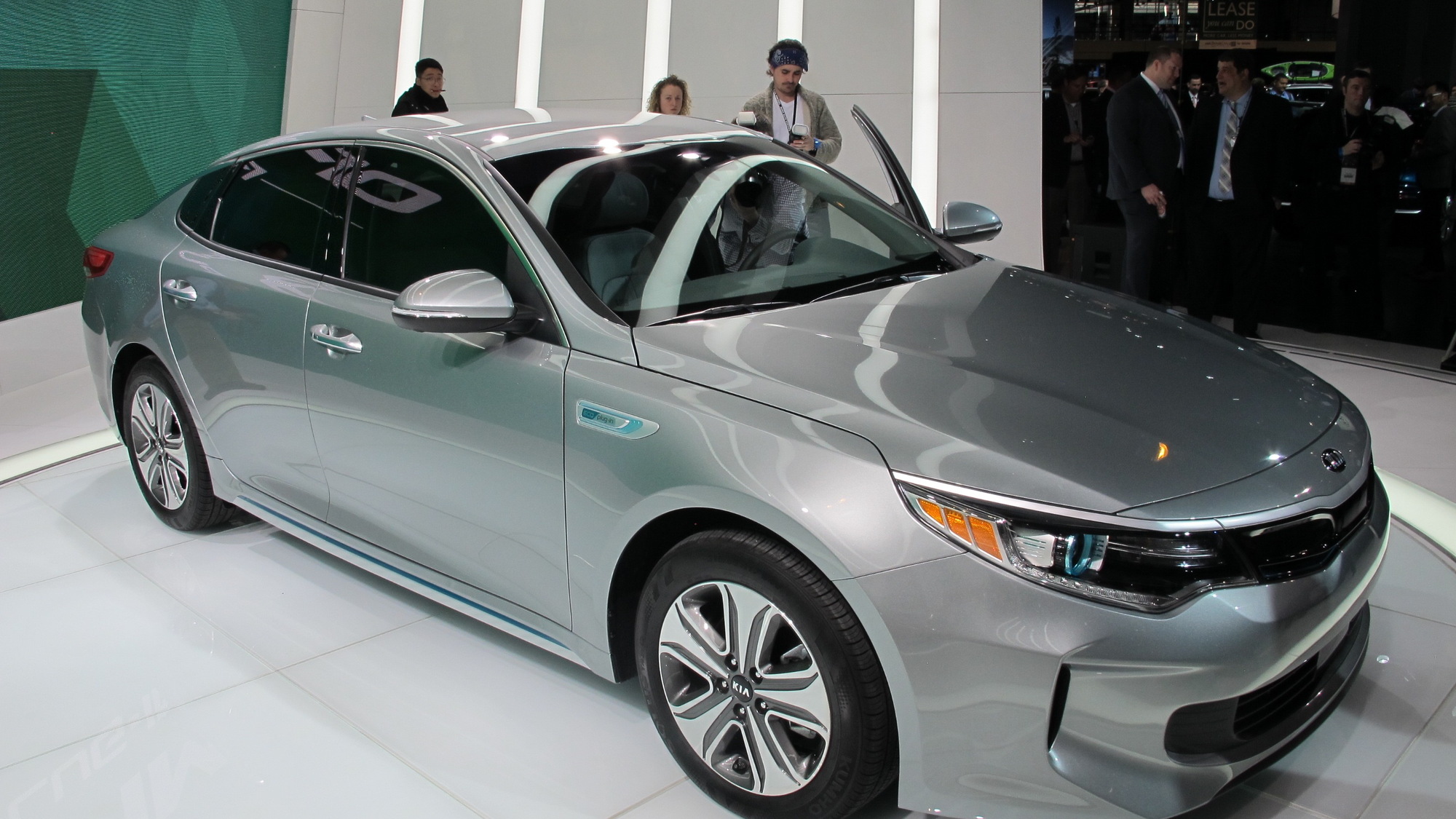 Kia aims for a 25-percent increase in its U.S. fleet-wide fuel efficiency by 2020; and the new 2017 Optima Hybrid and Optima Plug-In Hybrid (PHEV), introduced today at the Chicago Auto Show and due later this year, are key additions to the brand’s lineup to achieve that.

Although the new Optima Hybrid and Optima PHEV are new models, they’re not mechanically unique. They have the same 154-horsepower, 2.0-liter four-cylinder engine, the same six-speed automatic transmission packaged with a 38-kW (or 50-kW for the PHEV) single electric motor, and the same 1.62-kWh (or 9.8-kWh) lithium-ion battery pack, as the Hyundai Sonata Plug-In Hybrid.

The Sonata Plug-In Hybrid offers the same range as the Optima Plug-In Hybrid, as well as the same choice between an all-electric mode, a hybrid mode that saves electric charge, and a charging mode, which charges the battery pack—at some expense of fuel economy and tailpipe emissions, of course.

What’s different, of course, is the rest of the package. These new hybrid and plug-in hybrid models are both indistinguishable from the mainstream Optima sedans in some respects—although they get active grille shutters plus a series of aerodynamic improvements that lower the coefficient of drag to a phenomenal 0.24.

That should be a good thing, as we’ve found the latest 2016 Kia Optima sedans to be far more comfortable and refined than their predecessors. Their supremely quiet ride, well-balanced ride-and-handling traits, and warmer, finely detailed interiors make the Optima lineup one of the best entries in its class.

And based on our first drive experience, and follow-ups, with the Hyundai Sonata Hybrid and Plug-In Hybrid, these models benefit from tremendous improvement in the hybrid system’s electronic controls that allow it to accelerate far more smoothly yet have heightened responses.

No real sacrifice in space or versatility

These two models sacrifice very little to accommodate the hybrid system. Optima Hybrid models have a battery pack that stows effectively in the place where a spare tire would otherwise be, while the Optima PHEV has its battery under (and just behind) the back seat, cutting slightly into cargo space.

Charge times for the battery pack in the Plug-In Hybrid range from just under nine hours on normal 120V household AC, down to less than three hours on 240V (Level 2).

Optima PHEV models will offer an EV Services package that allows you to check the state of charge remotely, among other things. These models are Android Auto and Apple CarPlay compatible—to control smartphone apps via the infotainment system—and the interface has been updated with Google Voice Recognition Local Search.

A ten-speaker, 630-watt Harman/Kardon surround-sound audio system is available, as is a suite of active-safety and driver-assistance systems—including Autonomous Emergency Braking, which can bring the vehicle to a full stop to avoid a crash or reduce damage.

Around 42 mpg for the Hybrid

Kia targets a ten-percent improvement to the fuel economy ratings of the 2017 Optima Hybrid, versus the outgoing model. Given the current model’s combined figure of 38 mpg, that would put the 2017 model in the range of 42 mpg—better on the highway than the Ford Fusion Hybrid, and better than the Toyota Camry Hybrid, as well as just ahead of the Sonata Hybrid.

As for the rest of the details, like features and pricing, we’ll just have to wait and see; look for them later in the spring, with both of these models expected by fall.