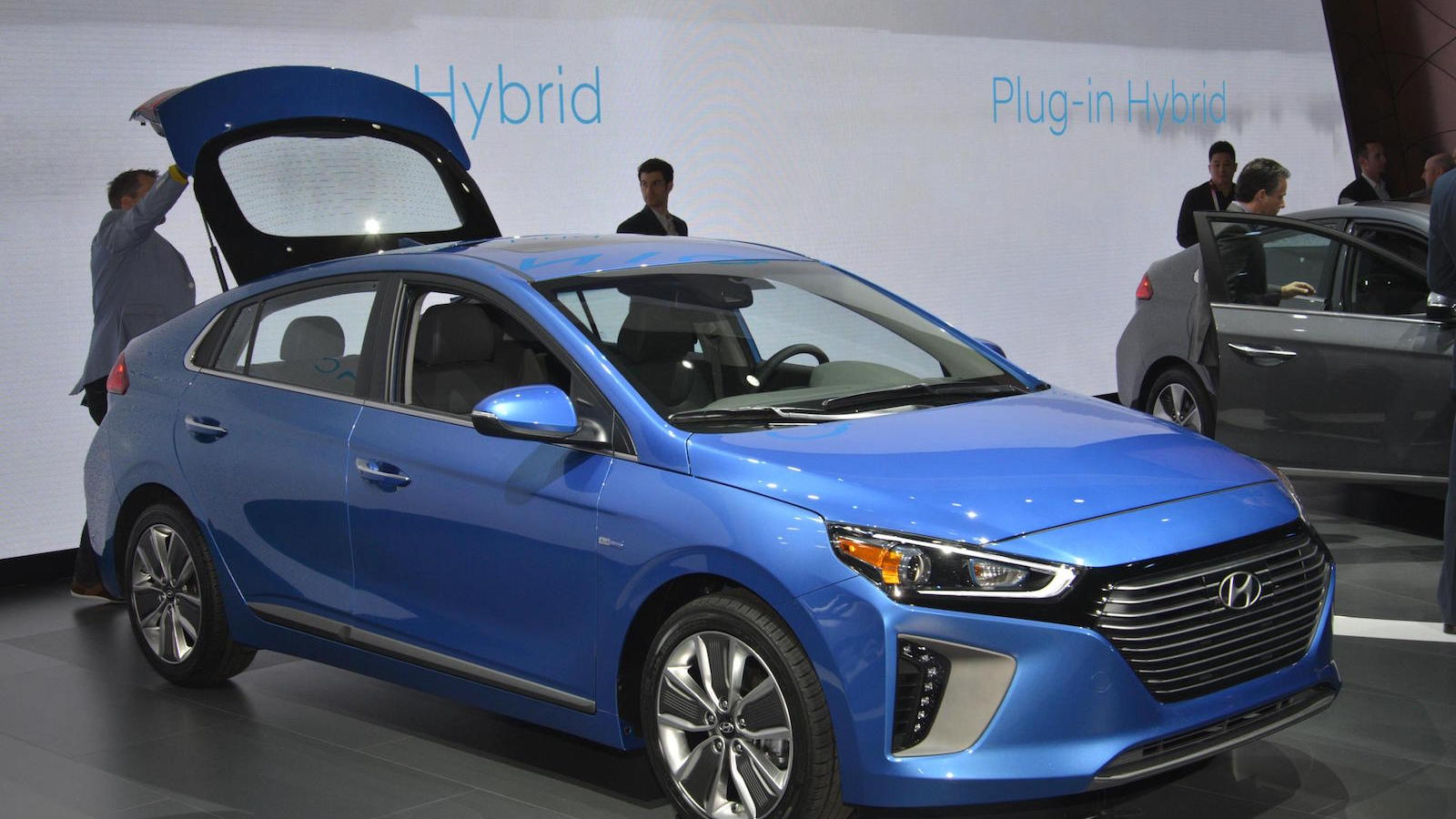 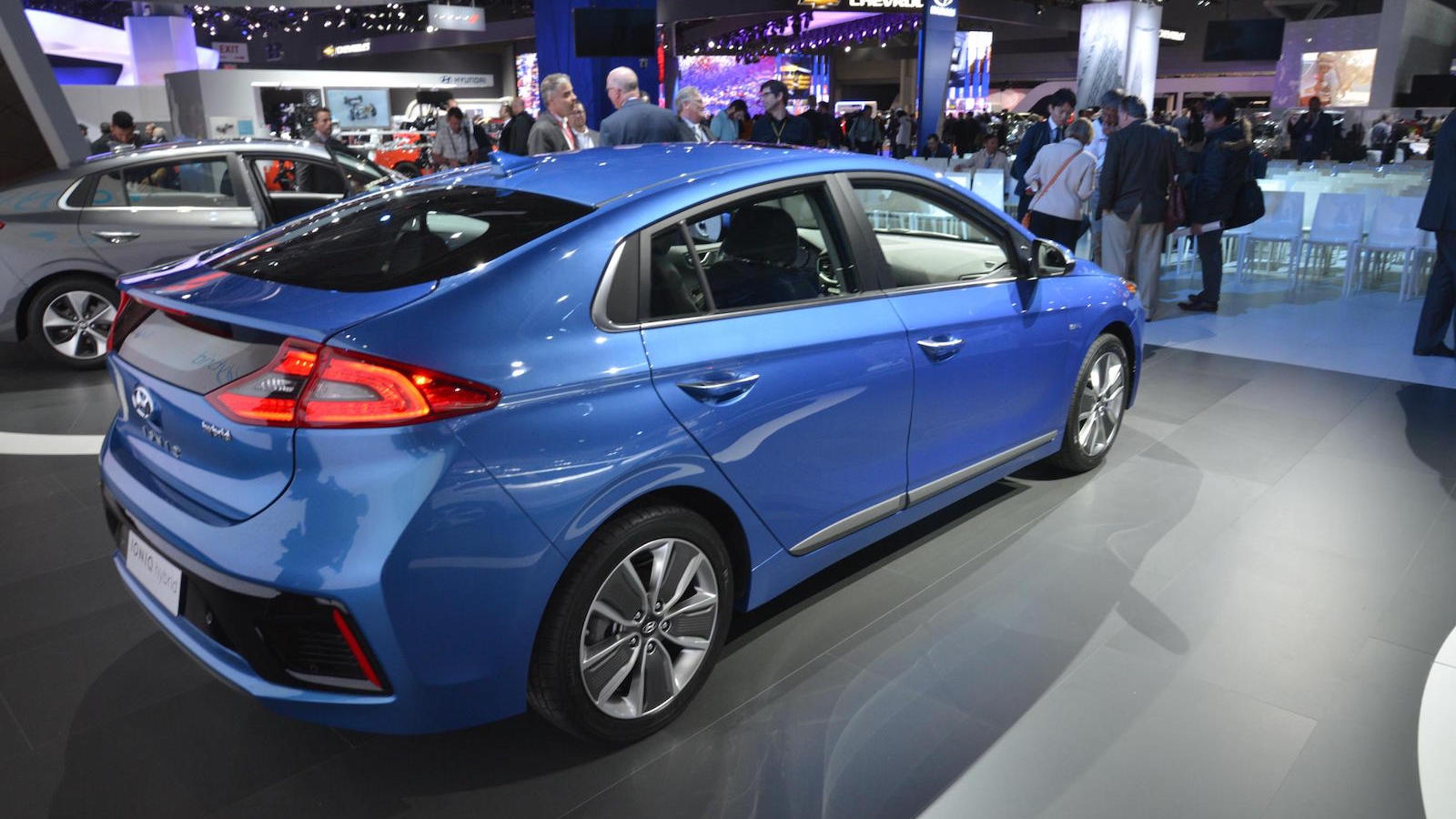 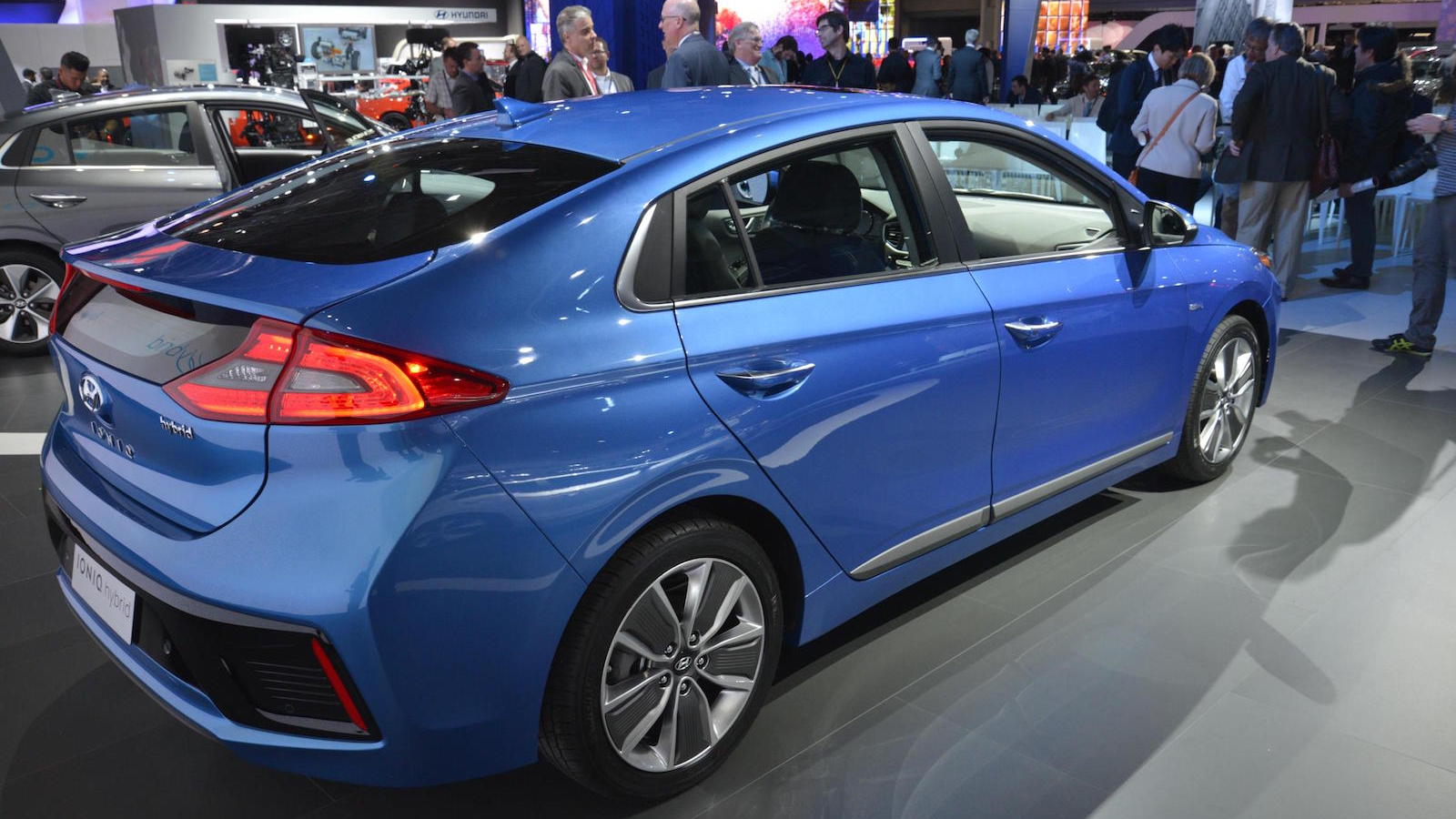 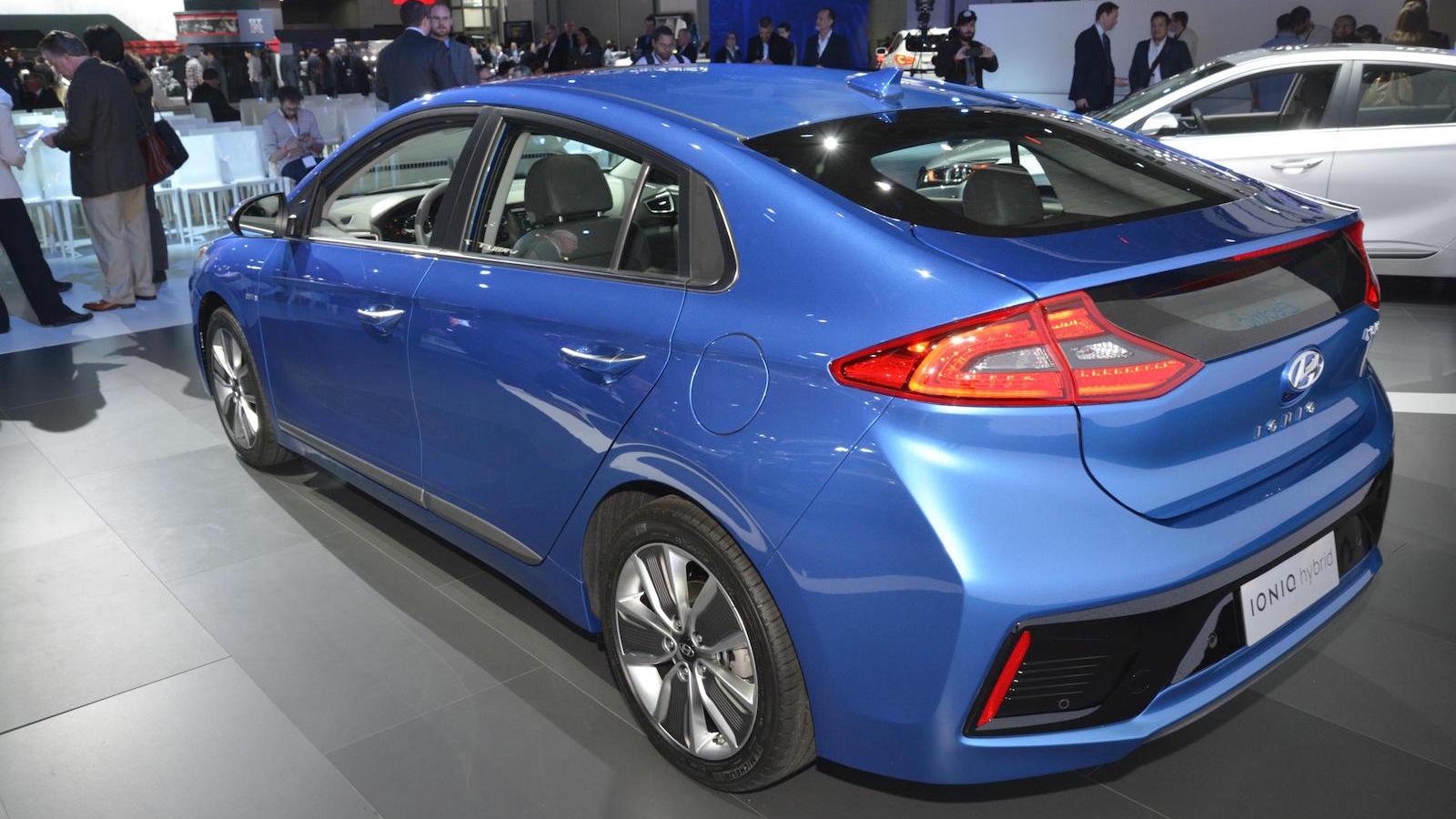 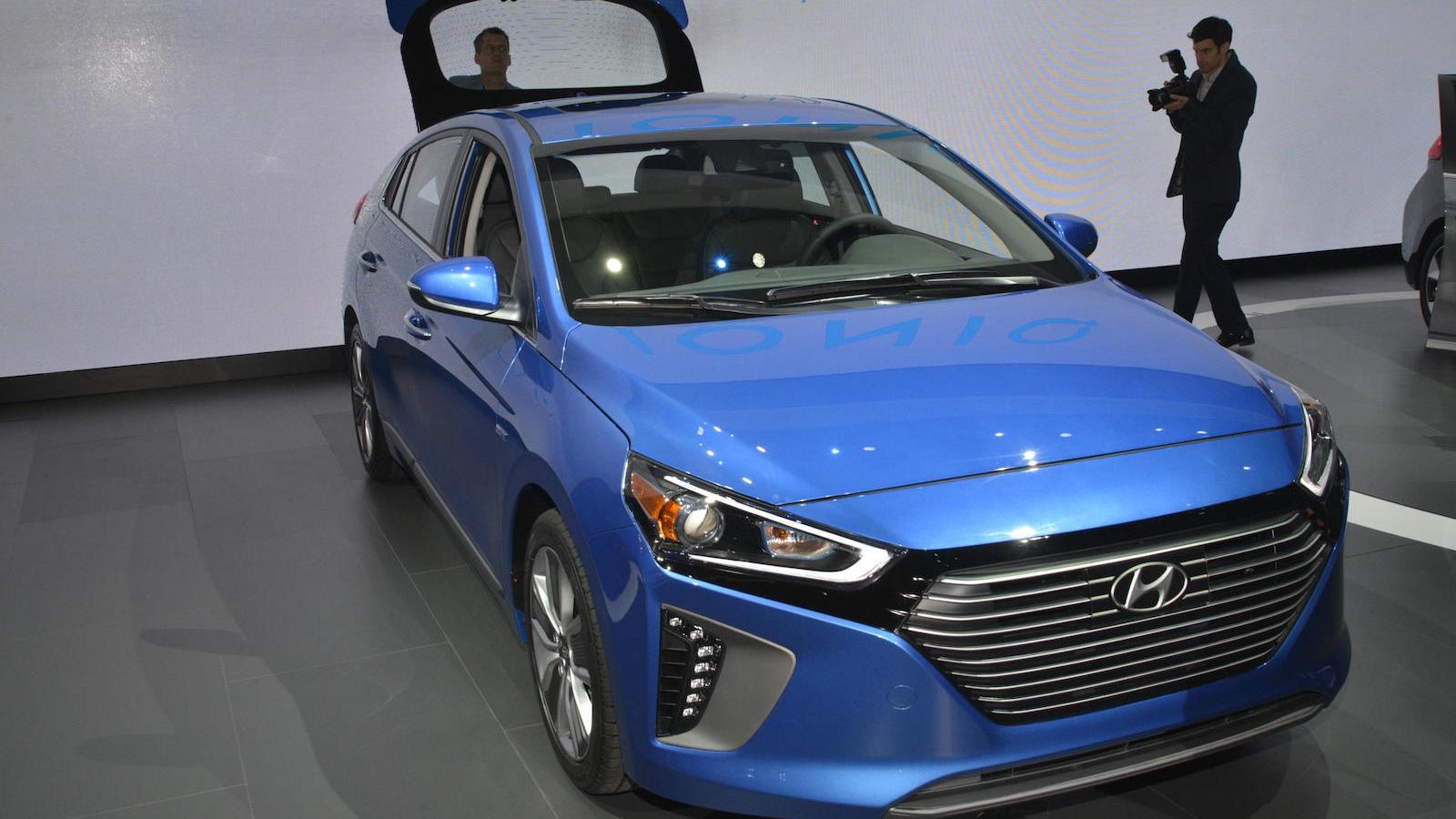 The 2017 Hyundai Ioniq lineup of hybrid, electric, and plug-in hybrid hatchbacks made its U.S. debut today at the New York Auto Show.

Unlike the all-white models shown in the world debut a few weeks ago at the Geneva Motor Show, the U.S.-spec models were silver (Electric), blue (Hybrid), and charcoal (Plug-In).

And Hyundai released a few more specifications for the powertrain, including a confirmation of the 110-mile range projection for the Ioniq Electric.

Running down the U.S. specs, the hybrid Ioniq is powered by a direct-injected 1.6-liter 4-cylinder engine that is quoted as producing approximately 104 horsepower and 109 lb-ft of torque. Total combined output is 139 hp.

Its single 32-kilowatt (43-hp) electric motor is sandwiched between the engine and an adapted 6-speed dual-clutch automated transmission.

The 1.6-kilowatt-hour lithium-ion battery pack sits under the rear seat to recapture otherwise wasted energy, using it to power the electric motor, which can supplement the engine torque or power the Ioniq by itself under light loads at low speeds.

This is a similar system to that used in the hybrid versions of the Hyundai Sonata and Kia Optima mid-size sedans.

The Ioniq Plug-In uses a similar powertrain, but with a larger battery that can be plugged in to recharge it, and a more powerful electric motor.

The electric motor is rated at 45 kw (60 hp) and the 8.9-kwh battery pack, also under the rear seat, is estimated to provide an all-electric range of more than 25 miles.

The Ioniq Electric differs from the two Ioniq hybrid models in several ways. Visually, the grille is replaced by a blanking panel to distinguish it from the combustion-powered Ioniqs.

Inside, Hyundai has replaced the conventional shift and parking-brake levers on the tunnel with a set of buttons and the controller for the interactive display in the center of the dashboard.

The 28-kwh battery pack provides an estimated range of 110 miles and powers the front wheels via an 88-kw (120-hp) electric motor. Power electronics are also located under the hood above the traction motor.

The electric Ioniq's pack, however, is located not only under the rear seat, but also between the rear wheels, and under the load bay—and the electric model uses a simple torsion-beam rear axle to make room, rather than the more sophisticated trailing arms of the two hybrid versions.

The challenge of that configuration, rather than putting a flat battery pack under the passenger compartment floor as in a Nissan Leaf—or a Tesla Model S—is that gives a lower roofline but cuts into cargo space.

It may also constrain the physical space available to fit a higher-capacity battery that would let the Ioniq Electric compete head-to-head with mass-priced electric cars offering 200 miles or more of range.

The first of those, the 2017 Chevrolet Bolt EV, will go into production before the end of this year.

Follow all the latest photos and announcements from the show, where media days take place today and tomorrow, by visiting our New York Auto Show news page.