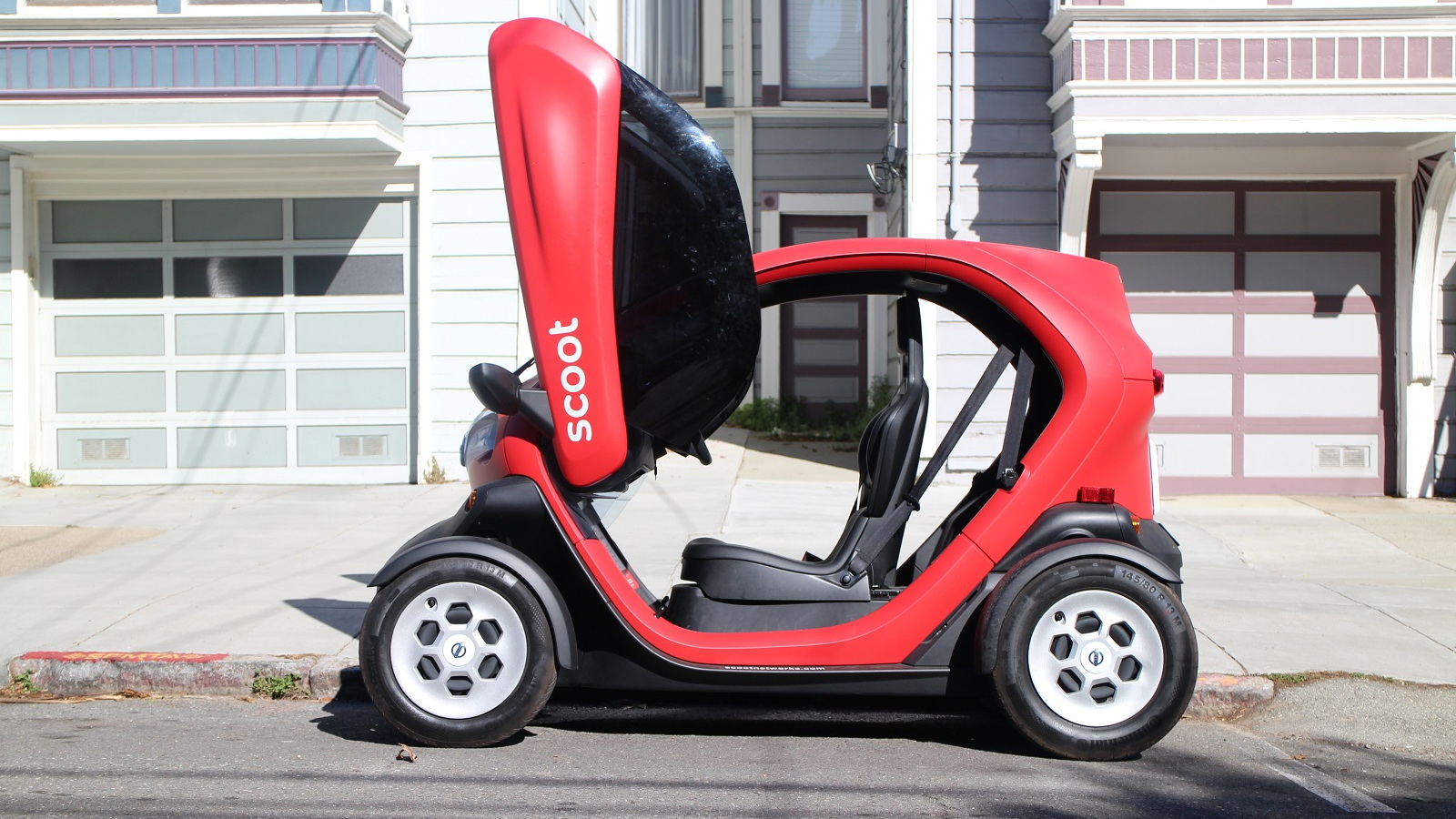 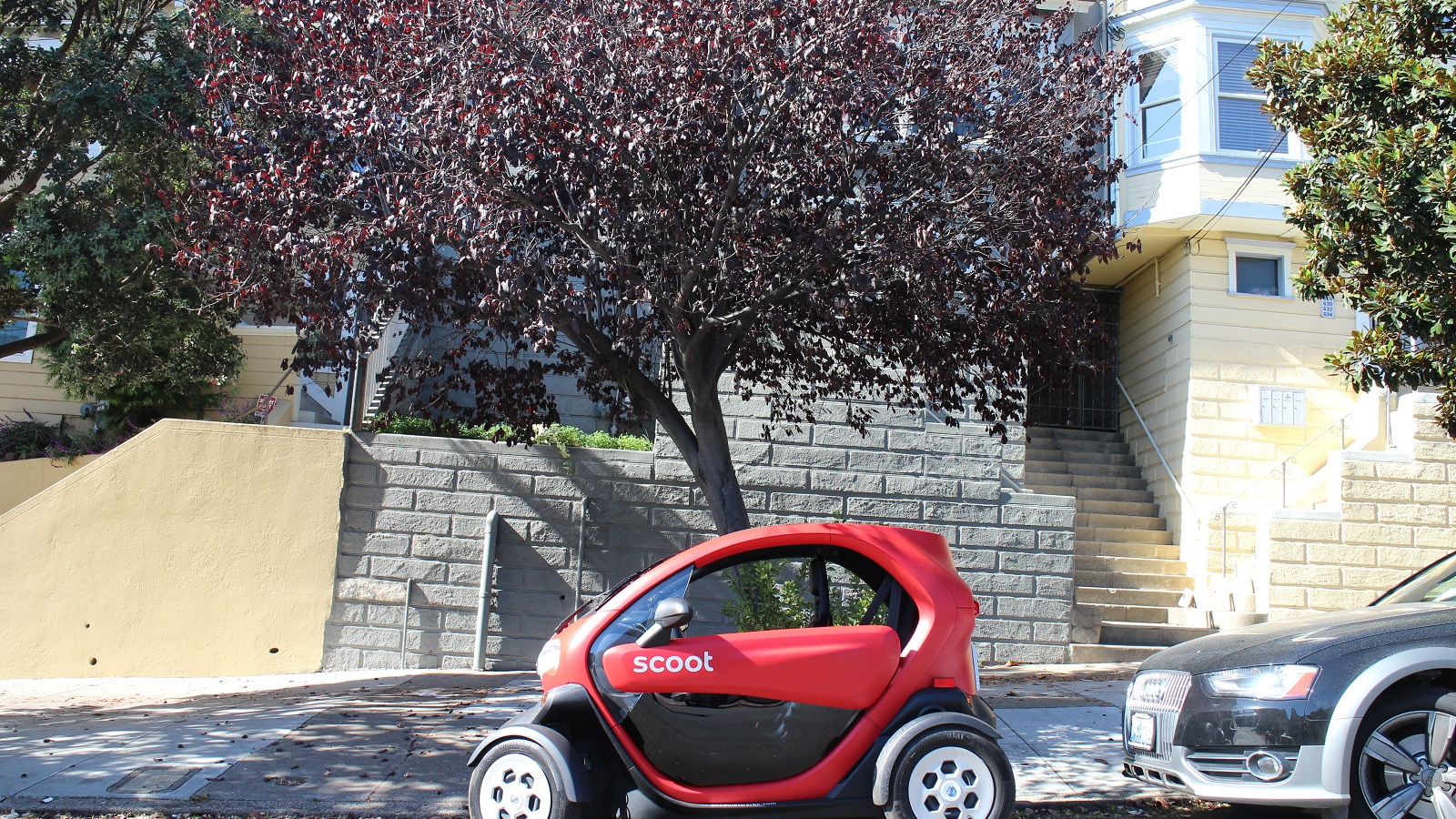 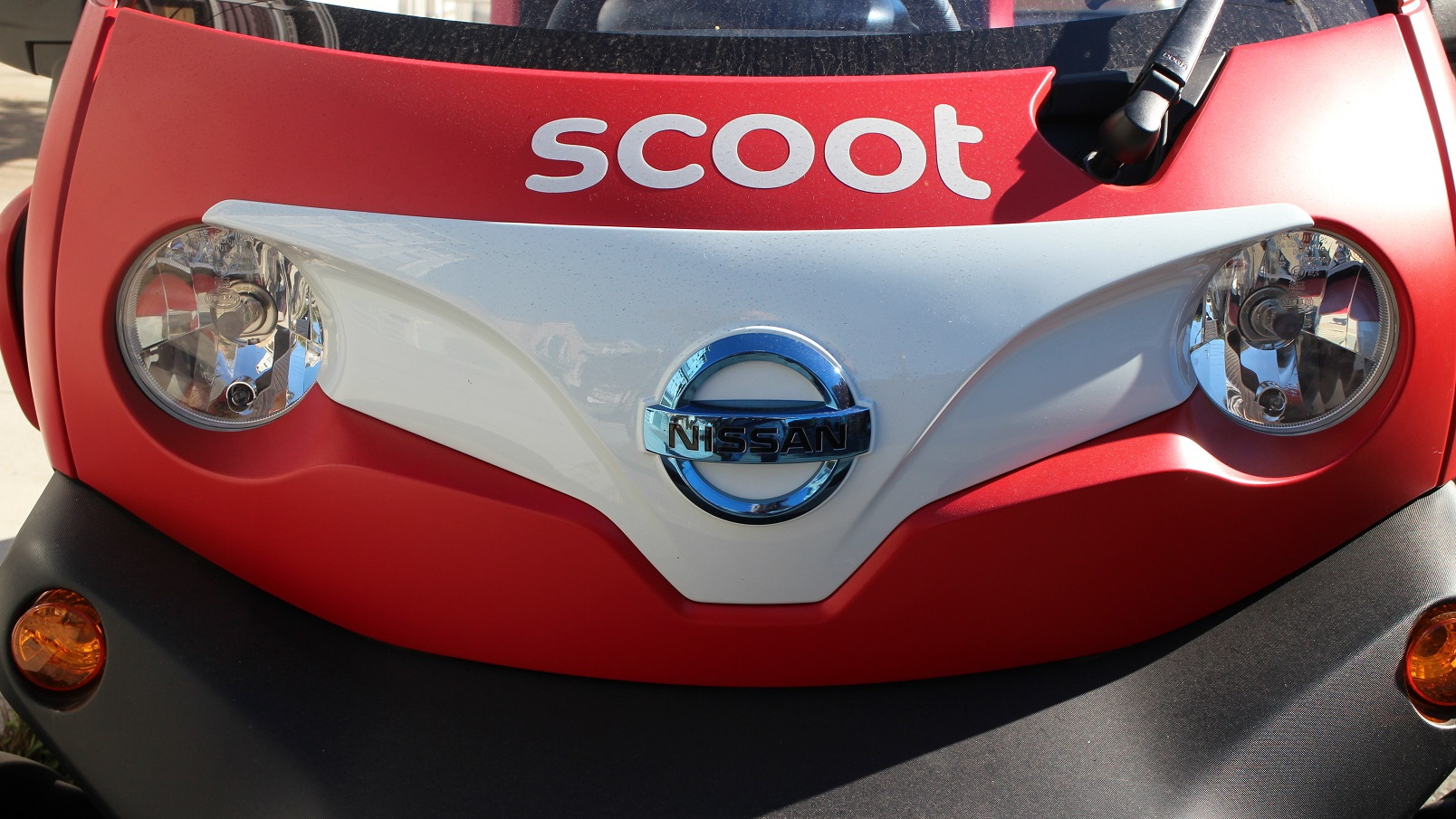 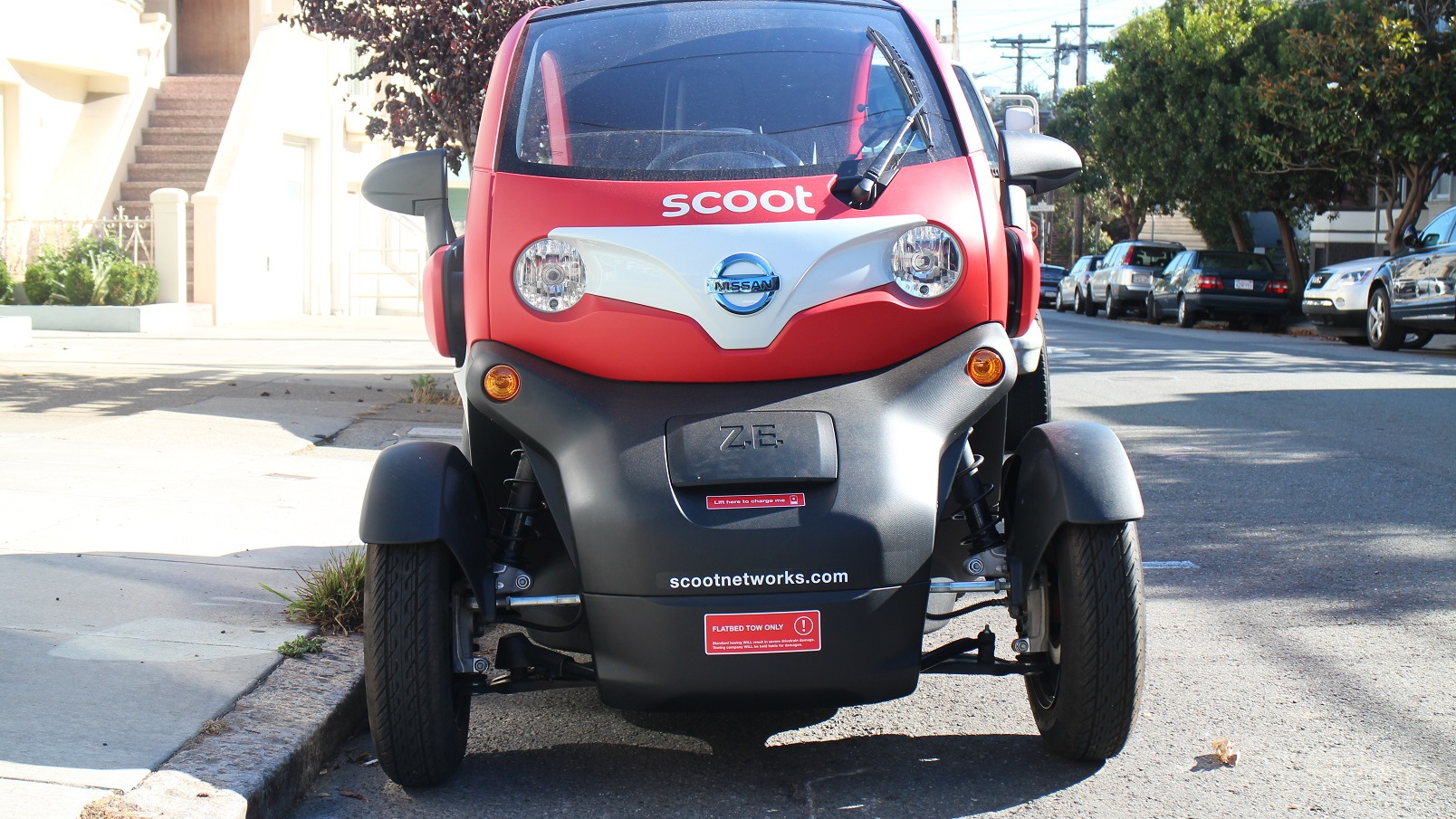 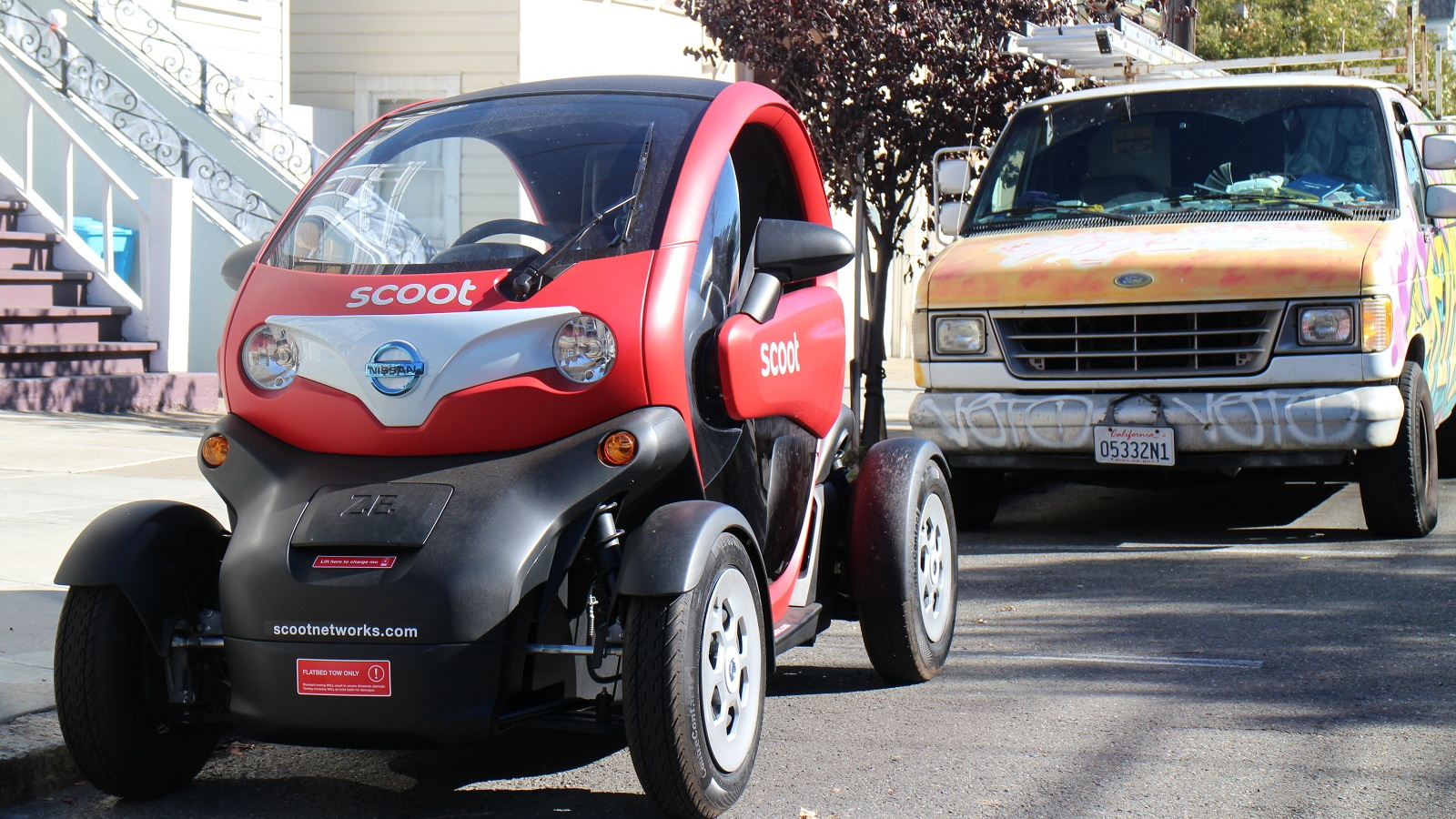 In San Francisco, driving a bright-red tandem two-seat electric Renault Twizy gets you noticed--by everyone from sweet little old ladies to skate punks.

Even on Castro Street. On Halloween.

We spent a weekend with the low-speed electric vehicle, which is just being added to the Scoot Networks fleet of electric scooters on a test basis.

The city itself, with dense and livable neighborhoods spread across numerous hills, is clearly better suited for electric scooter sharing than the bike-sharing seen in New York and other flatter cities.

Scoot offered Green Car Reports the chance to test a so-called "Scoot Quad," actually a Renault Twizy with Nissan badges pasted on. (The Renault logo was visible under the Scoot badge in the center of the steering wheel.)

After downloading the Scoot Network app and sitting through 35 separate short videos on how to use its electric scooters--which are its main vehicles--we were able to unlock a Quad named Qwerty and put about 15 miles on it.

The Scoot app lets users reserve the vehicle, and then unlocks it remotely, once the user tells the app he or she is ready to travel.

The door pivots toward the front of the little vehicle, allowing it to be opened even with cars passing by, and sliding into the single front seat requires a few contortions for an almost-6-foot-tall man.

Inside and on the road, the Scoot Quad (nee Renault Twizy) is exactly halfway between an electric scooter and a very small, basic automobile.

The experience of driving (riding?) it is somewhat similar to that of an ATV, with all the engine noise replaced by some obvious motor whine.

Scoot has made several modifications, including clear Plexiglass panels at the front and bottom to turn the horizontal side barrier into a proper door.

The left windshield pillar has an adjustable clamp bracket on it to hold the user's smartphone, which displays the car's operating info--range, speed, etc.--during travel, and also serves as the ultimate on/off switch.

There's also a rotating knob to turn the car on once the Scoot system unlocks the car, indicated by four beeps from the car.

Lights, horn , and turn signals are on one stalk behind the wheel to the left; wipers, windshield washer, and a defrost button are on its counterpart to the right.

The seat is fixed in place, with a conventional shoulder harness. it's comfortable enough for the short stints that any vehicle limited to 25 mph will be used for.

The side mirrors are fixed in place on the door side bars, but the cabin lacks even a single cubby, bin, or cupholder, meaning even backpacks have to slide around on the floor or rear seat.

On the road, the Scoot Quad's ride is somewhere between firm and harsh--closer to a scooter than a car--especially on some of San Francisco's rougher and more broken pavement. Potholes can be tooth-jarring.

The manual steering is heavy at low speeds or when stopped, but fine underway. And the car's very tight turning circle permits U-turns in a single lane width, perhaps less.

That made snagging very short parking spaces as easy as possible in a city where every shred of curb space has a vehicle of some sort in it, including a lot of Smart ForTwos.

We recharged the Quad once for 45 minutes at a standard Level 2 ChargePoint station in the parking lot of a nearby Walgreen's. (A station for which there was a lot of Saturday morning competition, we note.)

The onboard charger appears to operate at 1.9 kilowatts, and the Quad's onboard range meter showed that 1.3 kilowatt-hours added about 8 miles.

We'd have been happy to spend more time with the French-built Scoot Quad, using it exactly as we did: trips up the steeper hills, around the neighborhood where walking would take too long, and drives up to 5 miles on city streets.

The biggest irritation was the 25-mph speed limiter, since many larger arterial streets--regardless of posted speed--see traffic flowing at 30 to 35 mph.

That's the Federal regulation under which the Scoot Quad / Renault Twizy is permitted to be sold, however, and it's not likely to change.

For hilly San Francisco, the Scoot Quad seems like a smart way to expand from two-wheeled electric transit--which some people just won't risk, despite the helmets provided with every Scoot--to small, easy-to-use electric four-wheelers.

And the people who saw us whining up and down the streets largely seemed to approve of the Scoot Quad.

Several Scoot users expressed jealousy: Only the heaviest users of the service's two-wheeled Scoots have been offered beta test drives of the Quad so far.

One skateboarder even hung onto the car for a block and a half while quizzing us about the car, its power, its range, and what it was like to drive.

San Francisco is notably more open to innovation, startups, and alternative forms of transportation than many other parts of America.

Still, our time with the little Quad got us wondering: First San Francisco, then the world?