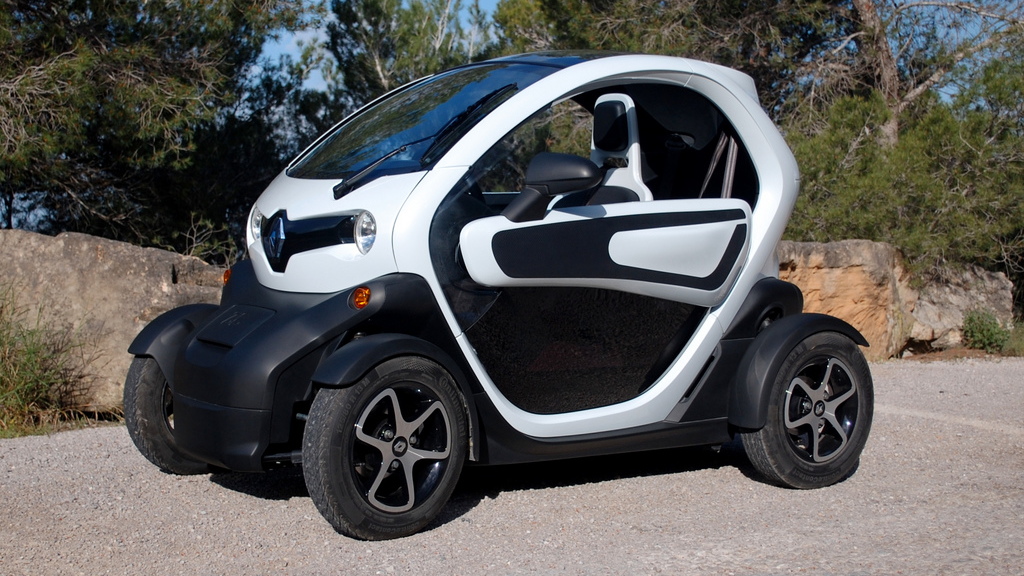 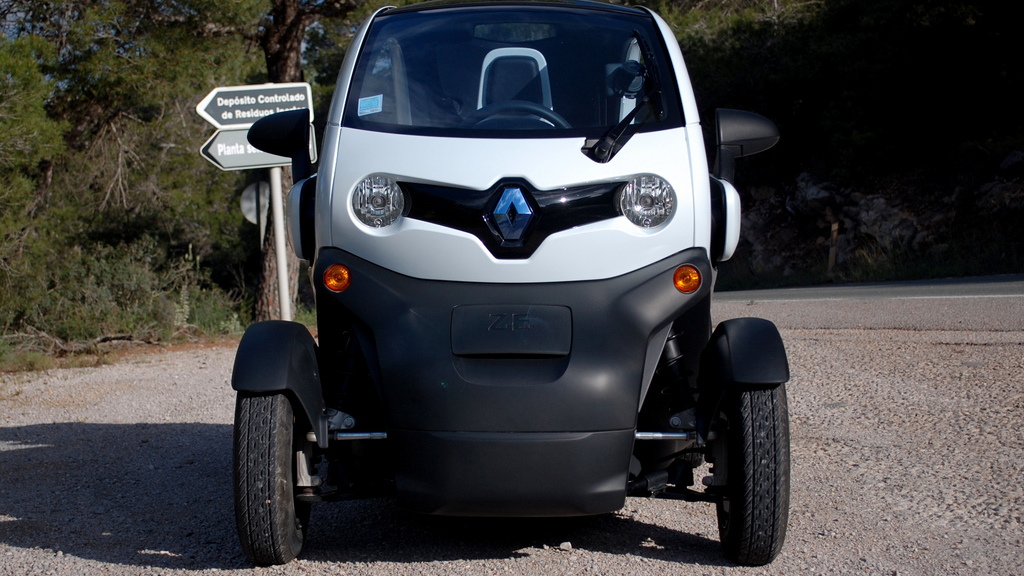 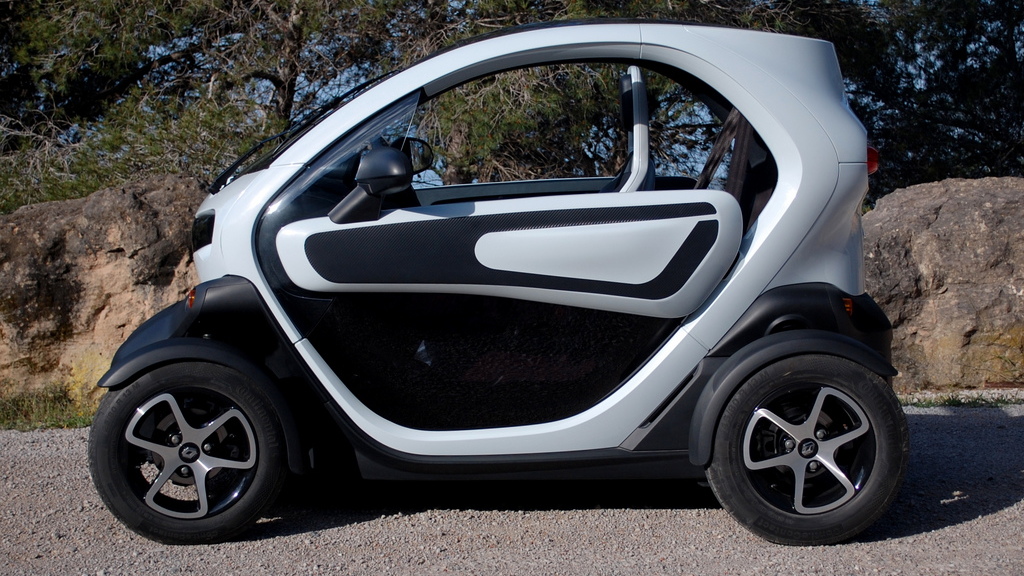 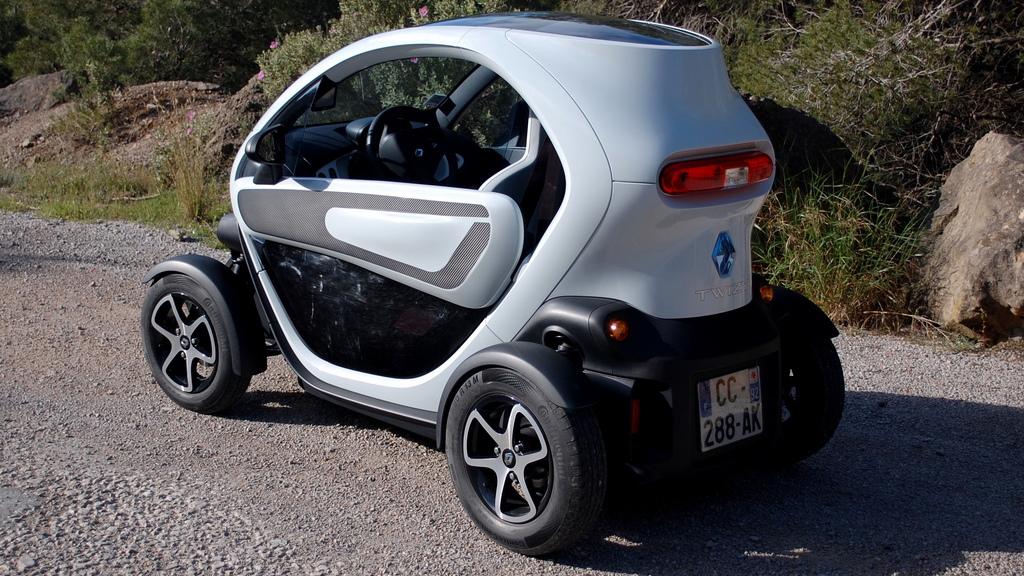 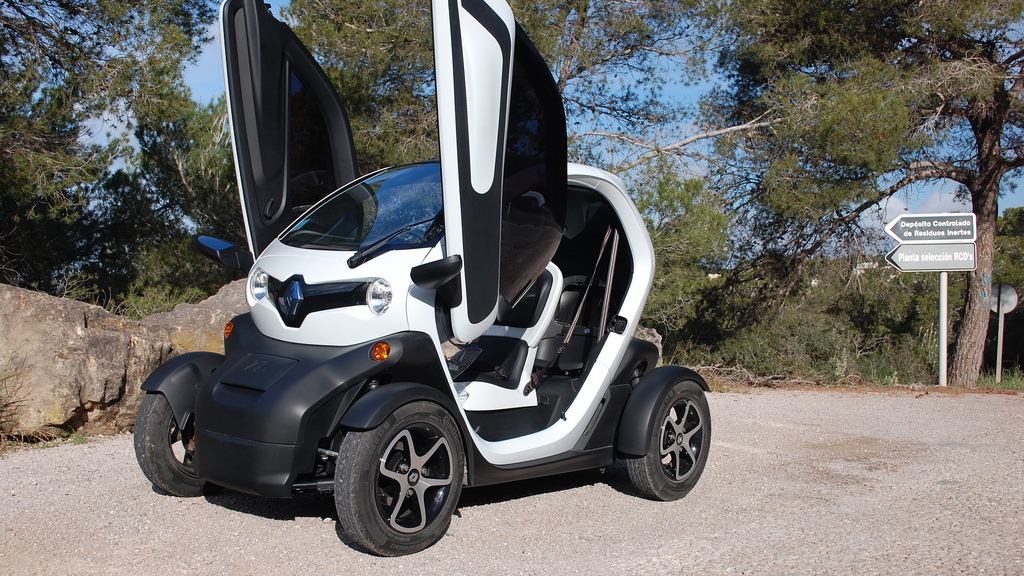 9
photos
GreenCarReports was invited to the island of Ibiza to test Renault's latest electric effort. The Twizy isn't your average electric vehicle, so this won't be your average review.

Instead, we'll aim to answer some of the multitude of questions we were asked via the site and via Twitter.

An urban electric vehicle. In Europe, it's registered as a quadricycle, rather than a car. 'Heavy' quadricycle rules dictate a vehicle with four wheels, and an unladen weight of no more than 880 pounds.

You can make your own minds up on the styling, but we've never had such a positive reaction from such a wide range of people--from children, through teenagers right up to the elderly--to a test vehicle before.

And no, we didn't feel silly driving it. And we virtually guarantee it'd eliminate road rage--it's impossible to get angry at someone driving a Twizy.

What trim levels are there?

The basic Twizy, known as the Twizy 45, has a 5.3 horsepower electric motor and a top speed of only 28 mph. It's essentially a neighborhood electric vehicle, and in Europe it can be driven from 16 years old with no licence, echoing 50cc scooter regulations.

Other Twizys are powered by a 17 horsepower motor, and top speed is limited to 50 mph. There are three trim levels - Urban, Color and Technic. The latter gets alloy wheels and a UV-filtering glass roof.

How long does it take to charge?

From a standard 220-240 volt European outlet, the Twizy should recharge from absolutely zero capacity to full in 3.5 hours. There's no fast-charge option, presumably because as an urban vehicle it won't be used for long enough distances to require it.

No. But in many ways, that doesn't really matter. Mainly because it's an urban vehicle and 50 mph is way above the speed limits for most urban roads, partly because the windowless doors and small size makes it feel quicker than it is, and partly because initial acceleration up to urban speeds is respectably brisk.

We saw a 53 mph maximum speed. It's actually capable of more (you can feel the motor backing off when it hits the limiter), but Renault has limited it to preserve range.

In theory, yes. Quadricycles aren't required to pass crash tests, but Renault builds some of the safest cars in their respective classes in Europe, so the company has a reputation to uphold.

For that reason, the body structure is similar to that of the Smart ForTwo, essentially a crash helmet--it's designed to spread impacts right around the frame. Wheels at the car's extremities help absorb the impact too, and the Twizy has a driver airbag. The driver also gets two seatbelts--one a traditional three-point belt, the other a shoulder belt for the other side.

Do you get wet if it rains?

Unfortunately--or perhaps fortunately--we were unable to test this first-hand in any more than light drizzle. Generally, you should be fine, as airflow sweeps water up and over the car. Renault admits that at a standstill in heavy sideways rain you'd get wet, though.

Renault will sell a waterproof leg protector bag, which fits over your lap and knees, but drivers wanting to use the Twizy in the rain would be best to wrap up warm!

How does it drive?

Brilliantly. The brakes have no power assistance (nor ABS), but the firm pedal is incredibly intuitive as a result. Nor is the steering assisted, which means great feel from the narrow tires.

There's not a lot of grip, but you can always tell exactly how much you have left, and it's very stable in corners thanks to all the heavy components--like the battery--being mounted very low in the chassis.

It's also very easy to drive. It starts with a key, has a dash-mounted E-brake, and two simple buttons for drive and reverse. Pressing both together selects neutral. There's no transmission creep, but the accelerator pedal is sensitive enough for accurate maneuvers.

The turning circle is tiny, and you can see all four wheels from the driver's seat. It's short enough to park nose- or tail-in to the curb, and because the doors open Lamborghini-style, you can even park it incredibly close to things and still get out of the car.

We'd heard rumors of an uncomfortably hard ride, but it's certainly no worse than scooter riders will be used to, and no worse than a Smart ForTwo either. One huge benefit of the narrow body is that you can simply avoid most potholes and drain covers without straying from your lane.

Perhaps unsurprisingly, this question pops up frequently when people discover a car is rear-wheel drive.

No, the Twizy won't "drift" as such, but on unpaved roads we found you could make it slide briefly. Thank narrow tires and decent torque from the electric motor for that.

LOUD. Surprisingly so, though this might be down to the absence of sound insulation in the car. If you've ever driven in Paris you'll know why a loud horn is necessary. Renault is developing what it calls the "Z.E. Voice", a quieter horn to alert pedestrians without scaring small children and waking the dead.

There isn't a great deal. There are two small compartments in the dashboard, one of which is lockable. There's another behind the rear seat. It's not the most practical space as the opening is small and it's very deep.

Renault will sell a large bag to sit on the rear seat, for groceries and the like, but that does mean it would displace your passenger. The rear seat itself is actually habitable for humans, though entry isn't the most elegant. We recommend persons of the fairer sex avoid shorter skirts to avoid "doing a Lohan".

How much does it cost?

Then there's battery lease costs. These range from $65 a month if you drive no more than 4,660 miles a year over 36 months, to $94 a month for a 12-month, 9,320-mile contract. This price includes comprehensive roadside assistance.

At current European electricity prices, Renault says a full 3.5-hour charge costs around $1.60. To save you the math, that's around $93 in electricity per year, on the aforementioned 4,660-mile lease cost--or from $873 a year all-inclusive, battery lease considered.

Is it coming to the U.S?

No. There are no plans at this time, so if you want an urban electric car your best bet will be the upcoming third-generation 2013 Smart ForTwo Electric Drive.

Will Renault sell any?

If we knew that, we'd be using our skills to bet on big sports games instead. But if there's one passage that stood out from Renault's presentations, it was when Renault quoted Steve Jobs:

"A lot of times, people don't know what they want until you show it to them."

Will the Twizy be the equivalent of a wheeled iPod? Time will tell...