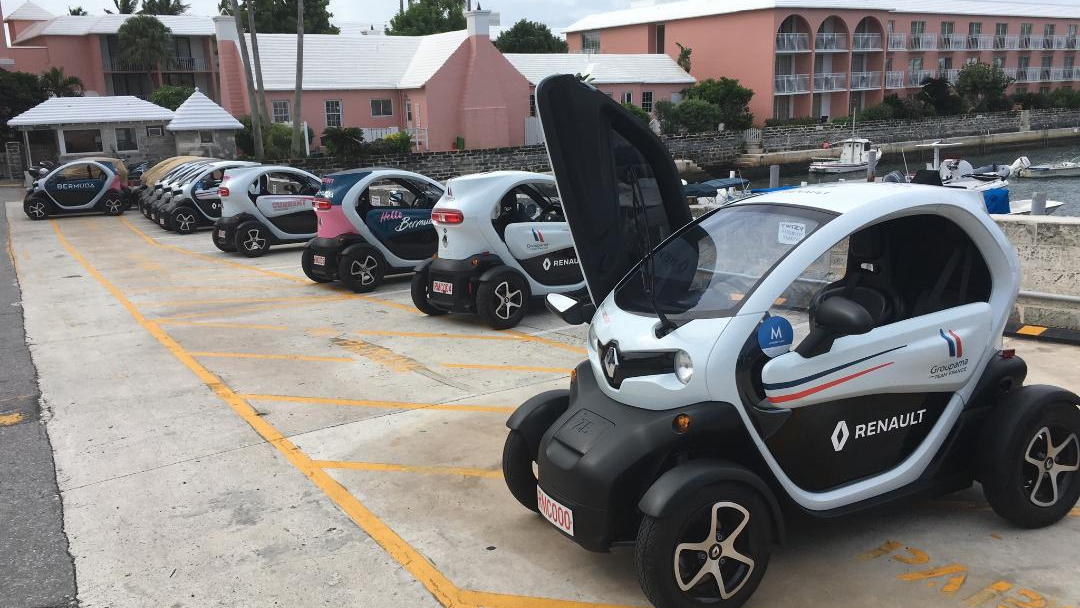 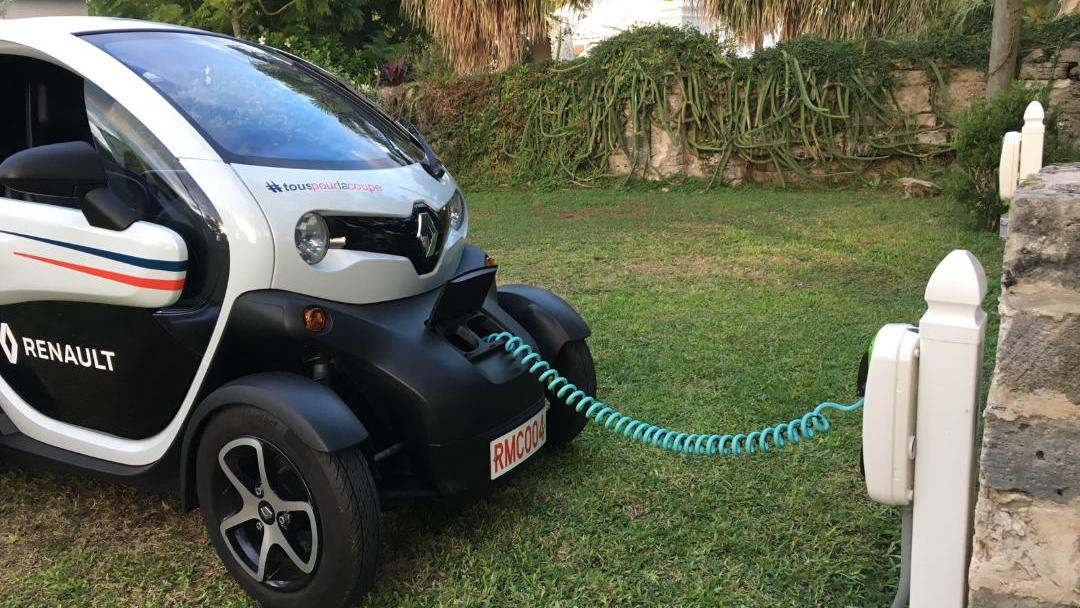 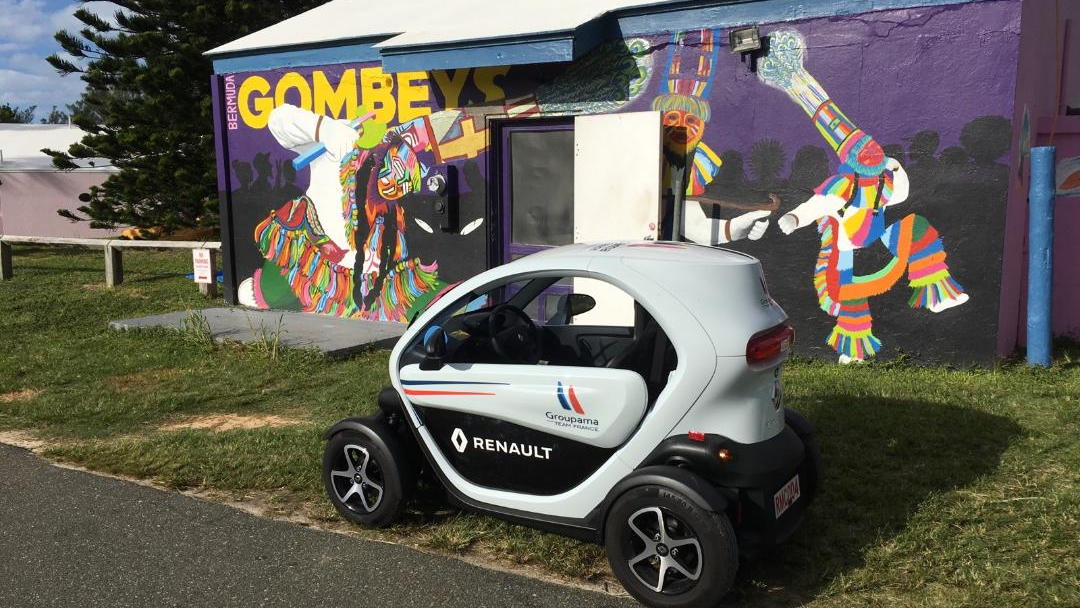 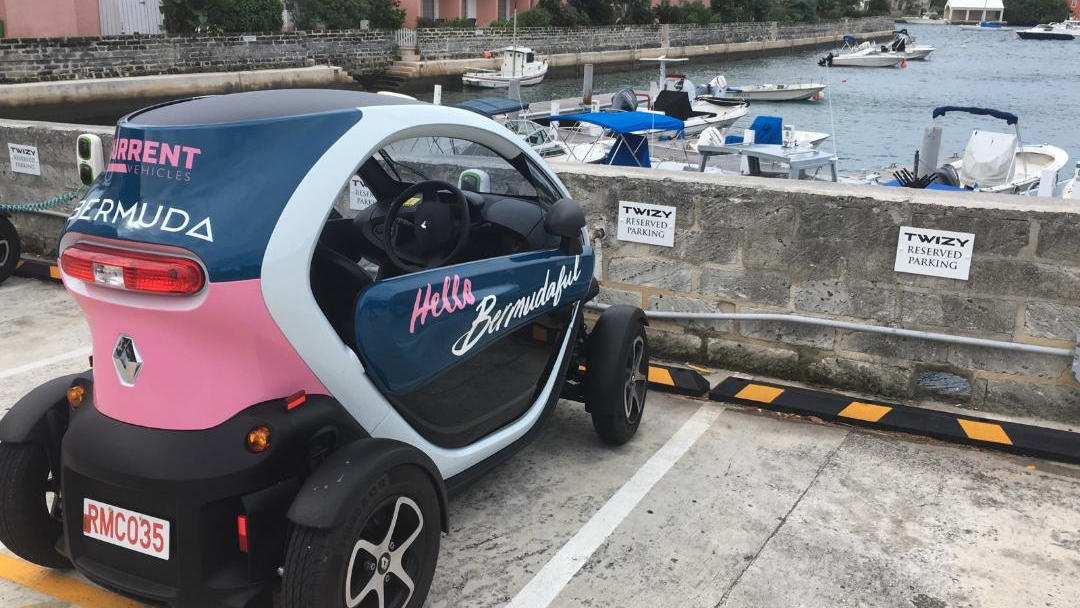 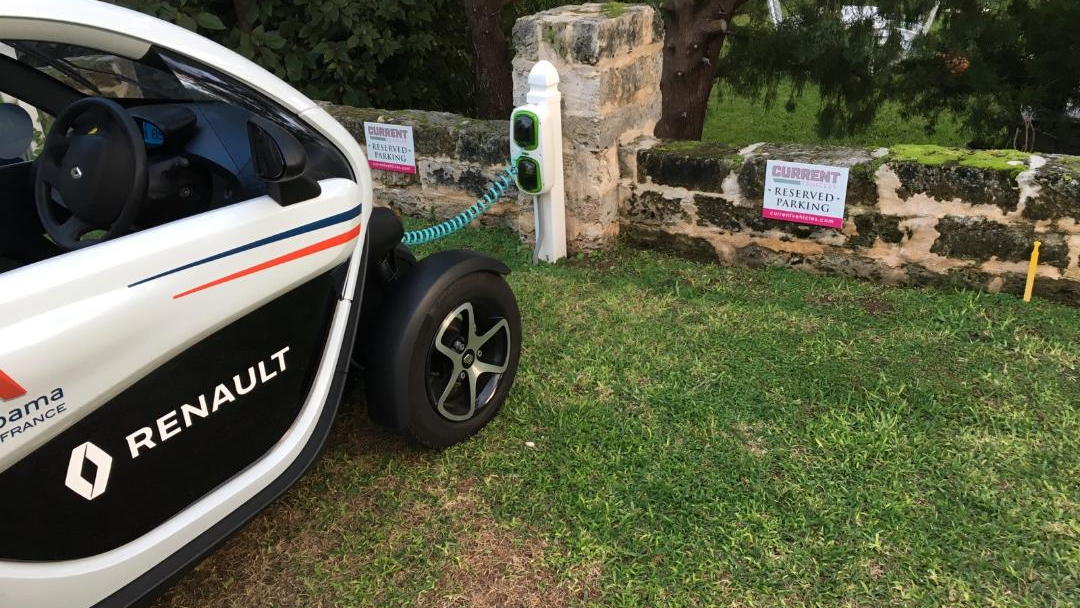 I well remember the first time I saw a Renault Twizy.

Wandering along the Champs Elysees in Paris in the spring of 2012, I happened upon a Renault showroom hosting an electric car extravaganza.

But my eye was soon diverted to the back of the showroom, to what appeared to be a giant egg-on-a-skateboard. Call it a microcar, a quadracycle, a glorified golf cart, whatever—the Twizy instantly captivated me.

This was no dorky NEV (Neighborhood Electric Vehicle), that mainstay of Florida retirement communities.  With its sculpted body, Formula-One-style open wheels, and Lamborghini-style swing-up doors,  it actually looked cool.

A promotional video showed a bevy of impossibly hip and beautiful young couples in Twizzies  zooming through Paris from one after-hours party to the next.

And more to the point,  the Twizy’s performance specs looked surprisingly good: a top speed of 80 km/hr (50 mph) and a max electric range of 100 km (about 60 miles.)

It looked like it would be an absolute blast to drive.

Unfortunately, there was no chance to drive one that night, and it has never been sold in the U.S. So for me, a spin in a Twizy remained a fantasy. Until last week.

Bermuda seemed like a good place for a 30th anniversary long-weekend getaway for my wife Lisa and me.

But I was surprised to learn that it’s impossible to rent a car there. (The roads are too small and crowded.)

And no way  was I going to rent one of the ubiquitous scooters that tourists often use in Bermuda. (Almost got killed on a Vespa in Germany many years ago.)

Not to worry, our AirBnB host assured us over the phone: The bus service in Bermuda is excellent.

Oh, and there’s this new little electric thingamabob that’ s been made available to tourists here recently, called the Twizzle or something.

The Current Vehicles rent-a-Twizy operation is located at the Hamilton Princess Hotel in downtown Hamilton. We arrived to find a section of the parking lot occupied by a couple of dozen of the terminally cute little bugs.

The rental rate was $99 a day, plus a mandatory $30 fee for insurance. This seemed ridiculously high, considering that I had recently rented a full-sized real car in California for $99 a week.

On the other hand, a dinky little scooter typically rents for $50-$80 per day in Bermuda.

Rip-off or bargain? Hard to say. In any case, we signed on the dotted line for three days, with an assurance we could bring it back a day early, no problem.

Loading two people into the tandem-seat  Twizy is quite an operation.

The back seat passenger literally has no knee room, and must wrap his/her knees around the driver’s seat, much like the rear passenger on a motorcycle.

As a result, the driver’s seat must slide way forward to allow room for the back-seater to get in (from the right side only, due to the shoulder harness hanging on the left side).

Fortunately, the Twizy’s flip-up doors open up the whole side of the vehicle. Once the back-seater is shoehorned into place, legs akimbo, the driver’s seat slides back into his or her lap so the driver can enter from the left side.

Lisa, at 5 feet 4, seemed comfortable back there, but at 6 feet 2, I can’t imagine myself ever being a Twizy passenger. In the front seat, however, there was plenty of room even for tall people like me.

Renault has apparently tried to make the Twizy driving experience car-like, to some extent. I loved the the steering wheel in the center of the narrow vehicle, which  made me feel like a Formula 1 or Indy 500 race driver.

The usual stalks sat behind the the steering wheel for turn signals, wipers, and lights. (Though the turn signal made a weird electronic chirp rather than the standard clicka-clicka.)

No shift lever; instead two buttons on the panel, one for forward, one for reverse. (For neutral, you pressed the adjoining halves of each button together. Again, weird.)

There was no central rear-view mirror because, with no rear window, there’s nothing to see back there except your back-seater’s (hopefully) smiling face.

But the two side mirrors give me all the rear view I needed—or would have, had they been adjustable. I quickly  found I had to scrunch down to get the right angle to use them.This later became a major annoyance in traffic.

The one thing I hated about the cockpit was the parking brake. Awkwardly located just under the panel on the left side, it moved in an unwieldy arc and required a simultaneous tug and button-click to release. Overall, an ergonomic disaster.

It was a bizarre feeling to head out into busy traffic—on the left side of the road, no less—in this tiny thingamabob..

Its tiny size, low center of gravity, and centerline steering did indeed make it a blast to drive. It felt reassuringly carlike, just more….what’s the word….Peppy? Sporty? Breezy? Fun?

You just never get bored driving this thing.

Okay, the ride is harsh and noisy, despite (or because of?) the McPherson struts. The seat has terrible lumbar support; my lower back started to hurt after about 30 minutes behind the wheel

The Twizy is very noisy, with a loud high-pitched whine that, to my ear, sounded more like the gearbox than the electric motor.

Traffic in Bermuda typically moves along at 25-35 mph on the narrow roads, and the Twizy never had a problem keeping up.

With 17 hp and a weight of about 1,000 pounds, its acceleration was decent, though you really had to stomp hard on the pedal to get it.

I found the brakes to be mediocre, with very high pedal pressure required to get any reasonable stopping power. (There is supposedly regenerative braking through the pedal.) I did not try a hard stop.

Speaking of regen, I was disappointed that there wasn’t more of it built in to the throttle response.  With trailing throttle, the Twizy felt pretty much like a normal car. Stronger regen would pump up the sporty-driving index a notch or two.

On one long straight stretch of empty road—a rarity in Bermuda—I managed to hit 80 kph, or 50 mph.  But it seemed happiest around 50 kph, or 30 mph.

After my near-death scooter experiencer, I still feel a bit vulnerable in small vehicles. The Twizy, with four wheels, shoulder harnesses for both riders, and a front-seat airbag, is clearly much safer than a scooter.

According to the Current Vehicles rep we rented from, since the company started last summer there’s been only one Twizy accident, a minor one that was the fault of the other driver. (There were no injuries.)

Nevertheless, in heavy traffic, I felt a bit vulnerable. In any collision with a car, the Twizy and its occupants will come out the losers, airbag notwithstanding. A side impact in particular could be serious; the Twizy’s flimsy doors provide virtually no protection.

With its 6-kWh lithium-ion battery, the Twizy’s nominal range is 100 km, about 60 miles. Current Vehicles tells its renters to expect about 50 miles range in normal driving. Since Bermuda is only about 25 road miles tip-to-tip,  a 50-mile range is more than adequate.

I found the 50-mile number to be reasonable; on our first day we drove from Hamilton to Horseshoe Beach to Tucker Town to St. George’s—a total distance of about 30 miles—and had about 30 percent charge remaining, good for another 15 miles or so.

But a busy tourist hopscotching around the island from beach to cave to art museum might easily exceed 50 miles per day.

For them—and for multi-day renters—Current Vehicles has installed  five 240-volt Twizy charging stations at various points around the island, available to all Twizy renters. (More are planned.)

We used the one in St. George’s, in a churchyard about a 15-minute walk from our airbnb. A full charge took about three hours.

In addition, a number of hotels and rental houses have installed Twizy chargers for their guests. Our hosts already had their Twizy charger installation scheduled; unfortunately we missed it by a few days. That would have saved me a few miles walking from charging station to home and back.

Bermudians seemed to like the Twizy; we got a couple of compliments from locals about our “buggy.” In fact, our host told us there’s been a movement to allow locals to buy them.

To limit overcrowding on the roads,  Bermuda not only bans rental cars, but also currently limits each household to one car. Any second vehicle must be a scooter or motorbike.

(Thus our host, a wealthy insurance executive, rides a motorbike to work so his wife can use the car during the day.)

Car-starved locals are now asking the government to allow the Twizy to qualify as a second household vehicle.

Due to logistical factors and a forecast for rain on our third day, we returned our Twizy a day early. Unfortunately, the Current Vehicles rep hadn’t warned us about their 24-hour cancellation policy, so we ended up having to pay for three days anyway.

Not really. Sure, it was a blast to drive. But only for a half-hour or so, after which the motor/gear noise, rough ride, bad seat, maladjusted mirrors, and feeling of vulnerability in heavy traffic began—for me at least—to outweigh the zippy wind-in-the-hair fun factor.

Renault could certainly solve the seat, noise, ride, and mirror problems. (And add some regenerative braking, and change the darned handbrake.) An improved Twizy 2.0 could finally earn its place as a serious contender for the title of the Funnest Thing on Four Wheels.