A popular compact sedan fitted with a tiny 1.0-liter three-cylinder engine may sound like an Eighties econobox all over again.

But in fact the 2015 Ford Focus 1.0L EcoBoost is on sale today, though we suspect its lack of an automatic transmission will discourage nine out of 10 potential buyers.

And that's a shame, because those drivers willing to shift their own gears will likely find this to be by far the most fuel-efficient Focus they can buy.

We had a brief test drive in the Focus EcoBoost last month, and it left us eager to test the car over a longer period.

Now that we've spent 10 days with the car, covering 643 miles in the process, we can say that it delivered admirable gas mileage.

According to the car's trip computer, we averaged 40.2 miles per gallon over an extended version of our usual test route, comprising about two-thirds highway miles and one-third city and suburban lower-speed traffic. 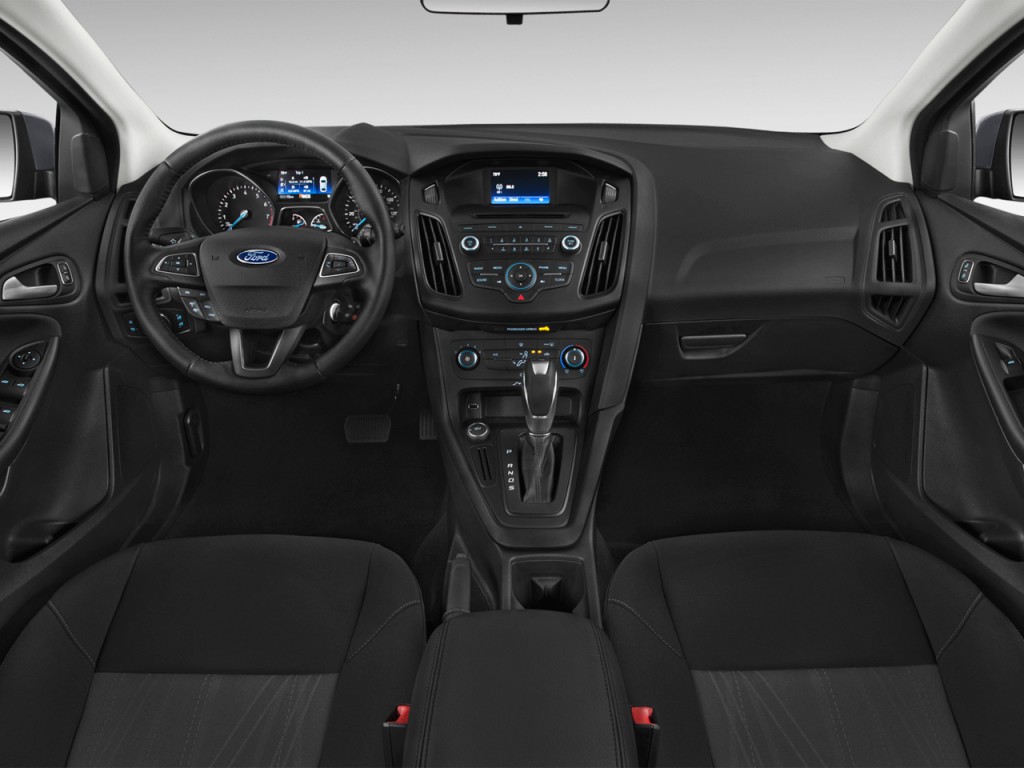 And unlike Ford's challenges with certain other EcoBoost and hybrid vehicles--which have been criticized by many owners for not delivering even the EPA combined rating--we found the Focus EcoBoost beat its EPA numbers handily.

While that's just 2 mpg better than the next-best Focus, it almost matches the 42 mpg we got with the same engine in the smaller Fiesta subcompact--rated at 37 mpg combined.

To replicate "average" driving styles, we varied between leaving the car in the highest gear possible (for best fuel economy) and driving it energetically, including revving the engine up to its limit.

The Focus EcoBoost's shift-advisor light in the dash cluster was among the most aggressive we've seen--usually suggesting an upshift of one, two, and sometimes three gears any time the engine crossed 2000 rpm.

That meant leaving the car in sixth gear down to road speeds of 35 or 40 mph, with the engine turning over just 1250 rpm, indicated by a quiet growl from under the hood. 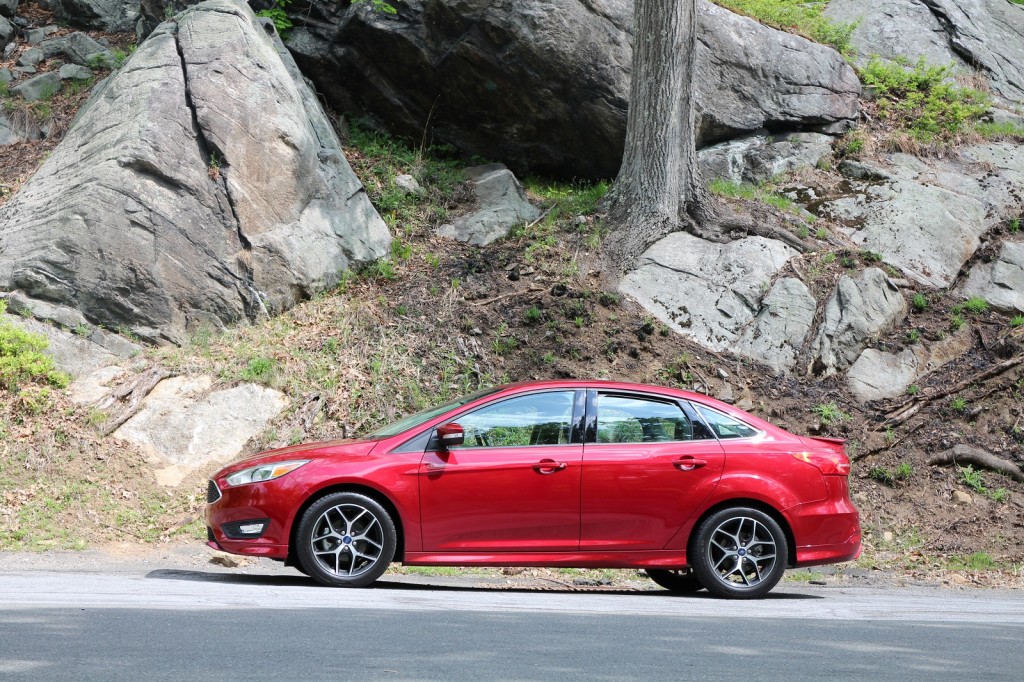 Doing that eliminated any possibility of acceleration. When more speed was required, we learned quickly to downshift, often two or three gears at a time, to get the needed power.

In other words, driving like a European--or at least a North American who knows how to use a manual gearbox properly to match engine revs to the required power output at any given road speed.

That's a skill that may well now be gone from the U.S. driving public at large, which buys more than 90 percent of all new vehicles with automatic transmissions of one sort or another.

Another European feature is the start-stop system that switches the engine off when the car is at rest, the shift lever is in neutral, and the driver's foot is off the clutch.

The system works well in the Focus EcoBoost, restarting the small engine quickly. 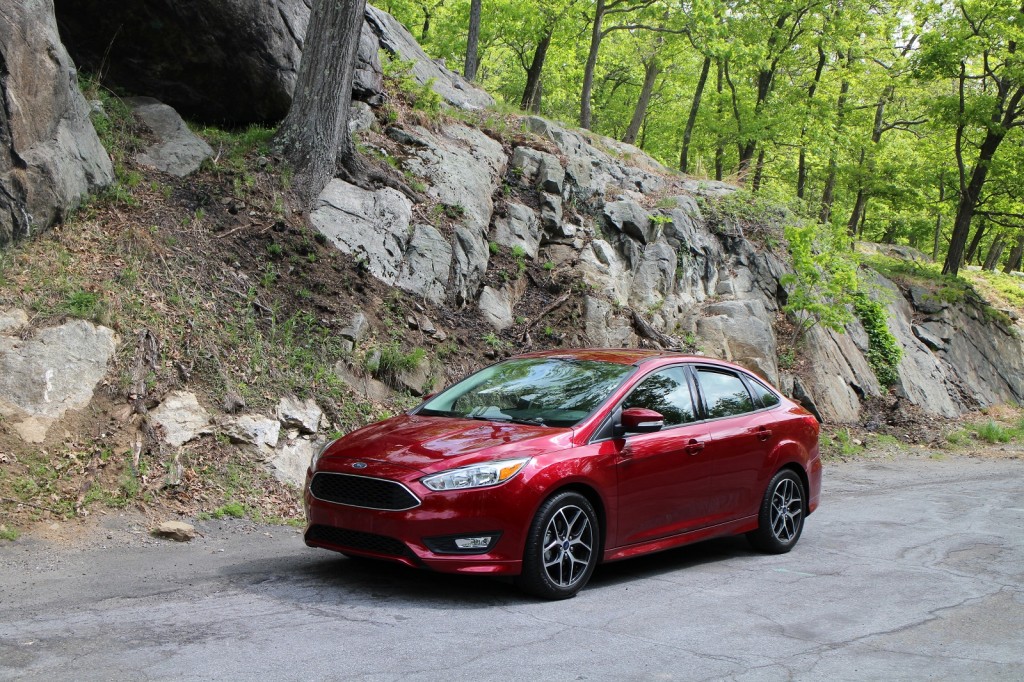 We did notice an occasional hesitation as it switched off, with the tach needle dropping first to about 500 rpm and then to zero as the engine went off entirely.

While stopped, the air condiioning stayed on at a reduced level and we generally got more than 60 seconds of battery power before the engine switched itself back on.

But we have to think that such a system, once manual-shifters get used to putting the car in neutral at stoplights, saves notable fuel in stop-and-go traffic--especially in dispersed suburban mall locations with 90-second traffic-light cycles.

As we wrote after our short drive, we liked the Focus EcoBoost, and would put it at the top of the list if we were buying a Focus sedan.

If only more Americans were qualified to do so. [sigh]

It's not cheap, though. The three-cylinder EcoBoost package on the 2015 Focus adds an additional $1,495 to the tab of whatever trim level you specify. The base Focus SE now starts at about $18,500. 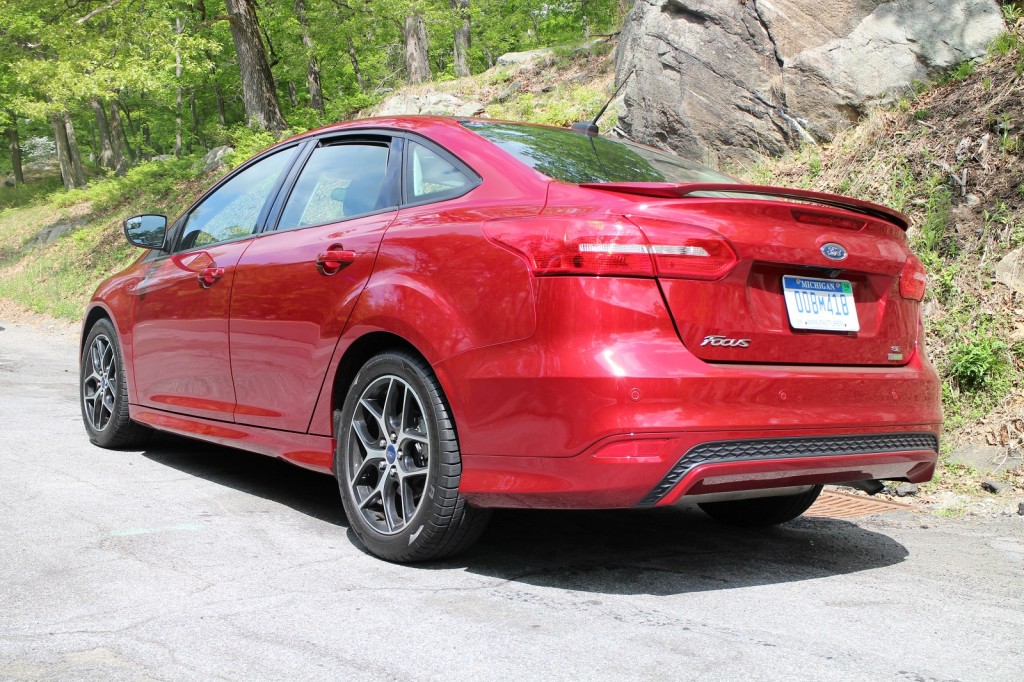 Our 10-day test car, the exact same one we drove briefly last month,

Our car also had a $695 Cold Weather package, consisting of heated seats, steering wheel, and mirrors, plus all-weather floor mats, and a $255 Reverse Sensing system.

Add in the mandatory $825 "destination and delivery fee," and our red test car with a plain black interior came to a total of $22,075.

And that's without a number of the nicer options, including a two-tone interior, a better audio and infotainment system, and various electronic safety systems like adaptive cruise control. 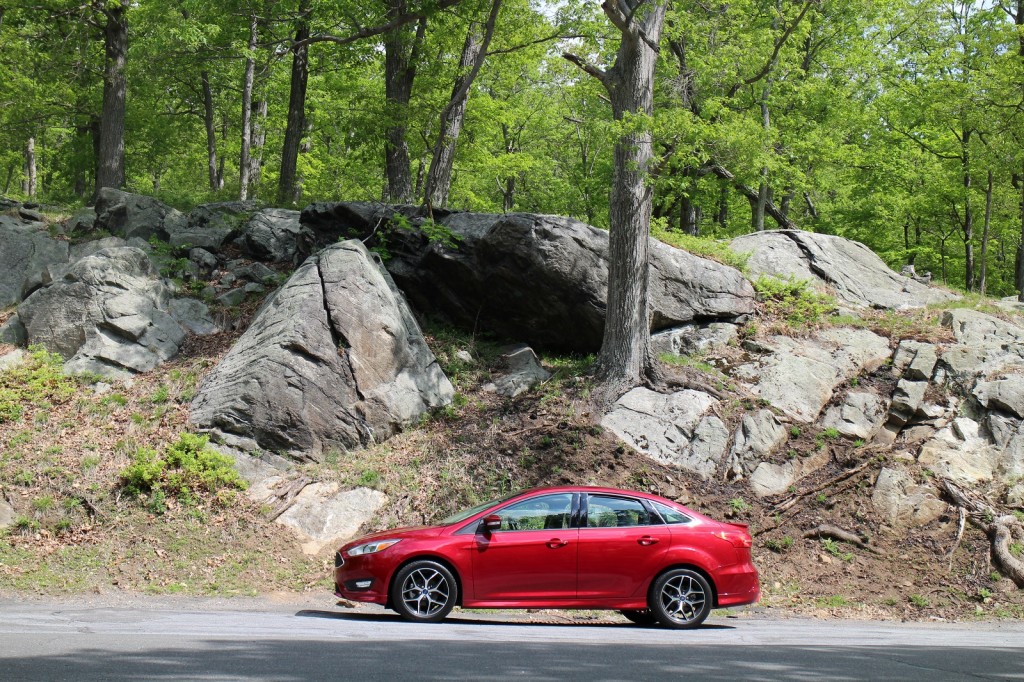 Adding that $1,500 uptick to an EPA fuel-economy rating boost of just 2 mpg, plus the manual-only configuration, and we suspect we won't see a lot of three-cylinder Focuses on the roads.

But it does give Ford a higher gas-mileage rating to tout for its high-volume Focus line.

Hey, they may be great used-car bargains, right?