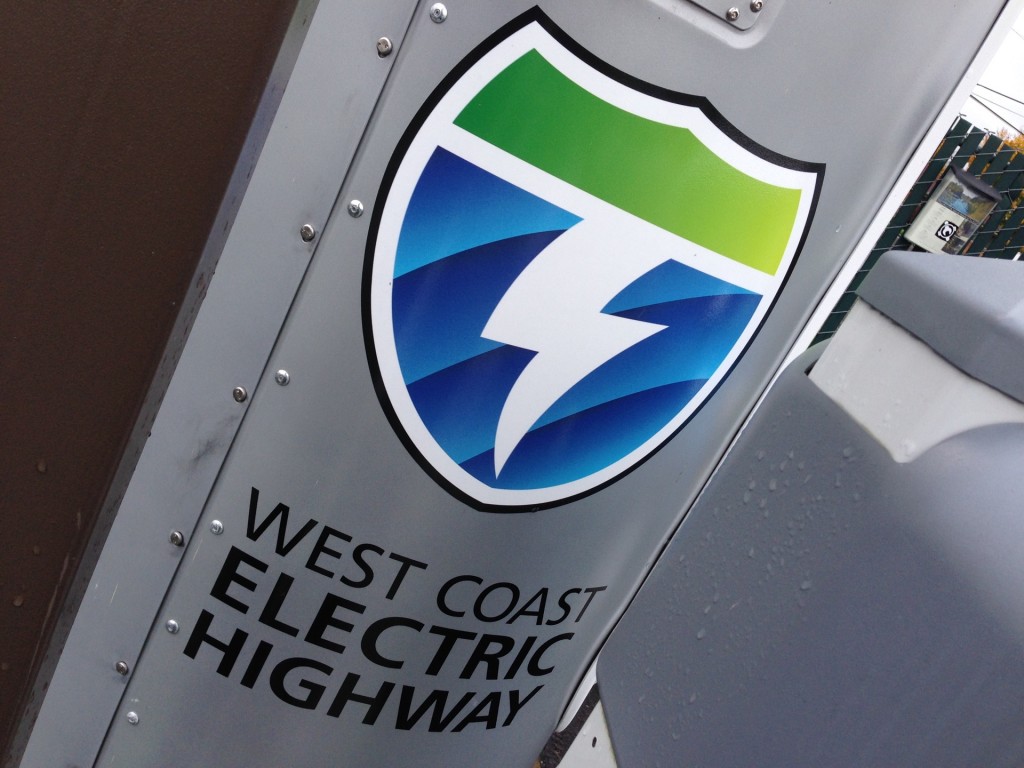 If you’ve been thinking of making a electric-car road trip, the Pacific Northwest is a good place for it.

And a quick study of the ‘Electric Highway Map,’ released by the West Coast Electric Highway earlier this year [and at the bottom of this page, as well as here], makes it easy to understand why.

The map lays out—not necessarily to scale, and in the format of a subway or public transportation map—the network of charge points in a colorful, easy-to-understand way.

The West Coast Electric Highway is essentially a network of chargers along many highways, rather than a single route (I-5 is essentially its backbone, however).

Most of the charge points are spaced 20 to 30 miles apart, which should give multiple options for general convenience or if a charger is temporarily out of service. But a few stretches between chargers go 50 or 60 miles and could require some careful, efficiency-minded driving with some of the electric cars on the market.

Mileage isn't the only factor, of course

What the map doesn’t show, of course, is the topography; and in the Pacific Northwest, that can be the other factor that can dramatically affect range. So can driving style, or even strong winds.

This Electric Highway is part of the West Coast Green Highway, a broader effort organized by the Washington State Department of Transportation, including natural gas, biodiesel, ethanol, and hydrogen options along the 1,350 miles of I-5 spanning from the U.S. border with Canada, through Washington, Oregon, and California, to the U.S. border with Mexico. 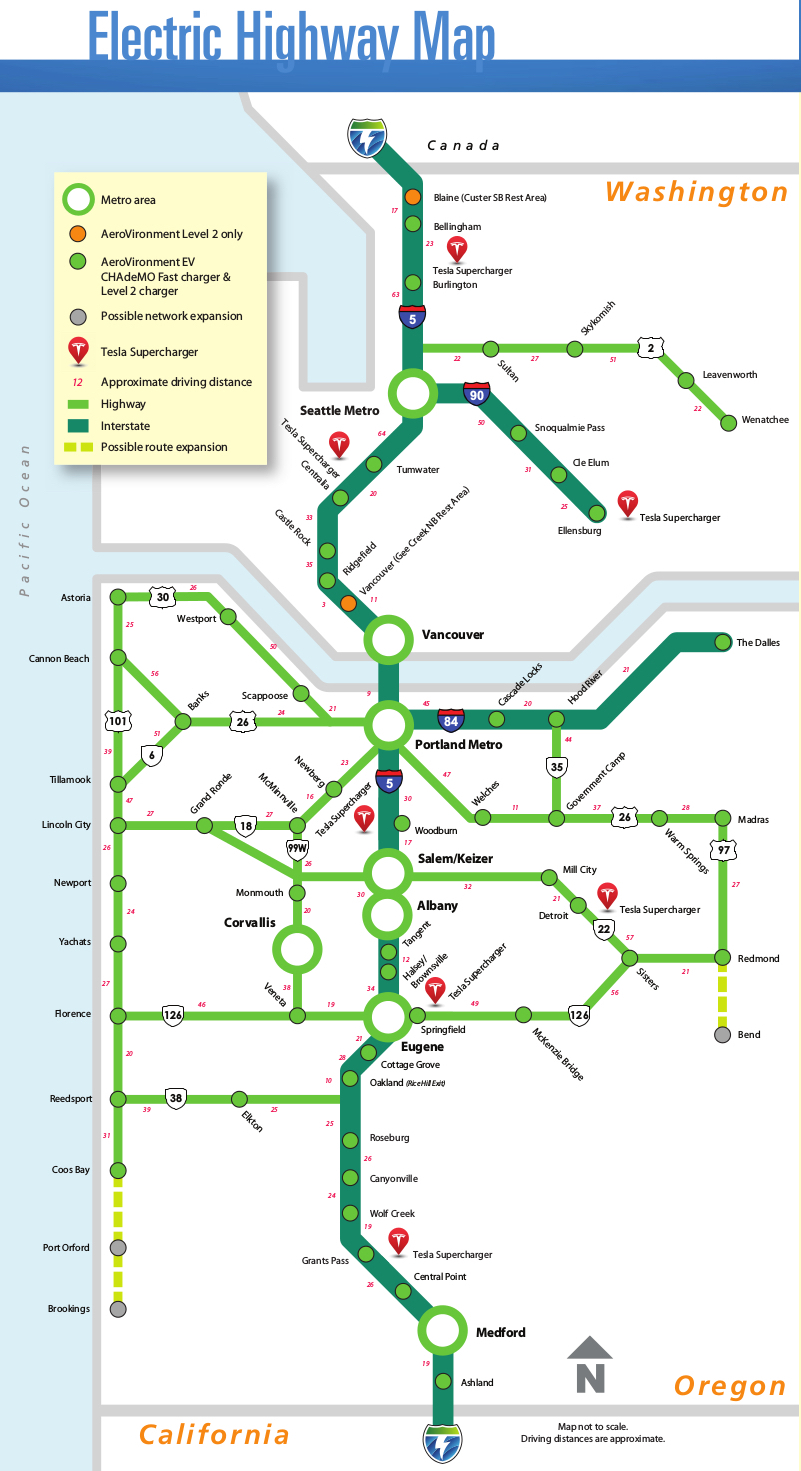 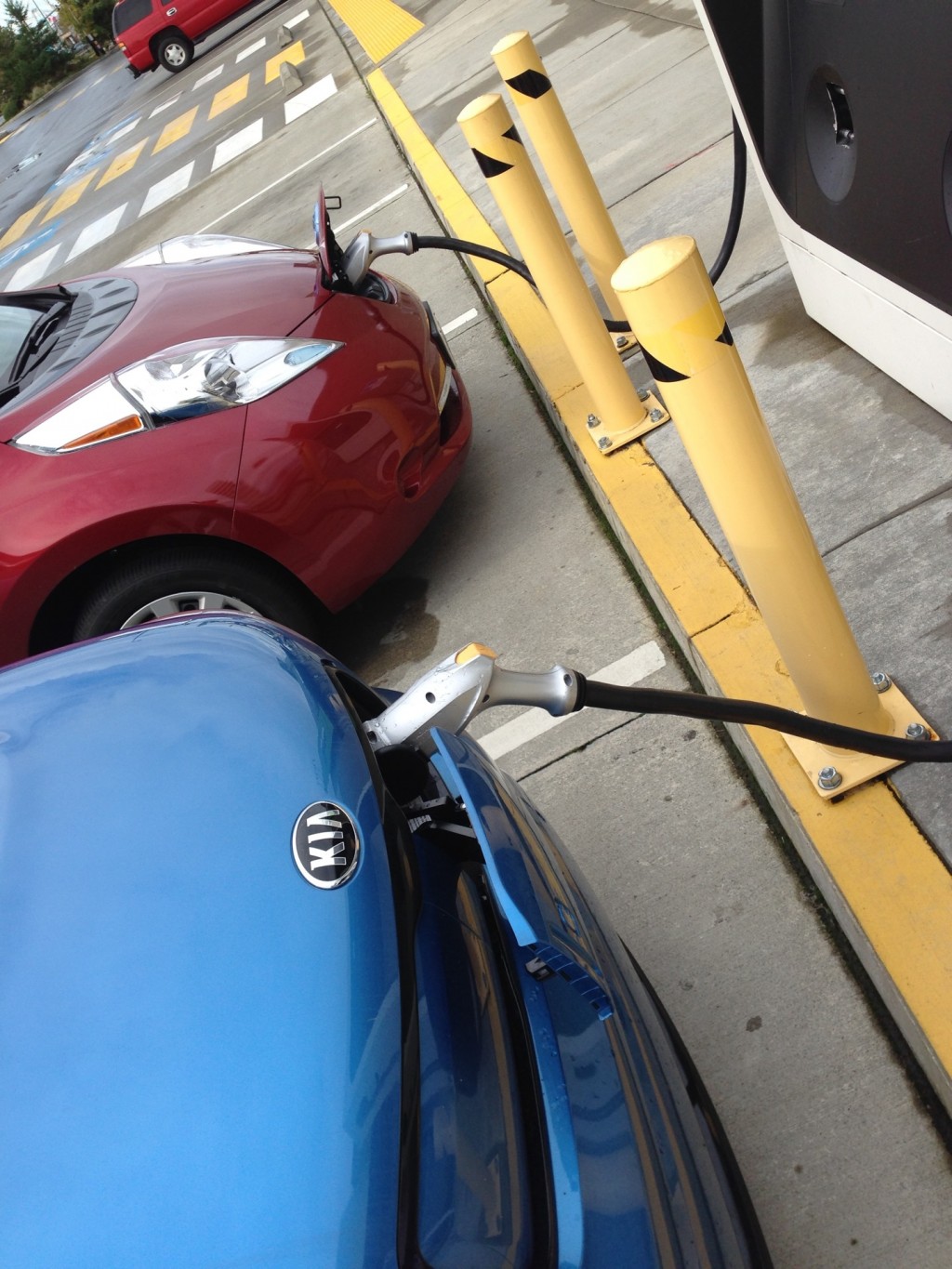 In Oregon and Washington, where state and local officials have cooperated and encouraged charger installation where it’s needed—putting together a network that makes sense for road trips and electric-car ‘eco-tourism’—it adds up to a remarkably usable and convenient network.

Many gaps remaining in California

As much as you might think California would be in the lead here, it isn’t. While you have plenty of places to charge an electric car if you’re in the Los Angeles basin, the stretch south to San Diego, or in the San Francisco Bay Area, your options are surprisingly limited.

You still can’t smoothly drive an electric car from Los Angeles to San Francisco, unless you have a Tesla Model S or are willing to subject yourself to the slower Level 2 charging that takes many hours.

There’s still no fast charger from Ashland, Oregon, which isn’t far from the state border, to the Chico, California area—around 200 miles away.

Taking Highway 99 from Merced to Visalia, for instance, on the way from San Francisco to LA, is nearly 100 miles—not doable for most EVs, and definitely not doable if you’re only at 80 percent from a fast charge.

To remind you, here are the official EPA ranges of most of the all-electric models currently (or recently) on the market that offer CHAdeMO or Tesla Supercharger fast-charging [sorry, Combo-plug users, you’re out of this for now]. Be sure to multiply those maximums by 80 percent for portions that you drive after fast-charging; and keep in mind that highway-speed driving will likely return a lower usable range.

Thinking about taking an EV road trip? There are other electric highway trips that work in the U.S. You can go from Nashville to Atlanta with fast chargers along the way, and there are a number of East Coast possibilities.

We recommend that you not limit yourself to any one network (Blink, OpConnect, ChargePoint, etc.). Make sure you can use all of them, and use PlugShare to plan your route and charge points, to incorporate any additional chargers that might be part of major-metro area initiatves, as they can be a great supplement to highway networks.

And we strongly recommend that you install the PlugShare app on your smartphone for no fuss location of the charging facility and on-the-fly checking of charger status.