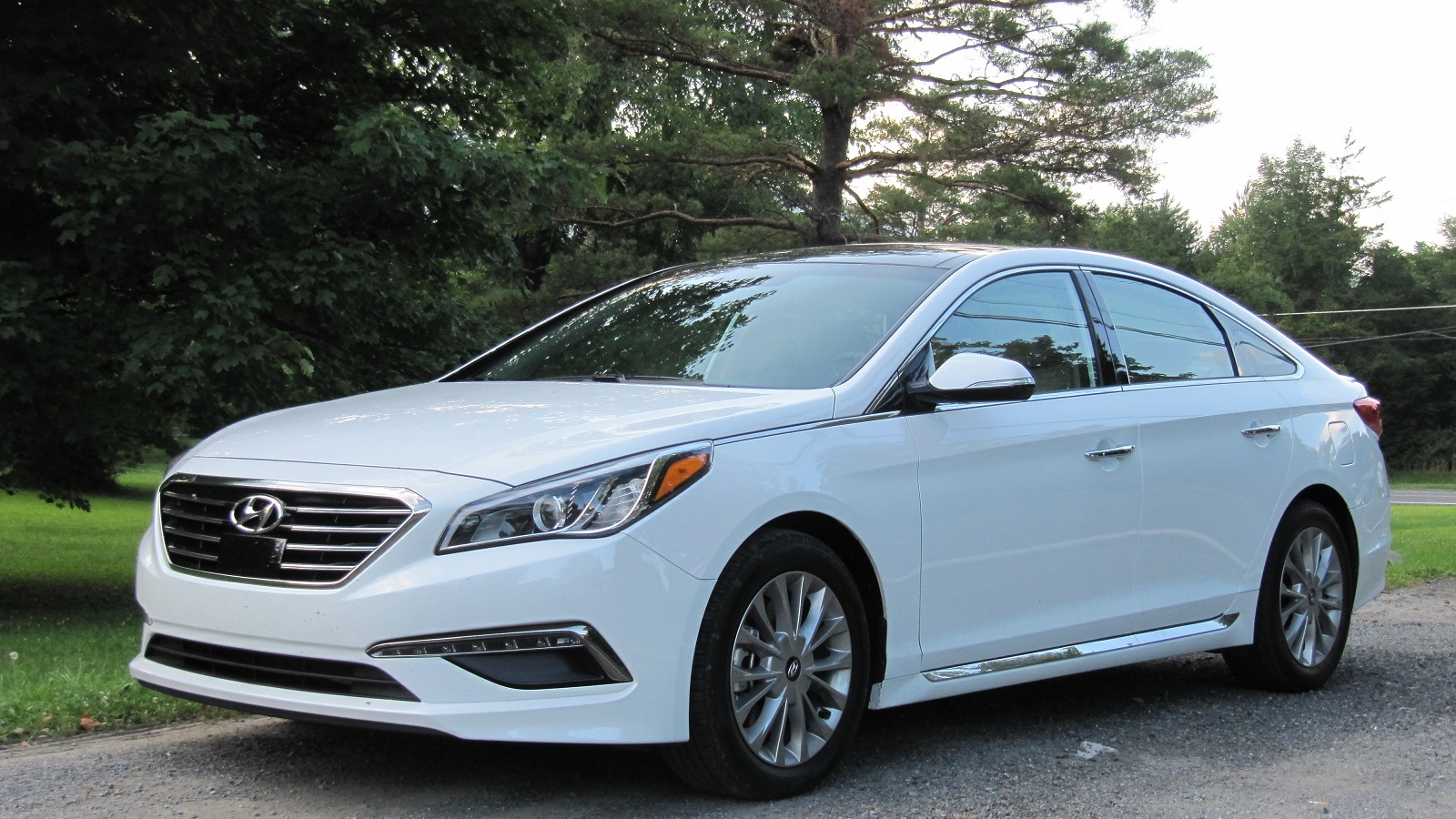 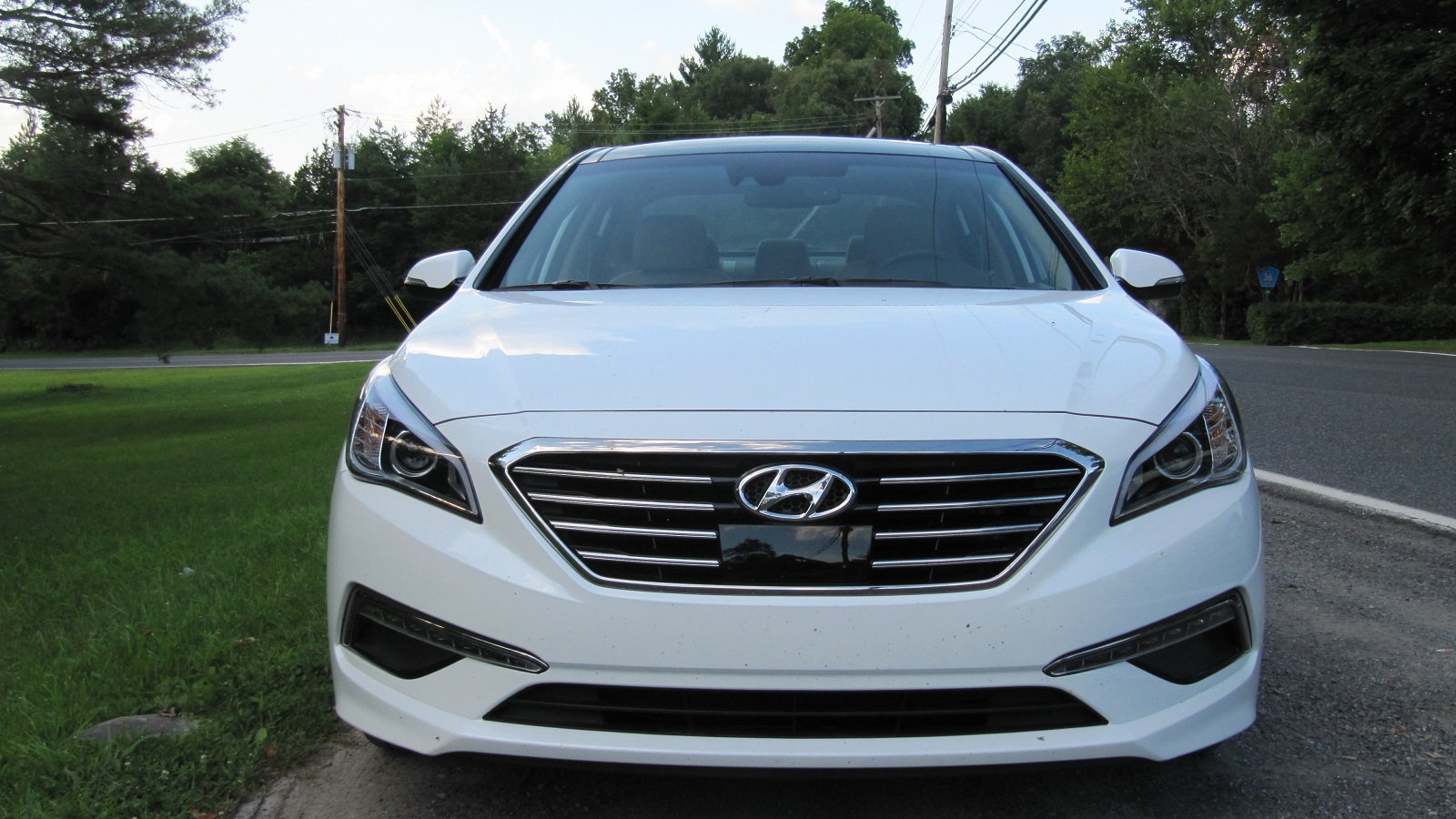 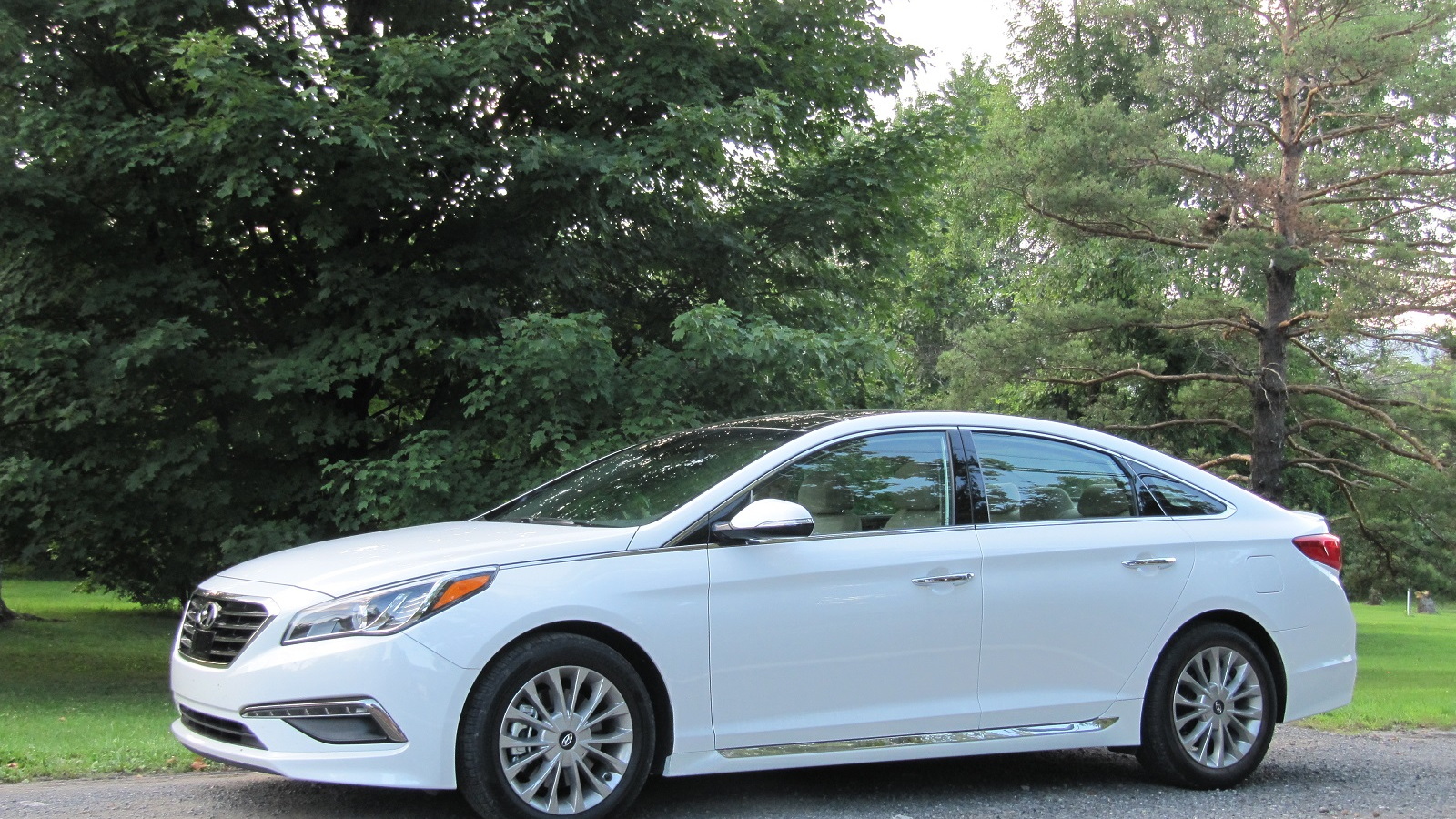 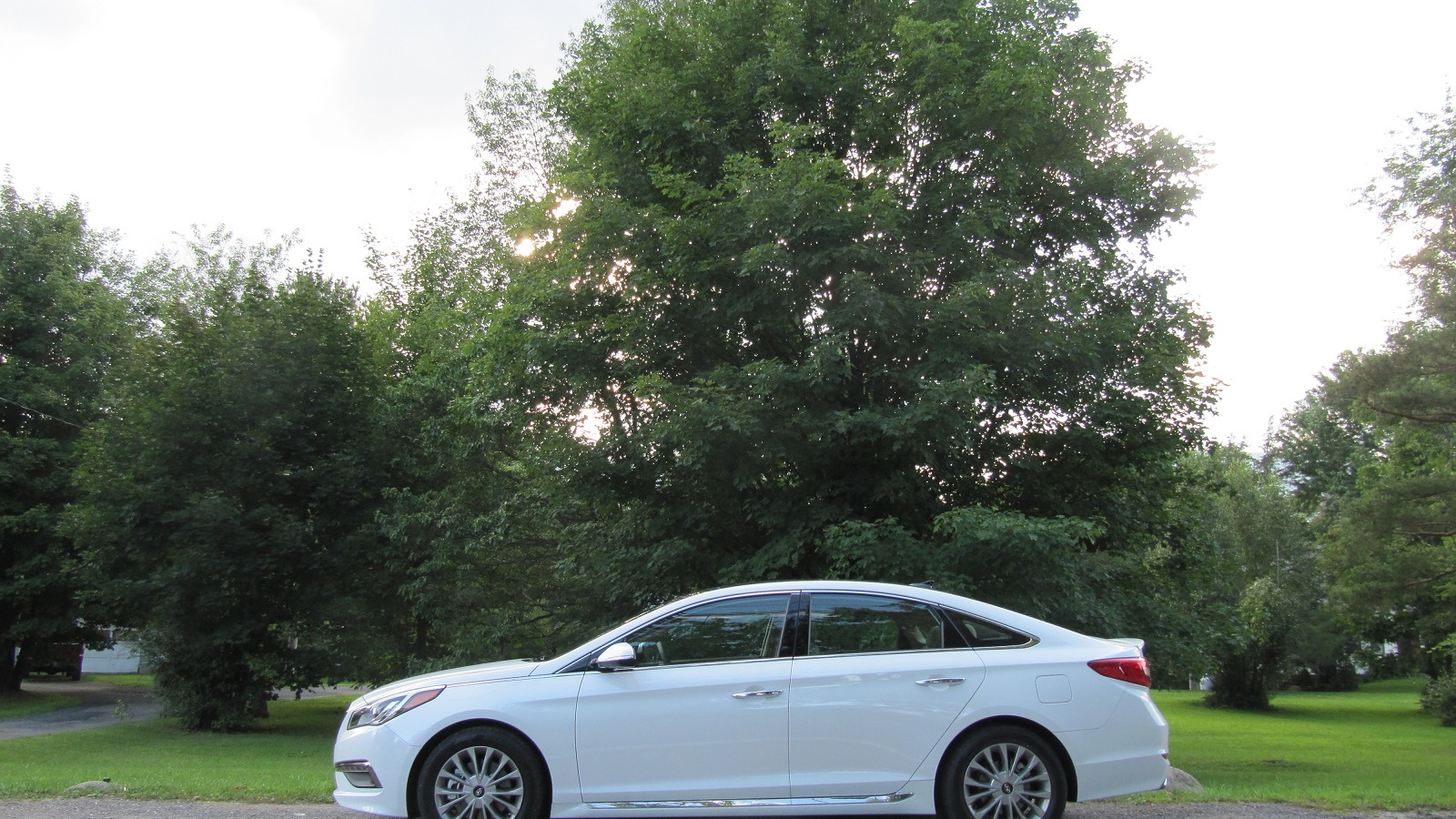 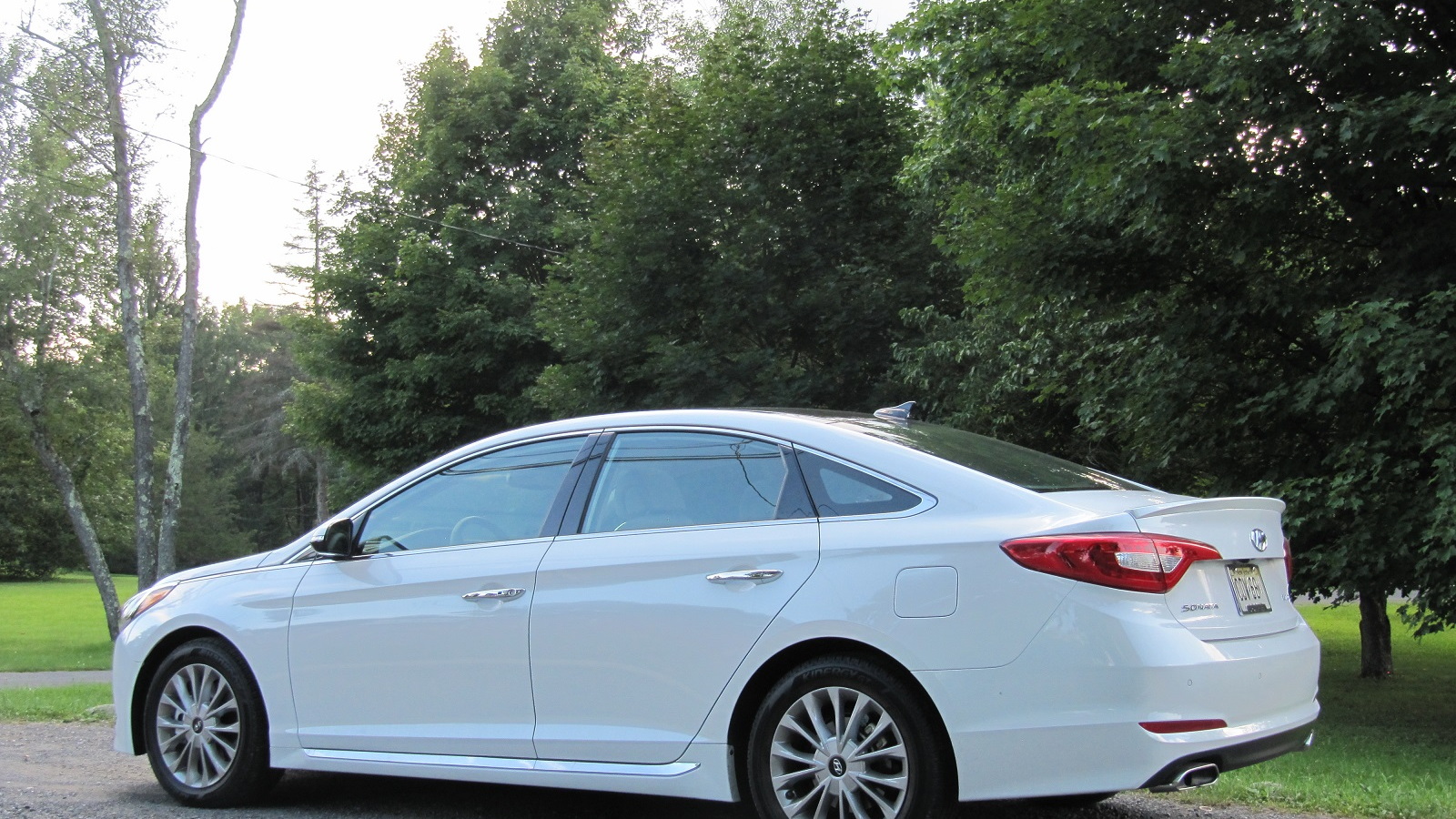 The new one, not quite so much: To our eyes, there's very little aside from the badges that identifies it as a Hyundai.

We spent a few days with a 2015 Hyundai Sonata Limited, a test car so new it didn't even have a window sticker, to see if it improved on the gas mileage of its predecessor.

[UPDATE: Hyundai later provided us with a complete window sticker for our test car; see end of article for the full rundown.]

The new base model of 2015 Sonata gains 1 mpg combined on the superseded 2014 base car:

That compares to 2014 ratings for the base car that were 1 mpg lower in combined and city rankings, and 2 mpg lower for the highway cycle.

Our 2015 Sonata Limited was powered by a 185-horsepower 2.4-liter four-cylinder engine paired with a six-speed automatic that drives the front wheels.

Overall, we logged 30.4 mpg on a 362-mile test drive that broke down to about two-thirds highway miles and one-third city stop-and-go and suburban traffic.

That's better than the combined rating of 28 mpg, though not quite as high as we might have hoped for from the highway-heavy drive cycle.

For the very best gas mileage in the new 2015 Sonata lineup, however, there are two other choices as well.

The first is the 2015 Sonata Hybrid, which is a carryover model using last year's design; its ratings are unchanged at 38 mpg combined (36 mpg city, 40 mpg highway).

The other is a new 2015 Sonata Eco model that will follow the launch of the volume versions by a few months. It uses a smaller 1.6-liter engine and the same six-speed automatic, and is expected to earn ratings of about 32 mpg combined (28 mpg city, 38 mpg highway).

ALSO SEE: Why My 2014 Chevy Volt Uses Less Gas Than My All-Electric Car Did

We hope to test the Sonata Eco once it's on sale.

Hyundai says it's retuned the carryover 2.4-liter engine to make it more responsive at low and mid-range engine speeds.

That's largely true, and in gentle to medium driving, the new Sonata is smooth, quiet, and comfortable--more so than the previous model, which could get raucous.

The body structure has also been stiffened, and the car scores well on refinement in normal usage.

The one glaring exception to this is the Limited model's adaptive cruise control, which is one of the clumsier, coarser, and least pleasant such systems we've tested.

In comparison not only to various German luxury sedans, but even to the 2015 Subaru Outback we tested the previous week, the 2015 Sonata's adaptive cruise feels abrupt, slow to react, and jerky in both acceleration and braking.

Granted, the Subaru had a continuously variable transmission (CVT) that may have made power transitions smoother and more gradual.

Still, we were startled when a steady uphill grade at highway speeds caused the Sonata's cruise-control system to oscillate between two gears: 10 seconds in one, downshift to a lower gear for 10 seconds, upshift for another 10 seconds ....

Other than the coarse cruise control, the new Sonata Limited proved itself a pleasant, innocuous, and comfortable mid-size sedan.

Behind the wheel, we were impressed by the weighting and feedback of the electric power steering, something that many automakers don't seem able to get right

Of the three drive modes--Normal, Eco, and Sport--we largely used Normal, as the Eco produced the usual frustrating slower response--tedious in traffic

There's also a manual gear-selection mode ("S") on the shift lever, though no steering-wheel paddles; in a car like this, do people ever actually shift for themselves?

A few further impressions of the new 2015 Sonata:

While less distinctive than its predecessor, the 2015 Hyundai Sonata is more refined and appears to be marginally more fuel-efficient--though we're really waiting for the Sonata Eco model with the smaller engine.

Meanwhile, we expect the mainstream versions to sell as well as the previous model that put Hyundai into serious contention in the mid-size sedan segment--and perhaps better.

UPDATE: Our 2015 Hyundai Sonata Limited test car carries a base price of $26,525, with a list of standard features far too lengthy to reiterate here.

A $3,500 Tech Package added the panoramic sunroof, a navigation system with an 8-inch touchscreen, xenon headlamps, the heated and ventilated front seats, memory function for the seat and mirror positions, and a high-end audio system with satellite and HD radio, among other features.

The only option was a $150 package of carpeted floor mats. Adding the mandatory $810 delivery fee, the bottom line on our test car came to $32,510.