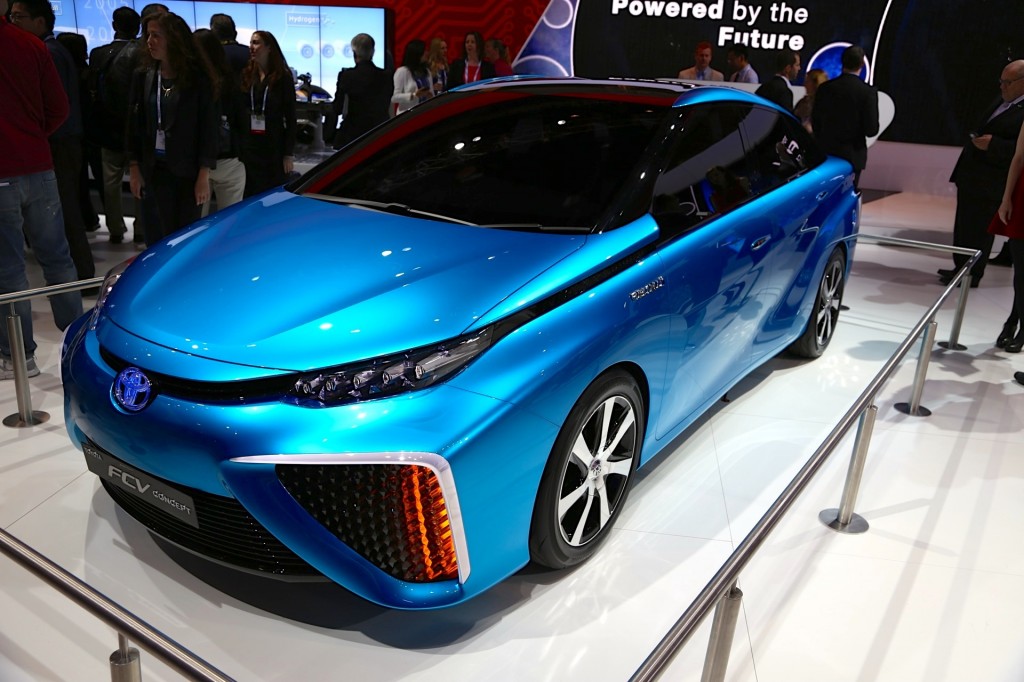 As quoted in Automotive News, the 39-year veteran of the Toyota Motor Company said: "The cruising distance is so short for [electric cars], and the charging time is so long ... At the current level of technology, somebody needs to invent a Nobel Prize-winning type battery."

While those words could make electric-car advocates see red, it's worth following Kato's logic. If nothing else, it offers some insights into the perspectives of electric-car skeptics in the auto industry. 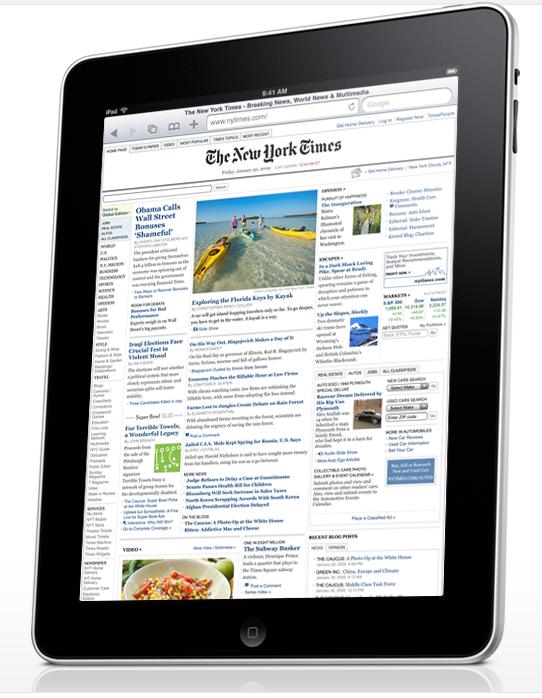 Foot in each camp

With feet in both the hydrogen fuel cell and electric-vehicle worlds, I believe I understand Toyota's logic. I also see the value in pursuing automotive fuel-cell development, even as I expect batteries to dominate transportation in the coming decades.

Why do I think this?

Note that while Apple sells way more iPads and iPhones, it still makes Macs and MacBooks--personal computer forms that have been around for more than 30 years now.

Pure battery-electrics are a fantastic fit for most people's transportation needs, but "most" isn't the same as "all".

There will remain an enormous vehicle market globally that must move toward emission-free vehicles--and hydrogen fuel cells can serve as range extenders where high range and fast refueling remain important.

Back to Kato's dismissive assessment of battery power on behalf of his company.

Many electric-car fans and advocates may wonder if Kato hasn't heard of the Tesla Model S electric luxury sedan, with EPA-rated ranges of 208 and 265 miles. Using the expanding network of Tesla Supercharger DC fast-charging sites, the car can recover 170 miles of range in a half-hour's Supercharging.

Toyota itself owns a small portion of Tesla Motors, by the way, so Kato could reasonably be expected to know a bit more about Tesla than what he reads in the general press.

But Kato's comments are those of an R&D Chief whose company which needs to figure out how to produce emission-free vehicles in volume, ultimately at the $15,000 price of its Yaris subcompact.

Tesla doesn't need to worry about that, having positioned itself–and brilliantly so–as an aspirational brand.

While the price of lithium-ion batteries has come down about 8 percent per year for the past 20 years, R&D chief Kato is probably feeling pretty good about his fuel cells coming down at 22 percent per year over the past 12 years. (Toyota claims its fuel cell system costs dropped 95 percent in 12 years.)

Since Toyota's first production run of its Fuel Cell Sedan model is planned for about 1,000 cars per year–four cars per weekday, or roughly the production levels of the Tesla Roadster several years ago–there will be a lot of labor cost in that $50,000 fuel cell system.

Between automation, economies of scale, and technological progress, Kato may be confident about knocking another 22 percent per year out of his fuel-cell costs for years to come.

At that rate, costs would halve every three years – if sales volumes arrive. And yes, that is an enormous 'if'.

(There's also the issue of cost per kilowatt of power to the wheels--which I'll have to address separately to prevent topic sprawl.) 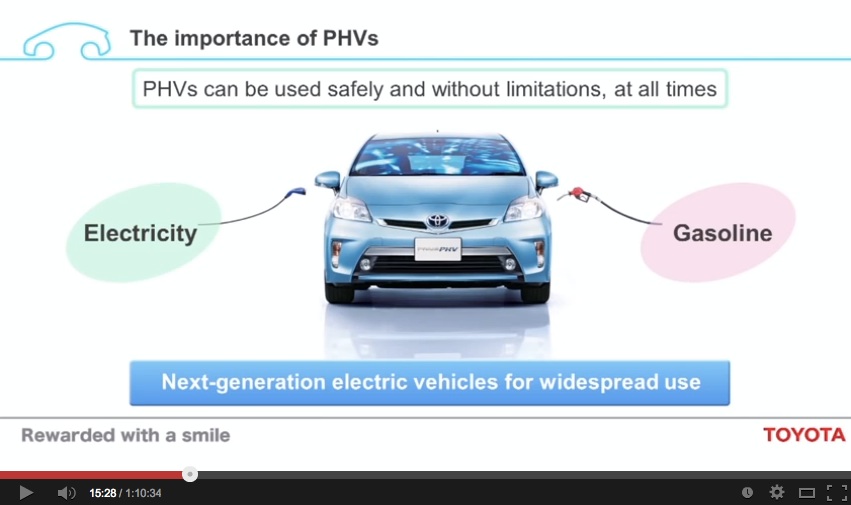 A "match every spec" philosophy

It's also clear Kato thinks that future cars must match the specifications of the fossil-fuel incumbents: 300-plus miles of range along with 5-minute recharging / refueling.

Since plug-in hybrid electric vehicles meet these requirements, the plug-in version of the Prius is probably safe for the foreseeable future. Indeed, in its fuel cell vehicle unveiling, Toyota highlighted the importance of plug-in hybrids.

And this core belief is why Toyota diverges from pure-electric proponents, who believe car buyers will change their expectations and adapt to battery-electric vehicles.

Almost no one ever truly needs 300 miles of range, or instant refueling, they say. Unfortunately for electric-car advocates, human nature tends to lean in Toyota's favor.

Try this thought experiment: Ask yourself if you know anyone who would buy a Nissan Versa if it had about 80 miles of range and took several hours to refuel, even though it would be possible to gas up at home each night.

No one would buy that car, when other models offer so much more convenience. As the saying goes, "ease of use equals use".

Toyota's earlier experience with hybrids probably reinforces their "match-every-spec" philosophy. The Prius came to the U.S. around the same time as the Honda Insight.

The Insight sold in very low numbers, as most two-seaters do: Even if Americans drive alone most of the time, they expect their cars to seat four friends.

The conviction that drivers will only adopt alternative-fuel vehicles en masse when they don't have to change their behavior may also explain the California Air Resources Board's much-maligned decision to award fuel cell vehicles more ZEV credits than battery-electrics. 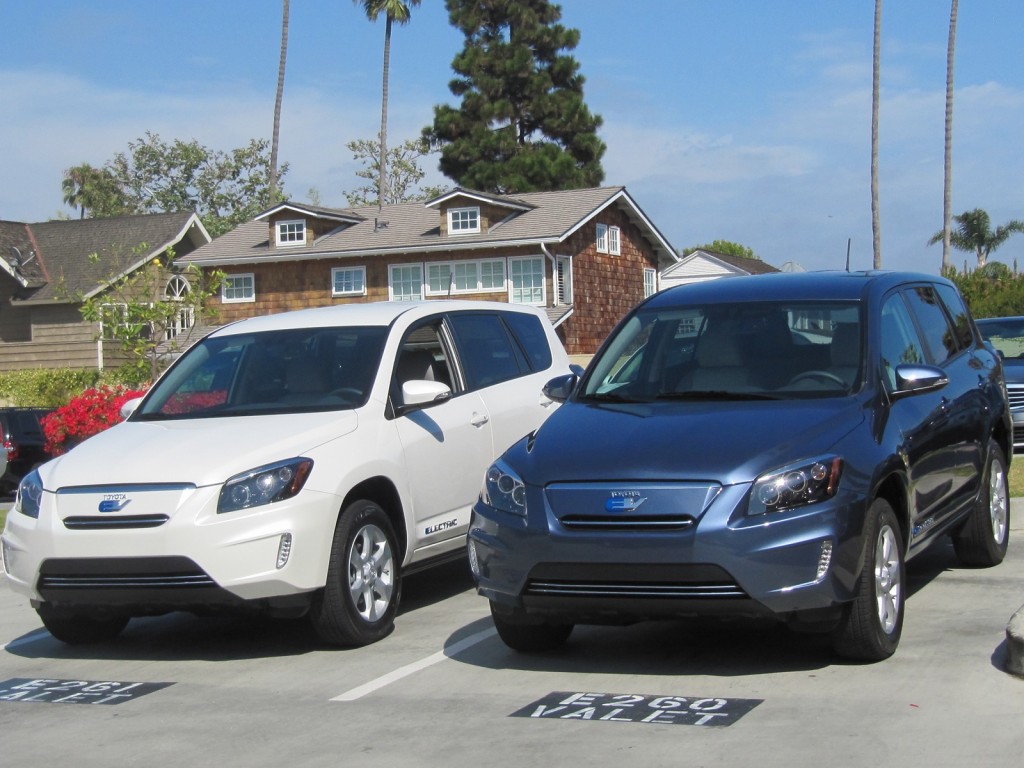 We could sum up Toyota's position by saying it thinks pure electric vehicles are netbooks: compromised products that only appeal to that very small slice of the population willing to change its expectations and behavior.

The company believes that as soon as something better comes along–in its eyes, hydrogen fuel-cell vehicles–the average driver will choose that alternative, rather than battery-powered vehicles.

Toyota probably has a lot of market research to back this up, too.

But sometimes you have to ignore market research. As Henry Ford is frequently but incorrectly credited as saying, "if I had asked people what they wanted, they would have said faster horses." 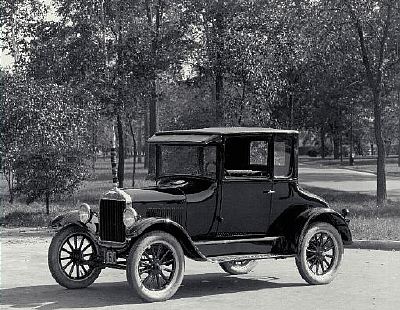 (It's worth noting that Ford's tone-deafness to customer desires almost sank his company when it finally retired the outmoded Model T in 1927 several months before putting the more modern Model A into production.)

But if no one would buy a Nissan Versa offering 80 miles of range and a refueling time measured in hours, how could the Leaf be approaching 150,000 global sales--and accelerating?

I'd bet a bitcoin it's because there's something deeply satisfying about plugging your car in at home every night–something that wouldn't register in market-research studies of drivers who don't yet own electric vehicles.

(They're also far cheaper per mile to run, but that's a different issue.)

And that lack of awareness may be the reason for Toyota's blind spot. 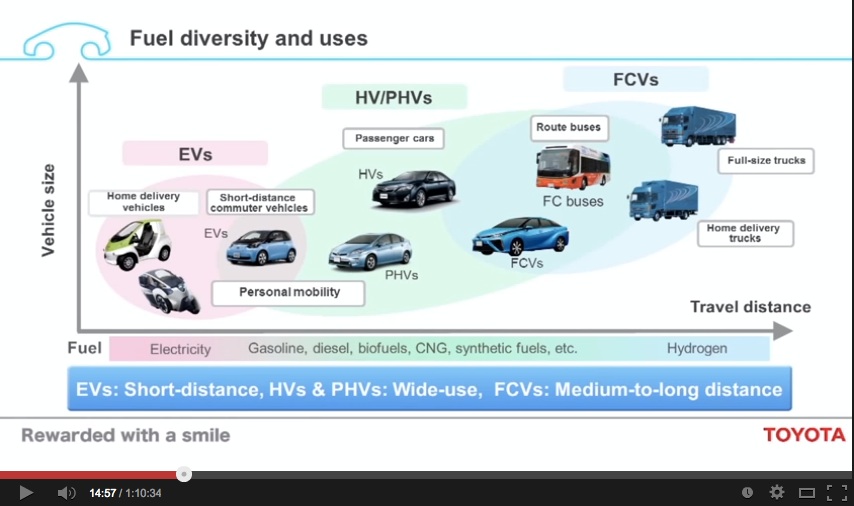 The key lesson from disruptive innovations is that you can seize a market with a product that is inferior in several aspects, as long as it does one thing spectacularly well.

Take the first Apple iPad: it had a smaller screen than most laptops, and typing on it was cumbersome. But its touch interface more than made up for all of that, and successive generations of iPads have been spectacular hits.

Judging by the metrics Toyota cares about, battery-electric vehicles are inferior, with less range and longer recharge times than their combustion-based cousins.

This should be enough to consign pure electric vehicles to niche status–except that they do something spectacularly well, something that more than makes up for everything else.

Though they offer a superior driving experience, I'd argue that home recharging is the key. 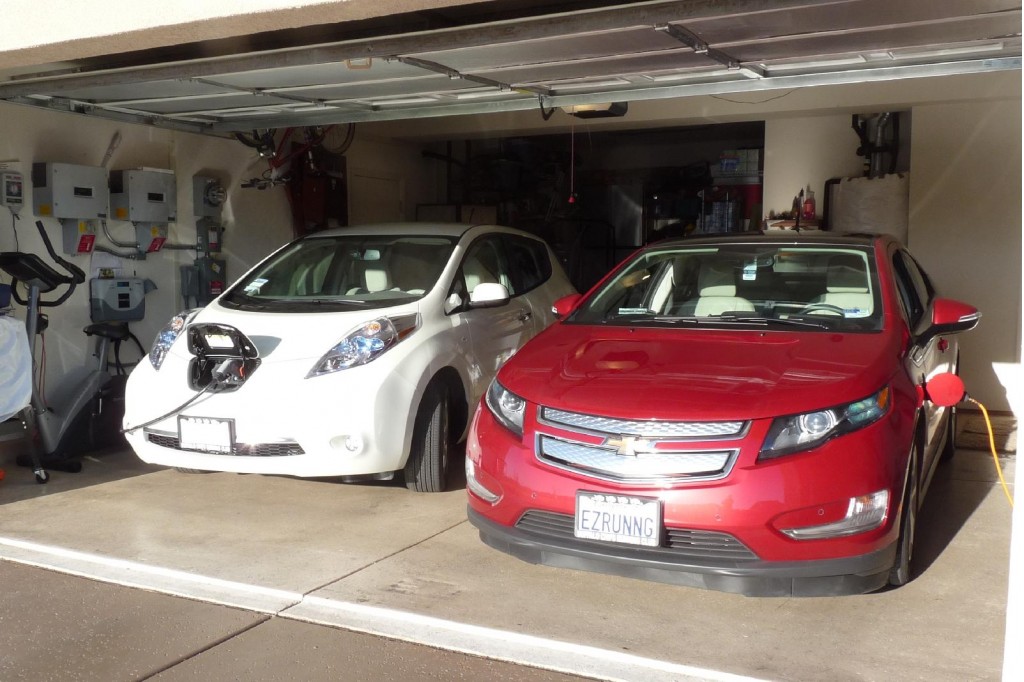 I'd bet you a second bitcoin that if electric-car owners were wired up and asked how they felt about recharging their cars, scientists would detect an endorphin rush in the pleasure centers of the brain.

Progressives may feel good about having chosen a more climate-benign vehicle; conservatives might feel they've helped with their country's (or community's) energy independence. Regardless of political leanings, I'm sure many buyers delight in keeping their money away from Big Oil.

Since most electric-car owners plug in every night, their vehicles give them this positive reinforcement hundreds of times per year.

Is it any wonder that in every year they've been eligible, the Consumer Reports customer satisfaction award has gone to a plug-in electric vehicle? (The Chevrolet Volt won in 2011 and 2012; the Tesla Model S grabbed the trophy in 2013.) 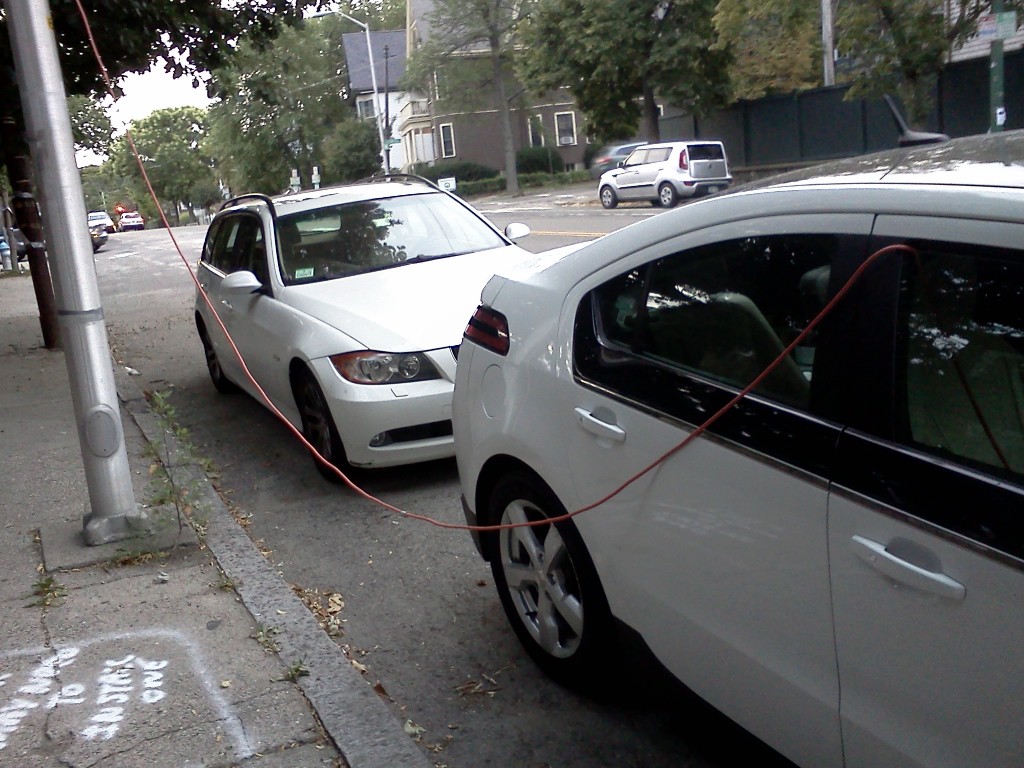 This is why I think battery-electric vehicles are like iPads: It's unlikely they'll ever match the range or refueling specs of gasoline (or fuel cell) vehicles – but they don't need to.

They do something else spectacularly well, instead. The iPad didn't (and still doesn't) need a physical keyboard to be an industry-upending success.

Battery vehicles aren't for everyone

As revolutionary as tablets are, we still continue to buy hundreds of millions of desktop and laptop computers every year. For many people (among them most professional writers), bigger screens, faster processors, and keyboards may still be essential.

Similarly, there are car buyers for whom battery-electric vehicles may never be practical.

MORE: How Far Would You Go To Charge Your Electric Vehicle?

About 15 percent of American households live in apartments or condos, and the trend toward increased urban density means this will probably increase, going forward.

While some forward-thinking cities now require developers to include charging infrastructure in new projects, it takes decades for housing stock to turn over, and landlords or condo councils tend to be–let's put this politely–frugal. 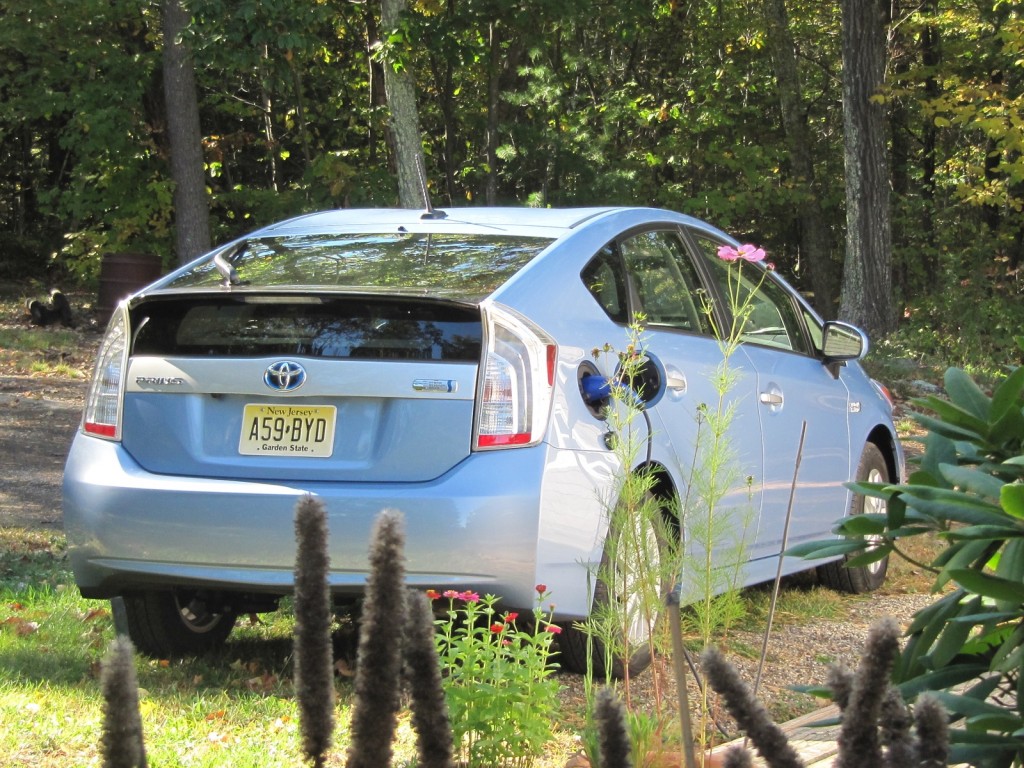 That means "outlet orphans" will be with us for a very, very long time. In the near term, plug-in hybrids are a fantastic way to electrify some of these drivers' miles, perhaps via charging at work.

The big opportunity for fuel cells–one that complements battery-electric vehicles instead of competing with them–comes in the longer term.

Fuel cells may one day displace gasoline engines in plug-in hybrids and range-extended electric cars, which will remain a massive part of the plug-in market for years to come. They will give drivers for whom battery-electric vehicles just aren't practical totally emission-free propulsion of their own.

Which may mean that Toyota's statement about its fuel-cell vehicles--it's the technology "for the next half-century"--could be true.

Even if the company doesn't see it quite the way that electric-car proponents and advocates do.

To provide some context on my perspective for this article, readers may want to know that I've spent almost my entire career on (mainly non-automotive) fuel cells.

I was a member of the team that won the Electrochemical Society's 2006 New Product Award, with a 1-kilowatt combined heat and power product for the Japanese market, which bought 50,000 units last year.

I'm also an early adopter of electric cars, having purchased a Toyota Prius Plug-In Hybrid the first month it was available in Canada--despite not being able to plug it in at my home. (How's that for commitment?) Thanks to Vancouver's extensive public charging infrastructure, 43 percent of our miles driven have been electric. I look forward to boosting that number when we move into a house with its own garage.

While it should be obvious, I'll emphasize that my opinions are my own, and may not reflect those of my employer.