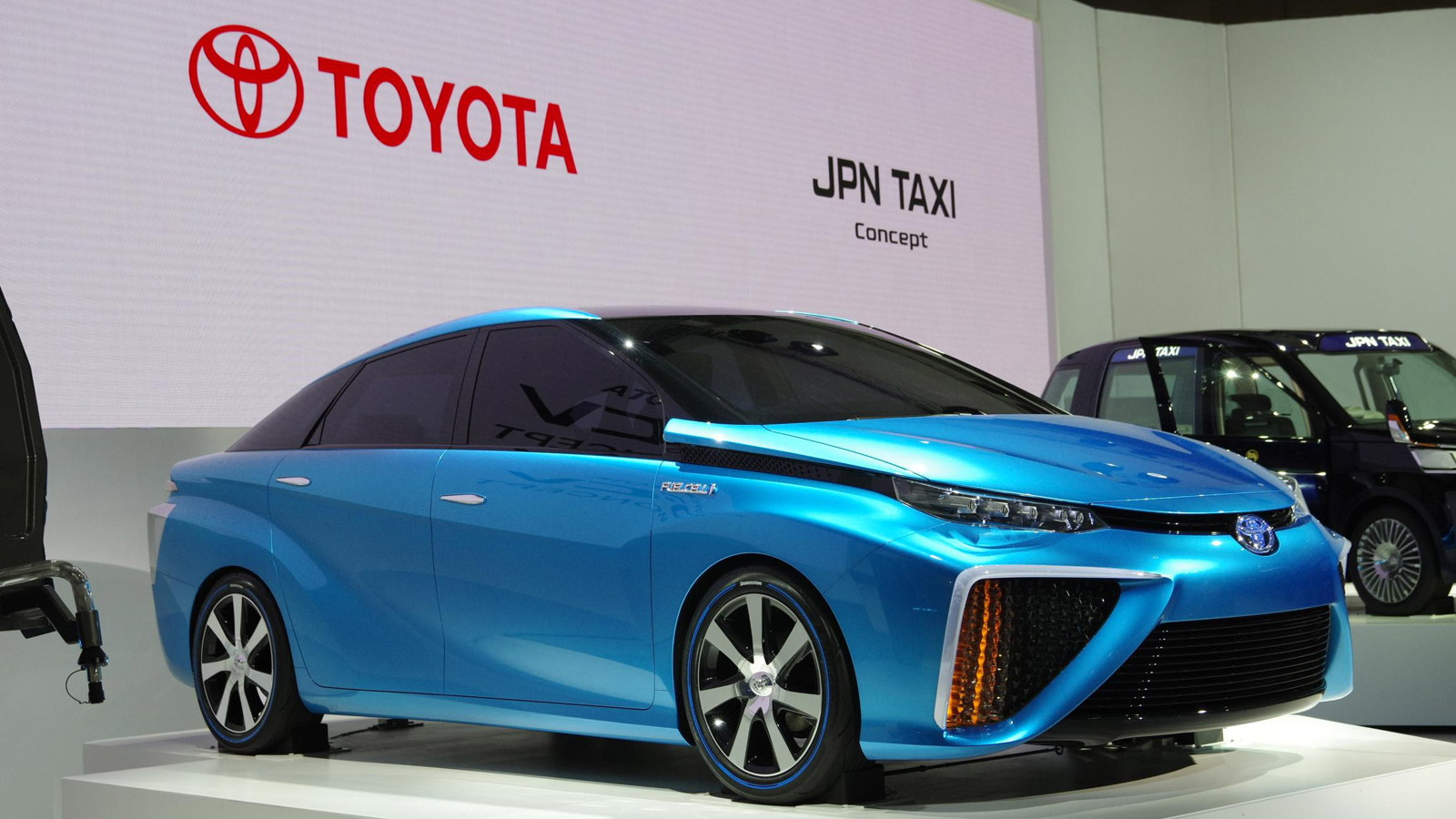 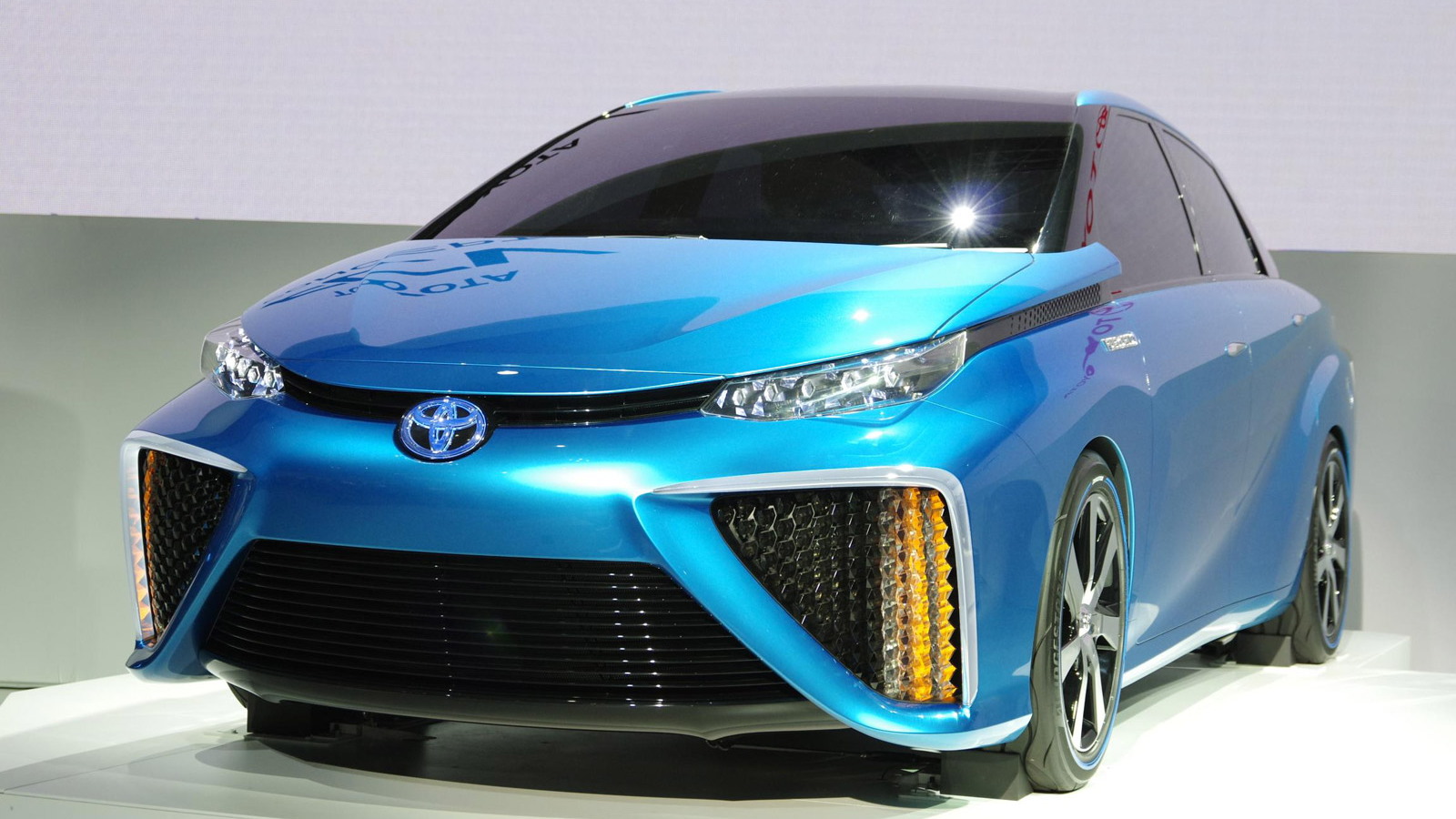 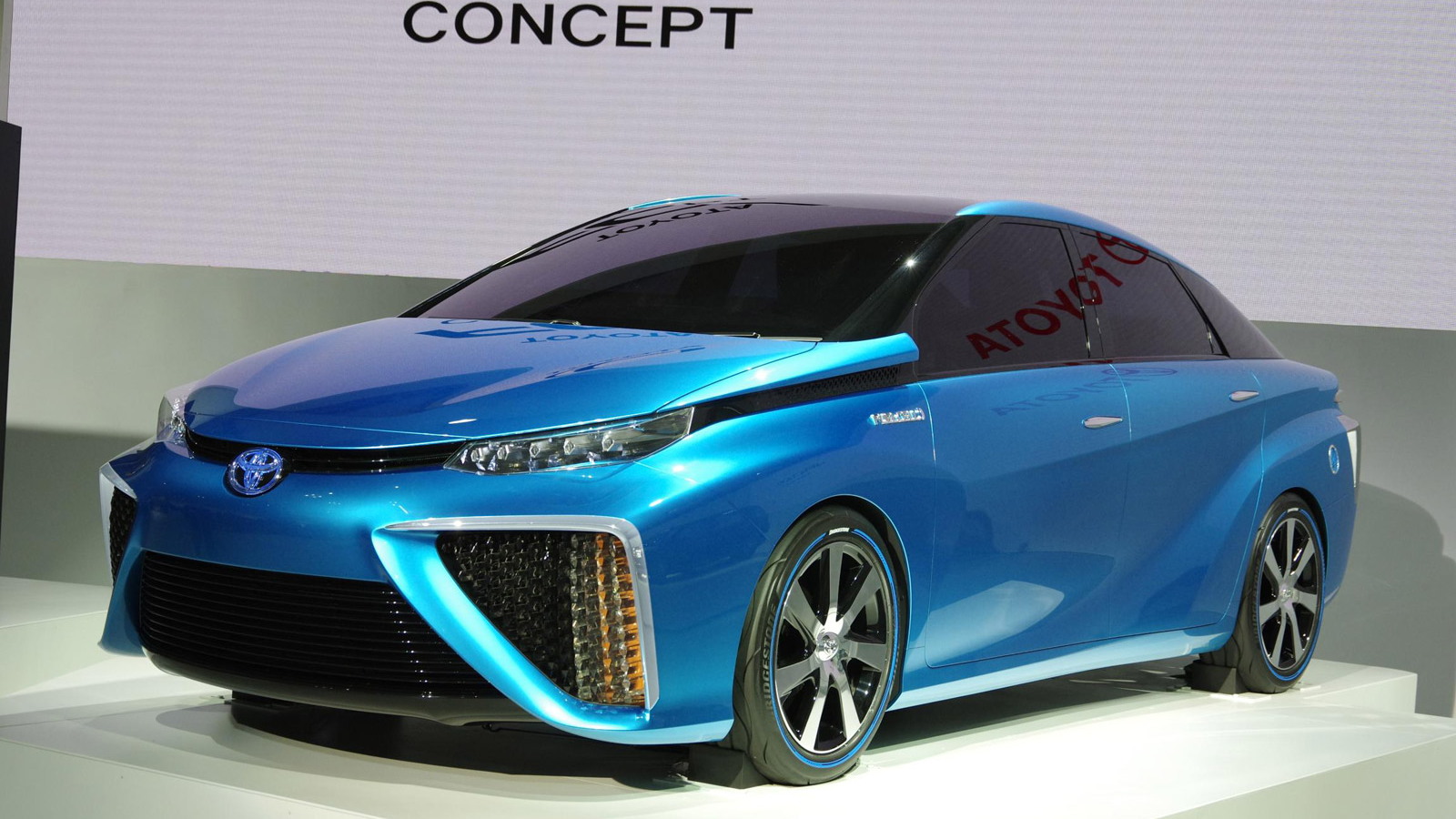 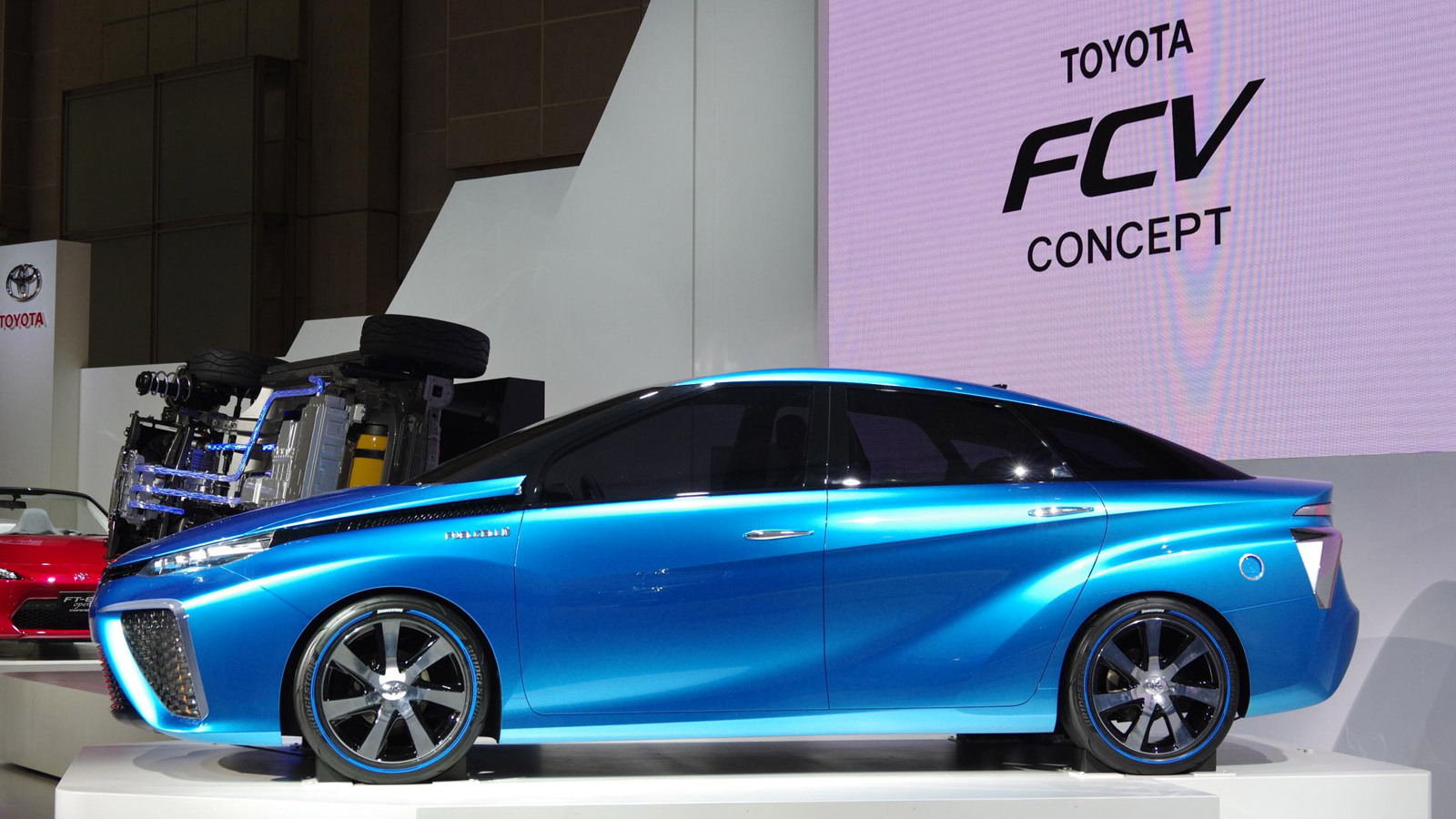 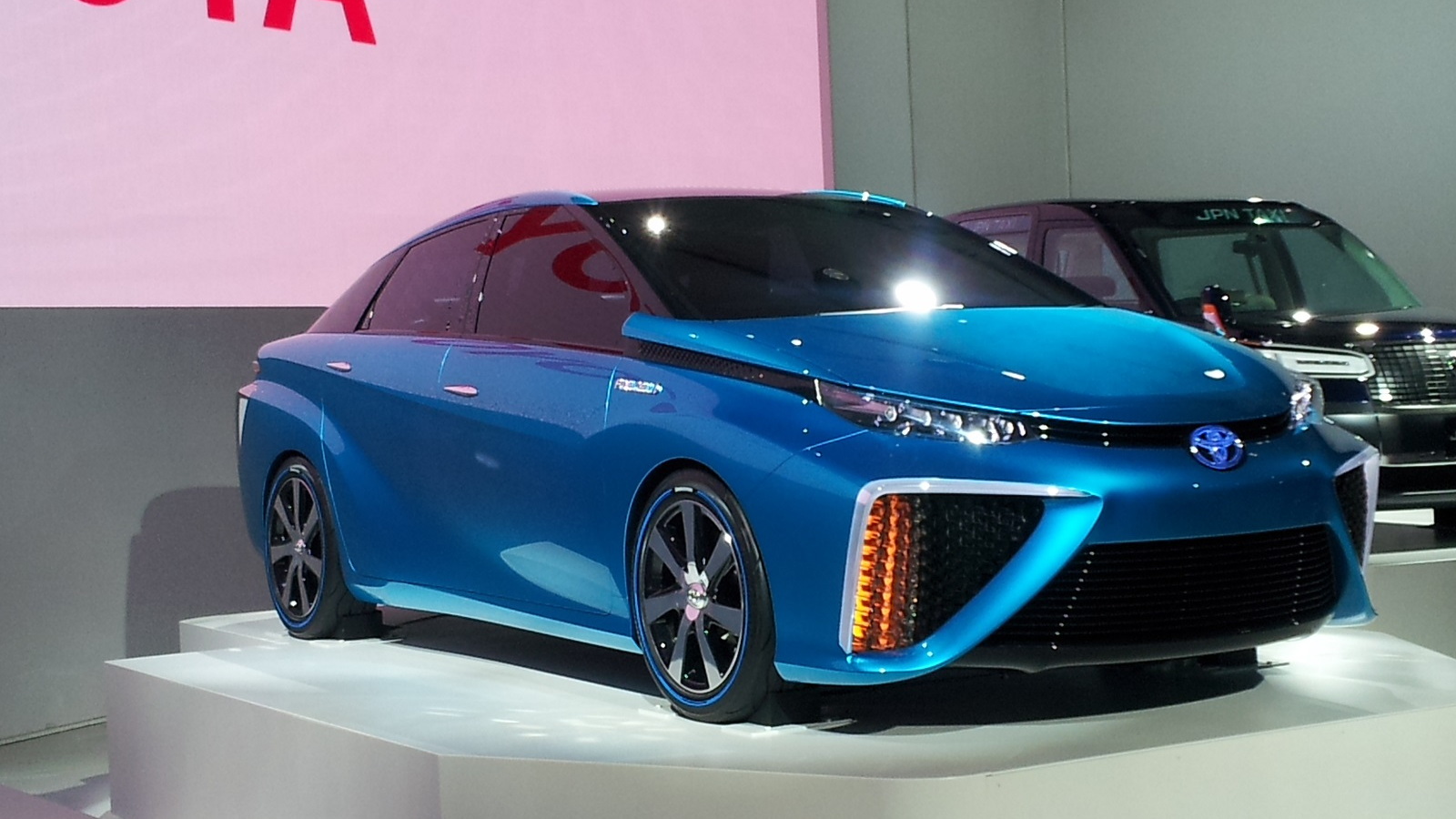 At the Tokyo Motor Show, Toyota unveiled its FCV Concept, a somewhat-disguised version of a production car it's expected to launch next year and offer for limited sale in 2015.

Meanwhile, at the Los Angeles Auto Show, the wraps came off the Honda FCEV Concept--and Hyundai announced that its Tucson Fuel Cell conversion would be offered for lease next year to a limited number of Southern California residents.

The Hyundai Tucson Fuel Cell is the closest to hitting the roads--it'll appear next spring--but the Toyota and Honda are likely to be produced in higher numbers.

And the Honda signals that Japan's third-largest carmaker fully intends to launch a volume hydrogen-powered vehicle, echoing Toyota in its disdain for the battery-electric vehicles that rival Nissan produces in higher volumes than any other maker.

The allure of a hydrogen fuel-cell car--essentially an electric car with the large battery pack replaced by a much smaller one with a hydrogen fuel cell as a range extender--is that it offers both range and refueling time comparable to that of a gasoline car.

The drawback--and it's a big one--is that hydrogen fueling infrastructure is virtually nonexistent in the U.S., with only a few dozen stations operating nationwide thus far and no opportunity for home refueling.

The largest Japanese carmaker first unveiled a design concept for a hydrogen vehicle two years ago at the 2011 Tokyo Motor Show.

That design exercise, the FCV-R Concept, has now morphed into the more aggressive FCV Concept shown last week at the latest Tokyo show. Toyota says the Camry-sized car will have a range of roughly 310 miles when its hydrogen tanks are fully filled.

With even larger grilles on the front, presumably to cool the fuel stack and the various electrical components, the FCV Concept looks like an "angry vacuum cleaner," in the words of one bemused Tokyo show attendee.

It uses Toyota's own fuel-cell stack and a pair of high-pressure hydrogen tanks across the underbody, one below the rear seat and the second just aft of the rear axle.

Because fuel cells can't quickly alter their power output in response to acceleration and braking, power delivery to the electric motor driving the front wheels s buffered through a lithium-ion battery pack under the front seats.

The fuel cell can deliver sustained power output of 100 kilowatts (134 horsepower), but Toyota did not specify either the output of the drive motor or the capacity of the battery.

The big unknown is the cost of the production FCV; while Toyota had initially hoped to bring it in at a price of $50,000, reports have circulated that put the cost to Toyota--and hence perhaps the retail price--at more than double that number.

Toyota will initially launch the FCV in four Japanese cities--Tokyo, Chukyo, Kansai and Fukuoka--during 2015. It will come to the U.S. and Europe after that.

The company thinks that the global market for fuel-cell vehicles could be in the "tens of thousands" by the 2020s. It has partnered with BMW to share development and production expenses for fuel-cell technologies.

At last week's Los Angeles Auto Show, Honda showed the FCEV Concept, a design study for a successor to the FCX Clarity fuel-cell sedan that it has produced in tiny numbers since July 2008.

With huge wheels, blade-like front and rear fenders, and entirely covered rear wheel wells, the styling of the FCEV Concept will likely be considerably refined before emerging as a production vehicle.

Honda said its next-generation fuel-cell vehicle will launch in 2015 in the U.S. and Japan, followed by Europe.

The existing FCX Clarity program reportedly was intended to produce only 200 cars from 2008 through 2014, of which Honda has so far delivered 40 in the U.S.

The upcoming car will have its powertrain packaged entirely in the engine compartment, giving more passenger compartment volume, and future model design flexibility as well. The FCX Clarity's fuel-cell stack was contained in the tunnel between its seats.

The output of Honda's fuel-cell stack is said to be "more than 100 kW," with a 60-percent increase in power density in a stack that's one-third smaller than that of the FCX Clarity.

Interestingly, according to Mike Accavitti, senior vice president of American Honda, the concept "not only sets our direction for our next generation fuel-cell vehicle in 2015, but for future improvements in electric drive technology."

That's likely a hint that Honda will share electric-drive components among the 2015 fuel-cell car and various of its hybrid and plug-in hybrid vehicles, likely including the SH-AWD three-motor hybrid system used in a model of its large Acura RLX sedan and the upcoming Acura NSX mid-engine sports car.

While Toyota prepares to roll out its 2015 car and Honda refines its design, Hyundai has "elbowed past them" (in the words of trade journal Automotive News) with a hydrogen vehicle that it will lease starting early next year.

For $499 per month and a $3,000 down payment, drivers in Southern California can lease the 2015 Hyundai Tucson Fuel Cell for three years with unlimited mileage--and Hyundai will provide all fuel, maintenance, and roadside assistance free under its Hyundai Assurance program.

In a presentation, Hyundai contrasted a battery-electric vehicle (which it said had a range of 90 miles or less, and a recharge time of 3 hours or more using 240-Volt charging) to a fuel-cell vehicle with a range up to 300 miles and a refueling time of less than 10 minutes.

MORE: Which Carmakers Are Still Serious About Hydrogen Fuel-Cell Vehicles?

The company has put more than 2 million miles on its internally-developed hydrogen fuel-cell vehicles since testing began in 2000, it said, with 140,000 miles on its latest generation of fuel-cell stack.

Next October, Hyundai Motor America's Chino, California, technical center will open a hydrogen fueling station, using renewable energy to create the hydrogen, that will be open to the public. Over several years, the state of California hopes to open as many as 100 hydrogen stations.

It's a "sporty and quiet drive experience," said Hyundai America CEO John Krafcik, who said the company has seen "strong response" since the lease offer was announced last week.

The EPA hasn't yet rated the Tucson Fuel Cell for range, but Hyundai expects the final rating to come in between 250 and 300 miles using a tank that holds 5.64 kg of hydrogen.

For all the news on the concepts, production cars, and other events at the show, check our Tokyo Motor Show index page.

And while you're at it, check out our stories from the Los Angeles Auto Show as well--it's happening the same week as Tokyo, and we've got reporters there too.