Could the 2015 BMW i8 sports coupe, coming this summer, do for plug-in hybrids what the Tesla Model S did for battery-electric vehicles?

That is, could the sleek, sexy, attention-luring coupe with doors that open like insect wings make plug-in hybrids...sexy? 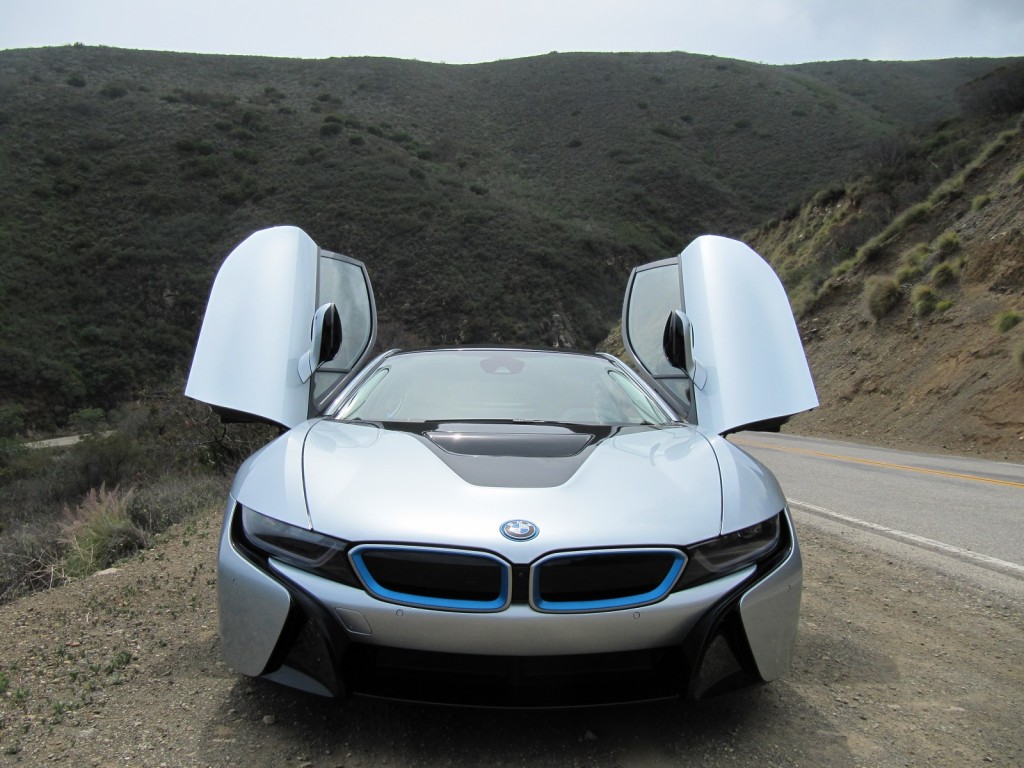 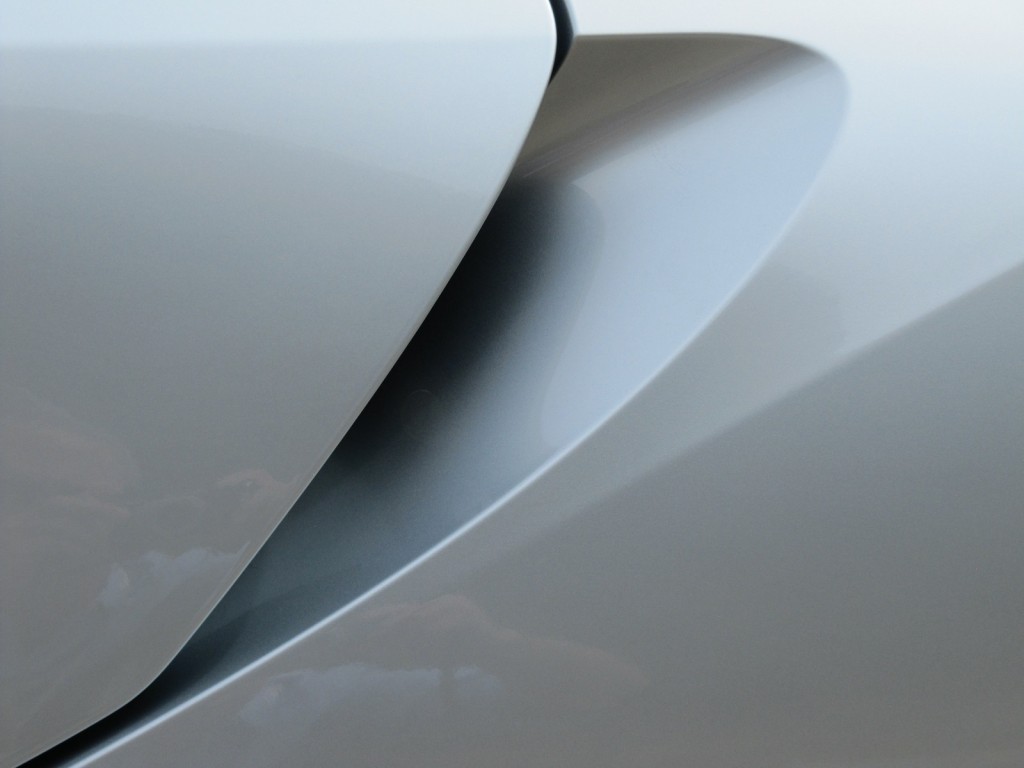 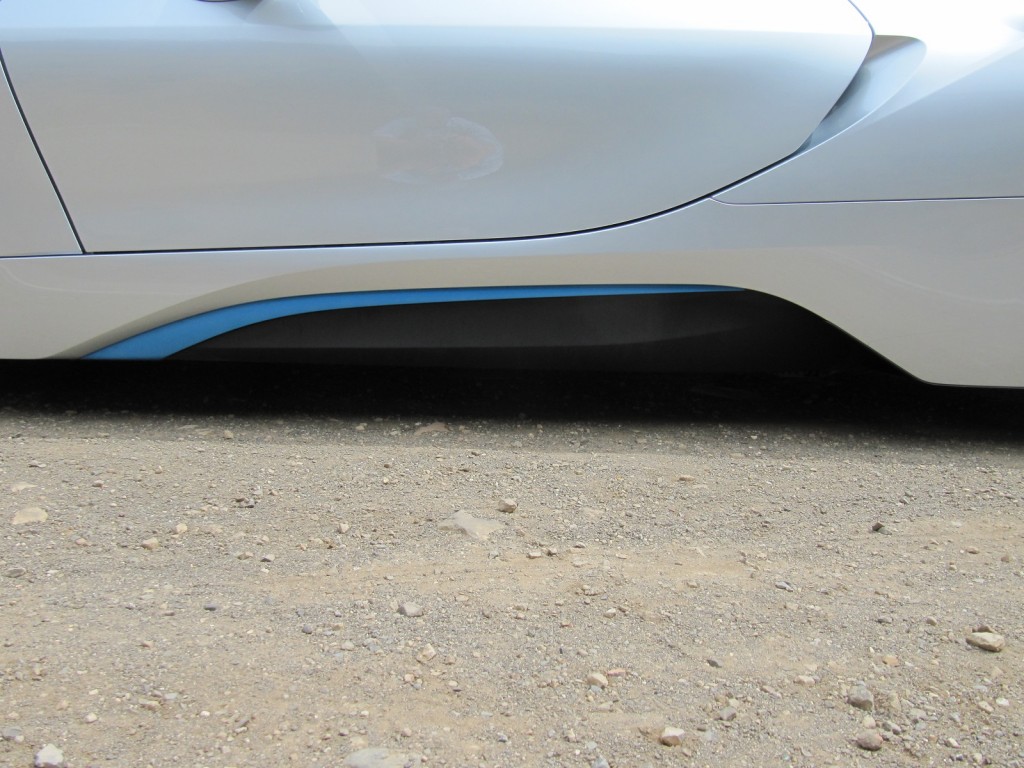 Certainly BMW's new i8 drew crowds wherever we went during a day-long test drive in and around Los Angeles last week.

And that's a far cry from the anemic plug-in Toyota Prius, or the all-but-invisible plug-in hybrid versions of the familiar Ford Fusion and Honda Accord family sedans.

On the other end of the scale, at a price starting at $135,800, the 2015 BMW i8 is far more affordable than the limited-production Porsche 918 Spyder plug-in hybrid supercar, which comes in somewhere around a million bucks.

One of the things we liked best about the BMW i8, frankly, was its split personality--which more than one driver called its "Jekyll and Hyde" sides.

The i8 coupe is what's called a "through-the-road hybrid," meaning it has two separate powertrains, each of which can be used on its own--or both can be synchronized to deliver all-wheel drive and maximum power.

The front wheels are driven by a large 96-kilowatt (131-hp) electric motor, powered by a 7.1-kilowatt-hour lithium-ion battery pack fitted in the tunnel between the two front seats.

The split personality comes in its three driving modes. 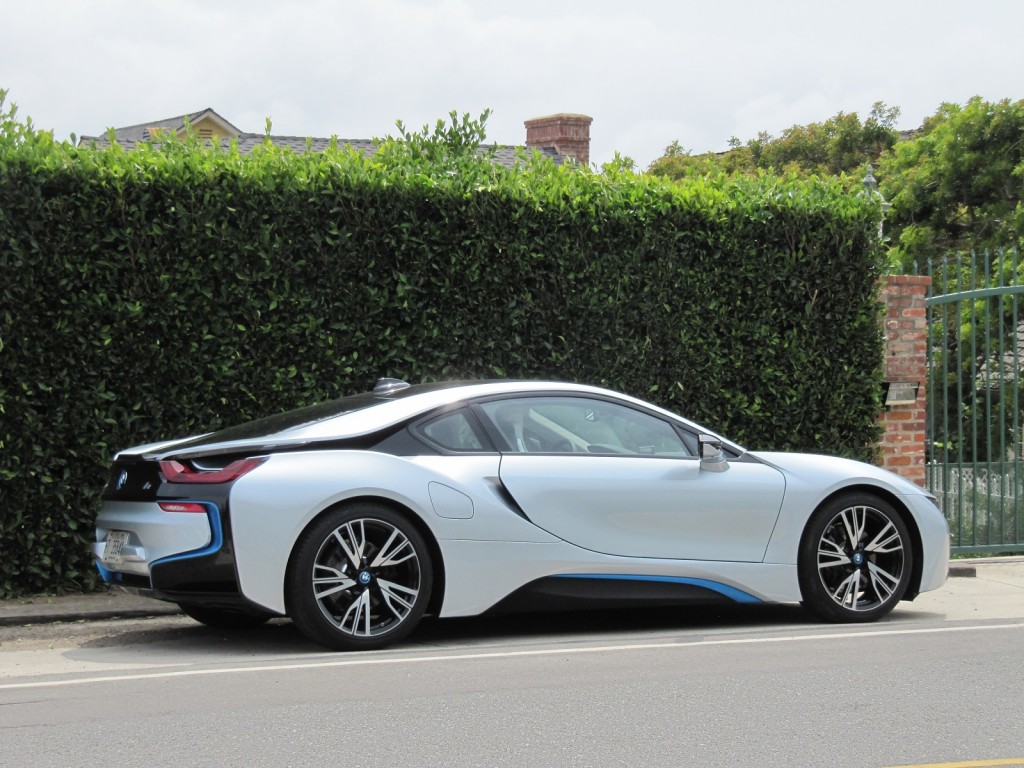 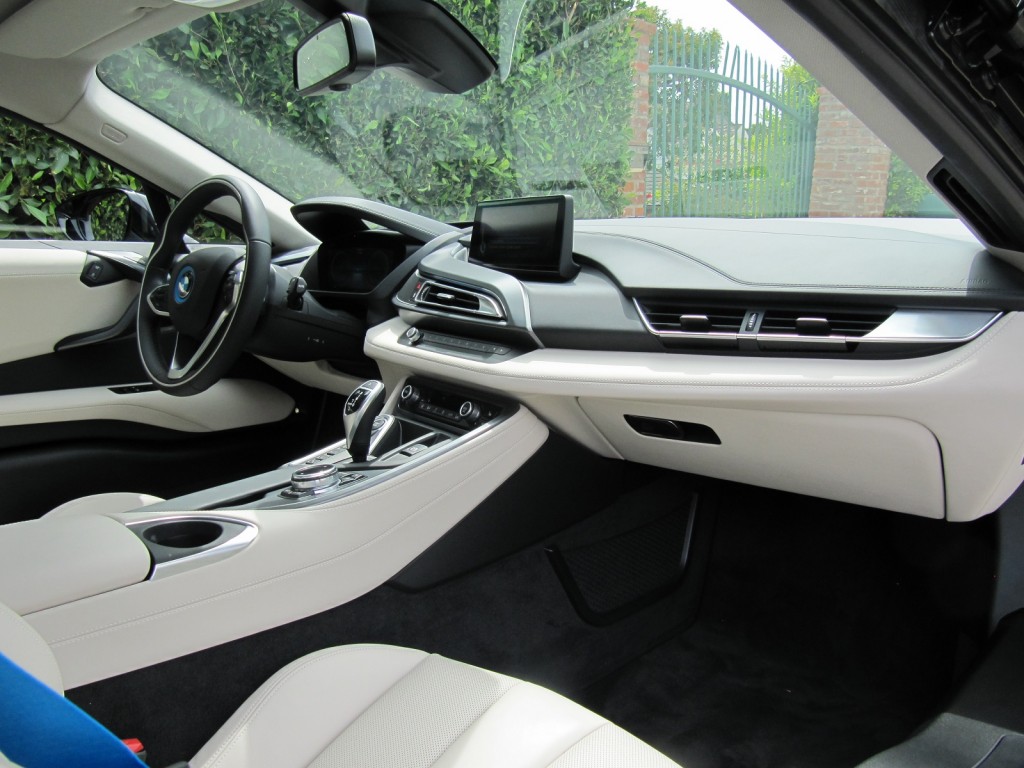 Running the i8 in its all-electric "Max e-Mode," it's a front-wheel-drive car with a top speed around 75 mph and range of somewhere between 12 and 20 miles. It's a gasoline hybrid when powered by the rear wheels in "Normal" mode, complete with start-stop for the engine at stoplights.

But pulling the shift lever to the left calls up "Sport" mode, in which reprofiled engine-control software produces faster response, keeps the car in lower gears longer, and calls on the front wheels for electric "Boost" when maximum power is needed.

Sport mode also uses engine overrun and regenerative braking to charge the battery pack to its maximum capacity to get it ready for maximum power delivery--unlike Normal mode, which keeps the pack at its set, discharged level to operate as a hybrid.

The whole affair is controlled by a great deal of software that keeps all the pieces operating harmoniously, maximizes efficiency, and still offers power on demand. In Sport mode, maximum output from both powertrains is 362 hp, and BMW quotes a 0-to-62-mph time of just 4.4 seconds.

As a pure electric car, the i8 is pleasant enough over a limited range. While the EPA hasn't released range or efficiency ratings yet, we're guessing it'll be rated at 12 to 16 miles of range. BMW says "up to 30 kilometers," or 19 miles, but that's based on optimistic European test-cycle range results.

In electric "Max e-Mode," which is switched on using a button on the console, the i8 accelerates certainly well enough to keep up with traffic.

There's a firm detent at the bottom of the accelerator travel, though mashing the pedal to the floor pushes through that limit and calls up every power source available to the car.

That means the BMW i8 will switch on the rear-mounted turbo engine as well, even if the driver specified all-electric driving; BMW says this is for emergency situations.

The electric drive is smooth and quiet, with a small amount of whine from the electrics. But it's an appropriate level of noise for a sports coupe, and around town, the i8 shares its calmness with other all-electric cars. 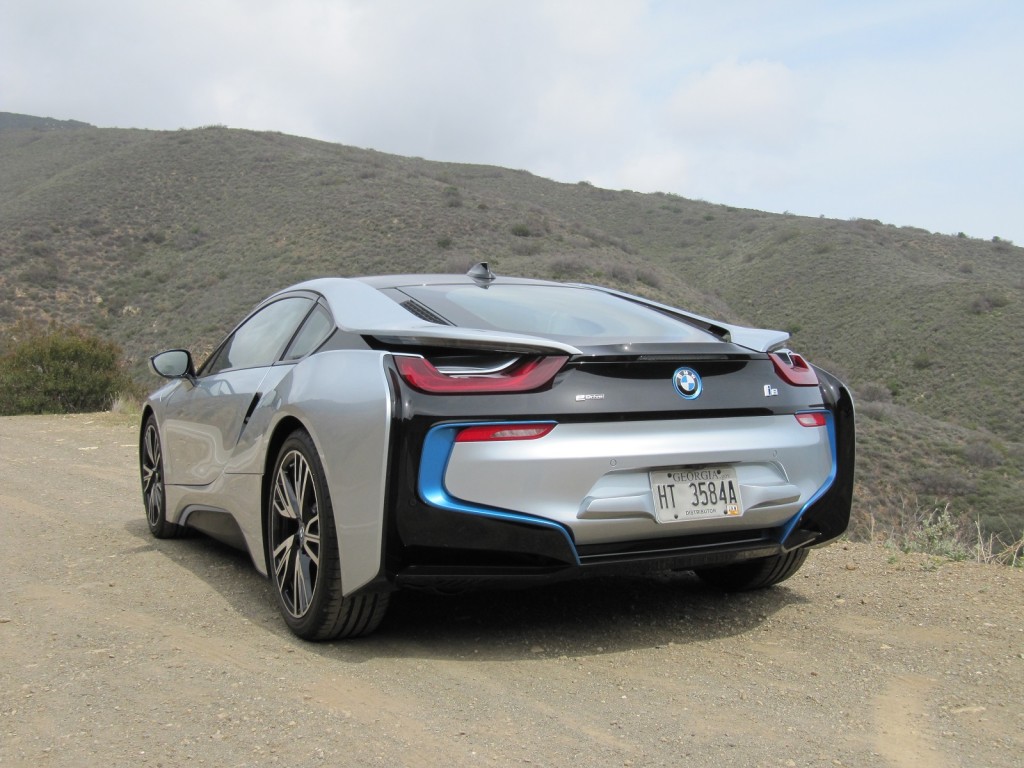 After hanging at 1 mile and then 0 miles of electric range for what seemed like a long time--longer than a mile--the i8 reverts to being a hybrid when its battery depletes to about 25 percent of capacity.

The turbocharged three-cylinder engine switches on, and it runs as a gasoline hybrid car would. It starts out from rest under electric power, and then switches on the engine as the speed goes above 20 mph or so.

We noticed that under strong acceleration, the electric motor was limited in power. While continuing to accelerate switched on the engine behind us, the power took more than a second to kick in after that--presumably the time needed not to switch it on but to spool up the turbo to get significant power delivery.

That meant that the sequence under fast acceleration from a stoplight started with full electric acceleration, followed by a slowing rate of speed increase as the engine switched on, then a burst of acceleration propelled by the rear wheels after a second or two.

We learned to drive around that, but it wasn't as smooth as we'd have liked--and it indicates the huge challenges of getting disparate powertrains to work together smoothly.

Inside, while the 2015 BMW i8 is dubbed a 2+2 coupe, there's no legroom to speak of in the rear seats with adults up front. Each rear seat holds one good-sized backpack, and that's about it.

The dashboard and console will be recognizable to BMW drivers as a product of the Bavarian company. While the i8 shares the freestanding central screen of the BMW i3 electric car, there's a more conventional electronic instrument display cluster behind the steering wheel.

The graphics on the screen, manipulated by the iDrive controller on the console, are also just like those in the rest of the BMW family--with several additional layers of functions for the new powertrain.

The interior of the cars we drove was a very pleasant ivory and black two-tone, with blue accent lines that turned out to light up via LEDs inside when the car passed through tunnels or other dark areas.

The blue accents in general set the i8 apart from other sport coupes, coming in just under the bar for "too busy" (in our eyes) and differentiating it from fastback two-doors that share its overall shape.

One of our favorite features was the bright blue color of the seat belts, giving a pleasant twist to the normally invisible black belt webbing--and a definite luxury feel of "surprise and delight."

Perhaps the most surprising aspect of the design is the tapered rear bodywork. Long, narrow "wings" on the sides of the glass rear hatch all but cover a deep grooved tunnel on the tops of the rear fenders, further hidden by a little outboard kickup in each taillight. 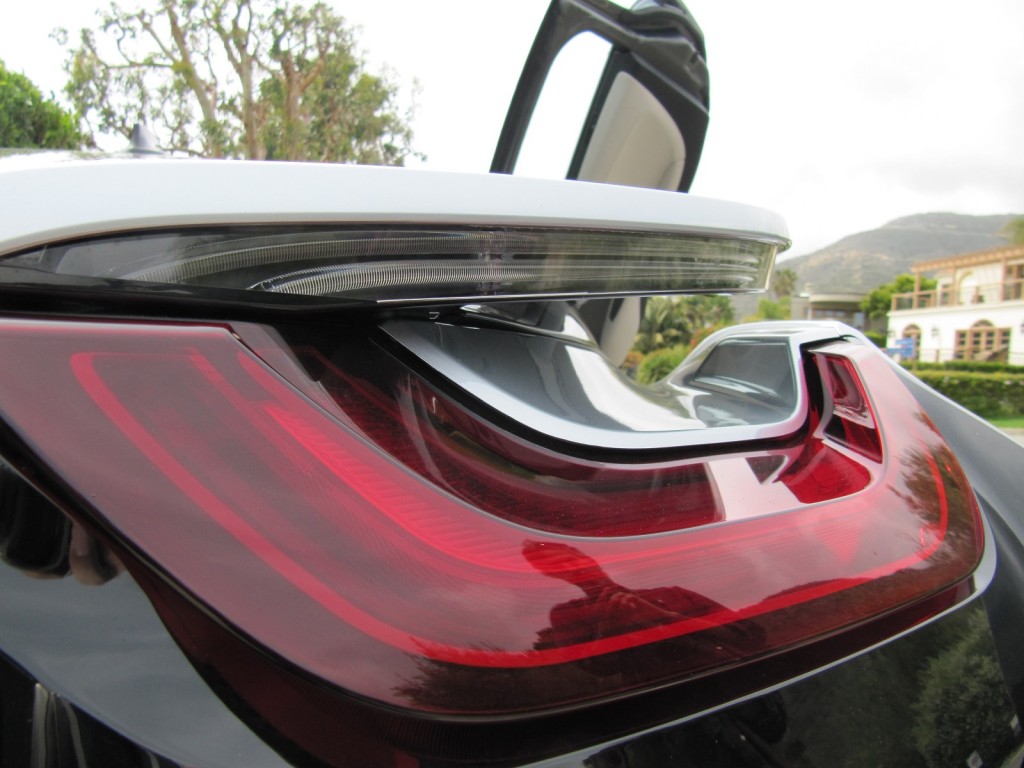 It's subtle, but it's also startling once you look at it--no other car we know of has anything similar, and it's a quiet way of underscoring the BMW i8's difference from other coupes.

The challenge that poses, of course, is what to compare to the 2015 i8.

What competes with i8?

BMW executives uniformly describe their plug-in hybrid two-door as a "new category of sports coupe" with "high efficiency" and "environmentally responsible design," though we remain thoroughly unconvinced that such a segment actually exists--at least in the U.S. market.

Press them further, and they'll suggest the Audi R8 and Porsche 911 as the nearest competitors. Both are effectively two-seat performance coupes with prices above $100,000 for the bulk of the model range.

Is the Tesla Model S a competitor? Certainly BMW and Tesla owners likely share some psychographic similarities--just look at the number of BMWs of all models on the roads of Silicon Valley--but the Model S is a five-seat family sedan, and all-electric as well.

Pretty much everyone at the drive event quickly dismissed the Cadillac ELR as a competitor. It too is a striking plug-in coupe, but its performance isn't up to the level of the BMW's, and it remains a Cadillac at a time when that brand has not yet emerged as a straight-across competitor to German luxury brands. 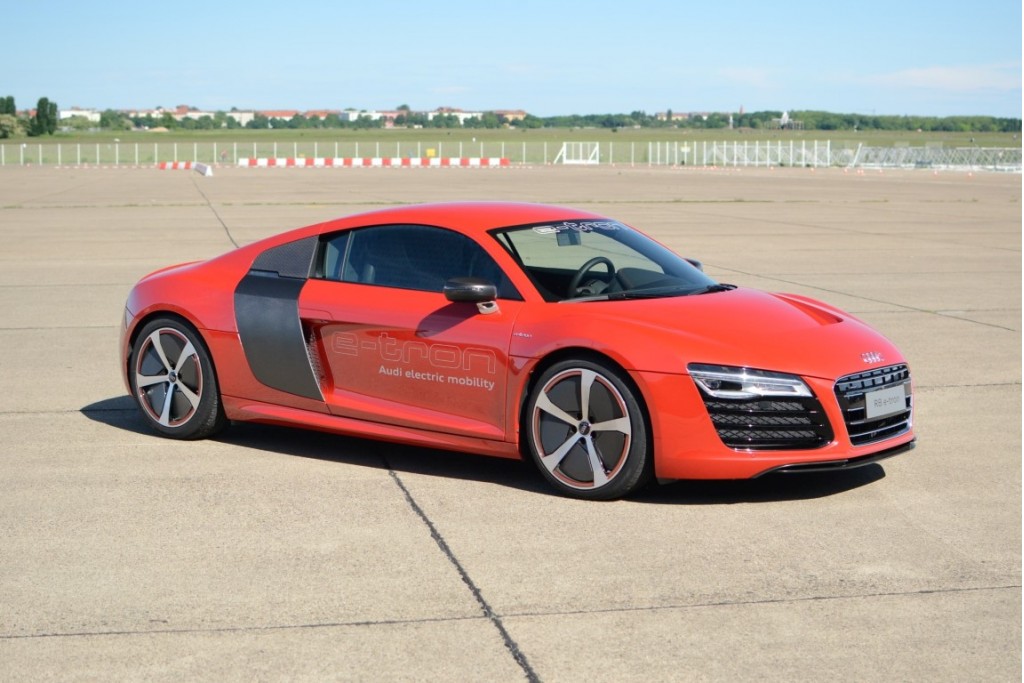 The overall conclusion is that at its likely low volumes (5,000 globally during its first year), the 2015 BMW i8 is likely to sell purely on its looks and its status as BMW's current halo car.

It's an excellent first effort as a plug-in hybrid, and paired with the BMW i3 battery-electric hatchback--both designed on aluminum chassis structures holding the running gear, with carbon-fiber reinforced plastic body shells--it indicates just how serious BMW is about staking a claim in the fast-growing plug-in car field.

We suspect many buyers would prefer the i8 to have twice its likely range, taking it above 30 miles and making it possible to run a much higher percentage of its miles on grid power.

But that may ignore its purpose, which is to show that a sports coupe can use a combination of battery electric power and a combustion engine to run much more efficiently on average--and still look good and perform well.

Not to mention impressing bystanders ....