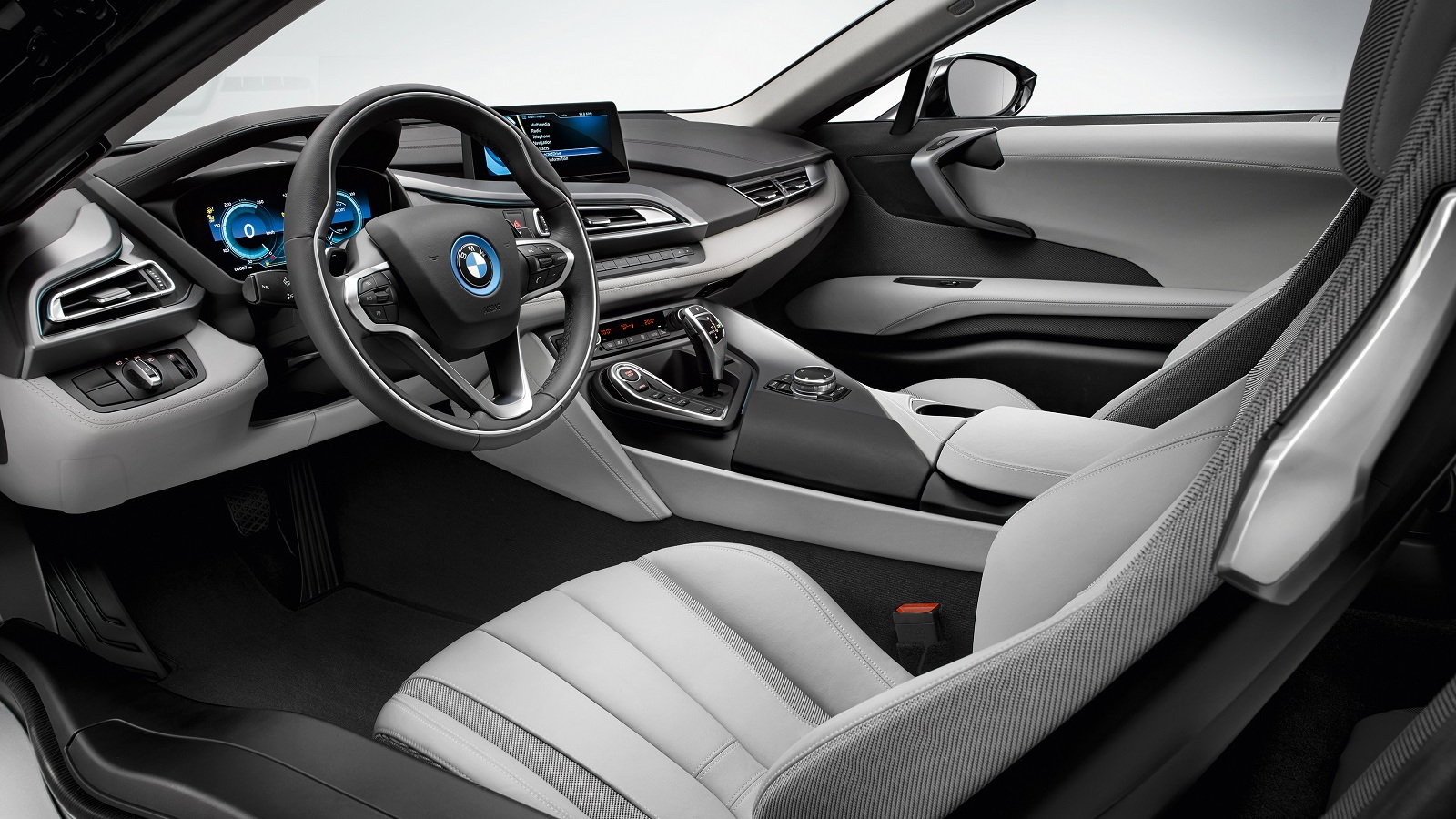 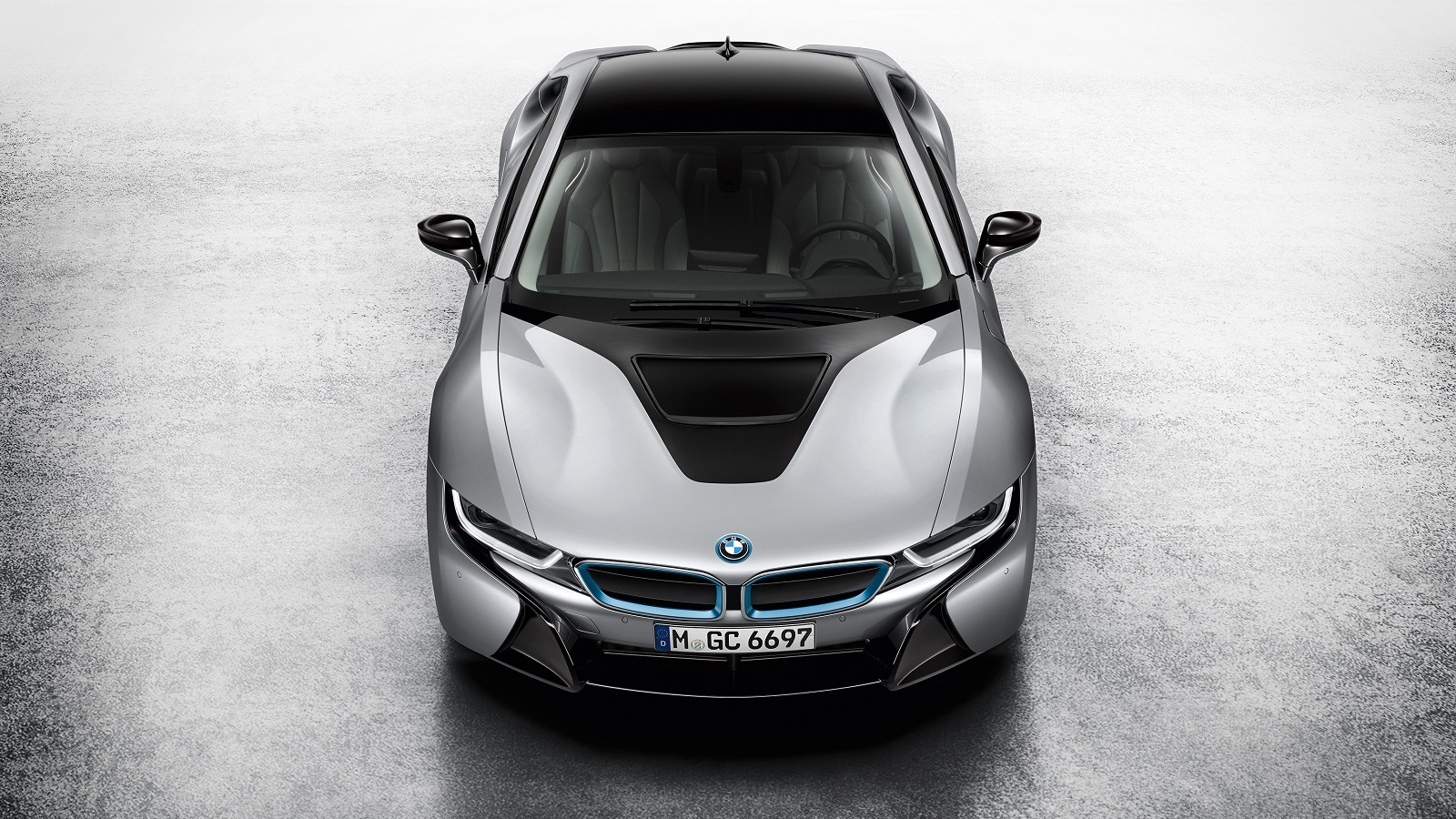 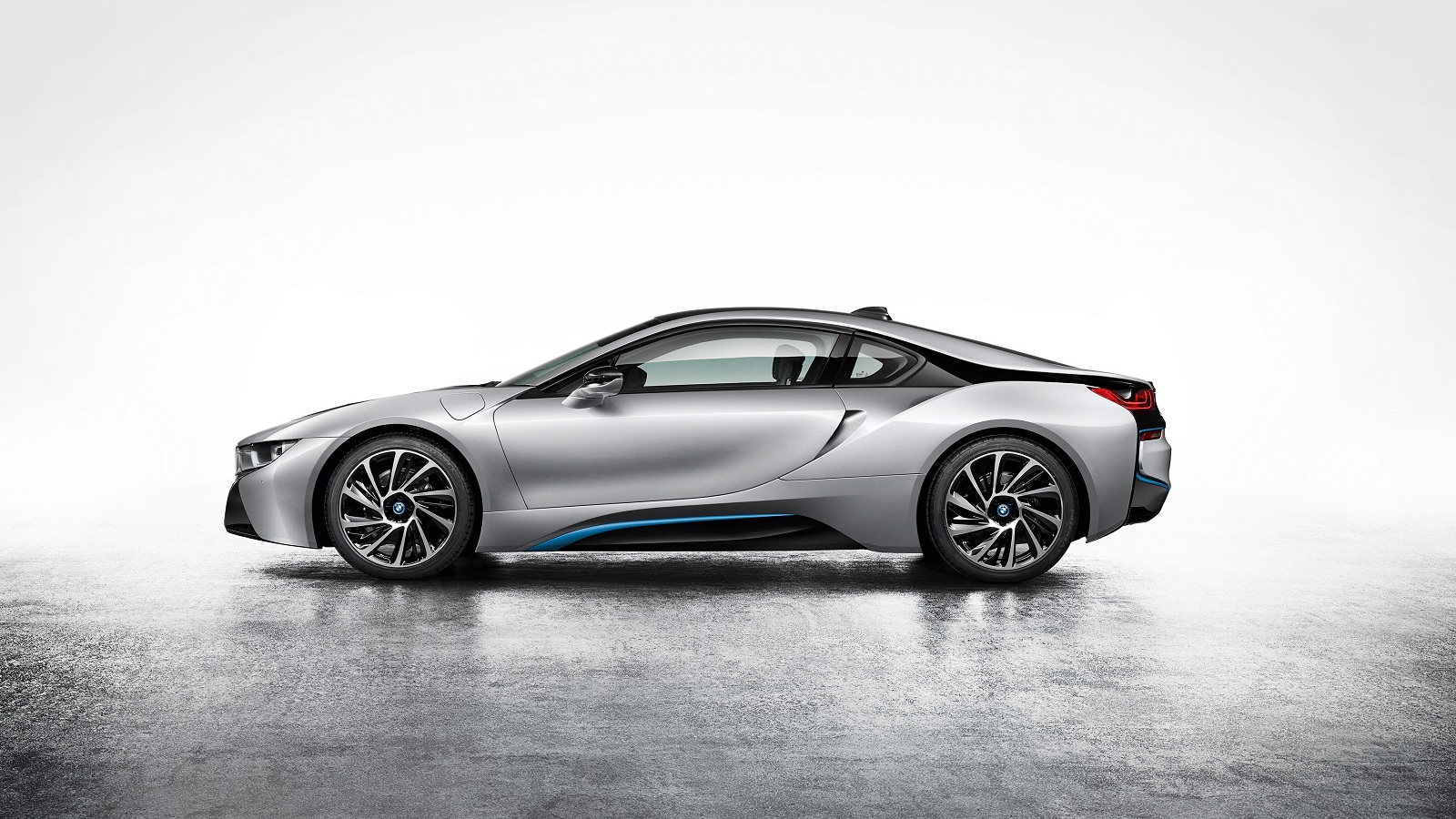 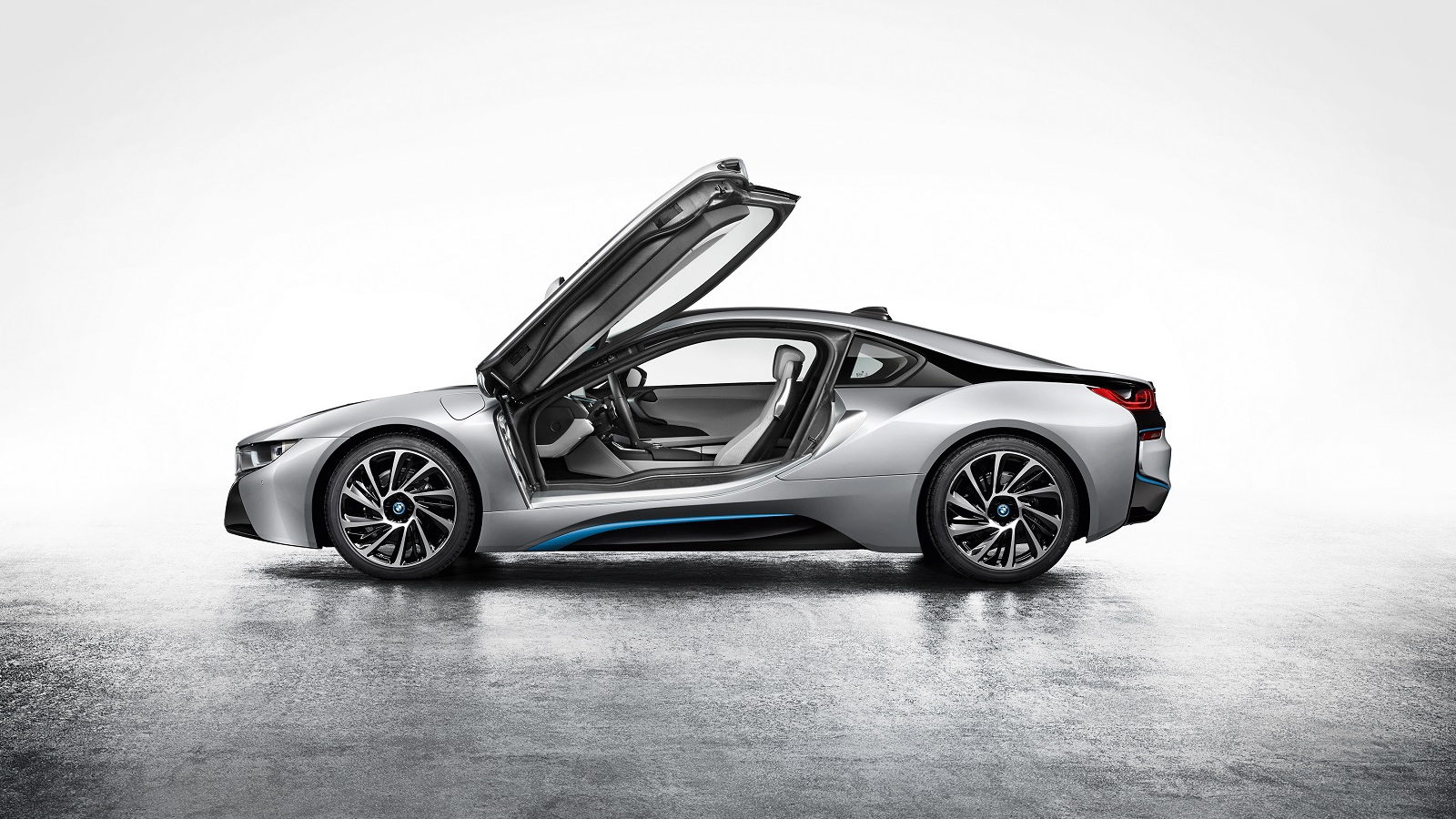 At this morning's Frankfurt Auto Show, the wraps finally came off the production version of the 2015 BMW i8, the plug-in hybrid coupe that's the high-performance counterpart to the 2014 BMW i3 electric urban car.

Among other details, BMW announced U.S. pricing for the car, which will go on sale next spring.

The BMW i8 will start at $135,925 including destination--or roughly three times the cost of the smaller i3 battery-electric car.

Both cars have strong but light bodies made of carbon-fiber reinforced plastic (CFRP) riding on an aluminum rolling platform that holds the running gear, including battery packs, electric motors, and in the case of the i8, a rear-mounted 1.5-liter turbocharged three-cylinder engine.

But the 2015 BMW i8 is the company's first-ever plug-in hybrid. The company's press release calls it a "revolutionary interpretation" of BMW's tradition of driving pleasure, and for once, the word "revolutionary" may not be hyperbole.

The car's statistics are impressive: curb weight of just 3,285 pounds, a drag coefficient of 0.26, and a center of gravity less than 18 inches above the ground. 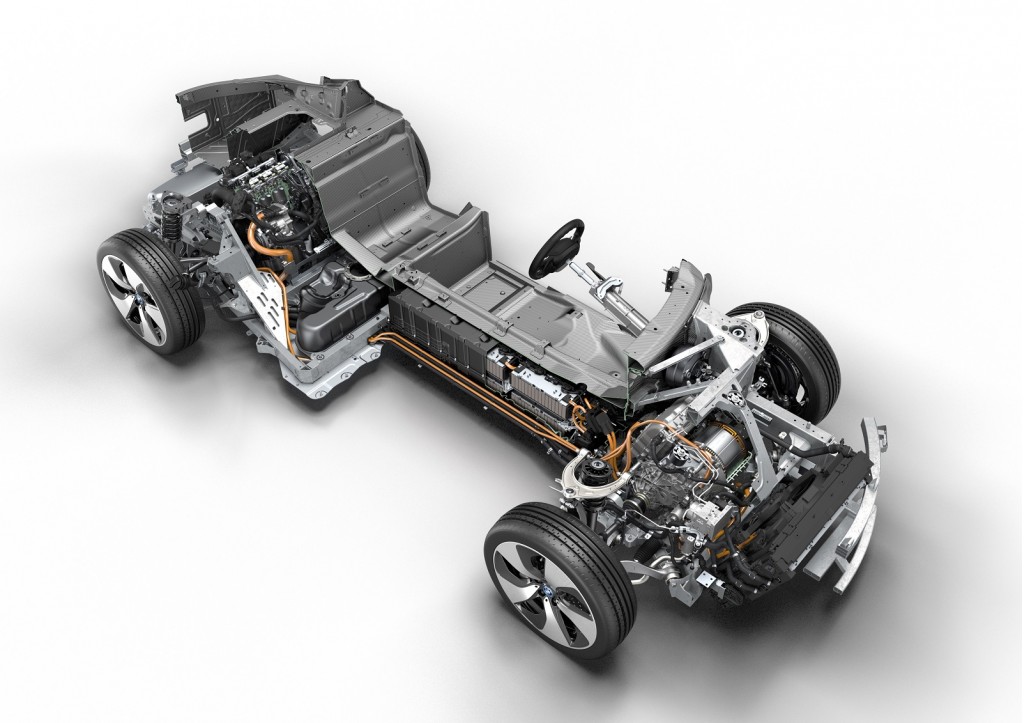 The powertrain is designed for performance; the turbocharged three-cylinder engine puts out 231 horsepower and 236 lb-ft of torque, driving the rear wheels through a six-speed automatic gearbox.

Then there's a separate electric motor that powers the front wheels, rated at 96 kilowatts (131 hp) and 184 lb-ft of torque.

The BMW i8 can run up to 22 miles on electric power alone, at a top speed limited to 75 mph. Or the engine can power the rear wheels, or both front and rear wheels can be driven together for maximum performance--with the car's vehicle control software modulating power between the two different sources.

Performance with all wheels driven is simply the sum of the two maximums: power output of 362 hp and torque of 420 lb-ft.

The lithium-ion battery pack is mounted not in the floorpan, as in the i3 hatchback, but in the tunnel between the car's two seats. BMW rates its usable capacity at 5 kilowatt-hours, and notes that the pack is liquid-cooled to minimize the effect of temperature extremes on its performance.

While BMW notes that the i8 is rated at a combined fuel consumption of 2.5 liters per 100 km gallon on the EU test cycle (or 94 miles per gallon), we'll wait to see how the EPA rates the car's range and efficiency in electric mode, and its gas mileage when running on the engine.

BMW notes that the combination of a "Driving Experience Control" switch and an eDrive button provides five different ways to travel.

Of three modes, All-Electric uses only the battery and electric motor,  Comfort balances handling and efficiency, for more than 310 miles of range, and Sport is the high-performance setting, in which the electric motor provides boost for additional speed. 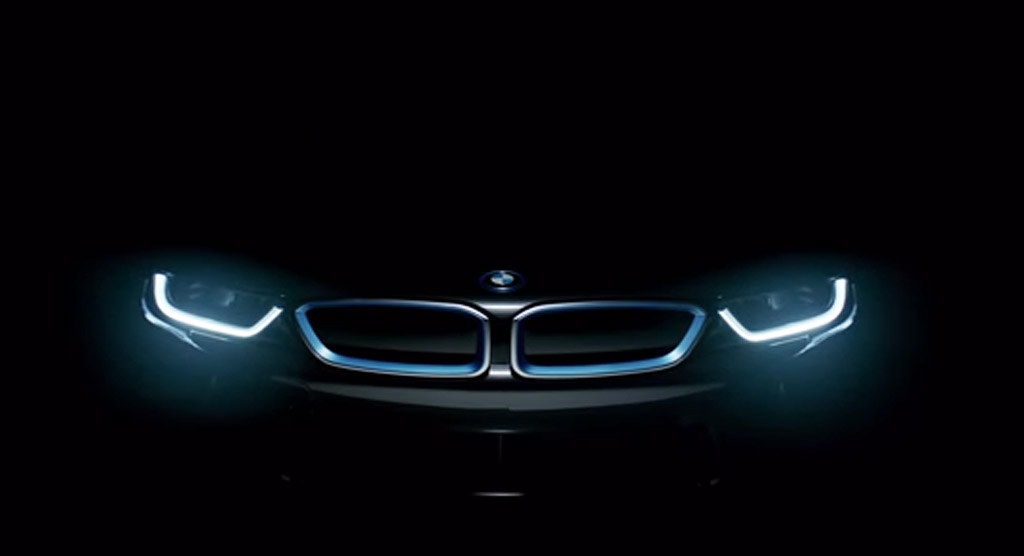 As in the BMW ActiveE prototype, there's also an EcoPro setting that can be used in All-Electric and Comfort modes to give more efficient travel at the expense of some acceleration.

The basic body shape has been seen in numerous spy photos by now, and the production model forgoes some of the flourishes seen on early concept versions, including lower door panels made of glass.

The doors still open upward like wings, however, a touch guaranteed to draw attention, and the cars use a new and "fresh interpretation of BMW design" that will likely be carried over into future plug-in models in the BMW i sub-brand.

The production BMW i8 has standard full LED headlights, and where they are legally permitted, laser headlights--a world first.

Wheels that are fully 20 inches in diameter are also standard, among the largest of any two-seat car on the market.

BMW says the 2015 i8 represents "a new era of sustainable performance."

Whether the car performs as well as other two-seat coupes in its sector--or whether the BMW i3 and BMW i8 may be too radical for the carmaker's traditional buyers--remains to be seen.