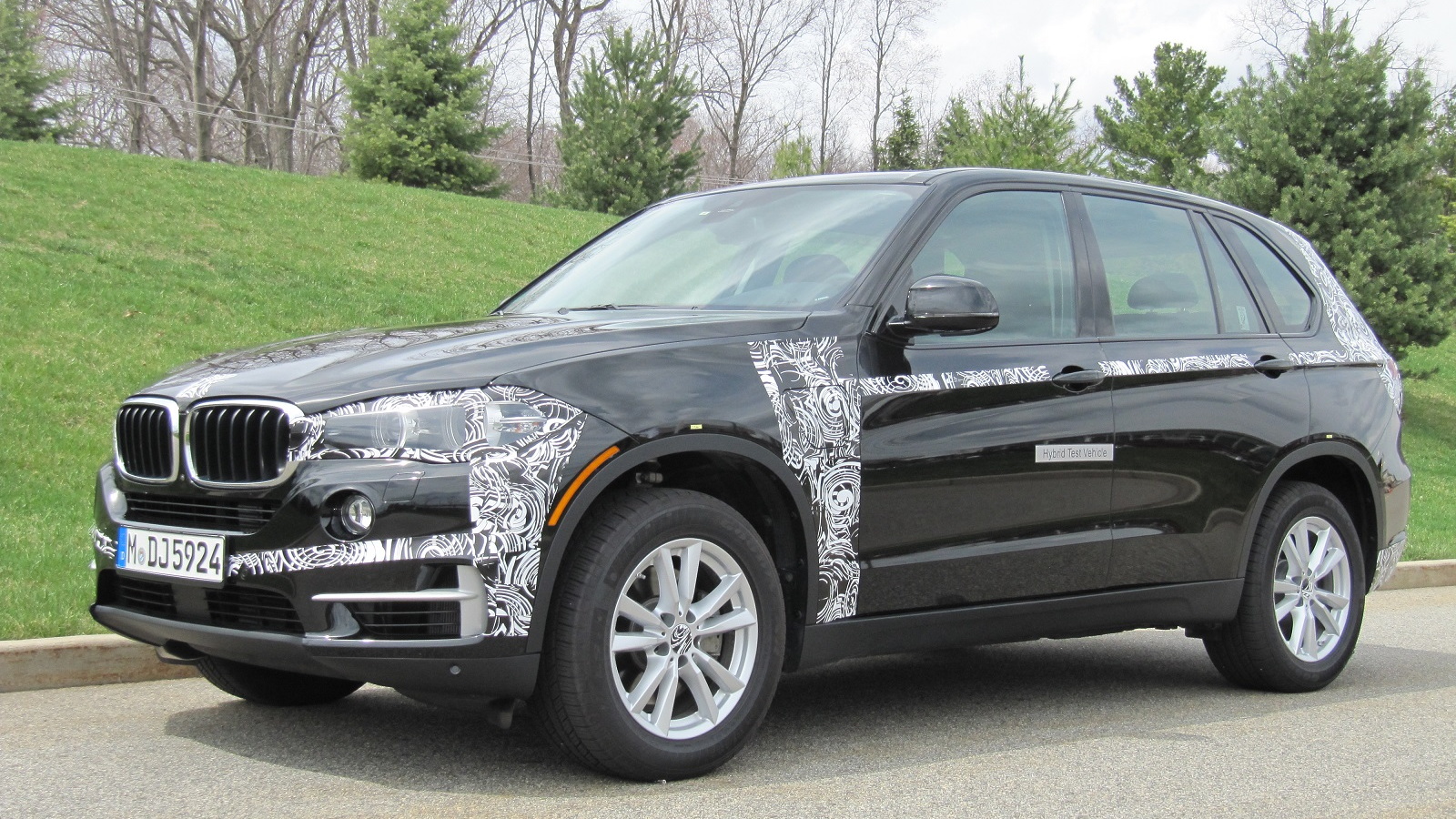 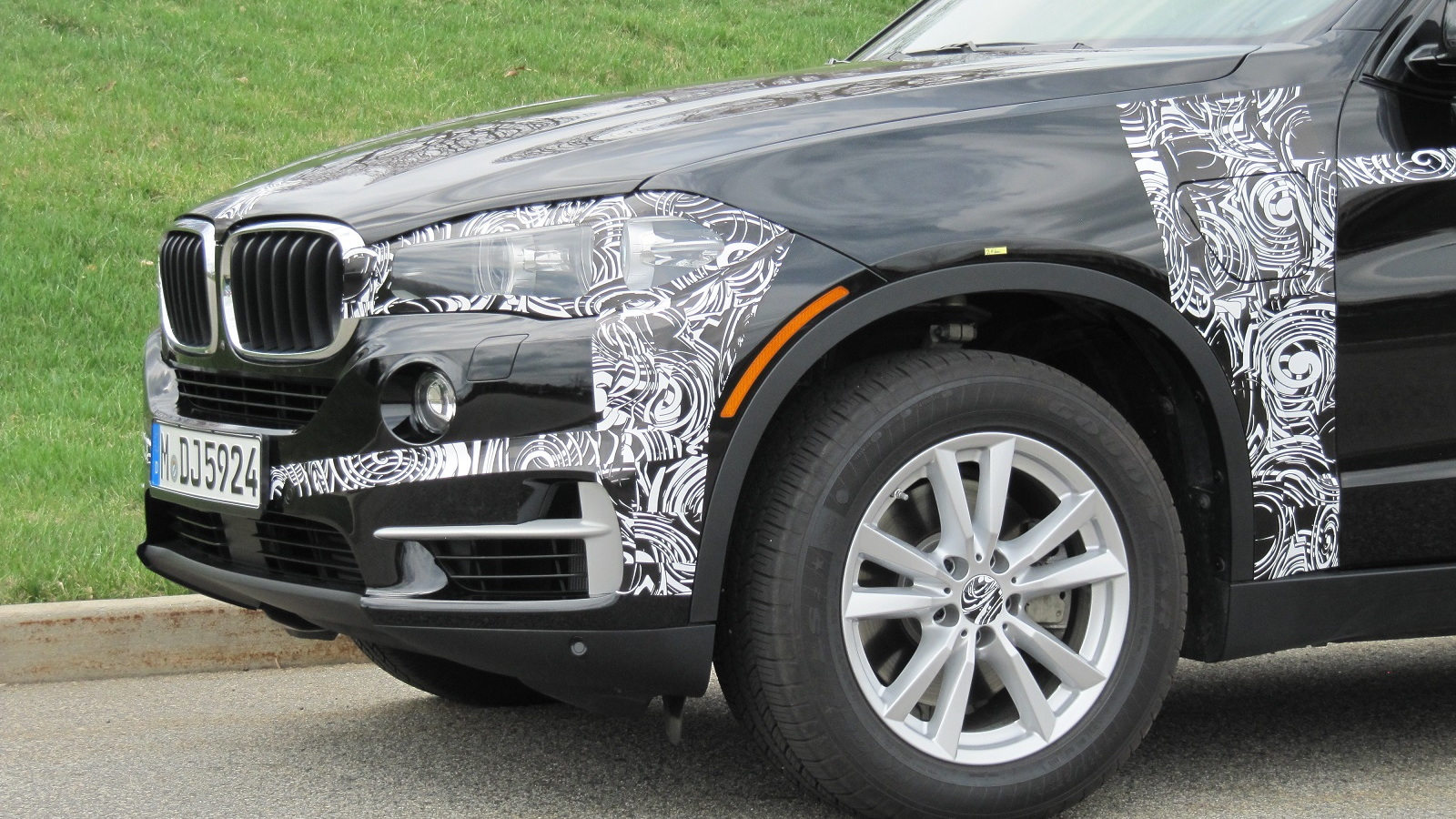 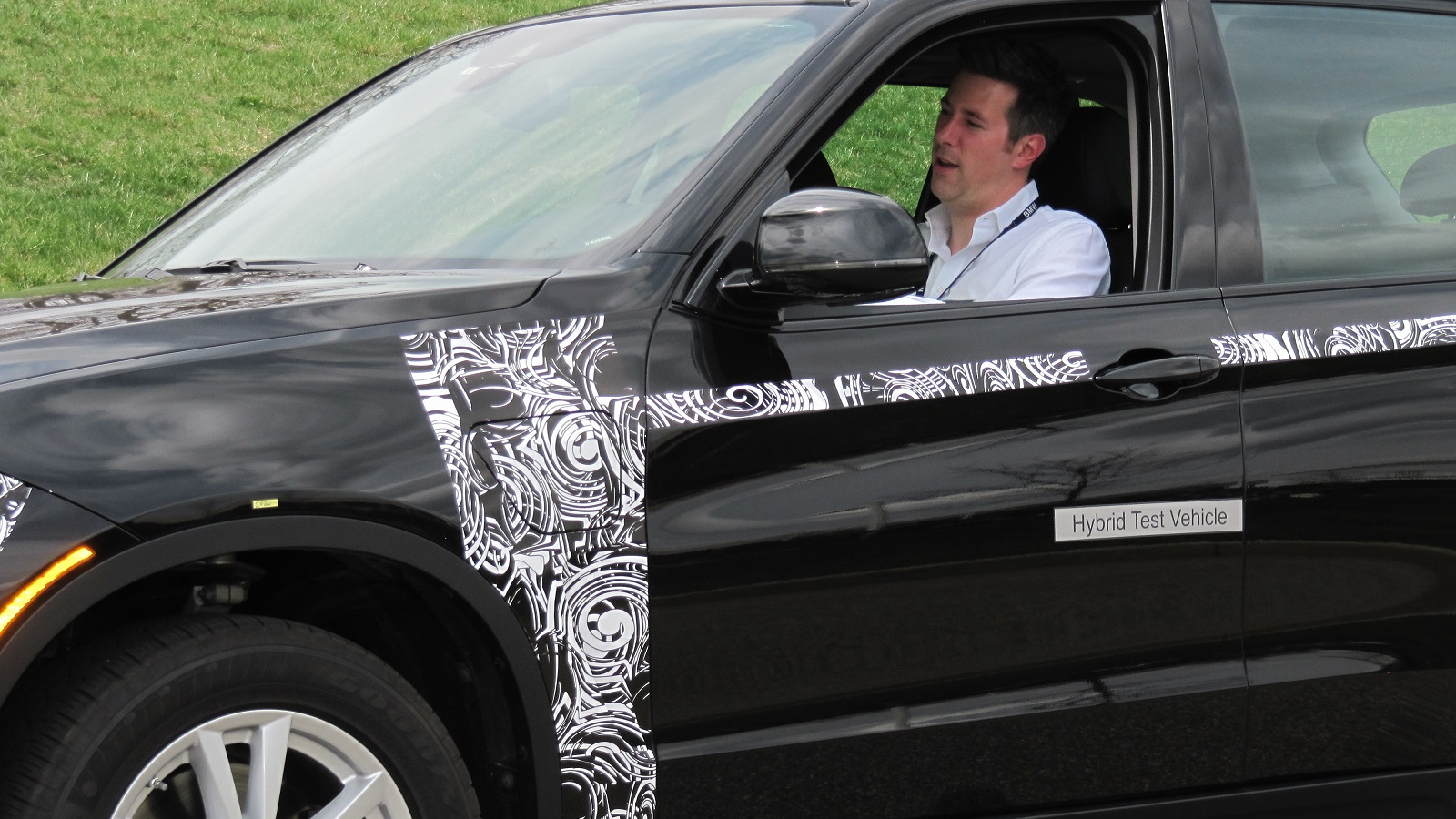 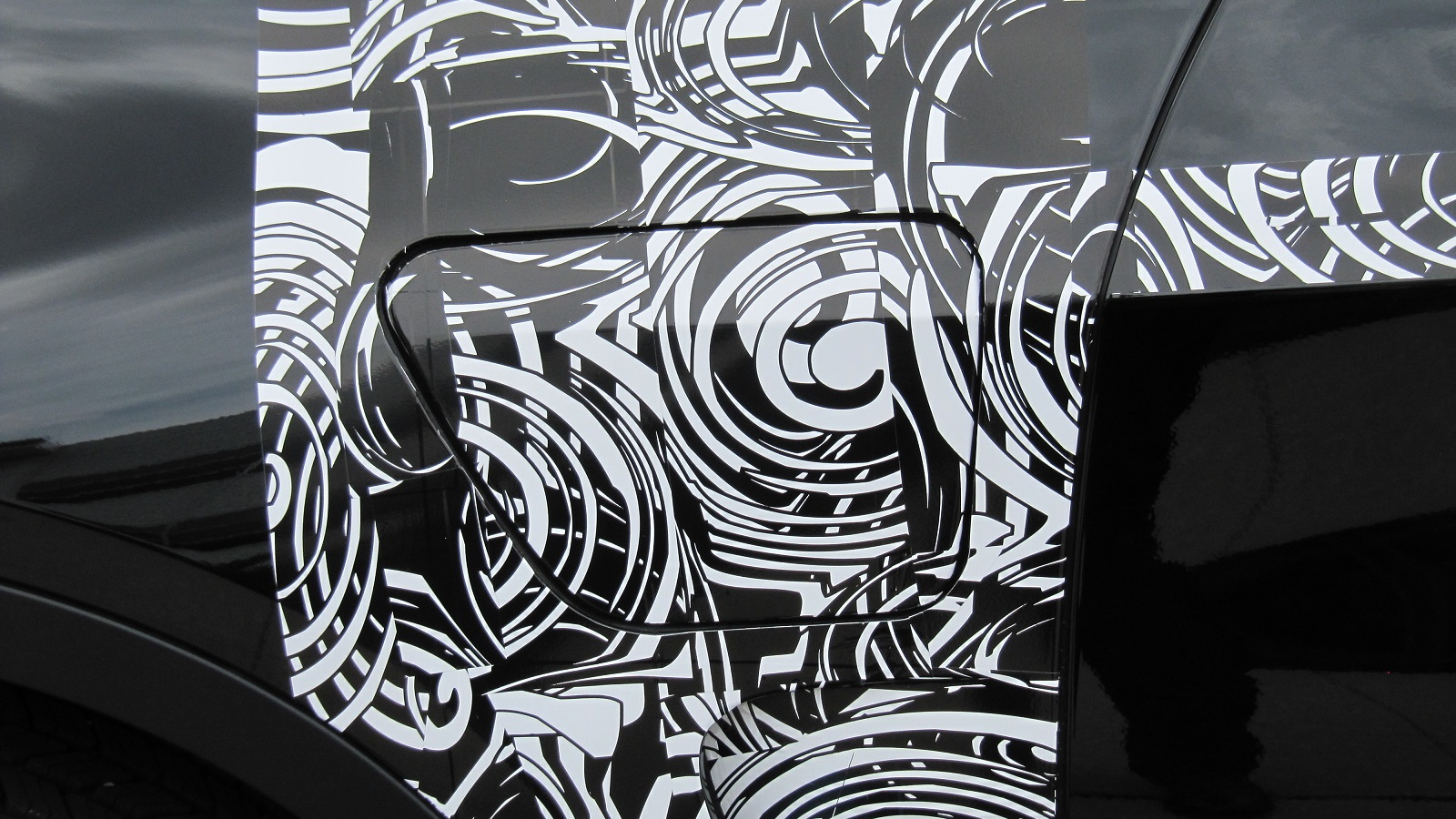 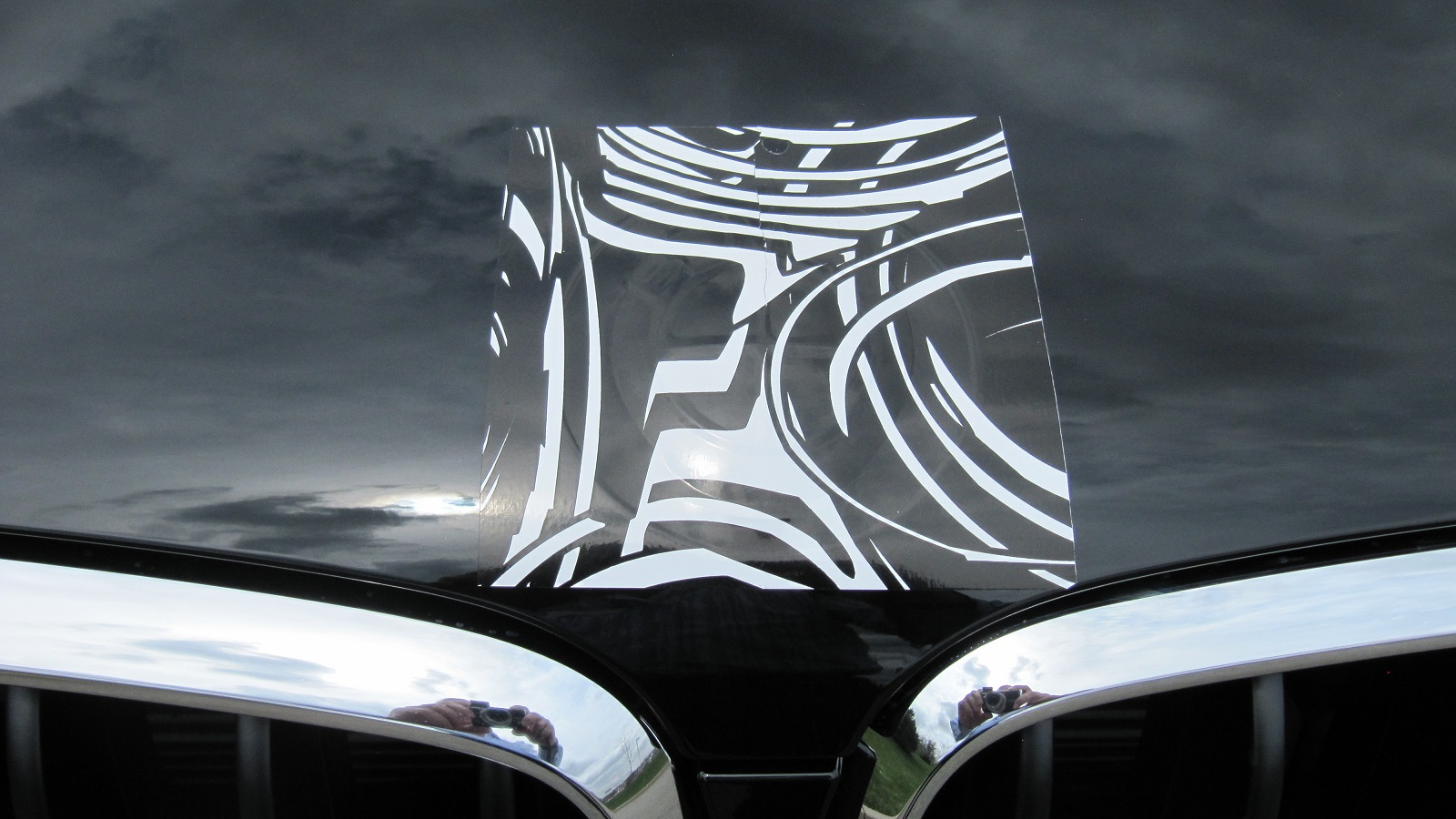 They're not here yet, but in less than two years, U.S. buyers will have a choice of at least three plug-in hybrid SUV models to choose from.

Now, we've driven a prototype version of one of them: the BMW X5 e-Drive, which will be shown as an updated concept car at this week's New York Auto Show.

It won't arrive on the U.S. market for more than a year, but BMW is sufficiently confident in its state of development that it let a handful of journalists drive a development prototype yesterday.

Assuming the plug-in hybrid X5 arrives sometime late in 2015 or during 2016, it will face off against at least two similar vehicles: the all-new Volvo XC90 Plug-In Hybrid, and the Mitsubishi Outlander Plug-In Hybrid already in production, which is selling well in Japan and some European countries.

Our drive consisted of a dozen or so loops around the sprawling grounds of BMW's U.S. headquarters in Woodcliff Lake, New Jersey.

The test car itself was a modified third-generation BMW X5, known to BMW afficionados as the "F15" after its project number.

It had been built in South Carolina, as are all X5s, shipped to Germany for modification into a plug-in hybrid, and then shipped back to the U.S. for testing.

It would have been a completely standard-looking 2014 BMW X5 if not for several patches of camouflage covering various aspects of the vehicle.

Most notable was the charge-port door on the left-front fender, which we were only allowed to photograph in its closed position because the insides were a mockup rather than a final, BMW-quality production item.

It contained a standard J-1772 socket (connected to a 3.5-kilowatt onboard charger, as we found out later).

Other than that, it would have been an unremarkable X5--and it would take a skillful eye to notice that the cargo deck was 1 inch higher than in a gasoline or diesel X5.

Under the floor, a 9-kilowatt-hour lithium-ion battery pack (using similar cells to those in the upcoming 2015 BMW i3 plug-in hybrid sports coupe) rode just over the rear axle, with a shallow compartment containing a 120-Volt charging cable behind it.

Like our prototype, the production version of the X5 e-Drive will forgo a spare tire, using either run-flat tires or a can of emergency sealant and inflator as an emergency measure.

The battery is cooled, when necessary, using refrigerant that loops through channels in the pack and shed their heat via the exchanger in the X5's standard air-conditioning system.

The powertrain dispenses with the six-cylinder and V-8 gasoline engines used in conventional X5s, and substitutes a 240-horsepower 2.0-liter turbocharged four-cylinder engine producing 255 lb-ft of torque.

A 70-kilowatt (95 hp) electric motor producing 185 lb-ft of torque is located between the engine and an adapted version of BMW's standard eight-speed automatic transmission.

The electric motor replaces the transmission's torque converter, and has a clutch on either side. A large engagement clutch sits between the engine and motor, plus a smaller "creeper" clutch between the motor and transmission to allow for smooth idle creep in traffic.

Output of the combined powertrain is expected to be 270 hp or higher, and 300 lb-ft of torque or higher.

Importantly for those in snowy climates, the standard BMW xDrive all-wheel-drive stays intact.

The xDrive system electronically controls torque distribution among the four wheels based on driving conditions, but sends power to all four wheels mechanically.

That system was used by the old Ford Escape Hybrid in its 4WD variant, but it differs from other hybrid SUVs.

The current Toyota Highlander Hybrid, for example, employs an all-wheel-drive system that drives the front wheels mechanically but uses an additional electric motor on the back axle to power the rear wheels when needed.

The X5 plug-in's default operating mode is currently to run in blended hybrid mode, using battery energy to run electrically where possible up to 42 mph, and the gasoline engine when more power is needed.

But BMW provides a "Max eDrive" button on the console, which serves as the equivalent of an "EV" button to keep the plug-in X5 running purely on battery energy.

Even then, as development engineer Dennis Paul noted, a "rescue function" engaged by pushing the accelerator past its normal stop right to the floor will switch on the engine for maximum power in emergency driving situations. We tested it, and it does just that.

Running in "Max e-Mode," once the battery pack's roughly 6 kilowatt-hours of usable energy are depleted, the X5 e-Drive reverts to operating like a conventional hybrid again.

There's also a "Save Battery" button, that kicks the car into blended hybrid operation immediately, retaining the battery's state of charge for later use--in a central-city zone that's restricted to zero-emission vehicles, for instance.

BMW has not included a function to recharge the battery using the engine, however--which is highly inefficient, but offered by at least one other plug-in hybrid maker (Honda).

The company did say that it was possible to recharge a depleted battery using regenerative braking if the route included long downhill stretches or other opportunities to recapture energy.

For a prototype 18 months or more from its U.S. launch, the X5 plug-in hybrid development vehicle we drove was pleasantly refined and seemed well on the way to showrooms.

There were a few lumpy transitions among engine, motor, and regenerative braking--the control algorithms for blending those disparate mechanical functions in a way that's not disturbing to passengers may be the most challenging part of developing a hybrid vehicle.

But overall, the two electric and gasoline characteristics of the plug-in X5 felt suitably complementary.

With a likely weight gain of 450 to 600 pounds over the nearest gasoline equivalent, the 4800-pound X5 xDrive 35i six-cylinder turbo model, the plug-in X5 is a heavy vehicle.

That it can move away from a stop and accelerate up to highway speeds on electricity alone is a tribute to the power delivery of its battery and the 70 kilowatts propelling it.

Electric-car veterans may find it disconcerting that the plug-in X5 shifts gears several times getting up to speed in electric mode.

Engineer Paul said this lets the company keep the motor in its most efficient operating range--noting that the motor turns at a far higher speed than the engine, so the transmission selects lower gears for the same speeds than it would in gasoline usage.

That said, performance in "Max e-Mode" is nothing like that in "Sport," when both the engine and motor are controlled to deliver fast power--and the X5 accelerates with surprising alacrity for what is, after all, more than 2 tons of large SUV.

The transmission shifts exceptionally quietly, although BMW is still in the process of blending in the output from the engine when it switches on in hybrid mode. Following maximum electric acceleration, there's a noticeable--if smooth--secondary surge of power once the engine kicks in and the turbo spools up.

But we suspect that most buyers will be comfortable with the all-electric mode, which seems likely to be rated somewhere between 15 and 20 miles.

BMW says 80 percent of X5s globally travel less than 30 km (19 miles) per trip, and it has achieved an electric-range rating of 30 km on the European cycle, which tends to produce higher numbers for electric range than do the EPA test cycles in the U.S.

And BMW plans to integrate information from the navigation system into the car's powertrain controls, so when a driver enters a destination into the system, the car works to arrive at that location with a fully depleted battery pack (unless the "Save Battery" switch has been triggered).

The navigation system will take into account not only distance, but also topography (elevation especially), prevailing speed limits, and real-time traffic information in assessing the most efficient deployment of battery and gasoline energy.

Benefits of BMW i program

Many of the technologies in the future BMW X5 e-Drive are derived--loosely or completely--from the company's "BMW i" project, which has led to the dedicated 2014 BMW i3 battery-electric hatchback and the 2015 BMW i3 plug-in hybrid sports coupe.

The plug-in hybrid X5's battery cells are similar to those in the i8 coupe, as is its battery-management software. Power electronics come from the BMW i program too. The electric motor and eight-speed transmission combination has already been used on the current ActiveHybrid models of the BMW 3-, 5-, and 7-Series sedans.

While it's far too early to expect information on prices, BMW noted that its pricing structure is roughly proportional to powertrain output--so the X5 e-Drive would come in at a starting price higher than that of the less powerful X5 xDrive 35i, which for 2014 starts at $52,800.