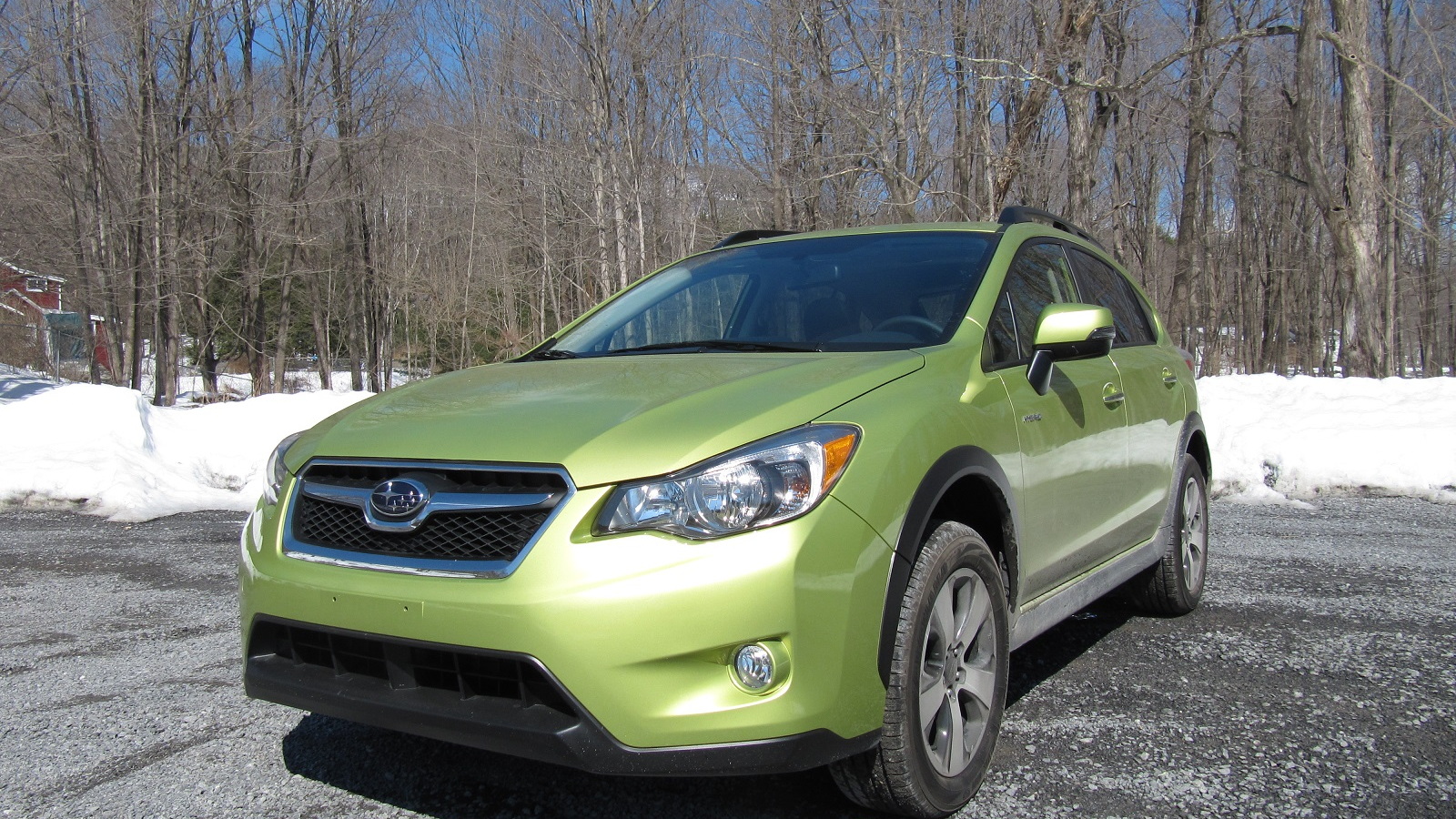 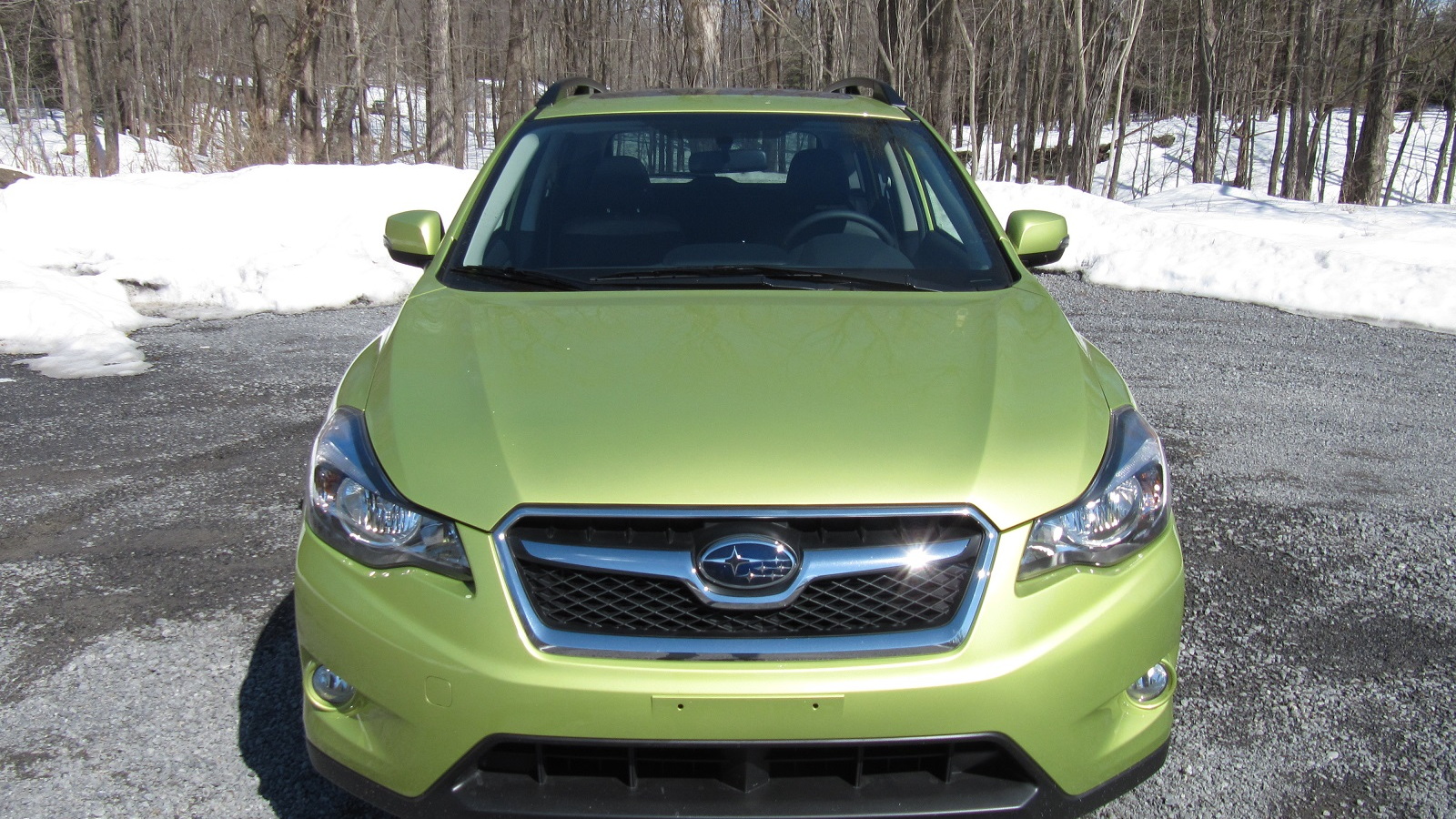 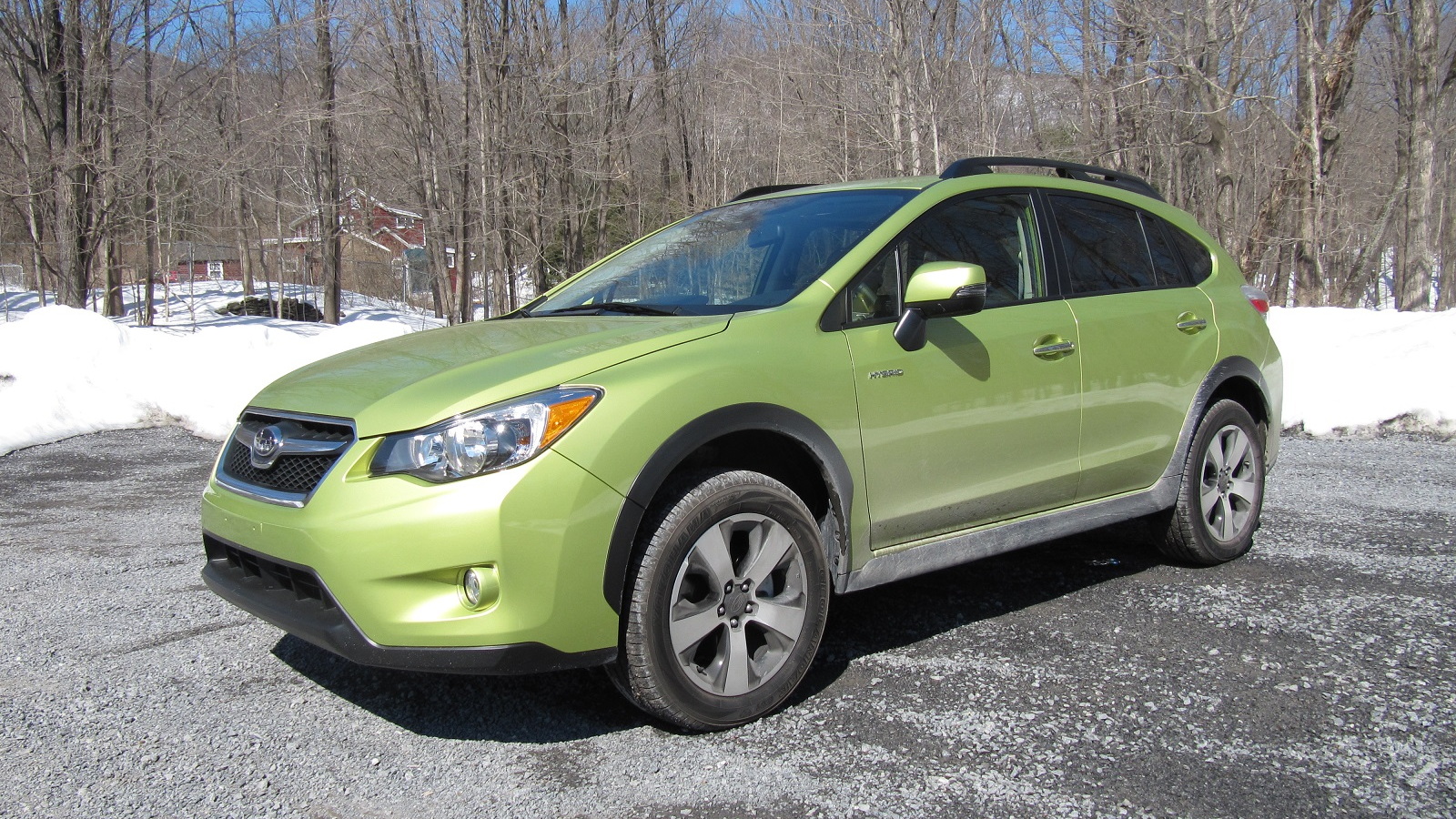 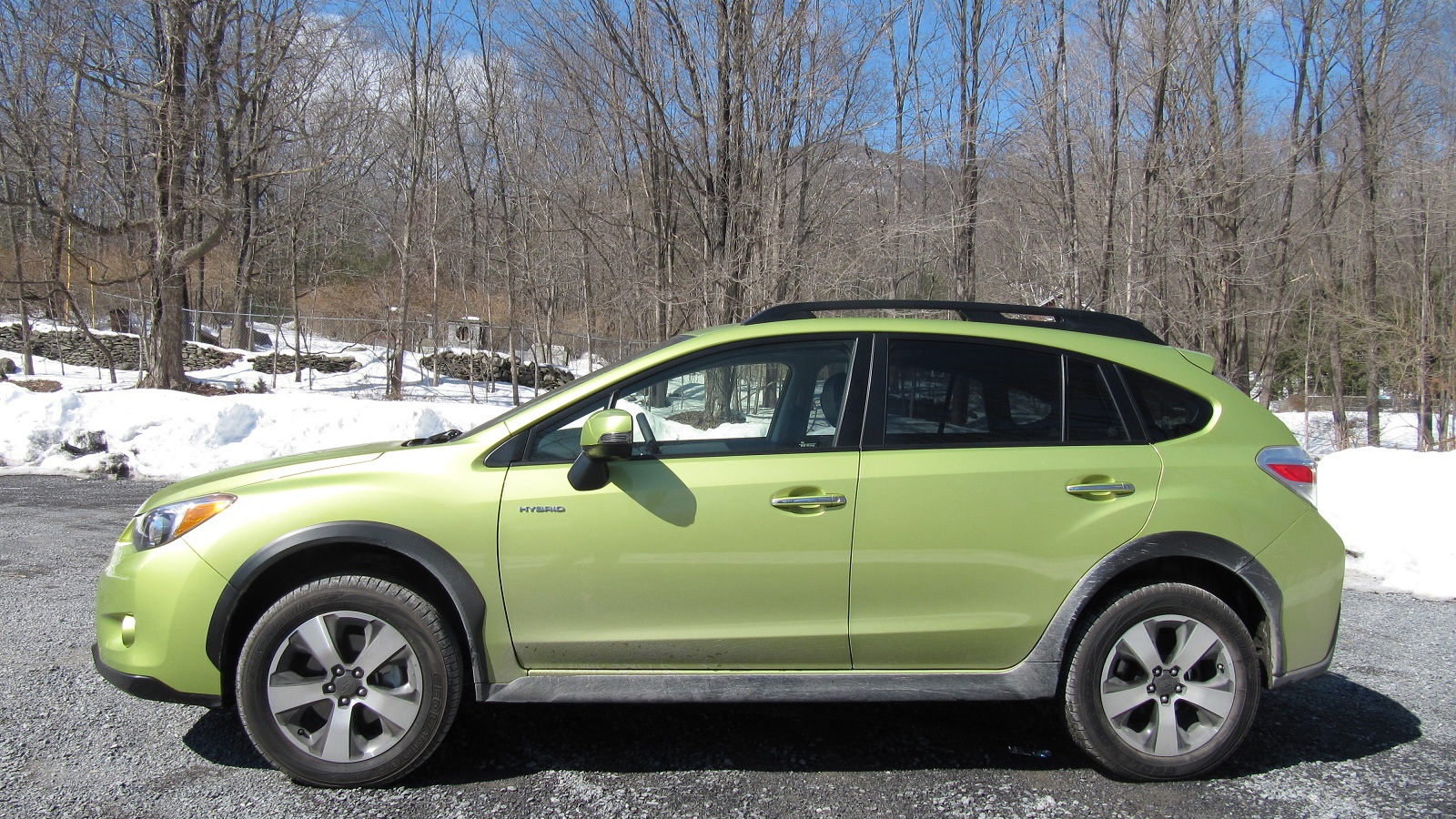 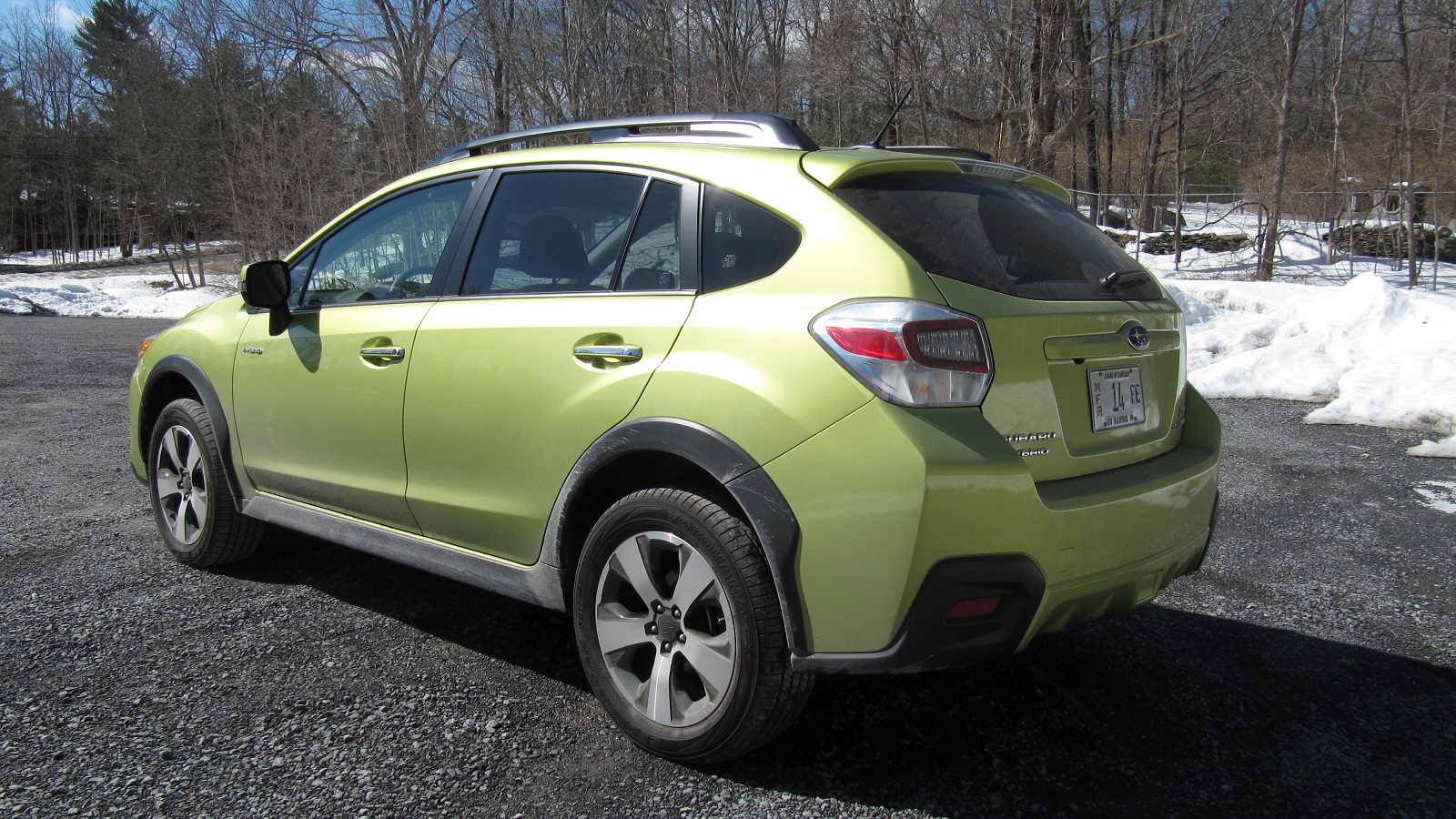 If ever any car brand should have offered a hybrid before now, it would be Subaru.

It's a much better car than the Crosstrek on which it's based, but little of that improvement has anything to do with the hybrid powertrain.

Fuel economy: Call it a draw?

Over a 445-mile four-day test drive, we achieved 29.1 mpg from our hybrid Crosstrek as shown on its fuel-economy display--12 percent lower than the combined rating, but within an expected margin of variability, given the cold winter weather.

By comparison, we achieved 30.3 mpg over 700 miles of testing a conventional gasoline Crosstrek in slightly warmer winter weather. While that's marginally higher than what the hybrid gave us, we'd call it a draw given the variabilities of our test cycles and the weather.

(We also noted that lifetime fuel economy for the car's 1,023 miles to date was 27.6 mpg, perhaps reflecting a lot of short moves and shuttling to and fro.)

As with many cars, we'd be curious to repeat our test of the Crosstrek Hybrid in warmer summer weather to see if there's much difference in recorded fuel economy.

Hybrids are a natural for Subaru because many of its all-wheel-drive cars and crossovers are bought by outdoorsy, environmentally-focused "active" consumers who hike, kayak, spelunk, and rock-climb.

In fact, according to statistics from several years ago, Subaru owners are more likely to vote for progressive causes than those of almost any other brand.

But Subaru is small, and stubborn, so it's taken them more than a decade of design, engineering, and testing before introducing their own hybrid.

Contrary to expectations, it's not based on the Toyota Hybrid Synergy Drive system used in about 5 million hybrids globally--even though Toyota owns a significant minority share in Subaru.

Going its own way

Instead, Subaru's hybrid is a single-motor system that sandwiches a small 10-kilowatt (13-horsepower) electric motor between the Crosstrek's 2.0-liter flat-four engine and the company's LinearTronic continuously variable transmission (CVT).

The motor can propel the car away from a stop, under very gentle acceleration, making this a full hybrid system--but only barely.

Its main function is to recapture energy through regenerative braking that would otherwise be wasted, store it in a 0.6-kilowatt-hour nickel-metal-hydride battery pack located under the rear cargo bay, and use that energy both to supplement engine output and to restart the engine when it switches off at stops.

While this is a very similar design to Honda's soon-to-be-obsolete Integrated Motor Assist (IMA) system, which has been around since 2000, the Subaru system delivers at least some all-electric running--which the Honda system really doesn't in any meaningful way.

On the other hand, the Crosstrek Hybrid dropped into "EV" mode on deceleration at speeds up to 40 mph, which regained energy on downhill roads--and it managed to provide idle creep all-electrically as well.

Still, this is not a hybrid system like those from Toyota, Ford, Hyundai, or any of the other makers whose motors--rated at 30 kW (40 hp) or higher--can regularly move the car away from a stop on battery power alone.

The first hybrid from any carmaker teaches its engineers a tough lesson: Getting smooth blending among engine, motor, transmission, and braking under all driving circumstances is very, very hard.

The first 2011 Hyundai Sonata Hybrid, for example, was downright unpleasant to drive under certain conditions; the revised 2013 model, with dozens of upgrades, was much better.

In that context, Subaru has done well with its own first hybrid, providing a mostly decent--if not stellar--driving experience.

The main area for its engineers to work on is the perceptible shuddering when the engine switches on at low speeds. It's masked at higher speeds, but in stop-and-go traffic, where idle creep switches between battery and engine power, it's noticeable--and a distraction.

The start-stop function works decently, and the engine switching itself off was almost imperceptible. Like most such systems, if the heating and ventilation system is working hard, or the outside temperature is 14 degrees F or lower, the engine doesn't switch off even if the hybrid battery is charged.

Part of the weight gain, we noted, comes from the hybrid Crosstrek having a second 12-Volt battery, one in each front corner of the engine compartment. One starts the engine, the other is used to power auxiliaries (lights, ventilation fans, audio, and the like) while the engine is off.

Under certain circumstances, the brakes weren't linear in feel as they transitioned from regenerative to friction braking or back.

As well, the hybrid Crosstrek displayed a flat spot in hard acceleration, taking up to a couple of seconds for the transmission to change ratios and the electric motor to kick in for extra power.

And finally, hard acceleration at highway speeds produced more noise than forward motion--a problem not specific to the Hybrid, but shared with the CVT-equipped Crostrek, which propels 2,700 or more pounds with only a 148-hp 2.0-liter four-cylinder engine.

We had several major complaints about the standard Crosstrek we tested last year--which we wanted to like for its packaging and all-wheel drive.

It wandered easily at highway speeds, its steering was numb, it was nervous and hard to keep on line, and it proved surprisingly susceptible to crosswinds. Plus, it was astoundingly noisy on certain types of pavement.

Much of that has been fixed in the Crosstrek Hybrid, to our great relief.

Subaru identified five changes to the suspension and no fewer than a dozen different upgrades to address noise, vibration, and harshness that it made while engineering the Hybrid version.

While the initial goal had been to accommodate the hybrid's extra weight--a hybrid Crosstrek weighs 3,484 pounds, or about 300 pounds more than the CVT-equipped gasoline model--engineers also made the car sportier to drive and quieter to ride in as well.

Among the changes to reduce noise and vibration were new liquid-filled engine mounts, improved insulation and damping materials in eight different areas of the car, a sound insulation film added between the glass layers of the windshield, a new steering-vibration damper, and even a thicker front floor-pan stamping.

And it works. While the steering is still number than we remember from the basic Impreza hachback, it's better than last year's Crosstrek.

More importantly, the Hybrid model doesn't wander, it's not so nervous, and the inputs required to keep it tracking straight are significantly reduced (though not altogether eliminated).

And it no longer howls, roars, and moans on rough pavement. It is, in other words, within competitive range of its class for suppression of noise, vibration, and harshness. Color us relieved.

In the end, we suspect Subaru will sell a decent number of hybrid Crosstreks simply because their buyers will want them.

The more relevant question seems to be whether the many changes to the car's suspension, handling, and insulation will be fitted to the non-hybrid Crosstrek as well.

Subaru told us it doesn't comment on future models--but we're betting the answer is yes. We sure hope so, anyhow.

Other random observations from our four days with the hybrid Crosstrek:

The hybrid Crosstrek was otherwise an improved, pleasanter model of the basic Crosstrek--a car so popular that Subaru has had to cut back allocations of the base Impreza compact models to get enough Crosstreks to meet demand.

Just like the original Outback of 1995, the Crosstrek filled a niche left largely empty by the departure of the Suzuki SX4: a small, practical, all-wheel-drive five-door hatchback. In other words, Subaru nailed it again.

The Hybrid, however? It doesn't seem as if it'll gain you a whole lot of gas mileage. That's OK; Subaru devotees may buy them anyway.

No options at all

Our 2014 Subaru XV Crosstrek Hybrid Touring test car came in a particularly virulent shade of lime green called Plasma Green Pearl. The color is an acquired taste, but it made the car easy to find in parking lots.

Adding the mandatory destination charge of $825, the window-sticker bottom line on our test car was $30,120.