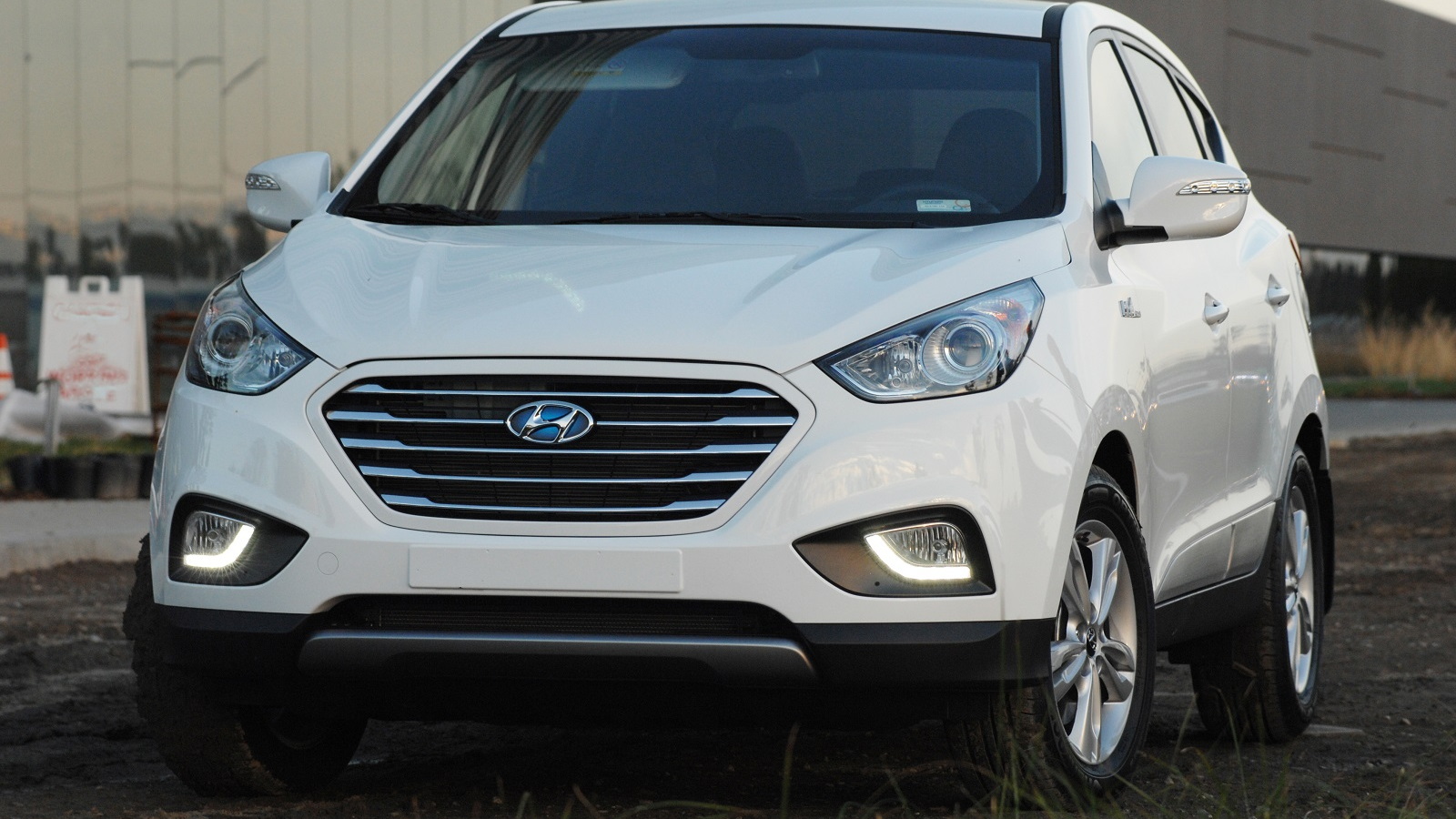 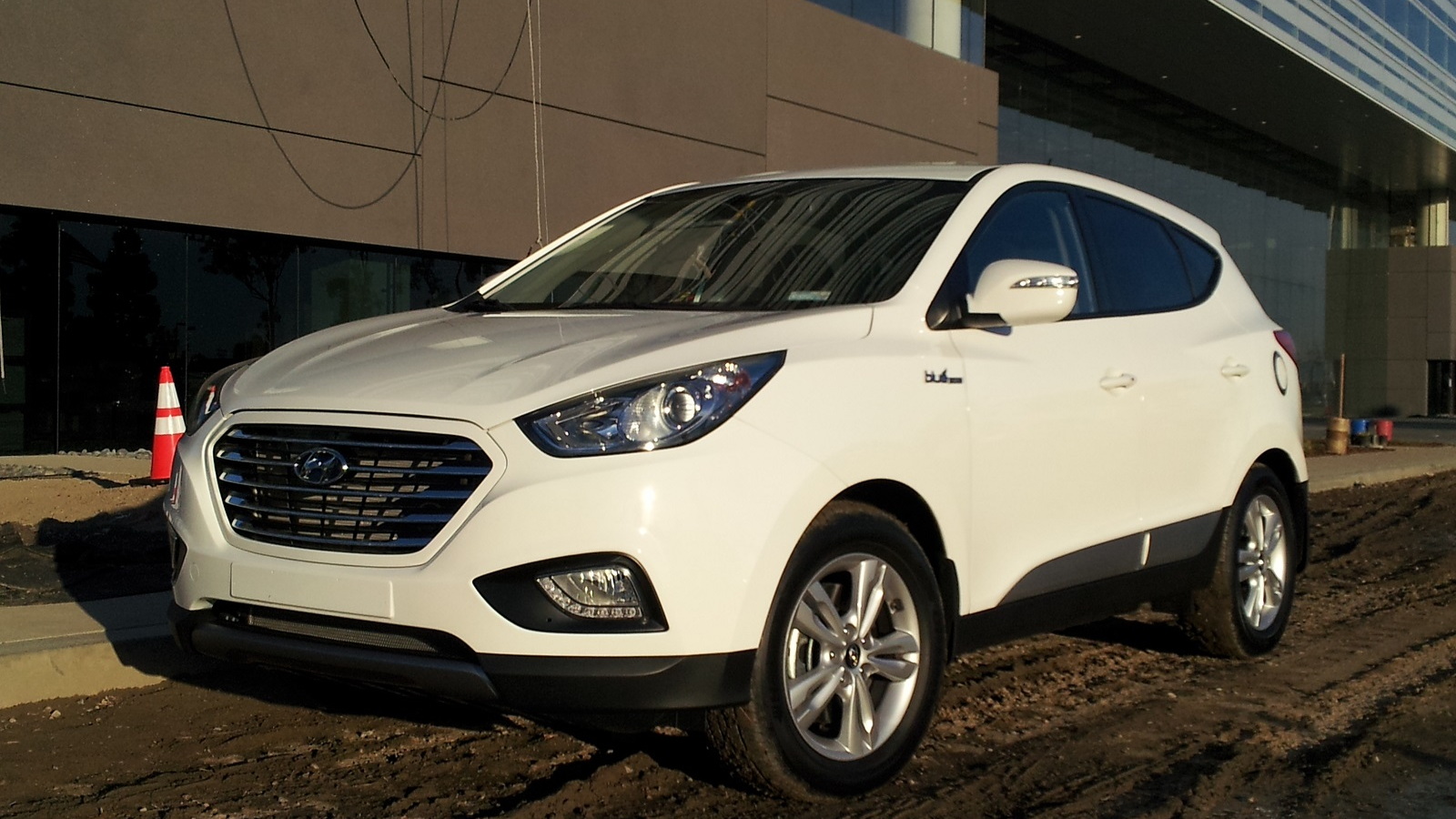 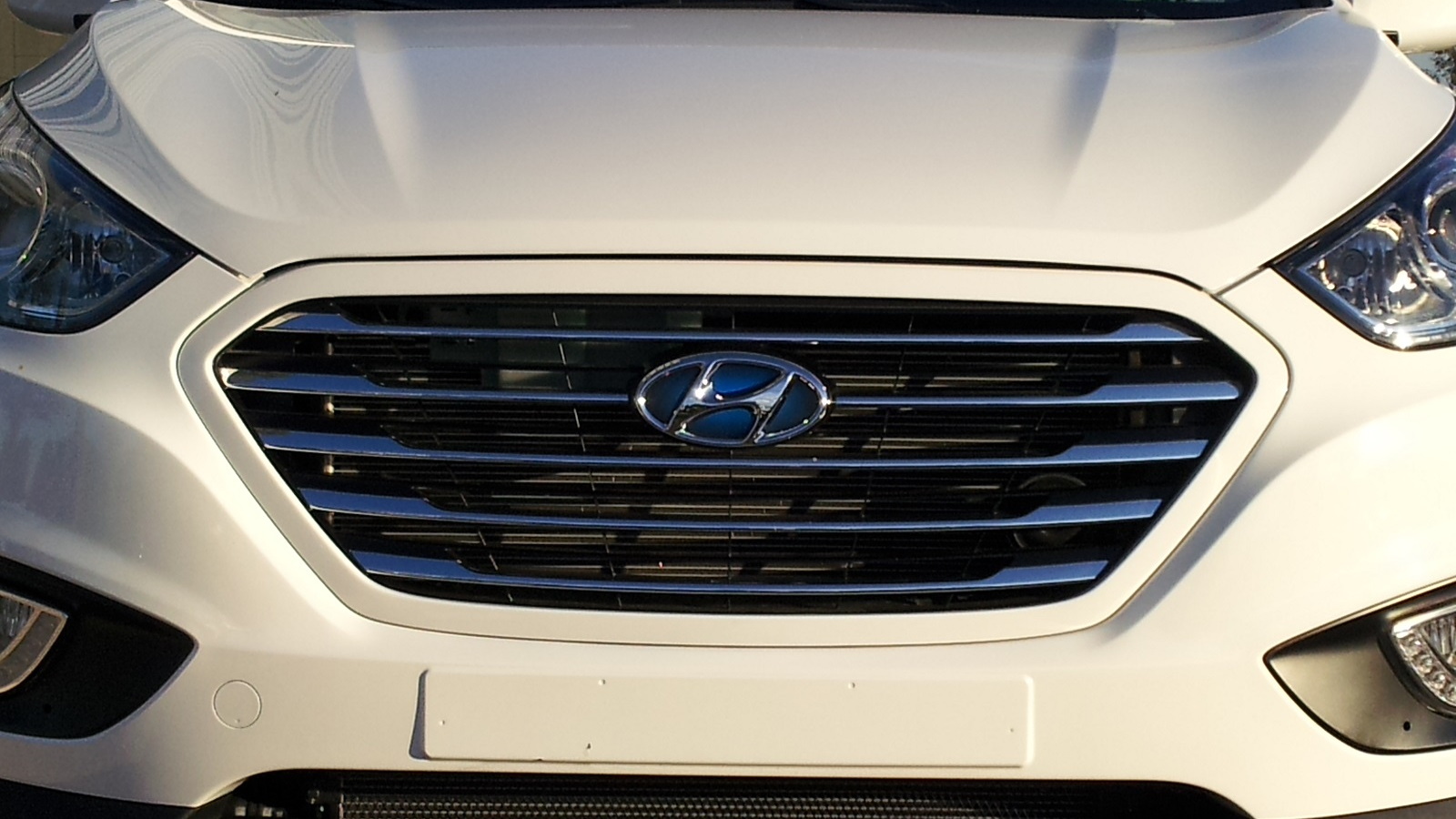 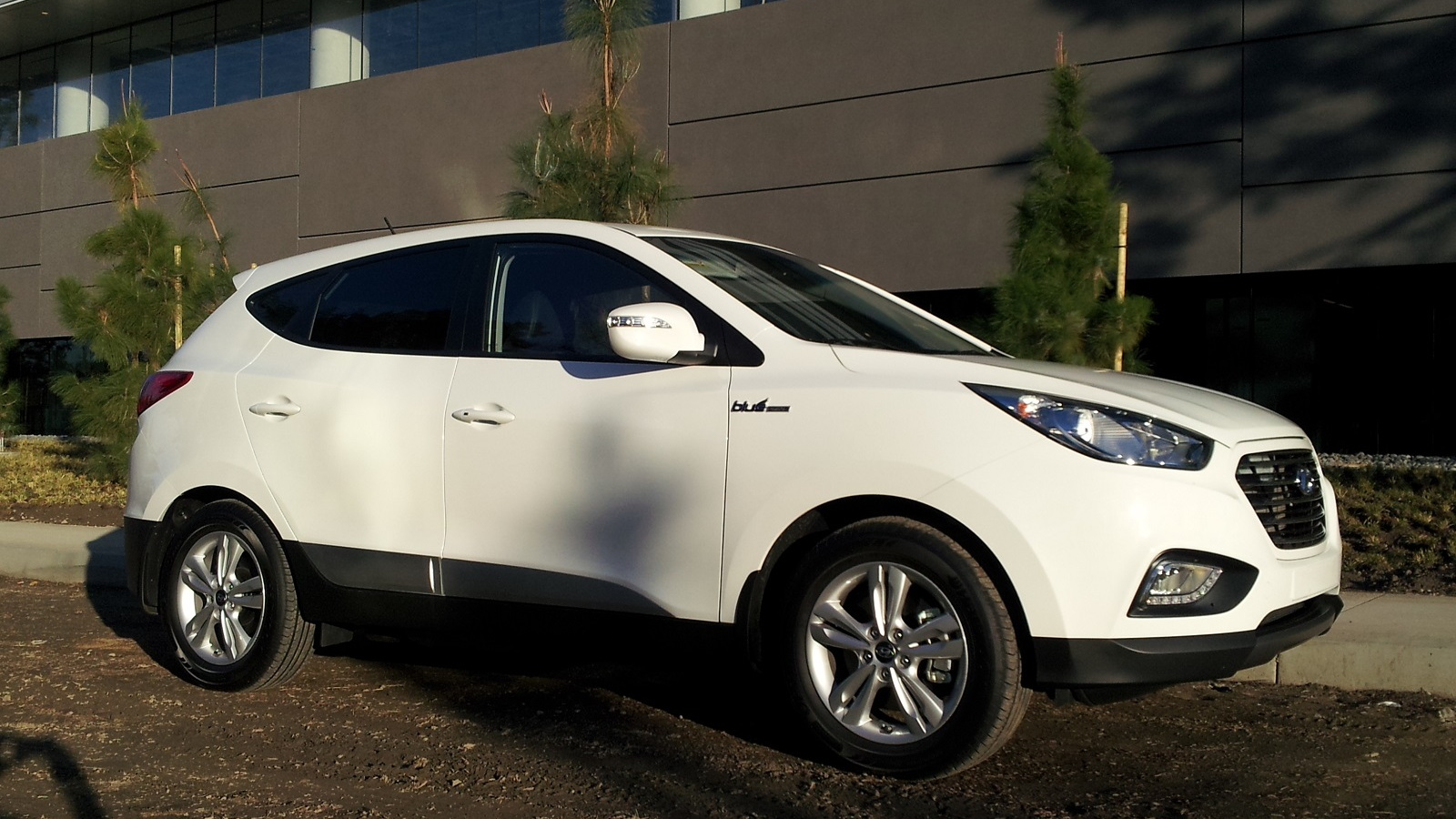 Hyundai is an aggressive company, and that applies to its green cars as much as the bread-and-butter sedans and crossovers it sells in growing numbers.

So when the company approached Green Car Reports to ask if we'd like to drive its new, hydrogen-powered 2015 Hyundai Tucson Fuel Cell vehicle, that was a no-brainer.

All in all, we spent about two hours in the zero-emission compact crossover, mixing freeway driving and suburban stop-and-go travel with a refueling stop at a rare hydrogen filling station. 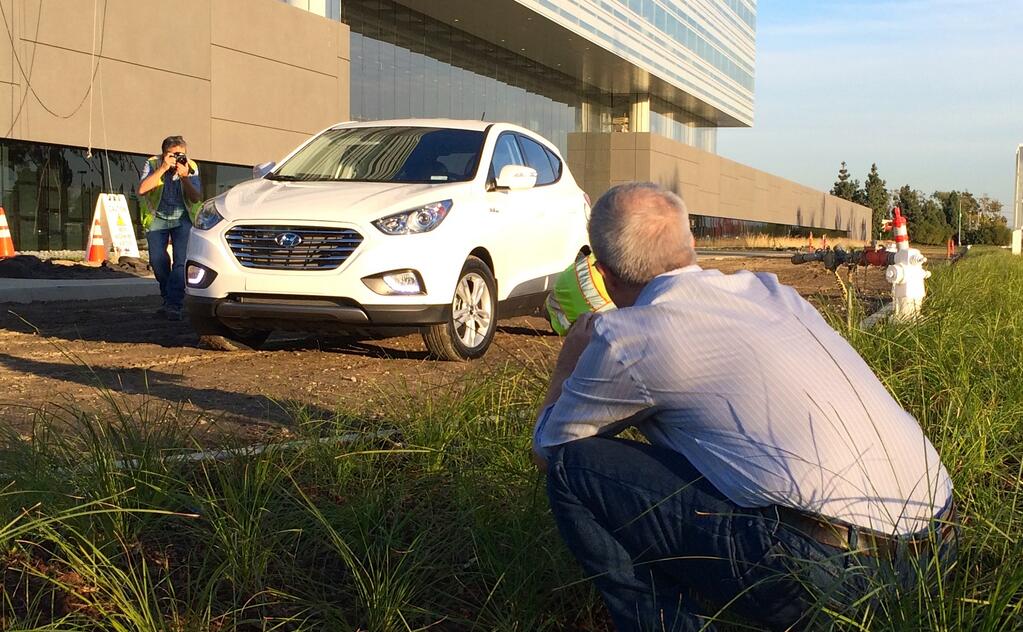 Hyundai has been developed its own fuel-cell technology since 2000, and has shown a few concept cars over the years.

The Tucson Fuel Cell was announced at the Paris Motor Show in September 2012, where it was known as the ix35 Fuel Cell (the Tucson's model name in Europe).

It entered production this past February, and it was one of three hydrogen fuel-cell cars shown at November's auto shows in Tokyo and Los Angeles.

Now, its first low-volume production hydrogen car--built on the same Tucson assembly line in South Korea as the gasoline version we get--is here. 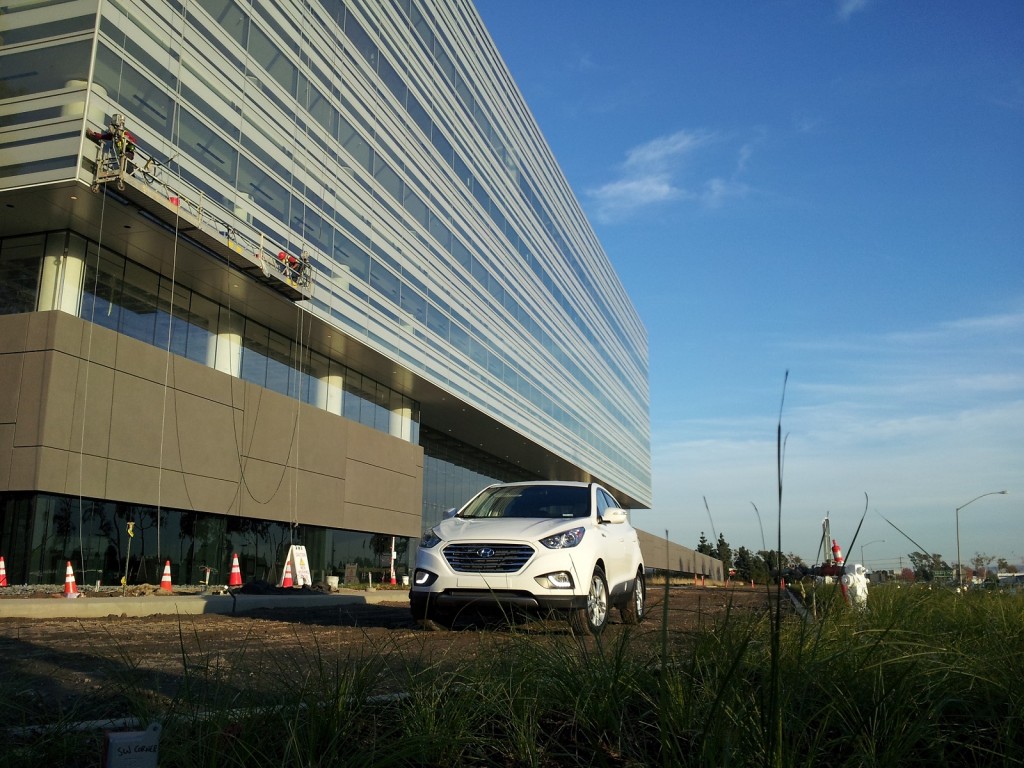 Hyundai Motors America president and CEO John Krafcik says the company expects to build and sell roughly 1,000 Tucson Fuel Cells over the next two years, though if demand is higher than that, there's a possibility that the number could rise.

Until Toyota launches the 2015 production version of its FCV fuel-cell car--shown in near-production form at the recent Tokyo Motor Show--that makes the hydrogen Tucson the world's highest-volume fuel-cell vehicle.

So what's the bottom line on this alternative to plug-in battery-powered electric cars?

From the front, the hydrogen Hyundai uses the European ix35 grille and front fascia--giving it a different appearance to the gasoline Tucson, a trick Hyundai also used with its Sonata Hybrid. We think it's a smart tactic, and looks good.

Behind the wheel, it's a very pleasant, quiet, electrically-driven crossover that many buyers won't know is alternatively powered until they have to fuel it up (and hence face the challenge of locating a hydrogen station).

Hyundai is proud that its fuel-cell stack operates at close to atmospheric pressure, which reduces the size--and hence noise--of the various pumps and compressors required to operate and cool the cell.

As a result, electric-car drivers would find the Tucson's driving experience quite familiar. 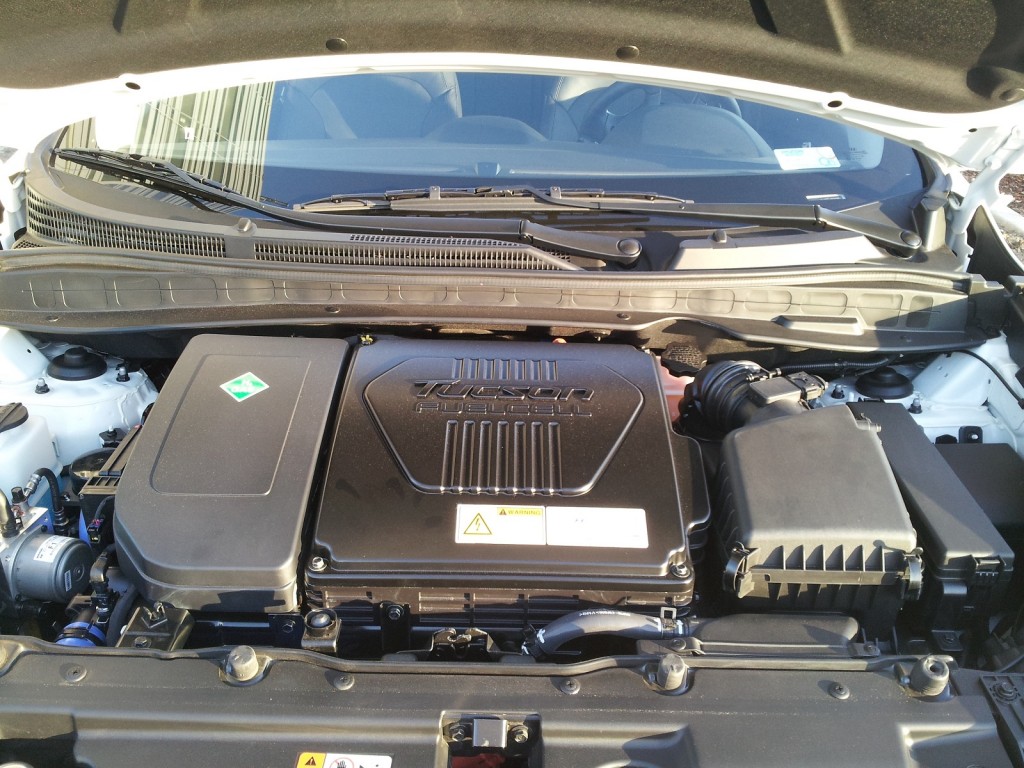 Its front wheels are driven by a 100-kilowatt (134-horsepower) electric motor with 221 lb-ft of torque, meaning that it pulls away smartly (and quietly) from stops and is relatively spry, if heavy, around town.

Hyundai has included the lithium-ion battery pack from a Sonata Hybrid in the hydrogen Tucson, to provide extra assist when maximum power is required, located below the front seats.

That 96-pound pack's nominal capacity is 1.4 kilowatt-hours, but the usable energy is 0.95 kWh, according to Gil Castillo, Hyundai's senior group manager for alternative and advanced vehicle strategy.

The fuel-cell Tucson's biggest drawback is its lack of power at highway speeds. While its acceleration is fine around town, flooring it at, say, 60 mph causes the heavy hydrogen crossover to gain speed--but agonizingly slowly.

Passing maneuvers on the highway require a lot of advance planning, though they're not impossible, but the lack of high-speed acceleration is the one feature where the fuel-cell Tucson fails to provide the same capability as the gasoline model. 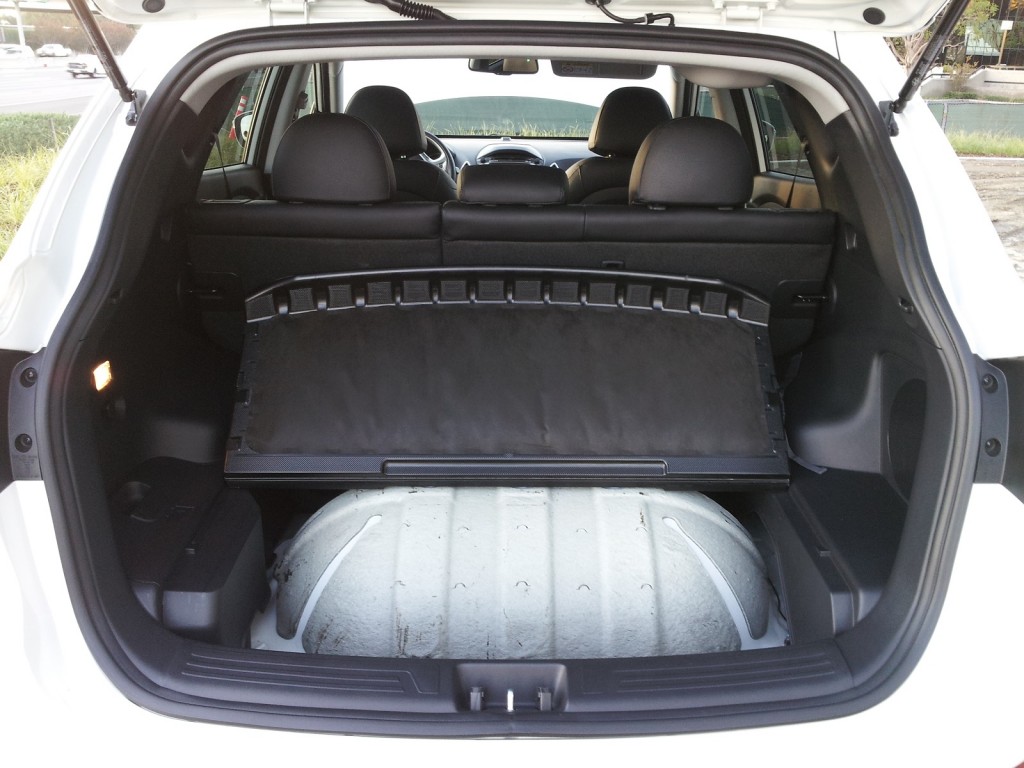 The standard Hyundai Tucson, for the record, comes with a 182-hp 2.4-liter four-cylinder engine driving the front wheels through a six-speed automatic transmission, with all-wheel drive optional. (There's no AWD option for the hydrogen Tucson.)

Two transverse tanks for hydrogen compressed to about 10,000 pounds per square inch (70 Megapascals) are located under the rear seat and under the rear load bay, just ahead of and behind the rear axle.

Fueling the Tucson FC was relatively similar to standard gasoline refueling. We used a combined natural-gas and hydrogen station located on an Orange County Sanitation District facility in Fountain Valley, California. (Hyundai's U.S. headquarters are located in the same city.)

After pulling up to the hydrogen pump, Castillo entered a code into the pump's keypad that released the hydrogen nozzle from its holder. The filling fixture is located behind a conventional gas door, and the nozzle has to be locked onto the tank filler via a lever in its handle.

We noticed two differences from gasoline filling: First, the filling station's hydrogen compressor, behind a fence across the lane from the filling station, kicked on to bring the pressure up to the 10,000-psi standard for the Tucson. (Older hydrogen fuel-cell cars use tanks pressurized to 5,000 psi, or 35 MPa.) That took a little more than a minute.

Second, the filling nozzle itself was icy cold, though the handle attached to it was insulated. It's not dangerous, but it's different.

Because the Tucson's hydrogen tanks were about two-thirds full already, filling them to 95 percent went more slowly because the fuel had to be compressed to a higher pressure. 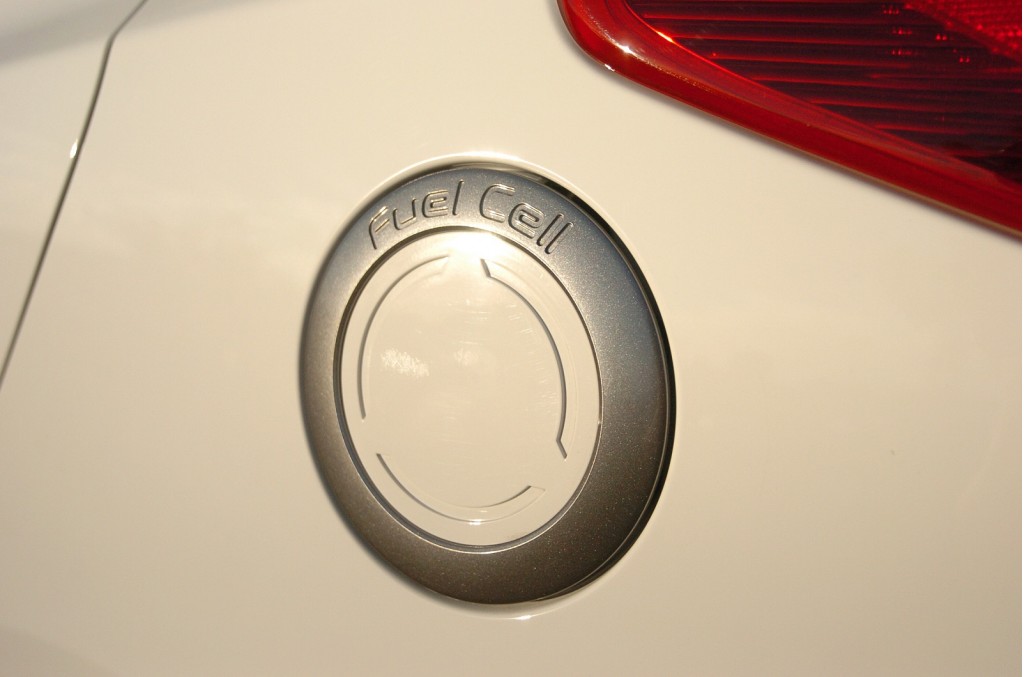 Still, we were in and out in the promised 10-minute window.

So how many hydrogen fueling stations are there?

In the country as a whole, there are 10, according to the U.S. Department of Energy's alternative-fuel station map.

Eight of those are in Southern California, where the first hydrogen fuel-cell cars will be rolled out--starting with the Tucson next spring--the state plans to fund up to 40 such stations by the end of next year.

California officials set a goal earlier this year of 70 hydrogen fueling stations by 2016. The ultimate goal, over several years, is 100 hydrogen filling locations in the state.

We enjoyed our drive in the 2015 Hyundai Tucson Fuel Cell, though we have some reservations about its margin of power at highway speeds.

For those customers who sign on the line to lease the hydrogen Hyundai, the biggest question will be: Where can I fuel it?

They'll be counted on the state of California's plans to ensure that they don't have to drive 20 miles or more out of their way to refill with hydrogen.