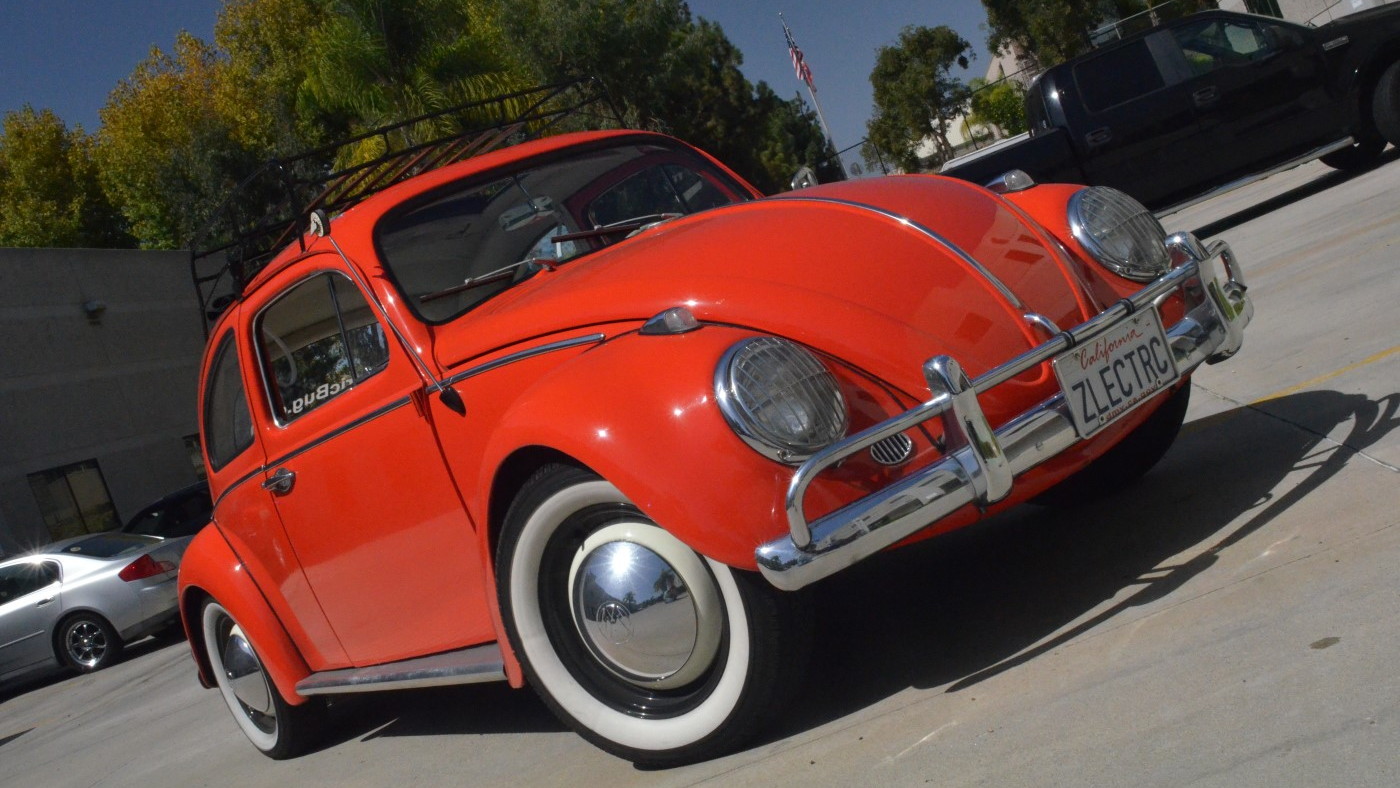 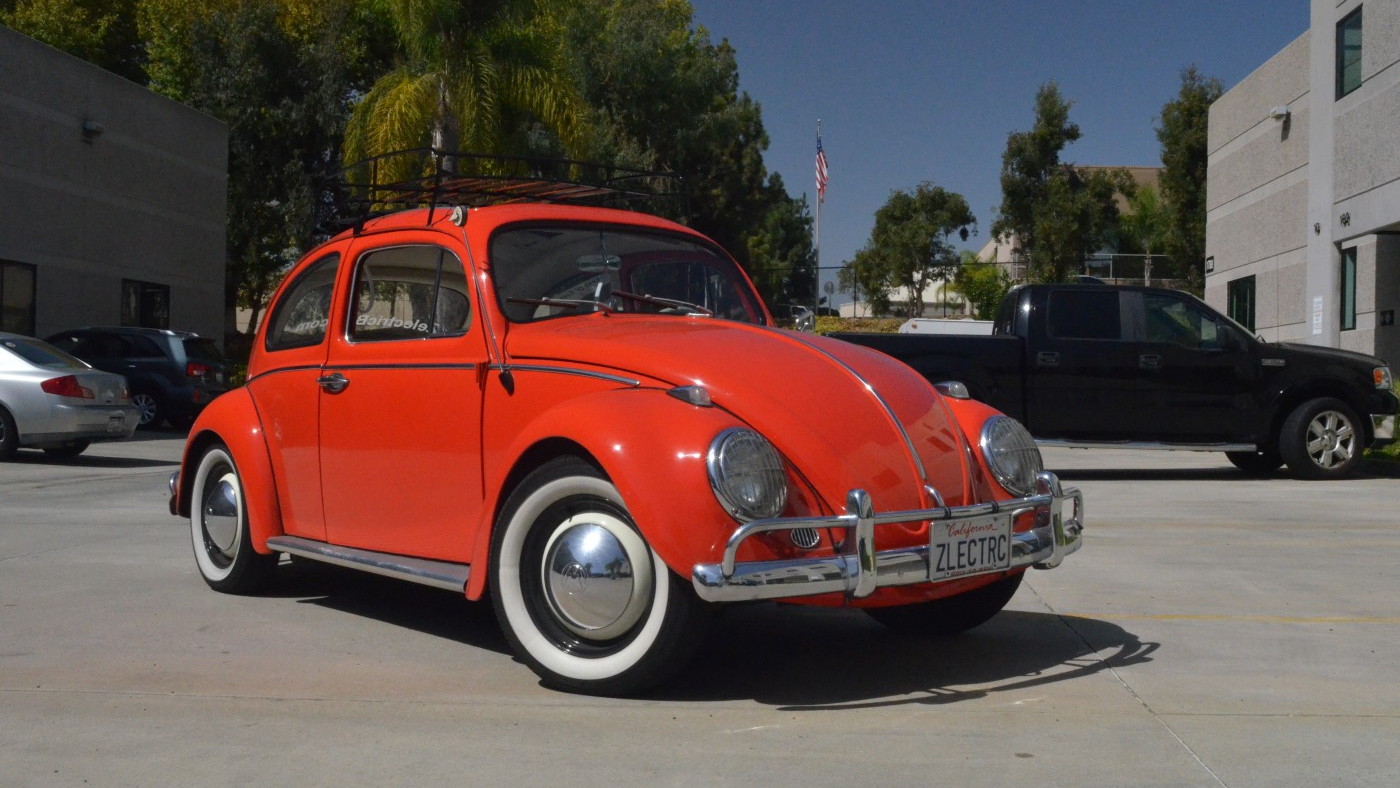 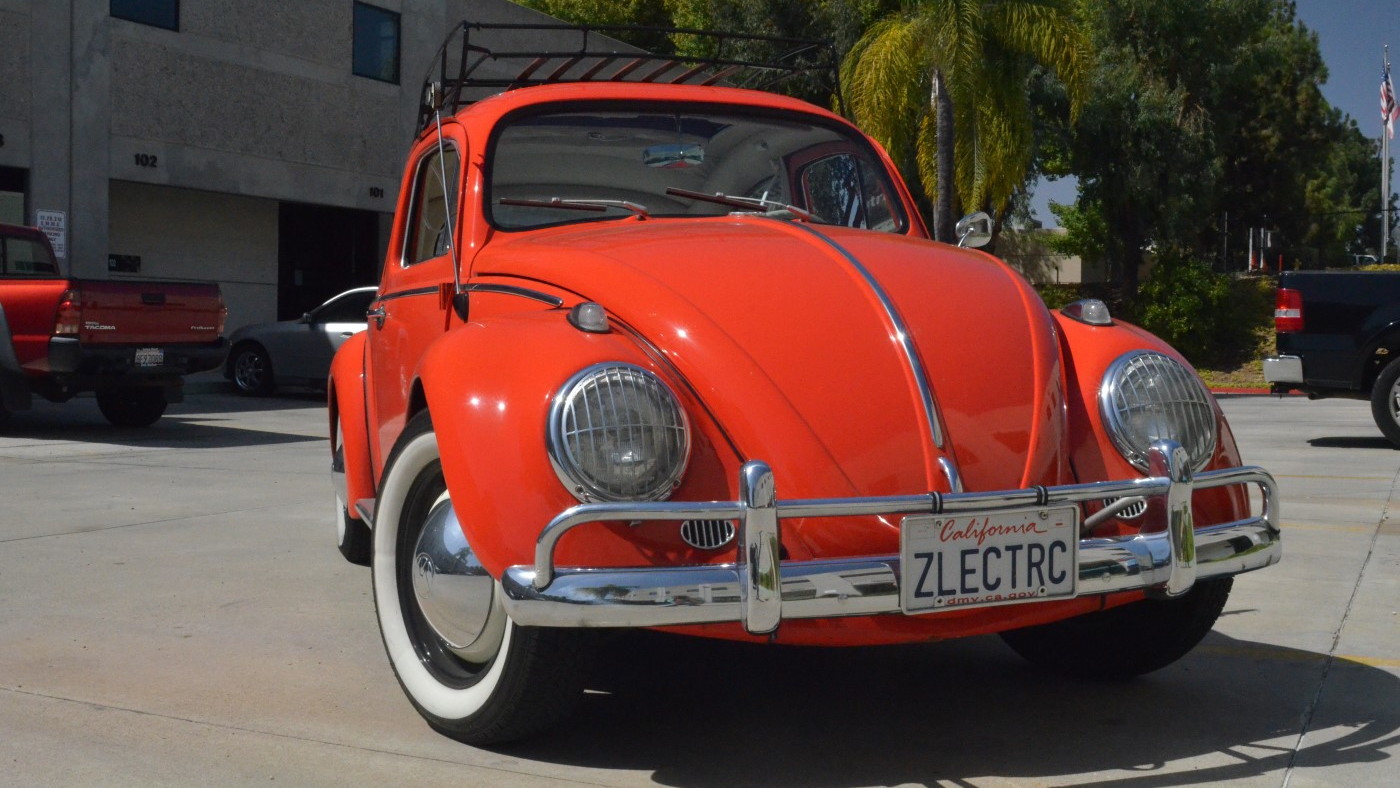 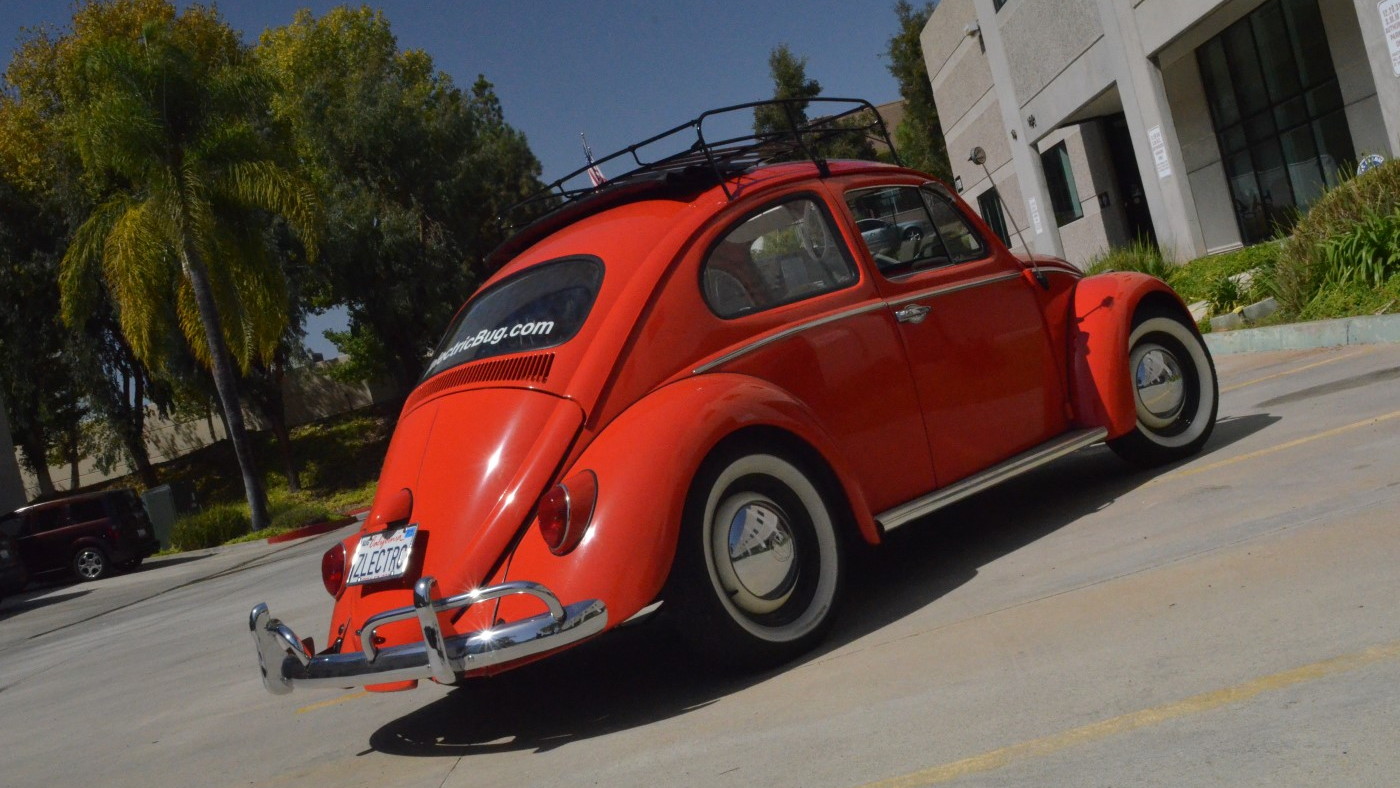 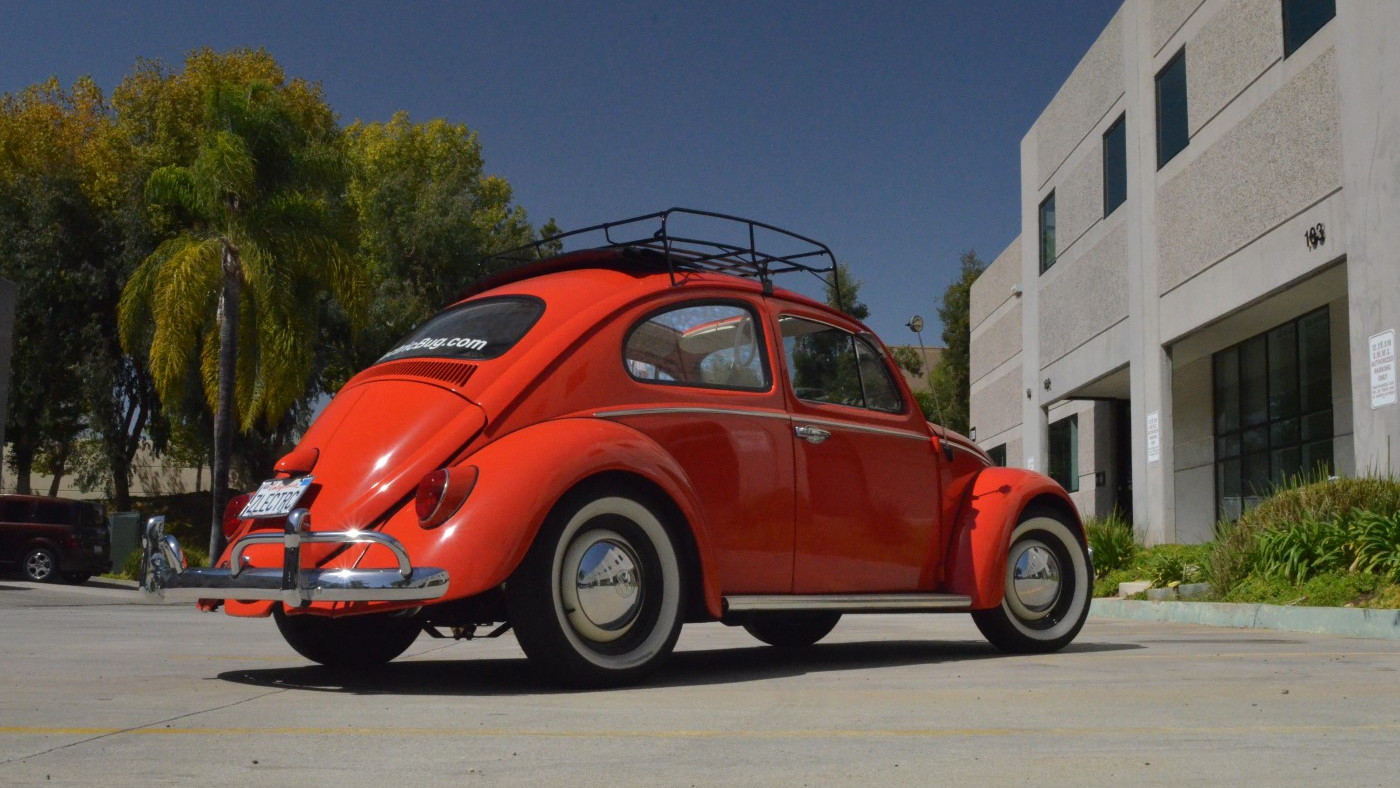 19
photos
There is a line of thinking, naturally not shared by many of our readers, that engine noise is an integral part of the experience of driving a car. Lack of it in electric cars is one of myriad reasons the average gearhead is still skeptical of EVs.

You may think then that swapping the familiar chunter of a Volkswagen Beetle's flat-four gasoline engine would be a recipe for disaster--removing a characteristic that has remained with the car since its conception and been a part of billions of Beetle miles over the decades.

Driving David Bernardo's ZelectricBug--a 1963 Volkswagen Beetle converted to electric power--there is an element of truth in this.

But happily, the car still bristles with character in a way no modern electric car--nor most modern internally-combusting vehicles--can hope to match. It is still very much a classic vehicle: just one with a highly modern propulsion system.

The ZelectricBug you see here is the first prototype from David's company, Zelectric Motors. All Bugs converted by the company will be 58-66 models, which for many offer the best mix of style and usability, even if they aren't quite as sophisticated underneath as later Beetles.

Well, in terms of suspension design at least, since all converted Beetles will be decades ahead in the engine bay.

The traditional flat four makes way--in the prototype--for an 80-horsepower, 110 lb-ft electric motor. That's around double what the standard engine would have provided and a healthy chunk more than the most powerful 1600cc factory cars VW produced during the Beetle's production run.

Unusually, at least if you're used to modern electric cars, the ZelectricBug features a manual transmission, retaining the original car's four-speed setup. More on this shortly.

Power comes from a 24 kWh (like the Nissan Leaf) collection of LiFePO4 batteries, split between the luggage compartment aft of the rear seats, and under the front trunk where the gas tank previously lived. Despite the batteries and motor adding around 250 lb to the Beetle's weight, it's still a good 1,000 lb lighter than a Nissan Leaf. And despite its lack of aerodynamic and rolling sophistication next to the Nissan, range is a real-world 90-110 miles.

The devil is in the details

The incredibly keen-eyed might note the absence of the familiar twin pea-shooter tailpipes. Inside, only the small, chrome-rimmed digital battery gauge gives it away, slotting neatly where the original square gas gauge would have sat. In fact, the only real giveaways that the '63 has anything different about it are the clever license plate and the large sticker across the rear window. The rest just looks like--and is--a beautifully-restored 1960s Beetle.

Until you open the (rear mounted, naturally) hood. Then, you're presented with the futuristic shapes of electronic controllers, cooling components, brushed aluminum and the obligatory bright orange of electrical cables.

Weirdly, it looks at a glance like a highly-updated take on the Beetle's normal engine, partly because it sits in the same longitudinal fashion connected to the same gearbox. But it's a lot more sci-fi and the presentation is first-rate.

While EV West is best known for successsfully tackling the Pikes Peak hill climb in their electric BMW M3 (which owner Michael Bream generously offered me a highly entertaining ride in), the company also handles the drivetrain side of the ZelectricBug. It's as professional an install as you'd expect from a company so familiar with race car engineering--and usefully, retains the option for conversion back to the original engine, should the prices of Beetles really go through the roof.

Good examples of Beetle engines fire with satisfying conviction on a turn of the key and maybe a few pumps of the gas.

ZelectricBug doesn't "fire" at all. Nor is there an other-worldly "bong" or jingle as with modern EVs. It's just "on" as you click the small VW badge-shaped key one notch clockwise.

Then, as with a regular manual transmission vehicle, you must depress the clutch and select (in this case), second gear. Forget the clutch first time as I did and the electric motor thrums away unhappily at you as you apply the floor-hinged accelerator. Correctly selected, you move off (now without the clutch) in untypical-for-a-Beetle silence.

Untypical-for-a-Beetle speed, too. Second gear begins to get a bit noisy at around 40-45 mph, but up to that speed performance is as brisk as you'd expect from a 2,200 lb, 80-hp car with instant torque.

You can then change to third (remember the clutch again), trying to defeat muscle memory that tells you to lift off the gas as you change: the smoothest changes are had by maintaining revs at the motor as you shift. Or, if this sounds like hard work, simply start off in third--it'll pull away quite happily and not stop until it's doing over 80 mph.

In other words, it'll make mincemeat of all but highly-tuned regular Beetles but won't drip oil all over your garage floor. Or need regular maintenance. Or indeed, consume any fuel. With a J1772 charging port, you can pretty much charge it anywhere, too.

That includes going down hills, as the ZelectricBug features regenerative braking. Due to the choice of gears, the effect ranges from the expected to the surprisingly swift. In second, you'd barely ever need to use the brakes.

In fact, retardation is so strong in second that David is considering a system to illuminate the brake lights when decelerating. The brakes themselves will be updated to rotors (currently, it's drums all around) to ensure emergency braking is strong enough to deal with modern traffic.

All that aside, it feels like... well, like driving a Beetle. An old swing-axle Beetle admittedly, and while we went fairly easy on the car on our SoCal drive we'd imagine on-the-limit driving characteristics to be similar to that of the original and therefore demanding of a little respect.

But hey, practical and well-performing as it is, no electric car produced by a major manufacturer has had styling as eye-catching as this. If ever you wanted to travel slowly--to be seen--this is a car to do it in.

And if you wanted to carve corners, powertrain engineer EV West has a few interesting projects on the go based on more traditional performance vehicles.

But what if you wanted one of Zelectric Motors' Beetles?

If that were the case, you'll need a healthy $45,000. Sounds like a lot. And we suppose it is a lot. David says more than a few people have stood aghast when hearing the price. Many expect closer to $20,000, or less.

If you know anything about Beetles though, the price makes sense. Only an optimist could expect to buy a regular, gasoline-slurping Beetle of this vintage (in this condition) for $15K-20K, and when considering all the engineering and research in the car--not to mention buying the donor and restoring it--the price sounds fair to us.

It isn't for everyone, of course: you can pick up a Leaf or Volt for significantly less than $45K. And a sixties Beetle doesn't quite match those cars for equipment or safety, or even performance.

But it kicks their collective butts (and any other production EV) for character, and as such a $45K electric Beetle built to such high standards is highly attractive for some. Zelectric Motors' first customer car, in black, is already nearing completion. And a gray '59 has just returned from the paint shop ready for work to start. The trickle begins.

Back to the original question though: Is noise an integral part of driving an old car?

Of course it is. It always will be. And true to form, ZelectricBug squeaks, whines and rustles through the air with the best of them. But I didn't miss the sound of an engine nearly as much as I expected.