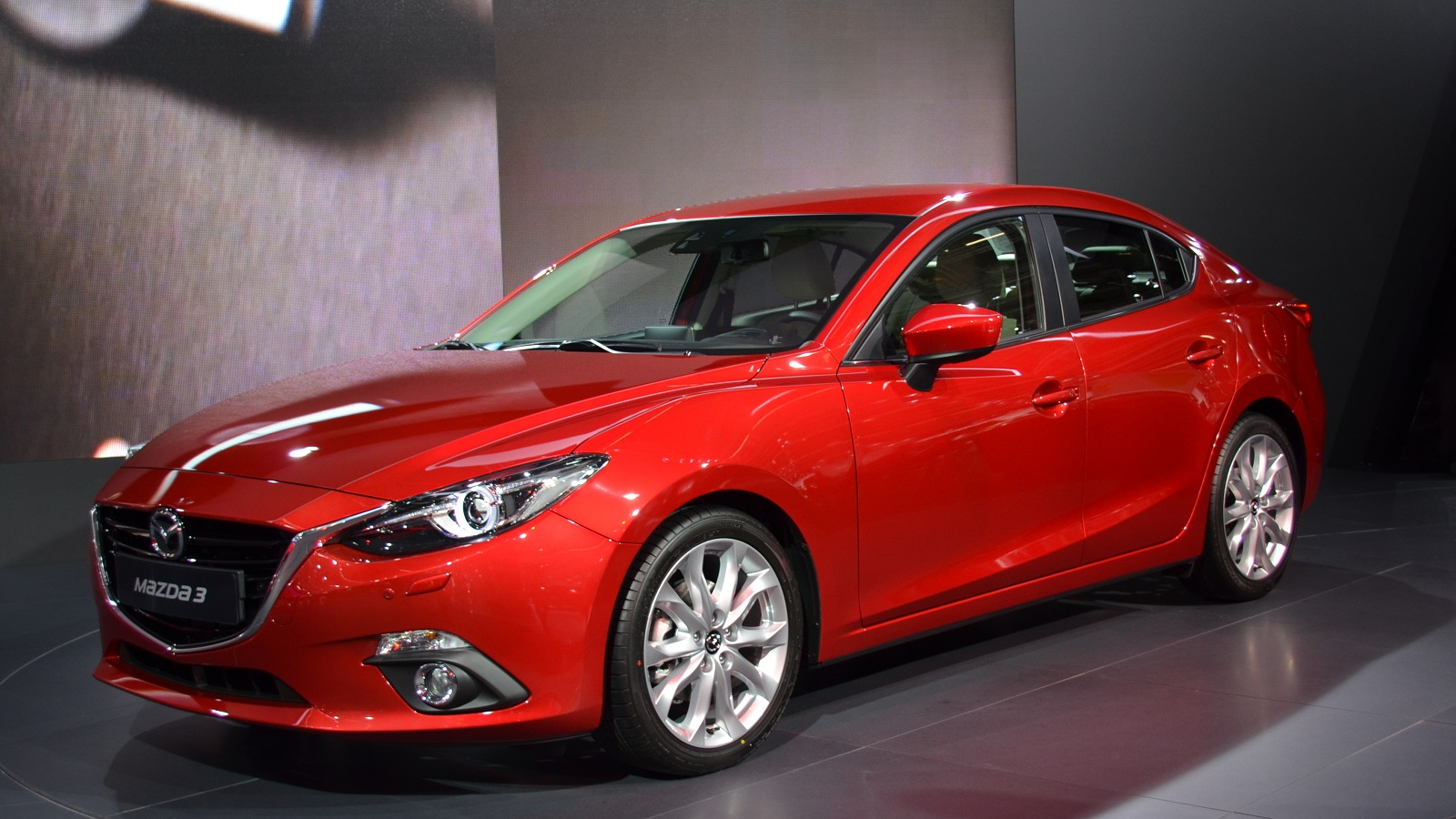 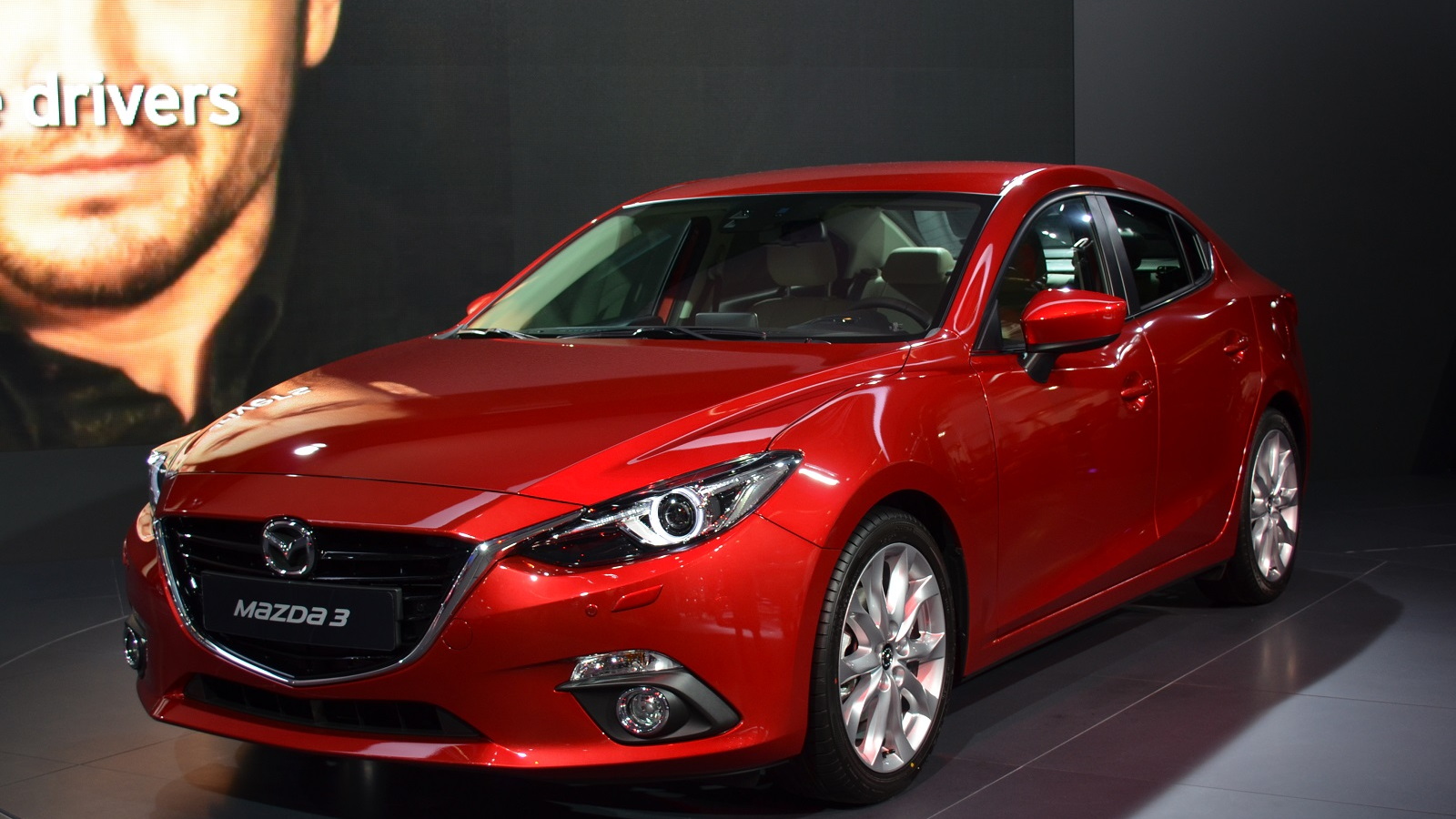 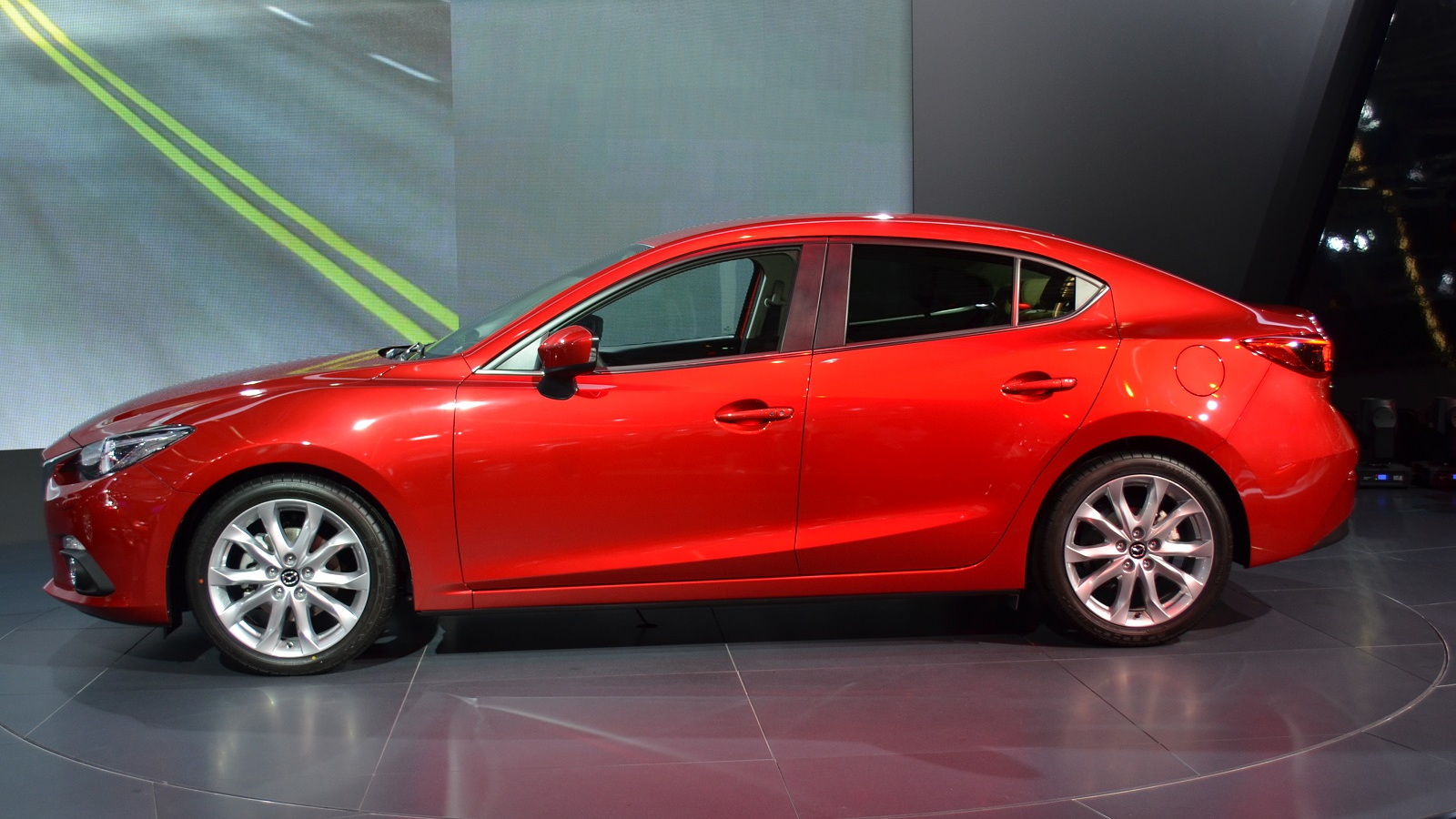 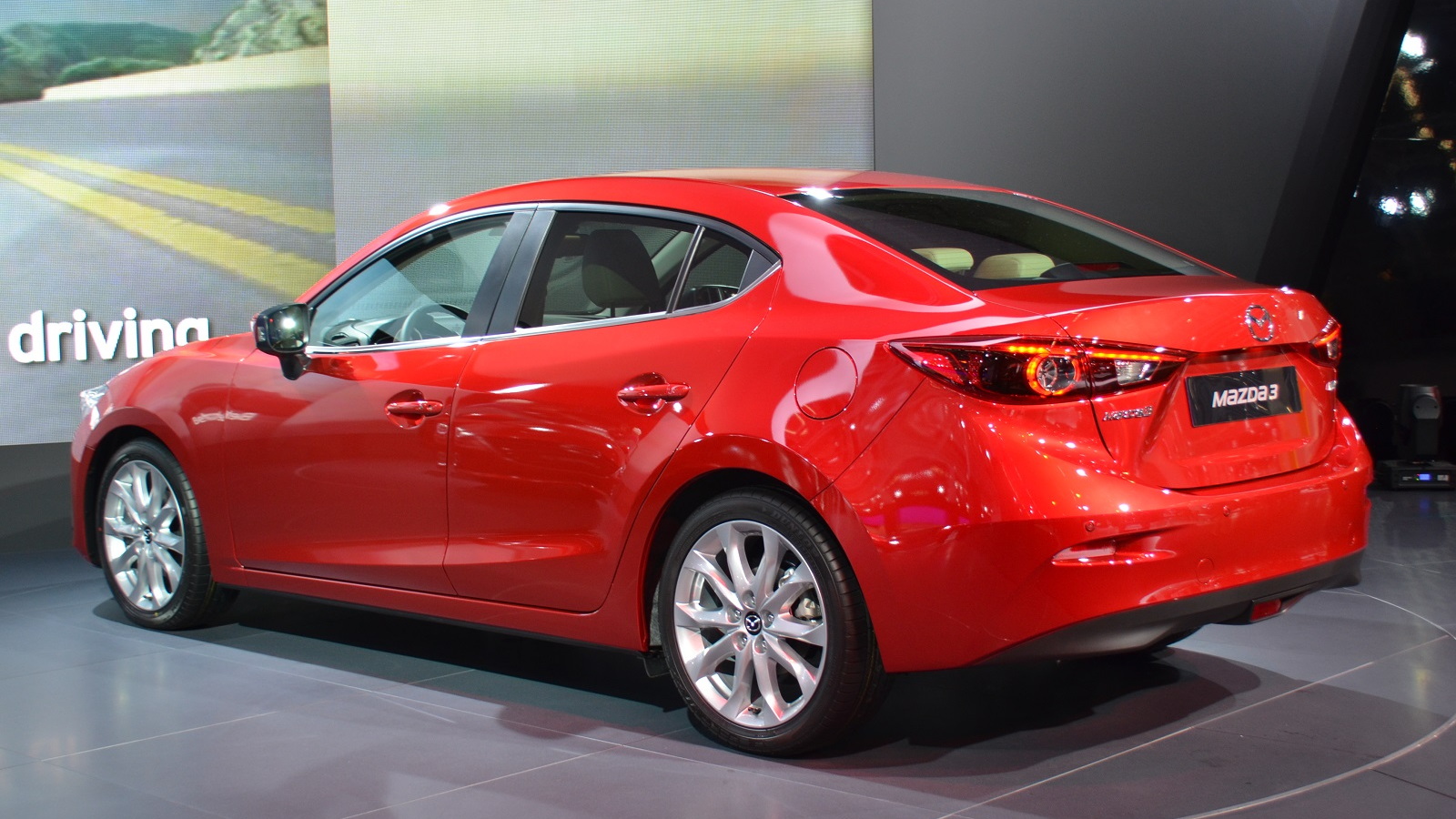 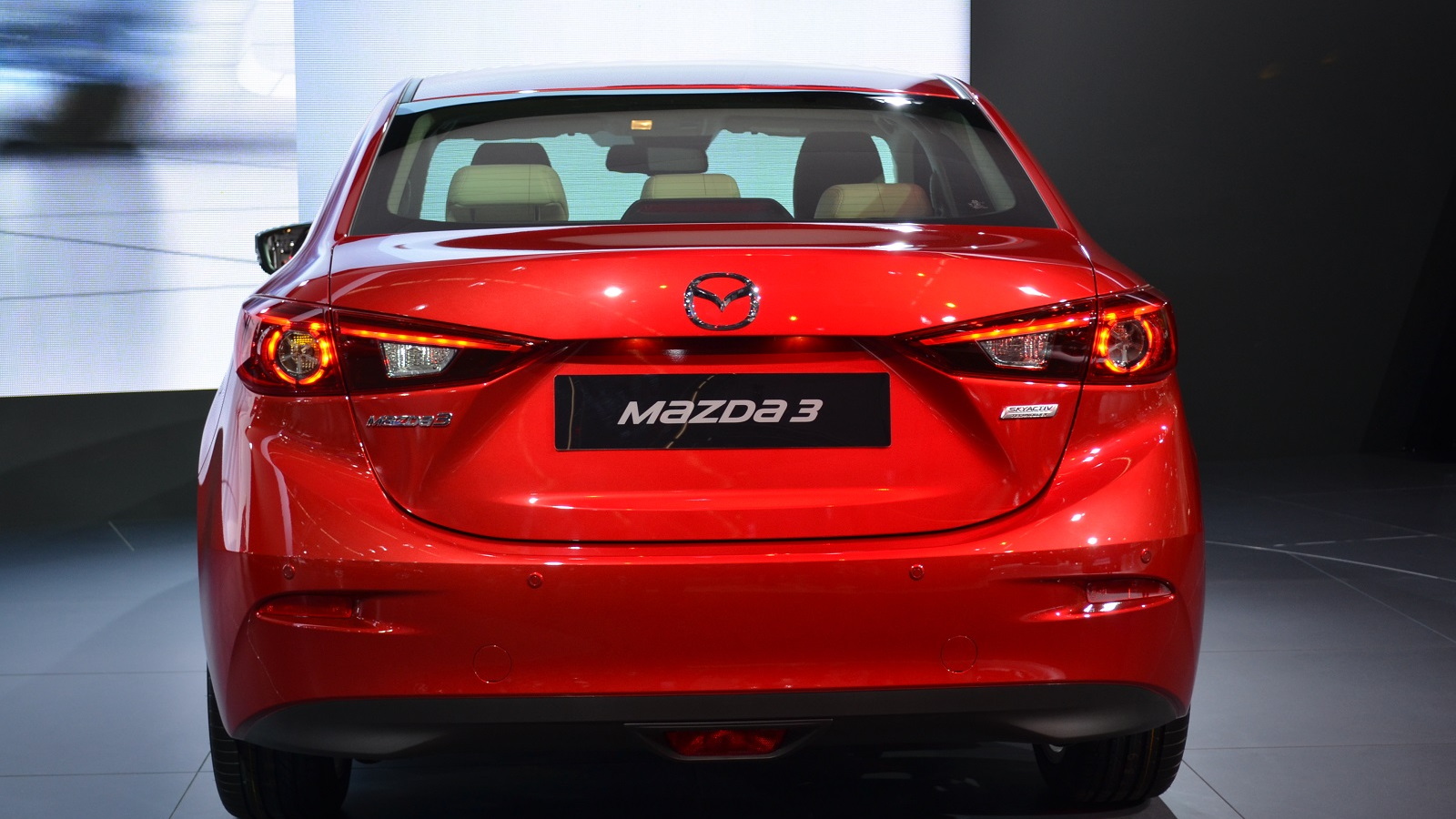 The all-new 2014 Mazda 3 was revealed at the end of June, but only as a five-door hatchback--the model that will be the mainstay in Japan and Europe.

Now we've had our first look at the 2014 Mazda3 four-door sedan in person; it was displayed at last week's Frankfurt Auto Show.

The pictures show the car on its display stand, letting us see what it looks like "in the flesh"---as opposed to only in the photos Mazda released.

The new compact four-door shares the Kodo design language with the 2014 Mazda 6 mid-size sedan, which went on sale early this year.

And to our eyes, it's considerably more graceful than the last-generation Mazda 3 four-door sedan it supersedes.

The two models of the 2014 Mazda 3 are the first compacts Mazda has designed from the ground up for its ultra-efficient SkyActiv powertrains.

For the U.S., two engines will be offered: a 2.0-liter SkyActiv four-cylinder rated at 155 horsepower, along with a more powerful 184-hp, 2.5-liter four-cylinder.

The smaller engine can be paired with either a six-speed manual gearbox or a six-speed automatic transmission; the larger only comes with the automatic.

All other models with the 2.0-liter engine (manual sedan, manual or automatic hatchback) are rated at 33 mpg combined, with their city and highway cycle numbers varying slightly.

Move up to the 2.5-liter engine and the sedan's combined rating falls to 32 mpg combined; the hatchback is rated at either 31 mpg or 32 mpg combined, depending on trim level.

We tested the 2.0-liter SkyActiv engine in a 2012 Mazda 3 sedan, which delivered real-world fuel economy higher than its EPA ratings. So we're really looking forward to testing the all-new compact in either body style.

A diesel version of the Mazda 3, required for other markets, hasn't been announced for the U.S.

Enjoy the photos, which are just one element of our complete 2013 Frankfurt Auto Show coverage.

What do you think of the all-new Mazda 3 sedan? Leave us your thoughts in the Comments below.

[Photos from IndianAutosBlog; used with permission and thanks.]