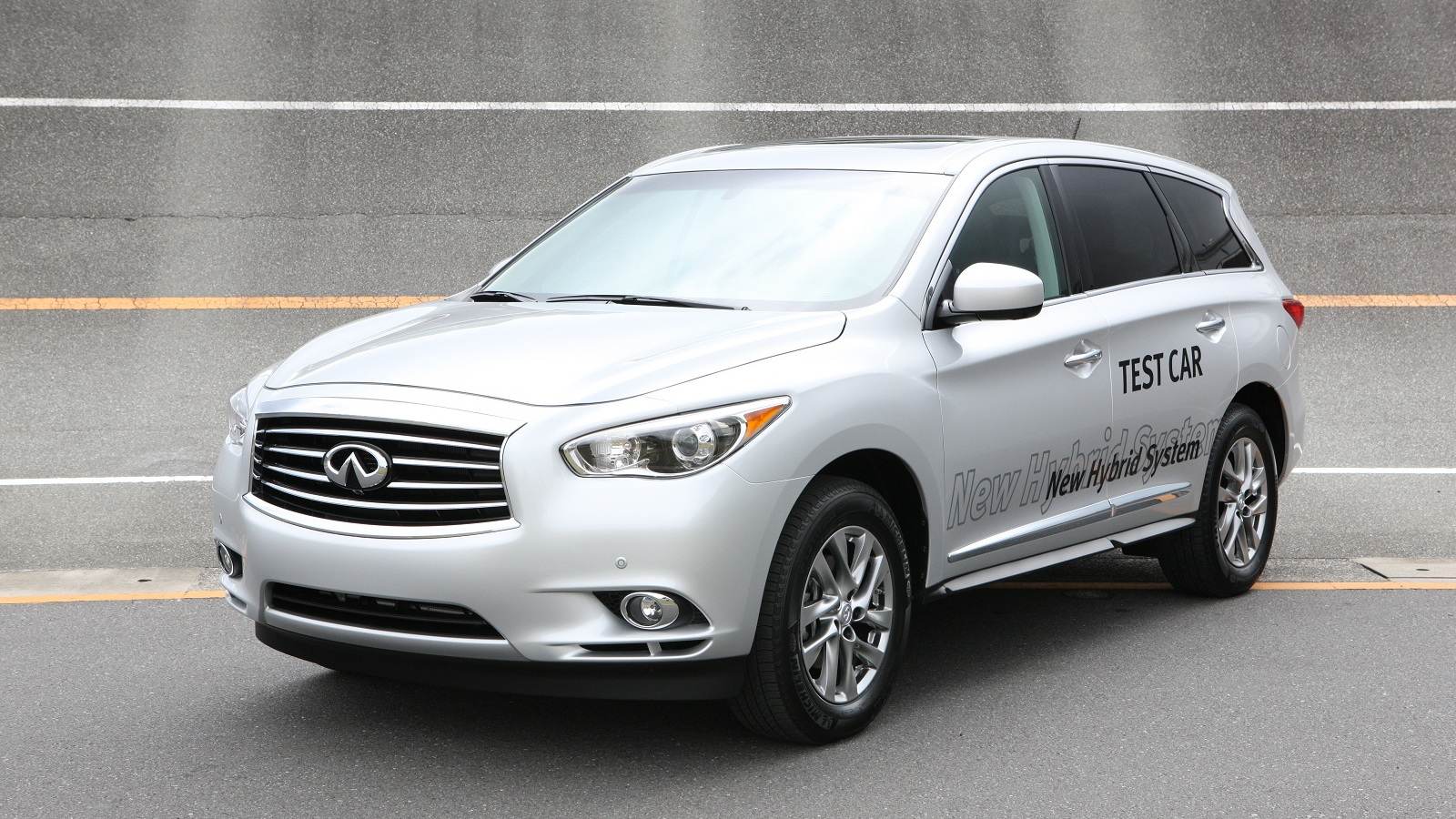 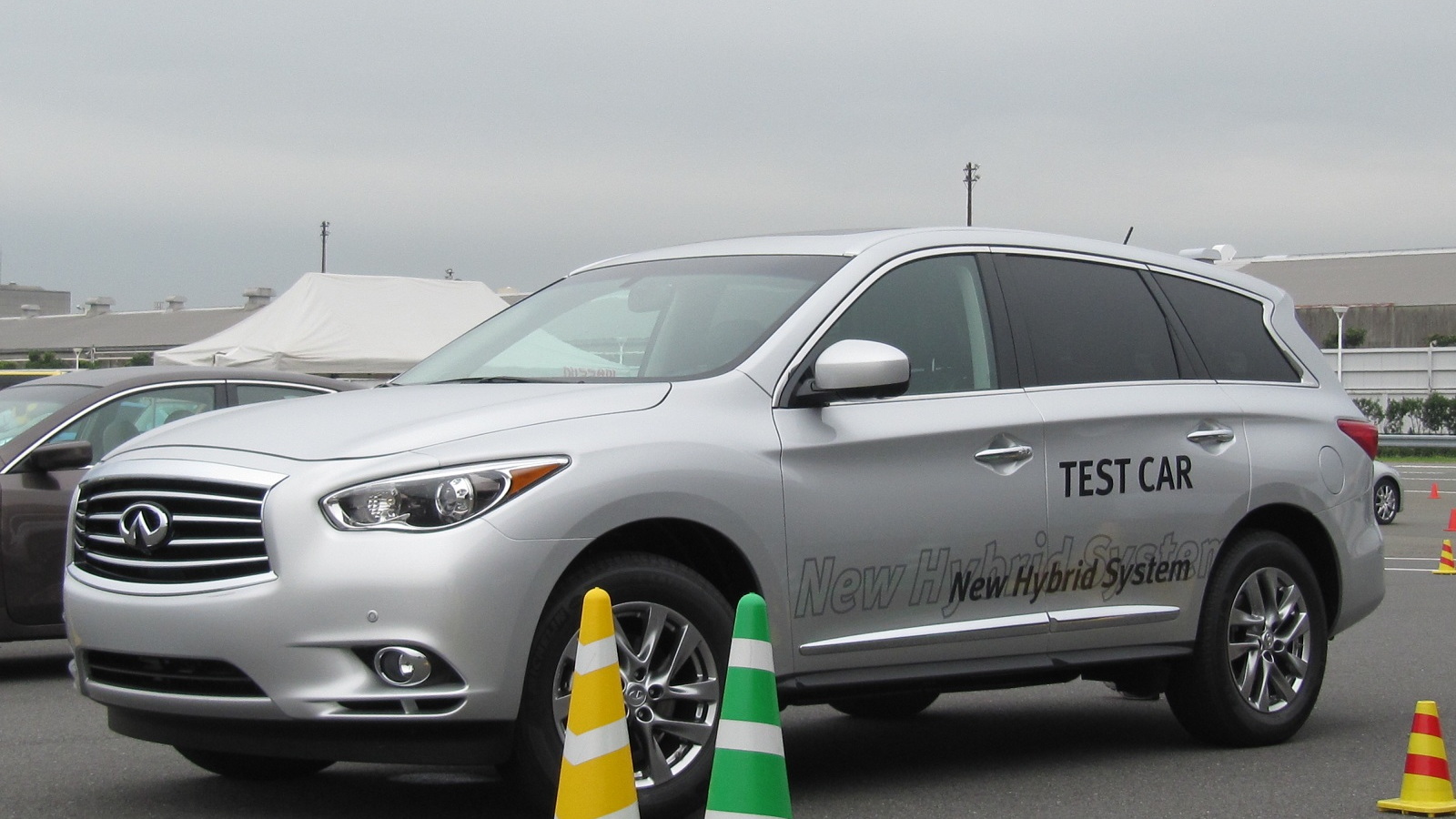 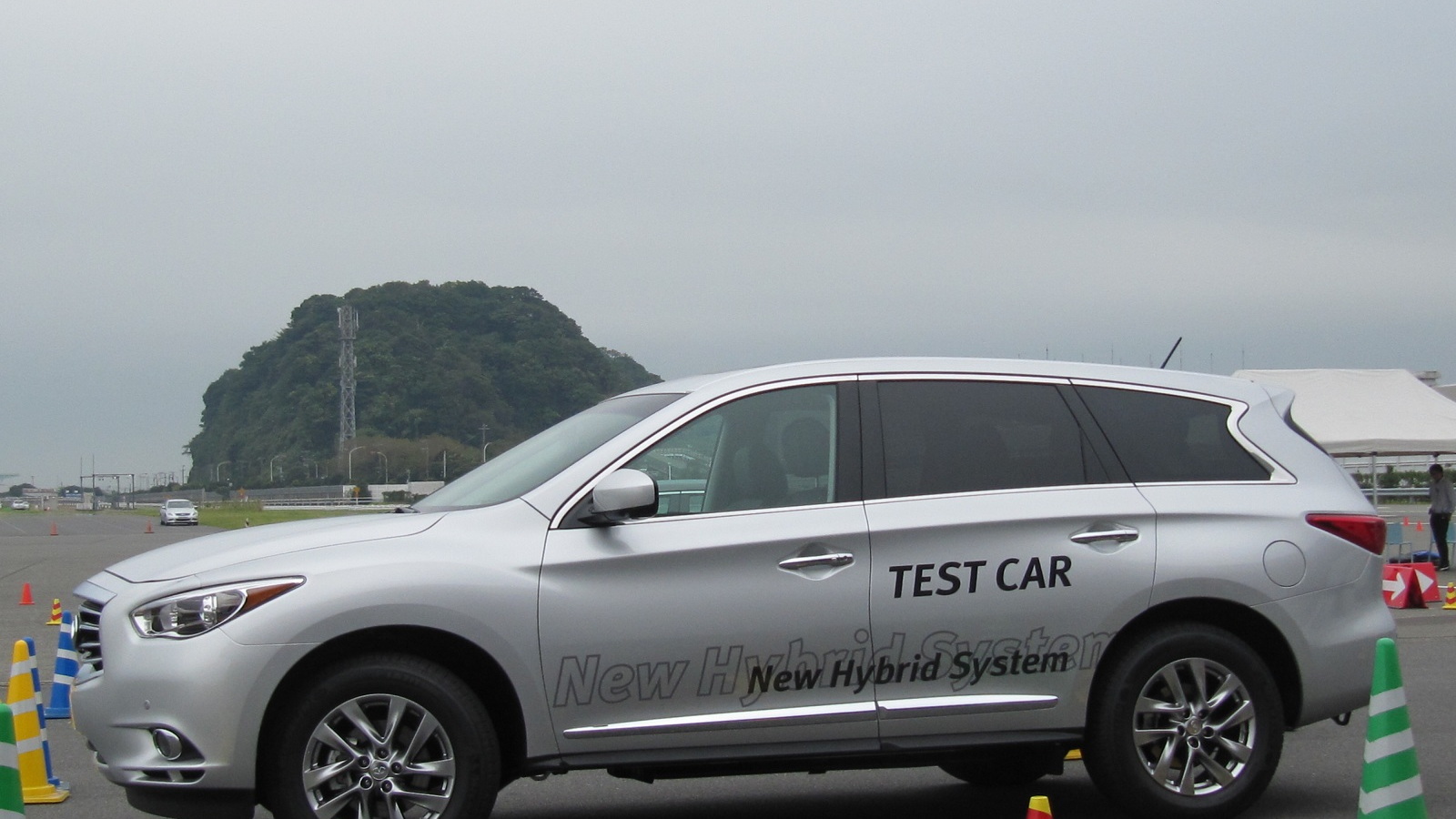 Every carmaker will soon have at least a handful of hybrid models, and Nissan is no exception.

The company’s luxury brand, Infiniti, let reporters drive a prototype version of the Infiniti JX Hybrid it’s expected to launch in the U.S. market within a year or two.

The 2013 Infiniti JX seven-seat luxury crossover competes directly with the well-established Lexus RX, which has long included a hybrid model.

In the prototype JX Hybrid, the company has replaced the conventional model’s 265-horsepower 3.5-liter V-6 with a supercharged 2.5-liter four that’s paired to its single-motor hybrid system.

The electric motor sits between the engine and the company’s latest continuously variable transmission (CVT), bracketed by a pair of clutches that let it provide torque to supplement engine output, or--at least in theory--power the vehicle under light loads by itself with the engine off.

Infiniti showed off the prototype on Wednesday at the Nissan Advanced Technology Briefing, held at its GranDrive facility in Oppama, Japan.

Engineers who demonstrated the vehicle wouldn’t give power outputs or predicted gas-mileage ratings, saying the model was still being tuned and refined.

The Infiniti Ellure concept car shown at the 2010 Los Angeles Auto Show used a 240-horsepower supercharged 2.5-liter four-cylinder engine paired with a 25-kilowatt (35-horsepower) electric drive motor with a clutch on either end.

But the Nissan engineers did say the Infiniti JX Hybrid is likely to use about 20 percent less gasoline than the current V-6 model, which the EPA rates at 21 mpg combined in front-wheel drive form, and 20 mpg with all-wheel drive.

Driving the prototype hybrid JX, it was clear the vehicle came close to its target of “V-6 performance with four-cylinder fuel economy”—at least on the performance end of the equation.

The development prototype JX Hybrid had lively acceleration, and moved out smartly from stops. While engine noise was noticeable, the supercharged four felt somewhat sportier than the V-6. The transmission seemed to be tuned in a way that eliminated the worst of the engine howl that CVTs can produce.

The JX Hybrid prototype had just one thing missing: electric running. Try as we might, on several laps of the Nissan test track, the only way we could get it to run only on electricity was to accelerate up to cruising speed, then lift off the accelerator enough that the car began to slow.

The hybrid JX didn’t seem to be able to maintain a set speed using on level ground using just the electric motor.

And moving away from a stop under electric power alone was impossible—no matter how light a touch on the throttle we used.

One advantage to using a modified version of the company’s CVT is that the transmission has been designed to permit a power takeoff for all-wheel drive—meaning that, like the Lexus RX, the hybrid JX can be offered in both front-wheel and all-wheel drive variations.

The all-wheel-drive JX Hybrid, however, will have all four wheels driven mechanically—like the AWD version of the late Ford Escape Hybrid—rather than using an electric motor on the rear axle as the Lexus does. This may give the AWD system more power in situations like deep mud or boggy ground, where the Lexus rear motor could shut down to protect itself from overheating.

Is it ‘hybrid enough’?

We expect the JX Hybrid to find a ready market among buyers seeking a hybrid luxury crossover—who now have only a single choice, the Lexus RX 450h.

But we wonder whether Infiniti’s seven-seat hybrid utility vehicle will be perceived as “hybrid enough” by buyers familiar with the RX 450h, which can move away from a stop electrically under light loads, and switches off its engine to run electrically often at lower speeds.

While the modified JX is technically a full hybrid, since the electric motor can propel the vehicle under at least some circumstances, it behaves more like Honda’s line of mild hybrids. In those vehicles, the electric motor only adds boost to the engine output, and the engine runs every time the car has to move.

It may be that a Hybrid badge on the tailgate and improved fuel economy are enough to make the model a viable contender.

But the prototype Infiniti JX Hybrid raises a question—how do buyers expect a hybrid to behave?—that will only be answered once it goes on sale.

Infiniti didn’t give a date for the launch of the JX Hybrid, but we wouldn’t be surprised if it arrived about a year from now as a 2014 model.